Just a few weeks ago, I was invited by Covasna County to discover the incredible number of magical things they hide in this region, part of Transylvania in Romania. And after the trip, I got myself really surprised by the wrong idea I’ve been having these past years.

Romania is considered one of the most underrated countries in Europe, and they have reasons to say it!

Even more underrated and undiscovered is Covasna County, a region of Transylvania, also known as The Land Of Mansions. With that name, it was easy to think what I was supposed to find there, but, finding more things than mansions was my first surprise.

The guys from Blue Air were responsible to bring us there, and the conditions of the flights were really interesting, even more for a photo freak girl with all the baggage I’m always carrying.

Keep reading to complete your first 8 reasons to go there, I’m sure you’ll find more!

There are more things than Dracula in Transylvania 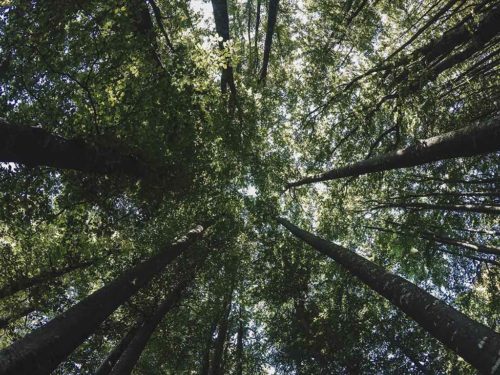 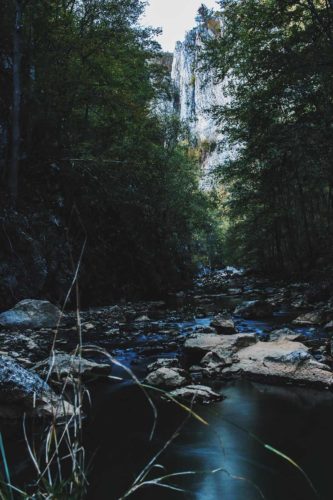 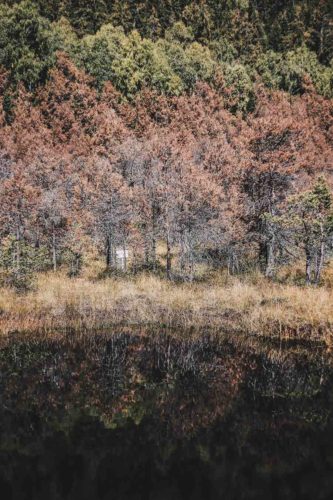 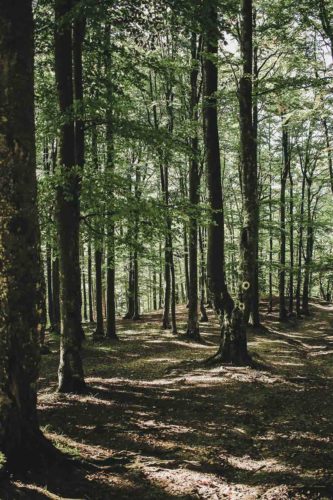 We all have listened about Dracula every year, even more in that time of the year with Halloween around the corner. So, imagine my surprise when I got there and I didn’t found any reference to it!

But you won’t ask for it to the people there, you will not have time to worry about Dracula with all the alternatives you’ll learn.

Covasna County is located in the center of Romania, 4 hours away from Bucharest (one of the cities of Eastern Europe where you won’t get bored). You will need to go across The Carpathian Mountains during the journey, and it’s pretty amazing to see it in the first place.

The council is known because Prince Charles of Wales goes there twice a year, he has there his private natural retreat.

Even more, it’s really good to know some history before going there, you will understand a lot of things. This region was the home of dozens of Hungarians, they were there before and after the communist period, and they all speak Hungarian, there are some people that they even don’t speak fluent Romanian. Those ethnic Hungarians are part of the Székely Land, they have a really deep culture and traditions.

Mansions or Castles, you will love them

When you are talking about Transylvania, you could imagine a land of castles and Dracula, but there’s a difference with Covasna.

Years ago, the noble families had a specific tradition, only the first child inherited the titles and could still be a noble, so their wealth didn’t grow as much as other noble families in Europe.

Following this particularity, castles in Covasna are more alike to mansions. There are more than 160 mansions, some of them became hotels or luxury guesthouses, like The Daniel Castle, where we spent two nights. It’s just incredible sleeping as a noble! 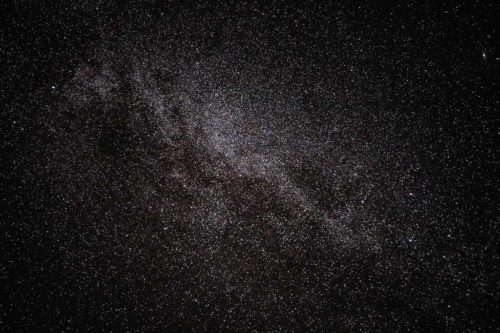 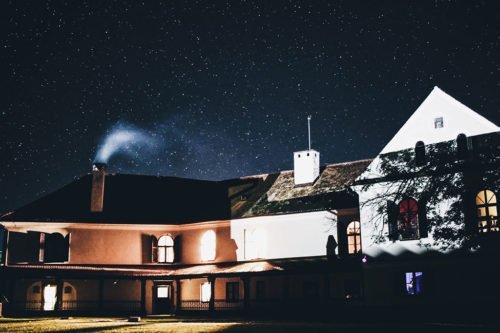 Another incredible aspect was to spend the night seeing the stars and The Milky Way. Living in the city disturbs a lot the way we enjoy these little things, and it’s awesome to do it sometimes.

This castle was the second biggest of the family, but it’s the only one restored as a guesthouse. The biggest one is only a few minutes away, and the surroundings of the mansion are plenty of horses. If you want to visit it, you’ll need to set an appointment, but it worth’s it! 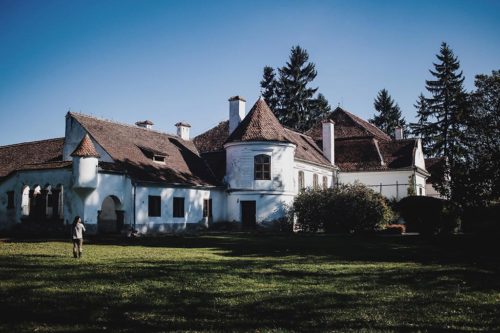 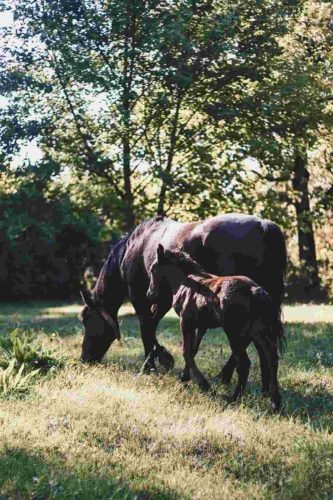 Another gem of the county is the Kalnoky Castle. It’s used as the Musem of Transylvanian Life. Inside there’s a pretty complete collection of things used by the Szekler people. They also offer local activities, felting or cooking as they did years ago it’s a good option to have a great time. 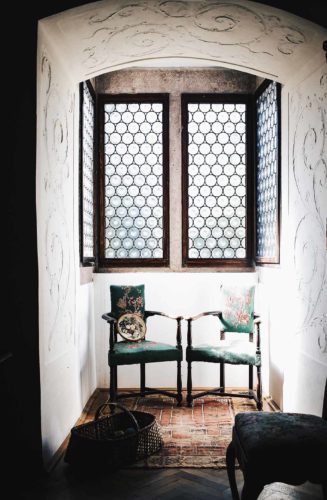 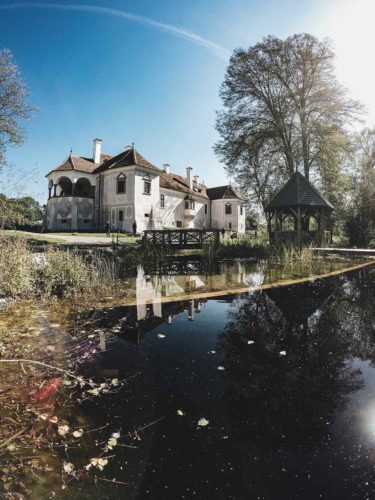 It is very interesting to see how those mansions needed to change over the years, how they were before communism and how they are these days.

There’s a soup for every day

If there’s a good reason to visit a place, their food is placed as an important one. Local food in Covasna is definitely a good point. There are three magical words you will listen more than a hundred times, and you won’t forget about them never again.

Just arriving in the county, you will listen to the first magical word Chimney Cake and in a few hours, it will become the perfect match for your meals.

It’s a dessert made from sweet, yeast dough, of which a strip is spun and then wrapped around a truncated cone. It’s specific from this region, only Hungarian speakers living in Romania do it, so don’t lose your opportunity and try it.

The second magical word is Palinka. This one is even harder to forget. Your meal in Romania (or even in Hungary) starts always with a shot of Palinka. But real Romanians don’t need any reason to drink it, so it’s probably become your nightmare the first two days. Back home, I really miss it! 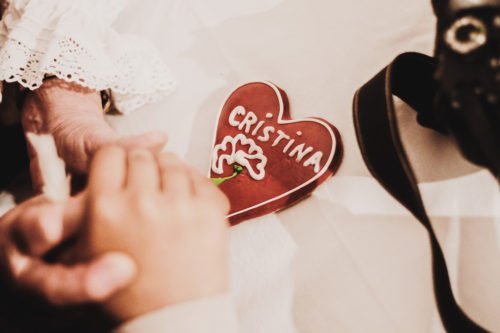 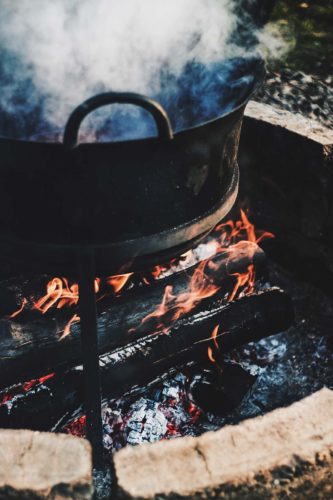 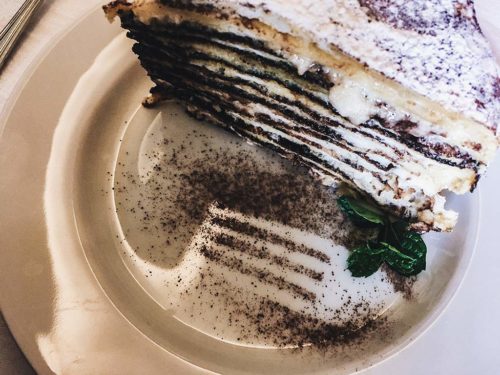 Palinka is made there, and there are different types, made from different herbs.

The last but not least magical word is soup. Everyone knows Romania is quite a cold place in winter (even in summer it’s not so warm for a Spanish person like me!), so there’s always a soup waiting for you as the first plate of your meal. They have an uncountable number of soups, but there are some of them more traditionally common in the region, so if you are a soup lover, this is your place!

Even if those are the three magical words, there are other things to be remembered. If I need to choose just one, I probably will take their bread, made with potatoes.

In Covasna, there is also a tradition of gingerbread. There are authentic artisans of gingerbread, they even offer classes where you will learn to personalize your own gingerbread. It’s a good souvenir!

Road trips are a really fun way of traveling, but here, in Covasna County, you could go even farther.

Roads in the region are not in a really good condition, and it is even more significant when you try to use a specific road different from the main one. 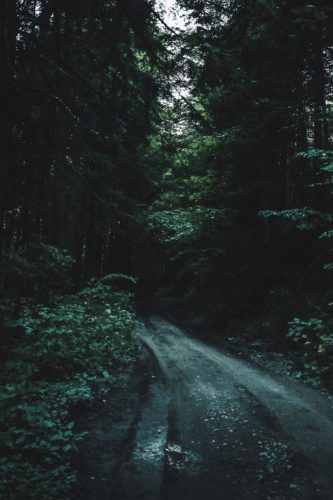 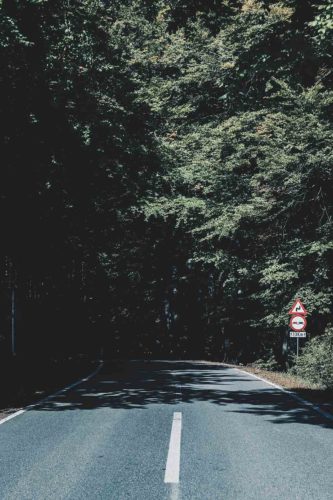 If you are a brave traveler, you would love it. The magic of going somewhere and maybe find an animal, even a bear, on your way, it’s really attractive.

But, if you want to experience something new, you will need to try the horse carriage. A couple of local Romanians will go with you through the fields.

It does not matter the way you move, the surroundings of the way are more than enough to fall in love with this place.

You will learn more than you think

Skélzys are traditional people, if you visit the area, you need to visit a blacksmith doing his job.

Nowadays, they keep the same type of work from the old days. They just decided to introduce electricity to start the fire.

They even do their own tools, because, as they say, if something breaks during a job, they need to know how to fix it and finish the job. They can’t stop the job and buy another tool. 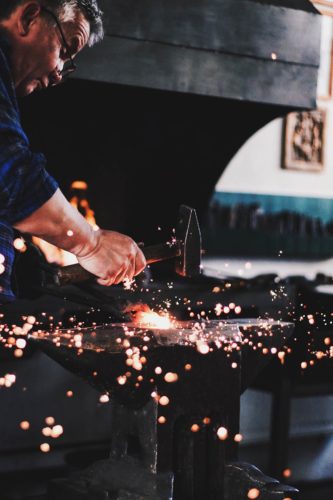 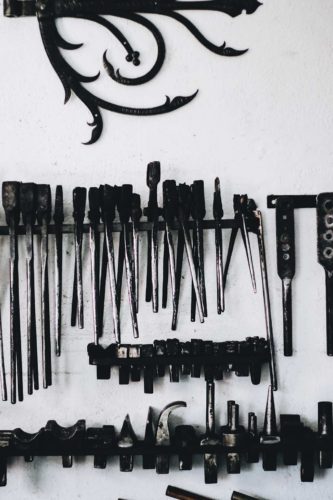 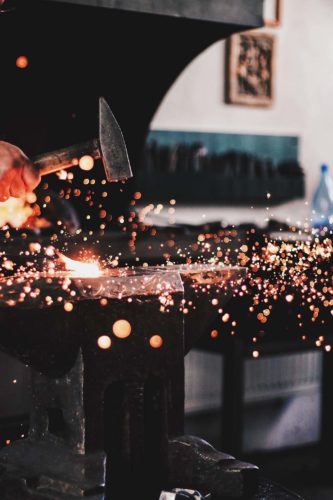 If it is not enough impressive to see how they work, after the visit of the workshop, the local blacksmith will show you their typical after work meal. It consists of bread (typical potato bread) with bacon and red onion. And, as always, a shot of Palinka!

In my opinion, if I need to choose something incredibly awesome about Covasna, I’m sure I would pick nature.

The different types of nature you would find, the diversity of animals, plants, origins… It makes a difference!

I visited the Vârguis Gorge, and I think I can’t write a lot about it, it’s better to see it from my camera pics. 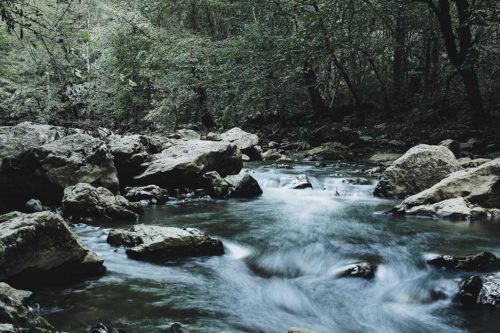 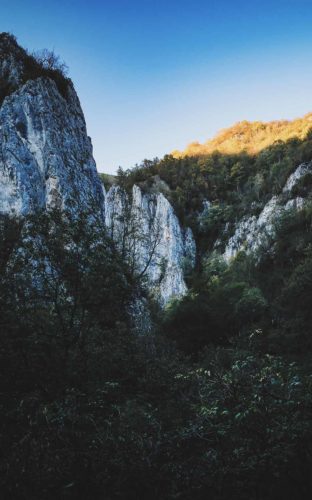 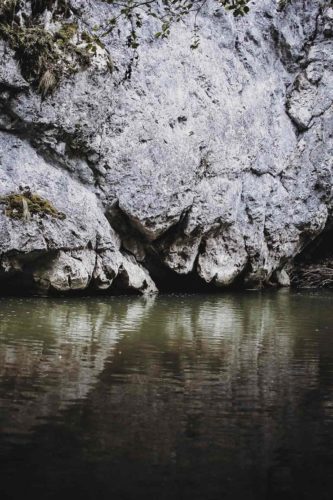 The cave you can see became the first mapped cave from Hungary and Romania. It is said that if you listen very quiet you could hear noises from the other council, so they thought it could be a shortcut and they invest in mapping it.

If you have heard about The Pied Piper of Hamelin, in Romania they believe he brought to this cave the kids he kidnapped in Hamelin. 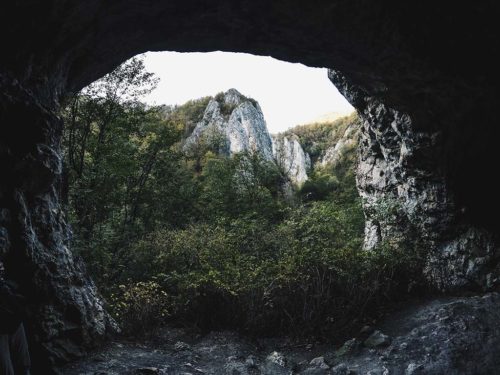 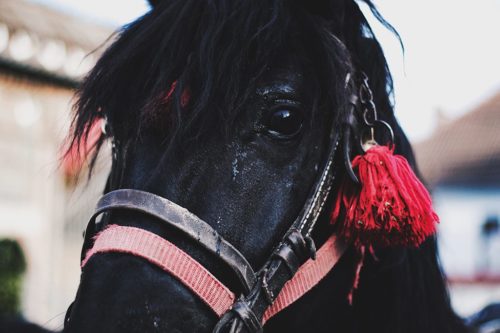 Another curiosity from this region, all the horses you will see wear a red tassel or another kind of accessory. They are very superstitious, and those symbols give protection to the animals while doing their job.

Diving deep enough in the mountains, it is possible to find a good number of brown bears. Seeing them is completely unforgettable, believe me! 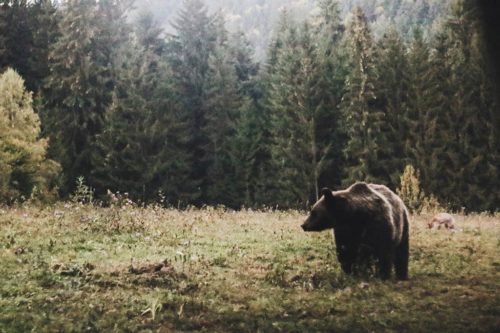 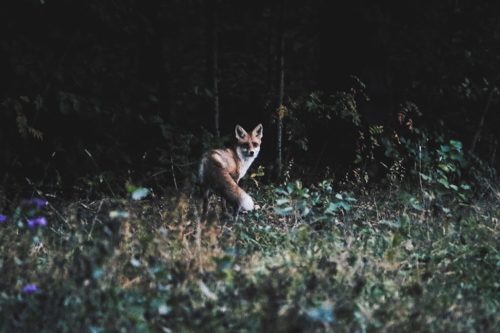 There are all over the Carpathians, you could find them on the road, near your hotel, or wherever you hike. But, if you want to see them closer and safer, there are some observatories made specifically for it (foxes are a really good plus).

A big group of Skélzys is Unitarians. They believe that God is one entity, there’s no person behind its figure. It was born there, the creator started after studying theology. For them, God is inside the souls of the people, it’s not represented by any human being. 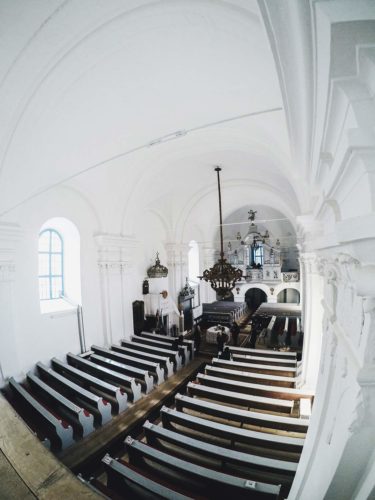 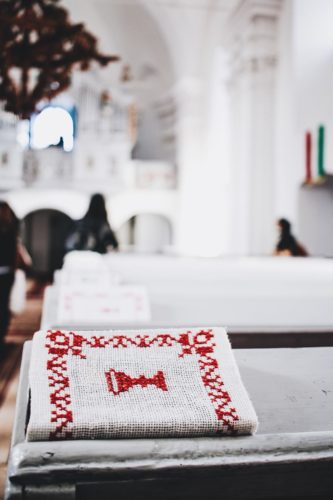 They were the first ones believing and accepting that everyone could believe whatever they want. They don’t have Saints, and in Easter, they only celebrate what Christianism has tough to them.

Covasna is also famous for health treatments in their mineral waters and the mofette. Those mofette represent the final phase of volcanic activity, and it works as a vasodilator, like a dry spa, and their benefits have been used since the 16th Century.

Another good example of the volcanic activity is The Smelly Cave. A cave situated near the Balvanyos Resort. In the interior of the cave, there is a big concentration of sulphuric gas, you realize its effects if you stand there for 10 minutes.

Following your summer Romanian dreams, the best part of Transylvania is Saint Anne Lake, a big volcanic lake, where there was a crater in other times. It’s very good organized, you could have a beer, lunch, or go for a bath and a boat ride. Believe the place is so magical. 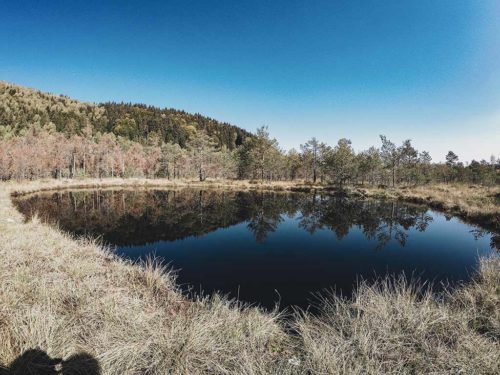 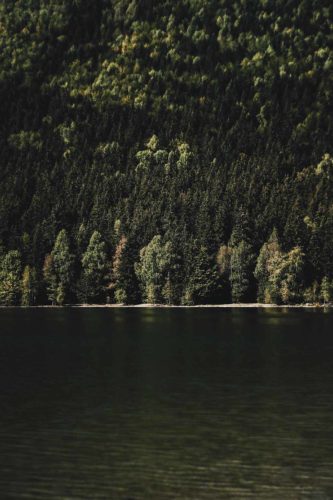 If you are lucky enough, during a summer early morning you could share a bath with a bear!

And what about you, are you planning a trip to the land of mansions?

Tech, filming and photography. If there is a photo to take, I’ll be there sooner or later.