With a vast spectrum of flavors and textures, Vietnamese cuisine has many must-try mouthwatering dishes and foods on top of pho and spring rolls.

As fascinating as it gets, the famous Vietnamese food is key to explore the unique cuisine, culture, and history of the country. Complex, dynamic, full of surprising but never boring flavors, Vietnamese food is a world in itself. Even if you have already tried ‘Pho’ or spring rolls, there are still dozens if not hundreds of other tasteful dishes to try in Vietnam. Keep reading to uncover the most worth-trying and famous Vietnamese dishes.

I. About Vietnamese cuisine and its flavors 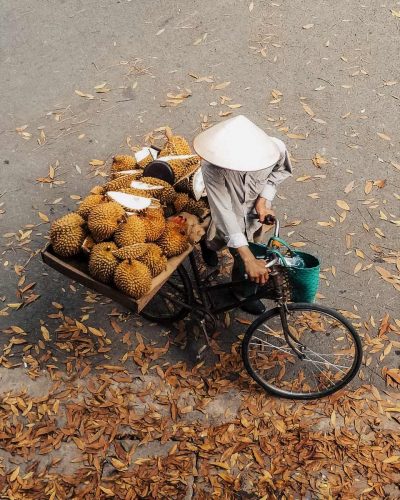 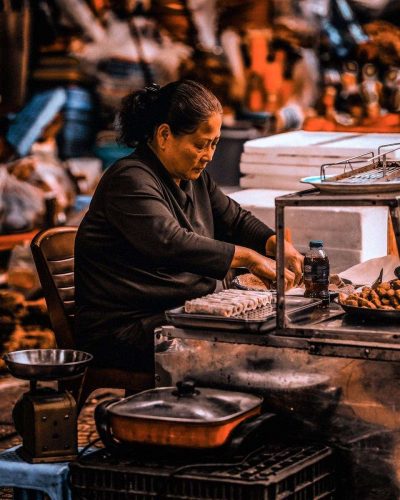 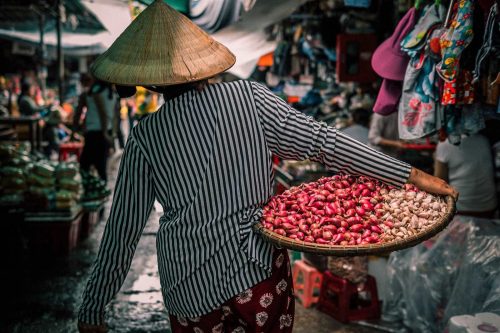 Vietnam was once colonized by the French, which has greatly influenced the country’s cuisine. During this time, the country was divided into the South, the Central, and the North. Since the war was over, there has been a big difference in the culinary style and tastes of each region.

The northerners experience a 4-season climate so they usually use seasonal spices.

Northern dishes have a great balance in their flavors, not too spicy or sweet, nor too bold either. On the other hand, using many ingredients makes their dishes colorful and sophisticated. 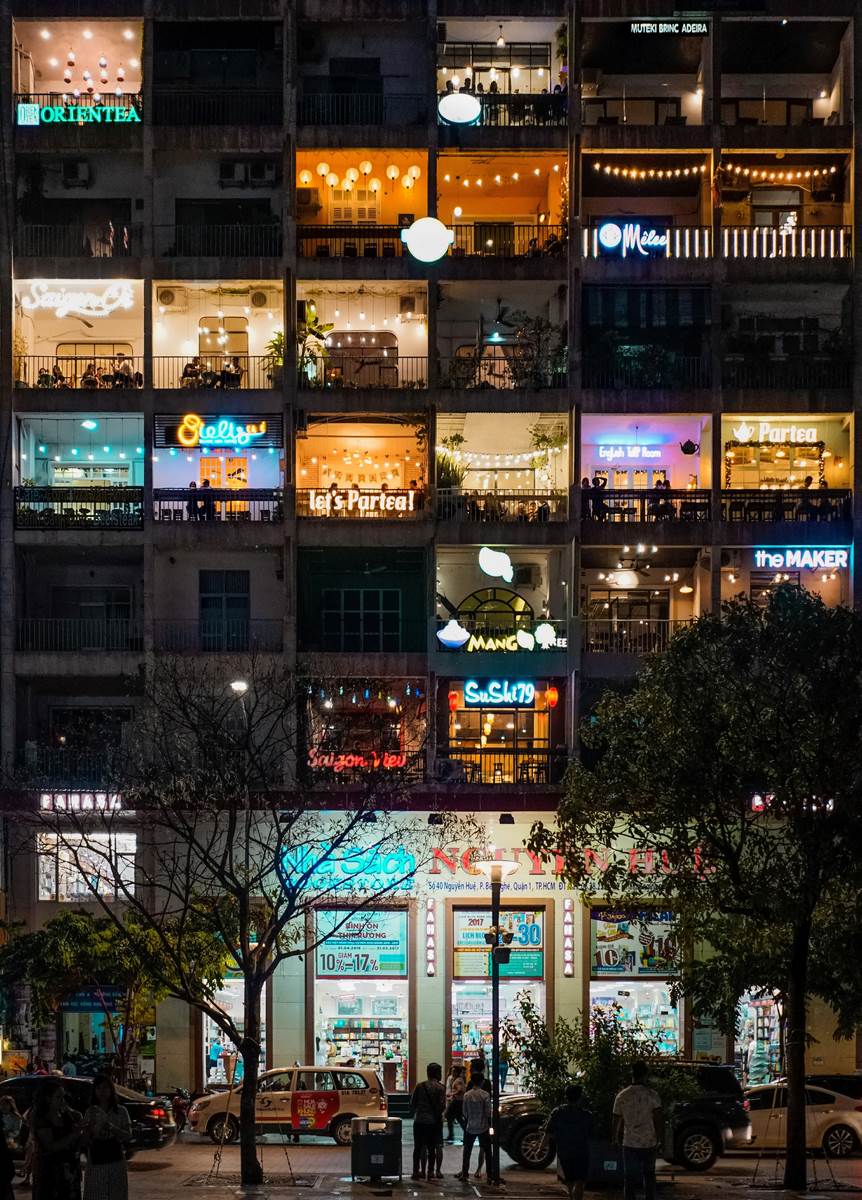 If the North is on your plans, don’t forget to visit Hanoi where the culinary elite can be found.

The spiciness and pungency are remarkable features of Vietnam’s central cuisine. Locals prefer the spicy taste and use less sweetness than southerners. The sophistication of daily meals can be seen in most central provinces.

In Hue, a meal often has many different dishes and adds shrimp sauce to use with other dishes.

Visiting the southern region, you will have a chance to meet honest and subtle southerners and the food here clearly shows the characteristics of the locals there.

Southern cuisine is varied, bringing up an unpredictable transformation with spicy, sweet, and the greasy of added coconut milk. Compared to northern dishes, southern ones are sweeter.

In the heaven of Vietnamese food, choosing a dish for lunch or dinner can be a confusing task. That’s why we have decided to make it easier for you, compiling the top Vietnamese dishes by locals and foreigners.

Any Vietnamese food list would not be complete without Pho or so-called noodle soups. 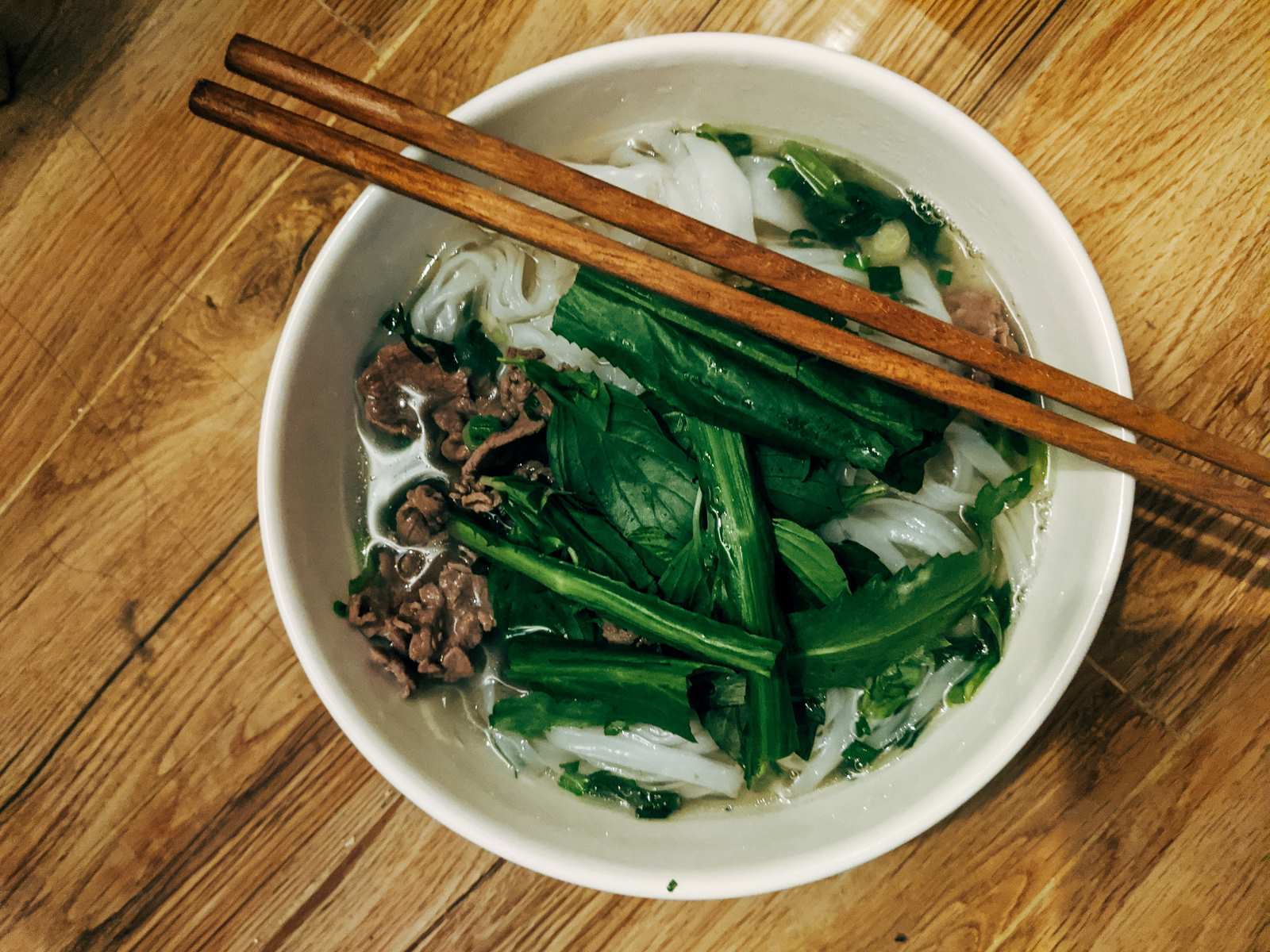 The bowl of Pho looks quite simple, consisting of tasty broth, banh pho (rice noodles), meat, and a few herbs. The dish is primarily served with chicken or beef. Sometimes, you can try it with ‘quay’ – a kind of finger-shaped bagel. Dipping it in the broth, it will bring you a unique and special taste.

In Vietnam, Pho is so popular that it is impossible to walk in a major destination without seeing a crowd of patrons enjoying this dish at a makeshift stand. Cheap, tasty, and widely available at any time, it is famous not only in Vietnam but also in many other countries.

Pho styles vary among cities, differing by the sweetness of broth, choice of herbs, and noodle width but trying Pho in Hanoi – where this dish originated in the 20th century – is a must.

Another world-famous dish, Vietnamese spring rolls are hard to resist. Fresh, light, and flavorful; there are quite a few different versions depending on the ingredients used.

Those include meat, seafood, lettuce, vegetables, and herbs neatly rolled in a small piece of translucent rice paper. Rolling is quite a challenging but exciting task for foreigners and tasting fresh spring rolls with fish sauce – a popular Vietnam condiment – is well worth it.

When you have been indulging in too much Vietnamese fried food, spring rolls are usually a quite awesome and healthier choice.

When visiting Saigon, a big city in southern Vietnam, trying Com Tam – aka Vietnamese broken rice – is a must.

Com Tam is a simple dish with fractured rice grains served with grilled marinated pork chops, thinly shredded pork, tomato, cucumber, pickled vegetables, grilled prawns, and egg meatloaf. As it is a dry dish, most restaurants in Saigon serve it with a small bowl of dipping sauce made from fermented fish sauce and a small bowl of broth on the side. Like most of the dishes in this list, Com Tam is usually customizable and you could, for instance, leave the egg meatloaf out if you want.

This dish can be found in many provinces in Vietnam, but the tastiest version is served in Saigon.

While Pho is preferred for breakfast or dinner, Bun Cha is considered a perfect dish for lunch.

Literally, Bun Cha is Vermicelli with grilled pork. To put it in other words, there will be a dish of soft rice vermicelli served with a bowl of meatballs and grilled sliced pork in special fish sauce. The sauce is probably the most important part to decide whether the dish is delicious or not.

Holding the spirit of the dish, the dipping sauce is a harmonious and perfect mixture of fish sauce, sugar, lime, vinegar, pickled carrot, and papaya. To boost the Bun Cha taste, diners should add some pieces of pepper, chili, and garlic into the sauce.

The great taste of rice vermicelli, unique herbs, tough sliced meat, and soft meatballs will fulfill your stomach in a satisfying way.

And here’s an extra piece of information about Bun Cha: President Barack Obama once tried it with Anthony Bourdain during his visit to Vietnam. 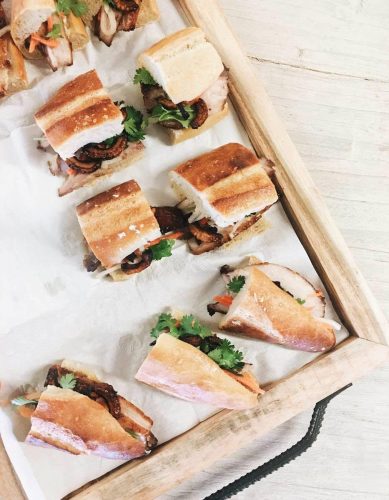 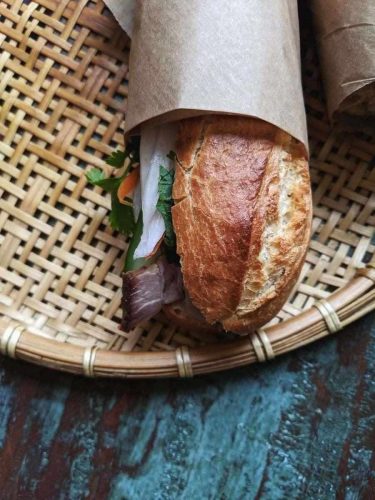 Banh Mi is also known as the best Vietnamese sandwich and considered a symbol of simplicity. Still, it has a great taste.

Convenience is one of the reasons why it has become a very popular dish in Vietnam recently, as you can find a stall selling good-smelling Banh Mi in the streets of favorite tourist destinations easily. Something that makes it a popular breakfast dish for youngsters.

Cooking one just takes 3 minutes, turning Banh Mi in an integrated part in Vietnamese people’s modern life and also a vital dish in any Vietnamese food list. Its popularity is such that, even without ever having visited Vietnam, many people across the world had a chance of trying it.

Local people often put grilled pork, egg, sausages, pate, different kinds of vegetables, a special sauce, and herbs inside a crusty baguette bread. But in case you want to skip an ingredient or two, you can always ask sellers to leave those toppings out.

In any case, its surprising taste tends to impress people the first time they try it.

Cao Lau is a traditional dish that you shouldn’t miss on your trip to Hoi An ancient town in Central Vietnam.

In spite of having a Chinese-like appearance and a really different taste to any other Vietnamese dishes, Cao Lau should not be considered Chinese food even though its origin remains a mystery today.

It consists of signature noodles, pork crackling, some slices of barbecue pork, lettuce, bean sprouts, and herbs. It is hard to find this dish in other Vietnam cities as the water used for Cao Lau must be from a nearby well dug by Cham people. Likewise, some other ingredients to make this dish are also sourced from surrounding villages. So we could say cooking Cao Lau involves quite a process.

Nowadays, not too many Hoi An families can produce this dish in a traditional way and the quality is not what it used to be. However, it is still a good Vietnamese dish to try in the country’s central region.

Related: Best countries for food in the world

Cha Ca, the aroma of the old capital, is another unmissable dish on the list.

Hanoi is an ancient city with unique traditions and exquisite delicacies. A special taste of ‘Cha Ca’ contains a lot of its culinary essence. After trying it, you will be impressed by its sort of elegance, sophistication, and unforgettable flavor. Cha Ca simply translates to braised/ grilled fish, but this name seems not enough to describe the complexities of the dish. 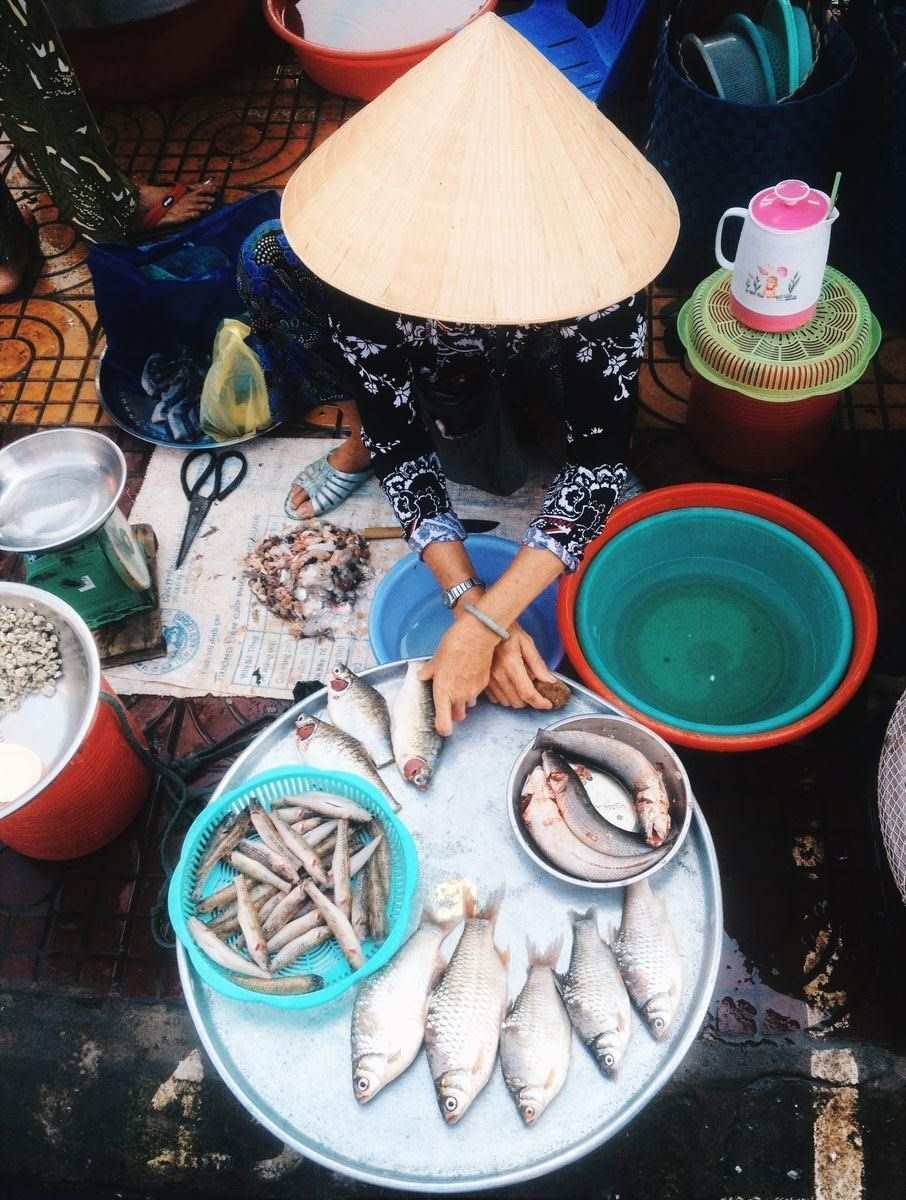 The fish must be caught from the river, then it is marinated with turmeric before being fried with scallions and dill. Mind you, it goes through a couple of frying rounds: the first one by the chef, and the second at the dining table with some additional ingredients to bring up its flavor.

Mentioning Cha Ca, it would be a miss if not talking about ‘Cha Ca La Vong’ – a century-old specialty in northern Vietnam. When trying this kind of grilled fish, diners should eat straight from the pan for an enriching dining experience.

Insider tip: To get to know more about the specialties of Vietnam, especially the grilled fish (Cha Ca), you can join in a Hanoi culinary tour named the Hanoi half-day cooking tour with a master chef, which gives you a chance to make Vietnamese authentic food by yourself. 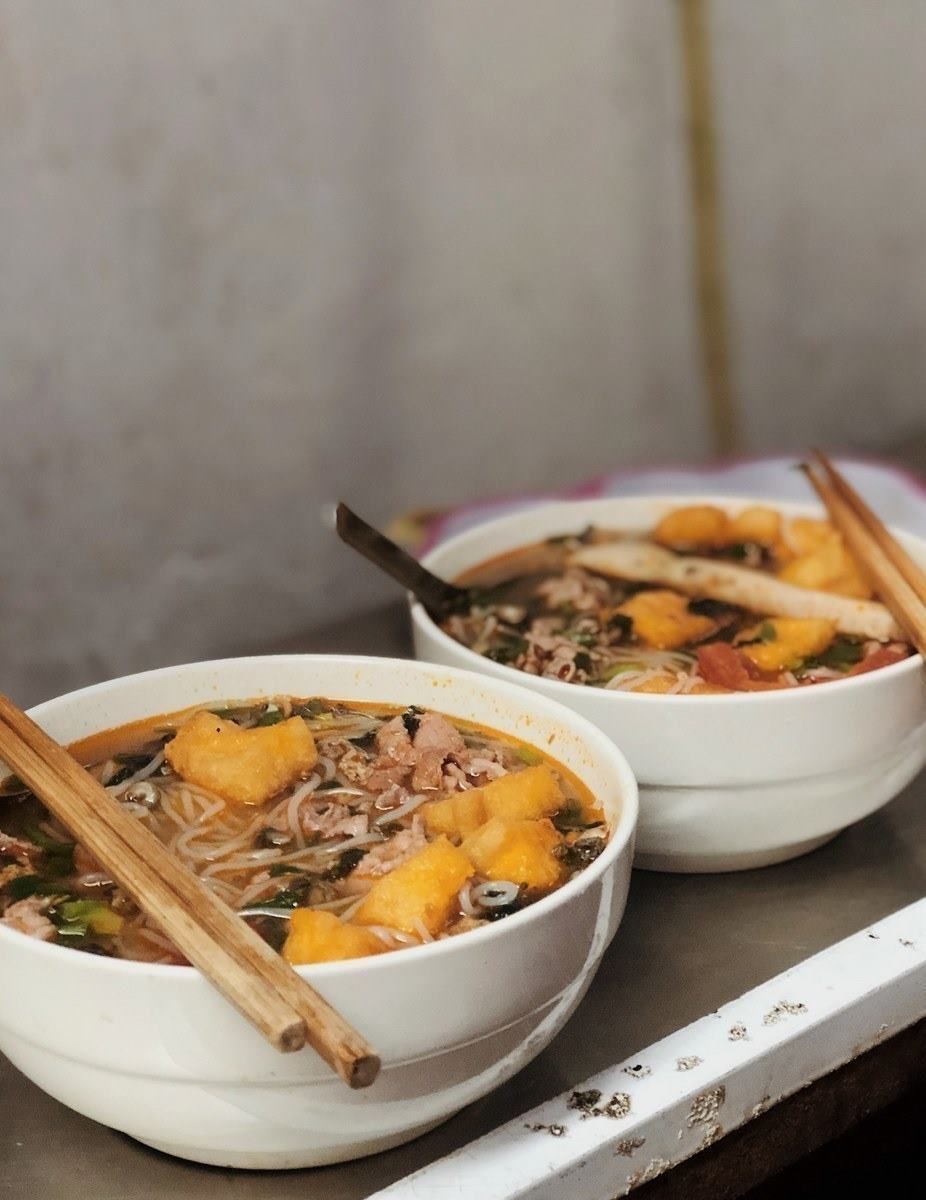 While ‘pho’ is an iconic dish of Hanoi, ‘hu tieu’ is a symbolic noodle dish of Saigon – the biggest city in southern Vietnam.

Both noodles come from rice, but noodles in ‘hu tieu’ are thinner and chewier. Besides, ‘hu tieu’ adds shrimp, pork, crab meat, and bean sprouts to its list of ingredients. In some restaurants, you also can find beef meatball in the bowl of ‘hu tieu’.

Like ‘pho’, there are many versions of this dish and occasionally squid or dumplings can be found. And, you can choose the ‘dried’ version instead of the ‘wet’ one also. Don’t worry about feeling thirsty as a dried bowl is often served with a small bowl of soup and fresh vegetables on the side. And worry not, this version isn’t flavorless or less tasty than the wet one at all, because the chef mixes noodles with a special sauce.

Inexpensive price also leads to the popularity of ‘hu tieu’ in Saigon.

Banh Xeo, simply called sizzling pancake in English, is on the list of must-try dishes in Vietnam.

Your journey to central and southern Vietnam would be incomplete without trying this favorite dish by both locals and tourists. There are many stories around its origin. But, most people believe it was introduced by Khmer in the South a long time ago.

No matter when it originated, it is still the best choice for snack time. Depending on the region, the sizzling pancake can be cooked and eaten in different ways. However, the flour batter is always its main ingredient and the dish is served with dipping sauce and some kinds of vegetables and herbs.

The flour batter mixture is spread thinly on the hot fired wok. Pork belly, whole prawns, mung beans, and bean sprouts are stir-fried before pouring the batter over the fillings. The folded halfway pancake is placed on the plate, served with vegetables like lettuce, fish mint, perilla, and many more.

Related read: 6 Awesomely Easy Tips For Starting A Vegetable Garden On A Budget

The dish is famous for the balance of salty, sweet, sour, and spicy flavors. In Hue – the former capital of Vietnam, locals prefer having a bowl of Hue beef noodle soup for breakfast rather than lunch or dinner. The broth is so wonderful, made by simmering pork bones and beef bones with onion, shallot, lemongrass, and ginger.

Apart from rice turmeric, you also can find some slices of pork meat, beef shank, and pig’s feet on your bowl. Sliced onion and spring onion on top make the dish look both eye-catching and mouth-watering. 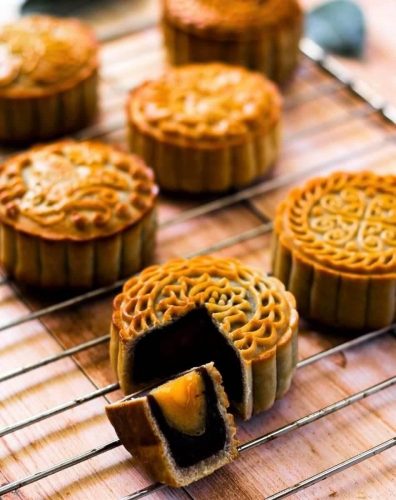 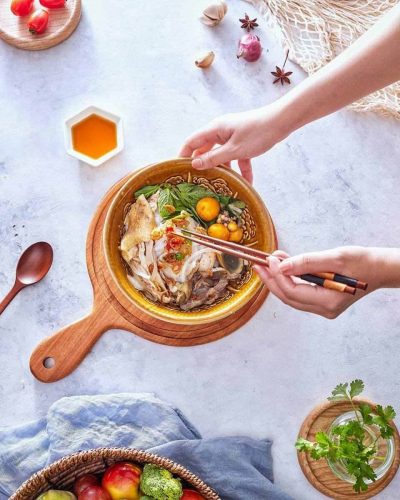 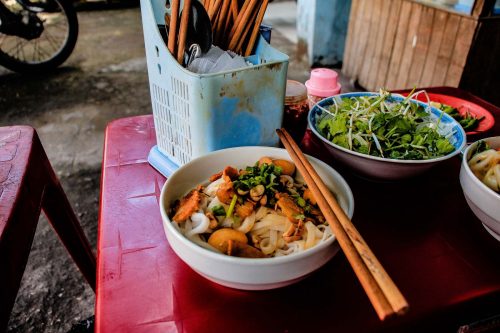 Besides the above famous and delicious Vietnamese cuisine dishes, there are also many other delicacies to try in this beautiful country. We hope that you have enough time to try tasty food in Vietnam and discover this huge part of the country’s culture. If you have any memorable moments on your trip, don’t forget to share them with us.

About the author: Jane Pham is a passionate travel writer at Vietnam Discovery, where travelers to the country can find A-Z guides and tips, as well as highly tailored and responsible travel tours. 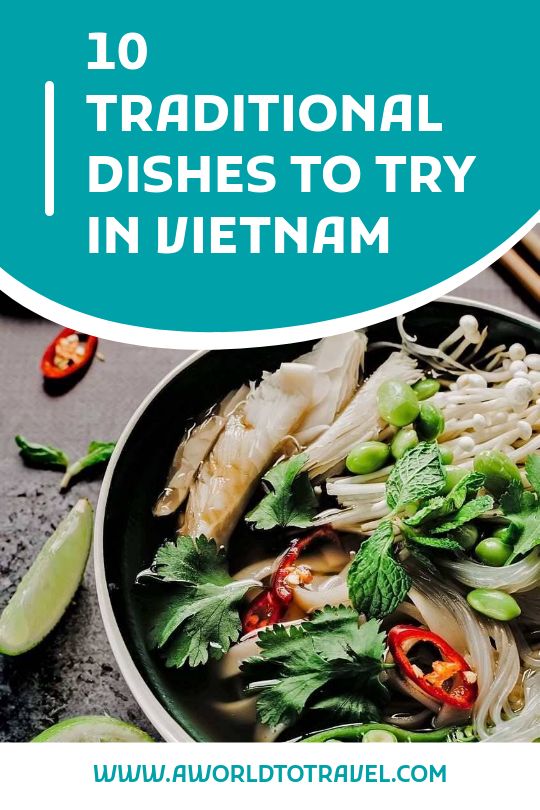