5 Uzbekistan Cities That Should Be On Everyone’s Bucket List

Most people probably couldn’t tell you much about Uzbekistan. I’ve been traveling the world for a living for over eleven years now, and even my knowledge about it was limited. The most I knew about Uzbekistan as I boarded my flight was its location and that much of it is a desert. Upon arriving, I quickly learned that the country is quite diverse and beautiful and that there are many Uzbekistan cities you must visit.

This landlocked country, nestled between Kazakhstan, Turkmenistan, Afghanistan, Tajikistan, and Kyrgyzstan, is very much a hidden gem in plain sight. With five UNESCO World Heritage Sites within its borders, Uzbekistan is a treasure trove for history buffs. Four of them are located in Uzbek cities, each of which has a different feel than the last. As I explored the cities, I also dove deep into the cuisine and culture and came across some of the friendliest people I’ve ever met in my travels. These are the five cities in Uzbekistan you must visit. 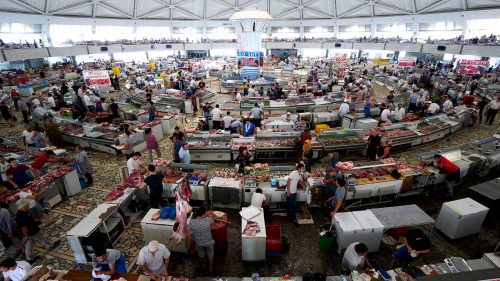 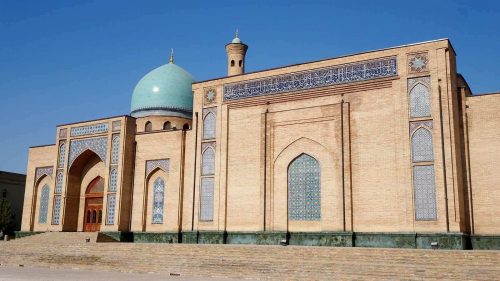 Let’s start with Tashkent, the country’s capital and largest city, located in the northeastern part of the country near the Uzbekistan-Kazakhstan border. While it boasts a rich, 2,200-year history, I learned that most of its past was lost during the Soviet era in a devastating 1966 earthquake. The Soviets rebuilt the city in their signature style, which is why modern-day Tashkent has lots of wide streets, large plazas, and apartment blocks.

There’s a lot of beauty there, and the Soviet influences are apparent the moment you arrive. I couldn’t help but marvel at the stunning, Soviet-style architecture rising around me.

Because one of the few things I knew about Uzbekistan is that much of it is desert, I was shocked at how green Tashkent was. There is lots of vibrant greenery, which helps make the city feel like a beautiful oasis.

Speaking of the streets, Tashkent is also very much a driver’s city. There is a metro system, but if you want to get around, you’ll need to use a car. I arrived at my favorite location in Tashkent, Chorsu Bazaar, by car.

I love exploring bazaars when I travel, and Chorsu has to be one of the most unique I’ve ever set foot in. It’s a massive bazaar with a distinct old-school feel. You’ll find vendors selling various types of meat—everything from sheep to beef to horse—on the bottom level, while the second level is more for foods like nuts, dates, and sweets.

I also highly recommend trying the local dishes, including the national dish, plov. This savory rice, horse meat, carrot, and onion dish has many varieties, and this kind had my mouth watering with each bite.

Another fantastic Uzbek dish is a savory, meaty pastry called a somsa. Somsas are baked in a large, open oven called a tandoor. They’re very similar to Indian samosas and also reminded me of empanadas.

As a history lover, I couldn’t miss the oldest extant Quran in the world at Telyashayakh Mosque. There’s also a museum dedicated to Amir Timur, who founded the Timurid Empire in the 14th century, which is a great way to learn about Uzbekistan’s history. I also suggest a visit to the 16th-century Kukeldash Madrasah, an Islamic educational institution that was built around 1570. In its history, it has served as an inn, a fortress, and a museum!

Tashkent’s uniqueness makes it a city in Uzbekistan you must visit, but also makes it quite different from the other cities on this list, like our second city, Khiva. 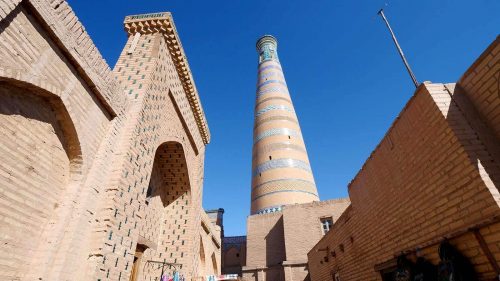 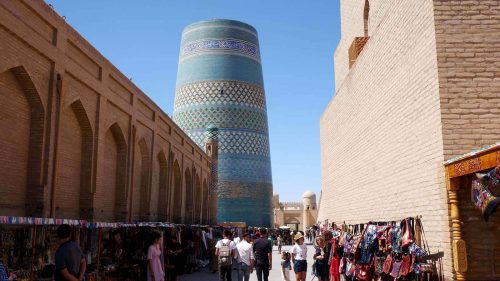 I mentioned earlier that Uzbekistan is heaven for history lovers, and the city of Khiva is one of the reasons why. It’s located in northwestern Uzbekistan and is a whopping 14 hours away by car. However, you can cut the travel time to just one hour if you choose to hop a flight instead.

Khiva is an ancient, historic city that was founded almost 2,500 years ago. It’s one of the few living, walled cities I’ve ever visited, where everything inside the wall is old but still serves as a functioning, livable city. The walled inner city, Itchan Kala, is a UNESCO World Heritage Site. It’s not very big, but there are tons of fascinating sites packed into the small area.

One of my favorite spots in Itchan Kala is Kalta Minor, an incomplete minaret that gleams turquoise under the hot Uzbek sun. Even unfinished, it’s a marvelous example of Uzbek architecture, with its wide base and impeccable blue tiling. I also recommend visiting Juma Mosque, a 10th-century house of worship that boasts the tallest minaret in Central Asia. Climb to the top and feast your eyes on Khiva from 33 meters off the ground!

I’m a massive Disney fan, so I couldn’t help but feel as though I had been transported to the set of the Aladdin movie starring Will Smith as I explored Khiva’s ancient streets. You’ll likely get that same feeling as you explore Khiva’s markets, where you’ll find silk workers and incredible artisans making gorgeous wood carvings.

This city was once one of the most important cities along the Silk Road, which connected Europe with Chinese cities like Suzhou. It is now one of the five cities in Uzbekistan you must visit because of its remarkable history. I was blown away by it, and I believe you will be, too. 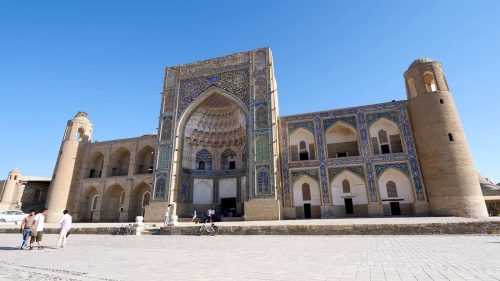 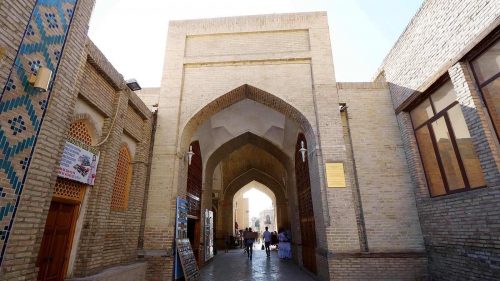 Like Khiva, the city of Bukhara was another vital center along the Silk Road. Because of its location, Bukhara became a hub for culture, trade, and religion. It also grew into one of the world’s most highly-regarded Islamic intellectual centers, second only to Baghdad.

After a 40-minute flight from Khiva, I was on the ground in Bukhara and ready to explore. Of all the Uzbekistan cities you must visit, Bukhara has the most prominent crafts scene. If you’re looking for unique Uzbek souvenirs to take home or to give as gifts, there’s no way you’ll walk away from the city’s bazaars disappointed.

You’ll find everything from workers creating intricate silk carpets to beautiful jewelry to hand-crafted knives. Don’t miss out on the metalwork, which utilizes lots of brass and copper. As you browse, you’ll see ornate padlocks made into the shapes of animals, as well as colorful, decorative plates that cost less than $10 U.S. each!

Like Khiva, Bukhara is a UNESCO city, and most of the attractions are relatively close together, which makes it a very walkable city. You can’t miss the Kalyan Minaret, which is also known as the Tower of Death because of legends that convicted criminals were thrown from the top. Check out the Magok-i-Attari Mosque, which is one of the city’s oldest surviving structures and was rebuilt multiple times. You also should not leave without visiting the Ark of Bukhara, a 5th-century fortress that now serves as a museum.

There are over 140 notable historical sites in Bukhara, including countless mosques and madrasas. Their architecture alone make Bukhara a city in Uzbekistan you must visit. I couldn’t get over how beautiful and vibrant some of the madrasas were. Words don’t do them justice; you have to see them for yourself. 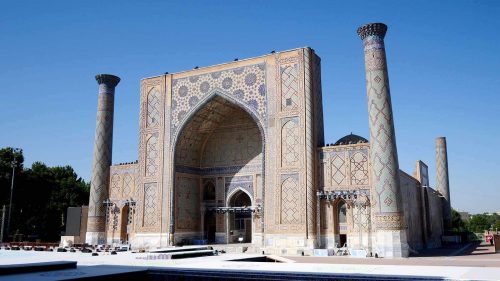 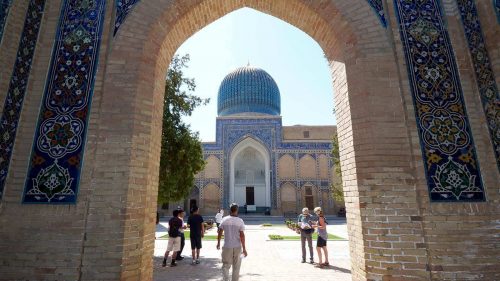 From Bukhara, take a trip down to southeastern Uzbekistan to visit Samarkand, known as the Crown Jewel of Uzbekistan. It’s one of the most continuously-inhabited cities in Central Asia and was once considered one of the region’s greatest cities.

I arrived after a 90-minute train ride from Bukhara and immediately hit the ground running. I noticed that its layout is quite different from that of Khiva and Bukhara, where all of the notable sites are pretty close together. Samarkand is much more spread out, so you’ll have to take taxis to get around. Luckily, the taxi rides are inexpensive—I don’t think any of my trips cost me more than $1 U.S.

Without question, one of the city’s must-see sites is Registan, which is a square that served as the heart of the ancient city during the Timurid Empire. Flanking the square are three breathtaking madrasas: Ulughbek, Sherdor and Tilla Kori. Each madrasa is a glorious example of Islamic architecture and must be seen in person to get a sense of their grandeur.

Another reason why Samarkand is among the Uzbekistan cities you must visit is because it is the resting spot of the Timurid Empire founder, Amir Timur. His mausoleum, Guri Amir, was built in the Mughal architectural style and influenced many other Mughal-style structures that came after it.

One of the reasons why Samarkand was named a UNESCO city is because its citizens have preserved the local crafts, including ceramics, paper-making, embroidery, and copper engraving, from ancient times. As yet another city along the Silk Road, silk weaving is very important there,

As a travel/food vlogger, I can’t talk about Samarkand without mentioning its plov, which was some of the best I had in Uzbekistan. As a rice, meat, and vegetable dish, it sounds pretty simple but is truly a divine flavor explosion in your mouth. The flavors of the meat, vegetables, and rice marry each other perfectly and create a dish that’s unlike anything I’ve ever had in my travels!

On a personal note, Samarkand will always have a special place in my heart, as I was lucky enough to attend the Melodies of Orient Music Festival during my time there. It’s the largest in Central Asia and is yet another reason why Samarkand is among the cities in Uzbekistan you must visit. There, I got to meet and take a selfie with the president of the country before enjoying the harmonious sounds of the musicians playing into the night. It was a magical experience I will remember for the rest of my life. 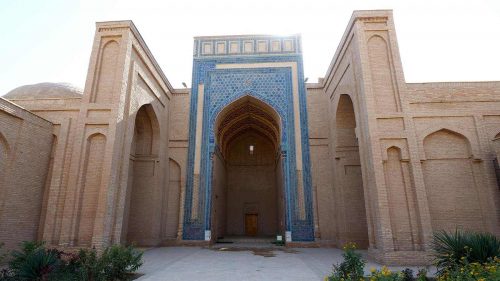 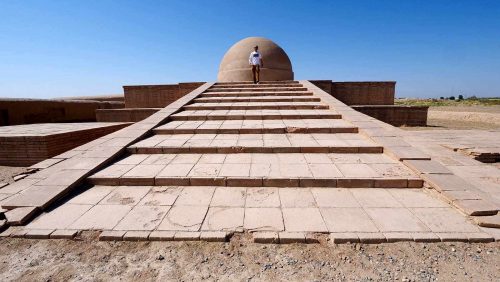 To round out your Uzbekistan itinerary, I highly recommend taking a trip to Termez, which lies very close to the country’s southernmost border. Located just miles from northern Afghanistan, Termez is sometimes described as having an old western feel. Despite being conquered by Alexander the Great, destroyed by Genghis Khan, and serving as a military base during the Soviet years, there are still lots of fantastic things to see and do there.

In a country that isn’t on most people’s radar, Termez is perhaps one of Uzbekistan’s most off-the-beaten-path cities. Almost no one goes there, which is precisely what drew me to it. It’s one of the few places in the world where you can visit ancient Buddhist monasteries. I explored two of them, including Karatepa, which is a rock-cut temple complex. I also recommend visiting the old port of Kampyr-Tepe and the Termez Archaeological Museum.

If you’re up for a day trip, consider the nearby town of Jakurgan. There, you’ll find what I believe is some of the most delicious lamb in the world, lots of juicy watermelons, and the 12th-century Jakurgan Minaret, which offers stunning views of the town and surrounding farmland.

There are few things I enjoy more than visiting little-known places, documenting my experiences, and sharing them to inspire others to visit them as well. 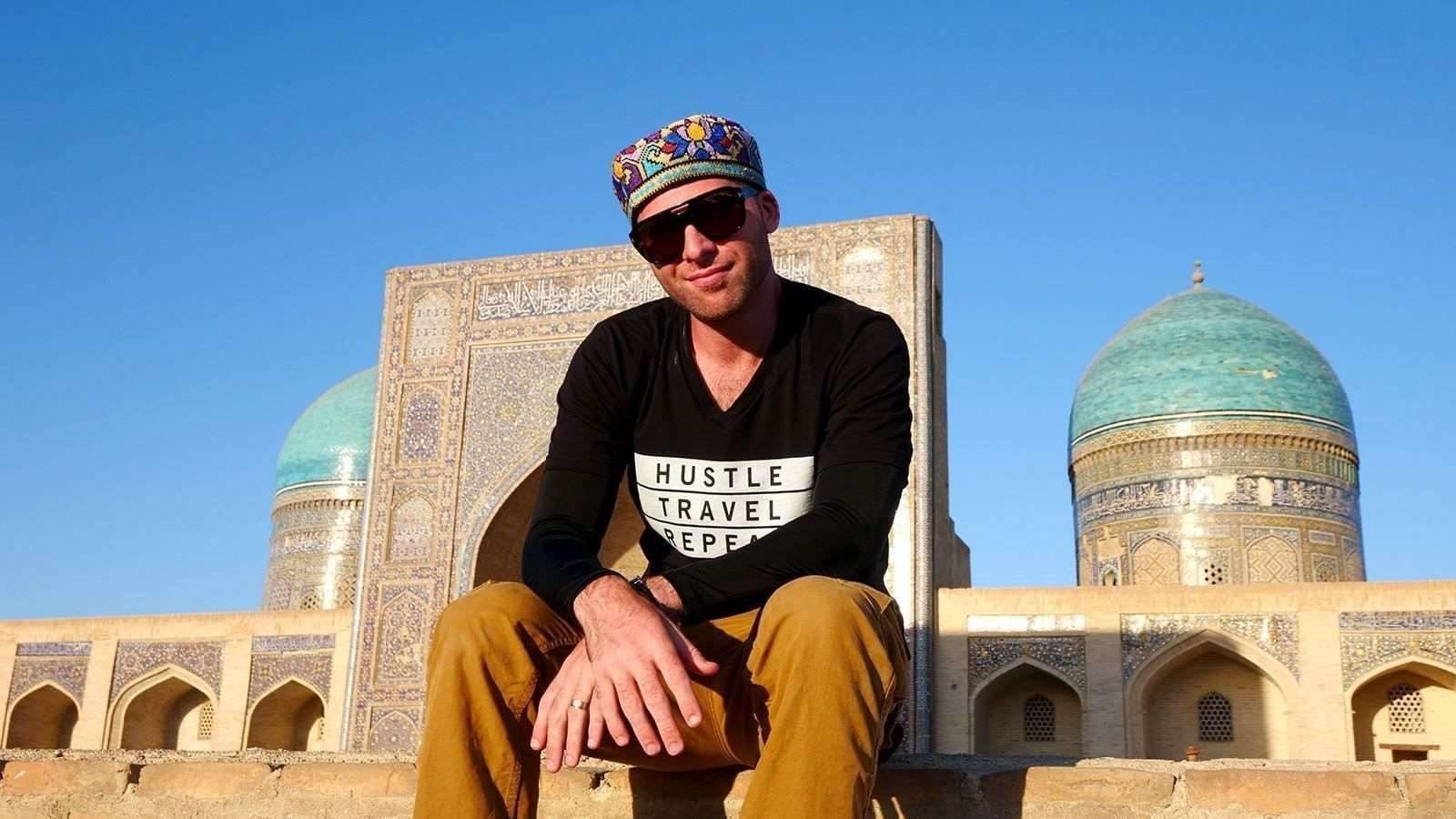 Uzbekistan is still unknown by most, but hopefully, that will change as more people visit. It offers everything a curious traveler craves: awe-inspiring sights, rich history, insanely good food, and some of the friendliest people I’ve ever met while traveling. Go to Uzbekistan. Explore its cities. It will change your life. I know it changed mine. 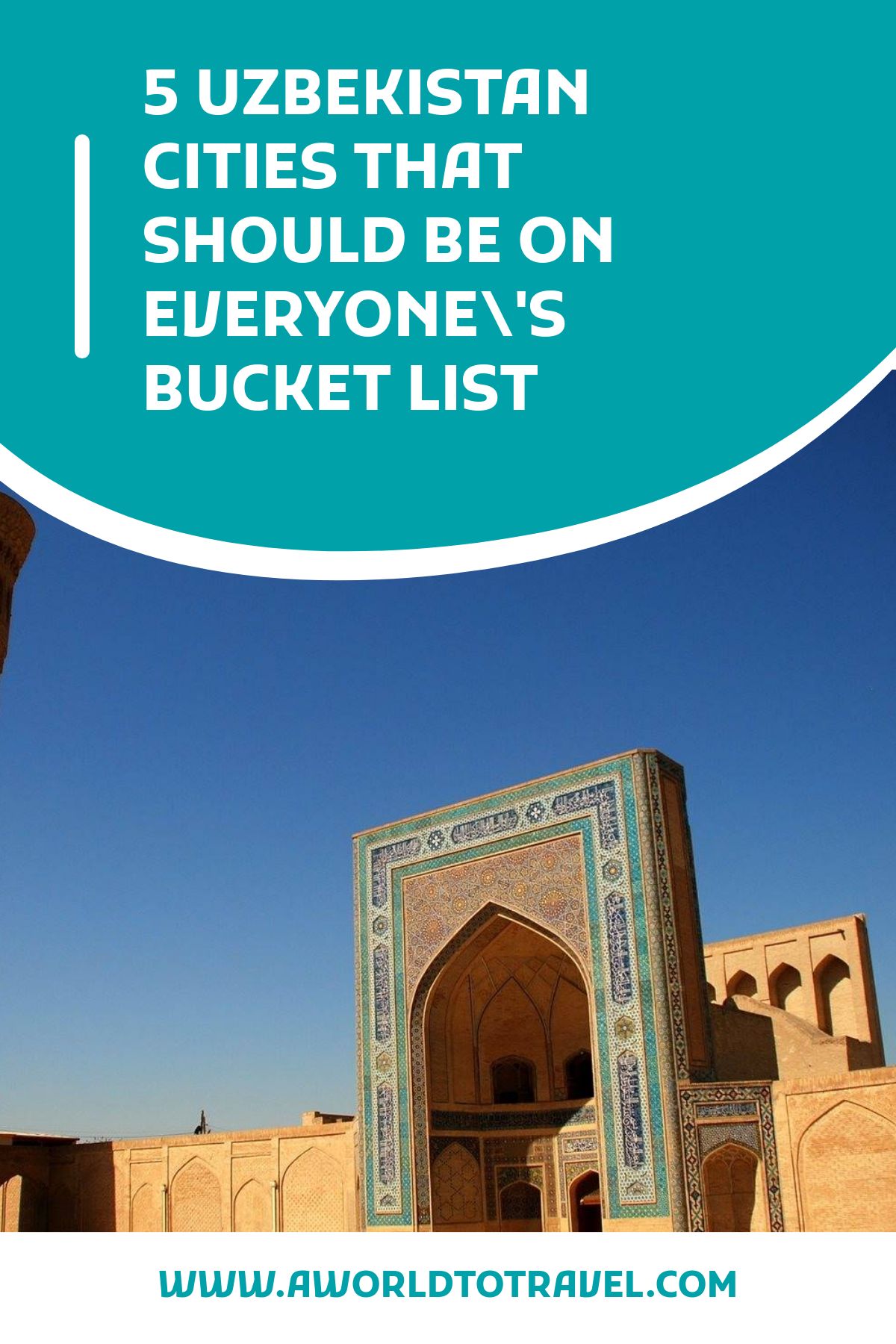 David Hoffmann is an entrepreneur, husband, father, and foodie who is addicted to traveling the world, exploring off the beaten path, and having authentic, one-of-a-kind local experiences. In the last 11 years, he has immersed himself in the cultures of 74 countries and has traveled to over 1,100 cities. He documents his travels on his website, David’s Been Here, to inspire others to explore beyond their backyards and leave their mark on the world.