Understanding Africa In 5 Maps: A Brief Explanation Of The Continent Today

The joy of traveling lies in the experience, but there is another element that makes us all the richer for it: understanding. As the adage goes, “the world is a book and those who do not travel read only one page”.  For many, traveling is a wondrous revelation in understanding: whether it means returning home to be more appreciative of birthright or circumstance, or with aspirations to improve the future.

As with anywhere, understanding Africa as it is today is key: how it has the reputation that it has; where it has been, and where it is headed. The twenty-first century is set to be the African century. While much of the rest of the world have ageing and stabilizing populations, Africa is on the verge of a population explosion. There will be another billion Africans on earth before the twenty-second-century ticks over. 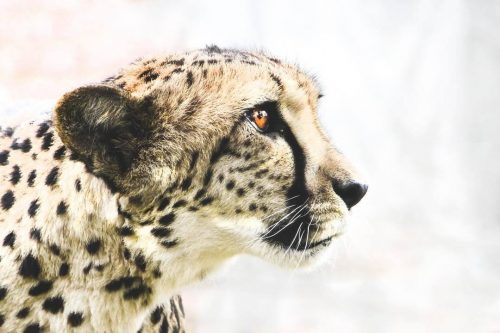 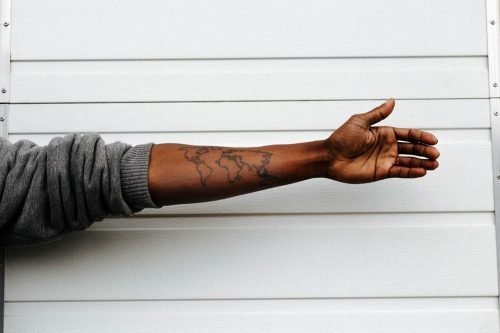 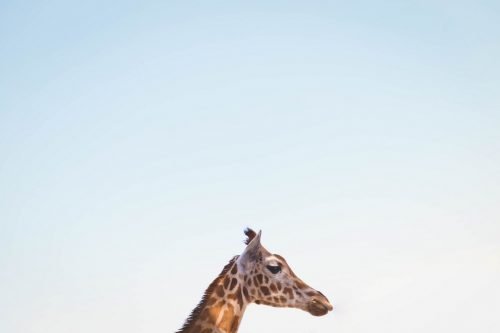 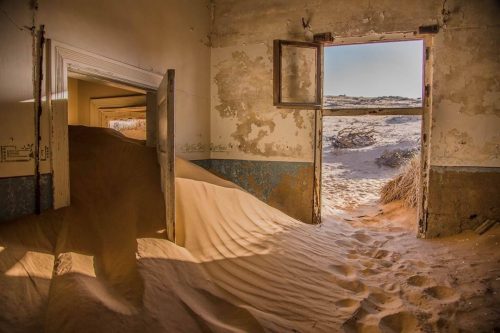 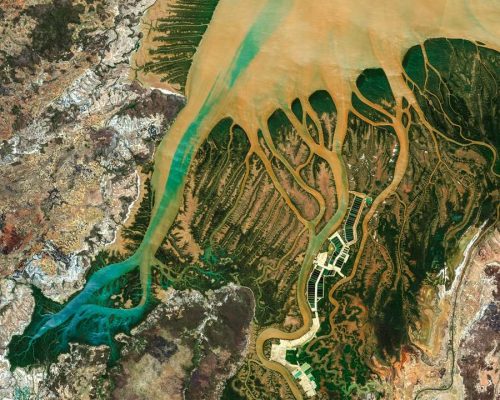 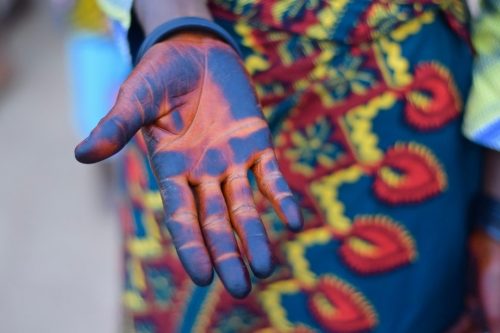 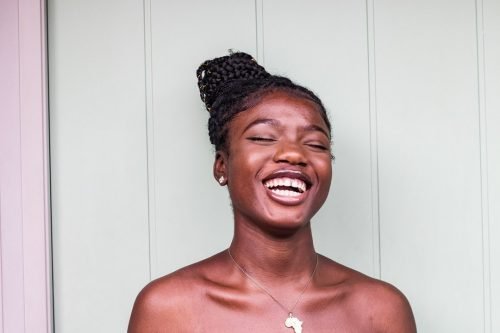 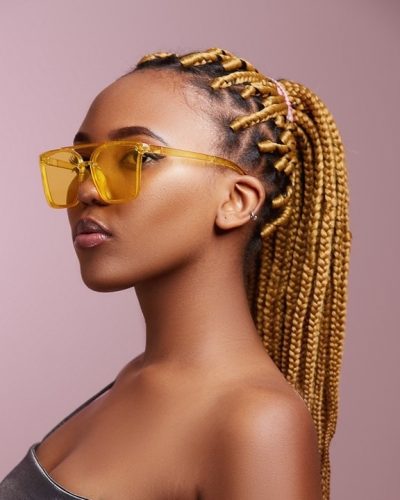 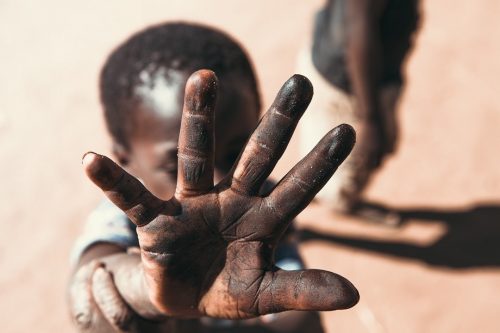 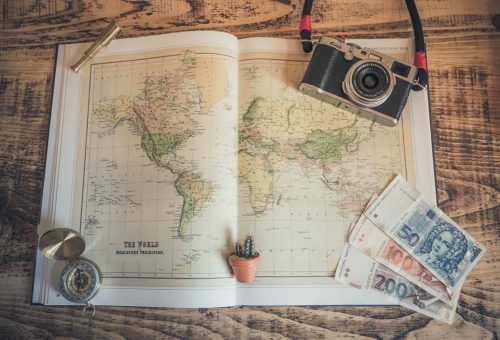 With five maps, provided by Tusk Photo, we’ve set out to look at the forces that have shaped Africa as we know it in the twenty-first century, from ancient times to the modern day:

The human species originated in Africa, and the earliest remains have been studied by anthropologists in eastern Africa, in and around modern-day Kenya. Herein is a contradiction: if human beings evolved and have lived in Africa before spreading to the Middle East, Europe, Asia, and beyond, why is Africa still a developing continent? How did the ancient Mesopotamians of modern-day Iraq figure out how to grow crops and farm livestock – a practice that is still not widespread in Africa? What gave Europeans the technological jump – and the ability to overpower much of the globe?

The short answer is geography.

The long answer is: Africa has a lot of factors going against it, which have always discouraged development. For one thing, it was sparsely populated up until the twentieth century. Up until the turn of the twentieth century, the world population was only 1.6 billion. Increased living standards meant lower death-rates, and the global population rocketed to the 7 billion that it is today in little over 100 years. Africa’s sheer massiveness (which we will get to later) isolated its population in small bands that were separated by inhospitable deserts, jungles, and arid lands. 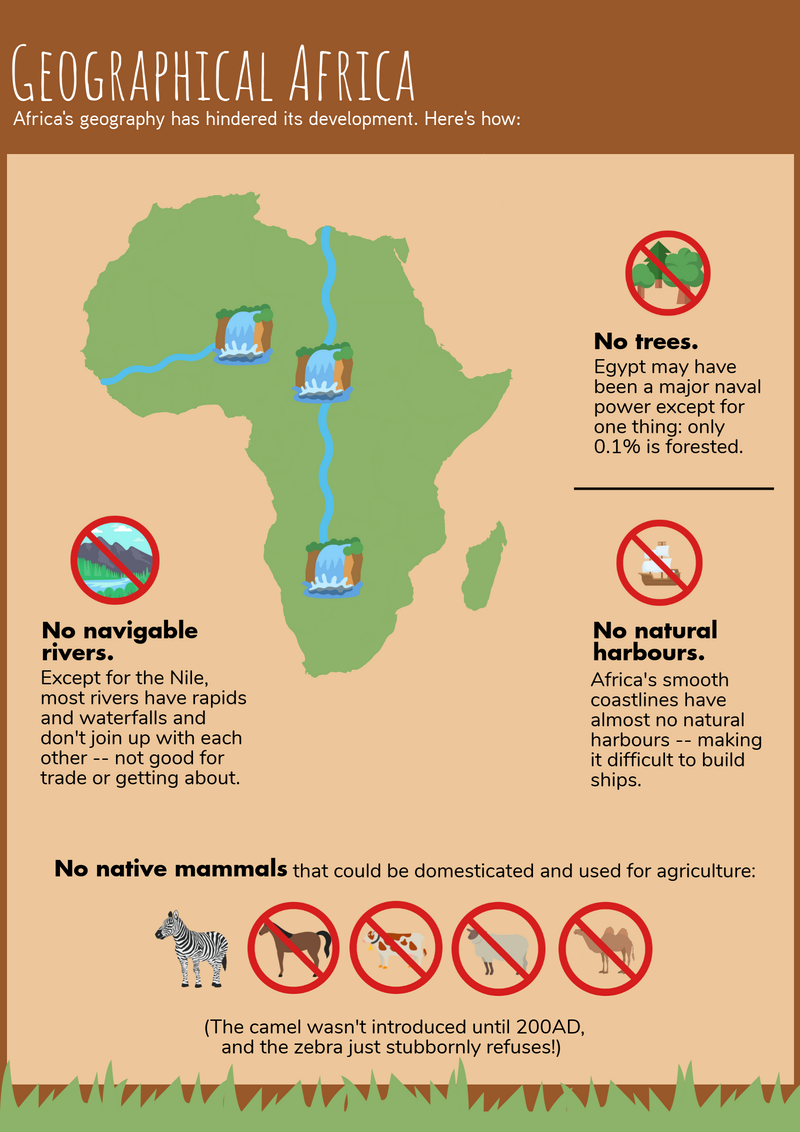 While Europe (and England especially) were blessed with calm, reliable rivers to drift cargo around, most of the rivers in Africa are plagued with waterfalls and rapids. Even worse, many of them aren’t interconnected. Water-trade has, throughout time, consistently been one of the cheapest and easiest ways for humans to trade, but for many Africans it was impossible.

Africa has not developed sophisticated agricultural practices. All of the livestock, such as horses, cattle, and sheep, originate thousands of miles away in central Asia. There was nothing to pull a plough in Africa, nothing that could be domesticated, and worse – not even any crops to grow in the first place. Although the zebra looks similar to a horse, it was never able to be domesticated. (One theory for is that the zebra is too shy of potential predators – a consequence of sharing a savanna with lions and other carnivores.) This meant that as the rest of the world built great empires and technologically innovated; many Africans were unable to move and remained as hunter-gatherers.

The challenges of Africa’s environment again have impeded its development. While Europe has a cool temperate climate and sits on the rolling fertile Great European plain, Africa is a gigantic continent, rich and diverse in life and in climate at extreme ends on both sides – from the soaking Congo-forest, the second biggest rainforest on Earth – to the Sahara, one of the driest.

The Sahara desert alone is bigger than the entire continental USA. When the Arabs invaded and colonized northern Africa, it took them hundreds of years to cross the other side. There they reached the ‘Sahal’ a dry and rocky landscape that receives almost no rainfall annually. The Arabs didn’t settle beyond the Sahal in significant numbers due to overreach. 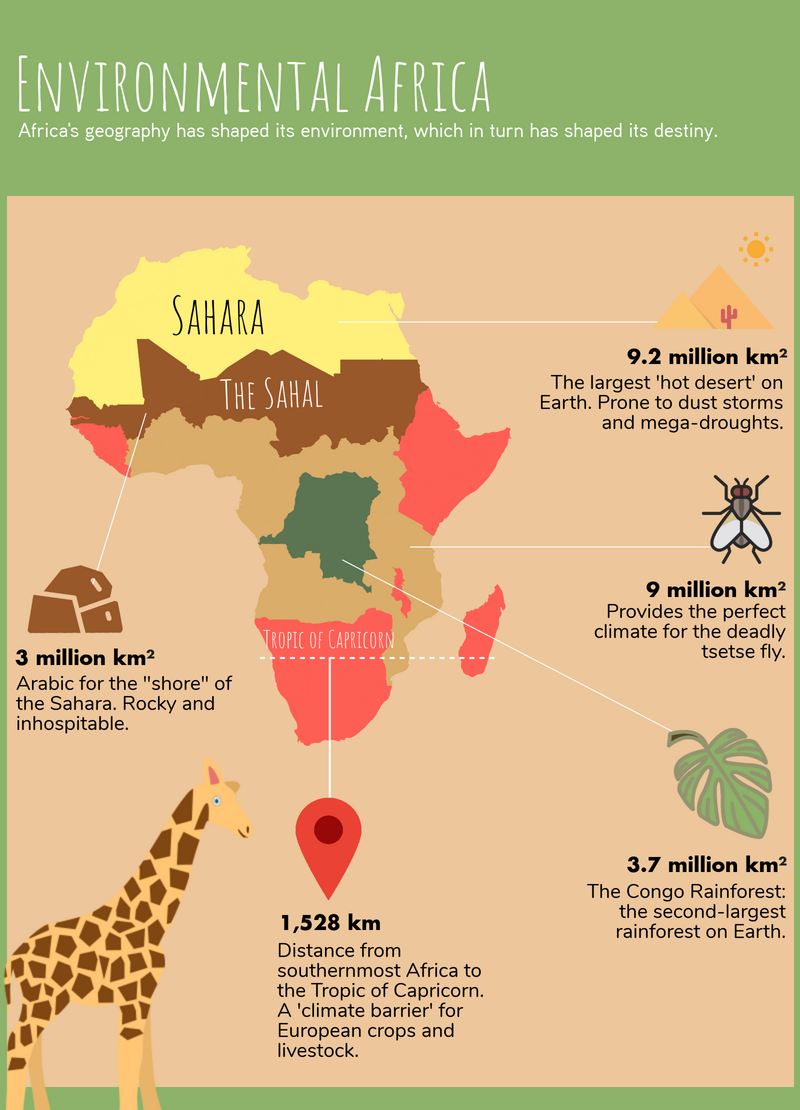 The Europeans settled in Africa the other way round. South Africa was originally a staging post, a refuge for weary sailors making a long voyage around Africa to then sail to India. But South Africa, being so far south, is similar in coolness and climate to Europe. The Europeans brought their livestock and crops to South Africa and began spreading into the interior. But the Europeans, too, suffered from overreach. They passed a geographical border known as the Tropic of Capricorn, where Africa’s climate shifts from a temperate climate to a tropical one. In this tropical climate, a tropical disease like malaria or those carried by the tsetse fly promptly killed most Europeans and livestock, and in the unbearable sun the crops they brought with them wilted and died. The Europeans never settled beyond the Tropic of Capricorn in large numbers.

At the Berlin Conference of 1884, the European powers decided to carve up Africa for its wealth and natural resources. Before Hitler and the Nazi barbarism of the Second World War, empires were fashionable and a show of a nation’s strength. The Europeans took over most of the continent, with the exception of modern-day Ethiopia (which the Italians briefly defeated in the 1930s). 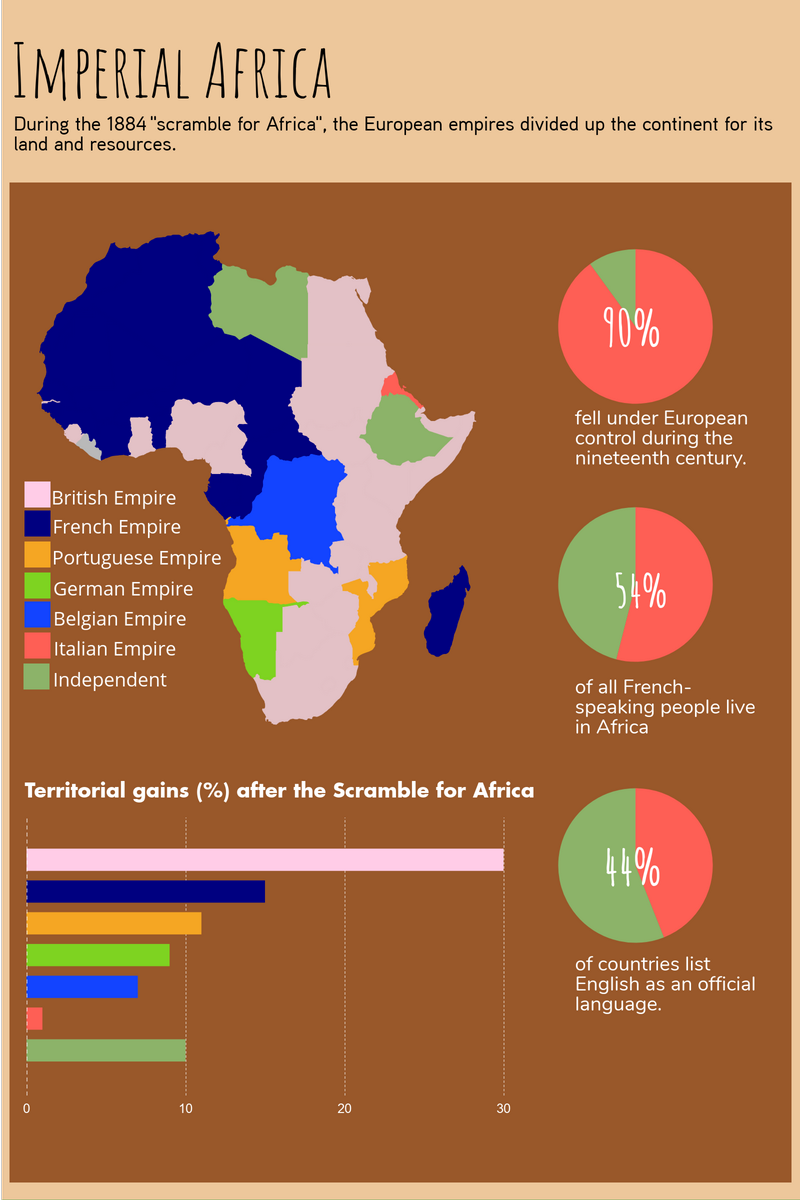 The two biggest empires belonged to the British and the French. Their empires were so large that they needed an administrative language to keep everything in order. Nowadays, English and French are global languages, with their being more French-speaking Africans in Africa than in France. The Democratic Republic of Congo is one of the largest Francophile (French-speaking) nations on Earth. During the nineteenth century, it was run by the Belgians who also spoke French but was more of a Royal Chartered Company exercise than a colony.

The people of Africa are deeply religious and follow two of the Abrahamic faiths: Islam and Christianity. Both religions are known as ‘proselytizing’ religions: meaning it is commanded in the teachings that the religion should be spread to non-believers. If the Europeans or Middle Eastern invaders had followed a non-proselytizing faith, like Hinduism, Africa would be very different in religiosity today.

Incredibly, the overwhelming majority of HIV/AIDS sufferers are located in sub-Saharan Africa. This is because, of the two faiths, Islam is much stricter in its attitudes toward sex. Only an incredible 1 in 118 sufferers of HIV/AIDS is located in northern Africa.

Despite the prevalence of the two Abrahamic faiths, it is estimated that around 100 million Africans still practice traditional religious ceremonies. Most of them can be located on what are known as “buffer fringes” – mainly areas between administrative rival empires, where Europeans avoided conflict with one another. 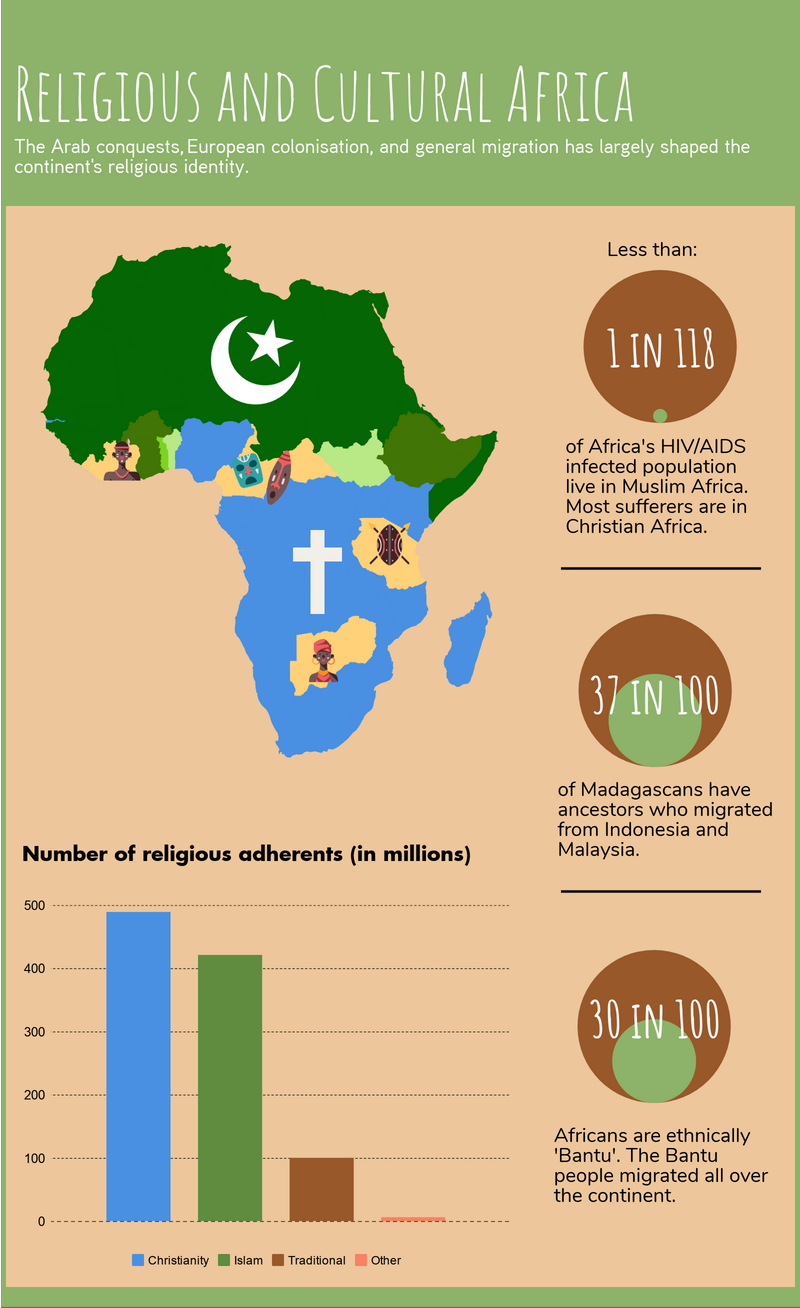 Another story of colonization is seldom heard about. This is probably because it is a form of much earlier, African colonization. It is the story of the Bantu people. It is estimated that in modern-day Africa around 30 percent of Africans are ethnically Bantu. The Bantu are an African tribe that spread from upper-central Africa, conquering, displacing, or inter-marrying with other tribes. Africa’s story, like much of humanity’s, has been shaped by waves of invasions.

But Africa has anomalies, too: in a great genetic discovery, it has been discovered that more than a third of Madagascans are actually ethnically Southeast Asian – and not African. This genetic anomaly has been described as the equivalent of traveling across the Atlantic for the first time, only to find Manhattan Island entirely populated by ethnic Swedes instead of American Indians. No one knows exactly why Southeast Asians made the perilous journey across the Indian Ocean to settle in Madagascar – or even, how they settled the island before indigenous Africans.

We mentioned earlier that we would return to the topic of Africa’s size. Because the Earth is a three-dimensional sphere, it can be difficult to accurately represent the true size of landmasses. A result of trying to pencil down a globe on to a 2D map leads to weird distortions. The result is that Greenland looks the same size as Africa on a map, despite being about 14 times larger. 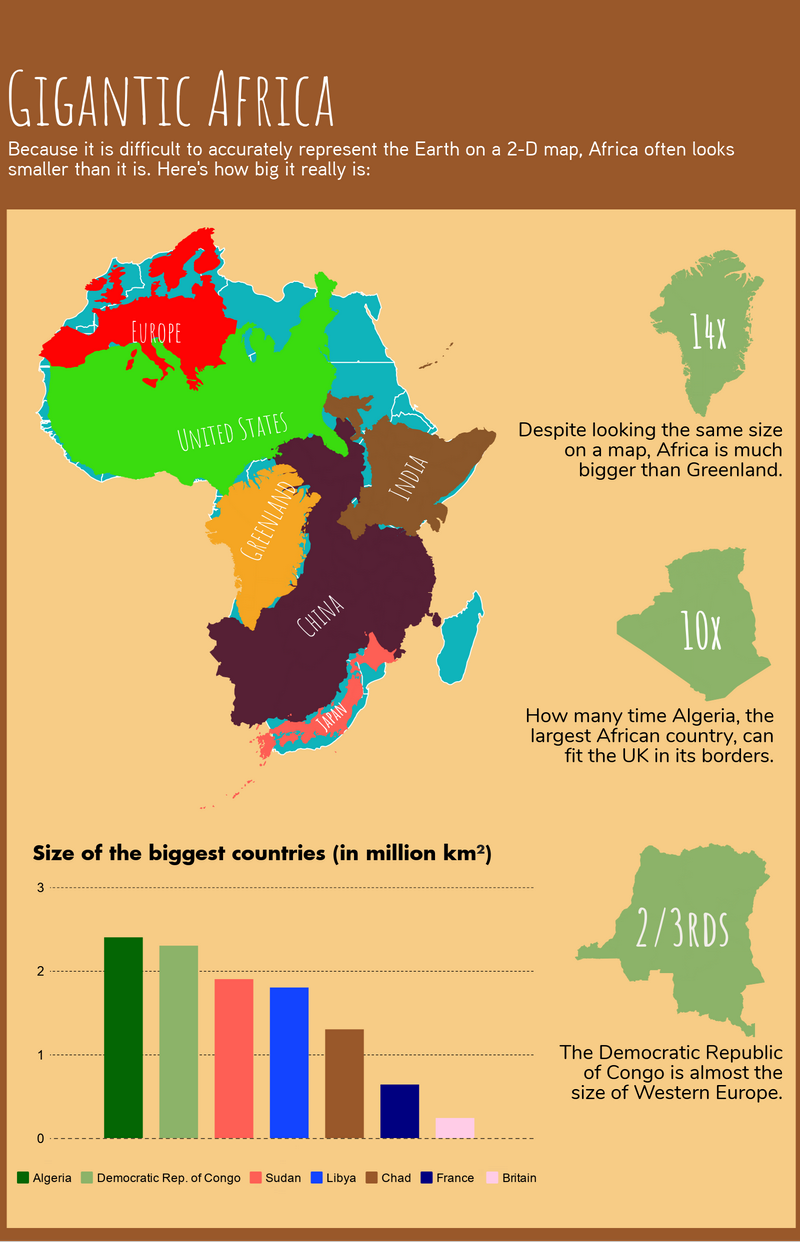 The map above gives a crude approximation of how the great nations of today would easily slot within the continent’s massive borders. But interestingly, Europe has a longer coastline than Africa. This may seem unlikely, given how much bigger Africa is. But remember Africa’s coast is very long and smooth. Europe’s coast is very zigzagged – filled with estuaries and natural harbors, making it very encouraging for shipbuilding.

Africa’s history is the world’s history. It is the birthplace of our species. Its unique character is a blend of the multicultural, geographic, and globalist forces that have unfolded over past centuries. But the technological advance is overcoming the geography that has restrained Africa in the past. This century is set to be an African one. So it is best we understand it as much as we can before we visit some of the best destinations on the African continent.