(Guest post) I just bucked up after my Auschwitz tour. What’s more, I was traveling alone for the first time in my life. Now it’s time to share my remarkable experiences with you guys. I guess my main intention is to encourage all of you who haven’t been there yet. Here’s what the trip to Auschwitz has taught me and what can teach many of you as well.

Politics can be brutally inhuman

I have never been a politics enthusiast, maybe it’s because my dad was the one to like it. He was always complaining about politicians and arguing with the opposition followers. Perhaps, that’s why I started to associate it with the feeling of aggression and violence.

Things that I saw in the Auschwitz Memorial Museum were just a perfect example of political cruelty and inhumanity.

Although I learned about the extermination camps and the Holocaust at school, I was overwhelmed and shocked anyway. It’s unbelievable how powerful the ideology can be, no matter how cruel and irrational it is. That’s even more unbelievable how MANY people were blindly taking part in those atrocious actions.

Looking at all the buildings and machines that were used for mass extermination you start to wonder, how much effort have people put in its construction. Was the fear or the money that was controlling them – I don’t have an idea.

What I’m sure about, is that the power of Nazi ideology can be the proof, that politics are dangerous and can easily lead us to SELF-DESTRUCTION. 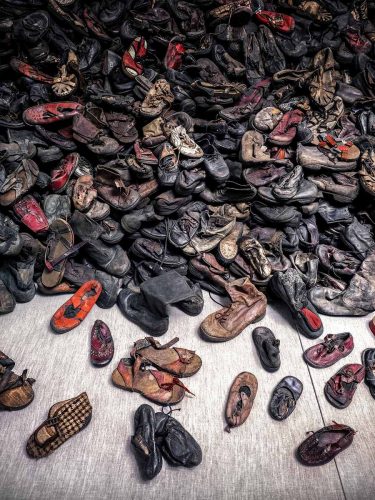 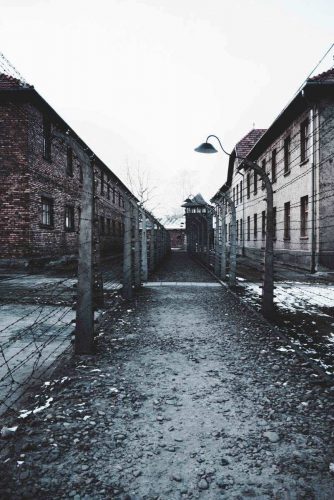 I guess that was the most unexpected thing that I found out about the Auschwitz camp. The prisoners were living in extremely poor conditions, they were treated like rubbish, they were exhausted.

For all that, they created the art. There was the place in a camp, called Lagermuseum, where all the antiques, coins, and works of art, robbed from the prisoners, were held. What’s more, the Nazis kept paintings that they ordered in a camp there. They commissioned those who had the talent to paint landscapes or illustrations for the German legends.

Prisoners were drawing instructional sketches and plans of the camp for SS officers. However, making art that was not commissioned by the Germans was strictly forbidden.

Regardless of this prohibition, prisoners were secretly making the note cards or small cult objects. They even managed to paint portraits and depictions of everyday life in a camp.

These works are precious, as they reflect the prisoner’s feelings, that was dulled by Nazis so strongly. I was truly happy that the art and SENSITIVITY is something that one cannot take away from you, even if you fear him.

What you must be prepared for, are the explicit photographs, videos, and places. Sometimes it’s even hard to look at without crying or repulsion. Gas chambers, crematoria, engines of torture, or barracks create the dreadful picture of the hell that prisoners had to go through every day.

Looking into the exhausted and suffering eyes of people at the photos, you start to wonder how they could feel. Except for the feeling of rage, I felt ashamed as well. I’m kind of a nagging person, not very patient as well. I used to complain about my life, that it’s unfair, that I don’t have that, I can’t go there.

Looking at the prisoner’s photographs, I realized that it’s pure ignorance on my part. What seemed the misery for me, would be an unmixed blessing for those people in Auschwitz. Maybe it’s kind of cliche, but I felt that we need to be happier, just because of the FREEDOM we have.

Awareness is extremely important in our life

The events that happened in Auschwitz can’t repeat in the future – everyone in the world should know that. Although it seems to be obvious, it takes a little bit more to become truly aware of that. One thing is to visit the museum and the other is to deepen the knowledge.

I found out that the Museum in Auschwitz organizes summer academies and conferences concerning education about Auschwitz and Holocaust. What’s more, there are different programs for children, teenagers, and school teachers.

It implants a REFLECTION and discussion about history in our modern society. However, it’s not only about remote events in the past. Most of all, it’s about the future and the effort that we must take to avoid its repetition. I made some research after I came back and I was pleasantly surprised that there is a lively debate going on among young people.

On the official Facebook page of the Museum, you can check all the current information and be up to date with going on events.

The world can be a connected place

The Auschwitz Memorial Museum receives millions of guests from around the world every year.

During my 4 hours visit, I passed by people from probably most of the nationalities on Earth. Although it was pretty cold by then, crowds were waiting for their guides and an unforgettable experience.

This place that was the symbol of horror, inhumanity, and the world’s indifference during the war, today is the spot CONNECTING the whole world. No wonder why it’s on the UNESCO list of World Heritage Site.

The Museum is in great condition and you can see so much effort put in the maintenance of the exhibitions. It’s one of the best museums that I have ever seen.

It was the very first time when I traveled alone. My friend had an accident and he had to stay in a hospital for some time. I wasn’t sure if it’s a good idea to go alone – I thought it could be boring and stressful.

Fortunately, I’d decided to do that, and it was a great choice for me. Now I know that it’s even better than I was traveling to Auschwitz alone.

This place was truly thought-provoking for me and I didn’t feel like talking to anybody after that experience. After the Auschwitz tour, I went to Krakow for a few days and enjoyed it a lot as well. I’ve met many more people than I usually meet when I have company.

Traveling alone somehow can force to mix with others, just to survive in a foreign country. It makes you to EXPLORE more for sure!

Best way to get to Auschwitz

I can recommend going to Auschwitz from Krakow with a private tour that provides a guide. I guess I wouldn’t experience as half as I did if I didn’t go with the tour. The company that I traveled with was KrakowDirect – it was a smooth ride with a professional driver.

You can also take a bus or a train to Oswiecim. They leave quite often from the Krakow main station and the ride takes slightly more than 1 hour each way.

If you have enough time, I do recommend visiting Krakow as well. It’s a very vibrant city that fascinated me with its artistic spirit. There are also plenty of monuments, many of them from the Middle Ages.

To sum up, everyone should visit Auschwitz-Birkenau, I’m sure of that. No matter if you’re faint of heart or not interested in history. There’s something in this place that touches you deep inside. Except for gaining valuable history knowledge, this place can allow you to look through yourself and your emotions.