It’s been 2 weeks since I was born again.

24 hours and 1700km later, we were still in the bus. Already past midnight, three different drivers had been switching duties and we were slowly reaching the last part of our journey. Tired of having been sitting for a long time, a ski / snowboard week ahead in the Alps was the only though that kept the 42 passengers smiling.

We had exited the highway half hour ago and the curvy roads were now narrowing and rapidly covering in snow.

Downhill, approaching the reservoir, the route bent right once again. At that point, speed and visibility weren’t that bad but odds were against us that night. A sudden ice layer on the pavement blocked bus wheels and the vehicle started gliding at a slow-enough-to-be-death-scary speed against the dam. Infinite anguish seized us all in the front. As guide, I was right behind the driver, a VIP seat to admire the disaster movie passing by in front of us. No fence seemed to have stopped us while the vehicle continued advancing to the verge. Below me and overlooking a 20m void, the left front wheel was not landed anymore. On the other hand, the right front one begun to be lifted too. A guy next to me and I exchanged glances. Speechless FEAR. One of the weirdest sensations I’ve ever had, came to me.

Nothing could be done to avoid falling into the void.

We were going to die !

Oddly, the movement ceased. Still swinging on a miraculous concrete guard rail, I got up quietly (on the verge!) and asked everybody to leave the vehicle calmly without motion surprises. Lastly, I exited it. Winter jacket in hand, touching ground again felt like a birth certificate. Outside that hell, freezing cold temperatures and a snow storm, our full-of-valuables and unsecured bus still pointing to the wrong direction, a blocked dangerous road, lots of vehicles and buses trapped and many people trying to help and get involved. 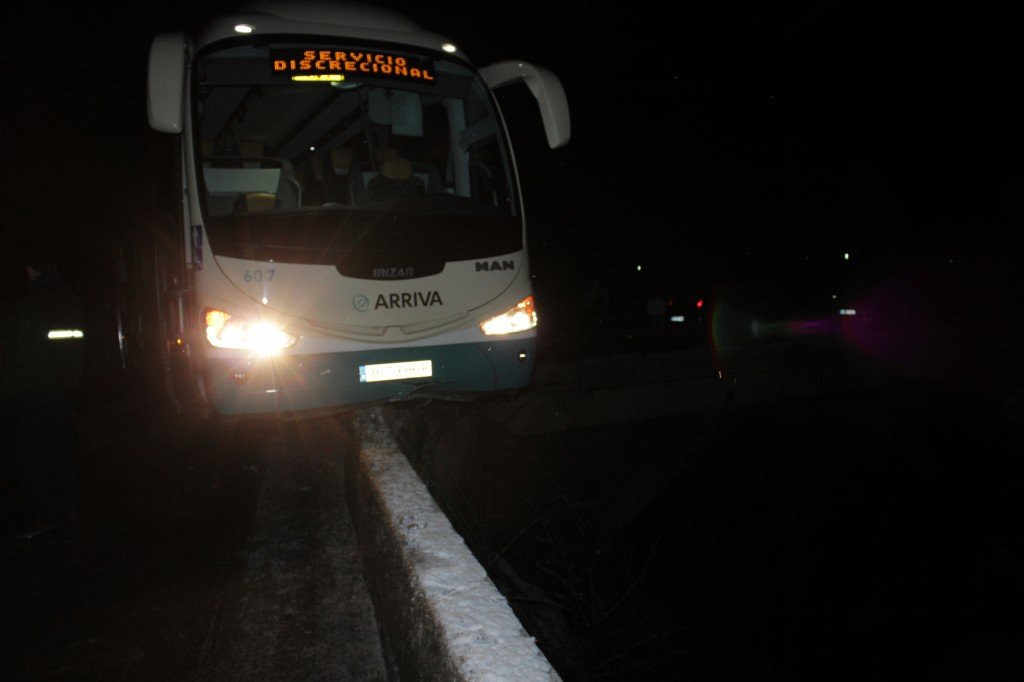 Wait a min, actually we couldn’t care less about what was going on. We were ALIVE !

French Gendarmerie came quickly and helped to remove the bus from the dam. A lot else could be written about the procedure the bus company, the tour operator and the police followed to keep all the passengers away from the danger . Let just say what really matters now is that everybody is safe; hopefully also completely recovered from the emotional distress a situation like this may cause.

Thinking back; I cannot remember clearly how those moments were lived on-board. Some people claimed to have screamed. I swear I did not hear a single noise. Apparently, many customers were asking for the doors to be opened and getting ready to use glass hammers to jump out of the bus before it vanished in the dam.

It was a busy week working in a well-known ski resort of Les Sybelles french domain. To be featured soon.