India is known for its rich culture, diversity and magnificent heritage. If you are someone who is smitten with mountains and loves trekking, the Himalayan ranges are an obvious first choice owing to its majesty and spiritual significance.

The Sahyadri ranges in the Western Ghats of India is also a hiker’s dream in the monsoons.

I got a chance to backpack in western India last year, and out of all experiences, the Torna Fort trekking in Pune has resulted to be one of the best places to visit in Maharashtra during monsoon.

Pune during the monsoon – A delight

In my time in the city, I could see that the city took on an altogether enchanting face during the monsoons as opposed to the summers. The monsoons start somewhere in between June of every year and are the best time to explore the Sahyadri ranges by hiking.

The dry trees and bushes turn to lush greens, the waterfalls flow with waters again, and most importantly you are treated with the cool winds and rains in place of the scorching sun.

Why are Pune treks popular?

Pune is situated on a plateau and the Sahyadri ranges in the Western Ghats are all within an hours drive from Pune City. The reason Pune has a lot of trekking options is that there are forts. Forts that have been built by King Shivaji, who was one of the most prominent rulers of the Maratha empire.

There are a lot of forts in Pune that he has built during his tenure for safety, to protect himself and his kingdom from the invaders by residing in a place that’s not easily accessible. And since these forts exist, we have a way up the hill, to the fort and enjoy the beauty of the Sahyadri ranges. 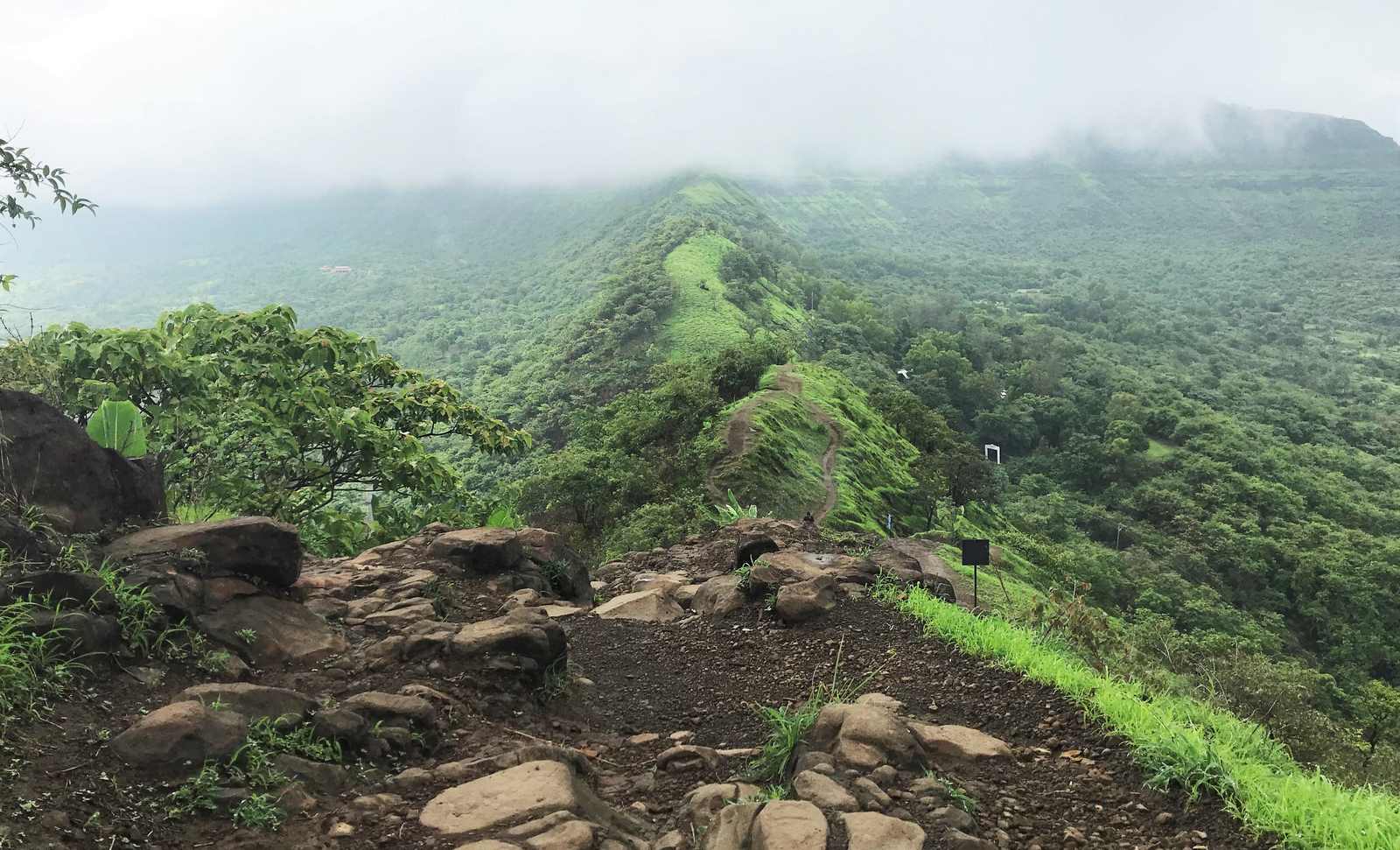 In this post, I will be sharing my experiences about the Torna Fort, which is one of my favorite places to visit in Pune till now.

It was in July 2017 that we decided to hike up Torna Fort (aka. Prachandagad), and sadly we could not complete the entire hike. We had to return midway through it. But having hiked up challenging treks before this and never giving up, this came as a surprise even for us.

Curious to find out why? Read on.

We started early in the morning, and we had reached a village where we parked our vehicles and started hiking. There was a small hike and up onwards that there were roads that took us to another hill’s base. It was when we realized that we could have brought our vehicles till there. 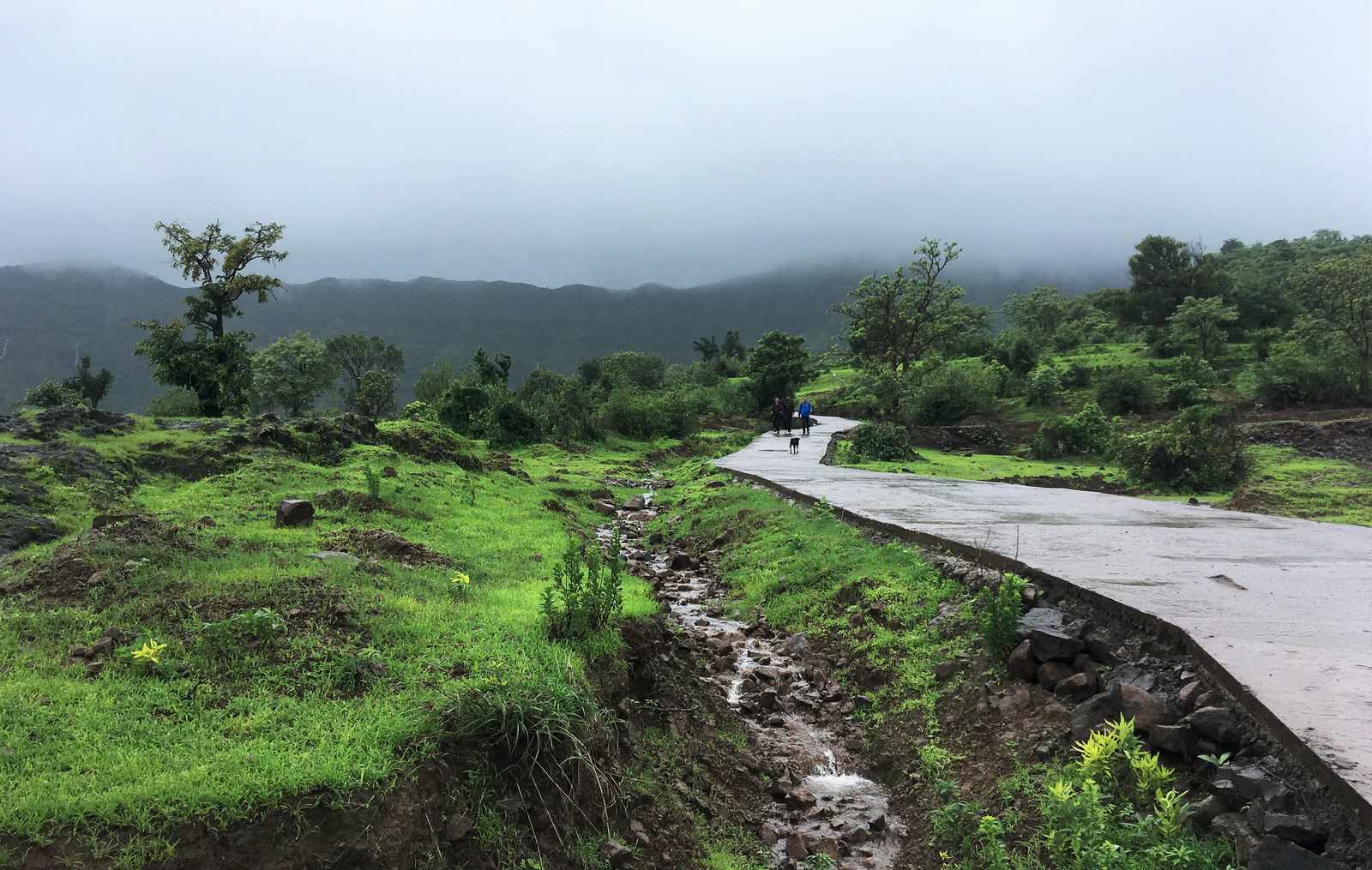 We started trekking up a hill from where the actual trek was supposed to start.

Related read: 10 Treks And Hikes In India To Enjoy The Stunning Indian Mountains

The Beauty of Torna Fort

It was raining throughout the duration of the trek. Sometimes a light drizzle with a pleasant breeze, and sometimes heavy downpours. When it was a light drizzle, we could feel suffocation inside the rainwear and since the breeze was very cool and soothing outside, we ultimately decided to enjoy the breeze, even if it meant getting drenched once in a while. 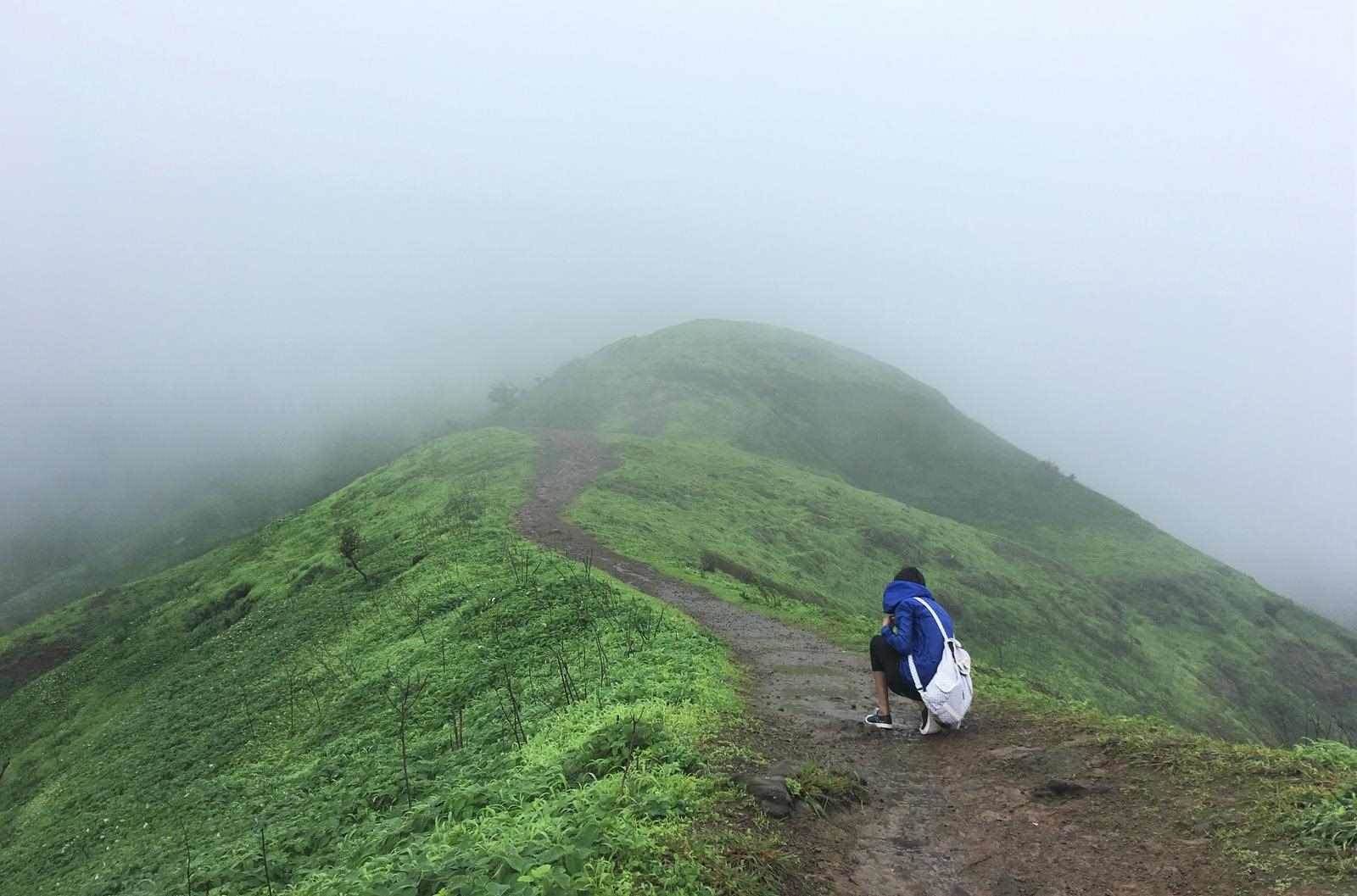 By the time we reached the top of the hill, we saw a vast stretch of mountains all around us, and a long trail through another two hills, onwards and upwards to the Fort. And the best part of it all was, there were waterfalls wherever you turn! Such a sight it is to behold. 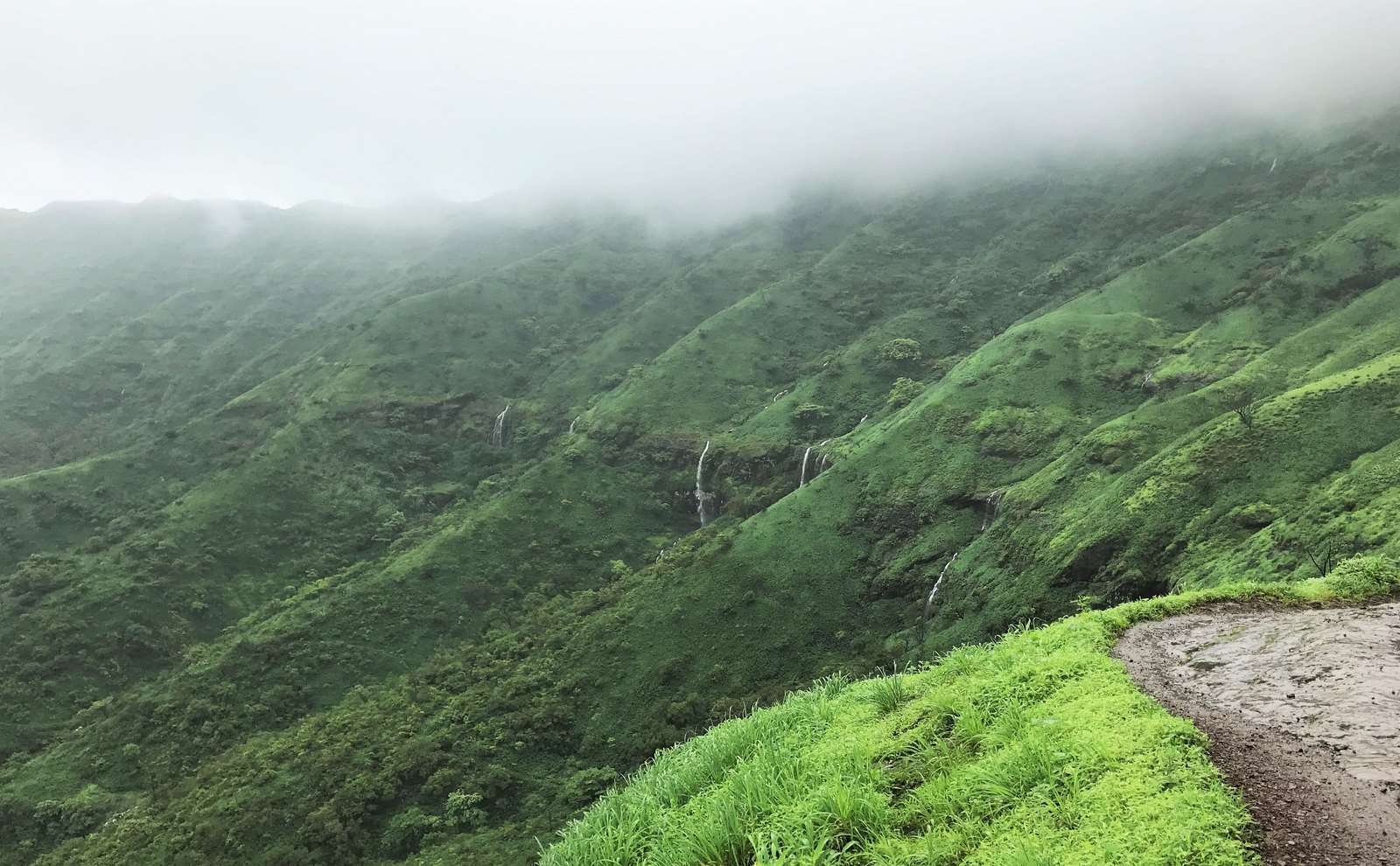 And as if this was not enough, the leaves on the mountains were fluttering with the breeze. The outer side of the leaves had a dark green shade and the inner side, light green. With all the wind, these leaves were flipping colors from green to white, and from a distance, it felt like patches of mountains switching colors. It was something that you could stand and watch all day long. So much beauty!

But we had to reach the fort, as it was supposedly one of the best places to visit near Pune. So, we proceeded on.

Battling the winds and rain

And then, the actual story started. The wilderness. The unexpected.

As we started to walk onto the next hill, we were greeted by winds that hit us with great force.  We were not able to stand without holding on to each other, and at some point, we had to sit down to make sure we don’t get blown away! It was one of the few times I wished I was bulky! In addition to this, there were rains. Rains hitting directly at your skin from the clouds right above. We were literally amongst the clouds and the rain comes at such force that it feels like needles piercing your skin. Battling both was a life-or-death moment.

One of the friends who came with us tried to go a little ahead of all of us onto the next hill but had to return because we couldn’t sustain the force of the winds and rains. So we decided that we will come back for you next year, mentally prepared for this wild experience.

Honestly, it was truly wild. The winds could have taken us any moment, it was such a battle. Nonetheless, I totally love moments like this, moments that are not ordinary, moments that awake the wilder spirit in you.

The next year, we decided to go for it again. In fact, we had decided to go at exactly the same month of the year to make sure it would be as wild as the last time.

We planned a hike again, with many more people this time, who got inspired after hearing our experiences.

This time, there were a lot of people, so we crossed the two hills ahead hand-in-hand and then had to climb up to the fort. The path from there had steps and rails on both sides so it was safe but not easy. It would be a Moderate – High level of difficulty.

On the way to the Fort, we stumbled upon a waterfall, which we did not mind getting drenched in, though it left us shivering in the cold. 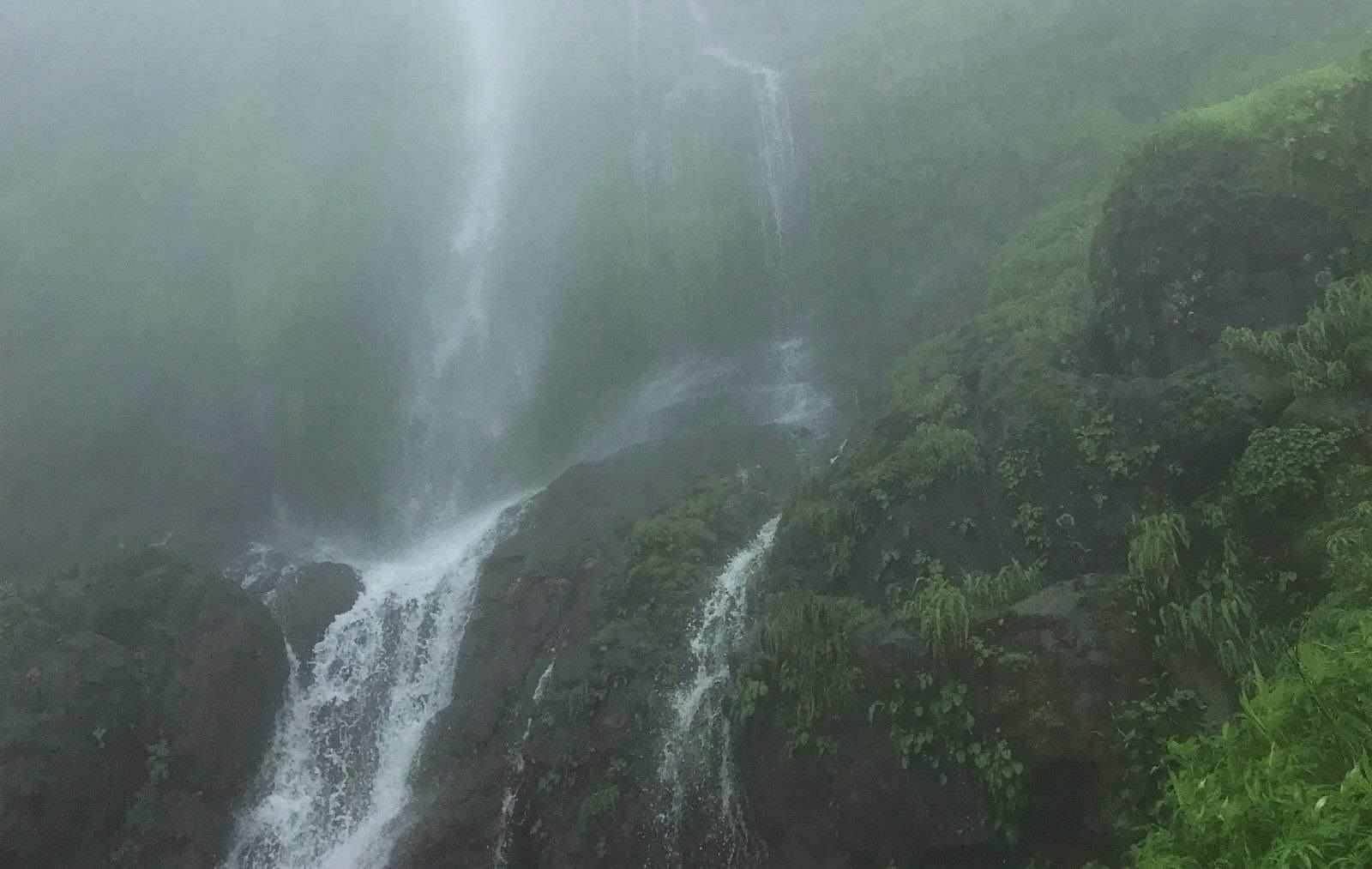 We then reached The Torna Fort.

Getting to Torna Fort, one of the best places to visit near Pune

It was when I realized the summit that I realized that it was indeed a safe place to reside. Given the difficulty of the hike, thinking about the construction of the fort left us even more surprised. 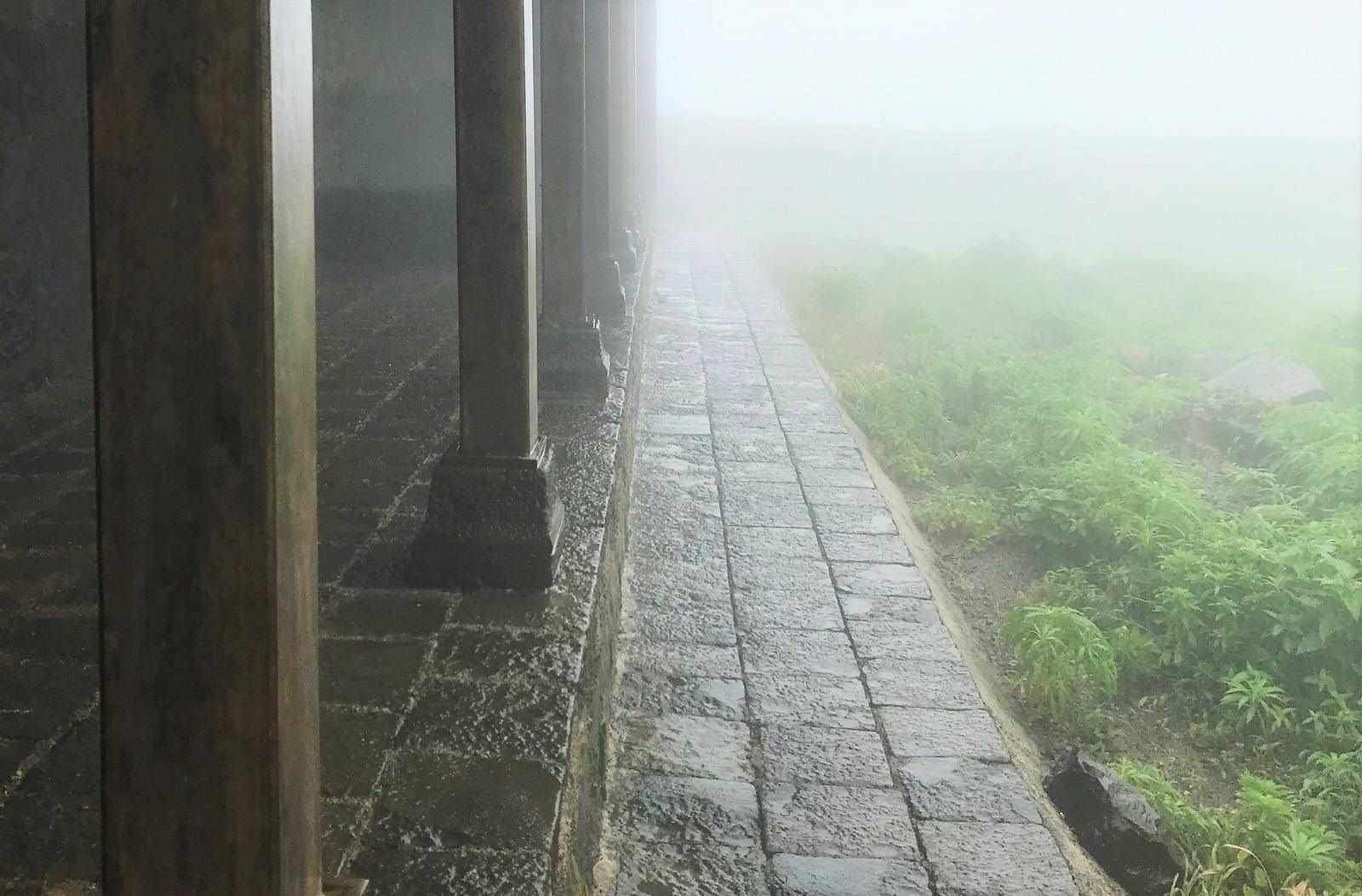 You could also camp there overnight if you wish, and there aren’t tent options there so you might want to carry one along.

We had some snacks and hot drinks atop and then started our way back down. I was ahead of most of the group and I got to witness something I had not seen till then. 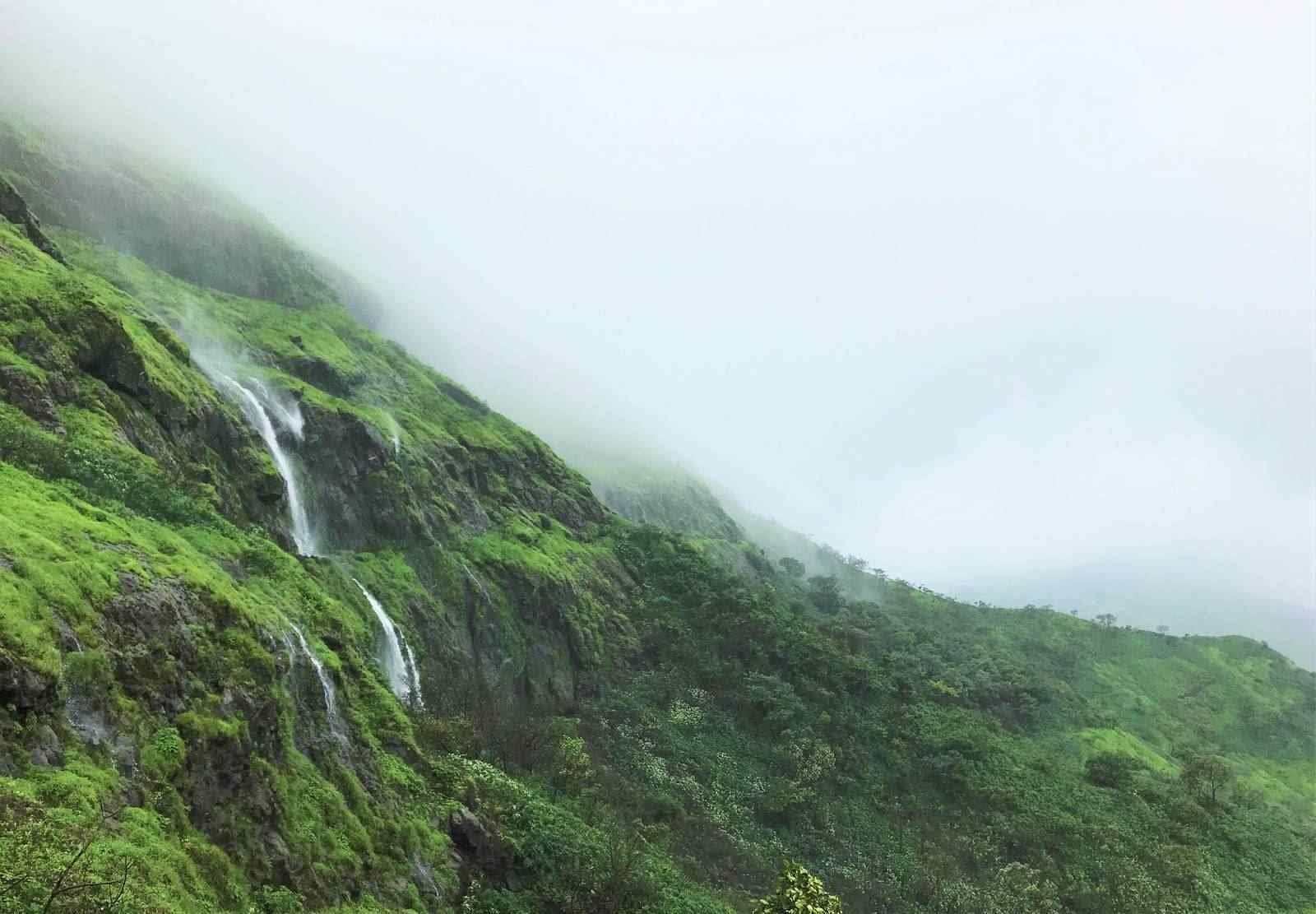 The waterfalls are supposed to flow down, and here they were again making their way up because of the winds. Truly magical, I must say. It was quite cloudy, so I could see the reverse waterfalls only now and then.

The rest of the trek was easy, we made our way down and then onto our homes but Torna is one place that would stay with me forever.

Some of the other wonderful forts near Pune are the Rajmachi fort, the Raigad fort, the Visapur fort, the Tikona fort, etc.

Do let me know your experience of trekking in the Pune monsoons, or if you get a chance to visit this one or any of the other forts in Maharashtra, I would highly recommend it!

Mark Bennett is a writer and traveler, whose major inspiration has been camping with his father ever since his childhood. He aims to visit 75 countries before he’s 30. Follow his adventures on his site.