Blue Flames, Volcanoes And Kretek – Top Things to Do in East Java, Indonesia

Java Island is the most populated island in the world with 145 million people; 57% of the country’s population is concentrated here resulting in Java being the center of Indonesia’s politics, economic growth, and culture. Today, I want to share with you the top things to do in East Java Indonesia

From a travel destination perspective in Indonesia – aside from Bali – Java becomes an instinctive choice to explore and experience due to its diverse history, culture, and landscape. Jakarta, the capital city, hardly has any tourism appeal due to pollution and traffic congestion. Travelers flock to Central Java for the spectacular Borobudur and Prambanan temples. But it is East Java that has the natural beauty of smoking volcanoes, rolling green hills, and fabulous panoramas.

How do I get to East Java?

The largest city in East Java is Surabaya which is also the second largest city in Indonesia. You can fly directly into Surabaya from Jakarta and other major Indonesian destinations as well as from Singapore, Kuala Lumpur, Penang, Bangkok, Taipei, Hong Kong, Guangzhou, and Brunei.

Train and express buses are also available from Jakarta, Bandung, and Jogjakarta but do expect a long journey of 10-15 hours. If you are traveling from Bali, hop on a ferry from Gilimanuk to Ketapang in East Java, then catch a bus to Banyuwangi, and finally board a train to Surabaya. 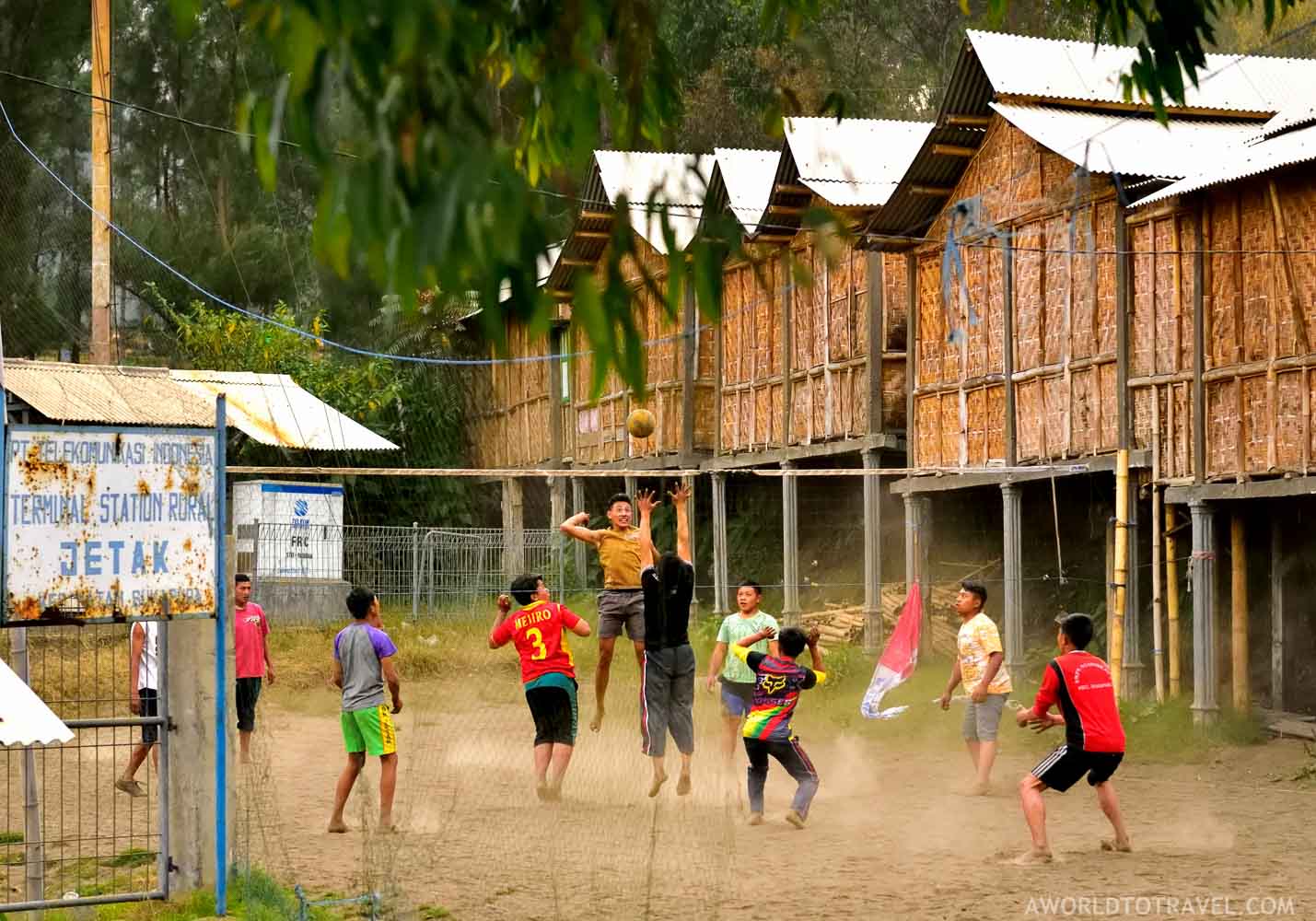 Any interesting places to see in Surabaya?

Not many, unfortunately. However, I would like to recommend a visit to the House of Sampoerna, a 19th-century Dutch colonial building which is a museum for one of Indonesia’s most famous kretek cigarette manufacturers. Kretek cigarettes are made with a blend of tobacco and cloves; the word kretek comes from the crackling sound of burning cloves.

The ground floor of the museum exhibits the origins and history of the Sampoerna business empire, various types of cloves sourced from many parts of Indonesia and how cloves are used in the cigarettes.

Not trying to encourage smoking here but the interesting part of the visit is to go up to the top floor to have a bird’s eye view of the factory floor where hundreds of women roll, trim and pack the kretek cigarettes.

The factory floor is divided into 3 sections: filling, rolling and trimming, and packing. Each worker has a minimum target to achieve in a day, or face termination – fill 1,000 cigarettes an hour, roll and trim 350 cigarettes an hour, and pack 200 boxes an hour. As such, the process in the factory moves at a fast-paced, almost robotic, the workers’ fingers a blur of motion.

To see the factory operations, visitors must arrive at the museum before 2 pm. Photography of the factory is not allowed.

For more information on House of Sampoerna, here’s their website: houseofsampoerna.museum

11 Tips To Travel Around The World On A Budget

So, what’s the highlight of East Java then?

The main highlight and one of the top things to do in East Java Indonesia, is visiting the Bromo-Tengger Semeru National Park, named after Mount Bromo (2,329m), the Tengger people who inhabit the area, and Java’s highest mountain, Mount Semeru (3,676m). 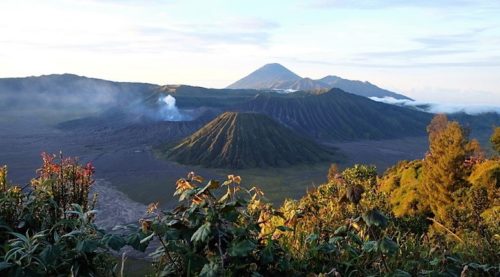 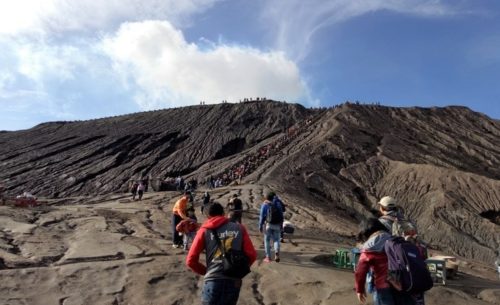 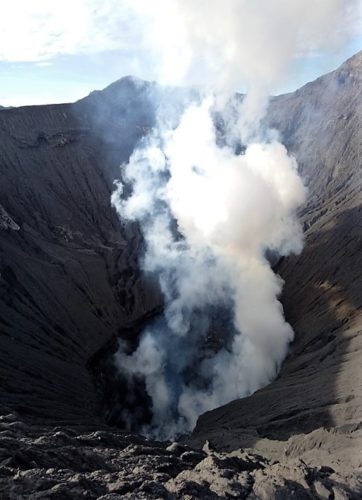 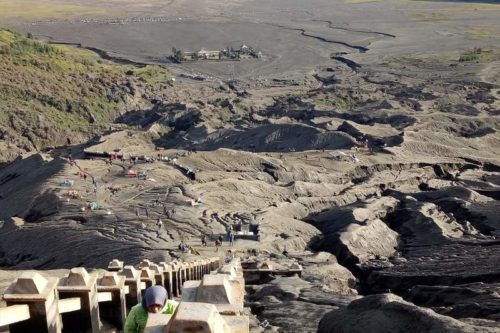 Mount Bromo is the most popular and accessible active volcano in Java whereas Mount Semeru is currently closed to visitors due to its highly active nature. The last eruption of Mount Bromo was in November 2010 which saw the volcano spewed ash up to 2,300 feet in the sky, and its eruption went on until early January 2011. The national park was closed but reopened several months later.

Our Indonesia Trip Itinerary and Map

Can I climb Mount Bromo? 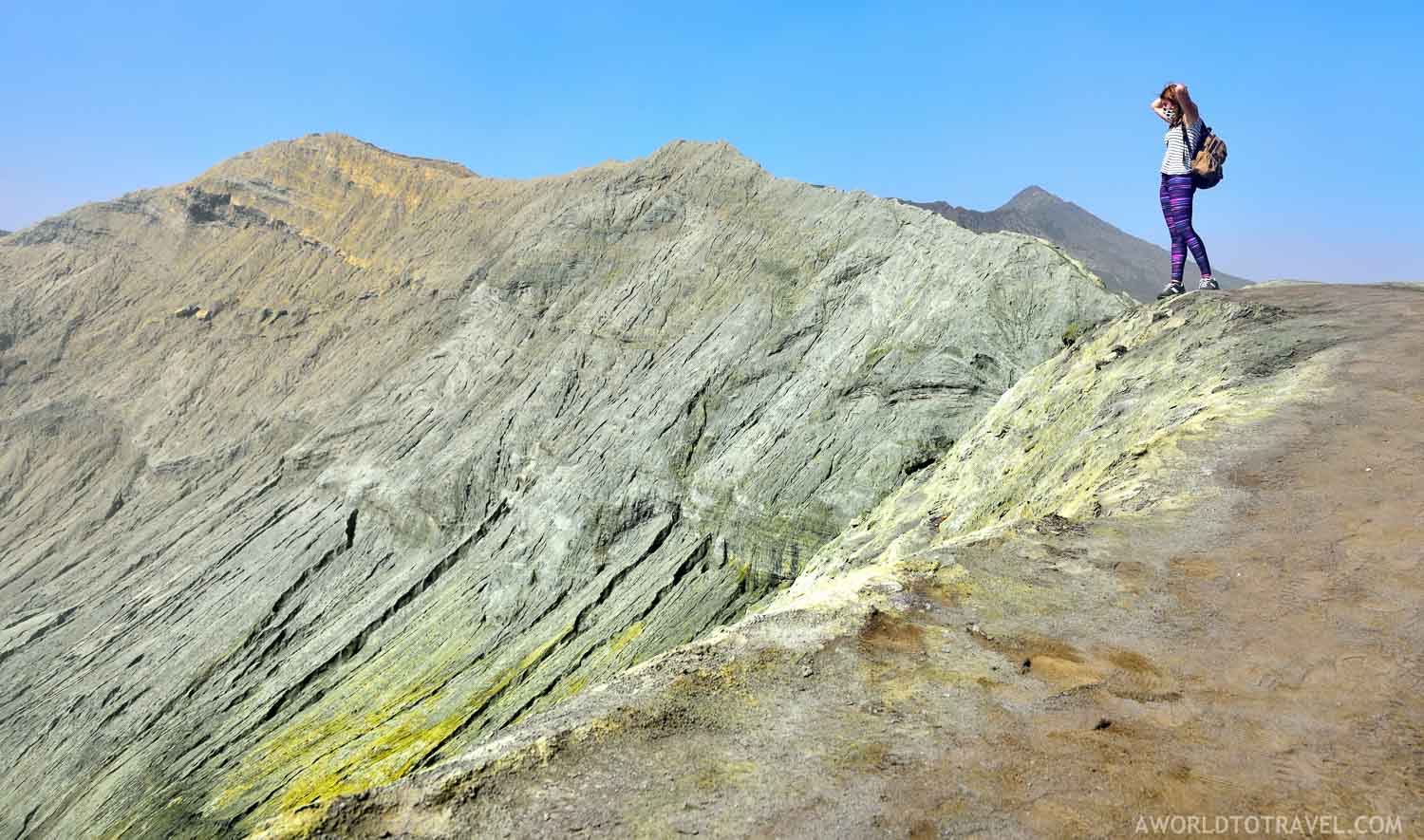 Yes, you can but the climb is not like a typical mountain-climbing experience.

Most travelers go by local jeep to Mount Penanjakan Viewpoint at 3 am to see Mount Bromo at sunrise. No vehicles are allowed at the viewpoint except local jeeps and motorbikes.

*Alternative option: You can trek for 2 hours from your accommodation through the Sea of Sand (Laut Pasir) to Mount Penanjakan Viewpoint.

As the sun rises, you will see not only Mount Bromo but three distinct volcanoes: in the foreground is the dormant Mount Batok, just behind it is Mount Bromo with its entire top blown off, belching white smoke, and Mount Semeru emitting smoke every 20-30 minutes.

Once the sun has risen, you would return by jeep to the Sea of Sand where the Tengger people (you can spot them for their ponchos) trot on horses to bring tourists back and forth to the foot of Mount Bromo to climb 200 steps to the crater where white sulfur smoke is emitted.

*Important note: Please consider walking across the Sea of Sand to the foot of Mount Bromo – a not exhausting 30-40 minutes’ walk – instead of hopping on a horse.

Where can I climb an actual mountain in East Java? 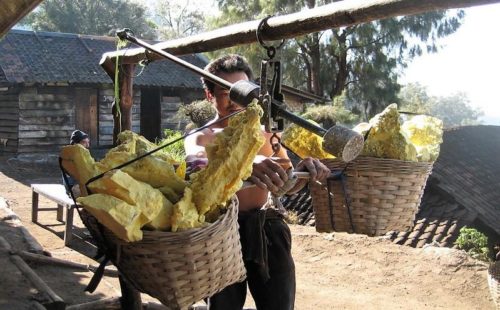 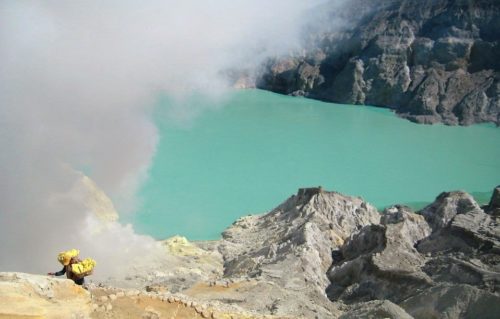 Ijen Crater is 1km-wide, highly acidic lake crater and turquoise in color. The crater is known as the world’s largest acidic lake and is also the site of a labor intensive sulfur mining operation. Workers climb up and down the crater, mine the sulfur and carry baskets of sulfur chunks on their shoulders.

Each basket of sulfur weighs about 70 kilos, some workers carry up to 90 kilos. They may take a breather or two but never rest long. It is a risky and hazardous job, mining is done only twice a day but up to two weeks in a month because the toxic fumes from the sulfur make them susceptible to respiratory ailments. The workers do not earn much, as little as US$5 a day.

As you hike closer to the rim crater, the air changes to acrid smoke, sulfur smoke blowing in the distance. The landscape changes from thick greenery to sparse dried up branches. Many hikers wear a mask to cover their mouths and noses in order not to breathe in the sulfur fumes. You can also go down to the crater to watch the workers mine and scrape the sulfur, and perhaps try to carry those heavy baskets!

Is it true that there are blue flames at Ijen Crater?

Yes, that’s right. The blue flame or glow is actually light from the combustion of sulfuric gases. The gases come out from cracks in the crater at high temperature and pressure and ignite blue-coloured sparks when coming in contact with air. Nobody can see this blue glow at the crater in daylight for the glow is only visible in the dark.

Note: Do exercise caution when climbing Mount Ijen for the blue flames. There are many travel agents offering Blue Flame Tours which means you will be sharing the narrow and rocky path into the heart of the crater with hundreds of climbers. The sulfur fumes may cloud your vision in the dark and with the strong wind, it’s advisable to go slow to avoid sliding down on loose rocks or falling into the crater! 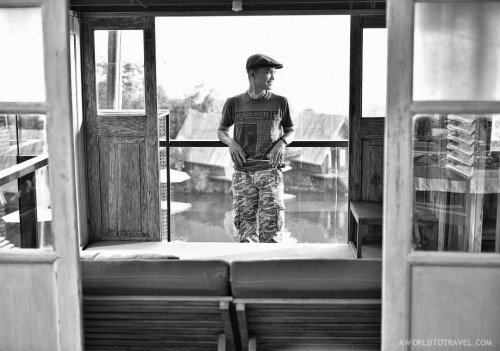 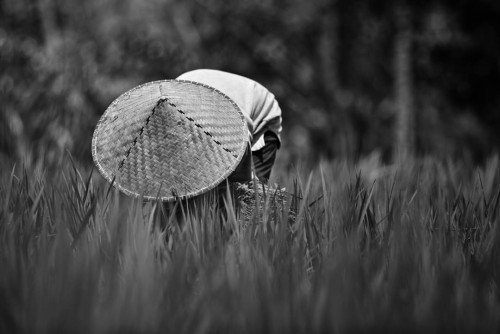 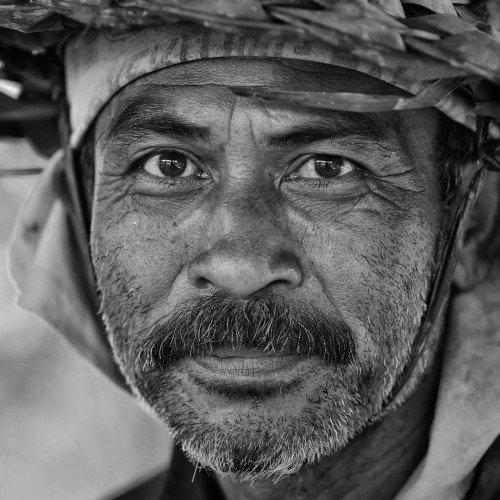 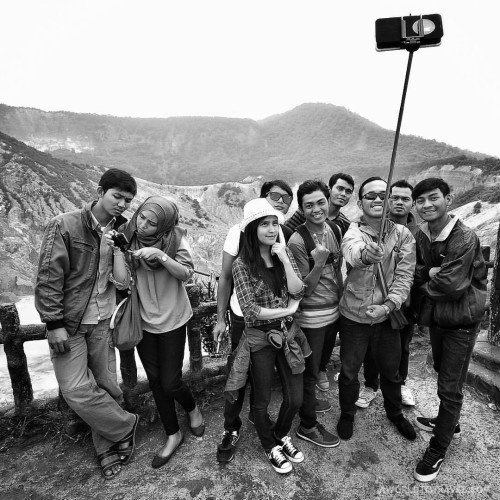 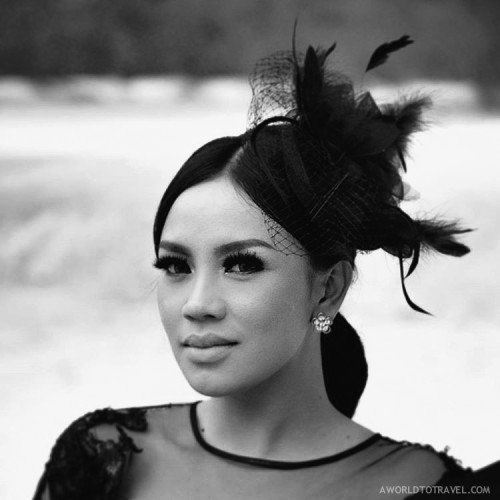 Humans of Indonesia. A Portrait of A Country and Its People.

How far is Mount Ijen from Surabaya?

The distance between Surabaya and Mount Ijen is about 6-7 hours’ drive, therefore it is better to come from Bali by ferry for a 45-minute journey, followed by a 2-hour drive to Banyuwangi province in which lies Mount Ijen.

*Please ensure that you obtain proper information and permits before hiking volcanoes on your own in East Java Indonesia. This is because the mountains could be off-limits if local authorities detect potential volcanic eruption or tremor activity.

Kathleen is a travel writer and blogger from Kuala Lumpur, Malaysia. She blogs at Kat Pegi Mana: Where Is Kat Going. Through her blog and writing, Kathleen aims to inspire people to appreciate and connect with various heritage and cultures around the world.