While most trips involve traveling across countries, or through time zones, a visit to Cyprus is more like traveling through time, even without the Tardis.

Renowned as the birthplace of Aphrodite, Paphos is a history lover’s dream. And, even those who aren’t already hooked on history will be by the time they return from this south-western corner of Cyprus.

In the footsteps of Romans

We begin our journey back in the 2nd century AD. The finds at the Paphos Archeological Park date back from prehistoric times. But the vast majority and the best, of them are from Roman times. 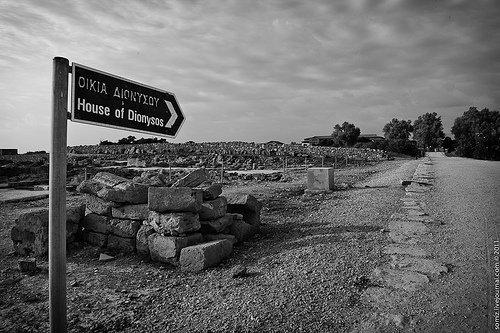 The highlights of the park, which is a UNESCO World Heritage Site, are without doubt the Roman mosaics, a series of stunning mosaic floors in the houses of Roman noblemen.

Most of these are remarkably intact, and all have a fascinating back story that transports you to a time of myths and legends. The tragic story of Pyramus and Thisbe, which is said to have inspired Shakespeare’s Romeo and Juliet, is depicted in one of the most beautiful examples.

The two lovers had arranged to meet in the forest. But when Thisbe arrived first, she fled after seeing a tiger, leaving her scarf behind in her haste. When Pyramus arrives, he sees her scarf covered in the blood of a fresh kill. Assuming Thisbe is dead, he falls on his own sword. When Thisbe returns to look for him, she too takes her own life.

Another piece of art tells the tale of Apollo and Daphne. When Apollo falls head over heels for Daphne, Cupid shoots one of his arrows at her in a bid to unite the pair. But Daphne asks her father to help her as she doesn’t wish to wed and he turns her into a tree so she can never get married. Every mosaic depicts such a fantastical legend, you could easily while away a whole day exploring only these stunning artifacts but we continue our journey back in time.

Further back in time 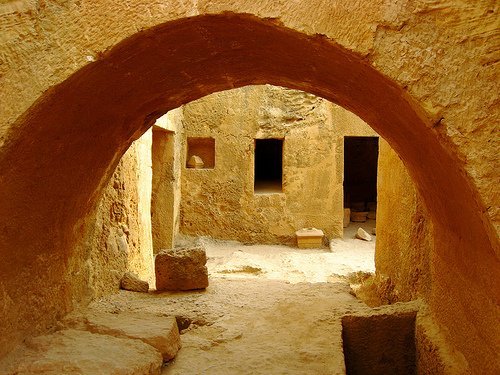 From here, we travel just a few kilometers, but hundreds of years – to the 4th century BC. The Tombs of the Kings in Paphos sit further north, close to the Atki Beach resort.  The name is slightly misleading as no actual kings were buried here. These tombs are the final resting places of Paphian aristocracy and date from the 4th century BC, until the 3rd century AD when this site was no longer used for burials.

But, even though they weren’t built for royalty, they are surely no less stunning. Cut into the native rock, you can descend narrow, uneven steps to look into the tombs themselves, some of which are designed to look like the homes of the living. Visit in the early morning or evening – the site is open from 8 am to 7.30 pm – and shadows are cast by the rising or setting sun adding further drama to this already atmospheric site.

A visit to Paphos’ Castle is another must-visit when in Cyprus. More of a fort than a castle, it was originally built in the time of the Byzantine Empire before being rebuilt by the Lusignans, destroyed by the Venetians, and rebuilt again by the Ottomans in the 16th century. 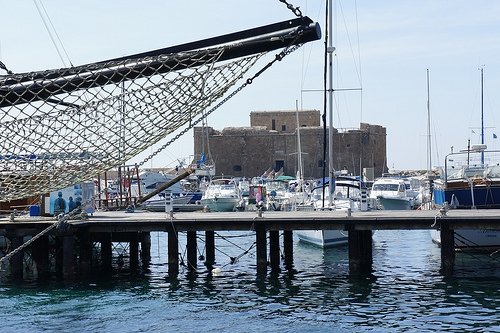 Today, it is one of the most beautiful landmarks in the Paphos region. A popular wedding venue, it is also a magnificent backdrop for the Paphos Aphrodite Festival which takes place every September. A different opera is staged here every year, with the castle acting as part of the scenery. Otello is playing during our visit and, as Verdi’s music soars above Paphos harbor, with the sunset mirrored in the water, there can be a no more magical way to end our trip than back in the present day by listening to music first performed more than a century ago, in a castle built some 800 years ago.

Katie writes over at Delightso about her two big loves of food and travel.  Wherever her travels take her, she tries to immerse herself in the culture and learn about the local history and she believes this makes her adventures even more memorable.