13 Amazing Things to Do in Victoria, Canada

Victoria is the capital of British Columbia and a considered one of Canada’s most beautiful cities. Located on the southern tip of Vancouver Island, the coastal city attracts summer crowds who arrive by ferry from Vancouver or stop for the day on an Alaska cruise.

If you’re visiting for more than a few days, a road trip up Vancouver Island allows you to see Long Beach, part of the Pacific Rim Natural Park Reserve.

Those stopping on an Alaska cruise from Seattle or Vancouver may only have a day, but you won’t be short of activities or attractions to choose from.

Here are the best things to do in Victoria during your vacation. 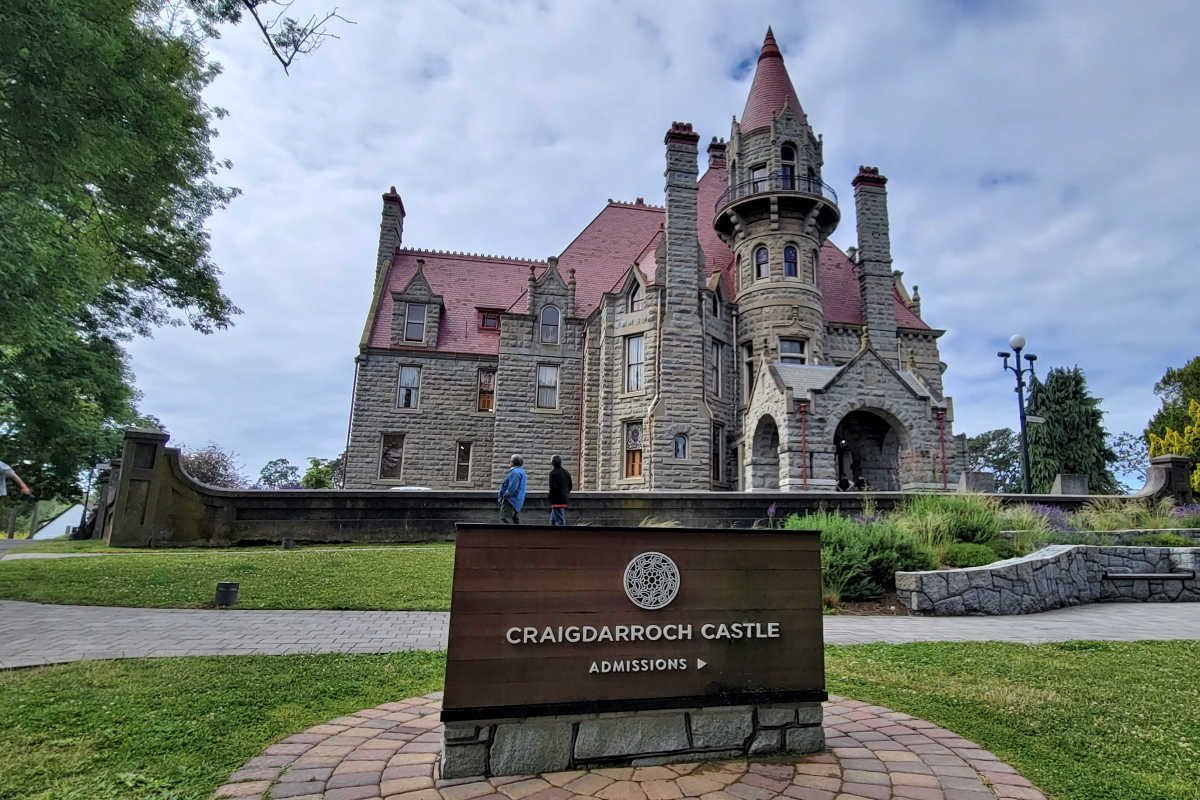 Located 2 km from Victoria Harbor, a tour of Craigdarroch Castle provides a glimpse into the lives of the Dunsmuir family. The Victorian estate exemplifies wealth with its four storeys and 39 rooms. Sitting on prime real estate on a hill, you can enjoy spectacular views from the top floor.

The home was built in the late 1800s by Robert Dunsmuir, considered the wealthiest man in Western Canada. Some of the rooms feature beautiful stained glass, and intricate woodwork and are furnished with period pieces.

Throughout its history, the owners had modified the rooms to act as a military hospital, a Victoria College, and a music conservatory. Craigdarroch Castle, and neighboring Hatley Castle, are two magnificent Canadian castles worth exploring. 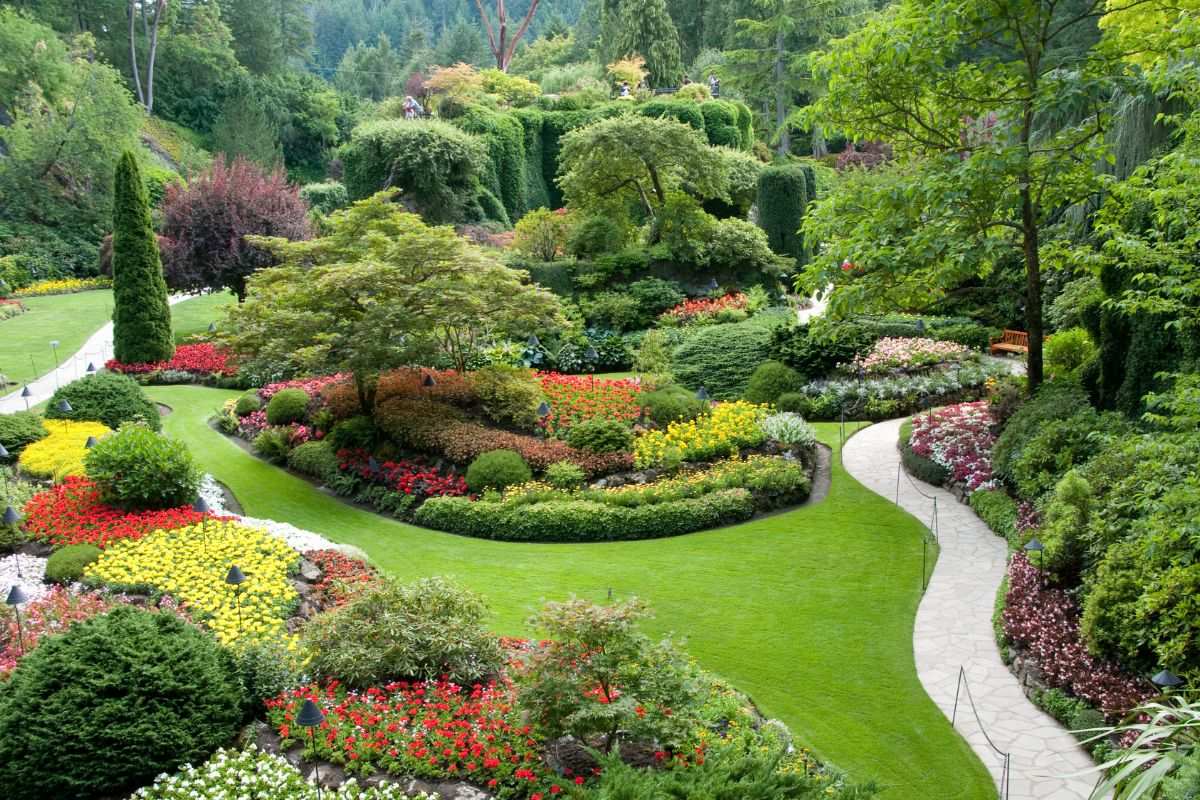 There are many North American gardens that give you that wow factor, and Butchart Gardens is one of them. Located in Brentwood Bay, 30 minutes north of Victoria, the gardens are a National Historic Site of Canada.

In spring and summer, the 55 acres bloom with an explosion of color, but the Sunken Garden is its jewel. But this isn’t a destination for just two seasons. In the fall, the Japanese Garden radiates in tones of red, orange, and yellow.

In December, while the flowers hibernate, the park comes alive with festive lights, Christmas carollers, and scents of the holidays. It’s no wonder Victoria is known as the “city of gardens.” 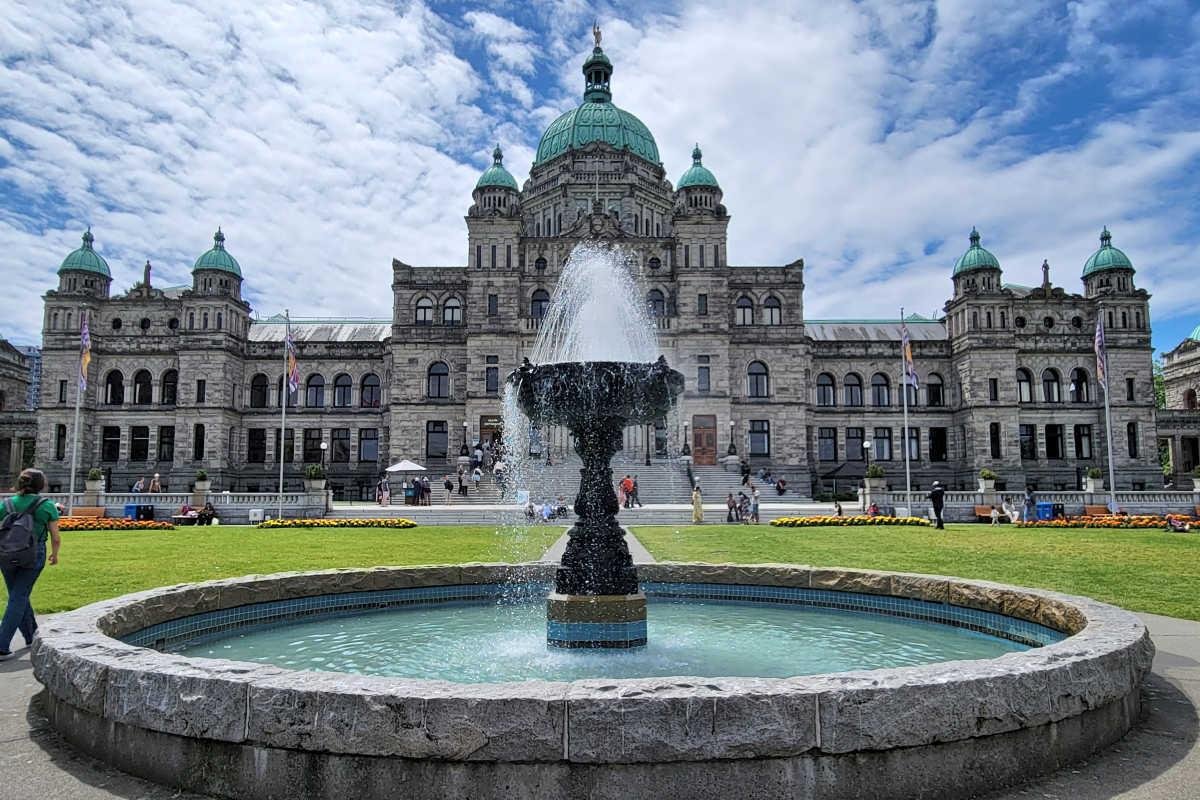 You can take a complimentary tour of the BC Parliament Buildings from Monday to Friday. The tickets are available at the entrance and are available on a first-come-first-served basis.

On a 45-minute tour, you’ll admire a carved canoe in the Lower Rotunda and proceed upstairs to the Memorial Rotunda, dedicated to those who lost their lives for their country.

The pinnacle of the tour is seeing the Legislative Assembly of BC. 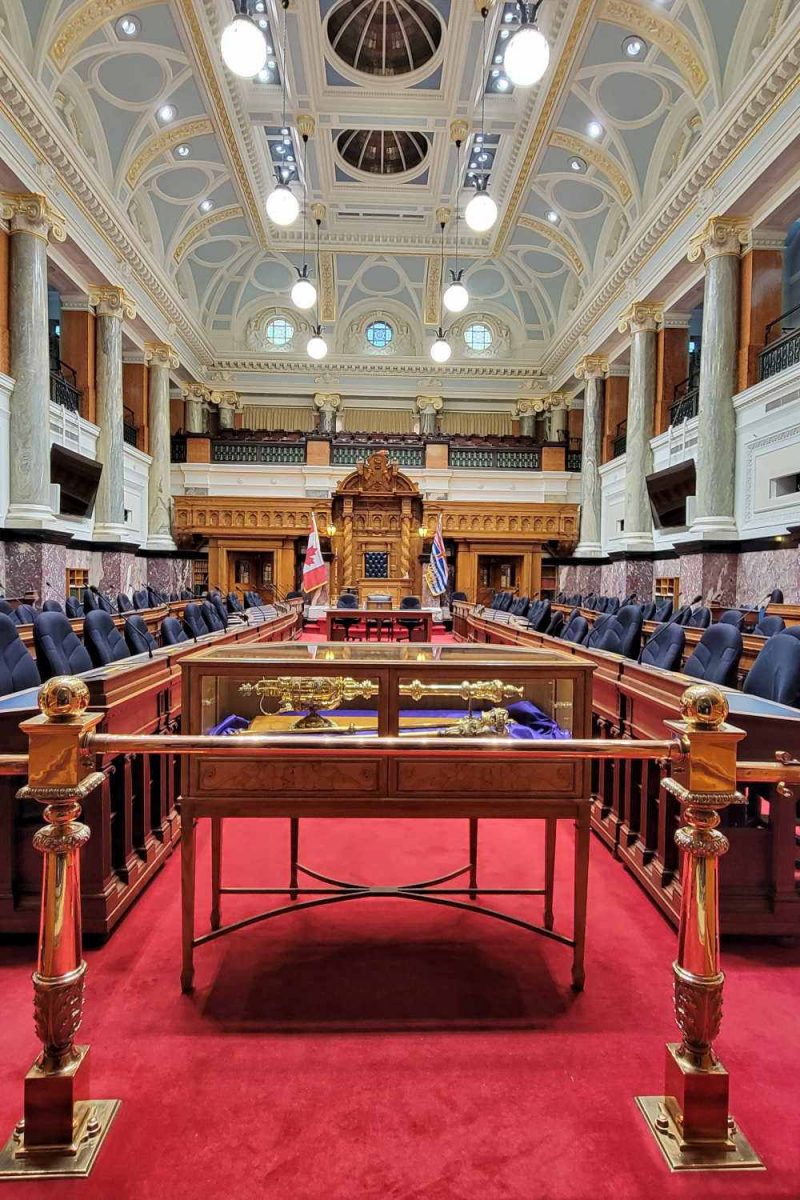 While you can’t enter the room, you can see where the members make all the decisions and where British Columbia passes its laws.

4. Have Tea At The Empress Hotel 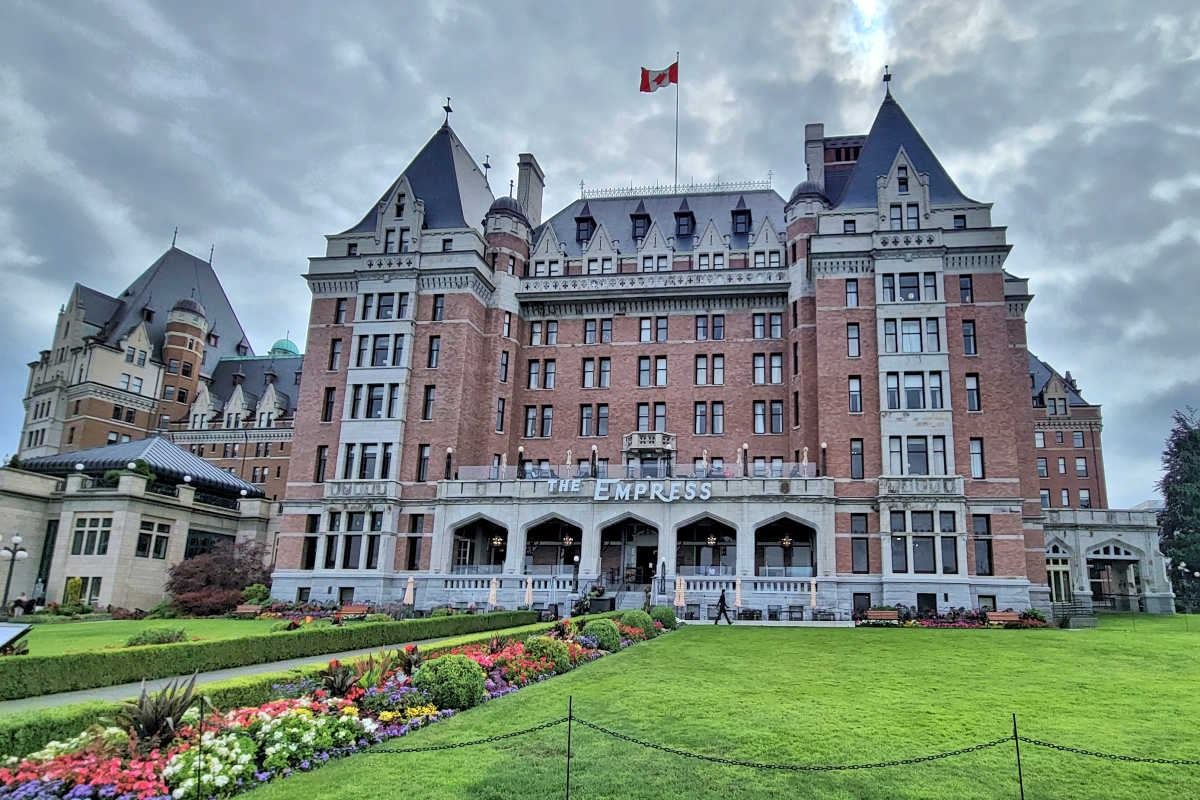 Located on Government Street, the iconic Fairmont Empress Hotel has served traditional afternoon tea for over a century. The ritual, which is not just tea, but an entire meal, consists of finger sandwiches, scones with strawberry jam and clotted cream, and delicate pastries.

Accompanied by the finest globally sourced teas, you should enjoy the occasion leisurely. Like lavish afternoon tea in famous London establishments, expect this tea to set you back around CAD 100 per person without champagne.

While quintessentially British, tea at the Empress will double your memories of visiting Victoria, British Columbia’s capital.

5. Have Lunch At Fisherman’s Wharf 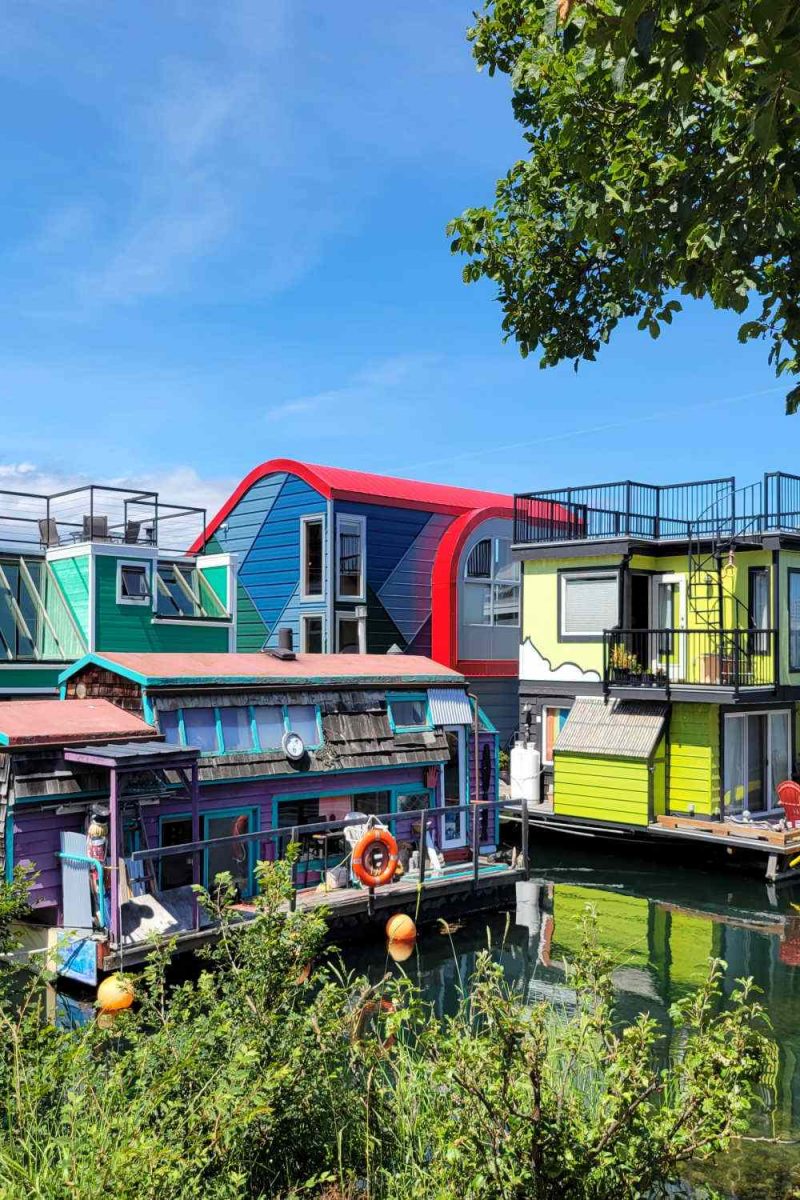 You can catch a ferry across the harbor, grab a brew, and enjoy some yummy seafood there. It’s a great place to people watch, and you may even spot some harbor seals, sea lions, or a heron trying to catch dinner.

While fish and chips is the popular faire offered by most eateries, Puerto Vallarta Amigos serves Mexican, Pirate Pizza has delicious pizzas, and Coco grill offers Polynesian-flavored seafood. Be sure to leave room for Jackson’s ice cream, especially on a hot day.

6. Take A Tour On The Harbor Ferry

The harbor ferry provides scenic tours of the inner marina, which allows you to give your feet a rest. You’ll learn the history of the busy harbor as you watch the traffic on the ocean highway. With fishing boats, tour boats, ferries, and float planes, it’s an orchestral maneuver of ocean-going ballet.

In the winter, the harbor comes alive with the twinkling of fairy lights. It’s the ideal time to take a Harbor Lights tour. You’ll enjoy the festive lights and a 3D Child’s Winter Story, all from the heated cabin of your tub-style boat.

The waters of Vancouver Island are prolific with whale species. Due to its population of resident killer whales, it’s considered one of the best places to whale watch along the west coast. May to October is peak whale watching season.

The top tour company, Prince of Whales, offers year-round tours and guarantees sightings. Most travelers come to see the orcas, but humpbacks, minke, and gray whales are spotted too.

Tours leave from the harbor on the waterfront, so you won’t need transportation to get to your touring vessel. 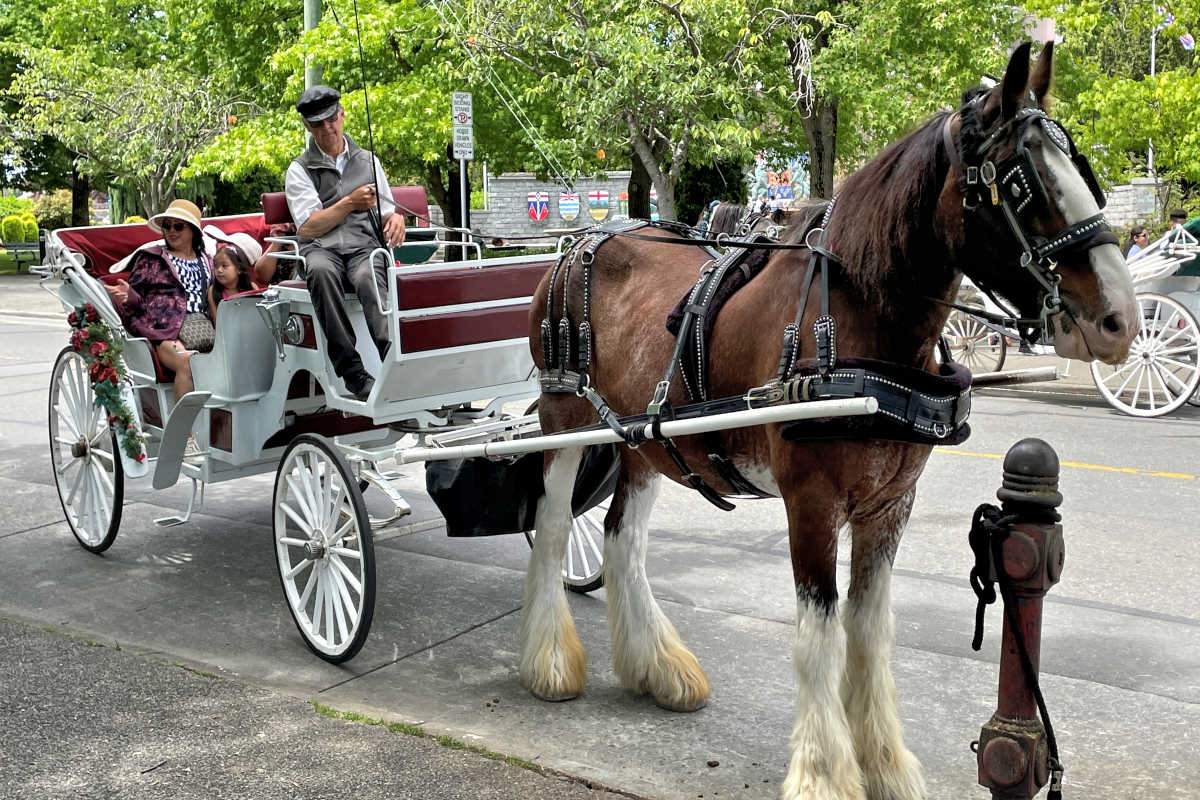 A horse carriage ride has become an iconic attraction in Victoria.

Victoria Carriage Tours and Tally-Ho Carriage Tours provide service around the harbor, for visitors to see the capital in an open-air carriage pulled by a retired draft horse. Carriages can seat up to six, and excursions start at 15 minutes and up to 90 minutes.

Both companies use Belgians, Clydesdales, Suffolk Punches, and Shires to pull their carriages. They choose these horses for their gentle demeanor, trust in people, and friendliness.

9. See The Sights On A Hop-on Hop-off Bus

Hop-on hop-off buses are used in many cities and provide an easy way to see the sites. They are beneficial for the mobility challenged.

You’ll enjoy the ride on a double-decker open-top bus in Victoria. It takes the bus 90 minutes to complete the city loop.

With the freedom to create your own schedule, you can get off the bus at each stop and explore the area before boarding again. The first stop is outside the iconic Fairmont Empress Hotel, known for its luxury accommodations and delicious afternoon tea.

For an additional fee, your ticket includes access to Craigdarroch Castle. 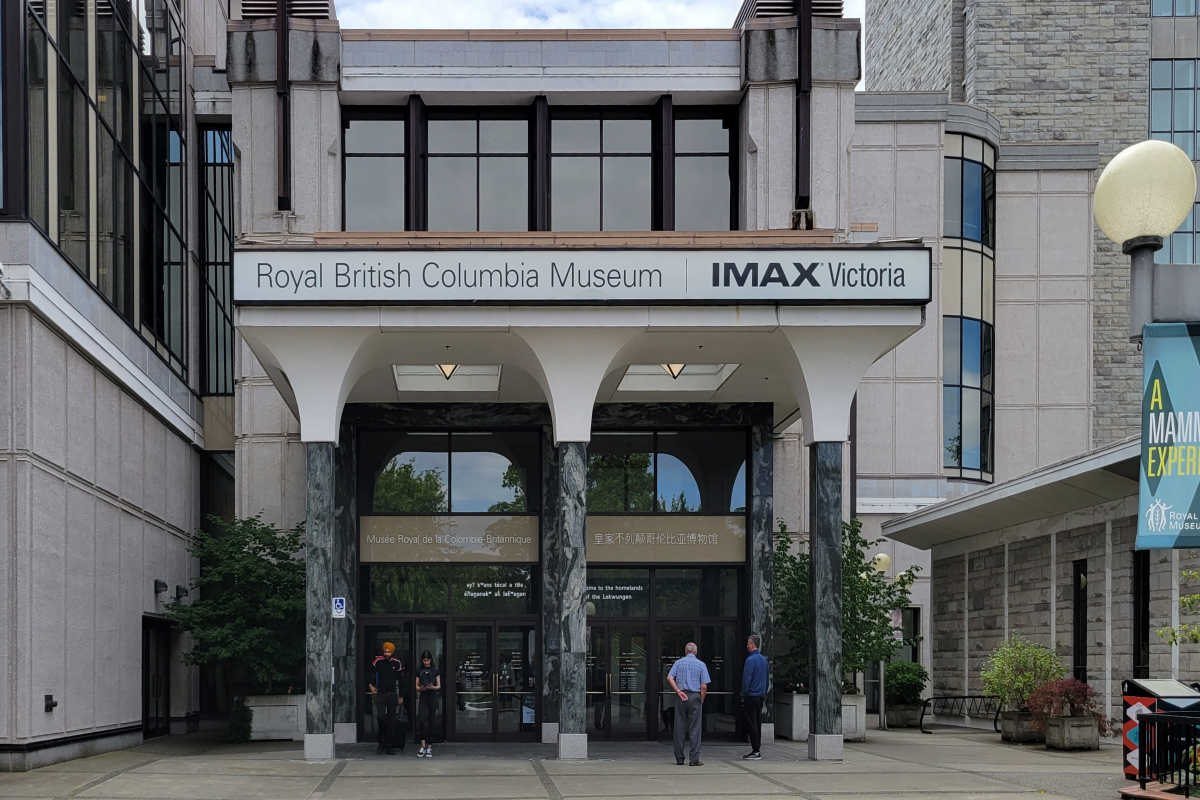 For over 125 years, the Royal BC Museum has been attracting visitors to view its collection of over 7 million artifacts. The museum consists of three galleries, the First Peoples, Natural History, and Becoming BC.

An eye-opening exhibit featured the darker side of Canadian history. It showcases the shameful way the government treated Japanese Canadians after the bombing of Pearl Harbor in Oahu.

The museum has the largest IMAX screen in British Columbia, featuring documentary-style films. The films routinely change, as do some of the exhibits, to keep locals and visitors coming back.

While you can tour Victoria on foot or the Hop-on hop-off bus, renting an e-bike gives you the freedom to create your own schedule.

E-bikes are easy to ride. If you can ride a pedal bike, you can learn the controls of an electric bike in a matter of minutes. The battery assist allows you to tackle hills and ride further without exhaustion.

If you arrive in Victoria by cruise ship, Victoria Bike Rentals offers bikes at the Ogden Point Terminal. The Pedaler and Victoria Cycle BC have storefronts and rentals near the harbor. You can rent by the hour or the whole day.

Sightseeing by e-bike eliminates the need for parking if you’re traveling with a vehicle. That alone can save a lot of money.

Paddling the waterfront gives you a serene way to enjoy Victoria. You’ll escape the crowds and see the views from a different perspective.

Kelp Reef Tours offer 2-to-3-hour tours from Fishermen’s Wharf, with the latter suited for experienced rowers. The tours are family-friendly, and you may enjoy harbor seals, river otters, and seabird sightings.

Alternatively, Victoria Kayak Tours offers convenient rentals on the waterfront. You can choose from a group tour or a self-guided rental. If you don’t have upper body strength, opt for a double or triple kayak instead of the single one. Strength in numbers! 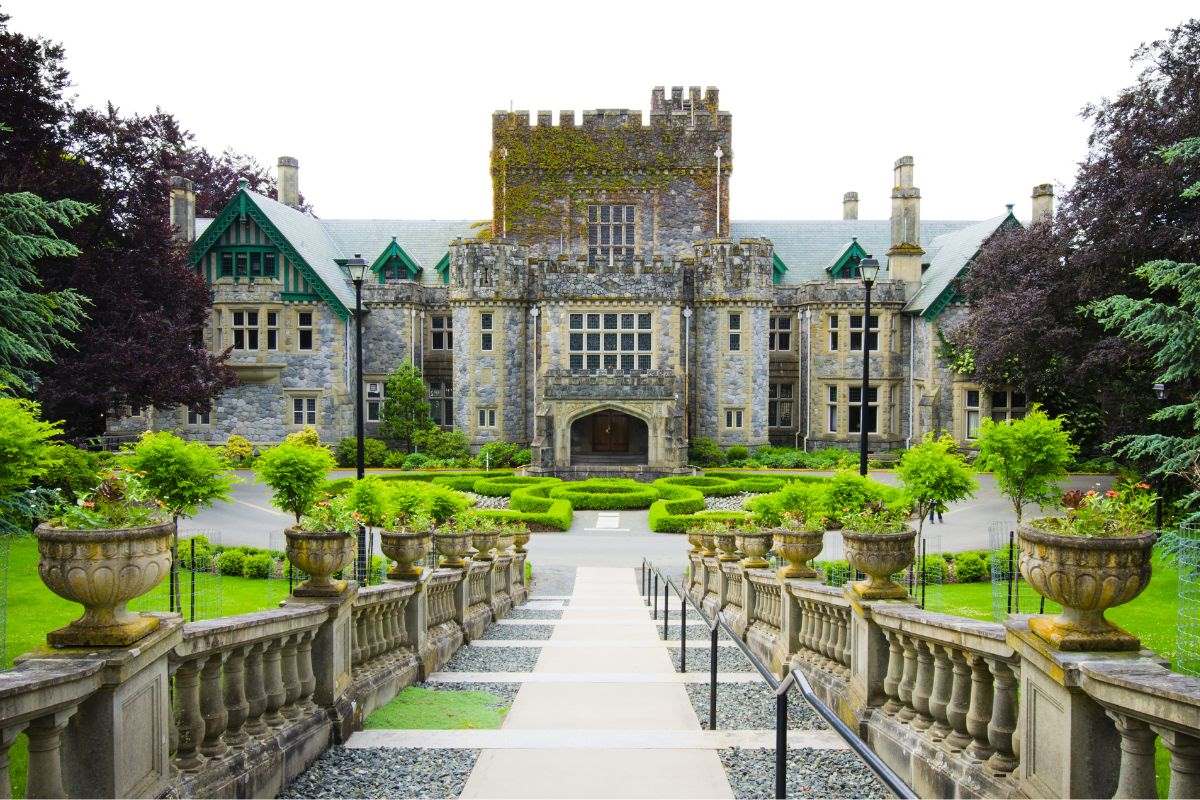 Hatley Castle was the family home of James and Laura Dunsmuir. James was the oldest son of Robert and Joan Dunsmuir from Craigdarroch Castle.

After their deaths, the home served as a training school for military officers. Today, Royal Roads University uses the mansion as its campus. In the basement, visitors can see the Hatley Castle Museum containing some of James and Laura’s belongings.

Outside, you can enjoy complimentary tours of the estate. Guided tours are available from May until September, 10 am to dusk.

Wrap It Up: Best things to do in Victoria Canada

Victoria attracts visitors for its natural beauty, mild climate, and beautiful gardens. Since you can find many popular attractions centered around the inner harbor, you can explore most of them on a walking tour.

By walking rather than driving, you can discover food trucks, beautiful gardens, and hidden gems.

Karen is a Canadian traveler at ForeverKaren. Born to a British Military family, she grew up traveling the world and never lost her desire for seeing it all. With her husband Brian, she loves to seek out new adventures and areas to explore. 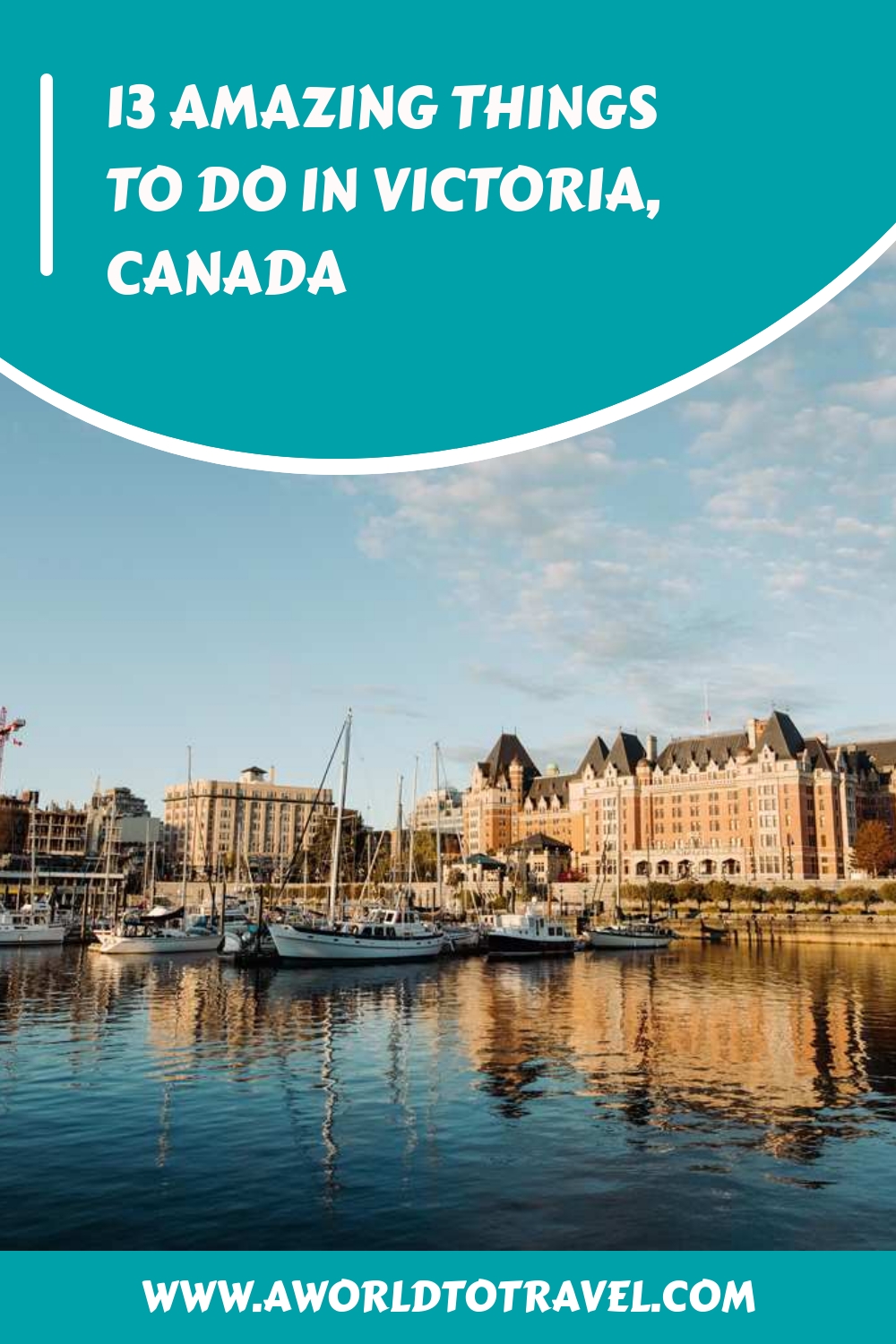