10 Incredible Sights and Things to Do in Guyana

Wondering which are the best attractions, top sights, and overall best things to do in Guyana? From the great outdoors to the cities, we have your back.

Seated snugly between Venezuela and Suriname on the northeast side of mainland South America is a small country known by the name of Guyana. Known as the third, smallest country on the continent with the second smallest population, Guyana can be easy to miss among the large titans in South America. It would be a mistake to ignore this small nation. Rich with colorful culture, friendly people, breathtaking landmarks, and diverse wildlife, Guyana has a lot in store for those that choose to visit it! 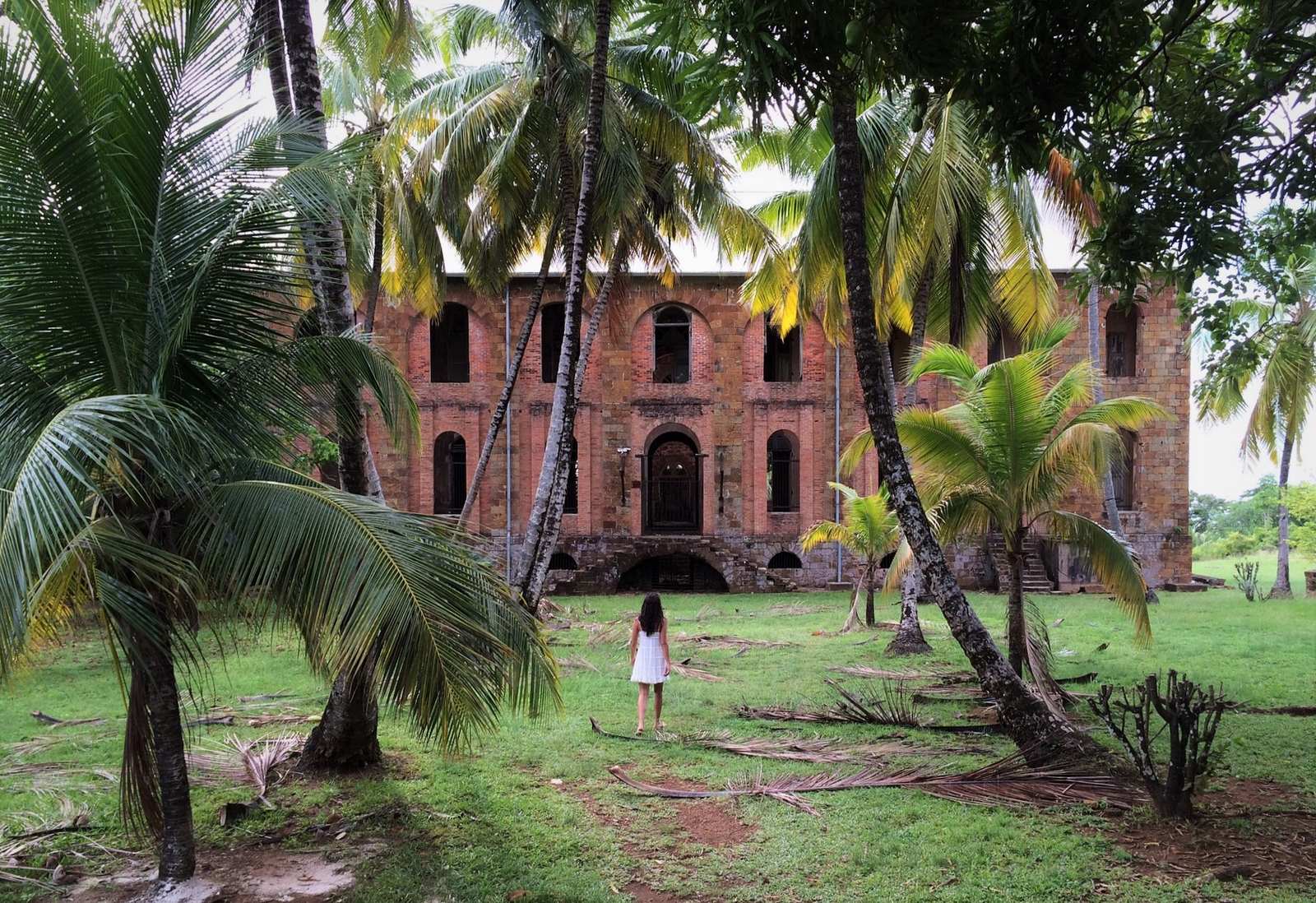 Even with the recent boom in tourism in the past years, Guyana’s tourism industry has fallen behind compared to its larger neighbors. Due to a combination of government policies, negative perceptions, and lack of attention, not many tourists visit Guyana even today. Recently the country has increased its efforts in widening its tourism industry while at the same time keeping the goal of sustainable tourism.

With how much Guyana has to offer, tourism is looking to rise as more and more people discover the wonders of the country. When planning your next trip, it’d be a good idea to consider giving this English-speaking (yes, Guyana is the only country in South America with English as its main language!) country a try.

Here are 10 incredible things to do in Guyana that you shouldn’t miss during your visit!

A mixture of African, Creole, Chinese, European, Amerindian, Portuguese, and East Indian flavors awaits those who want to try out the local cuisine of Guyana. This can be attributed to their history.

Being colonized by the Dutch and French before becoming a British colony, Guyana has felt the arrival of many different people from across the globe throughout the centuries. This diversity of demographics is now seen as a source of pride for the country, with its national anthem referring to itself as “The Land of Six Peoples”.

With such a massive influence on the small country, it has become the foundation of the Guyanese culture that it is today.

Cassava and sweet potato are some of the main sources of carbohydrates in Guyana. When you’re there, make sure to try out their cassava flatbread. Made from drying grated cassava into flour, these round pieces of flatbread have a chewy texture and nutty taste. It is even more delicious when topped with some peanut butter or sliced avocados.

The flatbread goes best with Pepperpot, Guyana’s national dish. A stew of Amerindian origin, Pepperpot uses meat, cassareep (a bitter cassava extract), cinnamon, hot pepper, and vegetables to create a dark, hearty stew. The Guyanese also love their curry, being one of their most popular dishes, as well as cook-up rice (legumes, meat or fish, fresh herbs, and rice cooked in coconut milk).

When you’re done eating, you can wash it all down with Guyana’s many fruit drinks or try out some of their more interesting drinks such as Ginger Beer, Mauby (a drink made from tree bark!), or Sorrel.

Experience the Lights of the Diwali Festival 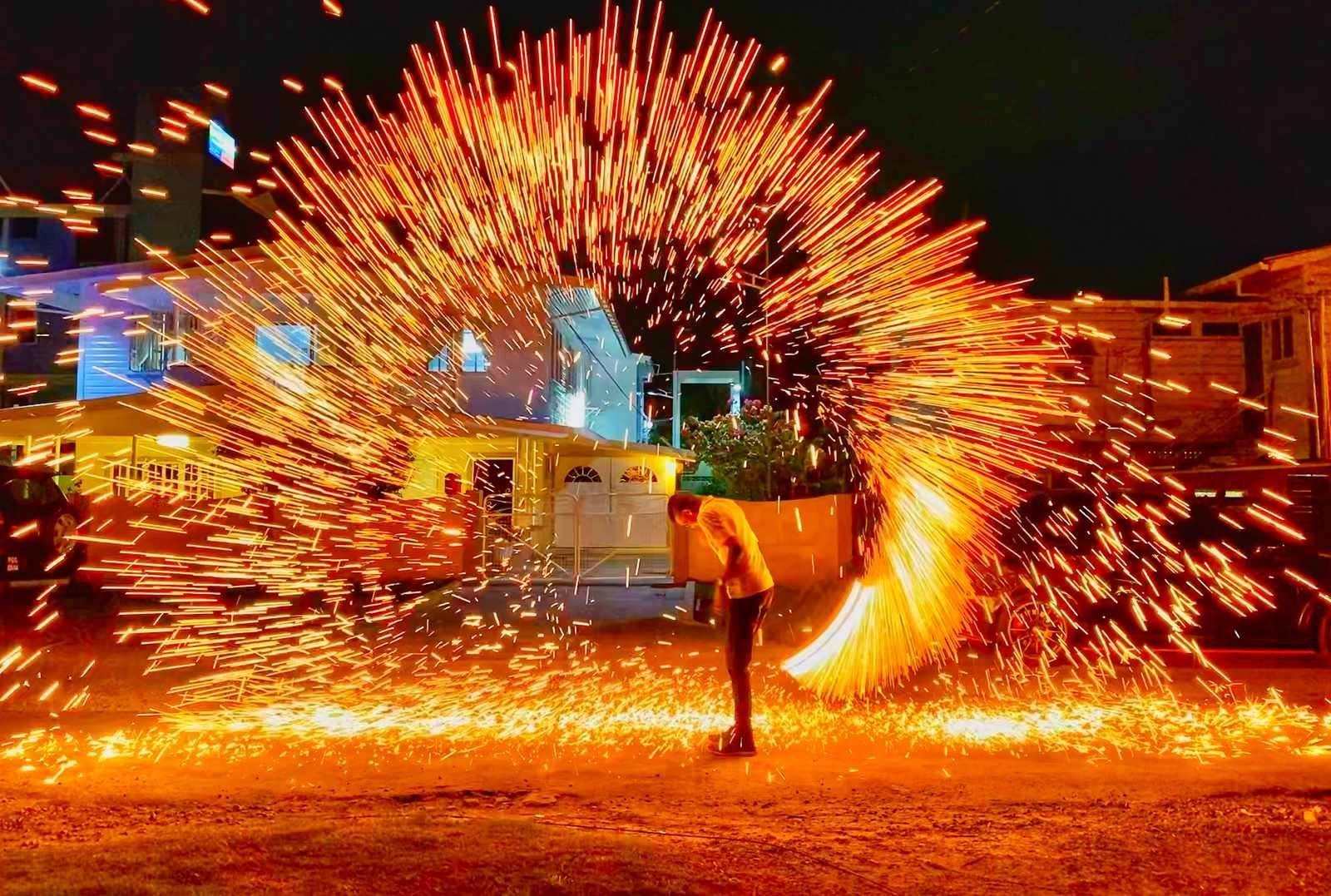 Guyana’s culture is diverse and varied, and this extends to their national holidays as well. Due to the number of cultures that make up their population, Guyana’s national holidays tend to be religious ones. The Diwali Festival of Lights is just one of the many festivals brought by the varied cultures across the globe.

In Guyana, a beloved way of celebrating the Festival of Lights is with the Dharmic Sabha Countrywide Motorcades. This is a tradition that started in 1974 where the motorcades began humbly with only a few lit vehicles and horse-drawn carriages. But over the years, it has vastly expanded with new lights, complex, beautiful setups, and fireworks.

This adds a unique Guyanese touch to the traditional Hindu festival, a must-see for those that can save the date.

In the Barima-Waini region lies Shell Beach, a stretch of beaches 120 kilometers long and a nesting site for many kinds of turtles. From March to August, the green sea turtle, hawksbill turtle, leatherback sea turtle, and olive ridley sea turtle regularly use Shell Beach as their nesting spot, making the beach an important conservation spot.

Accessible either through plane or boat, one can go and travel to the beach to observe the majestic turtles coming ashore to lay eggs or see the hatchlings make their journey back to the sea. This is a once-in-a-lifetime experience for the avid wildlife tourist.

Shop at the Stabroek Market in Georgetown

The largest city and capital of Guyana, Georgetown is a sight to behold. Nicknamed the “Garden City of the Caribbean”, this quaint city is where the majority of tourists will congregate for the duration of their visit.

The city still contains many colonial-style wooden buildings such as the iconic St. George’s Cathedral and the City Hall. The latter is known for its artistic design and was proposed by the government of Guyana to be listed as a UNESCO World Heritage Site. 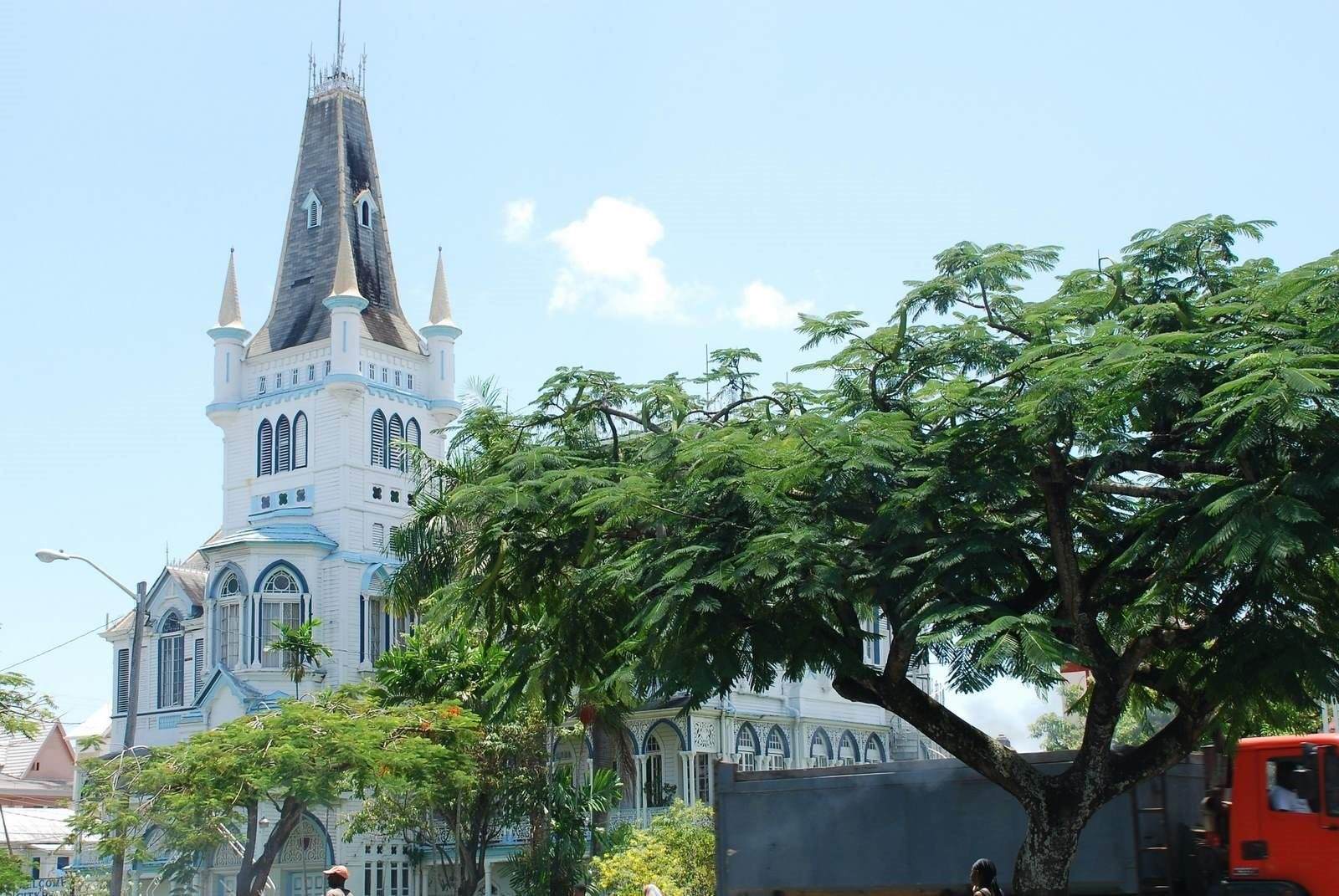 While staying at Georgetown, one must make sure to visit the Stabroek Market. It is one of the busier places in the city. This serves as one of the central hubs of transportation in the area. It is also the biggest market in the city.

It has a large clock tower with a design similar to the Victorian era architecture of Great Britain. That large clock stands as the centerpiece of the bustling market. Even before its official designation, the site has been used as a trading center for many centuries. Housed by a large iron and steel structure, the market is also one of the oldest structures still in use.

From fresh fruits such as grapefruit, pomegranates, mangoes, and avocados, to fresh meat, vegetables, and handicrafts, the vibrant market is loaded with interesting things to buy. Just remember to take the necessary precautions when visiting the market and take care of your possessions.

While staying in Georgetown, a great way to spend your time is to visit the numerous museums in the city. One museum you can visit is the Guyana National Museum, the largest museum in Guyana. This museum was established way back in 1868.

It presents the geographical and archeological history of Guyana as well as its nature and wildlife. It also houses most of Guyana’s general artifacts.

The oldest anthropology museum in Guyana, the Walter Roth Museum of Anthropology, was established in 1974.

Being a non-profit institution, its goal is to collect and conserve artifacts of the ancient cultures of Guyana. The museum is a great place to learn more about the history of the Amerindian cultures of Guyana, with nine different tribes residing in the country today.

Formerly a housing for government officials back in the late 19th century, the Castellani House was changed to the National Art Gallery in 1993. This museum houses Guyanese art and is used as a location for numerous art exhibitions.

It is one of the best places to see the culture and creativity of the Guyanese people.

Just a drive away from Georgetown, the calming Pandama Retreat and Winery is a great treat for the wine lovers out there. It is also a relaxing escape to nature from the large city. The retreat provides a place to stay as well as other recreational activities to enjoy such as a natural blackwater creek and hiking trails.

But perhaps the most unique experience there would be the wines. The Pandama Winery offers a selection of wines made from exotic fruits such as sorrel, soursop, and carambola. There are even stranger flavors to try out such as hot pepper and eggplant.

For those that don’t drink, the winery offers a selection of gourmet red and white wine vinegar. With the abundance of fruits in Guyana, the taste of wines made from fresh fruits is sure to delight you.

Walk Above the Iwokrama Forest Canopy

Traveling back out of the bustling city of Georgetown, experience the diverse wildlife and greenery of Guyana by traveling south to the Iwokrama Forest. It is located in the Guiana Shield and is one of the four last pristine tropical forests in the world! The forest is also known for its high diversity of fish and bats and contains much amazing flora and fauna.

A good way to experience this is to go on a canopy walk in the forest. Located at the Atta Rainforest Lodge, the canopy walk is a series of bridges and platforms suspended 30 meters high into the forest canopy. Walking through the dense greenery, you’ll be astounded to see many reptiles, amphibians, and butterflies that inhabit the Guiana Shield.

Bird watchers will be able to enjoy seeing numerous species of endemic birds such as parakeets, macaws, and potoos as well as the majestic harpy eagle! If you’re lucky, you may also be able to spot monkeys such as red howlers and weeping capuchins. 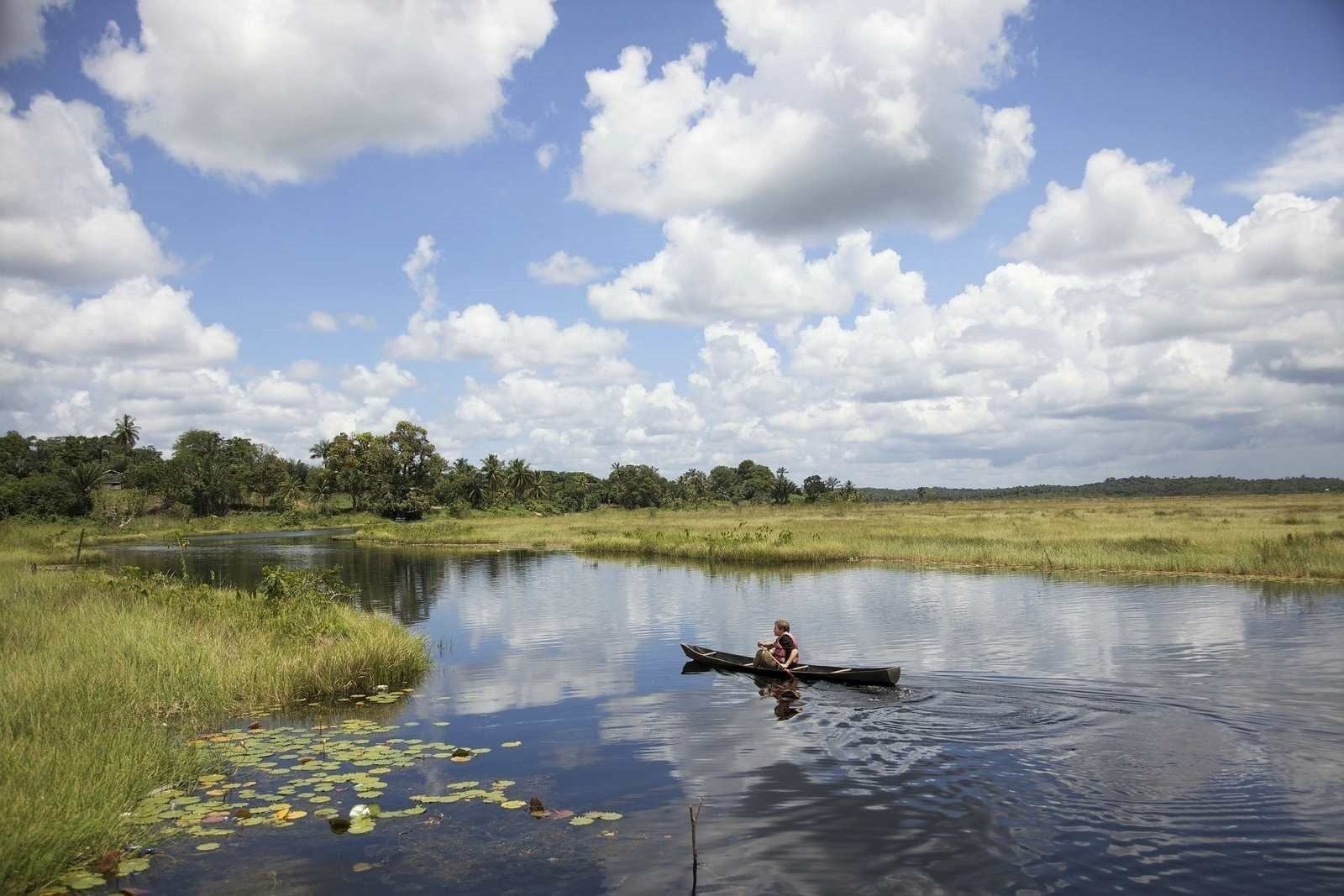 While you could use planes to get to your destination in Guyana, there is also another fun alternative. With the name Guyana coming from the indigenous Amerindian language for “Land of Many Waters”, you’ll soon understand the reason behind this when you are boating down the numerous rivers of the country.

For those more adventurous, there are also many rivers suitable for whitewater rafting and expedition-style kayaking! You should keep an eye out as you travel through the river network for exotic birds, mammals, fish, and plant life.

On the Potaro River 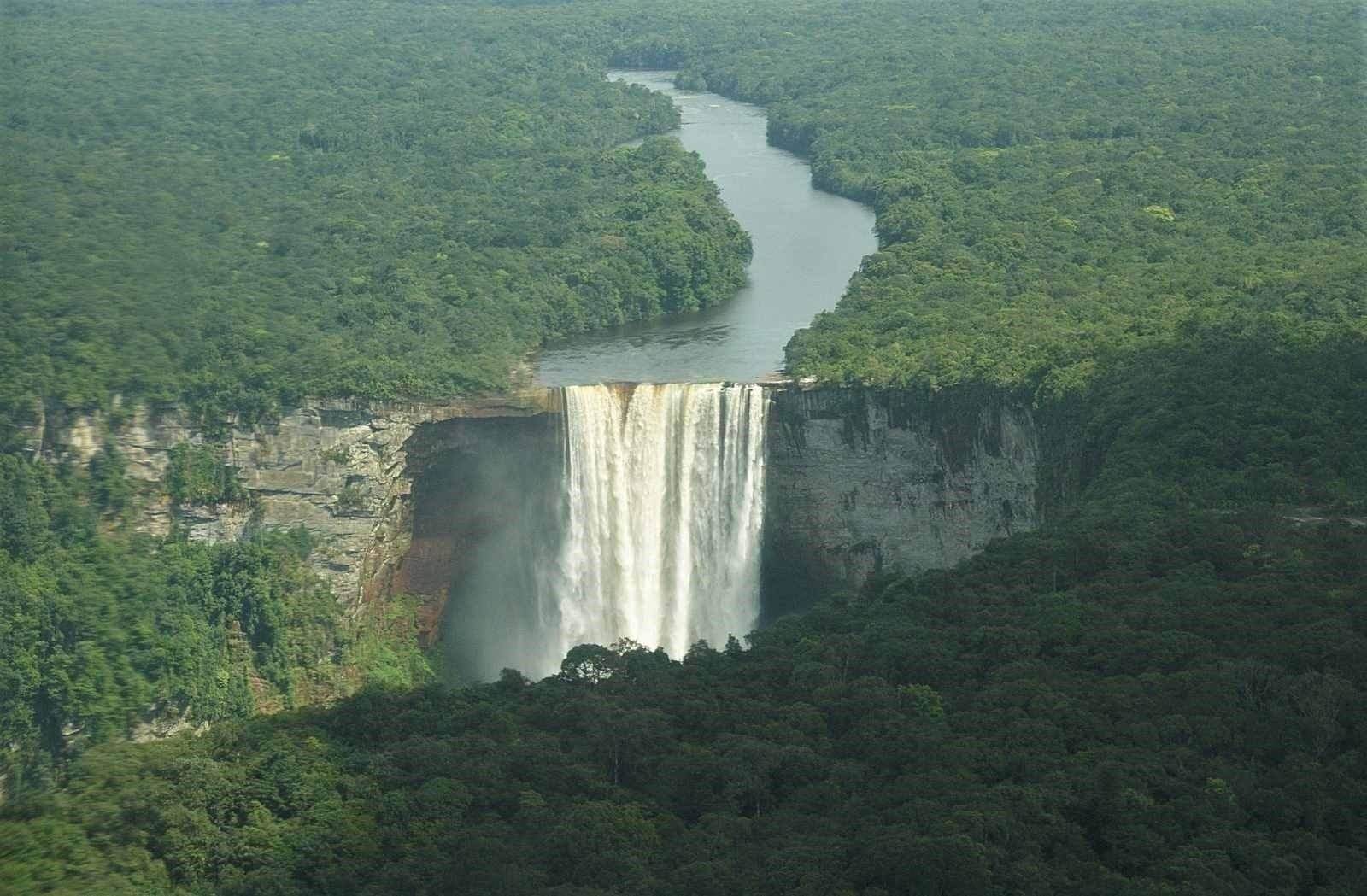 Like the rest of Guyana, the park is inhabited by beautiful and diverse creatures and plants, from the bright orange Guianan cock-of-the-rock to the small, endemic, golden dart frog. Traveling to the Kaieteur Falls is a whole journey of its own.

You can get there by taking a plane from Georgetown or a five-day trek overland (if you are more adventurous). Seeing this remote (and surprisingly not very visited) falls is worth the time and effort.

Look for Apex Predators at the Rupununi Savannah

The savannah contains a high level of biodiversity, being a mix of the Amazon and the Guiana Shield. Here, one could expect to find arapaima, black caiman, jaguars, giant otters, and giant anteaters.

Going to the Rupununi Savannah takes a plane or helicopter ride from Georgetown, then a tour using heavy all-terrain vehicles. During the rainy season of April to June, the heavy floods make touring through the savannah dangerous, so check the dates if you plan on going to the savannah in advance!

From wine sampling to museum hopping to river trekking and savannah hiking, Guyana has something exciting for everyone. A hotspot of biodiversity and untouched wilderness, Guyana is a wonderful country for anyone that wants to experience nature at its wildest.

While still relatively unvisited, it’s only a matter of time until more and more of the world find out about the natural and cultural wonders of this small, South American country.

When planning your next trip, consider being ahead of the curve and marking Guyana as your next destination. Make sure to see these wonderful sights before the crowd starts to flow. It’ll be an adventure that you’ll never forget! 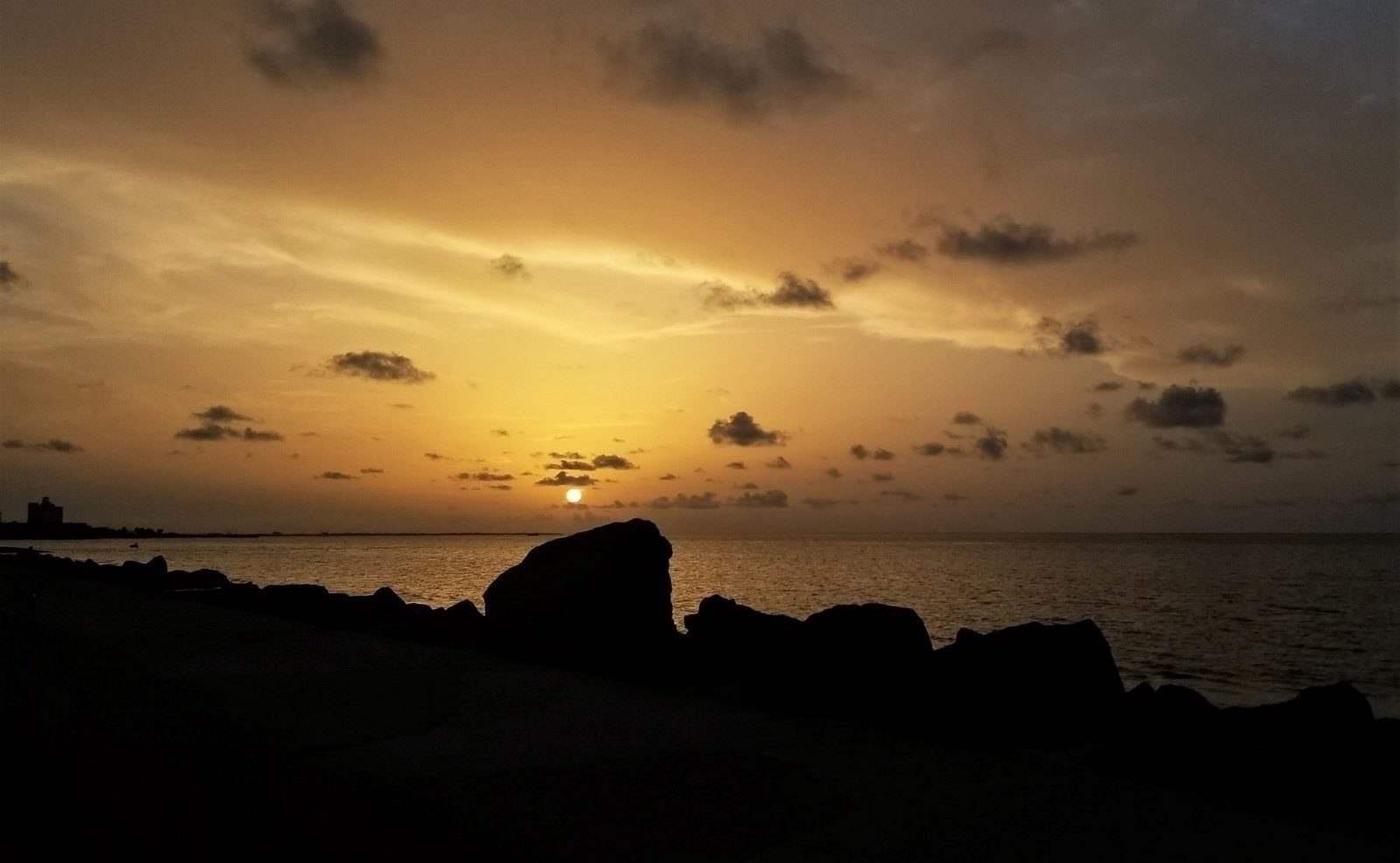 Julien Mordret is the guy behind Exploration Junkie. He loves to share his passion and experiences with travel, nature, and photography. He’s crazy about all things and his explorations are fueled by his unlimited curiosity. 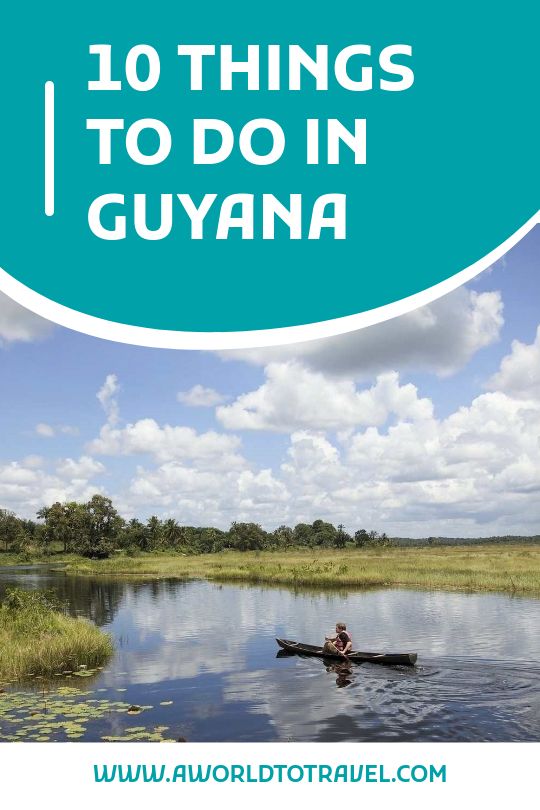