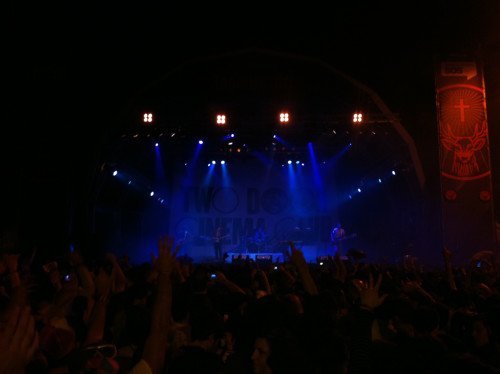 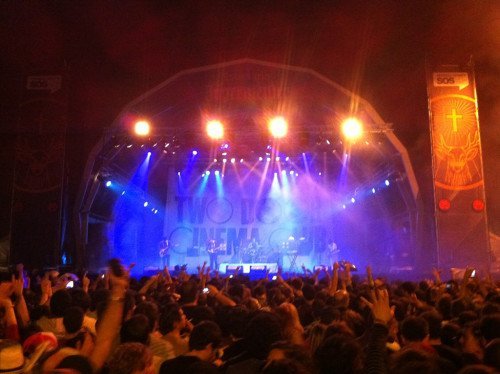 SOS 4.8 is the ultimate experience of a lifetime! Plenty of vans and tents, great bands and DJs, games and attractions, tons of beer and a lot of Jägermeister get together for a couple of days to make music lovers have fun like never before. This festival is very well known for its great line-ups year after year. That’s why it attracts people from every corner of Spain (like me and several friends of mine) and most of them repeat the experience at least once or twice.

Located in Murcia, SOS 4.8 has welcomed some of the best artists representing the current musical trends, both in Spain and abroad. Two Door Cinema Club, Morrisey, MGMT, Vetusta Morla, Lori Meyers, White Lies, Yann Tiersen, The Zombie Kids or Love of Lesbian are just a few examples of what someone interested in going can expect to see and enjoy.

I strongly recommend renting an auto caravan to go there (unless you have one, of course, which wasn’t my case!). The journey itself is an adventure and also the way back, but I definitely advise everyone to arrive one day before. Otherwise, you’ll be dead tired of the whole festival and you’ll find it difficult to stay up to enjoy all the concerts and activities. You’ve been warned! 🙂

Paula Velasco is a translator and former language teacher. She’s also a member of Seis Maletas together with her ex-fellow classmates. Follow them on Facebook. 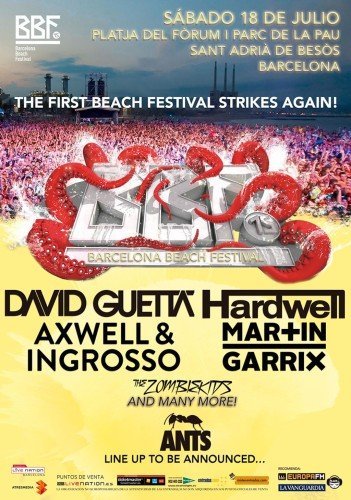 Great if you are into electronic music, you’ll be able to dance off some of the world’s best DJs tunes like Axwell and Ingrosso, David Guetta, Avicii, and Hardwell.

Starting around 6 pm and closing doors at 6 am, it’s a good example of how Spanish people like to party.

For a change, let’s talk about an unusual and not yet produced festival. The White coast that will take place in Alicante in 2016. Why is this a particular festival? Well, because it’s the first festival using the power of the crow founding community in order to make it happen. White Cost has just launched its project in Kickstarter and pushes high to the limit willing to achieve at least 500.000 euros to make it possible. They don’t stop there and they ask up to 2,5 million to bring a bigger amount of international names to the Spanish coast.

I personally like it and think its worth a mention because its a different proposal, I have been always a big fan of empowering the crowd to bring things to life and seeing the White coast happening will open possibilities to other similar events, so, let’s see if this will become reality.

The dates are not closed yet, but you can buy your early bird tickets, and back the project, for only 10 euros per person on Kickstarter.

Valen & Jesper have been traveling for about 3 years now, they settle down in Berlín for a while and from here plan their next adventure. Follow them on Facebook. 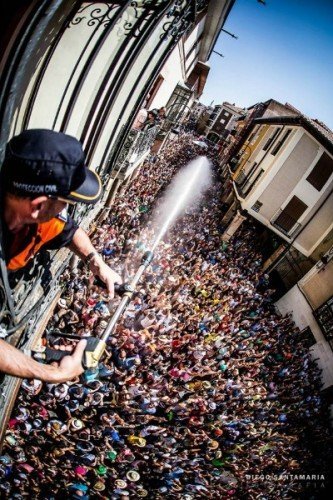 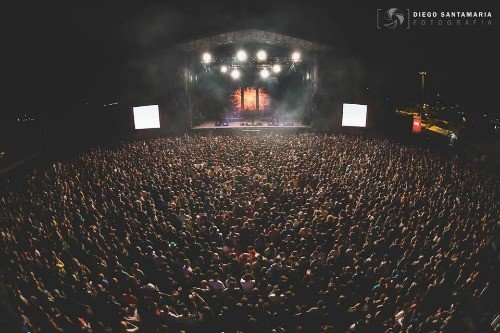 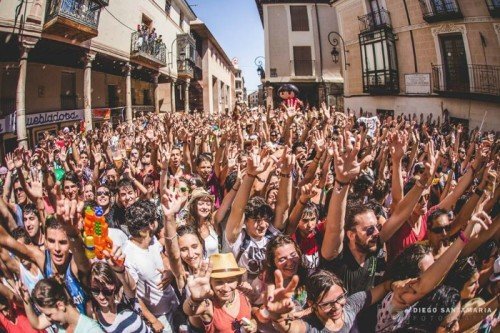 Many would call Sonorama Ribera the main indie music festival in Spain. You can feel it as soon as you arrive, the town is packed with happy-faced music lovers and the atmosphere, truly unique. Added bonus, you can enjoy the region many other faces like its wineries (go for some Ribera del Duero wine tasting!) and stunning landscapes surrounding the festival town. In 2012 this festival was recognized as the best in Spain at the Independent Music Awards and last Summer I finally could attend it for the first time. Love at first sight indeed, I’m already planning to come back next month!

A mid-size techno festival held in the North of Spain every Summer since 1997, where all time party goers mix with ‘Descent of river Sella’ attendees for a couple of crazy nights in Ribadesella, Asturias. Ben Sims, Carl Cox, Richie Hawtin, and Marco Carola are some of this year’s headliners.

We went to 2007’s edition and we’re sure that the essence remains the same. Anyway, it could be great to revisit this one soon. Just to keep up with what’s going on, you know 🙂

Being its taglines ‘Music, Creativity, and Technology’ as well as ‘Advanced Music and Multimedia Art festival’, it is very true that this one focuses on electronic music. Just how I like it!

It was only in 2010 (the edition I attended with LCD Soundsystem, Hot Chip, Laurent Garner, and Booka Shade among others) and 2011 when Sonar brought its goodness to Galicia, establishing Coruña as a 2nd base for a couple of days, parallel to Barcelona’s sessions.

2manyDJs were my favorites, bringing not just me but all the crowd to a happy state of mind as only a few can do. These days, Sonar is still celebrated in Barcelona and sometimes other locations around the world. Highly recommended.

If you ask me to recommend you a music festival in Spain, that would be for sure the Festival Internacional de Benicassim (FIB). It’s located in Benicassim, a picturesque village on the Mediterranean coast of Spain, so you will get a beach holiday into the bargain. Besides, the camping area is part of the experience of the festival.

Be prepared for an awesome weekend with the best of music, FIB is always full of headliners! It will be a one-off experience. 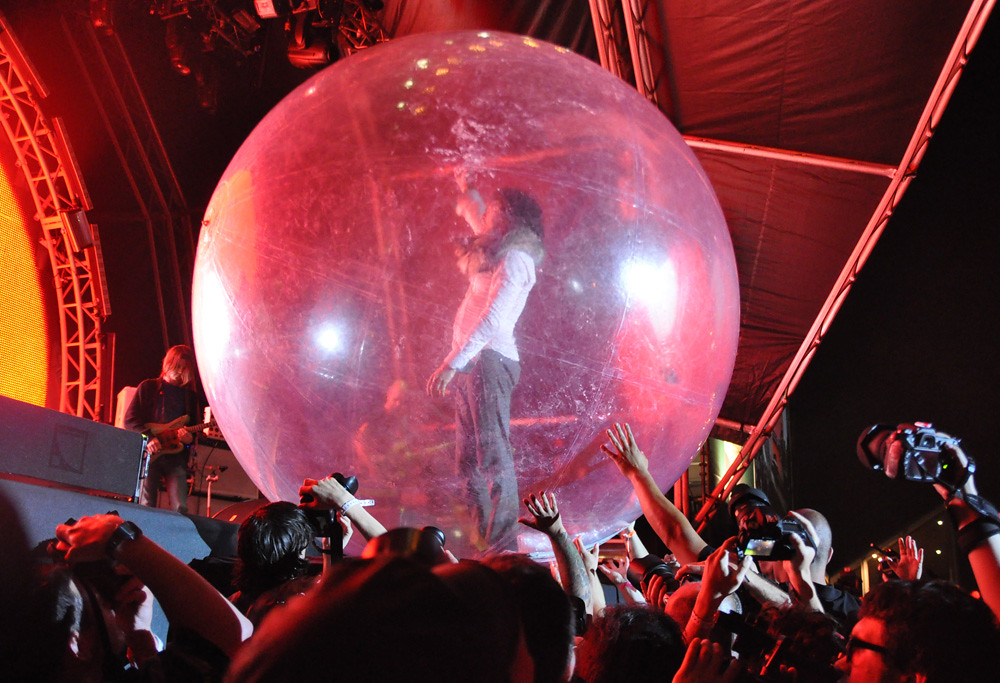 This huge festival takes place once a year in the beautiful city of Barcelona. Located in the Forum District, it has become 15 years old now and has been consolidated as the main hipster festival in Spain. But don’t panic, there are also big names of the music panorama.

As for me, it’s as immense as amazing. The only downside I see is that you will be forced to walk a lot between stages, but it will definitely worth it! 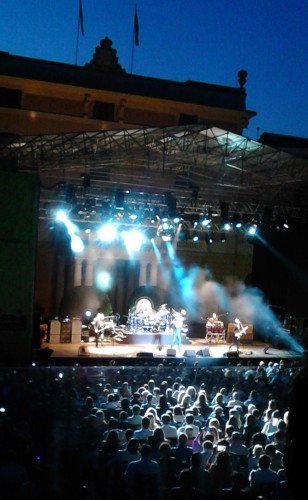 A festival under the stars held in the romantic Jardins del Palau Reial de Pedralbes.

A few days back I had the chance of attending Spandau Ballet’s concert right there as part of this Barcelona. And boy was it elegant. The tunes and the scenography where only great musicians on the stage were needed. The elegance of Tony Hadley and its unique voice.

But not only elegance, we could also feel the fresh air, freedom, romanticism, prestige, life, emotion and mystery.

And as a background, the brilliant Pedralbes Palace facade, signed by Joan Martorell, with gardens that hide secrets like two Gaudi pieces, an ideal place to have a drink and dinner before or after the concert in a Summer night. 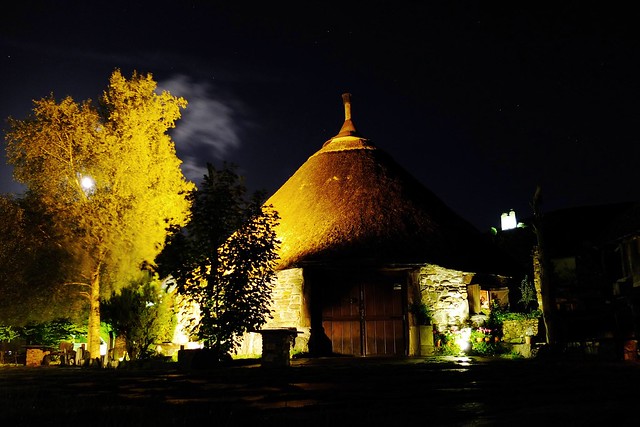 Kids, elders and every generation in between – druids and likewise tribes are welcomed as well – gather in Balboa, a tiny mountainous village of El Bierzo, in Leon, where it seems someone laid a flawless grass carpet just to build the most awesome traditional buildings made of stone and wood on top by a stunning river. Just what you need in Summer.

You won’t find big crowds or highly wasted teens dancing electronic music. Instead, tons of reggae bands and a selected atmosphere where it’s highly possible to end up meeting most of the ravers after camping with them for 3 days.

See you there next month!

WHICH ONES ARE WE MISSING? LET US KNOW IN THE COMMENTS BELOW and if you are a travel blogger yourself, feel free to contact us. We are currently looking for people that attended Bilbao BBK Live, Rototom, Womad, Arenal Sound, Monegros, Decode or any other awesome Festival in Spain to complete the list!

Luckily, this is not the end. Check out the following articles as well and start scheduling your favorite music festivals for this upcoming Summer:

Coolest Music Festivals Around the World