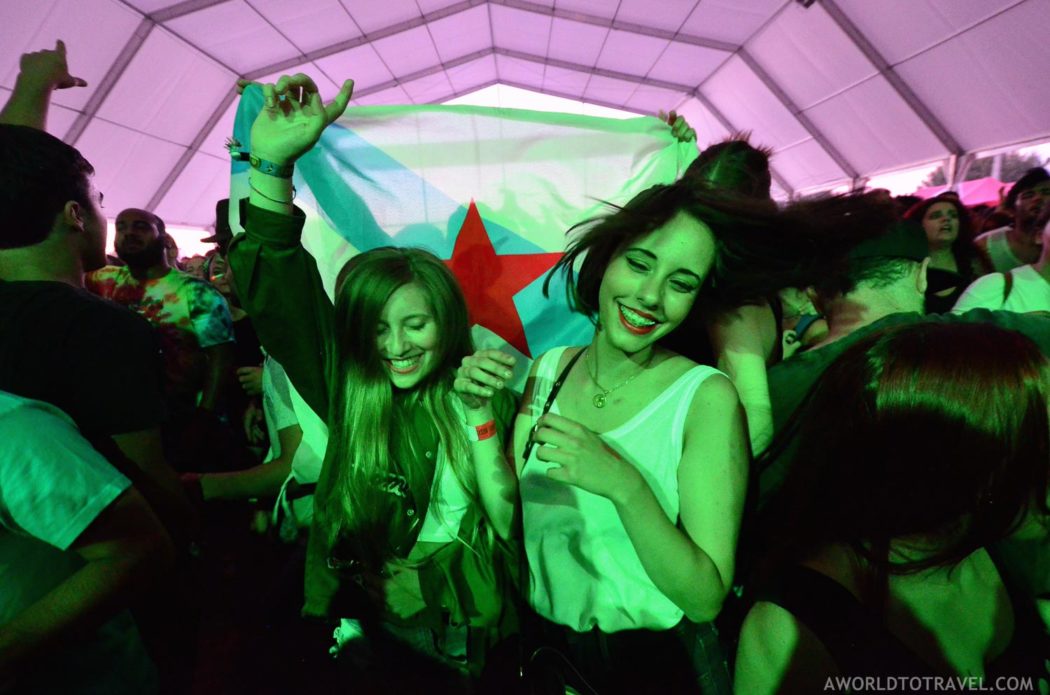 “What a ride!” I thought when my body finally collapsed on my bed after three days without talking with the Sandman.

“You’ll be fine” they said. “Hang in there, you have to squeeze this two days to the maximum man! C’mon!” they effing said. Nonetheless, as I drift again into the realms of sleep, memories of what seemed to be a brutal and rapid flash began to attack my tired brain.

We reached Bueu not as the saying goes (in a boat), but by more conventional means (Jose’s car). When leaving our hometown I had to rush my lunch and get a lightning-fast shower. The heat was unbearable and after exchanging our tickets for straps and setting up in the already packed to the brim camping area; it was finally the time to grab a beer and chill before the first gig.

In fact, I relaxed so much that I missed the first two bands Chotokoeu and La Pegatina. My colleagues said the latter one was okay and although the band didn’t really seemed attractive to me, they were one of the main acts nonetheless.

The always great and powerful Lendakaris Muertos, an infamous punk band from the Basque Country, were the highlight of the day for me: it was a lot of fun to sing along their lyrics where they talk about drugs and social problems in a half-serious half-humorous way combined with a pure trashy approach to instrument-playing in the vein of the best Dead Kennedys.

Heredeiros da Crus, a veteran from our childhood was next in line. The concert was pretty standard, it was the first time I got to see them (which is pretty amazing, taking into account the fact that since their reunion they have played pretty much everywhere) and I was kinda disappointed, really discreet antics (for their legendary standards) and the song selection was pretty meh.

Closing the gigs was La Sra. Tomasa, maybe the revelation of the fest since they made us dance like madmen until 4 or 5 am with aggressive rhythms and a dash of funk mixed with reggae and ska.

After the concerts and with still enough energy to go, we approached a local bar to try and drink away our time until the sun was high up in the sky, which prove to be a big mistake. After they kicked us out of the bar, I finally reached my tent in the back of the campsite and tried to get some shut-eye. The punishing sun cut my hopes short and gave me a dosage of reality: 32ºC at 9.30 AM made any sleep impossible.

Like vagrants we wandered from bar to bar, drinking beers and having a much-needed pork sandwich for lunch, trying to find refuge from the rising heat to no avail. Spending the entire afternoon and evening in the pubs, I had no time for a break and went sleepless for the rest of the day.

Going to the showers proved to be a huge mistake as they were very far away from the camp and the walk was absolute madness. After the shower I instantly got all sweaty again: a real waste of my time and energy.

The second day started with The Skarnivals, a local band I wasn’t quick enough to see play. Here’s a video one of their fans sent us.

And the night continued amazingly with Soziedad Alkoholika, another Basque group who are one of my favourite bands from my teenage years. Politically charged lyrics and a pounding sound turn the stage into a blast from the past.

Things just got hectic with Boikot, pogo dance and punk hairstyles sprang from the front to the back of the stage.

And after that, a huge break and my most anticipated band of the fest which ended in disappointment for the rest of my friends: the Uruguayan band La Vela Puerca. Got really sentimental there, singing each and every song with my Andalusian friend who also was a fan of the band. Lots and lots of Uruguayans dressed with Peñarol shirts and armed with flags bounced with us during the entirety of the gig. Amazing music and a lot of genuine fun, the best of the fest no doubt. The rest of my companions didn’t agree at all, going as far as retiring early for the day after the landslide into softer music that was the change from Spanish punk to Latinamerican rock.

Closing the fest were the (again) Basques Vendetta, who blend a mix of ska and hard rock to which we jumped until the final chords of the last song. While writing this I’ve just realized how many Basque bands attended this fest. Neat.

People at the after hours bar were already waiting for us to chug the last beers. A guy passed out in the chair next to us, no one seemed to know him and they just let him be there, unconscious after saving his life by avoiding the abundant puke he spurted from time to time collapse his lungs (the infamous rock n roll death). Really disgusting if you ask me.

To sum up, I went to Son Rias Baixas Festival 2016 in Bueu and didn’t sleep for two days straight while bouncing to some of the best punk and hard rock the Spanish language has to offer. The drinks were great, the company amazing and the true protagonist was the asphyxiating heat. Would I go again in the same ride?

Words: Lois Agrelo Arxóns is a Galician writer from Noia who also happens to love music. He writes poetry, narrative, scripts, and articles; you can catch a glimpse of his work in The Ganja Papers (in Galician, also an English version). He also makes music as De Tranks . Follow him on twitter @jodidoavogado and Facebook The Ganja Papers