Amazing Places to Visit in Kazakhstan in 2023

Looking for places to visit in Kazakhstan? Look no further than this comprehensive guide to the world’s ninth-largest country.

From the ultra-modern capital Nur Sultan (formerly known as Astana) to alpine Almaty, desert Aral and the Caspian resort of Aktau, there is enough to keep avid adventurers occupied for some time.

As well as being a mecca for outdoor enthusiasts, Kazakhstan offers plenty for those searching out more interesting destinations along the old Silk Road and in Central Asia. 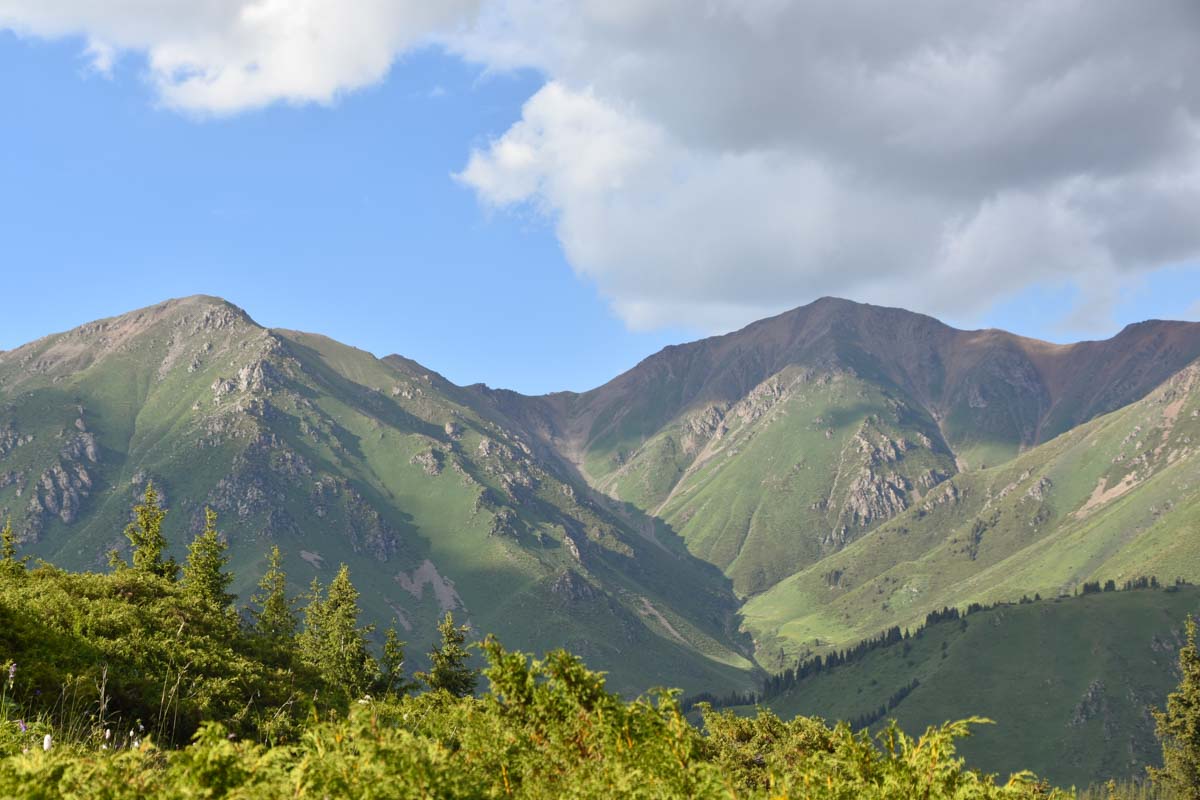 The country is home to the Baikonur Cosmodrome where manned space missions start off, a former Soviet nuclear testing site at Semipatalisnk, and the gulag complex at Karaganda.

Read on to find out more.

Kazakhstan’s land borders opened again on 11th April 2022. This means traveling Central Asia and exploring the Silk Road is almost back to its pre-pandemic routines (with the exception of a PCR test or proof of vaccination). 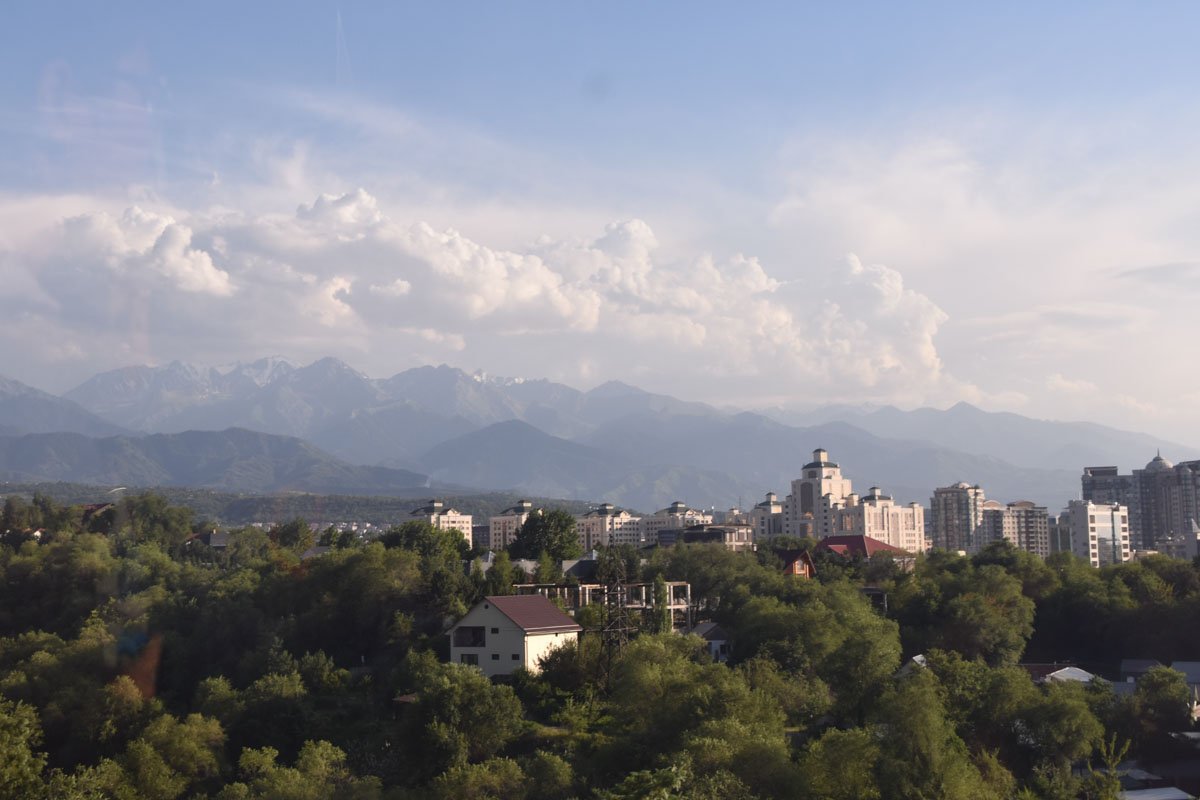 From 11th April it’s possible to cross from Kazakhstan into Kyrgystan, Uzbekistan, and Russia and vice versa.

However, if you are planning on traveling to/from Kazakhstan and neighboring countries, be sure to check the last updates on the land borders.

The land border with China remains closed as China has not reopened for tourism and will likely not do so until 2023.

Update September 2021: Kazakhstan has reintroduced its pre-pandemic visa-free travel regime for citizens of most countries.

Kazakhstan tourism is in its infancy by international standards, but with its extremely hospitable people, food to die for and varied Silk Road landscape of steppe, desert, and mountains, this former Soviet republic can’t stay a secret forever! 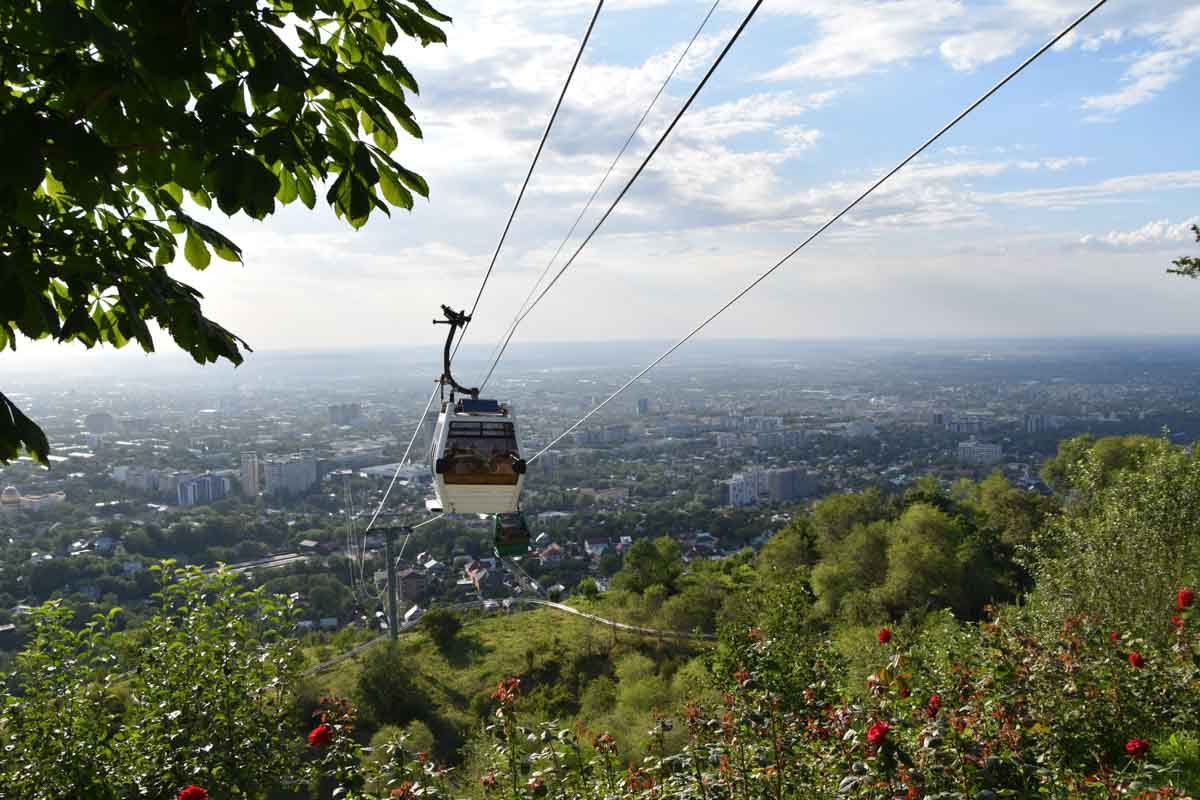 The country’s infrastructure is constantly improving with new roads and high-speed trains cutting traveling times considerably. For example, the journey from the Chinese border used to take over ten hours on terrible roads but now takes just six hours on a brand-new highway.

However, outside of the cities, transport to attractions and scenic spots can be difficult. The best way to see the country is to hire a car. Although it is possible to get around with shared taxis and marshrutkas, it’s not easy if you don’t speak Russian or Kazakh.

Places such as Big Almaty Lake, the Kolsai Lakes, and Charyn Canyon are not linked to Almaty by regular public transport, so it will take a little work to get there (but will be totally worth it)!

Top Places to Visit in Kazakhstan 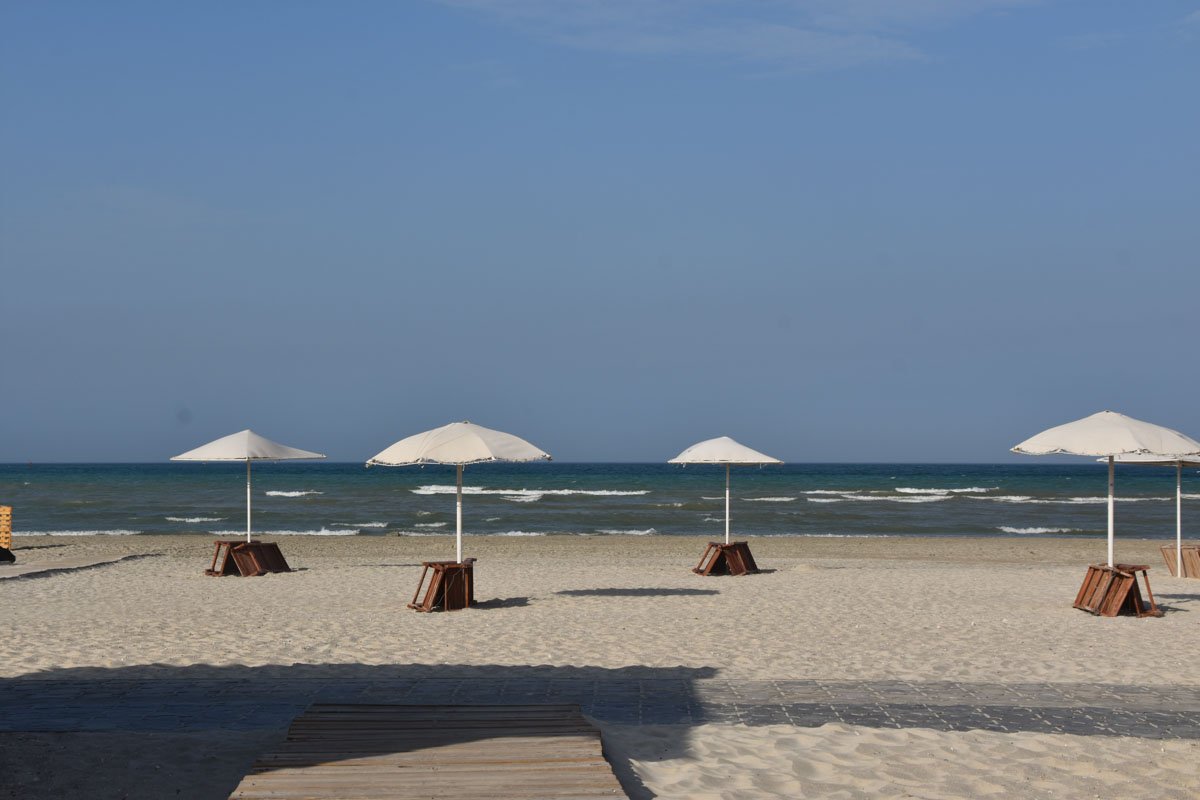 Aktau Beach on the Caspian Sea

You may be surprised to learn that Kazakhstan has its own seaside resort! Aktau is a small city on the shores of the Caspian Sea (really a large inland saltwater lake). A great place to cool off in summer!

As Aktau is a very (VERY) long way from anywhere, it is only worth visiting if you plan on exploring the region, such as the landforms at Mangistau, or you are traveling across the Caspian to or from Baku in Azerbaijan. 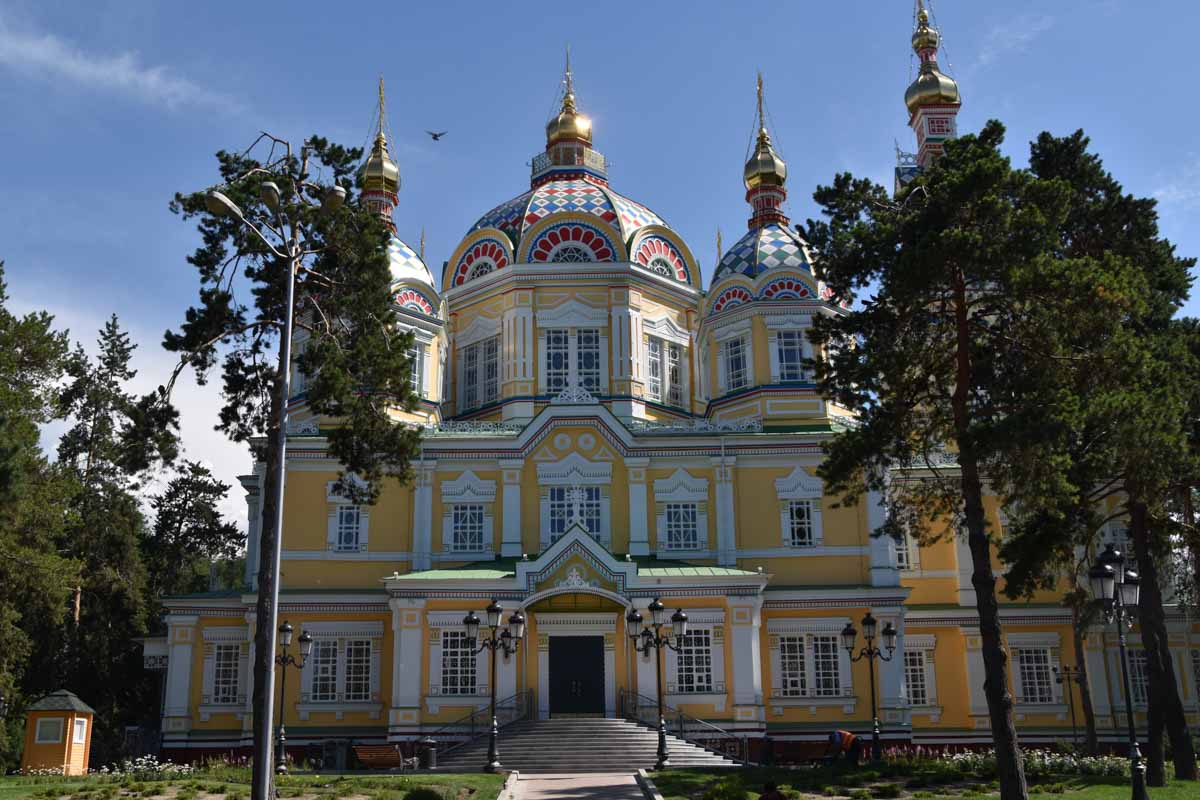 Almaty is the mountainous former capital and beating heart of Kazakhstan. A winter playground and home to Central Asia’s premier ski resort, leafy Almaty is definitely one of the best places to visit in Kazakhstan!

The architecture of downtown Almaty is a lot more Russian than Central Asian, with brightly colored wooden houses, Soviet statues, and Orthodox churches.

The center is home to a vast array of fashionable bars, cafes, and restaurants serving everything from traditional Kazakh to French, Georgian and Japanese! 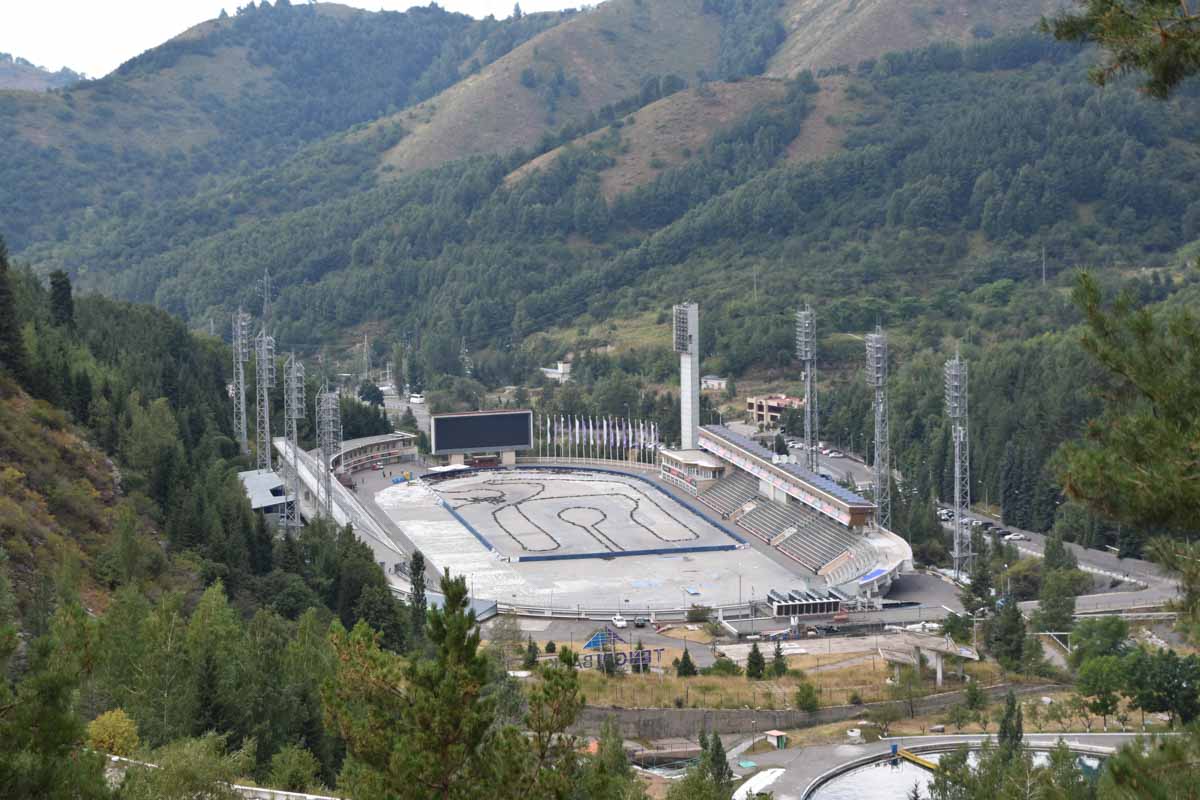 Almaty makes the perfect base for heading off into the wilderness of the Ile Alatau National Park for hiking, camping, skiing, and more. The first mountain trails are only a twenty-minute bus ride from the center of town! 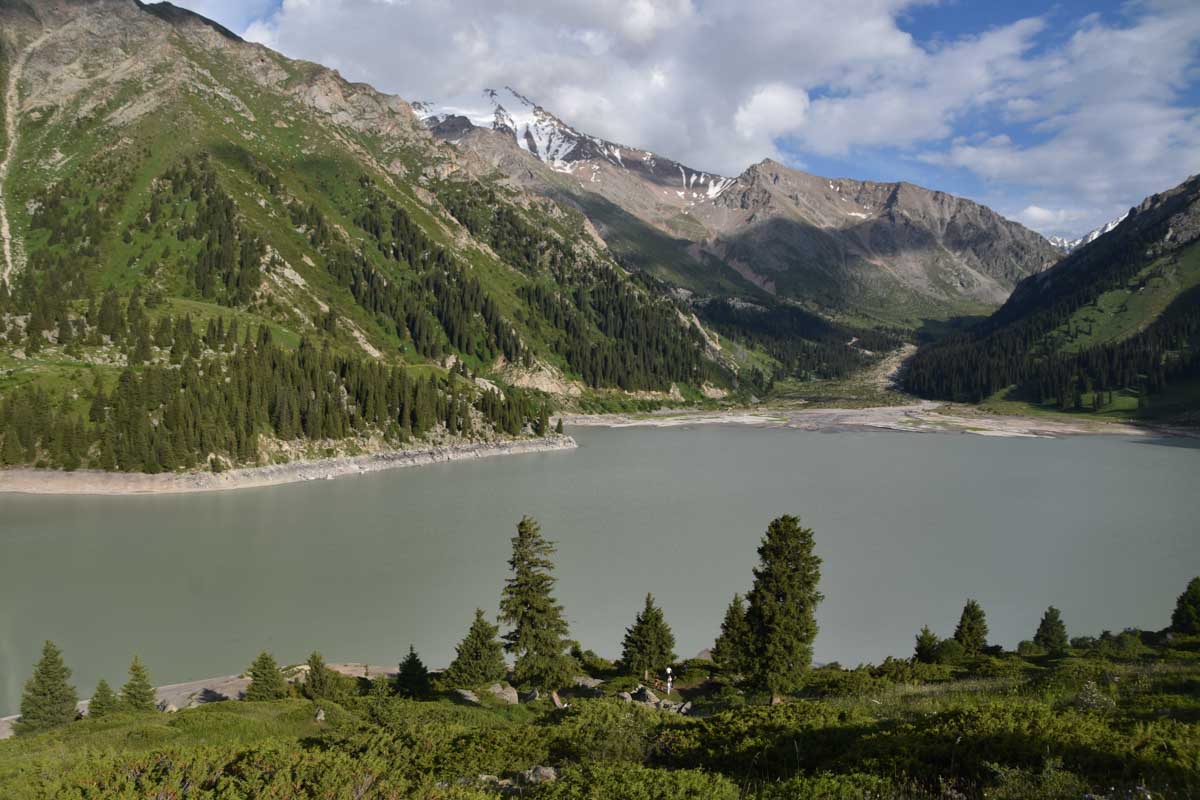 A beautiful alpine lake high above the city. The perfect place for hiking and summer picnics. There is a nearby observatory too. Be aware that the lake is very close to the border with Kyrgyzstan so heed all warning signs and border guards (nothing to worry about).

How to get there: take a taxi, or bus and hike.

Charyn Canyon is located in the desert close to the Chinese border. The 154-kilometer canyon follows the Sharyn River and forms part of the Charyn National Park. At its deepest, the canyon is 300m (almost one thousand feet) deep.

How to get there: self-drive, join a tour or take a shared taxi from Sayahat Bus Station in Almaty. 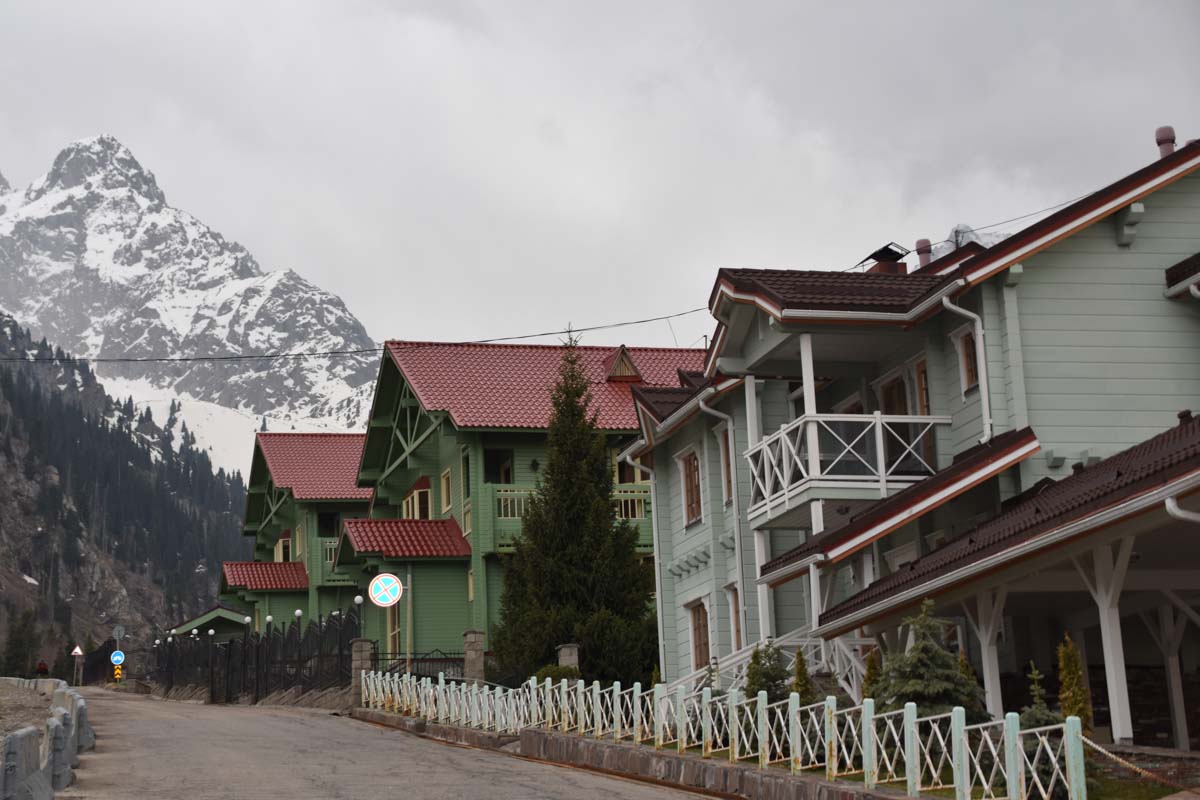 Shymbulak Ski Resort in the Mountains above Almaty

Shymbulak (Chimbalak) is a ski resort in the mountains above Almaty. It is very easy to get there by bus from the center of the city stopping at the bottom of the Shymbulak cable car.

How to get there: take bus 12 from Dostyk Avenue (opposite Hotel Kazakhstan), then a Cable car from Medeu to Shymbulak. 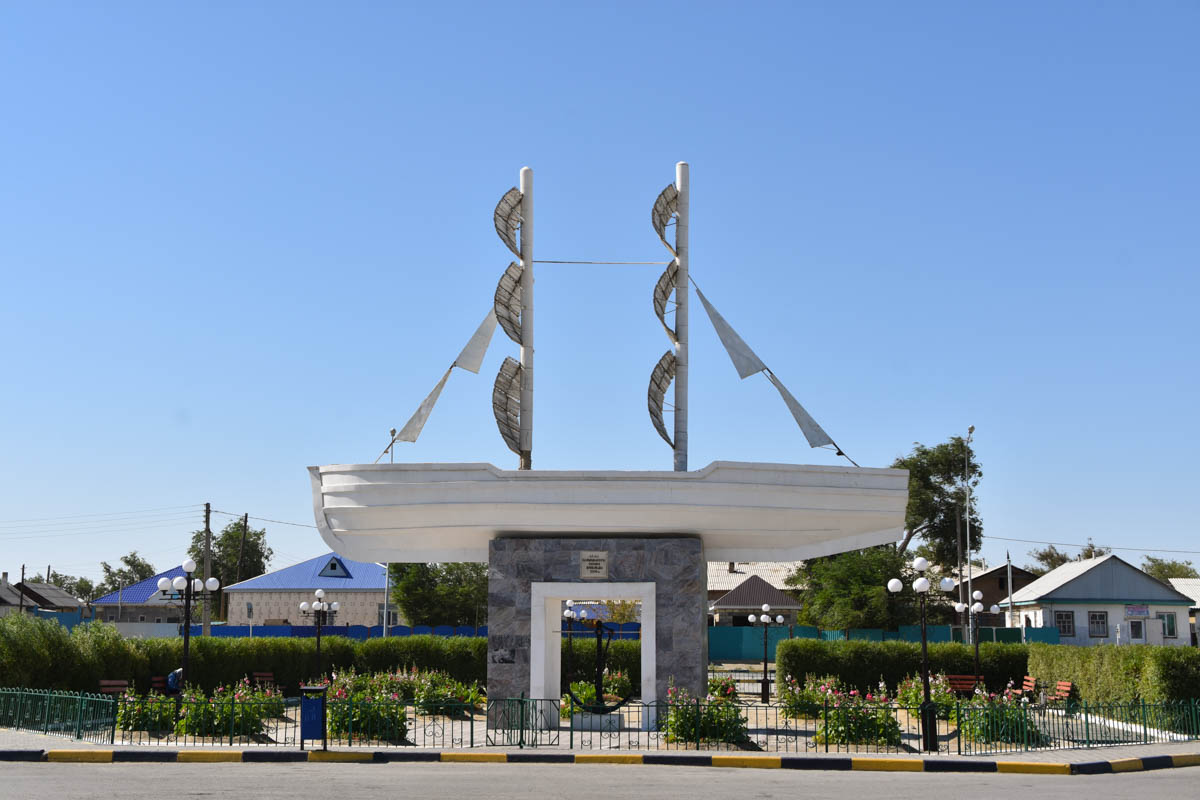 Once a thriving fishing port, the small town of Aralsk has seen better days. You will see more camels than ships here now as the Aral Sea has moved some 40km away as a result of Soviet damming.

Aralsk is one of the more interesting places to visit in Kazakhstan for those who are interested in dark tourism. There isn’t a great deal to see, and the accommodation options are frankly terrible, but if you want real “off the beaten path” travel, then give it a go! 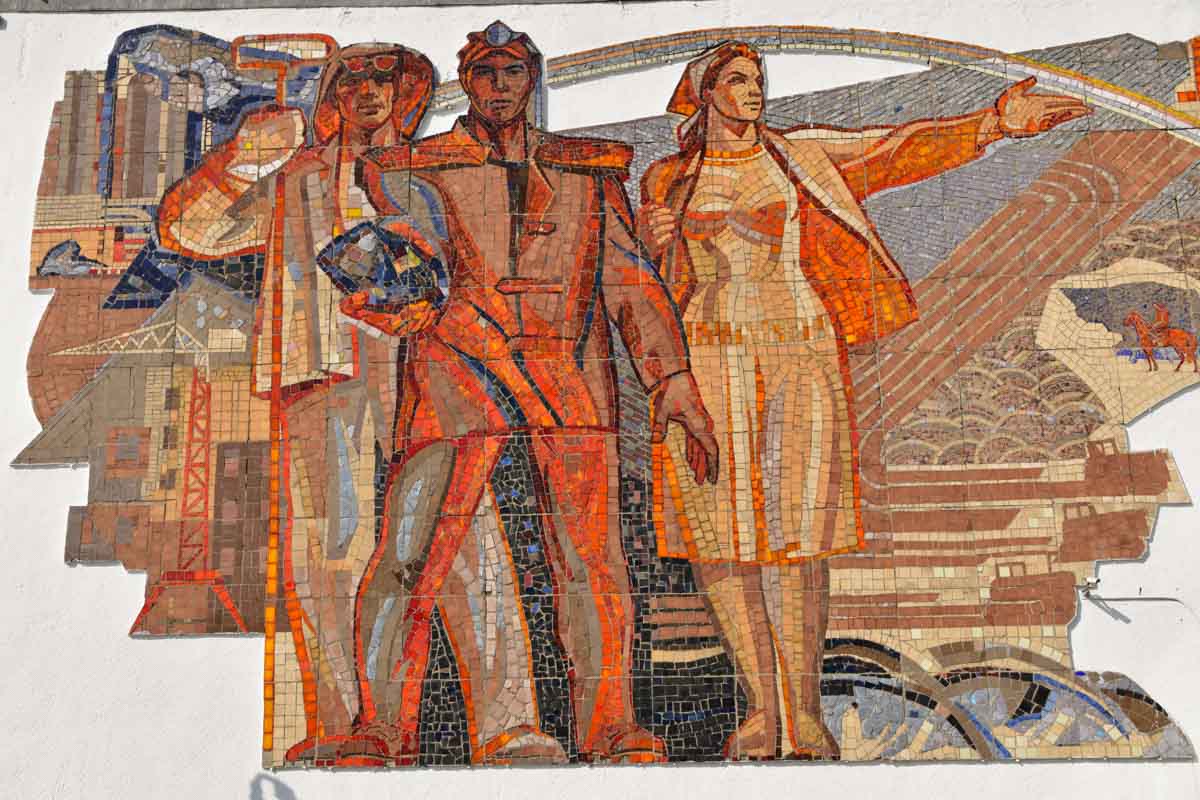 Karaganda is a small city in the north of Kazakhstan a few hundred kilometers south of the capital Nur-Sultan. The city is home to some interesting architecture, art, and home of the Karlag gulag complex.

Kazakhstan’s shiny new capital Nur-Sultan (formerly Astana) is the business and financial center. Due to its northern location, Nur Sultan is the second coldest capital in the world (after Ulaanbaatar). 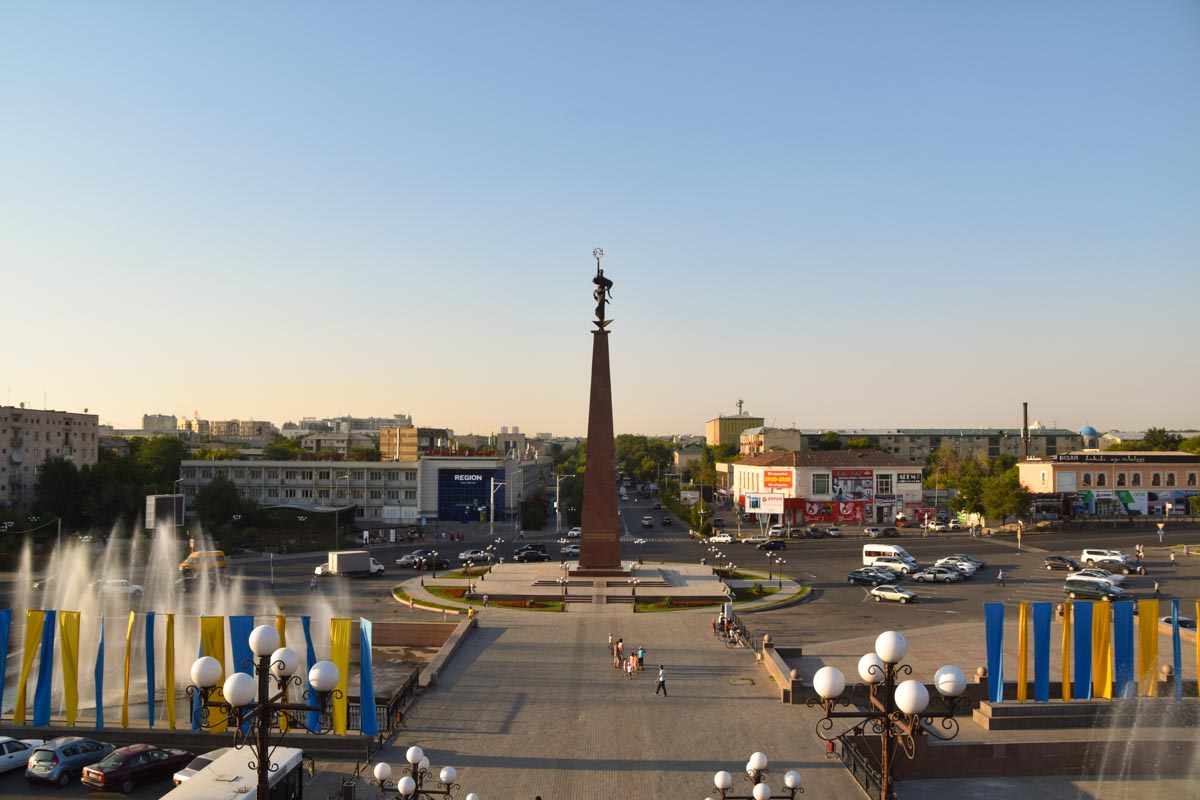 Laidback Shymkent is a small city close to the border with Uzbekistan.

Turkistan is home to some of Kazakhstan’s most impressive medieval Islamic architecture from the Timurid empire, making it one of the top places to visit in Kazakhstan.

Picturesque Zharkent is a small village on the border with China. Here you will find wooden cottages reminiscent of Siberia sitting in the shadows of the nearby Tian Shan Mountains.

Kazakhstan is a very large country and the distances between cities can be huge. The country benefits from a comprehensive rail network. 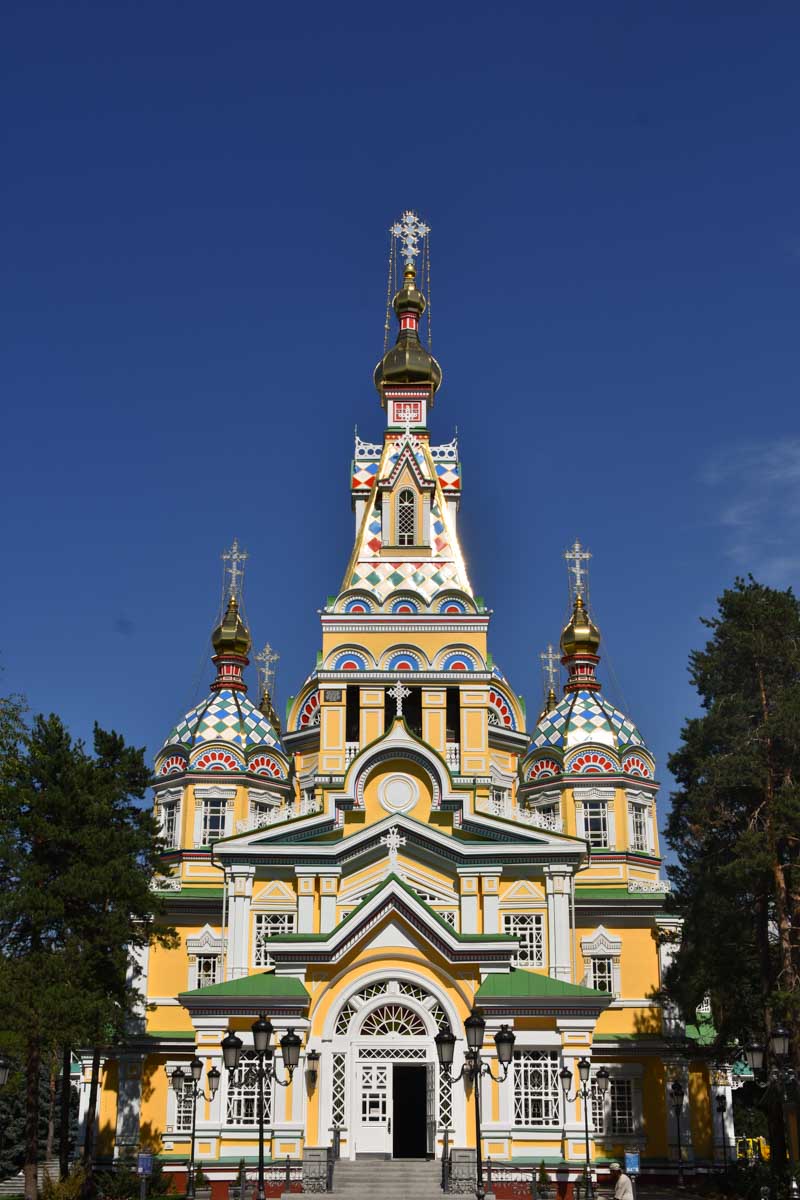 Prices are generally cheap by western standards but tickets can sell out so it’s always best to book a few days in advance. You can buy tickets at the station or online at the official Kazakh Railways website.

Buses are another great way to travel and are slightly cheaper than trains. As the roads are not all paved, the journeys can take much longer.

It’s also possible to take taxis long distances and you will find people at transport hubs offering rides to other cities.

You will find taxis waiting at train stations and long-distance bus stations such as Sayram in Almaty. To hail a cab on the street, simply hold out your hand toward the traffic. Any car can be a potential taxi and you must agree on a price before entering.

You can also use the Yandex Taxi app (similar to Uber) if you speak Russian or Kazakh.

Getting to and from Kazakhstan

To get to and from Kazakhstan and neighboring countries, here are three of the most common ways:

Money and Costs in Kazakhstan

Kazakhstan is an inexpensive country by world standards and ranks 334th out of 376 cities worldwide (which is 70% lower than the USA).* 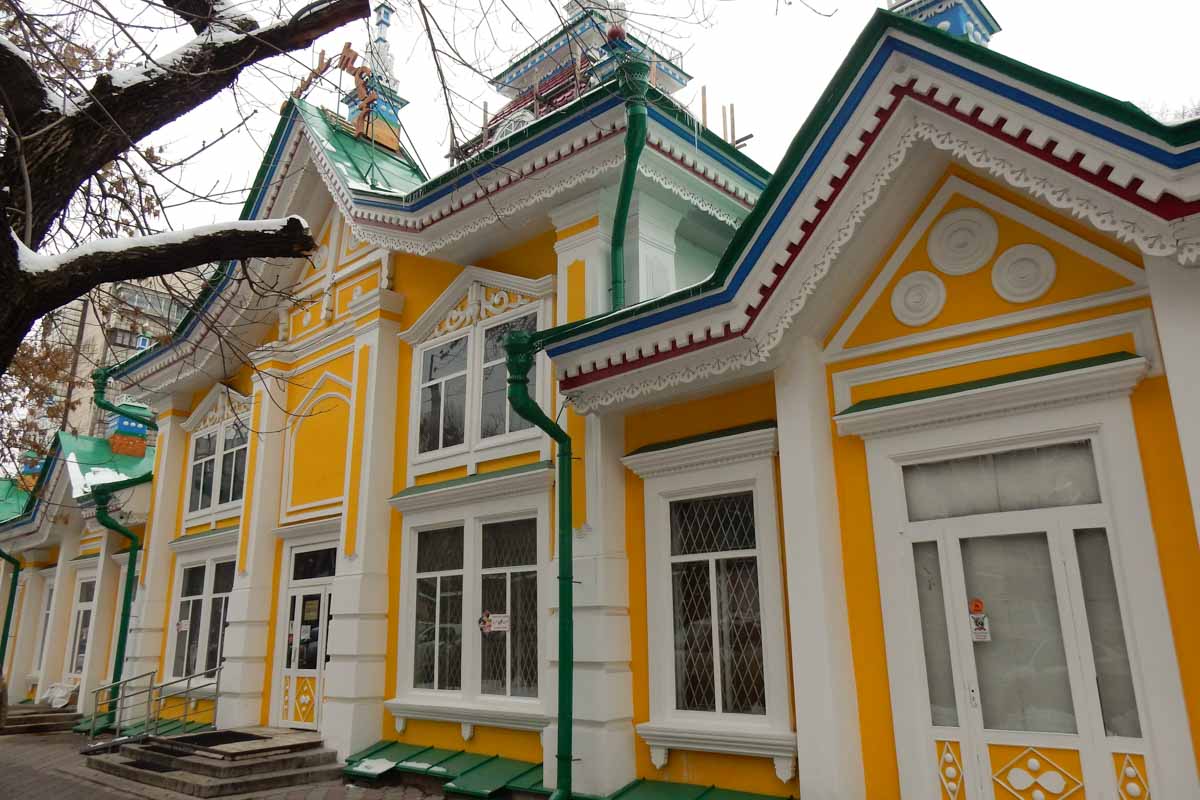 Accommodation and transport (if traveling between cities) are the two biggest costs associated with a trip to Kazakhstan, but with an abundance of cheap hotels, hostels and transport methods, it’s possible to travel the country on $30 to $50 per day.

Kazakhstan has plenty of hostels in the larger cities. In the smaller cities, it’s possible to get a hotel room for c5,000 tenge ($12.00). In Zharkent I had a whole suite for this price.

The old slow trains can cost up to 60% less than a ticket on the new fast trains and are perfectly comfortable for an overnight journey outside of the summer (no air-con).

Long-distance buses make a good alternative to the trains and ply many of the same routes.

Food and Drink in Kazakhstan 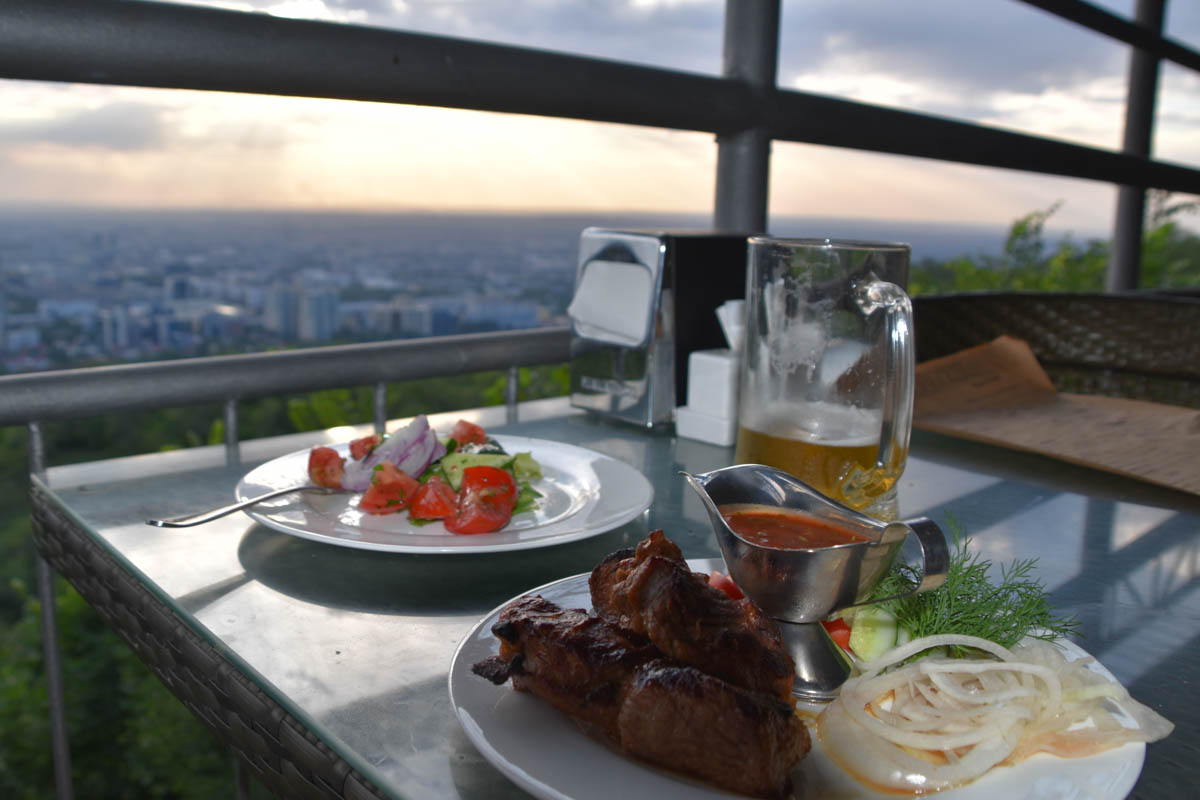 Lamb Shashlik at the Kok Tobe Cafe in Almaty

Kazakh cuisine is strongly influenced by the country’s nomadic past. Kazakhstan’s national dishes are meat-heavy with horse, mutton, and lamb, but there are plenty of vegetarian options in the larger cities.

Dishes such as beshbarmak (boiled horsemeat or mutton) are very popular, but it is the ubiquitous shashlik (grilled chunks of meat served with dill and onions), that you will find almost everywhere.

Dining out in one of Almaty’s many street-side restaurants or cafes is the highlight of any trip to the country and the quality of the food is very high. In the larger cities, you can find cuisines from around the world including Chinese, French, Georgian, Italian, and Japanese to name a few.

Eating out in Kazakhstan is inexpensive by western standards and a good meal with drinks can cost less than $10. Head to one of the many bazaars such as Green Bazaar in Almaty or Ayna Bazaar in Shymkent for a real taste of Kazakh ingredients at their freshest and most colorful.

The Kazakhstan weather can differ greatly depending on where in this vast country you are. The interior is an arid land consisting of desert and steppe. 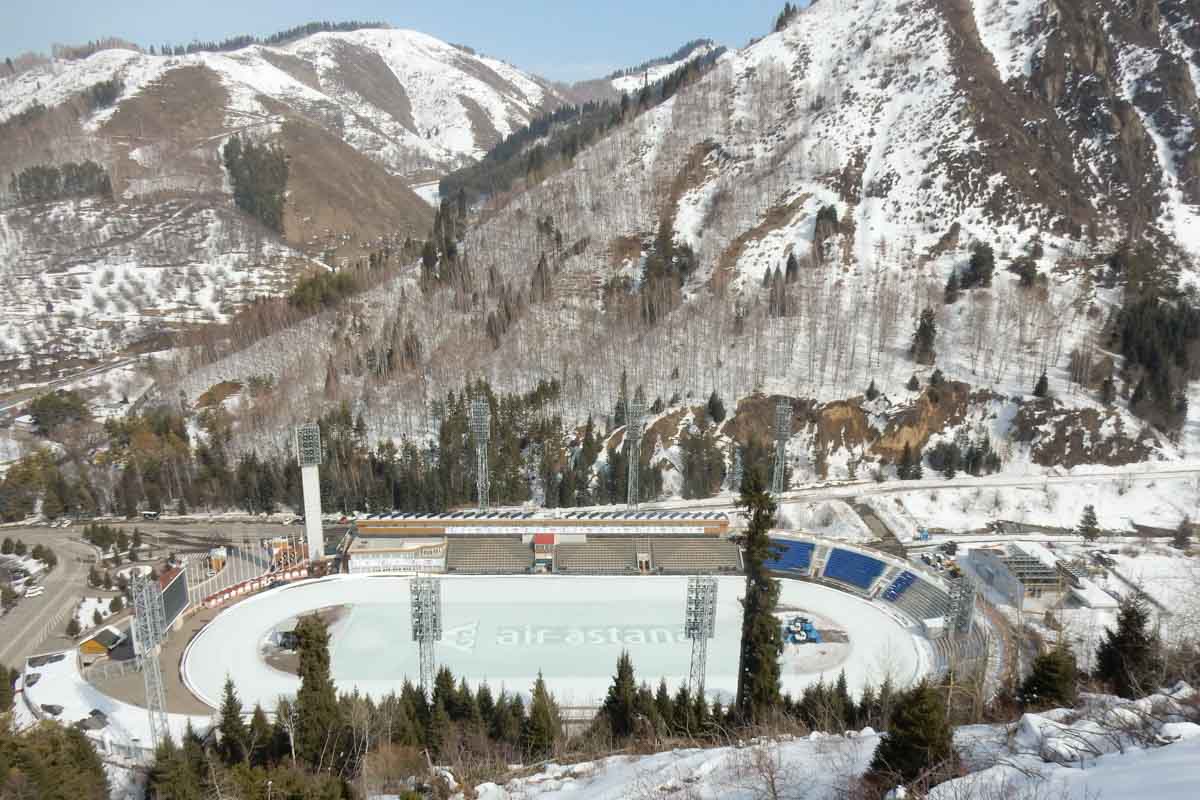 Due to the geographic location far from any seas (the Caspian and Aral are technically lakes), the country has hot summers and very cold winters.

Nur-Sultan sees milder summers due to its northern location, and Almaty has hot and sunny summers with the occasional thunderstorm.

Kazakhstan is a very safe country with very little crime reported against foreigners.

However, the harsh landscapes across the country mean that you should be well-prepared before setting off. Read more about Central Asia travel and, as always, ensure you have proper Travel Insurance when traveling.

Steve Rohan is a writer from Essex, England. In 2015 he moved to China to teach English where he lived for over six years. He has lived and taught in the cities of Harbin, Luoyang, Sanya, and spent a few months in Hong Kong, before returning to England in 2022. He has visited over 60 countries to date and usually opts for overland travel. Steve has traveled extensively across Europe, Central Asia, and East Asia, and is now living the digital nomad life on the road. 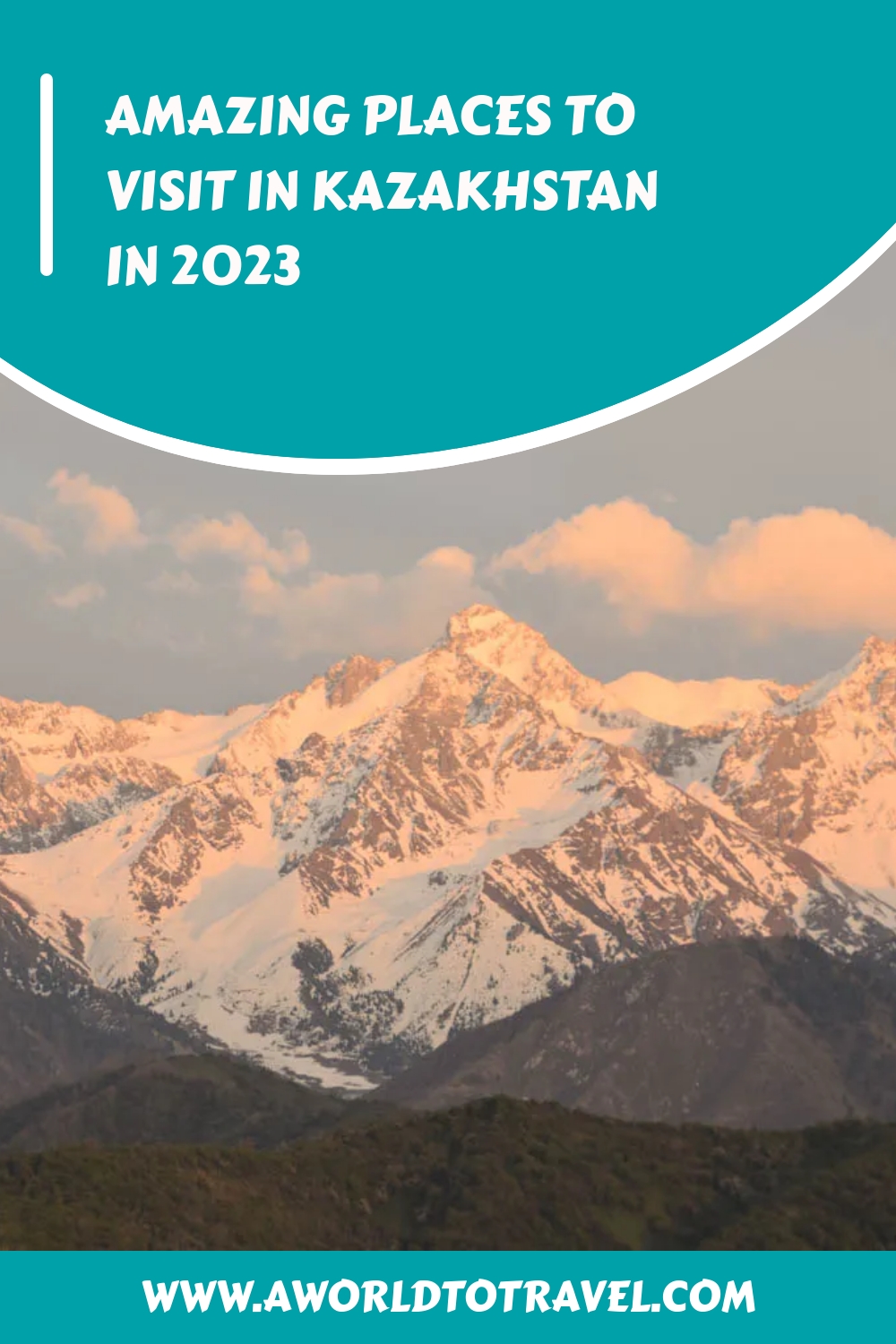