Unknown to many, this Balkan country is a treat for lovers of the great outdoors and recent European history. Uncover all the places to visit in Bosnia and Herzegovina you should add to your road trip itinerary.

In our travels around the world, all too often we come across places that are not quite what the travel guides had described. They either lack the charm, or have little uniqueness, or do not have any particular appeal.

Then there are those that are rarely found in guidebooks, even their existence shrouded in deep mystery wrapped up in perhaps a passing reference in an obscure journal.

Granted, with the advent of the digital age connecting the world in webs of ever-complex designs, these places have become fewer and farther apart.

One of the clearest examples of such a place, especially in the ever-popular continent of Europe, happens to be the country of Bosnia and Herzegovina. The country has had a rich cultural history that has begged to be explored, but its tumultuous past had ensured its continued seclusion in the world long after the lifting of the iron curtain. 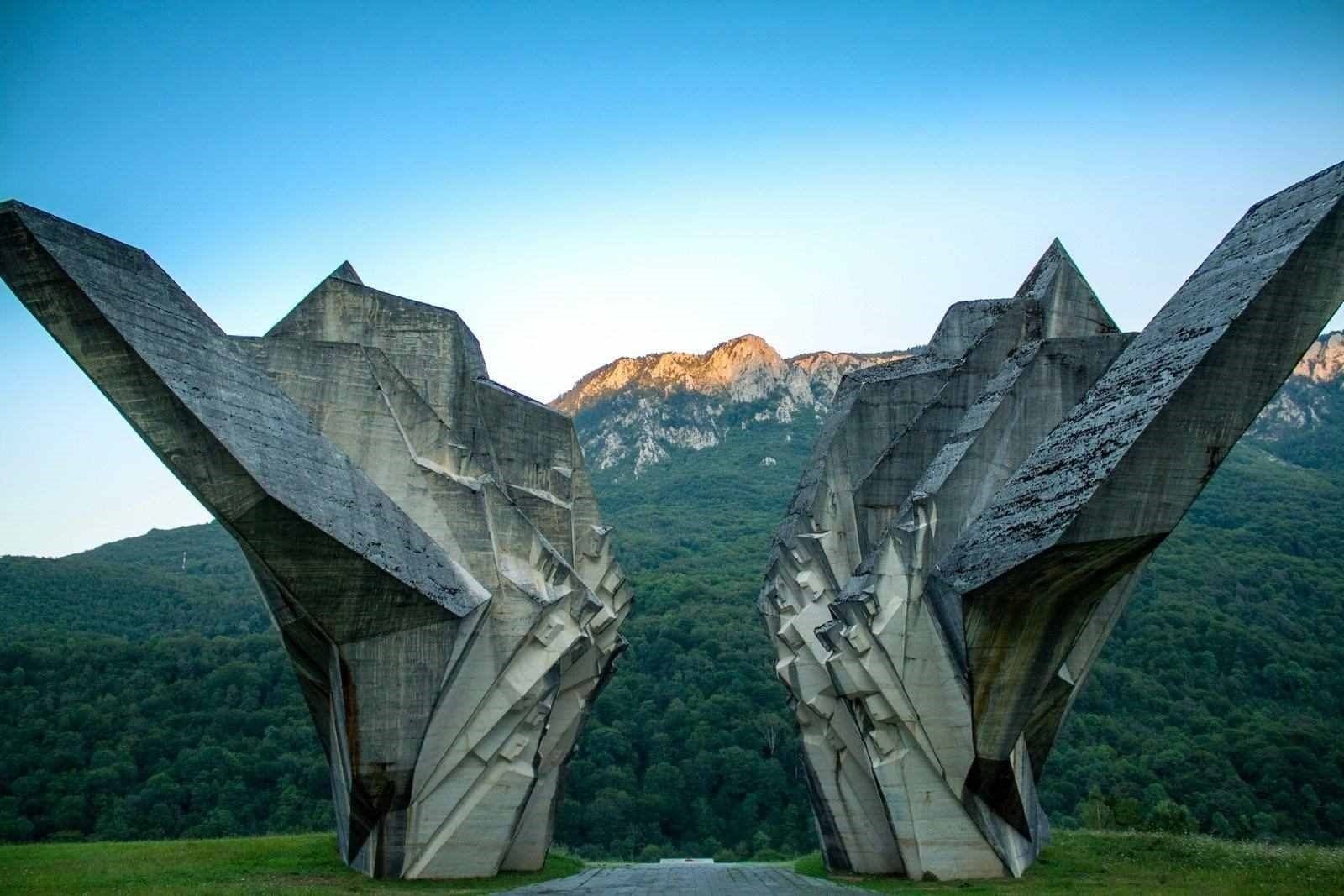 Our family has always tried to visit the more remote places on the planet. So given our strong penchant for exploring the unexplored, it was quite natural that such a place would pique our intense interest. 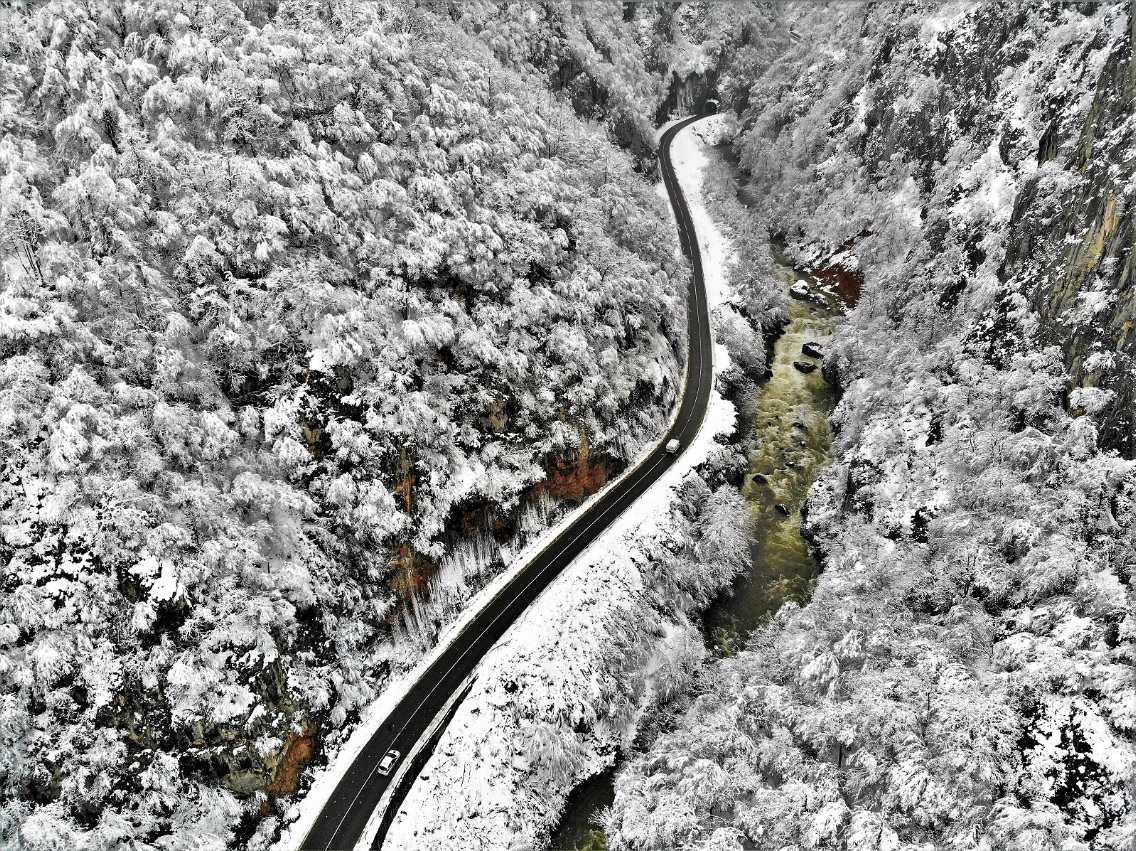 Before we entered the country, we had spent the better part of our journey in Croatia. This might be a great option for most since you have many more choices of airlines and affordable tickets by getting into Zagreb. Renting a car in Croatia will also give you the flexibility you need in a multination journey of this kind.

Once we were in Bosnia and Herzegovina, our journey began from the capital Sarajevo, from where we drove downwards towards the border with Croatia.

5 Unmissable Stops on a Bosnia and Herzegovina Road Trip Itinerary 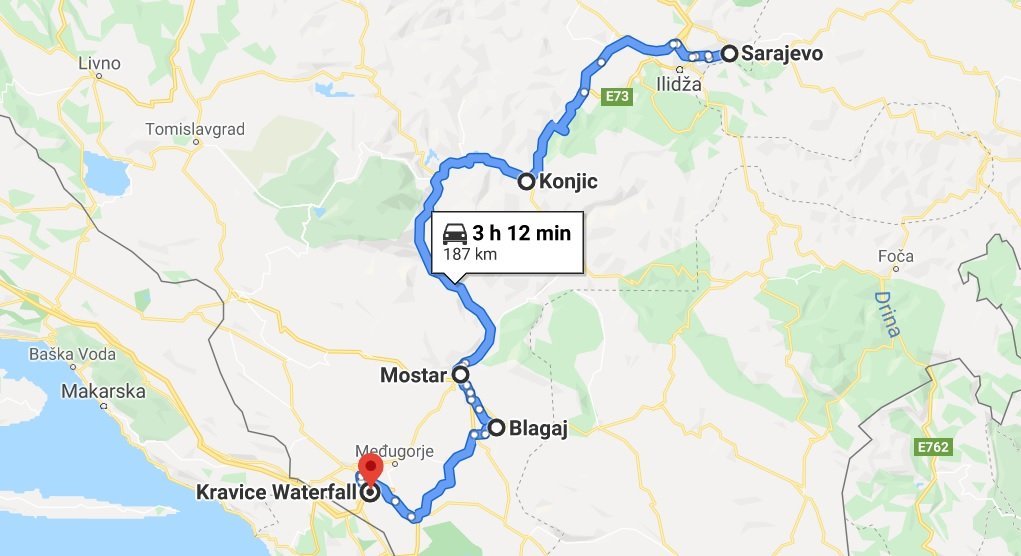 Sarajevo: A Rich and Twisted History 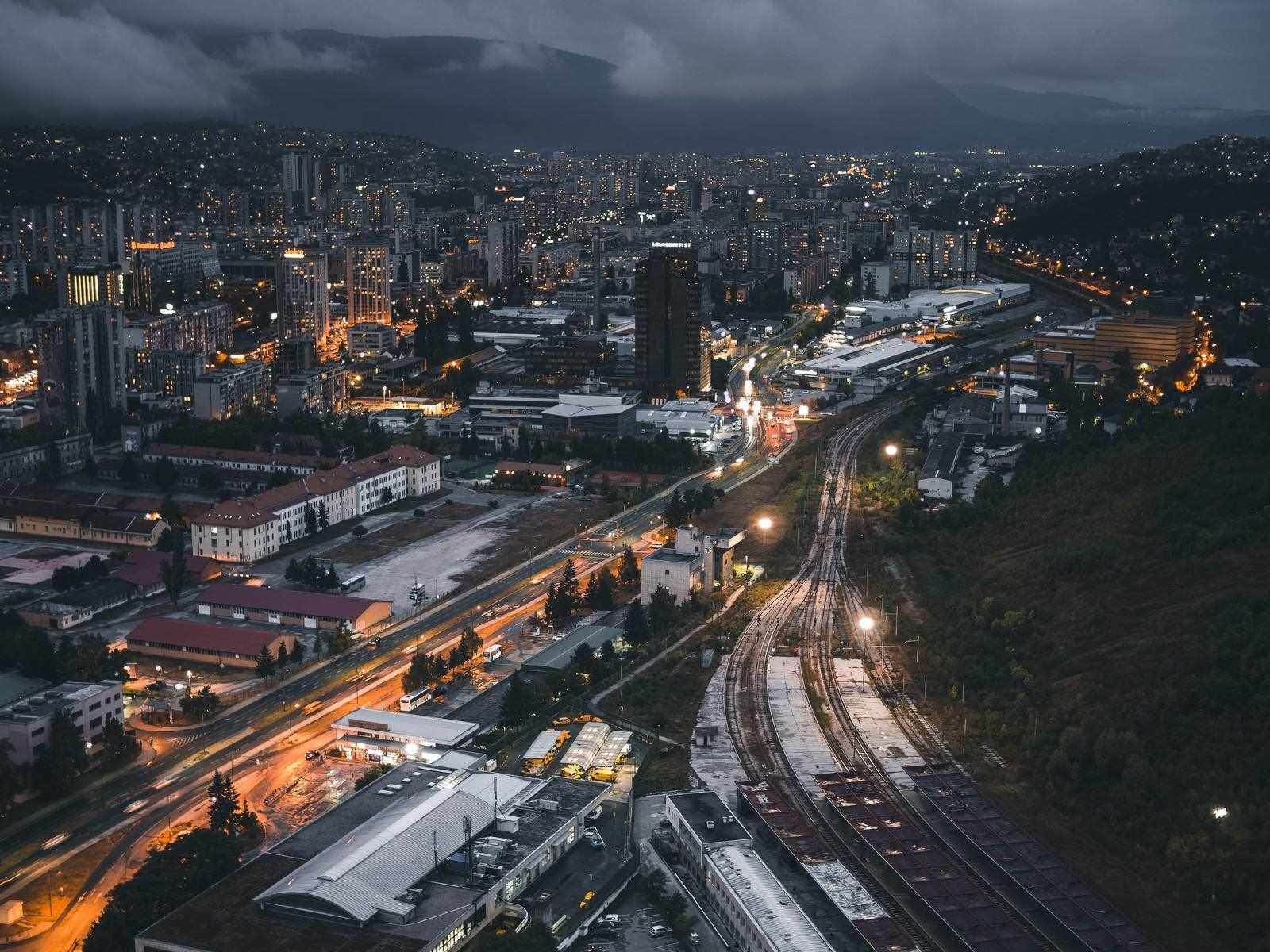 Sarajevo, although exceptionally rich from a cultural standpoint, has gone through recurrent conflicts and wars, the most recent being the extreme civil unrest of the 1990s. An unimaginable amount of ethnic strife became rampant at the time, but the city has since opened up to all three faiths – Islam, Christianity, and Judaism – and coexists peacefully ever since.

The remnants of those dark times are scattered throughout the city. Don’t be surprised to find bullet holes, dilapidated buildings, and portions of roads and walls missing from explosions that rocked the city in the not-too-distant past. But that’s also what brings uniqueness to an otherwise bleak and morose atmosphere hanging over the city.

If you’re a history buff, a cursory glance at the old Ottoman Latin Bridge will ring a bell. The assassination of Archduke Franz Ferdinand of Austria in 1914 that ignited the outbreak of the First World War took place right here, visible now as a prominent plaque to memorialize that occasion.

You’ll also find 500 years of history built inside the Gazi Husrev-beg’s Mosque located in the old town. Architectural marvels such as these, carved and inscribed in flowing Arabic, were partially destroyed during the Bosnian war and had to be rebuilt during later years. Nowadays, the mosque serves to summon the Muslim community to prayer and serve as their place of congregation.

Other must-see sites include the Kovači Cemetery that’s a reminder of the bloody war, the Tunnel Museum used at the time to bring in essential supplies during a 4-year long siege, and the Jewish Museum that catalogs the arrival of the Jews in the country during the 15th century to escape persecution in their own places of birth.

Konjic: Signs of the Cold War 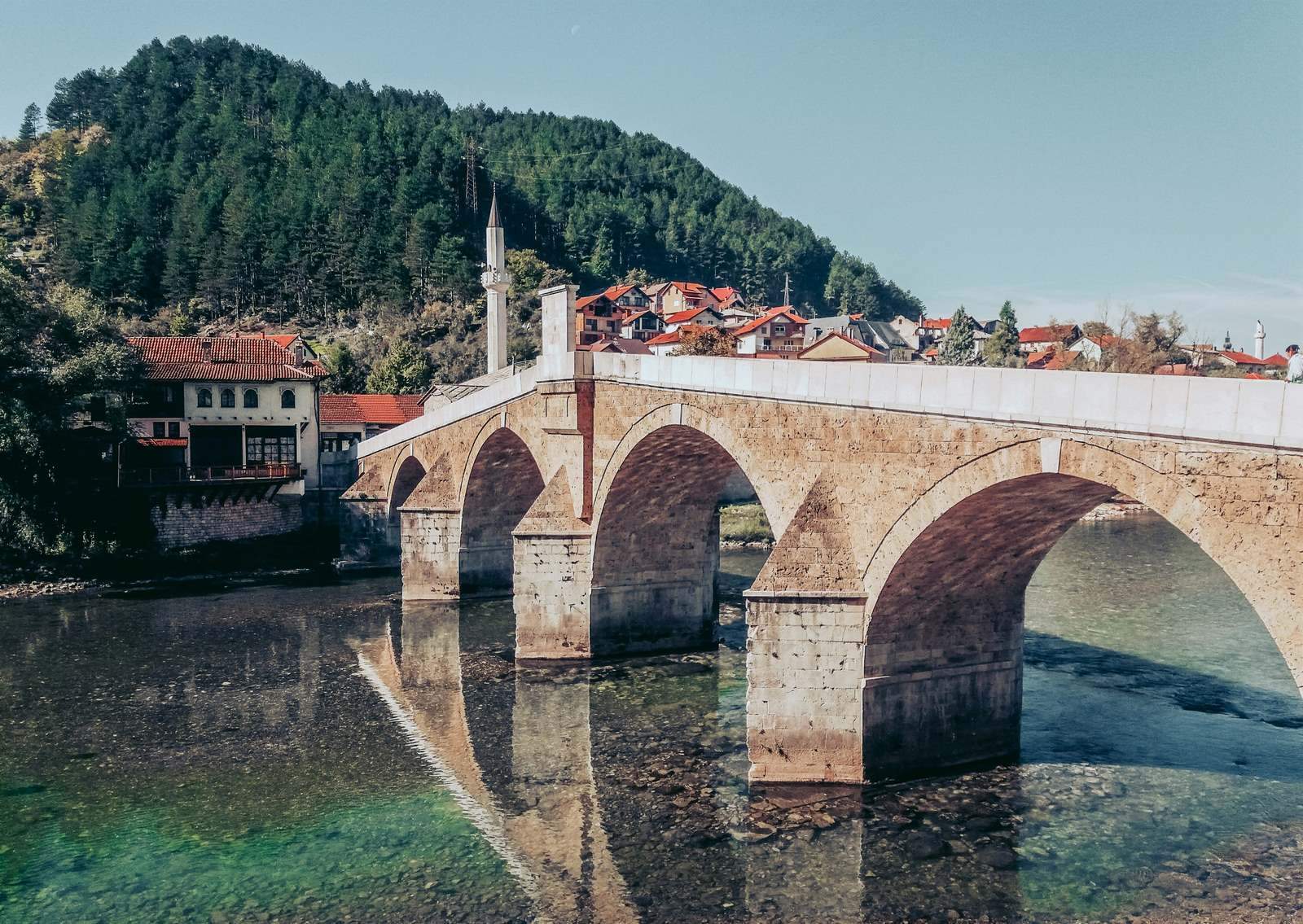 Driving south about an hour from Sarajevo there is a slice of history we wanted to pass by. The mountainous town of Konjic is scenic, being situated in a heavily wooded area of the country.

Two main attractions in this town that adds a flavor of history are the old bridge and Tito’s nuclear bunker. When you go around the different rooms inside the bunker make sure you pay special attention to the ones made especially for Tito, remembering that this was at the height of the Cold War. As for the bridge, it was built by the Ottomans, destroyed in the war, but subsequently fully restored and functional.

Mostar: The Scars of a Star 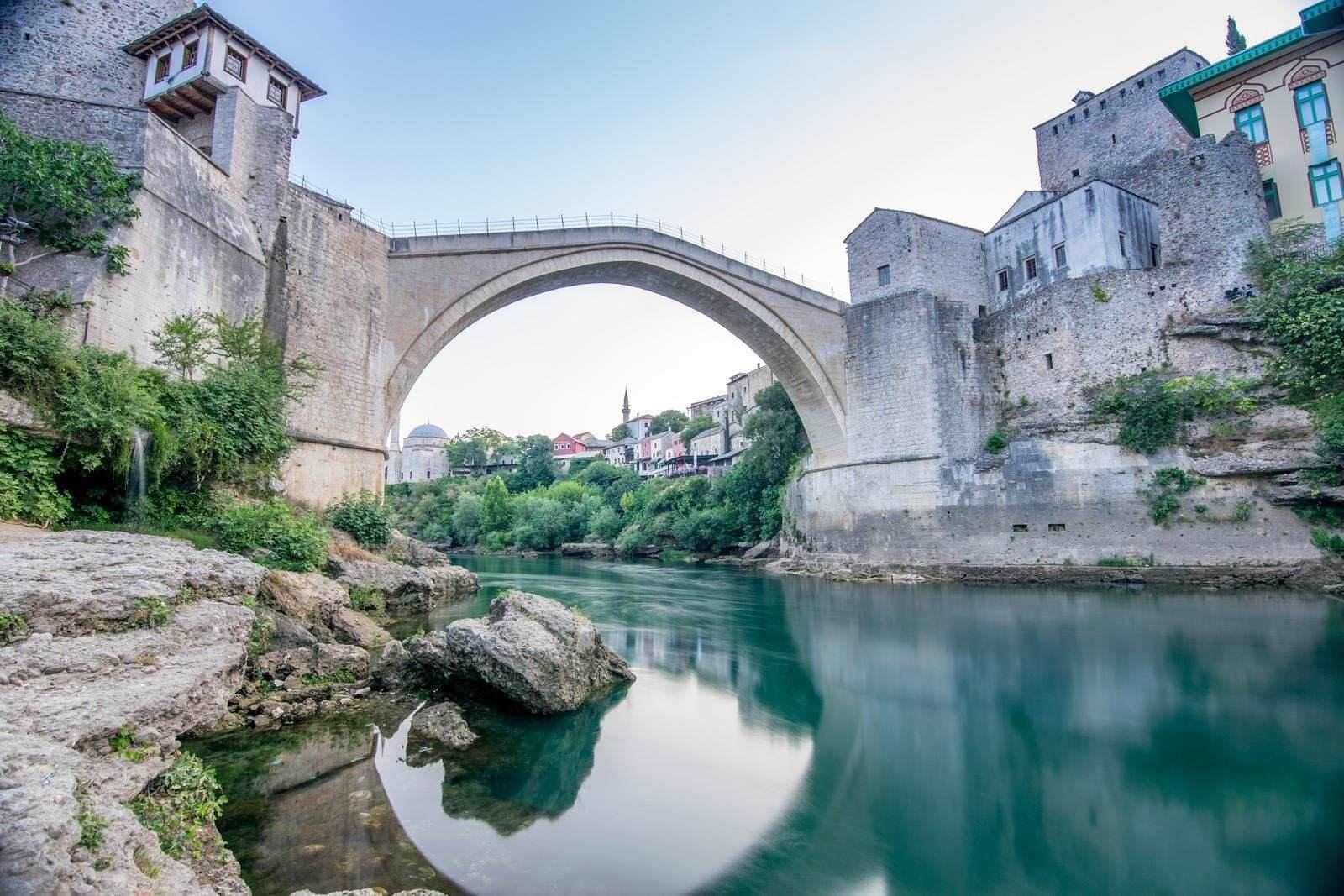 The next stop in our journey was the star of our entire Bosnia and Herzegovina trip, a place we had wanted to visit for a very long time: Mostar. The scars of the bloody unrest in the region that ultimately gave birth to the country of Bosnia and Herzegovina is probably nowhere more evident than in this quaint city which completely belies those days.

The town appears to be from another time period: the cobblestone streets and architecture show signs of Moorish influence; the Turkish houses lining up the streets speaks of the great diversity of the city; but most of all, the iconic medieval bridge seems to now signify a symbol of resilience and pacifism.

While still a part of Yugoslavia, Stari Most, or literally the Old Bridge, was famously and completely destroyed during the times of ethnic cleansing and had to be rebuilt brick by brick. The intense emerald waters of the Neretva River runs underneath as a silent witness to these struggles, adding a certain layer of fairytale charm to the character of the place. The river is known to have one of the coldest waters in the world. 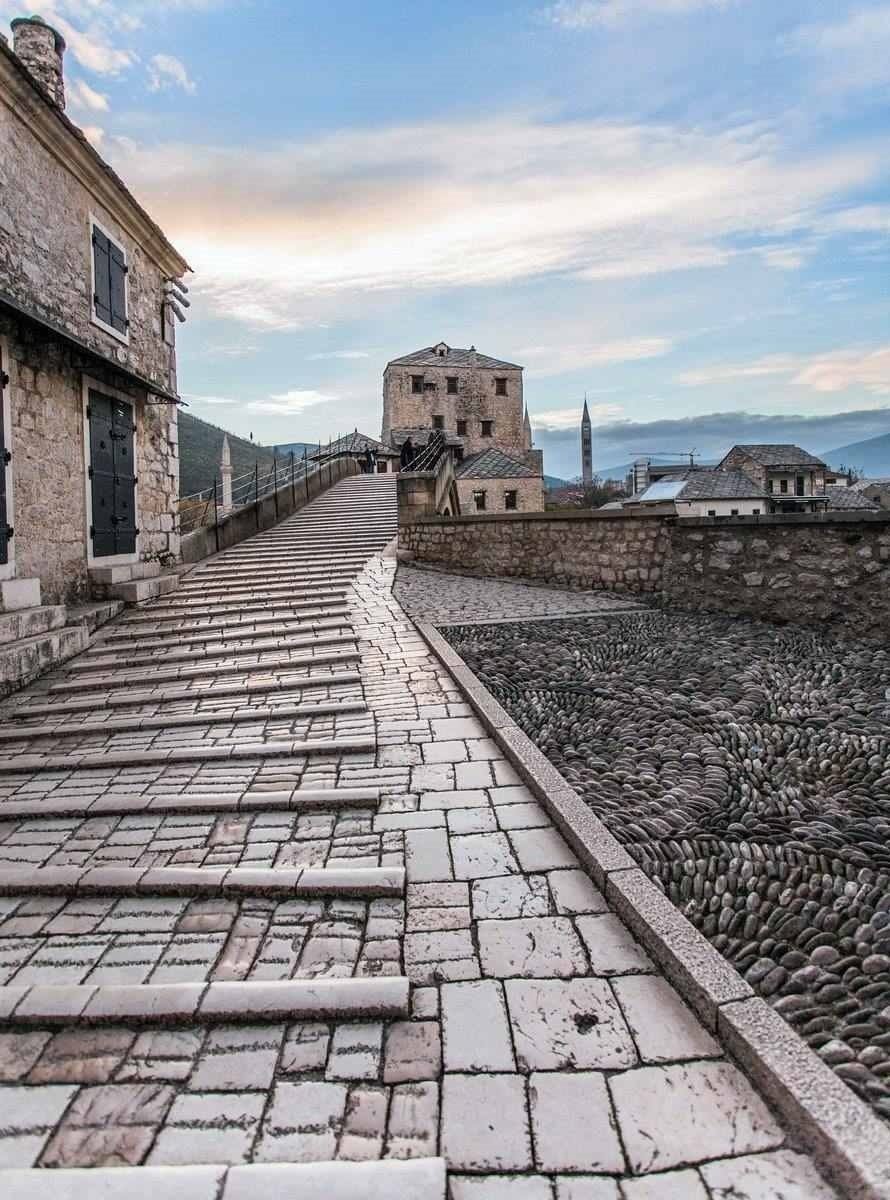 The city draws in a fair number of tourists from all over the world, but this is nowhere close to what you’d find in most other European cities, and that in itself adds to the city’s charisma. The place is so alluring that you can spend the entire day walking along the riverbank and stopping to check out some of the merchandise that is being sold from the makeshift markets around the city. You’re likely to find all sorts of surprising finds, and of course, it’s a great place to stock up on any interesting souvenirs as well. And with the ever-present cats and kittens roaming the city’s streets, the place seems rather reminiscent of a town in Morocco.

This might not be too surprising, however, since the architecture, religion, and lifestyle of this region is quite akin to those of Northern Africa. Getting just a little bit deeper into the city would bring you face to face with some of the ugliest chapters of human history, evident from bombed buildings and hollowed out city blocks. In the most recent war alone, over a hundred thousand people had perished and many millions were displaced.

Time, however, is the greatest healer, and now, although the competing factions remain divided as ever, the war is not being waged with bullets but instead with words and ideas.

If you’re in this country even for a few days, you should plan on spending at least one night in Mostar: the city is at once delightful and eerie, but either way, seems to grow on you. 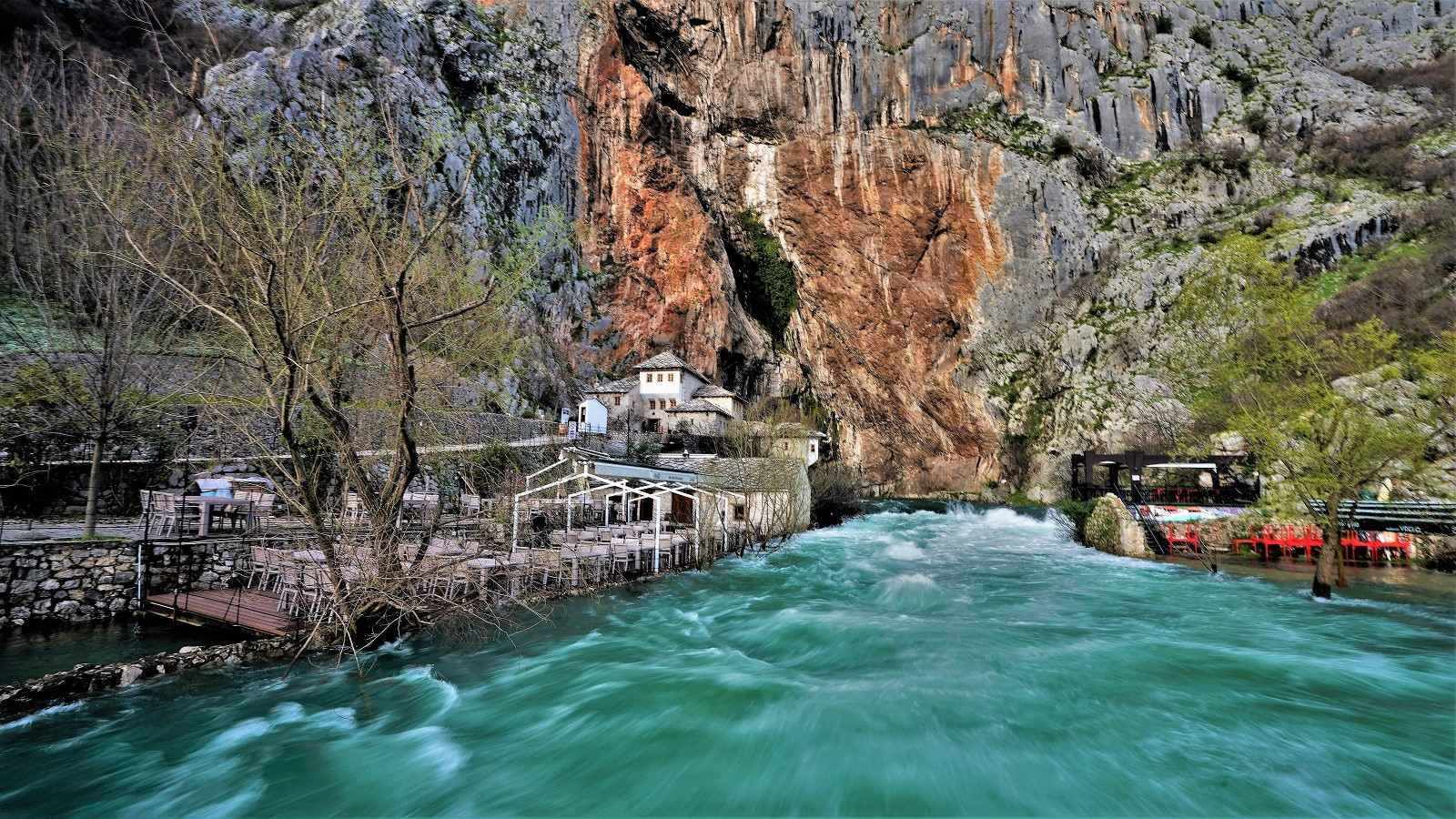 A mere 30-minute drive will take you to Blagaj, another utterly gorgeous village that is still under the radar of all but the most resourceful tourists.

There’s an exceptionally scenic old Sufi or Dervish monastery here, situated adjacent to the steep mountainside that contains a mausoleum and an old Turkish bath. The Buna River, flowing to the Adriatic Sea, often swells up and inundates much of the low-lying walkways and restaurants. 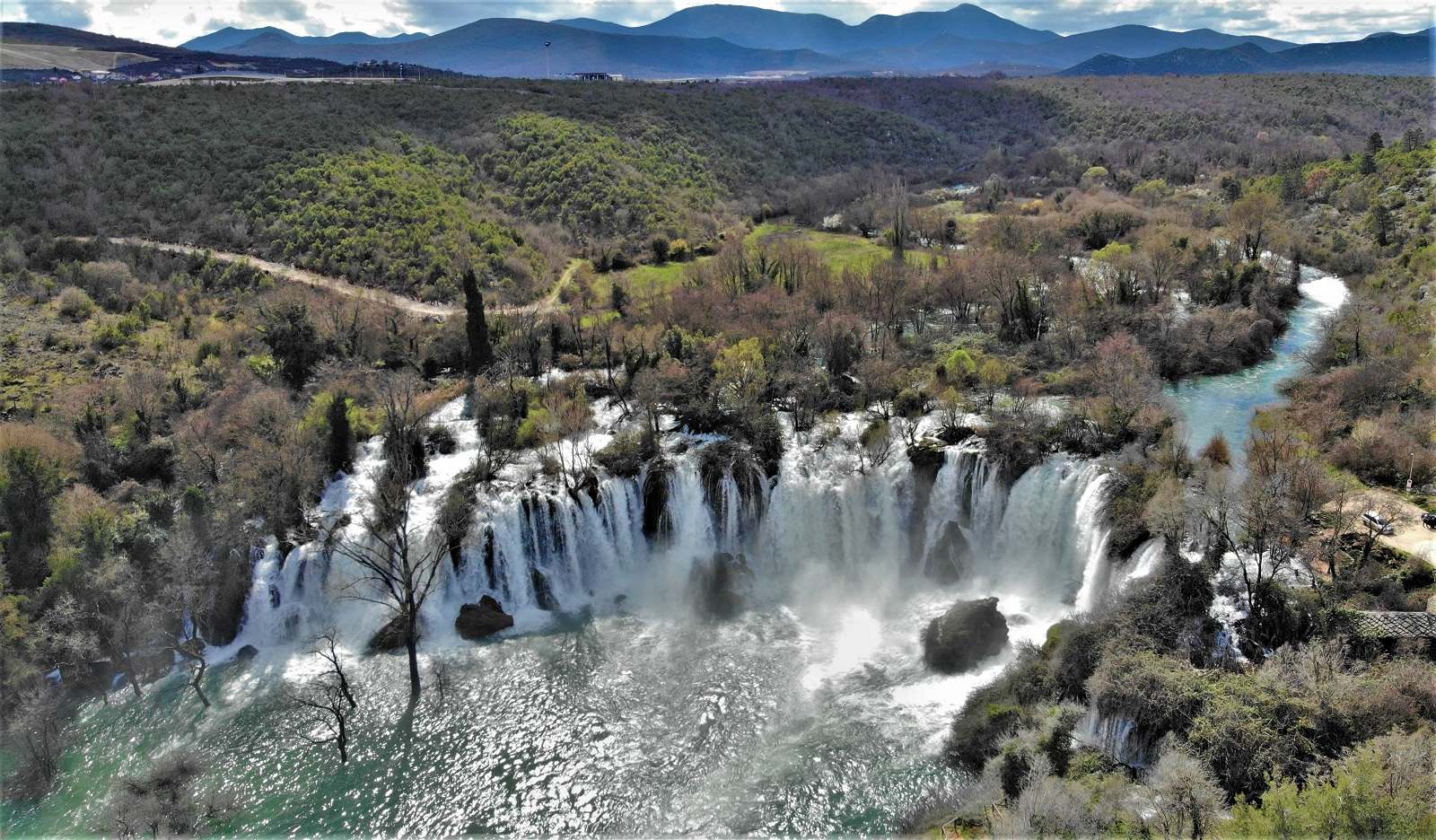 If you’re after an outdoor adventure, look no further than the Kravice Falls, which will offer you some great hiking trails and kayaking opportunities in the river rapids.

This rather attractive waterfall is about an hour’s drive from Mostar, yet when we reached the thundering falls, absent were the hordes of tourists so common nowadays in most places of interest. Instead, as we spent a couple of hours hiking around the falls, we encountered no more than half a dozen folks.

If you hold isolation and tranquility dear to your heart, this is a great natural spot to rediscover your inner connection with Mother Nature. And yet, in the jostle of selfie sticks, that’s something you’re unlikely to ever experience when you’re near the Niagara Falls.

Read more: Everything You Should Not Miss When Visiting The Balkan Countries

Our Take: When to go, Why go 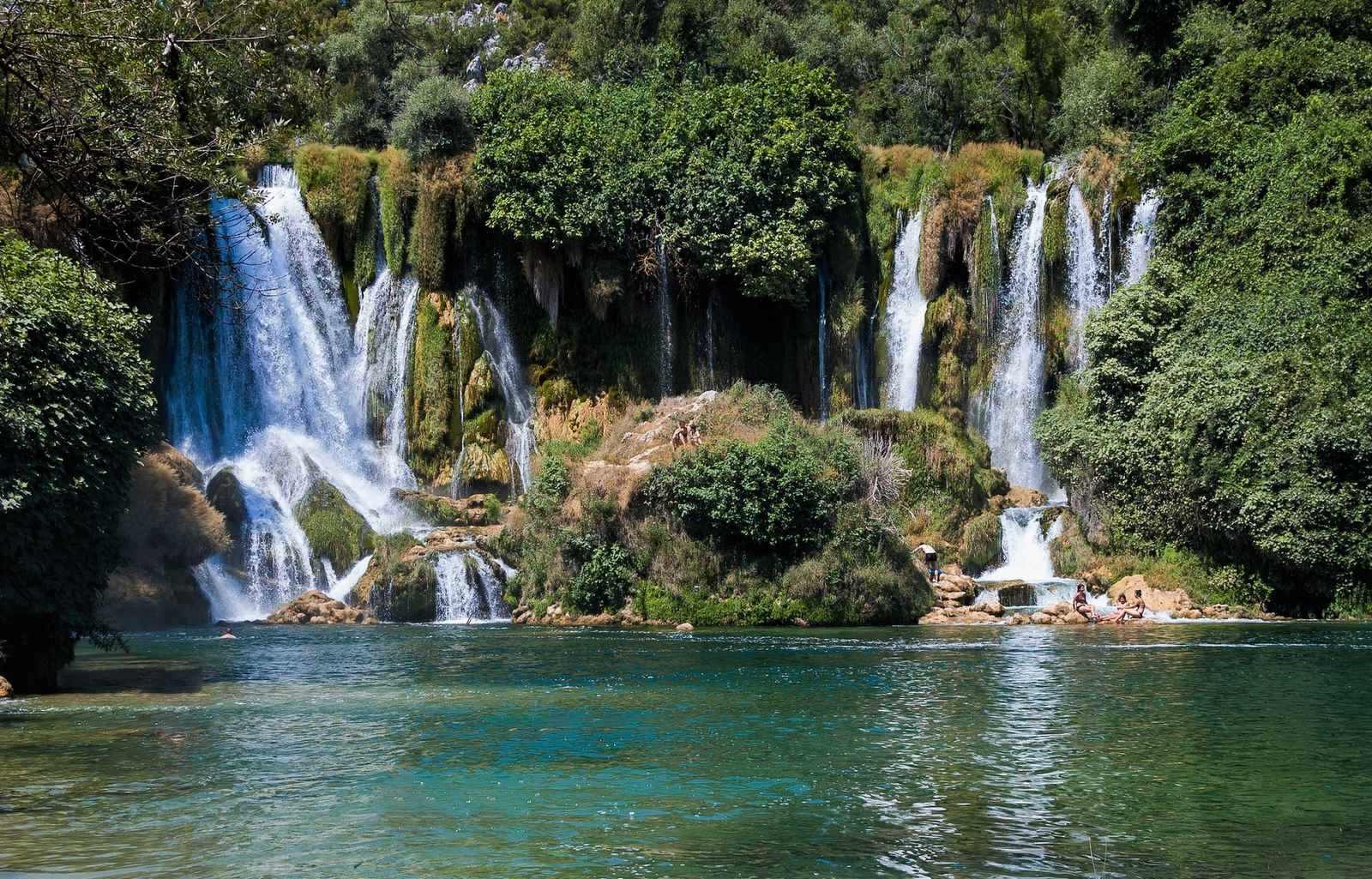 A word about timing will be helpful. Like most European countries, Bosnia and Herzegovina, too, hibernates during the winter months. The peak summer months, on the other hand, are blazing hot, and so might not be the best time to visit either. If you don’t mind a light occasional snowfall, our recommendation would be to visit the country during the shoulder months of March—April, or September—October.

Europe is among the smallest continents on our planet. Yet, it has great variation in the number of countries, cultures, languages, and ideas it represents. No, you’re quite unlikely to find the chutzpah of the Parisian nightclubs or the glamour of the Venetian canals on your serene trip to a place like Mostar. But if a little bit of peace and serenity is what you’re after, then nothing beats the undiscovered charms of Bosnia and Herzegovina.

Keep reading: Here’s why you should include Albania on your upcoming Balkan trip

GeoBeetles is a family of five travel influencers who aim to explore every country in the world, seeking out rare flora and fauna, vanishing tribes, and remote natural wonders. 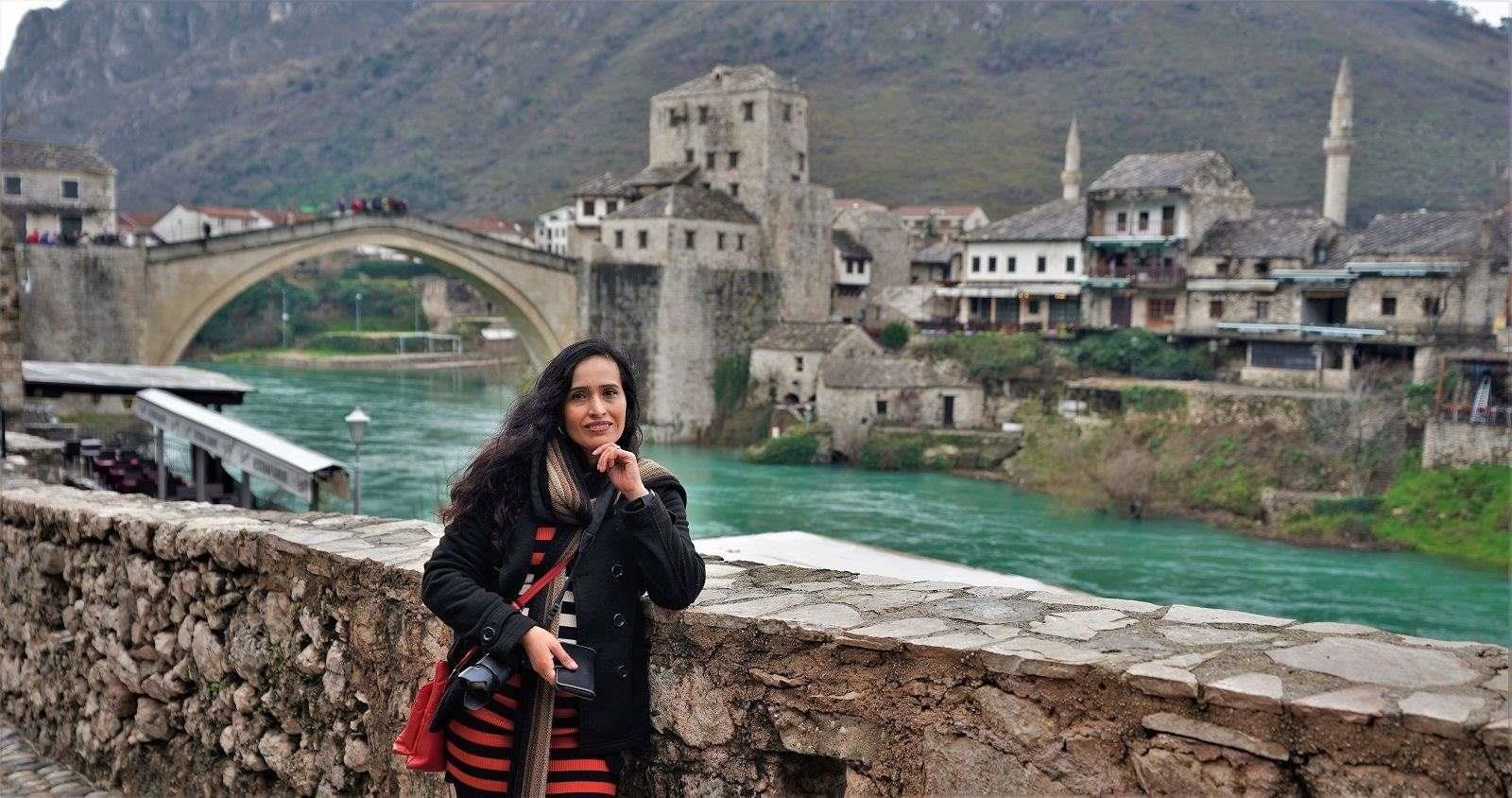 Working in full-time jobs – Dr. Shameema Sarker as a scientist, and Dr. Niladri Sarker as a professor – they explore the world with their three children as they balance work and family obligations while encouraging others to travel, to broaden their horizons, and to become responsible planetary citizens.

They are experts at weaving compelling family stories in a vibrant yet natural manner, and their goal is to promote brands and products by providing exposure to tens of thousands of social media followers. Their travel stories can be found at http://www.GeoBeetles.com. 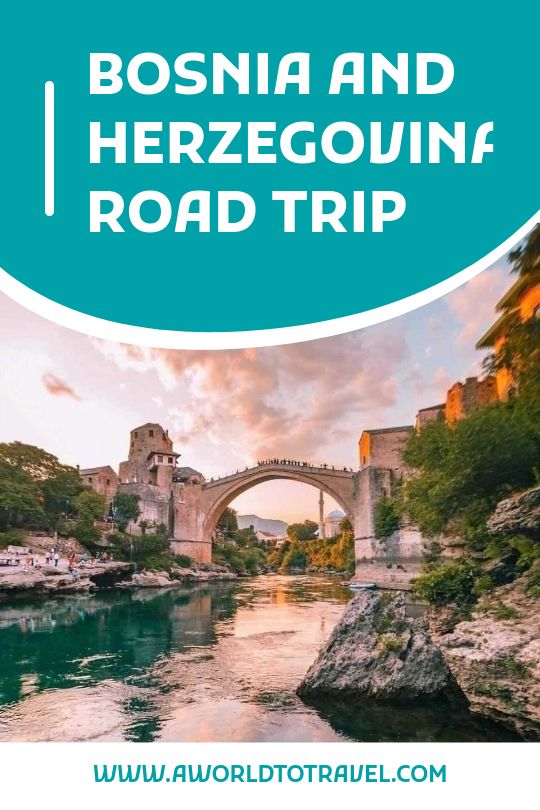