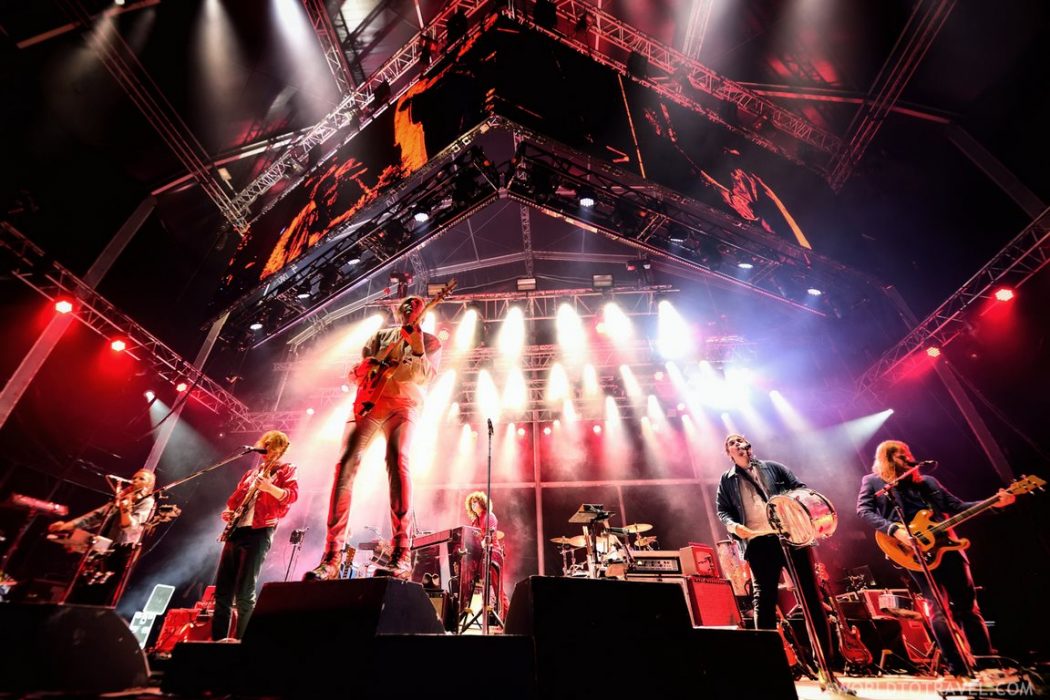 Over a hundred thousand people can’t be wrong.

Paredes de Coura Festival did it again, attracting even more music lovers than in previous editions with a line up full of both established bands and newcomers worth watching live. And it didn’t disappoint.

In a world ruled by consumerism and large cities, Paredes de Coura ten thousand inhabitants’ village is the hedonistic slow-paced oasis many festival-goers can’t wait to return to every August. It’s been eight years for us already, and dozens for others; which proudly exhibit a collection of past editions’ wristbands as jewelry.

The devoted love every attendee displays for this festival is something that can only be understood in situ. May it be its organic amphitheater, the Taboao river beach’s unique atmosphere under daylight, the care its promoters put every year to improve the facilities without compromising the comfort or the enclosure’s capacity, the same smiley faces year after year or the unique Portuguese charm; truth is neither them nor us can’t get enough of the Couraíso (Coura paradise).

Isn’t it quite sad that we have never experienced the pre-festival days at Paredes de Coura main street? Since the previous Saturday, and for four days (which makes a total of 8* days of music gigs) bands and DJs lighten up this town before the paid festival kicks off on Wednesday.

However, complaining would be unfair. This edition, we enter the festival grounds just to see the Portuguese band Linda Martini premiering the main stage after three previous performances in past editions.

The Australian ensemble King Gizzard and The Lizard Wizard and its psychedelic rock warmed up the mosh pit, a Paredes de Coura classic among the youngest as much as they did two years back.

Later on, past midnight and a half, the French DJ duo The Blaze showed us all why French electronic music is respected all over the world. As well as there’s no need to even show the DJ on stage, as half of the gig saw them hidden behind a couple of large screens. No one cared though, visuals are usually a sweet addition to this genre. 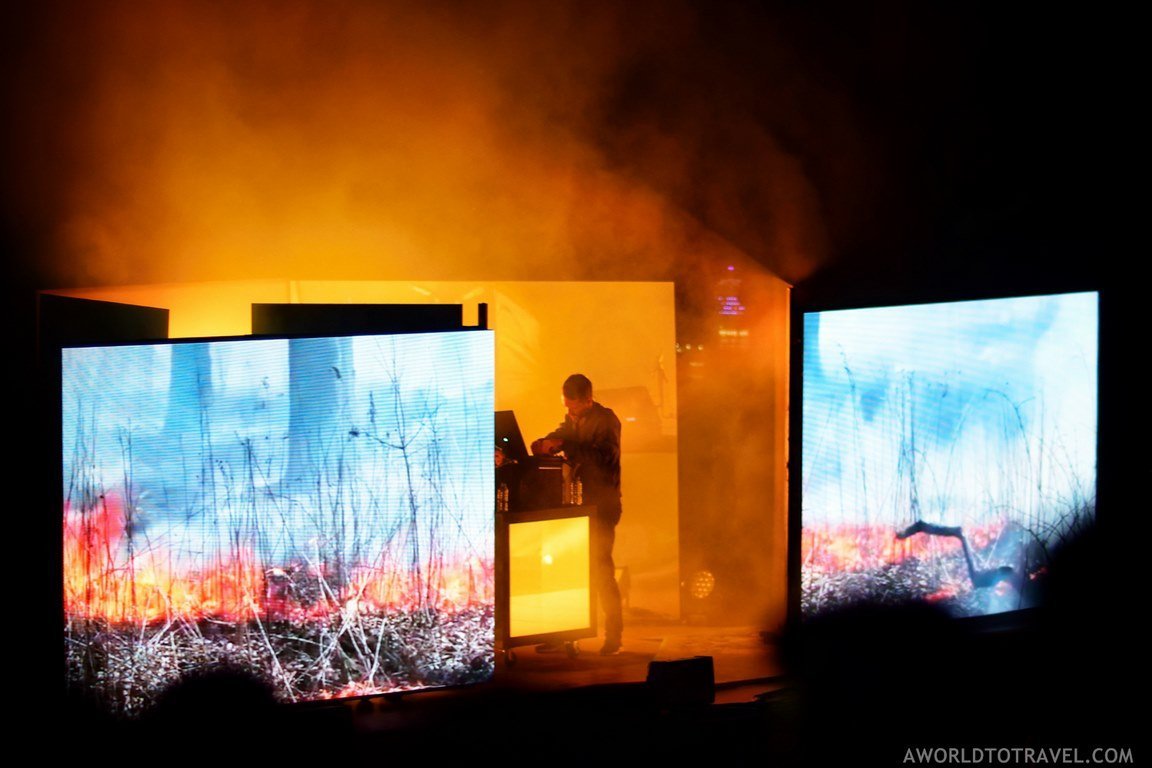 Conan Osiris brought everyone closer in the Vodafone FM stage, aka ‘after hours’ with its colorful, agitated tunes. Joke or not – we are still deciding – it was quite a show.

Ultimately, it was the turn of resident DJ Nuno Lopes. After watching him close the festival the latest few years, we missed the familiar Tame Impala vibes, confetti and overall long fun session he had made us get used to. How little we knew then what the closing of this edition had reserved for us.

Shame played before sunset, which was one of the best gigs this year as everyone we talked to raved about this London quintet. Too bad we missed them, as we entered the festival grounds just on time to briefly check the US dream pop band Japanese Breakfast and The Legendary Tigerman, a beloved Portuguese artist which, unlike the last time he played at Paredes alone, was accompanied by drums, saxophone, and bass.

Surma was a huge surprise. One of the kinds that make Paredes de Coura such a great festival, where uncovering awesomeness is the rule. The young Débora Umbelino (Portugal, 22) mastered many music genres such as electronic and pop with Björk-esque vocals inspiring everyone in the Vodafone FM stage. Remarkable. 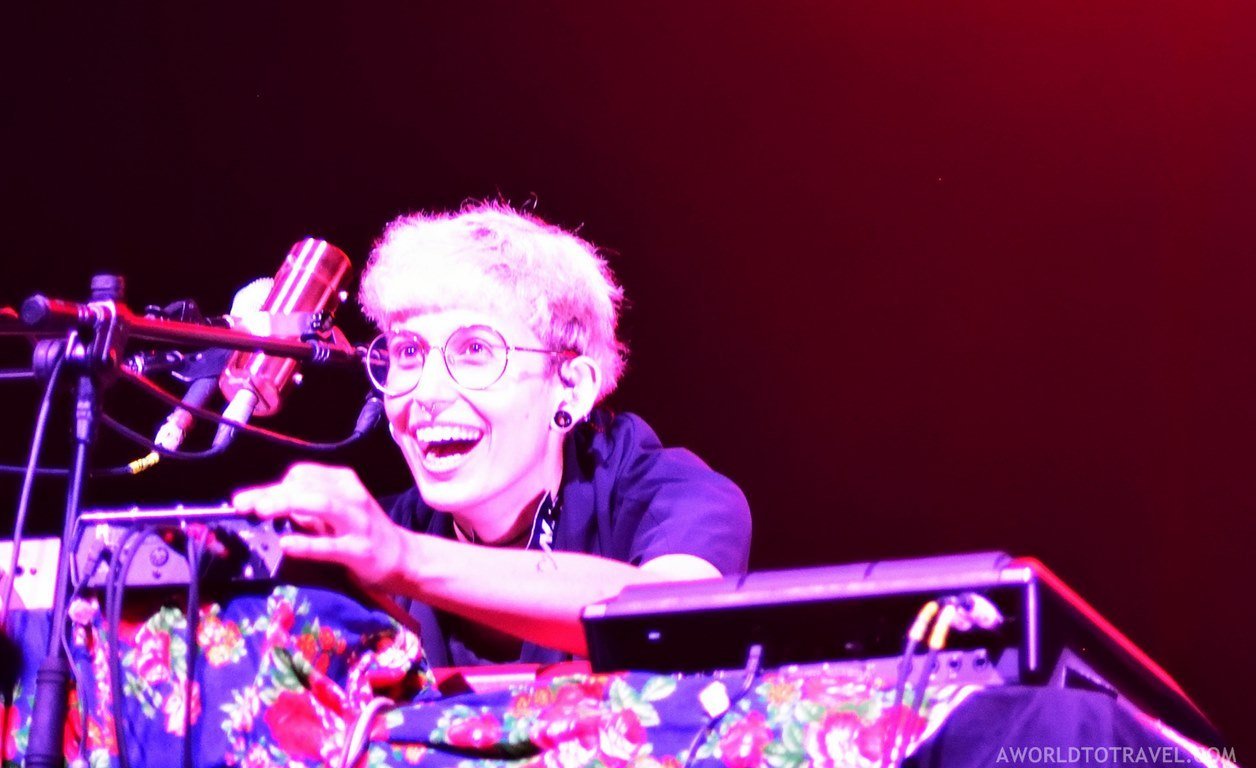 Fleet Foxes didn’t connect as well. May it be due to the low volume or lack of energy; the main stage right before midnight demands effectiveness and slightly more powerful performances. Still, they proved their fame as the sound was correct and many loved it.

Unsure if the next funky – soul band Jungle had as many admirers among the audience as Fleet Foxes. However, the thing is that again, to everyone’s awe they gave a high-class recital that will be treasured for years to come. Seven people on stage, a flawless sound and a solid tie with their public. Their melodies took us all on a continuum in crescendo until the undeniable climax. A brilliant show.

Confidence Man had the hardest possible task of keeping up with the superb previous gig. And musically speaking, they were way simpler. However, the high doses of fun these Australians put into their brief performance, made a dent for sure in that night’s podium along with Young Marco, which closed Thursday’s Vodafone FM stage with a proper mix of house and techno.

The clandestine Vodafone Music Sessions brought the Algerian Tuareg desert rock quintet Imarhan to a stone quarry for the delight of a selected few in the afternoon, an impeccable setting for this hidden gem that would play again soon after for everyone else to enjoy in the festival grounds.

Bringing the show back there, Kevin Morby entertained a significantly larger audience on the main stage at the golden hour.

The cathartic grunge of DIIV worked like a charm, as this young band mirrored their mosh pit colleagues. Indeed, they also felt at home in Paredes de Coura and were seen partying at a number of gigs afterward.

With an always growing audience, the Vodafone FM stage welcomed And You Will Know Us By The Trail of Dead and their charismatic bass guitar, Autry Fulbright II, who stole the show many times during that hour as instrumental juggling has no secrets for him. Theirs was a resounding success too, in line with that night’s trend. 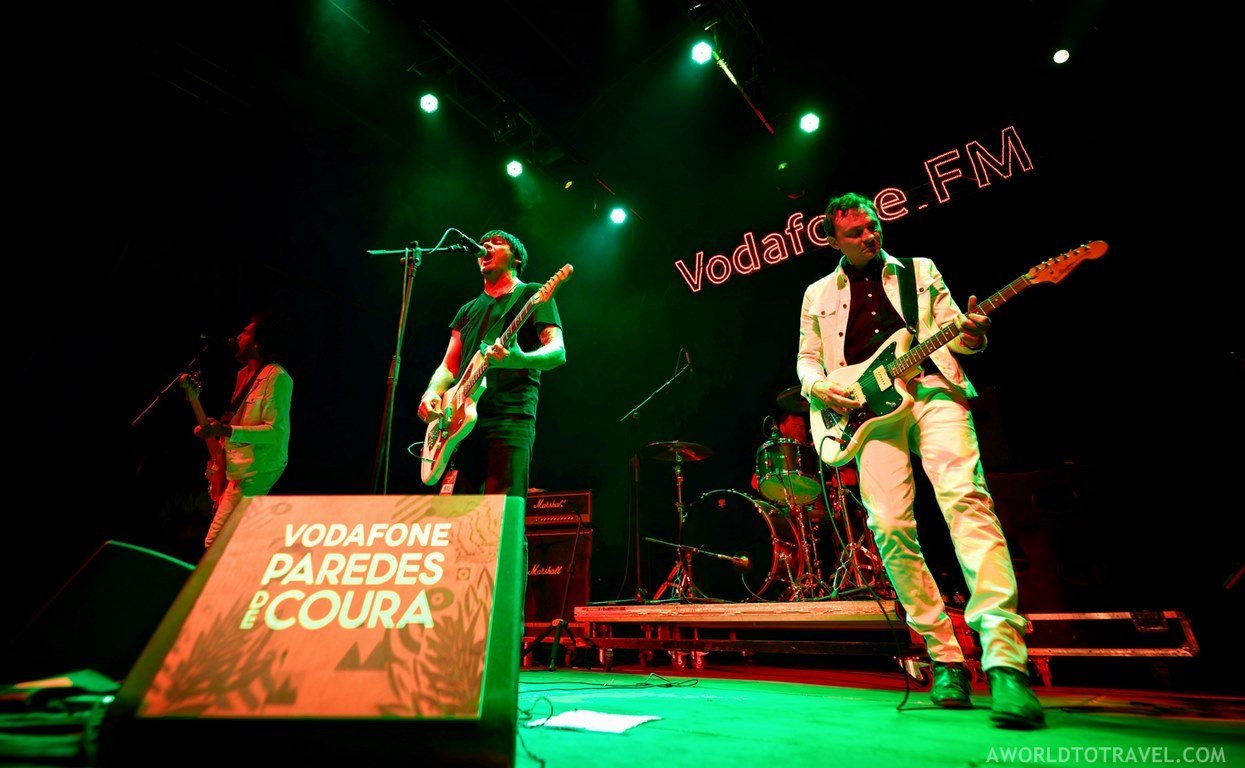 Slowdive came up next on the main stage. Rachel Goswell dressed in passion red, as the sole focus of attention in addition to the focused visuals that consisted of the name of the band, transported their audience to a superior and ethereal place, with its mixture of obscured vocals, guitar effects, and overwhelming volume. Hopefully, we will be able to see this band for a third time in Paredes de Coura soon.

And right after, the first rapper of the musical history of Paredes de Coura and headliner, Skepta, delighted the lovers of this genre; leaving the rest indifferent. A risky bet that seems to have gone well. Will we see more hip-hop and rap in future editions of this festival, characterized so far by completely turning its back on this music? Only time will tell. 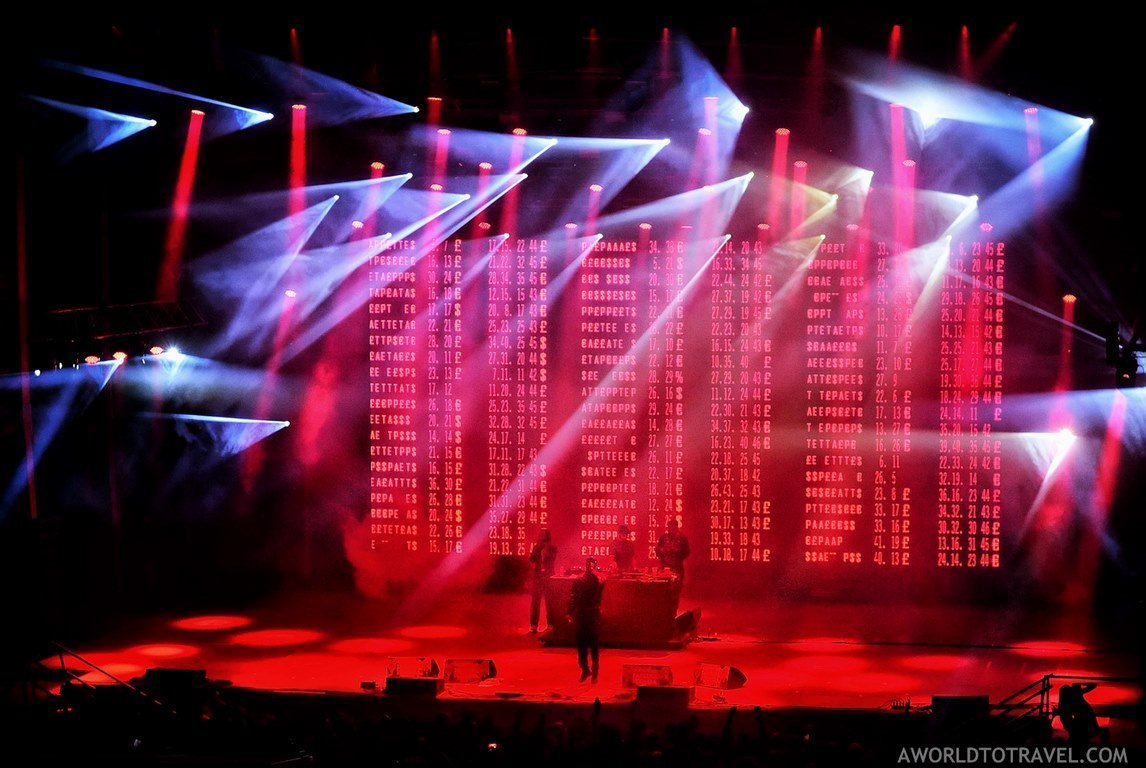 Never that many people gathered on the small stage as to welcome the controversial Russian band Pussy Riot, who started their show projecting a series of universal complaints and painful truths that hooked the audience from the beginning. Luckily no avalanches took place, but this performance together with the headliners of the following day were concerts excessively populated by an audience that lost their manners sometimes. Behave, gentlemen, behave yourselves!

Lastly, the German DJ-producer Phillip Lauer sent everyone back to the camp happy right before sunrise. 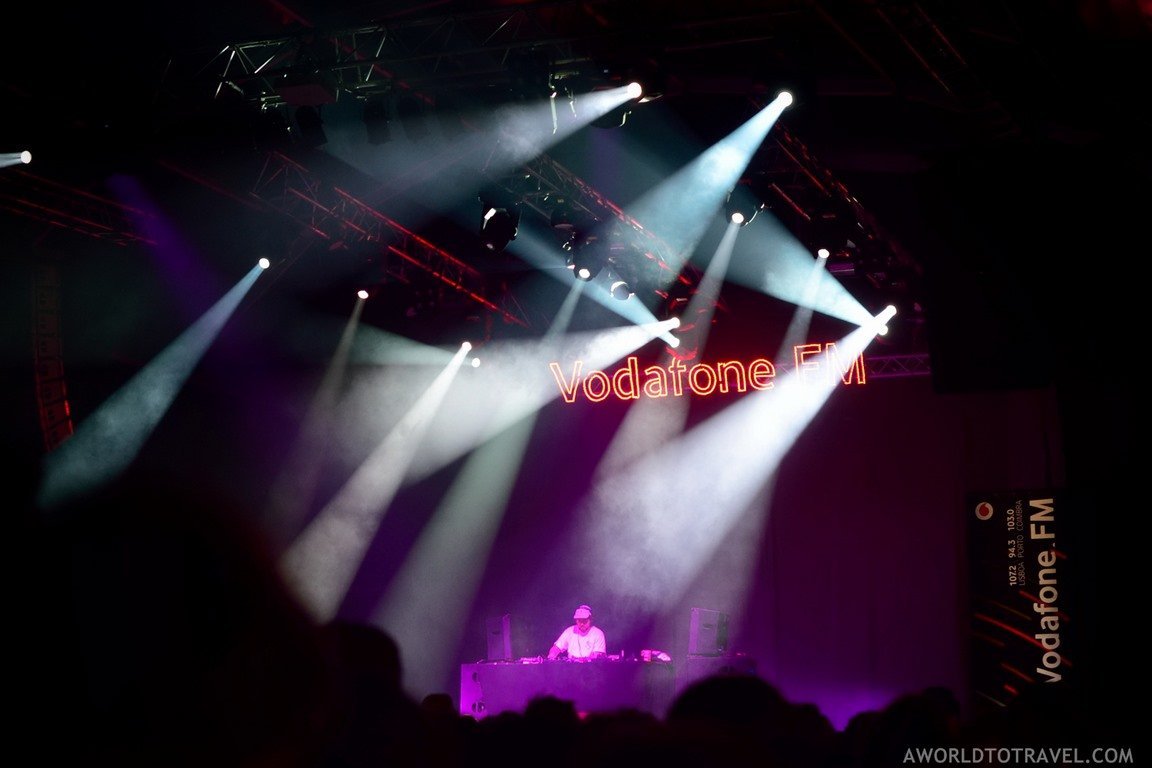 Paredes de Coura last day turned out to be the longest by far, extending its shows until some unlikely hours on Sunday, something never seen here before. However, let’s start from the beginning and the Techno Italian duo we had seen at Festival Forte’s sunrise last year, Ninos du Brasil, as they offered a short hearing in a scrapyard full of abandoned vehicles, that quickly became the perfect stands for the lucky ones attending this undisclosed Vodafone Music Session.

On our way to the festival grounds, we stopped by the busy spot that is the Taboao River beach in the afternoon with Penicos de Prata – part of Vozes da escrita – showcasing the very best of Portuguese poetry on the casual Jazz na Relva stage.

Keep Razors Sharp opened the Vodafone FM stage at 6 pm and Myles Sanko came right after on the main one. Larger than life, the guy hypnotized everyone in no time, giving quite a memorable and sexy show in broad daylight.

However, if we had to pick a name that truly stood out on Saturday, that needs to be the Lebanese singer, songwriter, and actress Yasmine Hamdam. Her tiny black leather corset, Middle Eastern moves, and unique underground music style charmed most of the attendees for good.

Dead Combo, who invited Mark Lanegan to join their show for this festival – and it seemed that they were all coming out from a Tarantino movie’s OST – perfectly fulfilled their role taking the audience to the festival main band. 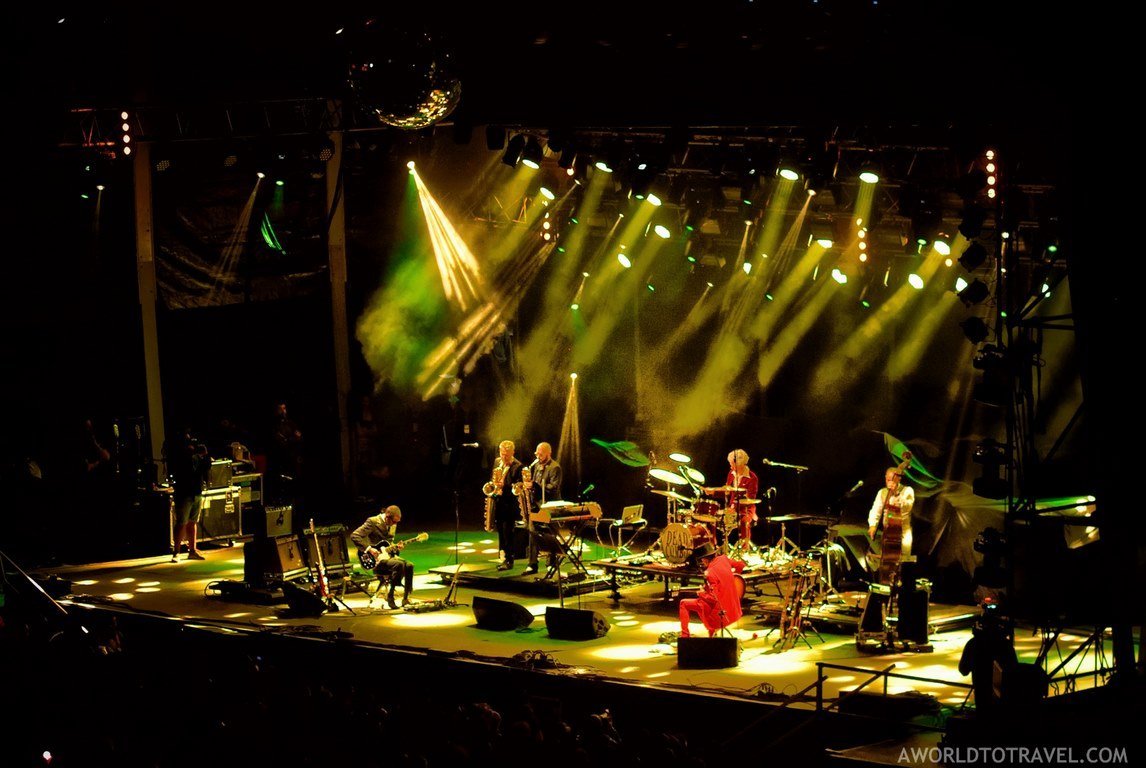 And so the Canadian band Arcade Fire, who had already performed in Paredes de Coura thirteen years back, went on stage and did what they know best: plain magic. Literally, in addition to playing his most famous songs – most of which I enjoyed in 2011 in his hometown Montreal in one of the most epic concerts I can remember – putting a disco ball to dazzle, stage diving as teenagers, showing off the coolest screens of the whole festival and so on; the singer Régine Chassagne appeared in the middle of the audience in an unexpected turn. What a brilliant band and how sweet to enjoy their show in this wonderful setting!

Ninos du Brasil and DJ Kitten kept the party going till 7 am when in an even more unpredictable move, a 13-hour rave was getting started by the Taboao River. And that’s how three DJs – Pedrosa, Mosca, and Bruno – entertained this farewell, which will be remembered as a pretty fun and fearless one for years to come.

Whether we are all chasing youth or simply letting ourselves loose for a few days, we will keep returning to our Portuguese home in August next edition to celebrate the raw, the fearless, the fun and the great music.

To dress as a kangaroo, drink beer for breakfast and roll downhill as a toddler without being judged. To live life on our own terms. God save Paredes de Coura!

HOW ABOUT UNCOVERING SOME OTHER COOL FESTIVALS OUT THERE?