Life should not be a journey to the grave with the intention of arriving safely in a pretty and well preserved body, but rather to skid in broadside in a cloud of smoke, thoroughly used up, totally worn out, and loudly proclaiming “Wow! What a Ride!

We arrived in a cloud of sunlight and dust, the stereo spewing the third-to-last song from ‘Currents’ (the latest from good ol’ Kevin Parker, but you already know this).

‘We’ as in famed rockstar Allan ‘the Cougar’ Thompson, Dr. William Cavero and myself; a truly all-star lineup. This entourage spelled certain doom for anyone who dared to approach our crew: we were in it for real this year. No half-measures and a ‘this is it it’ mindset, as the psychedelic and alternative scene condensed in one place for the next four nights.

We proceeded to settle our base camp close to the parking lot, in a nice hill near a massive testicle-shaped stone; being close to the car was an invaluable asset in the quest for resources that we’ll have to face every noon. 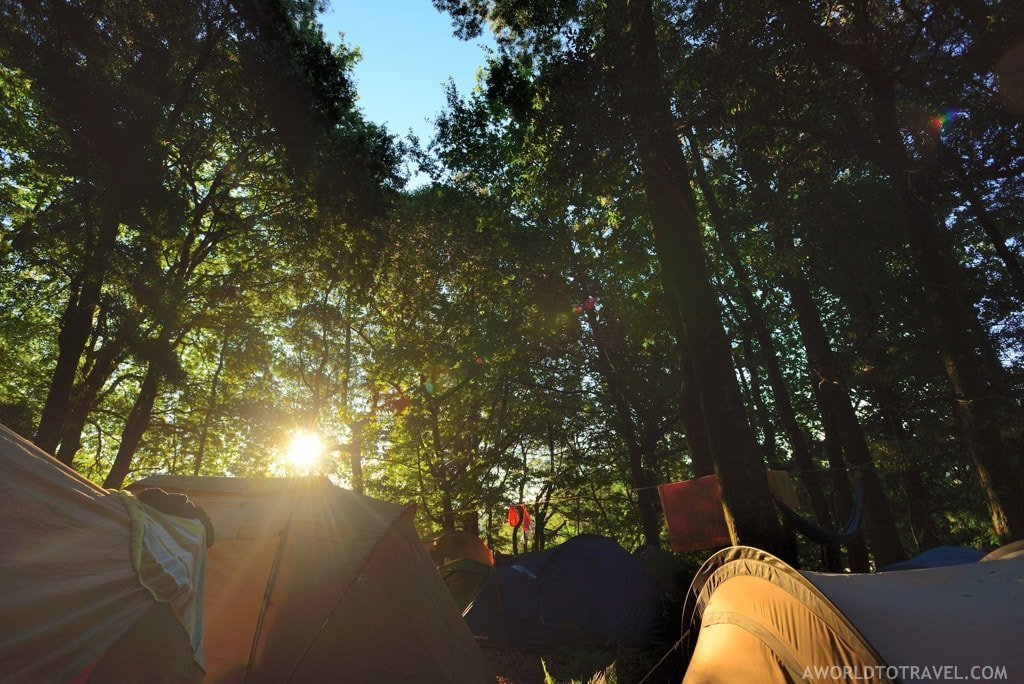 Our original plan was constructing a sort of gazebo to protect our physical bodies from the extreme weather that somehow permeates the entire Coura experience. And I want to make this clear from the beginning, as you can’t really separate the music fest itself from the atmosphere that you fill your lungs with in every breath: it was hot. It was fucking hot, actually, this kind of heat that creeps into your skull and starts to melt your very inner-self after burning every inch of your skin.

This goes quite well with the theme of “fall → death → resurrection → ascension” that lurks at the core of the experience; even as bad as it gets, the sun eventually hides behind the trees and makes way to the blissful night, where anything goes and everything flows.

The river Coura waved at us like an old friend, and the slope that leads into the concert area seemed as steep as ever, it was fondly baptized as “The Walk of Christ” when we first lay eyes on it three years ago.

With our tents distributed in a more or less circular fashion, there was plenty of space to expand our territory as soon as more colleagues started to arrive at the promised land. Yes, we had a really good camping spot this year…

…until we came back from the first trip to the village. The green field in front of our tents was no more, as we had to dribble through tents, ropes and chairs to go back to our own sanctuary. But this was not surprising. They had sold every single ticket they had this year.

Suddenly we realized that we were in the middle of a goddamn sell-out fest.

Our plan was quite simple: arrive there the day before, settle camp in the best possible spot (shade becomes an essential resource during the day) and visit the town for some drinks. Nothing fancy, just a warm-up party with some cigarettes and alcohol. Then, the infamous keyword was tattoed again in our minds: “Despenalizado”.

The town of Coura could be described as a ‘big ass road with houses scattered around’. But on that day it was more like a human tsunami.

A lame DJ wannabe was punching tunes that had to be loud enough to rise above the noise that such a large amount of people produced. And in the pubs, asphyxia was the name of the game. We retreated at about 3 AM, with our pride intact and the feeling that this was something really big.

I open my eyes and suddenly felt it. Oh yes, so familiar, yet so loathed. The heat.

My tent transforms into a boiling pot which I have to abandon immediately. I ask for the time, the Doctor answers. “Half past ten? ‘

Must be a miracle.”, the Cougar jokes about our general lack of sleep during this kind of trips. He was in for a surprise this year. A brilliant idea here was making the one and only decent meal we had during the entire fest: a mushroom risotto for nine people, so we ate 3-4 spoonfuls each.

Thinking about it, it wasn’t that decent after all. But enough to kick that hangover feeling that I will get to know so well during the next days.

Let’s talk about music now, shall we?

Just one word: Slowdive. Their gig started and finished with that single utterance, on the big ass screen in the main stage. In between, absolute heaven, one of the most orgasmic experiences I ever felt in a music concert.

I remember Molly, my friend’s girlfriend, holding my hands and waving them through the air for most of it. Marvelous. Astounding. The wall of sound impacted everyone of us standing in that hill, piercing our brains like flying clouds made of concrete. It’s hard to describe with words, must be seen and felt. Amazement poured all over Coura with these people.

As for TV on the Radio, a big disappointment, I can’t say if it was only their fault but if Slowdive had their volume at ten, this guys took it down to five.

Also our heart was still racing and there was no place for anyone else at that time in it. The wall of sound from the previous artist still echoed all over the place and the gig sounded literally like a recording of a TV music show being played through the radio.

After charging our batteries (in every possible sense) we arrived at DJ Fra for a discreet EDM session.

The party ended officially at 4.30 AM, but we haven’t had enough. The first day is always a different beast, you get caught up in the party and don’t know when to stop.

We should have known, as I am familiar with the consequences of giving it all the first day.

After regrouping at our camp, the party roared with every cliché available: the crying Sue, the party animal, the lovebirds, the not-so-lovebirds, the group of friends who bought their booze together… you name it. Long story short, I collapsed in my tent at 10 AM. The Doctor retreated a bit earlier.

The rest of them? They invoked a rush of energy and headed straight to the river, to “enjoy” the morning sun. The Cougar was really prowling this year. 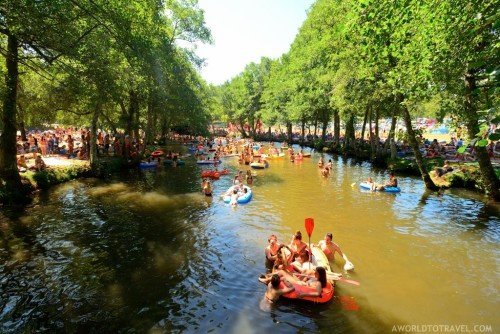 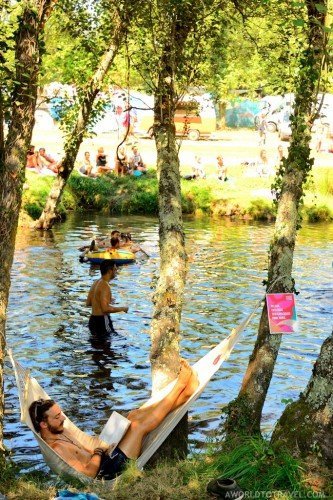 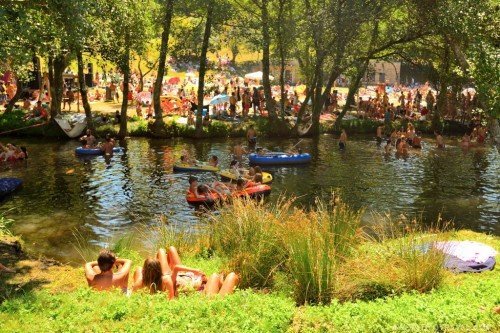 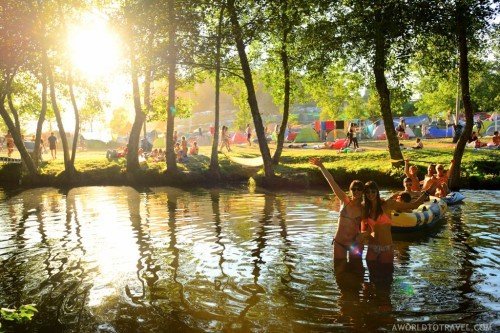 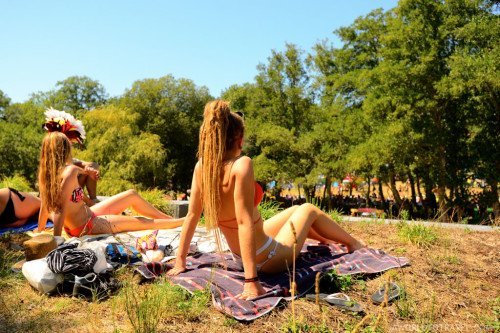 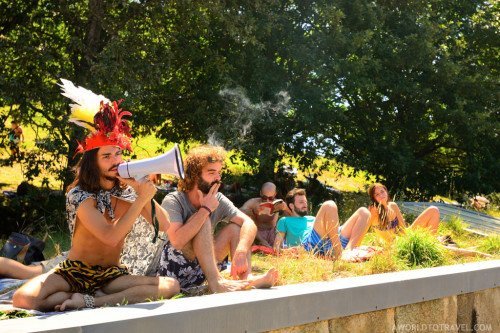 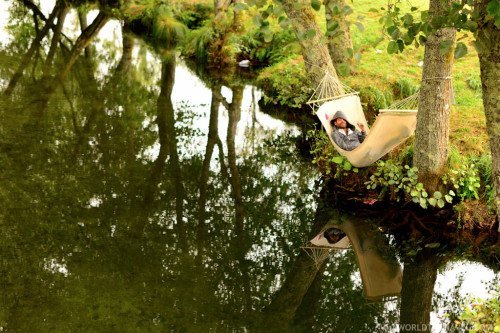 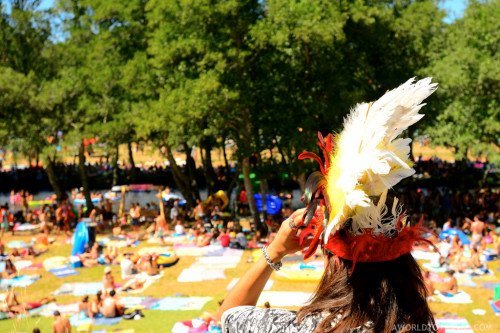 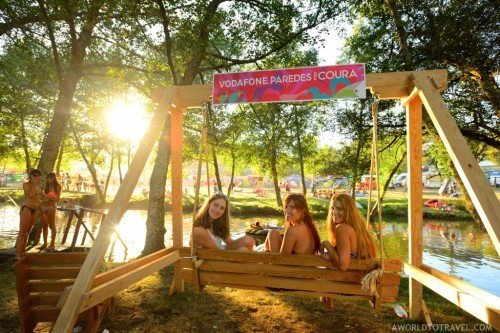 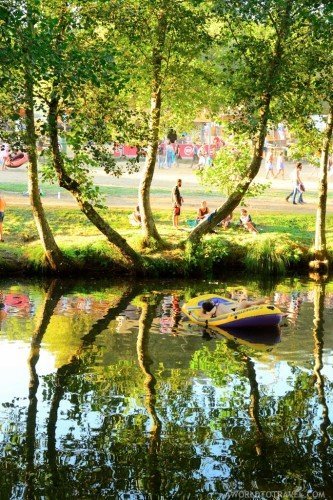 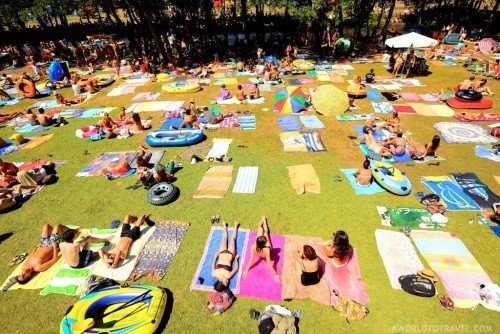 Oh my God. If dying is half as painful as the hangover I sported, I want to live forever.

At 11 AM the almighty sun made my dwelling into an oven and I was an uncooked pizza. Literally, I felt like a pizza. Couldn’t move from under the gazebo until 14 PM, trying to hide from the king in the sky. Paredes is a fucked up lover indeed.

After a miraculous recovery which I won’t discuss here for legal reasons (don’t worry, it doesn’t involve any kind of ritual sacrifice or anything) I was ready for Pond. 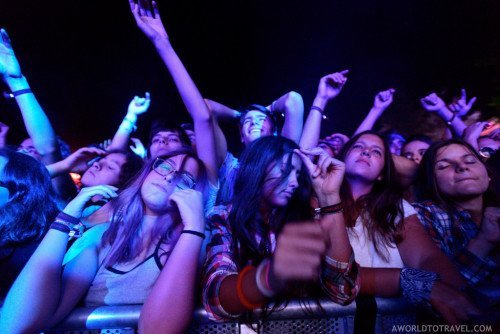 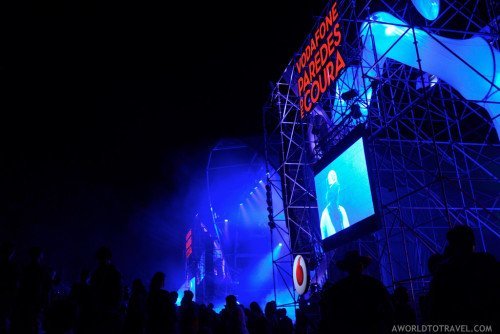 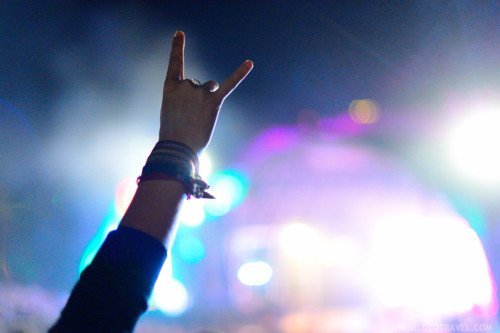 The crowd quickly filled the space in front of the small stage and the show began. And then, forty-five minutes later, it ended. Everyone was left with a feeling of void, we needed more of this psychedelic masters. “There must have been some mistake with the scheduling. I need more Pond for fucks sake!”, the Cougar appeared in our meeting point, roaring like a lion with sleep deficit. It was the big day, indeed.

Steve Gunn was decent enough, I could listen to half the show from the top of the hill that oversees the main stage and I can assure it was… well, decent. 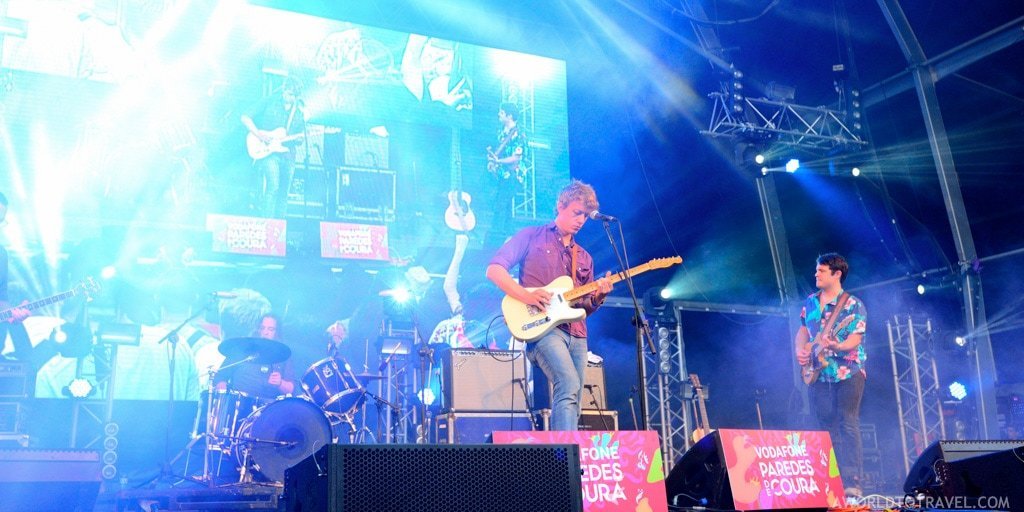 White Fence were the first to exploit to its fullest the small stage. Such a powerful act was one of the highlights of the entire fest. Their high energy performance was just what I needed to shake off the feeling of being at “just another music fest” that started to permeate our team after two hours of being surrounded by people. 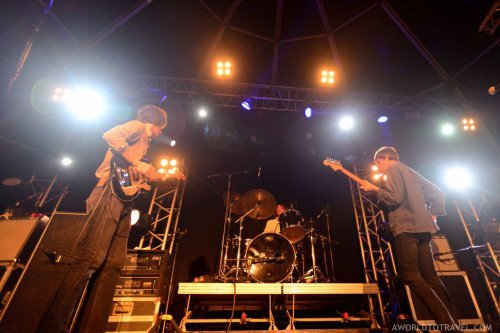 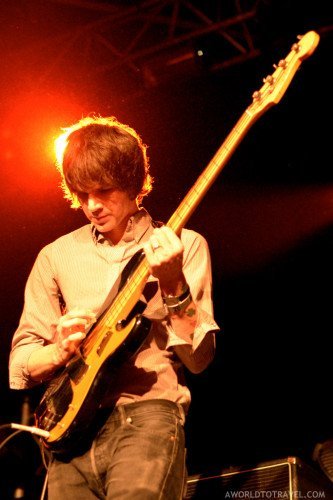 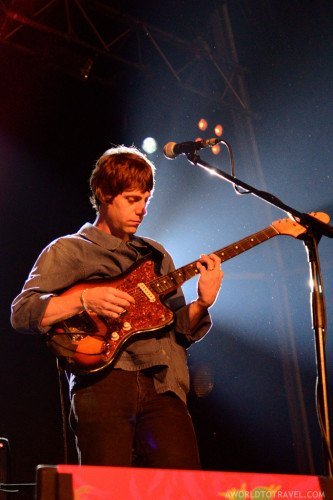 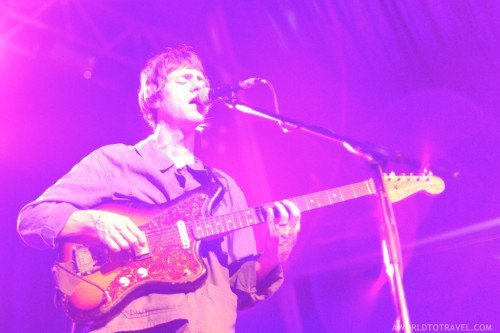 The Legendary Tigerman gave us the chance of getting some much needed food (that bifana was a life-saver) and enjoying some eclectic music at the same time.

And then, ladies and gentleman, came the Big One.

The reason why I had so much faith in this year’s lineup. I remember being at home, happily scrolling down through garbage in Facebook, when it appeared in front of my eyes:

“Tame Impala confirmed in Paredes 2015″. Since that very moment, I knew this year was going to be the experience of a lifetime.

The aussie psychedelic master Kevin Parker looked ready, the public was crying for him for ten minutes before the lights went off, just a green bright circle that started to dance to the rhythm of “Let it happen”.

I remember my pupils contracting, the chills running up my spine as the first chords of the song pierced my eardrums. After that, the only sensation I truly remember was intense happiness, the breeze gently touching my perpetually raised hands and singing every single tune that came out of the speakers. 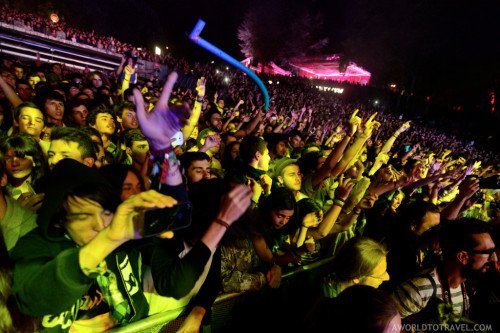 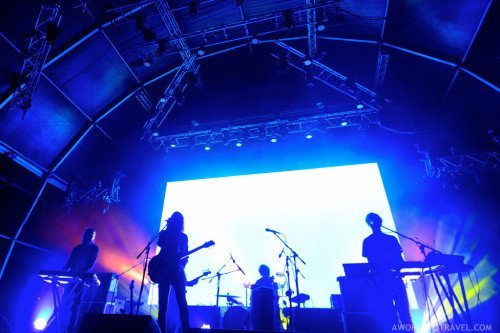 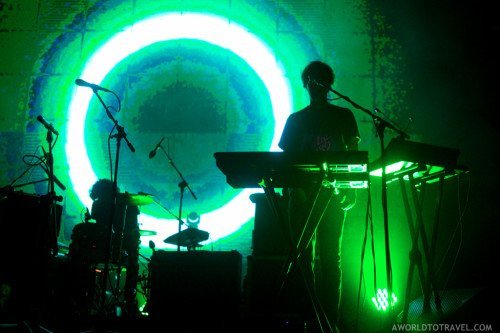 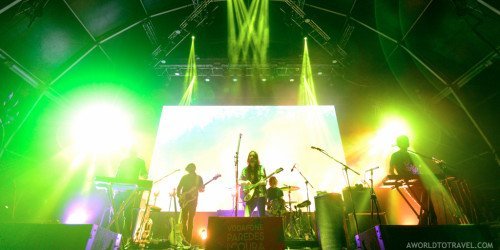 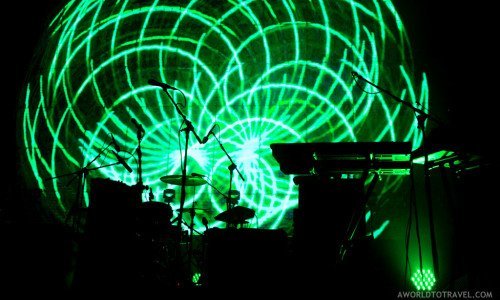 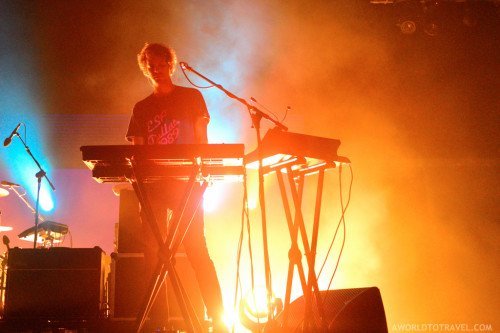 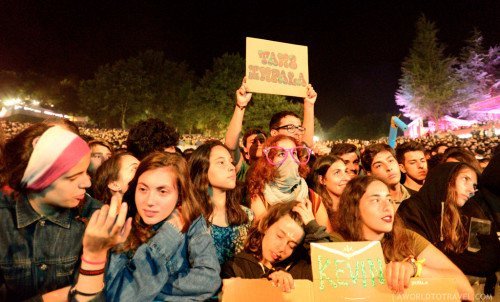 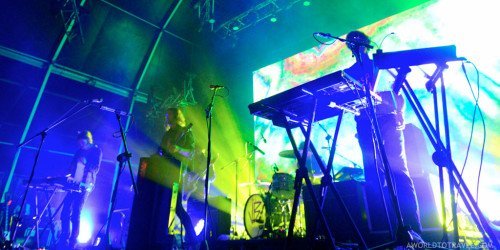 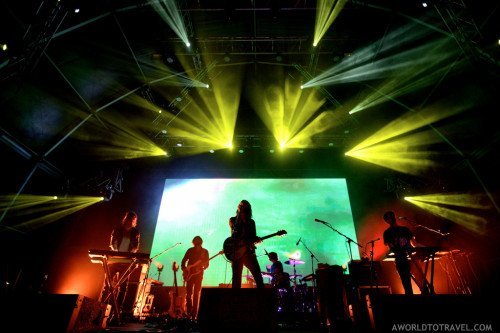 The visuals on the screen, the sounds, the people… everything working so… perfectly.

Perfection. That’s the word. Kevin was forced to make an encore after finishing with “Apocalypse Dreams”. At that point, my heart was ripping through the esophagus, as my ribcage wasn’t big enough to contain such emotion. The Doctor nodded through the entire gig with his sunglasses on, lost in God-knows-what paradise inside his mind.

The Cougar was like a five year old kid with a brand new Nintendo 64. “Wow. Just wow.”

After this religious experience came a must-see in any Paredes de Coura: DJ Nuno Lopes.

We love and appreciate Nuno like a father appreciates his father’s day gift made at school by his eight year old kid: it’s not the most beautiful or practical thing ever but… the spirit he puts in it! 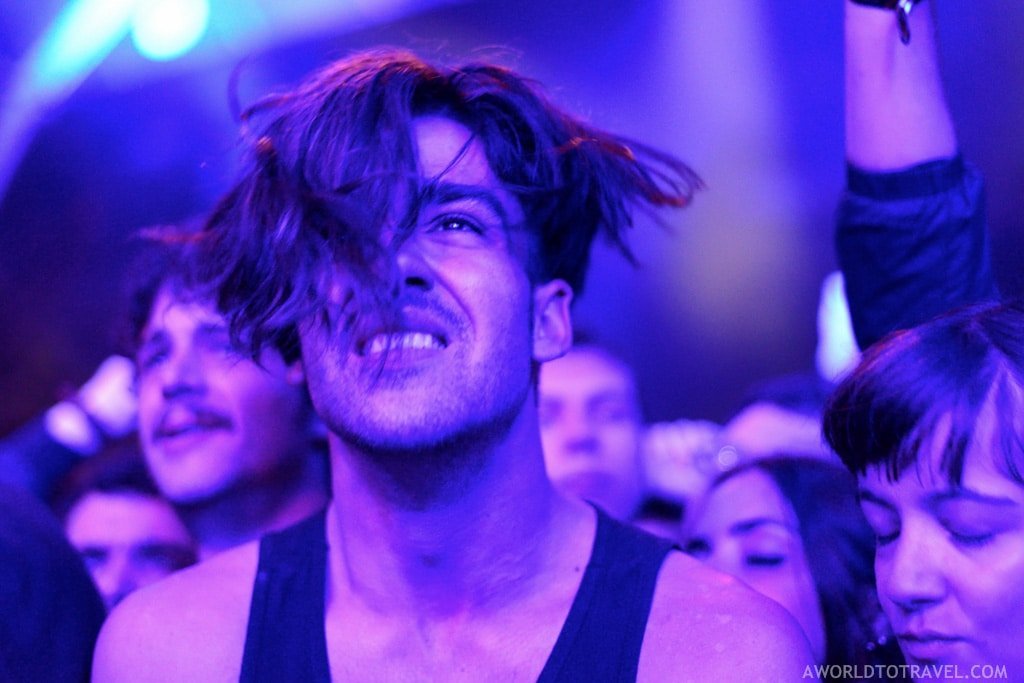 The connection with the audience was complete. After he finished at almost 6 AM (a fucking 3-hour session), I bet he went on and attended the secret rave that I could heard from our camp. And that he kept dropping choons through his phone, hooked to some improvised soundsystem.

Words: Lois Agrelo Arxóns is a Galician writer from Noia who also happens to love music. He writes poetry, narrative, scripts, and articles; you can catch a glimpse of his work in The Ganja Papers: theganjapapers.blogspot.com. He also makes music as De Tranks . Follow him on twitter @jodidoavogado and Facebook The Ganja Papers

Photos / Video: Taken by Jose Martinez and Inma Gregorio who have been enjoying this music festival since 2011 and are already looking forward to 2016’s edition.