We arrived at about 11 AM, shrouded equally in heat, sweat and dust. 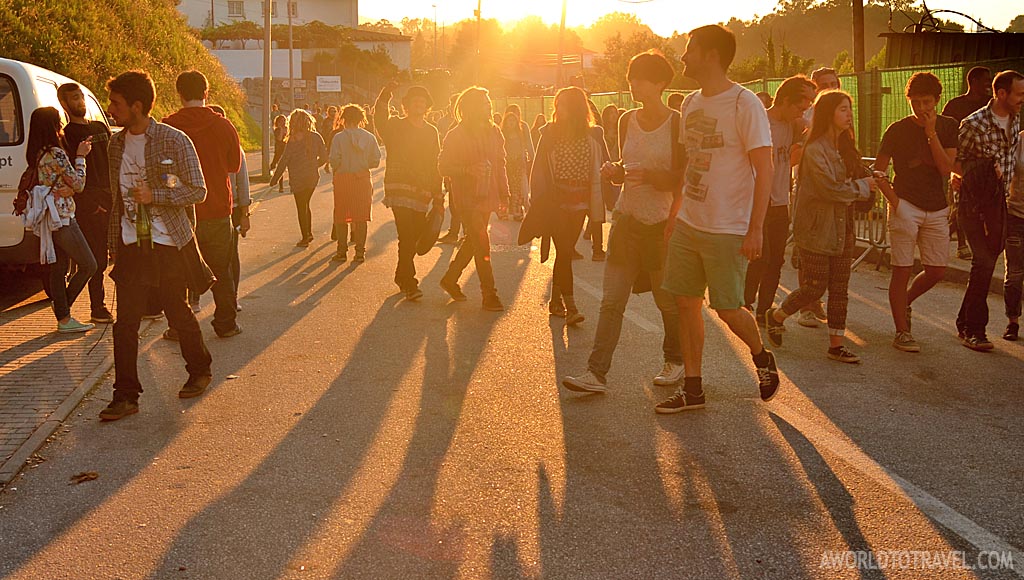 The base camp was nothing but a mere project when we finally arrived after walking several minutes along the river, stepping in one or two tents on the way there. The view was appalling: lots of weeds covered what we will use as a bed during the rest of the fest. Fortunately I had brought a sickle which at the end of the week was used like an Irish whore during St. Patrick.

So the modus operandi was clear: just chill at the camp until the music starts, even though the first seemed to be the weakest day, just serving as an intro to the big bang boom that was Thursday’s schedule. We couldn’t be more wrong.

I remember that someone realized we didn’t buy any alcohol, so two of our mates went to the village to get some good old booze, as the heat was intense and the smokes were starting to get heavy in our eyebrows. At 5 PM, after cleaning the camp of everything sharp and spiky we went to the river. There’s where everything started. Before I go on, it’s worth mentioning the brotherly spirit that permeates Paredes de Coura. Every neighbour is your friend, everybody is high as a kite and almost anything goes. Paredes ain’t for the faint of heart. They even have a word for it: “Despenalizado”. I’ll leave you the pleasure of googling that one. 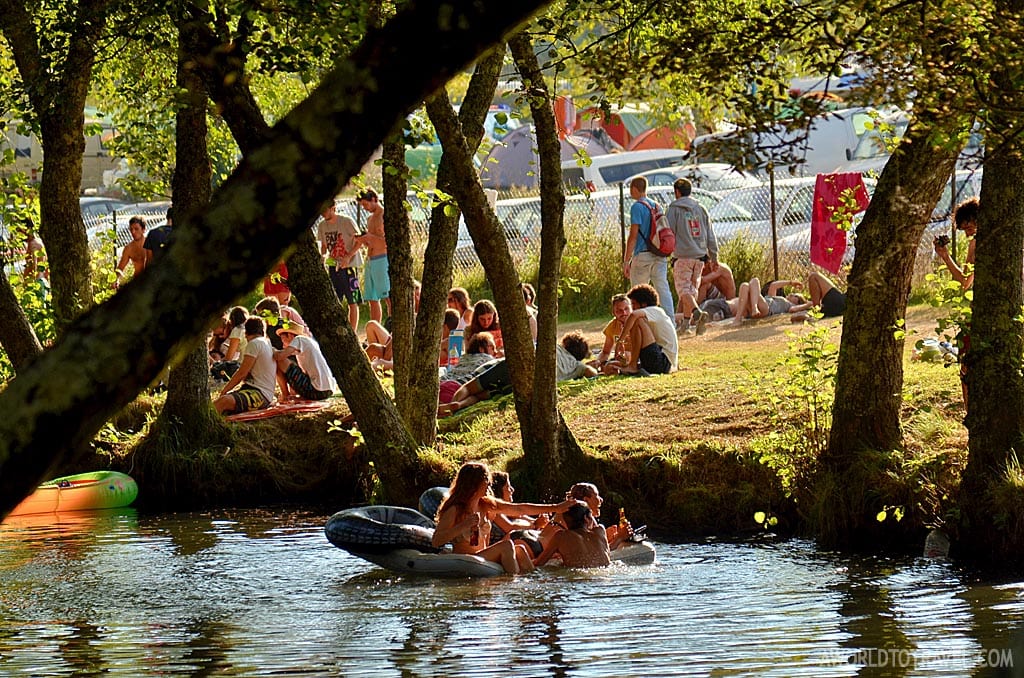 So at about 10 PM after enjoying a cold shower (not me, I spent the whole fest without showering once, following my principle of not just go to places but live them. That way you will end up loving them.) we went up the Walk of Christ (as we affectionately call it) to watch the performances: that was the whole idea of coming here, wasn’t it? After getting our drinks and figuring out what was going on, we arrived at Cage the Elephant, but I will confess that a didn’t pay much attention (sorry for the fans). Janelle Monáe seemed equally boring to me, so I kept my agenda of keeping up with the rest of the fest, a daunting task even this early in the night.

Then suddenly from nowhere (as in me asking “who the hell are these guys?” after the first song) came the best act of the day, Public Service Broadcasting. Mixing bold riffs, one of the most sophisticated electronic I have ever heard and 50s ads visuals/samples, they truly shined and I had a ball, dancing like a maniac. 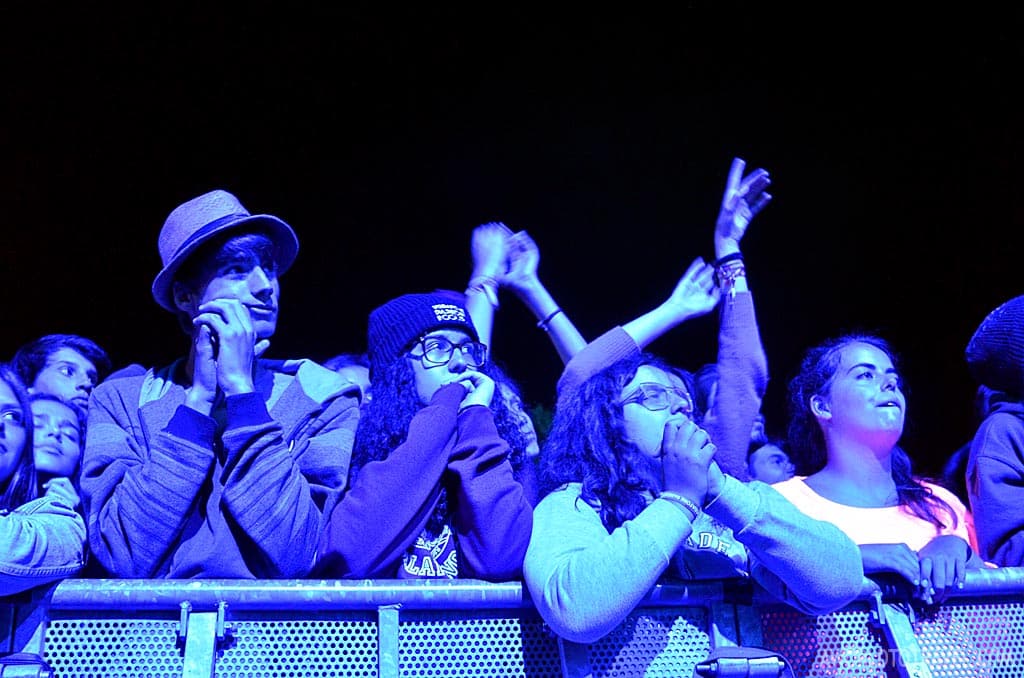 We changed stages to catch Cut Copy (DJ Set), after PBS our expectations were already fulfilled for the day but then came perhaps the biggest surprise of the fest. The set started unremarkably, we even exited the crowd to get some fags. But then, when we came back, we looked closely at the DJs and even to this day I’m not 100% sure but I think (and hope) that at some point Mac DeMarco himself took the plates and spun some records along with Cut Copy (all of my companions agree with this and we even have a picture with “Mac’s” face conveniently obscured by a flash). Whatever happened, the set got increasingly amazing and went rockin’ well past 4 AM. 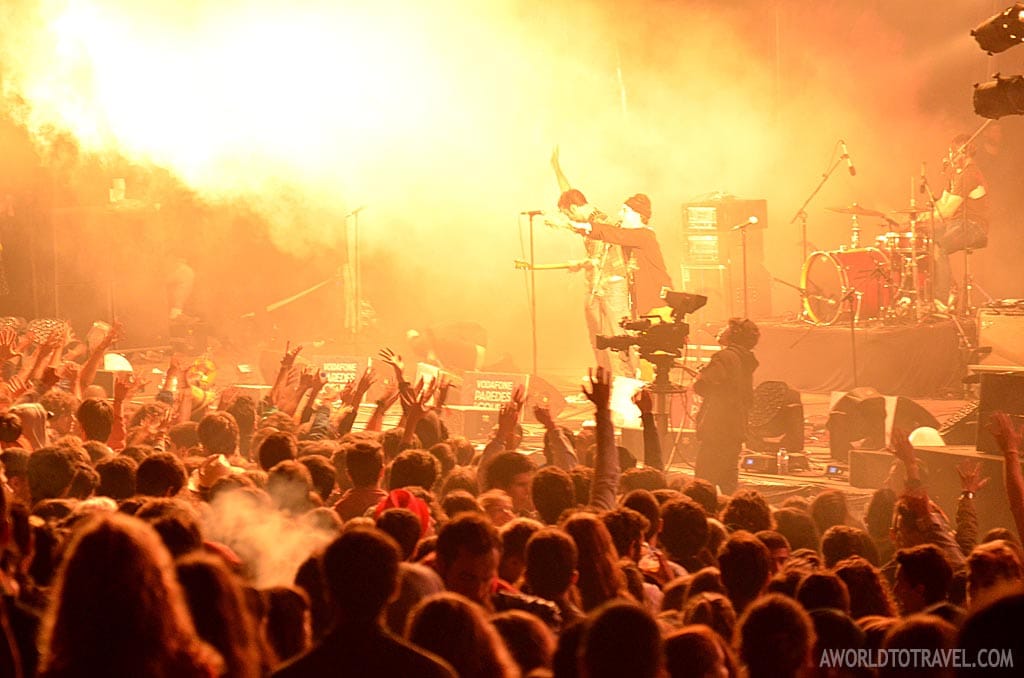 I can’t remember how I got to base camp, the only thing I know is that I couldn’t sleep at all, forced to watch how the ceiling of my tent danced before my wide open eyes. Then at 7 AM a person who was with me (and who will be referred only as “my partner” from now on) and I tried something… different. With obviously unexpected consequences (save from the total and absolute sleep deprivation, a rule that both of us would follow for the remainder of the festival).

During the morning, I went through several stages.

I think I saw God, the clouds reconstructing themselves into Aztec and Greek mosaics, I felt every non-human living thing in a 2 km radius give me absolute peace of spirit. And I just sat there on base camp, gazing at the world unfolding its soul to me. Oh, and I also tried to charge my phone, like a responsible adult, a trip that went abysmally wrong.

Anyway, it’s useless to try to explain that morning to anyone. I remember waking up at 5 PM, after a horrible one-hour nap in the river. A photographer came and talked to my zombie-self (my companions described my state as “doll-like”) about snapping some pictures of me and my Beatles’ t-shirt for a photoset of people with clothes of bands which don’t play in fest. Or something in those lines, I just clicked “yes to all” and let the man do his thing, hoping that he would stop asking questions at some point. Back to base camp, my partner was recovering from a nervous breakdown induced by paranoia. Way to go.

So here we are, the big day, and the general condition of our party could only be described as “wreckage”.

Nobody slept for more than 3 hours, due to the intense morning heat and the frenzied night we had. Each sip of Somersby cider felt like a blessing, each cigarette a nail driven through the throat (but we needed that smoke) and food was completely optional. One of us complained “taking it easy this year, huh?” I immediately flipped him off. 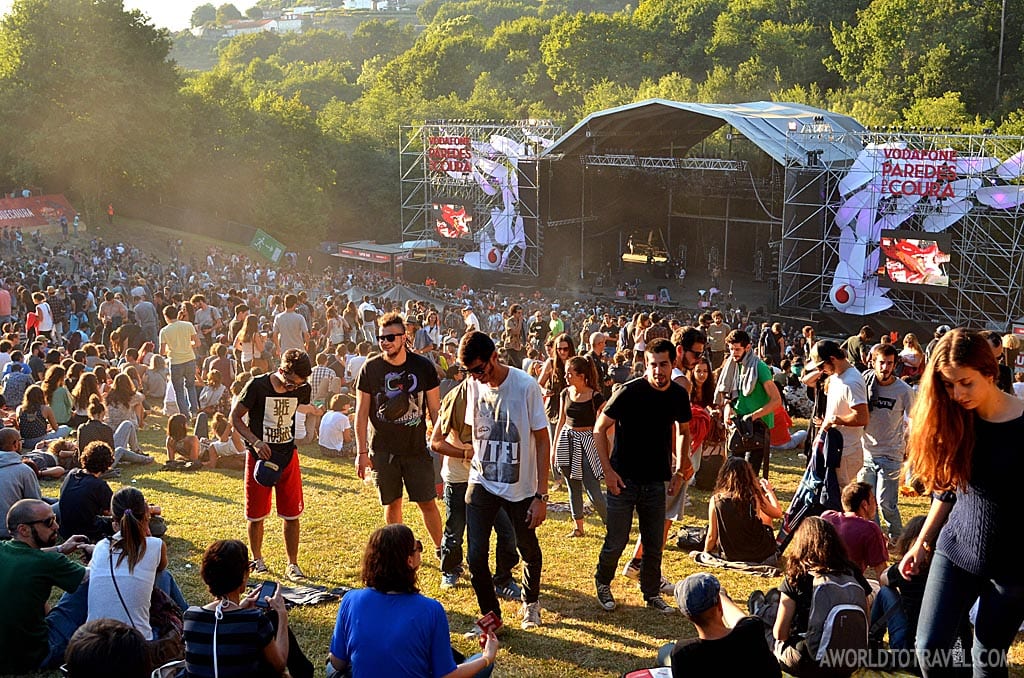 So finally we check the schedule, Thurston Moore being our first stop (though the next day  everybody praised Seasick Steve’s performance, maybe the winner of this year’s “Why the fuck did I miss that? Oh wait, I was half-dead” award) and a really good one, albeit a bit boring (we spent half the show just yelling “Sonic Youth!!” to them. Our fault) And now (we couldn’t even see Mr. Moore finis) this year’s featured performance, Mac DeMarco. I only have to say it was breathtaking, maybe a bit shoddy in the sound department (not Mac’s fault, more like a lazy/bad sound engineer) but the overall show was amazing. It needs to be seen, the crowd going up on stage and the good vibes that the entire thing has will leave you wanting an all night long party with Mac. We looked for him during the entire fest to no avail. 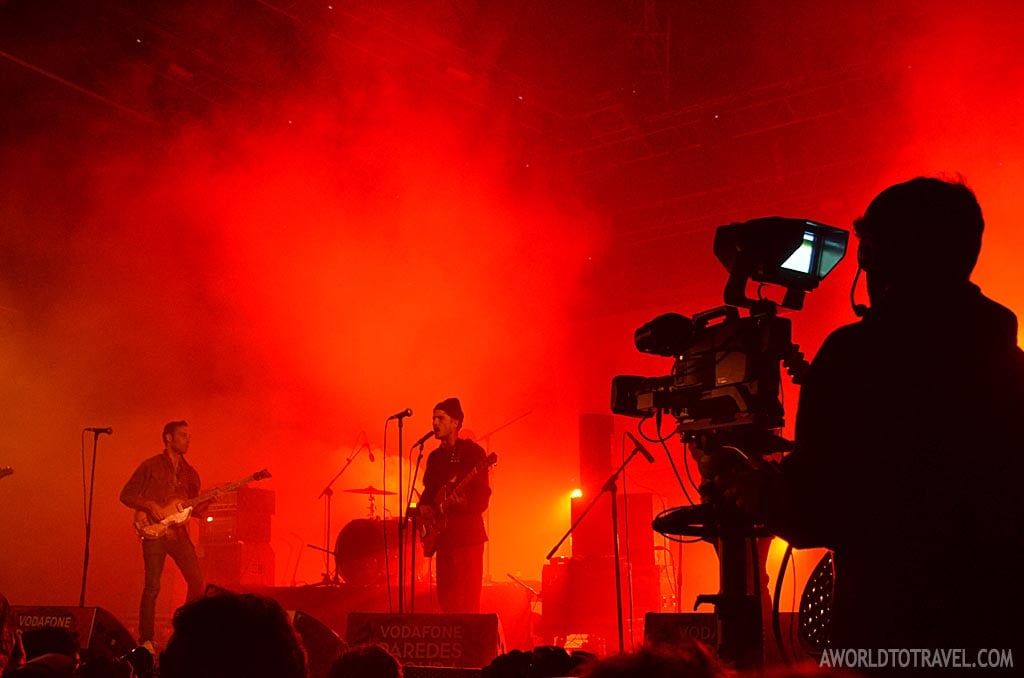 After this, I was feeling alive again, ready to punch my way to the front of the crowd in the next act. Little I knew what display of power and raw energy was about to be unleashed in the “Palco FM”. Thee Oh Sees, for me and almost everyone else was the peak of the fest, musically speaking. Brutal ‘pogo’ dance, completely insane crowd, shrieking guitars and, most of all, pure and unadulterated fun (well, maybe it was a bit adulterated); are only a few images and concepts that pop in my head when I try to describe or even remember what the show was like. Another one that you have to see for yourself, no description or chronicle will ever be close enough to the real thing. 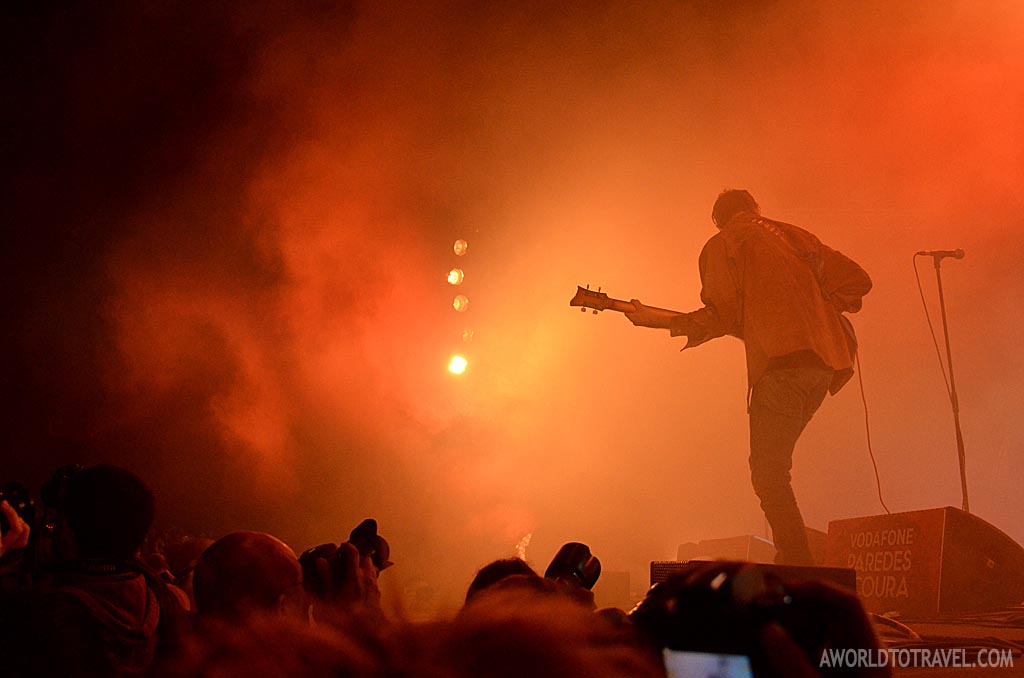 Franz Ferdinand was okay I guess. I was still shaking from Thee Oh Sees so I just tried to get a peaceful spot and listen to the songs that I knew. During the gig, a huge crushing wave of people went berserker, so I had to push my partner out of the way and then we just chilled for the rest of the show. Walked back to base camp, while my partner fell asleep in her tent I heard some shouting outside, went to check it and it was our neighbours, screaming like animals (mostly hen-like sounds) and shouting “Oh yeah!” in a very peculiar way. I followed the shouting and invited them to a smoke, then went back to the DJs as I felt another rush of energy coming from nowhere. My companions were filled with joy when they saw me running up the Walk of Christ so we celebrated near the bathroom.

I remember falling unconscious at about 6 AM in the hard floor of my tent. 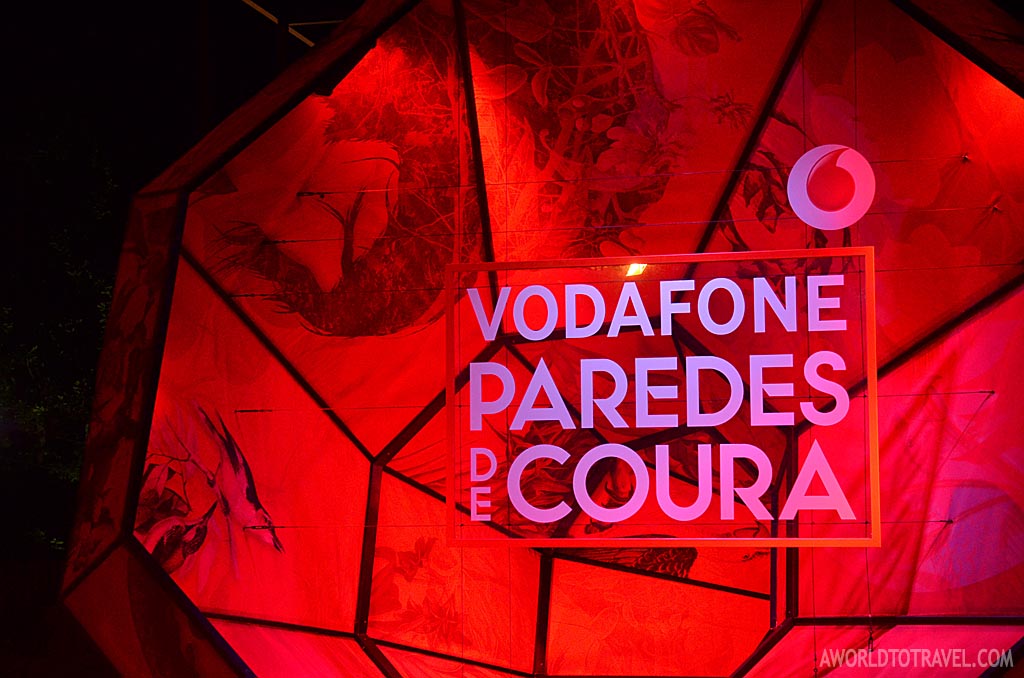 Words: Lois Agrelo Arxóns aka “J. Duke” is a Galician writer from Noia who also happens to love music. He writes poetry, narrative, scripts, and articles; you can catch a glimpse of his work in The Ganja Papers ( theganjapapers.blogspot.com in Galician, also an English version ). He also makes music as De Tranks . Follow him on twitter @jodidoavogado and Facebook The Ganja Papers

Photos: Taken by Inma Gregorio, edited by Jose Martinez who have been enjoying this music festival since 2011 and are already looking forward to 2015’s edition.