A One Week Morocco Itinerary Along The Atlantic Coast

Dreaming of a Morocco road trip? Nevermind the sunset overdose to come – after all, we must be afternoon or evening people – under any light the following Morocco trip is well worth it.

One week Morocco itinerary along the Atlantic coast

Below is a map of our Moroccan itinerary from Rabat to Agadir, with the six stops we consider essential.

Although we relied on public transportation, using mainly the excellent ONCF train network between Rabat and El Jadida, buses – CTM and Supratours – from El Jadida to Agadir, and petit taxis to move around in cities; we would recommend to think about a road trip and check Morocco car rentals before making a decision. Roads are in great condition along the coast, gas is cheap and we still have to see one traffic jam. This Moroccan region by the Atlantic ocean is a very easy one to explore!

That said, let’s go through all the stops, cities and towns you can’t miss on a Morocco coastline road trip: 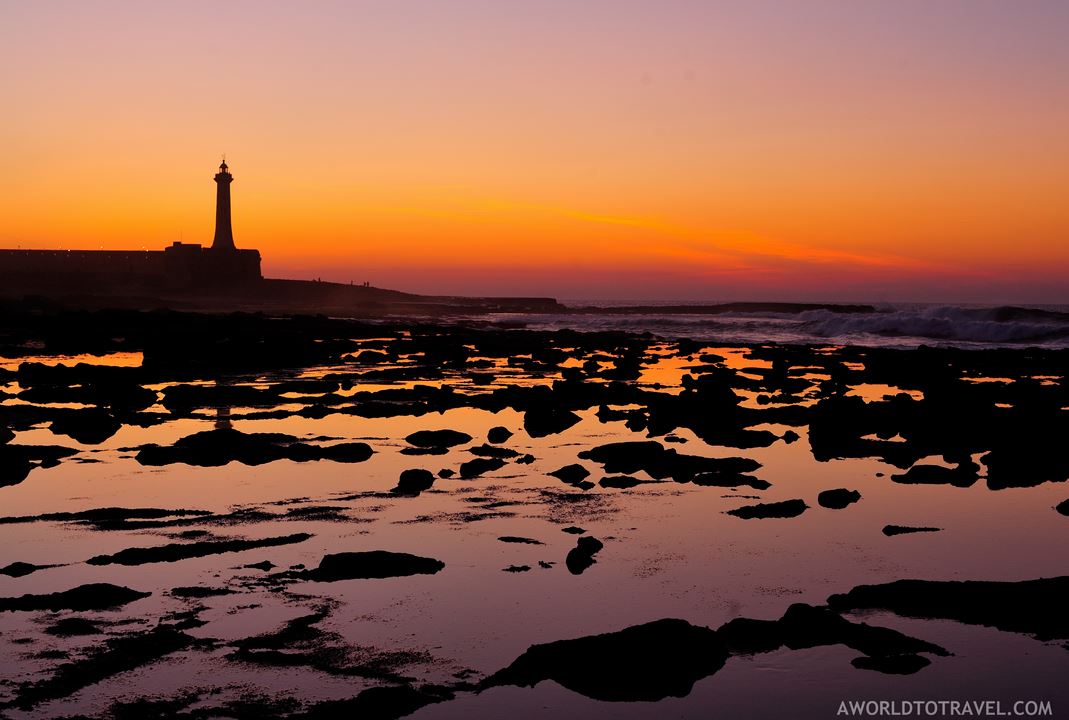 Rabat is the most European-kind-of Moroccan city we have encountered to date. My brother had already warned me that this city was a must, and he was not wrong.

Perfectly connected to Fez, Meknes, Tangier, and Casablanca by train; the capital of Morocco is an unpredictable city. Not because of its size, buildings or medinas such as it would be the case with Casablanca or Marrakech, but because of the pleasant combination that results from the union of the most traditional with the most modern Morocco, all of this by the Atlantic coast.

Thus, from the breakwater ‘Ocean view’ a kaleidoscopic city formed by an unparalleled amalgam can be admired. Cliffs where young couples watch the sunset, bodyboarders with the Rabat lighthouse in the background, sellers of mint tea and coffee, the serene Kasbah des Oudayas, a sleek medina with wide streets and plenty of light, giant cemeteries on the slopes of the city, a polished city in the train station surroundings and beyond, and the ever-present minarets that surely bring you back to Morocco. 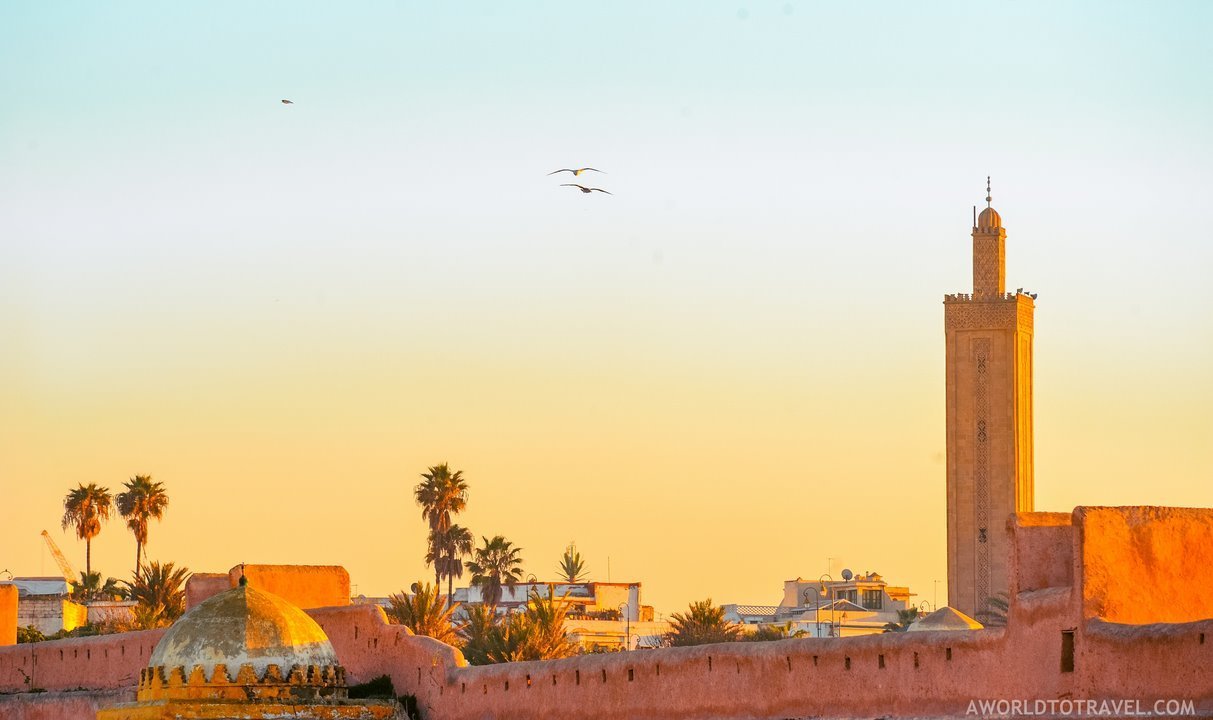 In Rabat, we had the most excellent sushi and then went to sleep in an unlikely and filthy room, only because we booked it last-minute when all the city center hotel rooms cost way too much to be a good choice.

We will return to Rabat though, and hopefully, will remember to book our room there in advance. 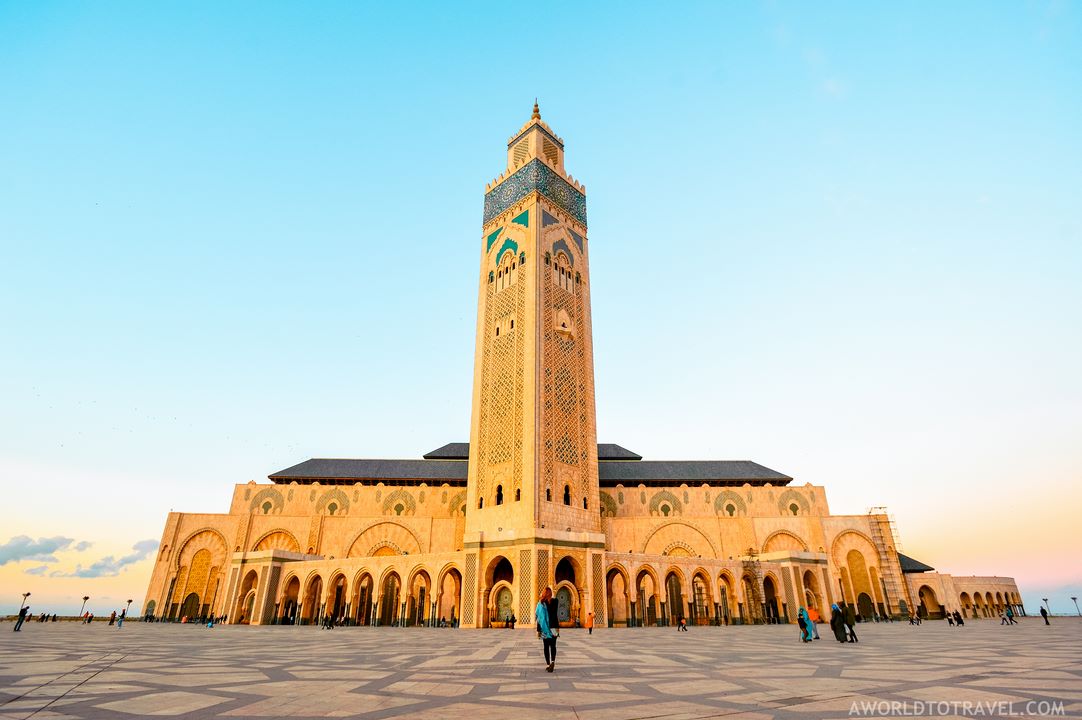 We know that Casablanca has much more to see than the great Hassan II mosque, always on top of every list of the best places to visit in Morocco out there. In any case, we could only spend an afternoon there and of course, it could not be missed.

Remember that to visit it, if you are not Muslim, you will have to do it between the hours of prayer. We entertained ourselves taking photos until the sun went down and when we finally got ready to go in, it was too late. Too bad. 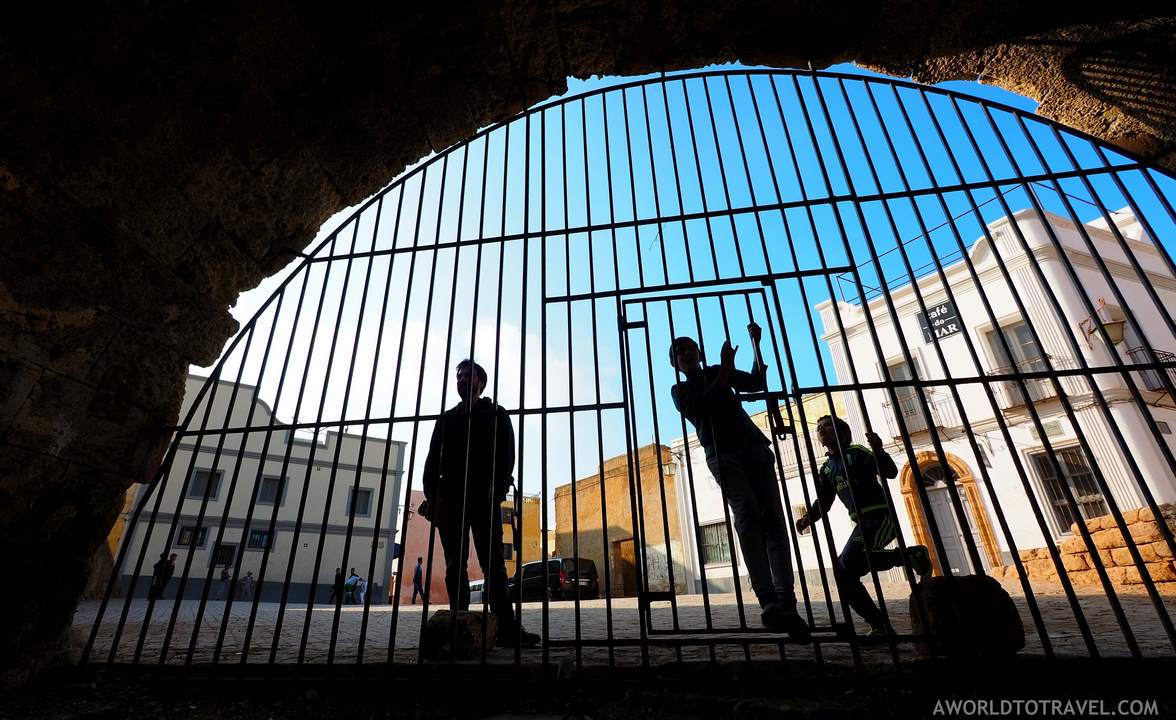 What a surprise this city was!

As it happens with the best things in life, we were not expecting anything.

Yet pleasantly, El Jadida delighted us with an excellent weather, a tiny Medina and cistern of Portuguese heritage which were a real pleasure to discover on foot, a wall from which to glimpse everything, an adjacent beach we had no time to enjoy but to which we will return, a few seafood restaurants that have little to envy to those we are used to in Galicia; and above all, a fishing port that at sunset is a real wonder. 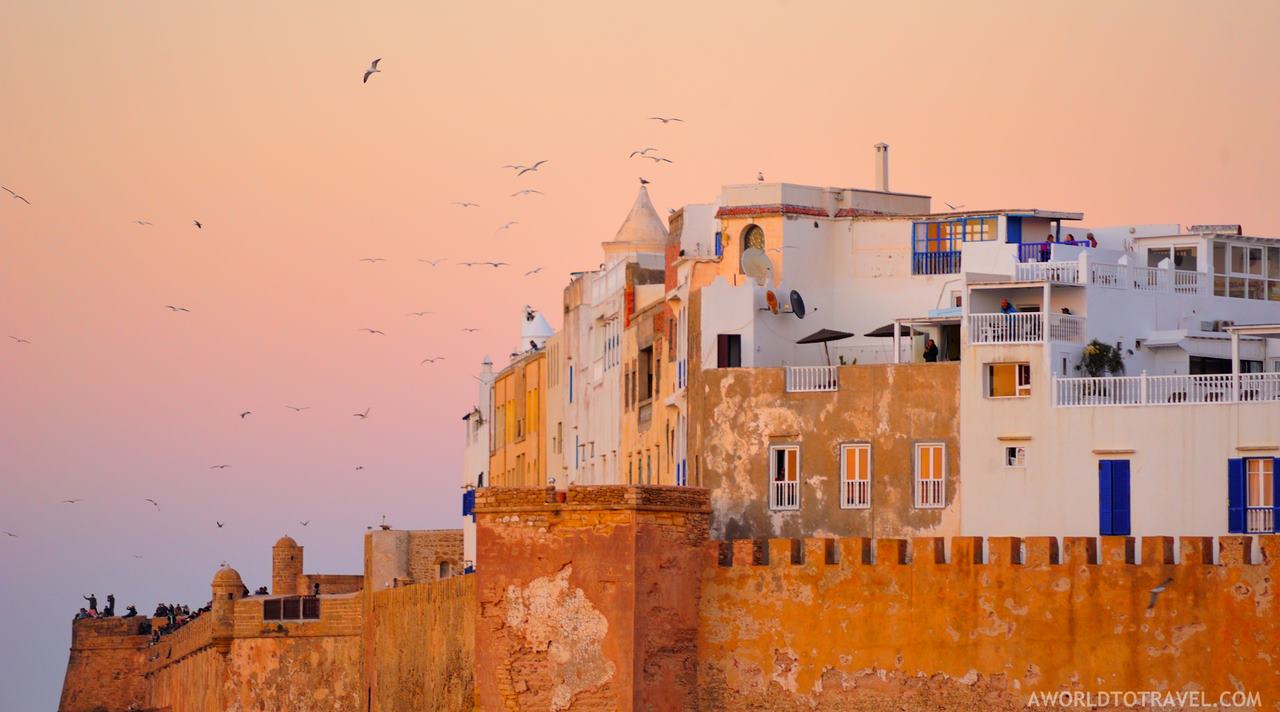 Mr. Jimmy Hendrix made sure to put this fishermen village in the map in the Summer of 1969 when he visited Essaouira just a year before his demise. Whether this 11-day trip was key to his latest work or not, we don’t know. What is clear is that the city is very fond of him. Or, at least, wants to continue earning money at his expense.

From the record stores, blasting his records from early morning until well past dawn; to the many galleries that populate this town with psychedelic artwork hanging on their walls, his presence fifty years later is undeniable.

As if that was not enough, Game of Thrones did the rest when it included the ramparts of its 18th-century fortress and Medina – formerly Mogador and included by Unesco on their World Heritage List – in its fourth episode of the third season.

Refurbished riads, argan oil cooperatives, women making peanut butter on the spot, and a pretty tidy Medina full of shops and restaurants where tourists weren’t assaulted or grabbed – as it happens in Marrakesh – completed the scene.

Outside the city walls, Tagharte beach, the always busy port and the Petite Île d’Essaouira (Essaouira’s Small Island) will also keep you busy camera in hand. 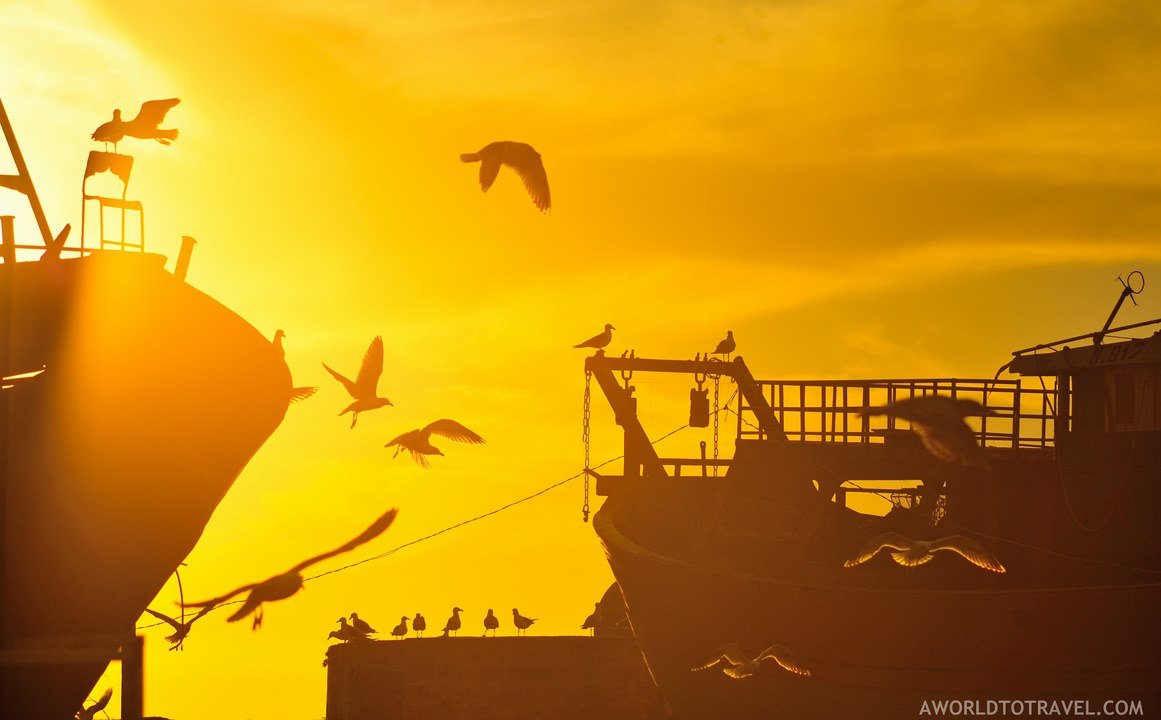 So much that if you want to spend a couple of days in any of these destinations, this town could be a safe choice to do so. 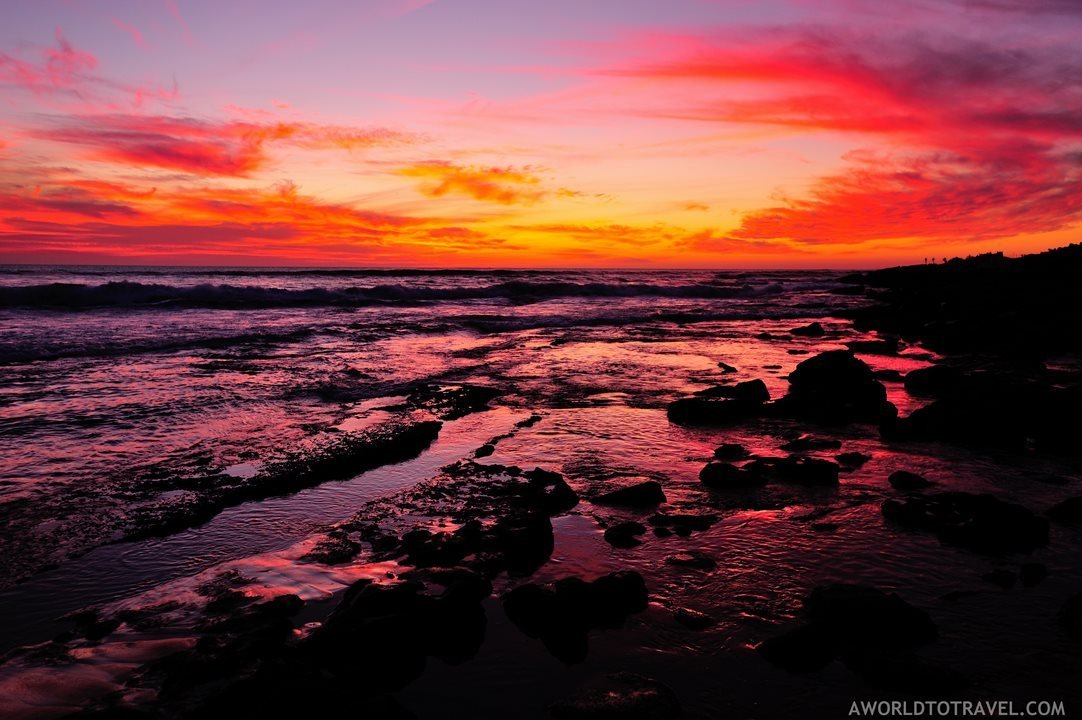 An inherent hippie vibe, tons of surf camps running all year-long, fresh seafood, and some of the best Morocco beaches bathed by the Atlantic ocean await sun-worshippers in Taghazout.

Keep in mind the incredible power of attraction – almost like a magnet – that this town and its magnificent coastline will exert on you. We already have plans to return and we are not the only ones. During our short time there, we met several seasonal workers who had been living and working in Taghazout for some time, as well as some tourists who were on their third and fourth Taghazout bounds.

It is one of the points of this route where perhaps English overwhelms the ubiquitous French, and where getting a beer got more difficult – if not almost impossible. Do not despair, though, the nearby Agadir’s malls will meet your needs on arrival.

Some people will argue that the best beaches in Morocco can also be found in Agadir. The reality is that this city is just a short ride away from Morocco’s surf capital – Taghazout – and it is difficult to say when or where Taghazout beaches end. Let’s just say the Southern part of this Morocco itinerary is the one with some of the most stunning spots in the Atlantic coast and the Northern part is the one containing the best cities to visit in Morocco’s coastline (Rabat and Casablanca).

Other than that, Agadir is pretty much a resort-filled city. Not our favorite, yet great for a sunset stroll along its km long beach. 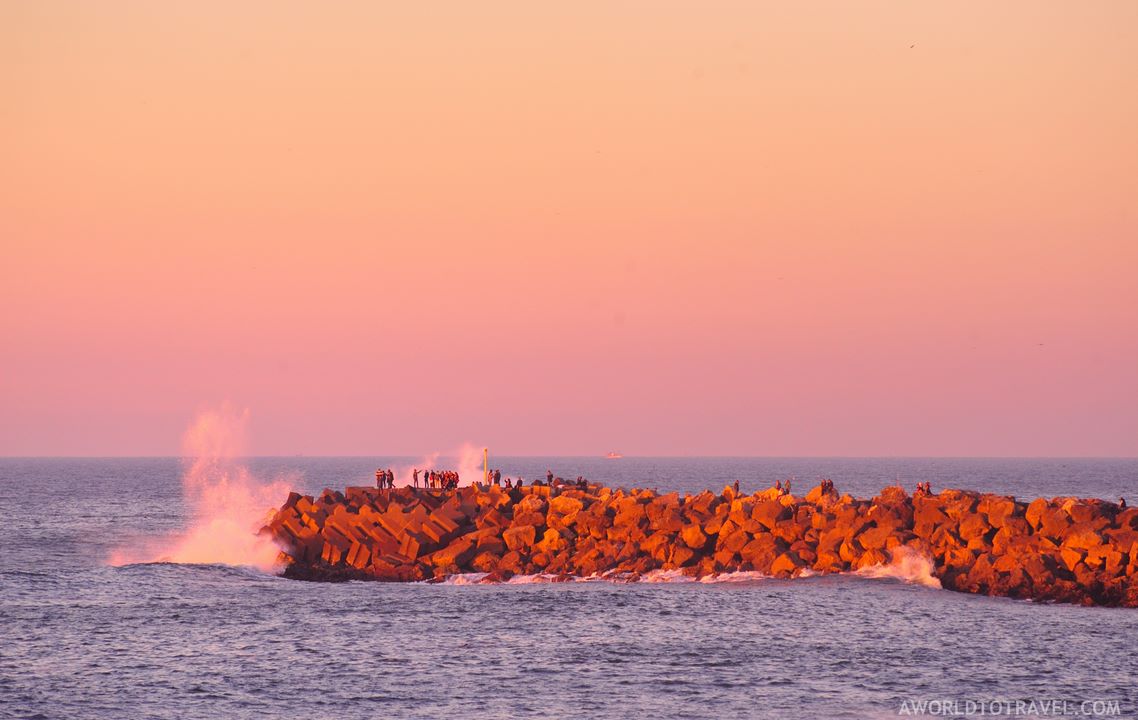 Having been three times in the last 10 years (during Spring, Fall, and Winter), I can safely say that weather during these three seasons was more than bearable, if not outstanding.

Summer can get too hot in Morocco, but as this country has a huge variety of landscapes and climates (inland deserts, coastal spots along the Atlantic Ocean, 4000-meter mountains in the High Atlas, and more) there’s always a region within this destination enjoying the perfect conditions.

Other than that, if you care, figure out when exactly Ramadan is taking place and act accordingly. Many restaurants close during that period and it is disrespectful to eat or drink in public between sunrise and sunset as Muslims observe fasting.

How cheap it really is to road trip the Moroccan coast 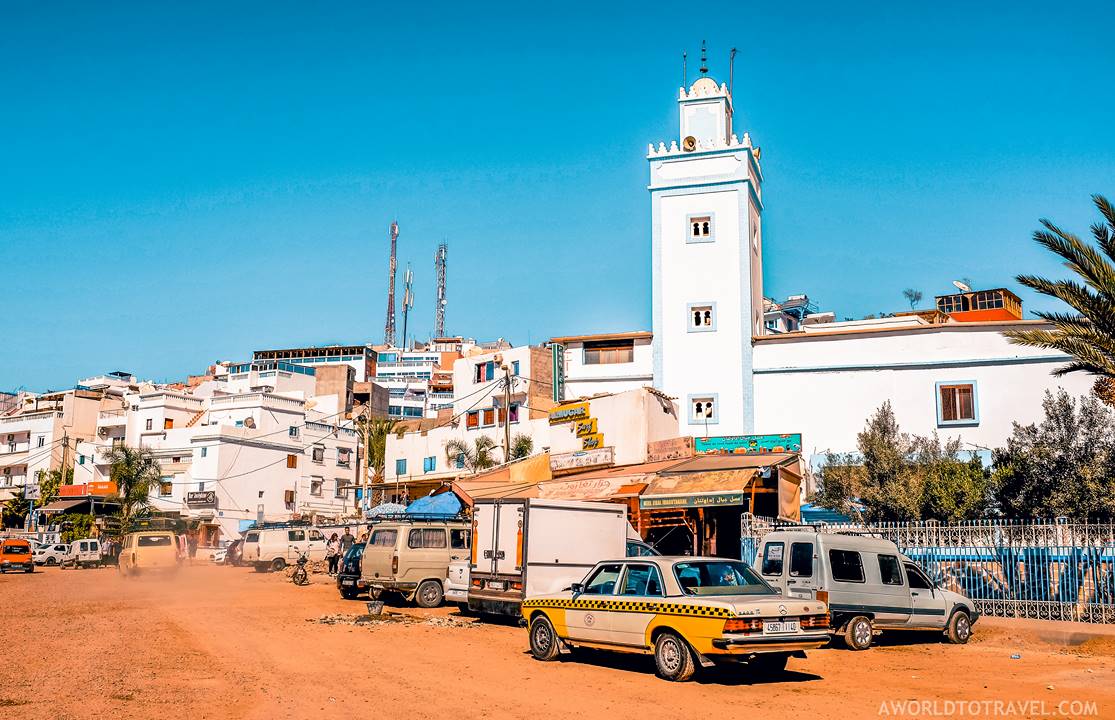 Sorry to disappoint anyone thinking you can do this on a shoestring budget or SE Asia standards.

If once Morocco was cheap AF, those times are long gone. Especially if you stick to the most touristy paths and cities portrayed here. Because no one wants to risk a holiday due to stomach issues, the reality is that most of the restaurants will set you around 100dh for a meal, 50dh for a pizza, 15dh for a freshly squeezed orange juice and 10dh for a mint tea or black coffee (prices two or three times more expensive than those paid by the locals).

Ensuite double rooms can be found from 250dh and, as a rule of thumb, public transports will cost around 20dh per hour in a bus and 40dh per hour in trains (gas is 8dh a liter).

Then, if you jump on the beer wagon, expect to pay anything from 15dh for a Flag Special (25cl) in a local populated bar (no women in sight) to 45dh in a club. And a modest bottle of wine should be between 100 and 250dh. Smoking inside bars and clubs is mainly allowed, so you’ll get back home reeking of tobacco.

As a side note, flights bought a mere week before our departure in the middle of the Xmas and NY frenzy, were 230€ per person (OPO-CMN, AGA-FEZ, CMN-OPO) with Royal Air Maroc and Air Arabia.

So it is safe to say this one was a pretty budget trip and an excellent option to spend Christmas and New Year in a warm destination a short flight away from Southern Europe.

What takes us to… 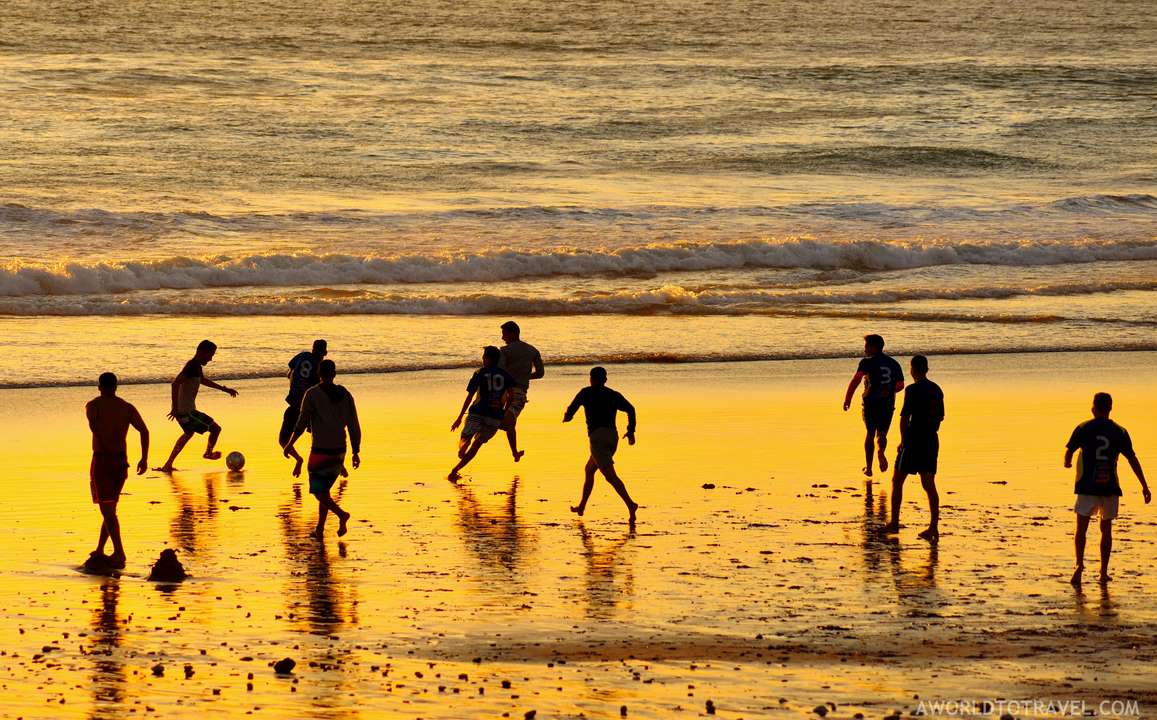 Being a Muslim country, Morocco is a more than acceptable option to spend Christmas and the New Year if these dates do not have a great significance to you.

On the other hand, if you need to see trees loaded with lights, walk through themed street markets and drink mülled wine; do not even think about this destination at Christmas. This country could not care less about these dates.

We decided to give Essaouira a try for NYE. Giving how touristy it is, we thought it wouldn’t be that difficult to find a spot with a proper countdown and party to welcome the new year. And so we ended up paying 150dh each right before midnight to get access to the only club – meaning alcohol was served – in town throwing a fête de fin d’année. We were also thrown out of that same spot less than three hours later. Why that happened is beyond the point now. But we’ll be happy to tell you this story some other time. 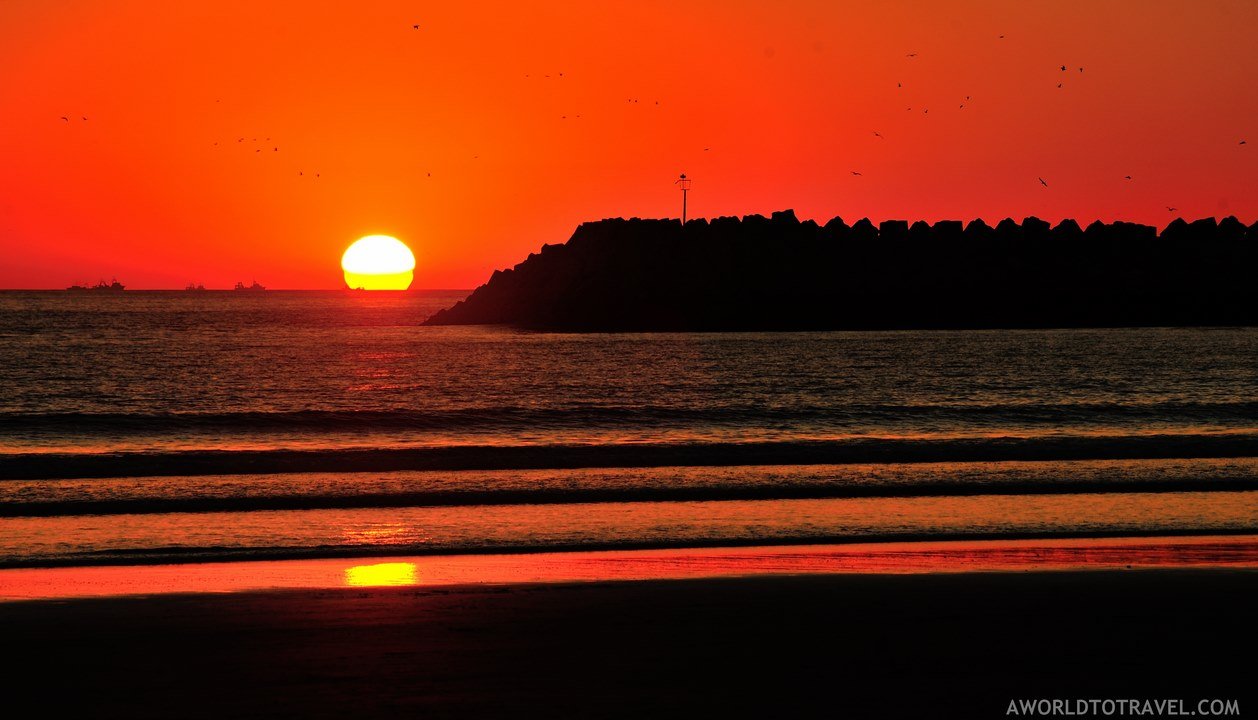 What was going to be a simple article about how to visit six wonderful points of the Moroccan Atlantic coast, is becoming something very different. My bad.

And the fact is that, after the last truth, there is a subject I consider it necessary to speak about without further delay: The case of this country and the female travelers.

Perfectly accepted that a woman travels alone, according to which areas and situations she might find herself in, this same woman may be disturbingly affected by a different culture to which she is used to.

Some people consider that women who have not covered their head and the rest of their body (except their hands), lack self-respect. And therefore, they are not respected the same as the rest.

Part of the aforementioned issue with the club on Dec 31st came as a result of this. Even when my outfit was the most modest I wore on such a marked date ever, it seems that it wasn’t enough.

Apart from that, we went through other unreal situations, such as when we were addressed in French. Being the only one able to answer in that language, I’d do so. Yet, my words were many times overheard, resulting in the person talking to us asking over and over the same to the male part. Such a waste of time and patience, I swear!

Simply put, sometimes it pays off to cover yourself and keep your mouth shut. The more you do it, the fewer issues you will have. 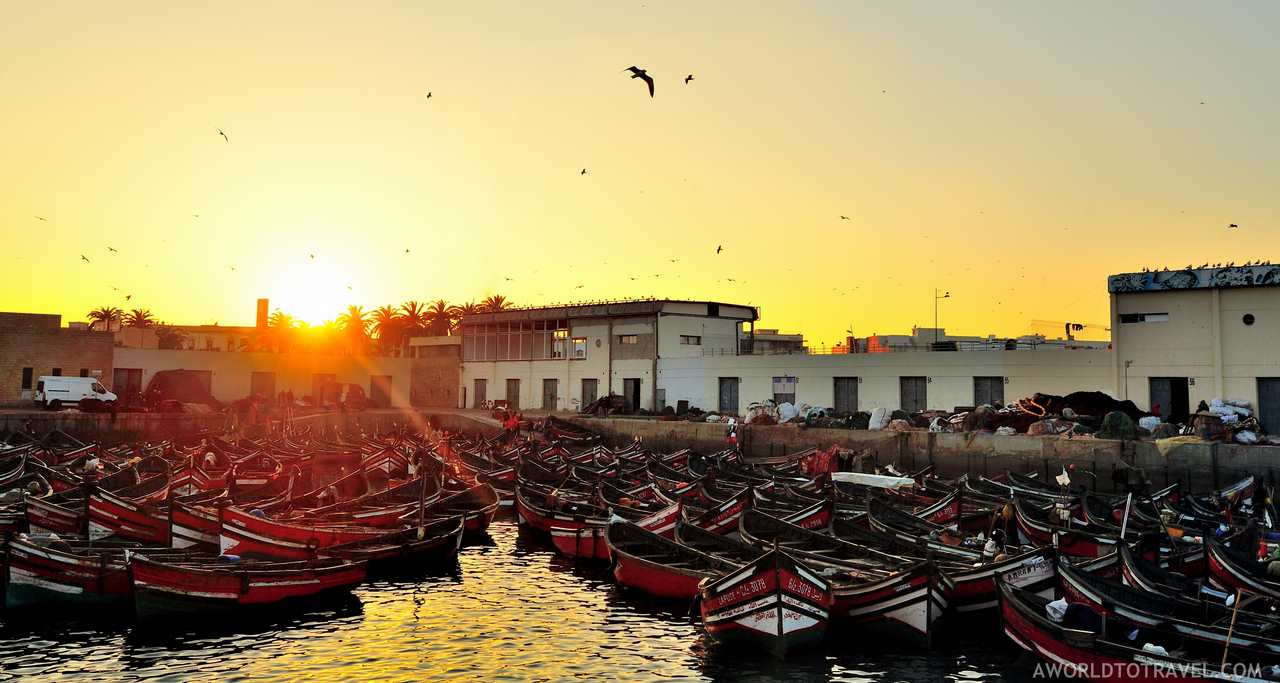 One week in Morocco, whether you spend it road tripping the Atlantic coastline from Agadir to Rabat, exploring Marrakesh and the desert or touring the Northern cities (our next adventure) is not much, yet enough to disconnect and explore a very different culture next to Europe.

In any case, we hope you enjoyed this 7-day itinerary through some of the Moroccan Atlantic ocean gems. Looking forward to your feedback, keep awesome and have an amazing 2019 full of health, travel, and love!