There is one city in South America that I consider as a prime gem of colonial architecture: Olinda, Brazil’s most colorful town. This Olinda travel guide will help you make the most out of your visit.

A brief history of Olinda

Some tribes used to live in the area way before the Europeans arrived in South America, but Olinda became officially a settlement only in 1535. For centuries it grew thanks to the production of sugar cultivated by slaves imported in terrible conditions from the coast of West Africa.

In 1637 the town was conquered by the Dutch, who controlled it for three years. After it was freed, Olinda started losing importance in favor of Recife that soon became one of the main commercial ports of northeastern Brasil.

In the last decades Olinda, four-hundred thousand inhabitants, has been essentially incorporated into Recife, which counts four million people.

Why should you visit Olinda? 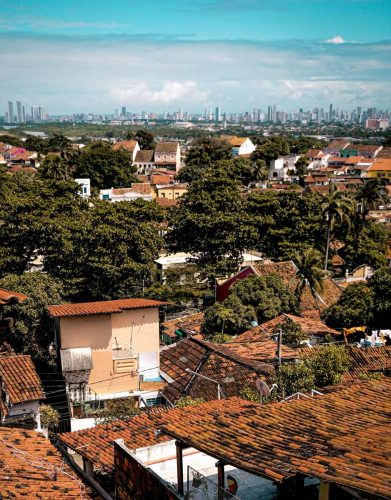 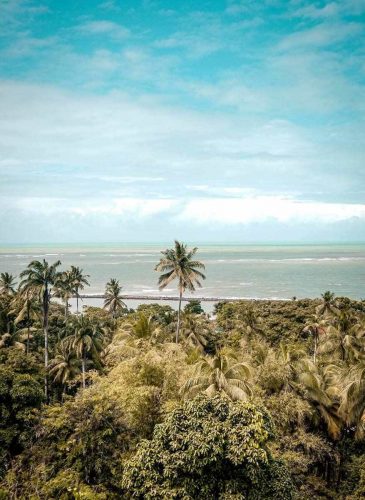 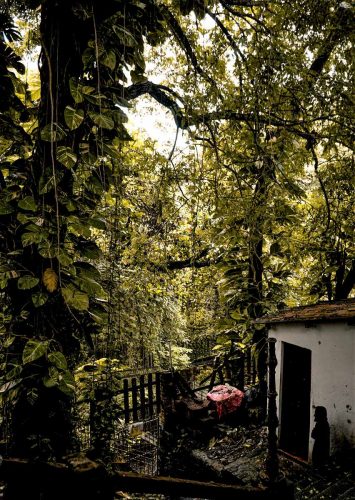 The atmosphere here is much quieter than in noisy Recife, it almost sounds like you are in the countryside.

This is especially true in the city center, with all its artists’ ateliers that will transmit to you their relaxed vibe.

There is also another reason why I would prefer Olinda over Recife: while the latter is one of the most dangerous cities in Brazil in certain areas, the northern neighbor is very safe and you can freely walk everywhere.

Walking on the little paved streets is your must-do activity in Olinda. And if you are a fan of colonial architecture, you are in heaven. Its city center can be visited in a morning, covering all the neighborhoods around the Alter do Sé hill, its most famous area.

Its top is where most of the social life of Olinda happens. All its dwellers join their friends and families there in the evening to eat tapioca accompanied by a beer or a caipirinha, observing the sun setting behind Recife and painting Olinda of intense red color.

The town has probably the highest amount of churches per inhabitant in all Brazil. Wherever you look at, you will see beautiful Christian temples. The diocese of Olinda is in fact one of the most important of the country since it was created in 1676.

The most famous church is also the first one that you will see upon arrival: the Igreja do Carmo, recently renewed, overlooks the square with the same name which serves as a stop of the Onibus Recife-Olinda and Blablacar drivers.

Olinda and Recife have a strong rivalry on who has the best Carnival. If this is a very hot topic in Brasil in general, you can imagine when two of the four best celebrations happen so close to each other. The two other must-see Carnivals are Rio de Janeiro, of course, and Salvador de Bahía.

Olinda’s Carnival celebrations last six days. During almost a week the city center becomes the focus of the lives of all the citizens. Hundreds of people parade in the streets together with big carnival puppets.

The most famous is the procession of the Virgins of Bairro Novo that takes place the Sunday before Carnival. It showcases more than four hundred men disguised as women, followed by almost a million people, an incredible amount of people for such a small town.

As it happens in the whole of Brazil, the weeks leading to Carnival are the most animated. If you are in Olinda in that period, be ready to pay higher prices and book as much in advance as possible, as everything is sold-out, including private houses that are rented to tourists.

If you like art, Olinda is your go-to place in Brazil. There is at least a dozen atelier of painters and sculptors. If you have space in your luggage, a painting is a great souvenir.

I suggest you choose one at the shop of Estação Café, I still regret having no space in my backpack!

How to visit Olinda

Olinda is often wrongly out of many itineraries in the northeast of the country. This stupid (to me) decision comes for the proximity of the most famous neighbor of Olinda: Recife, where most of the people stay on their trips to the region or to the archipelago of Fernando de Noronha.

Situated only six kilometers north of Recife, Olinda is often visited only as part of a city tour from the metropolis.

It is still something, but not enough.

The city center deserves a bit more than a few hours. The relaxed vibe very well matches the paved streets with houses of many bright colors. And evenings on the main square are a must-do. It is no surprise that its beauty made it a UNESCO World Heritage Site since 1982. 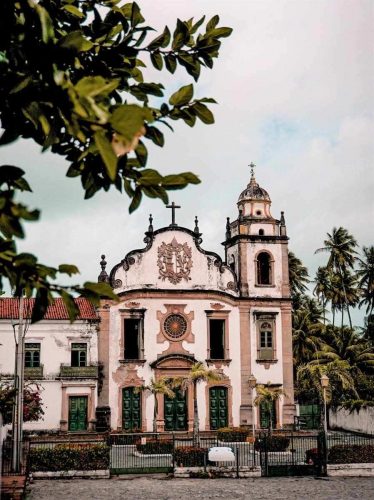 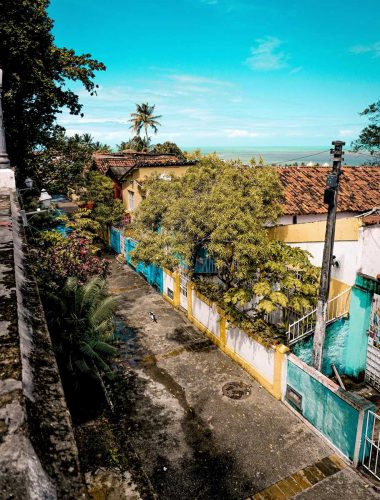 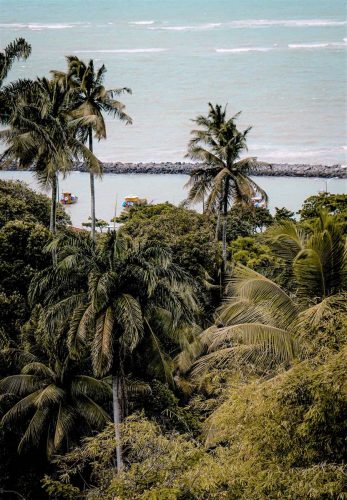 Where to eat in Olinda

There is another thing that abounds in Olinda: restaurants of good quality. It is no surprise that the most famous, Oficina do Sabor, is also considered one of the best of the whole north-east of Brazil. Local ingredients are used to create exquisite elaborated recipes. Try the baked pumpkin filled with shrimps in maracuja sauce, accompanied by squid rice and coconut sauce.

Another reference in town is Beijupira, a chain with restaurants in other towns of the region, as in touristic Porto de Galinhas two hours south of Recife. The Beijuamanga, fish in crust with mango sauce, is one of the signature dishes of this extremely romantic restaurant.

If you are after something quick and easy, try Creperia, a place for small salads and crêpes in front of an inevitable church.

Another good place for a snack is the Estação Café in Rua Prudente de Morais, which serves sandwiches and tasty local dishes.

Where to sleep in Olinda

I suggest you go to my favorite accommodation in Olinda: hotel Morada Bonfim, a gorgeous yellow colonial house very well kept by the owner Dalton and Marilia, two of the kindest Brazilians that I met in my two-months trip in the country.

You can choose between the suite or the two double rooms with shared bathroom: all the three are well-finished and clean.

Marilia’s breakfast is the perfect start of your day: tapioca, eggs, cakes, fruits, and fresh juices, nothing is below excellency in this pousada.

If you are planning a trip to northeastern Brazil, do not miss Olinda!

The author of this article is Mario, a humanitarian and traveler. He writes about his job and trips on his blog. If you can read Italian, visit his site www.restandrecuperation.it. 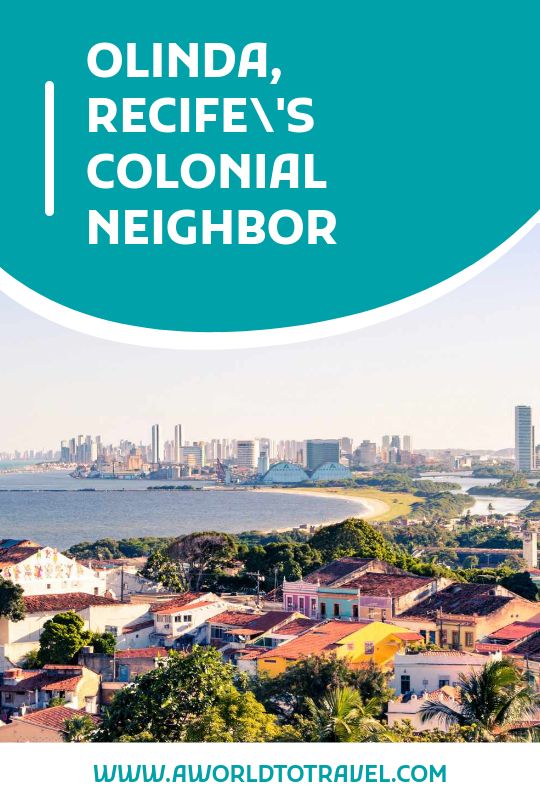