You probably have already heard of Sardinia and, most likely, this foot-shaped island floating in the Mediterranean was pictured as a glamourous and expensive destination.

This is true, but only in a small spot on the North-East side called Costa Smeralda. In spite of being surrounded by amazing coast sceneries, here you will find no real towns and almost no local people, but only artificial holiday villages made alive by wealthy international tourists not more than four months per year.

But fear not, we have compiled this North-West Sardinia guide for you to bring you all what’s worth to see, do and eat there. Enjoy!

1. ALGHERO, THE SOUL OF NORTH-WEST SARDINIA

If your curiosity made you search deeper instead of turning your holiday radar to other destinations, you should have read about Alghero. This charming coastal town on the North-West coast is a historical – and quite popular – destination in Sardinia, but surely less glamorous, economically affordable, alive almost all year round, and full of local people.

Well, to be sincere it is a very special kind of local people, since their roots are not in Sardinia or in Italy but in Catalunya, between Barcelona and Balearic Islands where the local language comes from. 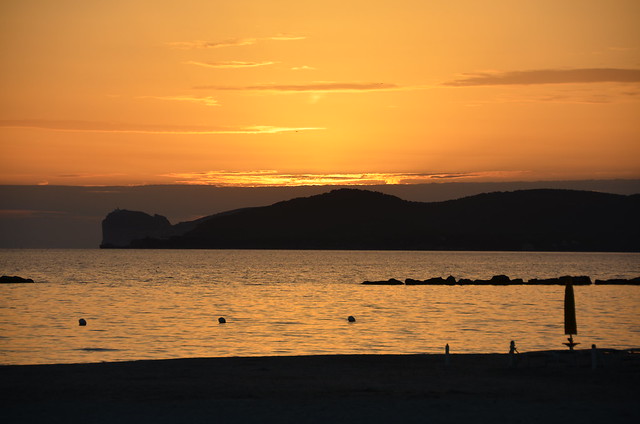 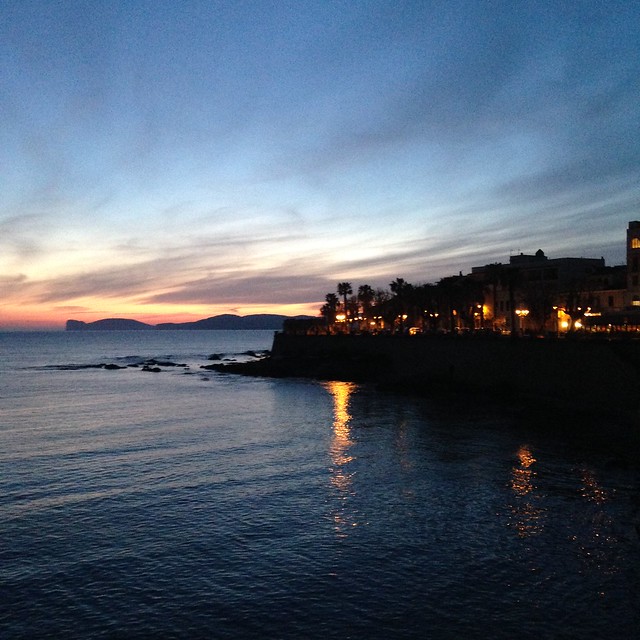 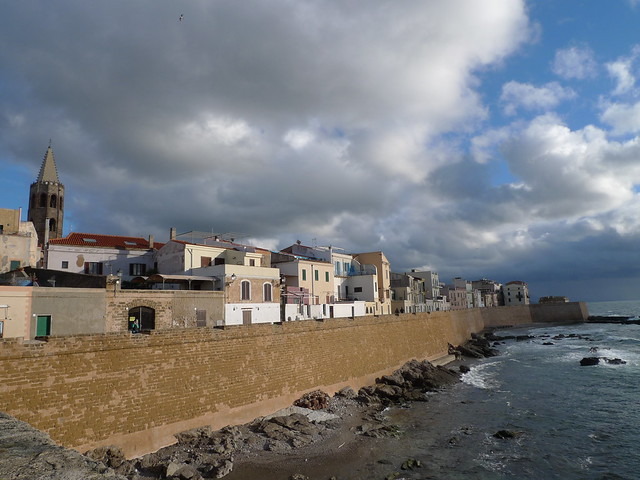 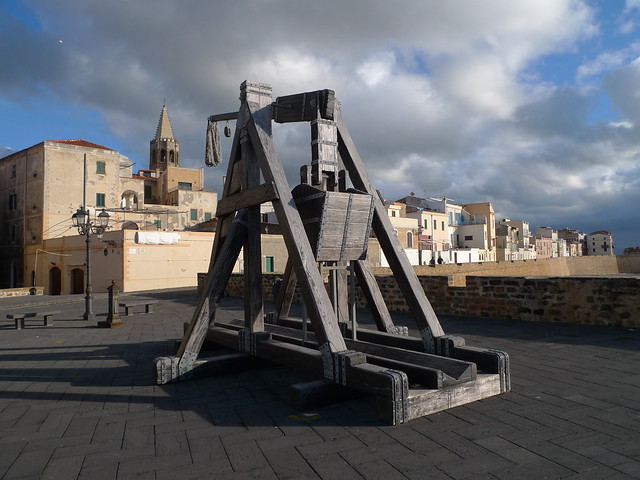 You may say that “popular” in Italy often equals crowded and not pleasant. And this is again true, but only for around five weeks per year between July and August. In the rest of the year reasons to go there are various, interesting, and able to tickle the senses of many curious travelers.

Let’s start by erasing any concern about the sceneries and natural environment, simply because this area offers a crazy variety of massive cliffs, charming bays with secluded sandy coves, and idyllic coastal landscapes matched with an incredibly rich wildlife. Some examples? Wild Sardinian horses and albino donkeys (both indigenous species of Sardinia), wild boars, deers, foxes; if you also like to stare at the sky with some magnifying tools, you may admire griffon vultures, peregrine falcons, buzzards, henrons, flamingos, and of course lots of seagulls. Marine life lovers can enjoy playful dolphins, lobsters, turtles, octopuses, sea horses as well as ‘pinna nobilis’ one of the largest known species of mussel.

Need some names? Porto Conte natural reserve surrounding massive Capo Caccia and Asinara island National Park are the areas where to feed your hunger of nature. The first is on the outskirts of Alghero, while the second lays at the north-west edge of Sardinia. 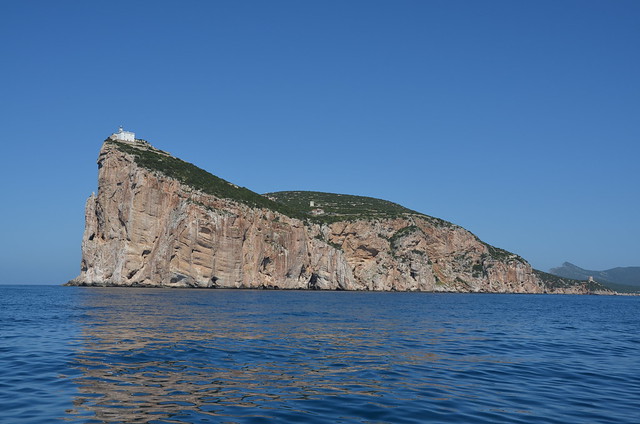 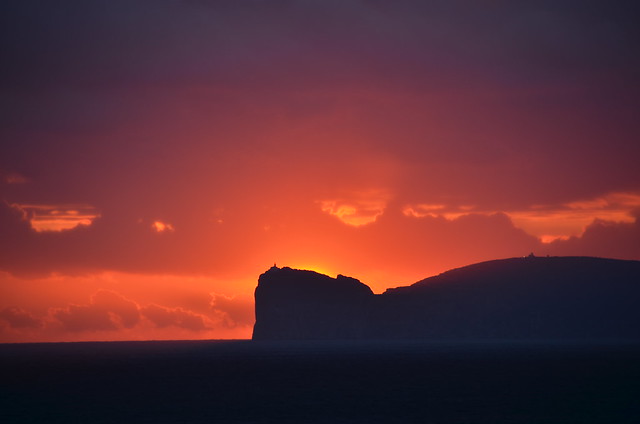 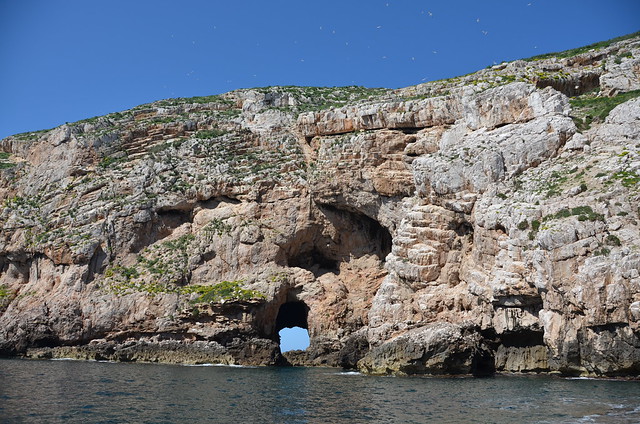 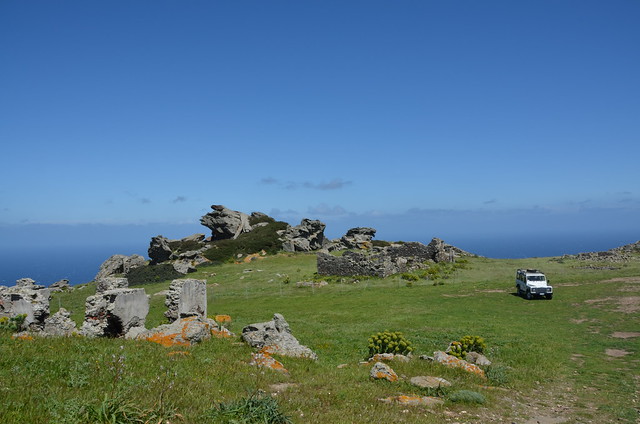 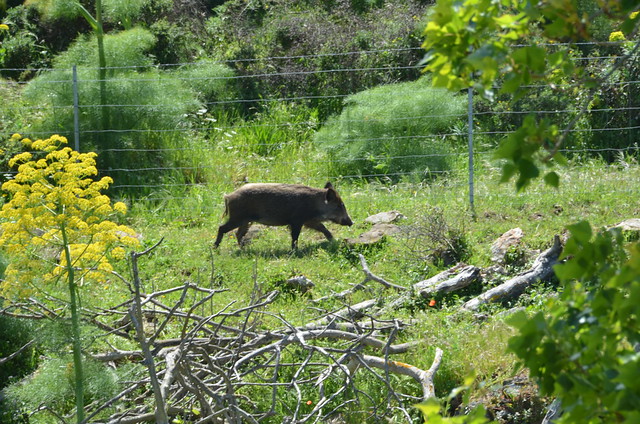 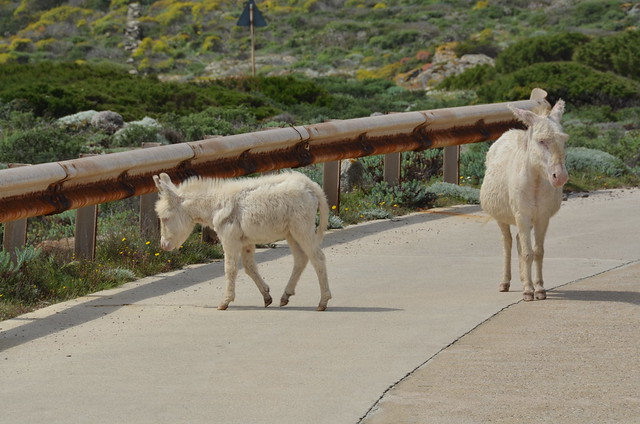 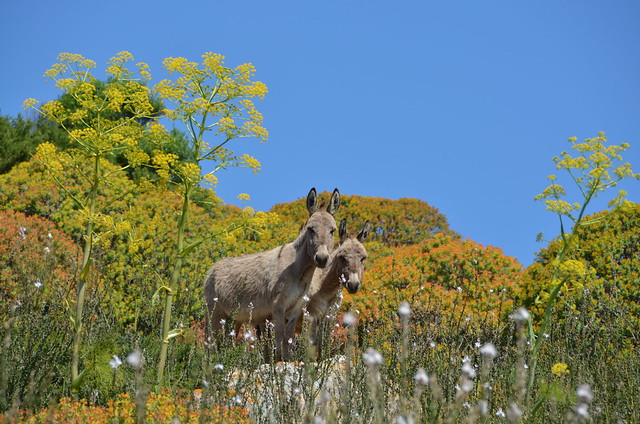 We’d like to carry on with surprises, so let us tell you about the oldest archaeological site in the Mediterranean: Monte d’Accoddi. It’s a prehistorical altar dated back to 4th-millennium b.C. whose structure is similar to Ziqqurat in Mesopotamian valley.

This 6000 years old marvel is about 35 km north of Alghero. If your archaeological soul is not fully satisfied by this unique and mystical place, you may keep strolling in Alghero outskirts and visit Anghelu Ruju necropolis, with its underground rooms built during the neolithic age as well as Palmavera, a prehistorical Nuragic village built 15 centuries b.C.

By the way, we were simply impressed to know that in recent years archaeologists have named and pointed on Sardinian territory over 7000 prehistorical sites between nuraghi (mysterious stone-made towers), dolmens, altars, necropolis, sacred wells, and springs; this unbelievable heritage makes this island a unique – and probably the largest – open-air archaeological museum in the world. 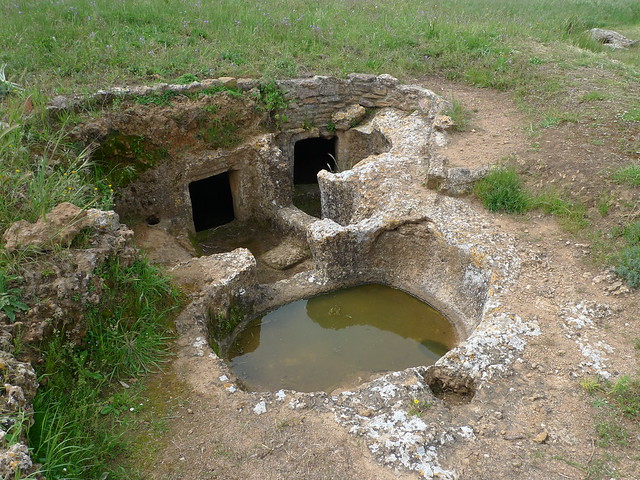 And what about sports? Trekking, climbing, kayaking, kite surfing, horse riding, and of course swimming and diving are easily accessible to active-minded fellows who wish to keep body and soul in good shape.

Since we’re writing about Italy, we’re sure that many of you are already mouth-watering even before getting to the foodie side of this post… so here it is!

Being an island, you may expect a cooking tradition focused on seafood but actually Sardinian food tradition is mainly linked to meat; but – as they said – in Alghero, there are Catalan roots, so the situation gets more and more mixed up… as often happens in Italy. Let us make it quick by listing the plates you should definitely try. Of course we missed many but, you know, this is Italy and none of us can live long enough to try all its specialties; and we believe it’s important (and interesting, and funny) to have room in your stomach for food exercises performed all around the world!

Our favorite Sardinian eats are pecorino (cured cheese) and ricotta (fresh cheese), both made by sheep milk; ricotta is often turned into a delicious dessert when dressed with honey, cinnamon, and crushed almonds.

Fregola (tiny pasta balls, traditionally made in Sardinia) with clams, it’s similar to a soup but a bit drier and it’s simply unbelievable how these balls can absorb the flavor of the Mediterranean sea.

Pork grilled on the open fire: a slice of simple, smokey, fatty, and soft meat. Seadas which is a kind of large raviolo stuffed with fresh cheese, it is fried and dressed either with honey or sugar.

If you love sweets and colors, you’ll just be amazed by the artistic Sardinian sweets you can find almost everywhere on the island, some of them are a real artwork and it’s not so easy to break it with your teeth.

And we can’t forget pizza. The best is usually cooked in a wood oven and as you know it’s available everywhere in Italy; the Sardinian version, together with the base of tomato sauce and mozzarella, is literally covered by fresh sausage, onion, and olives.

Finally, wine is surely another important piece of Sardinia where you can find an excellent niche production from indigenous grapes; most common are surely Vermentino (white) and Cannonau (red). Both usually have a pretty high alcohol proof starting from 13/13,5° getting up to 15/16°.

Last – but definitely not least – get inspired by Bosa, another lovely town about 40 km south of Alghero. The colorful soul of this sleepy town is absolutely magic, just like its bizarre urban structure on a steep hill towered by a medieval fortress on the shores of Temo river (the only navigable in Sardinia). 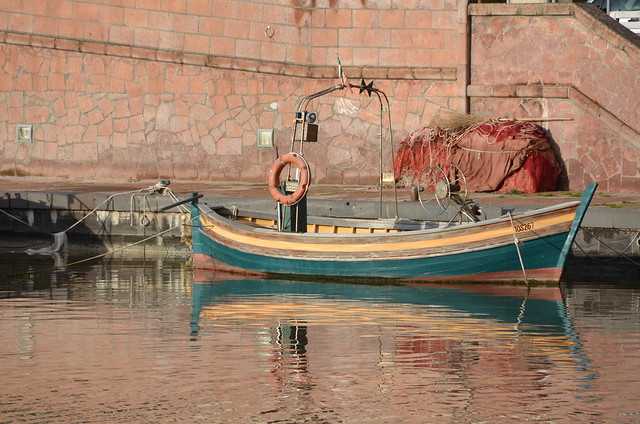 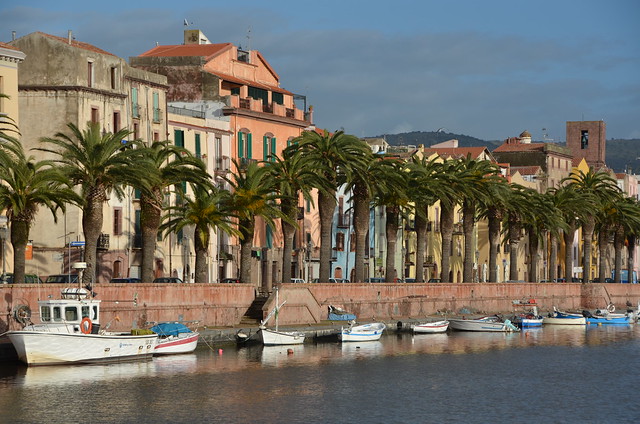 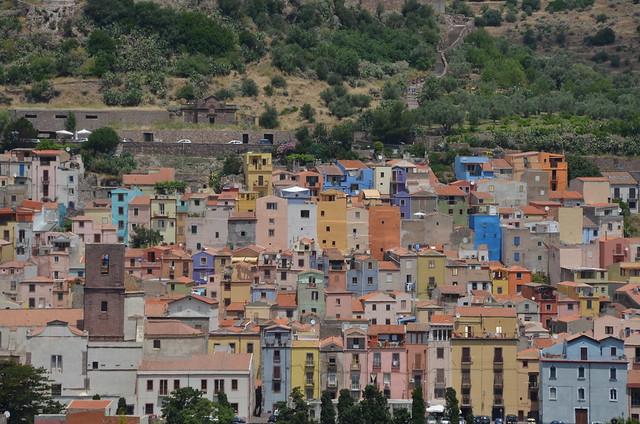 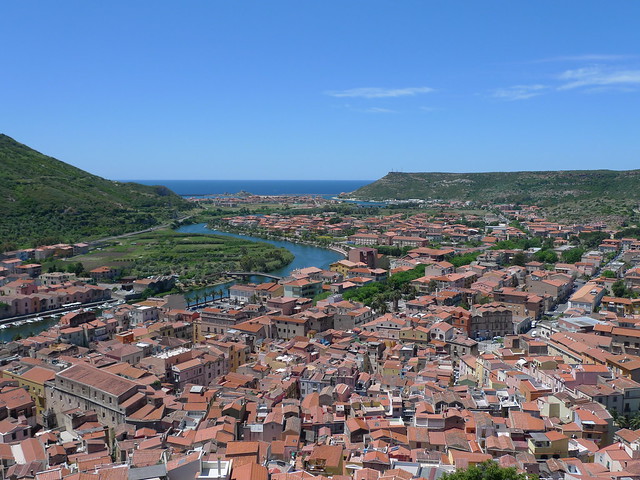 7. WHERE TO STAY IN NORTH-WEST SARDINIA

Check out this selection made by the fellows who really know the island and who offer really authentic experiences in Alghero as well as in the rest of Sardinia.

There’s something for every pocket and taste, so we feel it’s a fairly good list!

Bear in mind that the island is fairly big (around 250 km north/south and around 150 km in width), so forget to visit it on a weekend. Here’s a great Sardinia 10-day itinerary if a road trip is on your plans.

Avoid July and August when the coast is overcrowded by an army of suntan junkies.

That’s the only way to be fully independent and to reach the most sensational spots. Public transportation (mainly buses and trains) works between the main cities but does not cover the whole territory.

Many of the most beautiful sites in this area as well as in the rest of Sardinia cannot be easily found. If you wish to fully appreciate the soul of the island made of breathtaking sceneries and smiley people I would recommend experiencing it with local fellows above all if your holiday is limited to a few days.

Like, for instance, Gaveena – Your Mate in Sardinia which is a young tour organizer based in Sassari offering a wide range of travel experiences all around Sardinia; friendly local fellows take you on a journey full of surprises, good flavors, and intense Mediterranean scents.

They also have an interesting blog with lots of information, curiosities, and funny stuff: gaveena.com/blog