How Social-Media-Crazed Tourism Is Destroying Bali

The author examines the negative effects of social media on tourism after visiting one of the most famous and Instagram-driven islands of Indonesia, Bali.

I arrive at Ngurah Rai Airport—Bali, Indonesia—with raring excitement having long-awaited the much-needed escape from the monotony of civilized routine. The bags come down the conveyor beat and rundown, much like their owners, many of whom have traveled for nearly a day or more, including me, in the hopes of tasting paradise before being sucked back into the Western machine.

Grabbing my backpack from the carrousel, I meander the winding passage past clueless tourists queuing at jacked-up ATMs. Birthed to an open lobby, sweat instantly begins dripping from my pores as the muggy night seeps in. Taxi drivers bustle about with their various ploys to grab my attention—a quick bit of bartering shows them I’m not the usual sucker who’s more than happy to fork over $40 as if hailing a cab outside JFK or YVR. 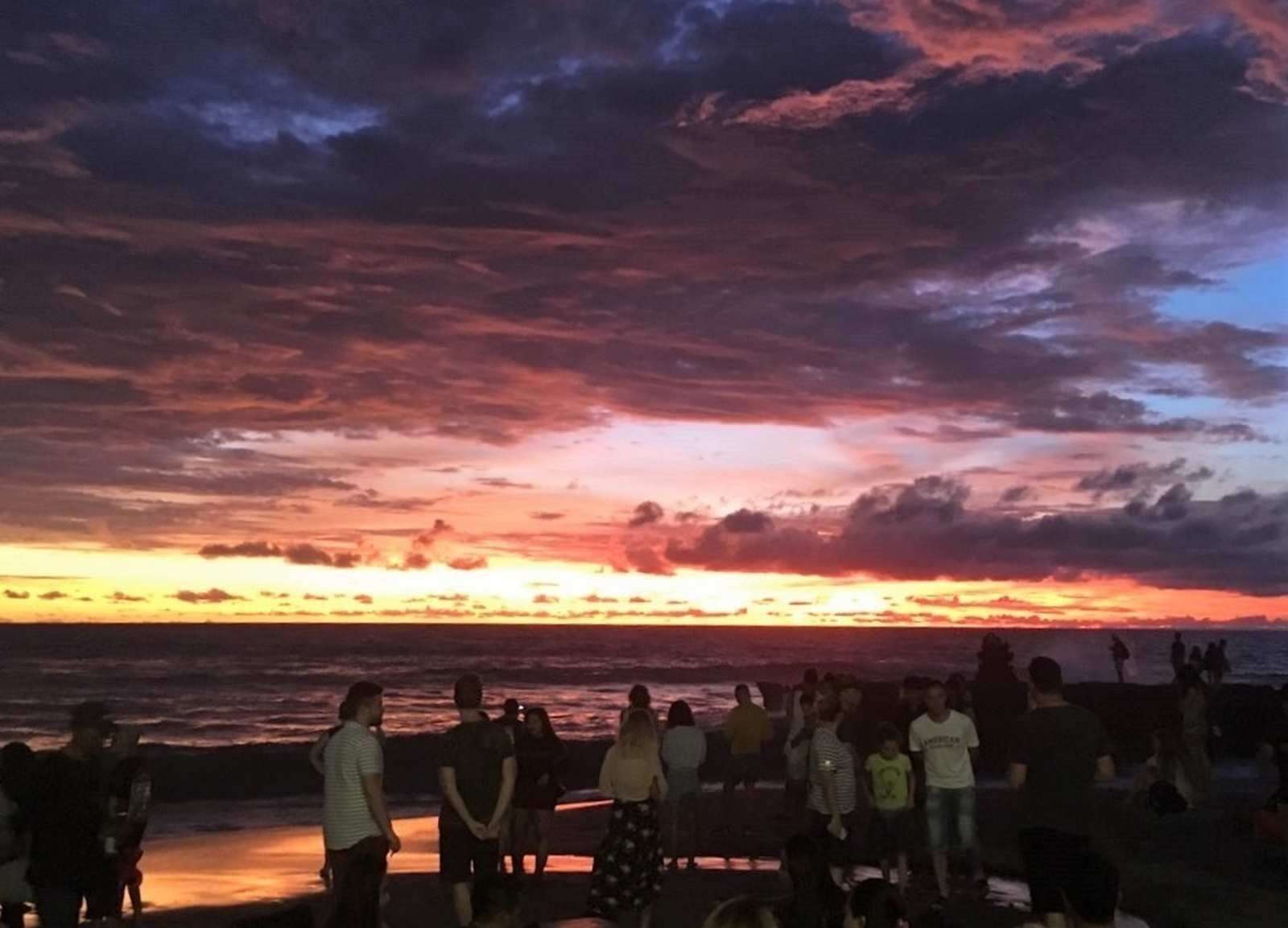 Still getting ripped off I’m sure, a price is finally settled. I gaze out the open passenger window, puffing a cinnamon-flavored cigarette offered to me by the driver. Aside from stray dogs wandering the sidewalks and late-night card games in half-closed hole in the walls, the dead darkness of night enshroud Bali’s many secrets on the way to my hotel. 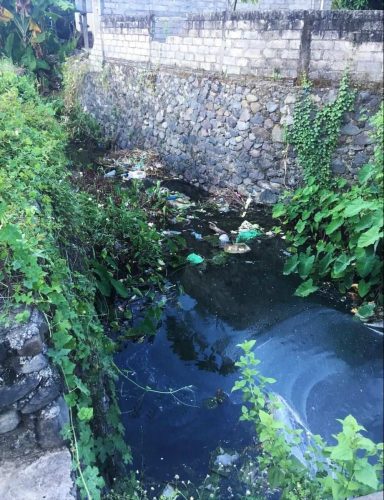 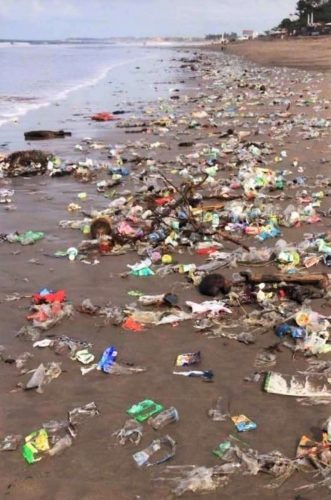 Indeed there are many secrets to this acclaimed archipelago, well kept for a reason. The next several months of travel revealed this to be so—but the secluded coves and hidden gems of many a distant island are hardly the secrets worth talking about on this particular patch of Indonesian dirt and rock. Rather, Bali’s enigmatic nature serves as a penetrating allegory into the dark reality that is this ignominious island.

When one thinks of Bali, a tropical haven probably comes to mind, abound with turquoise waters, pristine beaches, lush jungle, and authentic island culture. That, however, is just what’s seen on the proverbial postcard. Once peeling back the veneer, the image being sold becomes a water-stained mess, smudged with deceit and distortion, as the cold hard truth of environmental and cultural decimation is painfully exposed.

Bali is not as much a destination but a real-world meme, a geo-tag for your filtered Instagram post. In frame, sun-kissed models shimmer in the reflectance of tumbling waves, while just out of view piles of plastic trash wash ashore as inland sewage runs across the beach into the sea, ignorant tourists washing the sand from their feet in the festering, disease-ridden streams.

The very air itself has become a smoggy filter, glossing my skin as I walk up the street, pollutants, and particulates stinging my bewildered eyes. Endless motorbikes, cars, and trucks piss out CO2 emissions through unregulated exhausts while local bug-zappers spray toxic mist along streets lined with tropical greenery and fire pits packed with litter for nightly burns—the scene is that of utter disregard for the health, common sense and modern practice.

Read more: How To Reduce Your Carbon Footprint When Traveling

Granted Eastern customs differ from those dictated by North American policy, knowing this firsthand having backpacked all through Southeast Asia in my college years, but nowhere in my travels was there such blatant disdain for natural preservation. Sure the trucks and buses cruising the coastal highway of Vietnam puff out black fumes and the current of Thailand’s Chao Phraya River carries with it bloated canine corpses and foul-smelling garbage that linger in Bangkok’s swelter. And, yes, nearly all of Asia burns their refuse, passers-by breathing in the cancer-causing dioxins as the smoke billows aimlessly into the clouds.

But once stepping away from the industrious hotbeds of these developing countries and into the seaside cities, beach towns, and jungle villages, what one encounters is relative splendor in its natural form. Still a masquerade in many ways given the myriad environmental woes unaddressed—the beer bottles, Red Bull cans, plastic buckets, straws, and forgotten flip-flops that line Haad Rin Beach after every full moon party come to mind. In Bali, though, the facade only exists to fend off scrupulous eyes from afar. For the magnitude of spoliation and environmental neglect is beyond that of any tactic to divert or obscure onlooking glares by those duped into coming. 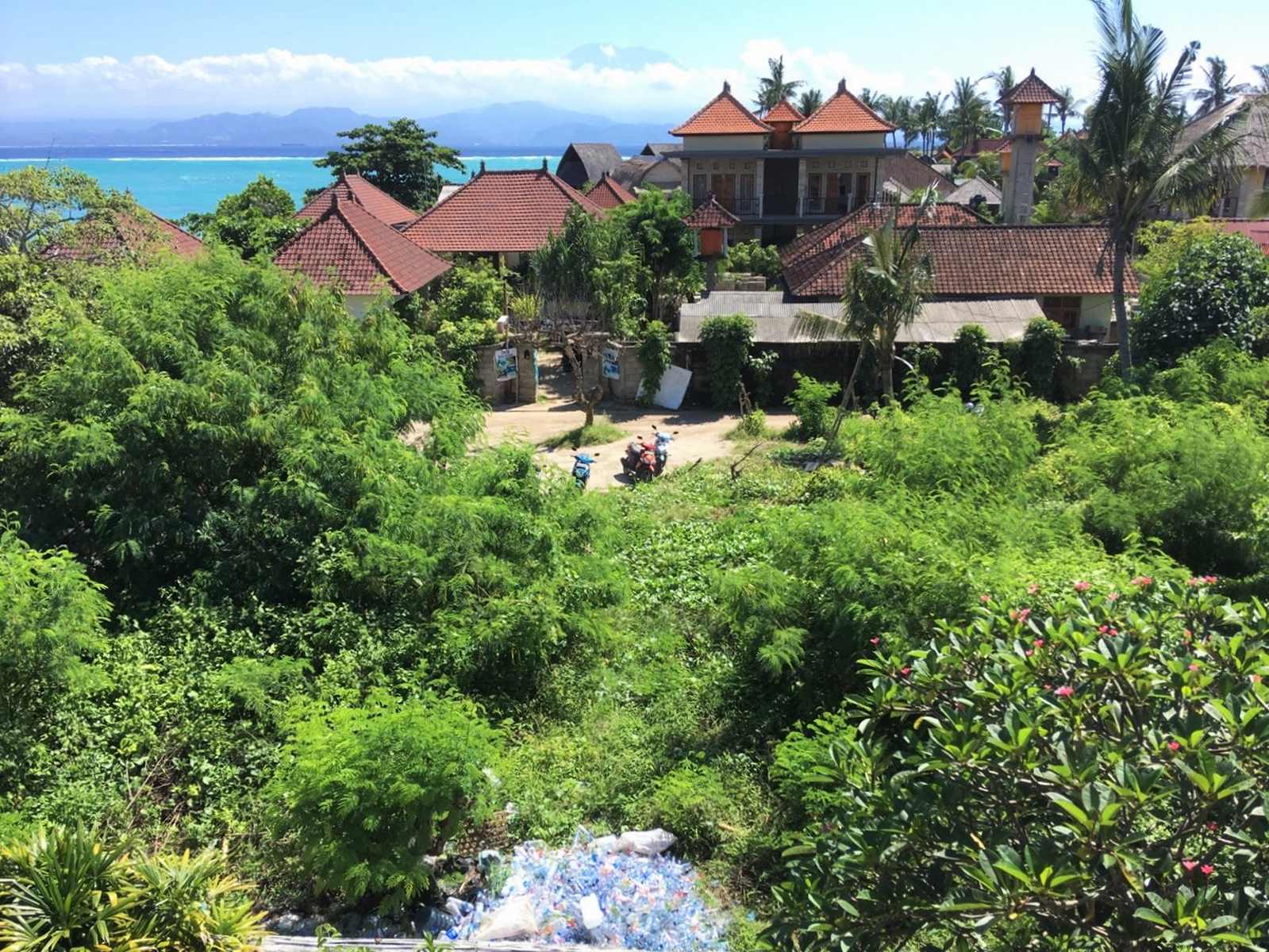 Instead, it seems that Bali’s tourism industry relies entirely on the willful ignorance and duplicity, or just outright stupidity, of tawdry visitors and self-absorbed social media influencers as they peddle their appealing propaganda of washboard abs and bodacious backends with absolutely no concern for the devastation that surrounds them, and that they in fact are contributing to. In this way, Bali can go on existing in the public eye as a bucket list beach hub for all those struck with wanderlust and a sense of adventure.

Immerse yourself in the decadent world of stunning models, ocean-view villas, health foods, amazing beaches, world-class surf and lively nightlife Bali calls out. And each year, the call is answered in the magnitude of millions, international tourists washing over the island like a heedless tsunami, all too willing to overlook the treachery. 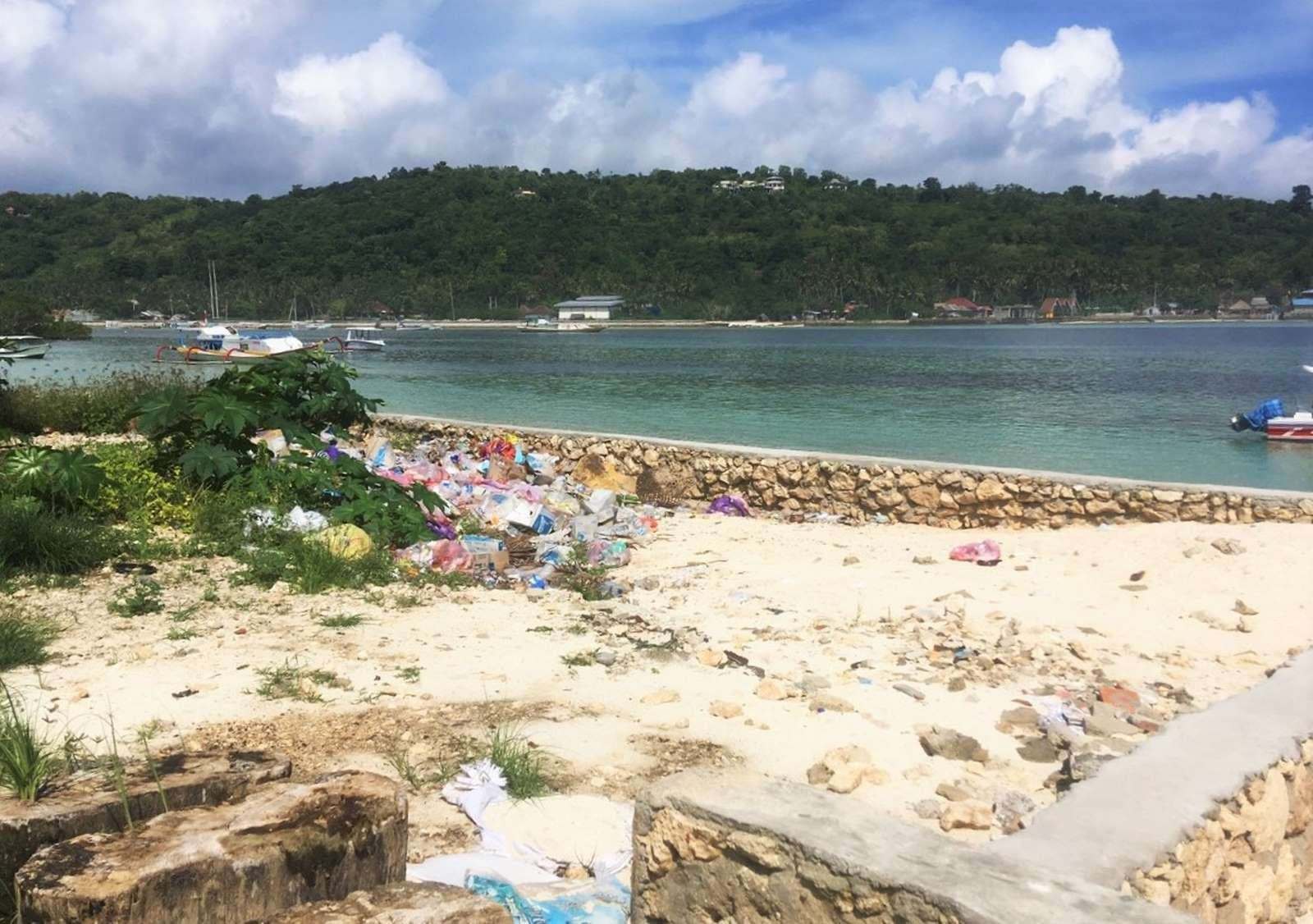 Perhaps pride prevents some from admitting that they’ve been swindled while others are simply more accepting of the squalid state of affairs, but there’s unquestionably countless travelers who’re perfectly aware of the flagrant feculence. Yet they Photoshop it out of sight along with every other imperfection in a vain attempt to garner more likes and followers, returning to their home countries with adulatory reviews. The delusion is thus endlessly perpetuated as Bali sinks deeper and deeper into disrepair.

Talking to other travelers, it’s clear that not all tourists are so oblivious or disingenuous. Some would like to see Bali restored and reformed. For this to happen, we as tourists need to reevaluate our values in the realization that the values we hold form the very framework on which the impressionable tourism industry in Bali is built.

As it exists now, Bali is nothing more than the epitome of our own superficial culture—an airbrushed island as fake as every Instagram model on it. Strip away the makeup and pretty filters, which for Bali are the made-up models and filter-crazed Instagrammers, and the unembellished Bali comes plainly into view. And it truly is a shocking sight to behold. What once was imaginably an unspoiled Eden, attracting chilled-out surfers and only the most adventurous of backpackers, has become a trashy island playground for tasteless hipster posers, wannabe glitterati egotists and shady runaway delinquents.

An honest postcard from Bali would depict trash-ridden, gag-inducing pandemonium—drunken nomads darting from bar to bar, plastic bags floating in the break like drifting jellyfish, septic rivers dammed with discarded bottles, local families picnicking on the beach amid grimy debris left by the tide—but such a canvas would be bad for business.

Bali’s tourism industry knows this, incentivizing everyone vacationing on the island to post the same iconic pictures with trending hashtags and links designed to upsurge popularity on social media. With a culture so enveloped in vainglorious ideals, an opportunity to boost one’s cachet has proven the strongest social driver, alluring more to come with siren-drawn infatuation. Never mind the sea life choking on our synthetic waste when a few extra likes can bolster the underpinnings of our synthetic self-perceptions. Your viewing pleasure has been sanitized by conceited pretension, giving prominence to a tourism industry undeserving of our categorical support.

Read more: We Need To Start a Better Conversation About Sustainable and Responsible Tourism

Will truth prevail before it is too late?

I tell this tale not to condemn or insult the people of Bali, who happen to suffer under these conditions more than anyone; I tell it because it seems to be the unspoken truth, and the truth can precipitate meaningful change. Speaking honestly is the real way to support places like Bali as the planet continues to fall under greater environmental strain. If tourism to Bali dwindles as more realize it to be far from what’s promised, economic pressure will only encourage the modernization of local and regional environmental policies until conditions are restored to standards befitting a picturesque island getaway. 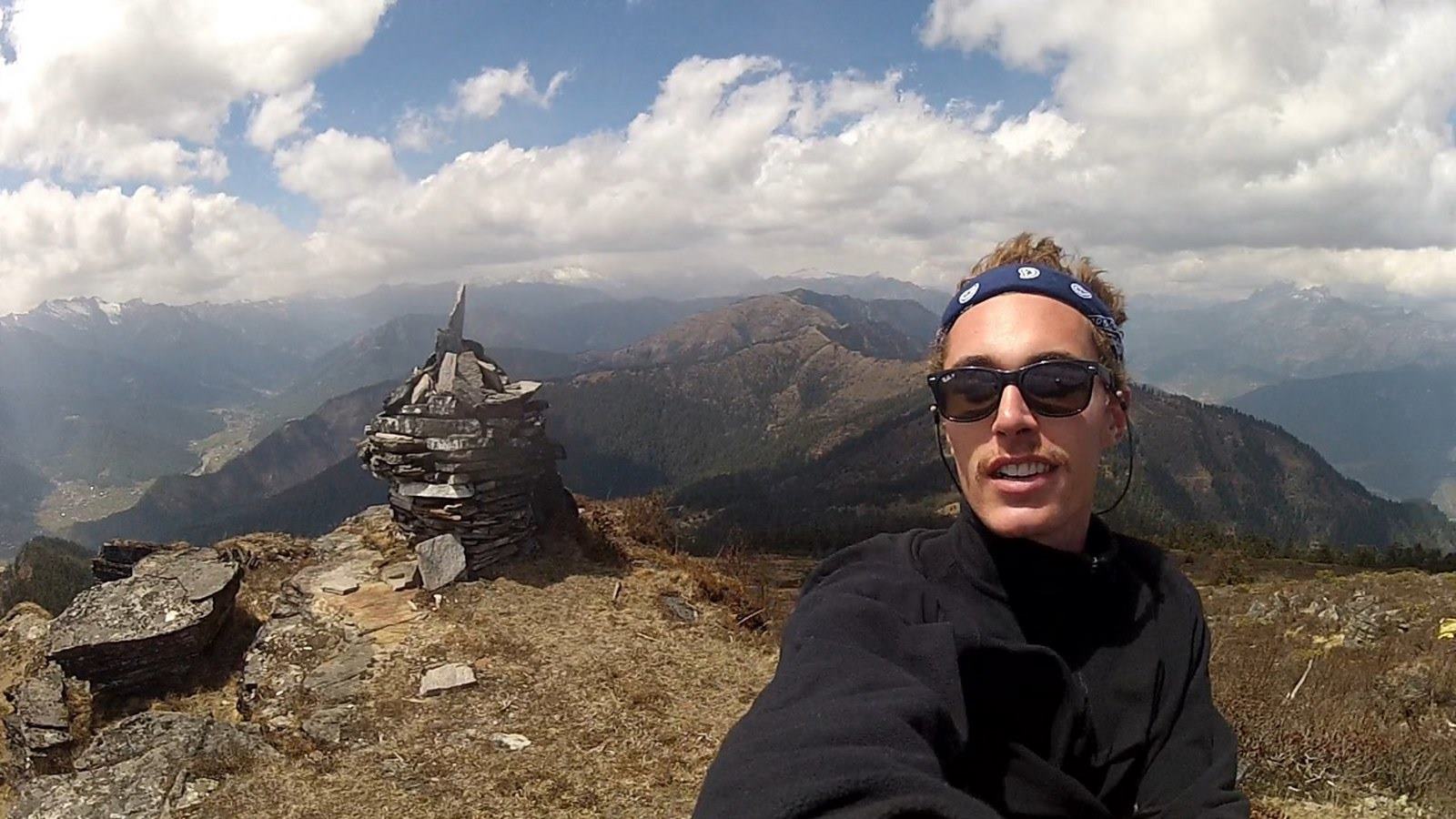 The author on a Bhutan mountain top

Then, and only then, will what’re some of the most breathtaking sunsets this world has to offer be wholly and unabashedly enjoyed. On my flight home, I wonder whether “civilized” culture will come to value truth over perception before the so-called machine destroys us all.

Do you know of other negative effects of social media on tourism? Get in touch. 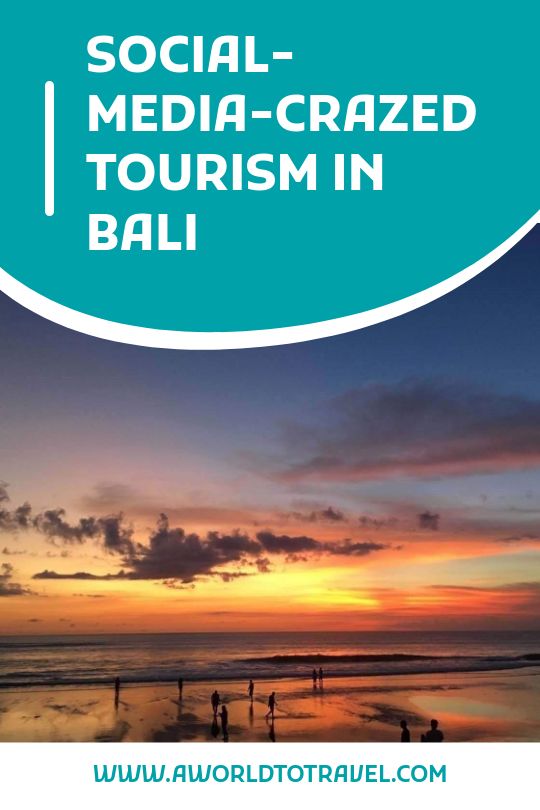 Philip Finkelstein is an avid writer and traveler from Vermont with a degree in political science from the University of British Columbia. He has a deep passion for environmentalism and a desire to bring about meaningful change. You can follow Phil's adventures on Instagram @felipefinklez.