10 Of The Best Safaris And National Parks In Uganda

Uganda is a relatively small country but blessed with many tourist attractions, a good climate, and friendly people.

In his tour of Africa, Winston Churchill had great admiration for the country’s natural beauty and described it as ‘the Pearl of Africa’. One of the factors responsible for Uganda’s rich diversity in flora and fauna is its location along the equator. This ensures that the county receives the right amount of rainfall and sunshine that supports several species of plants and animals.

Uganda is one of the best countries for birding in Africa and home to half of the remaining population of mountain gorillas. Gorilla trekking is an extremely popular activity that attracts thousands of visitors to the country each year. On top of its gorillas, Uganda is blessed with great rivers and lakes like River Nile and Lake Victoria. 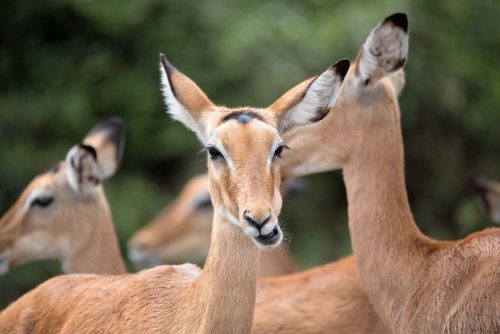 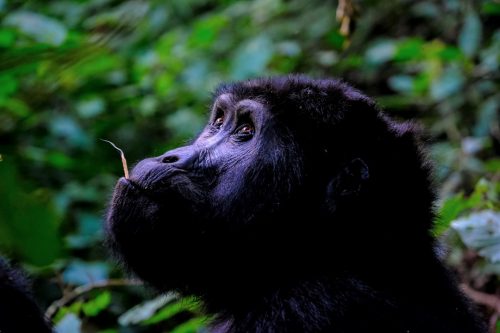 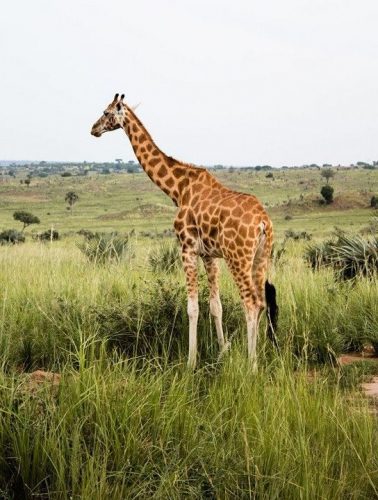 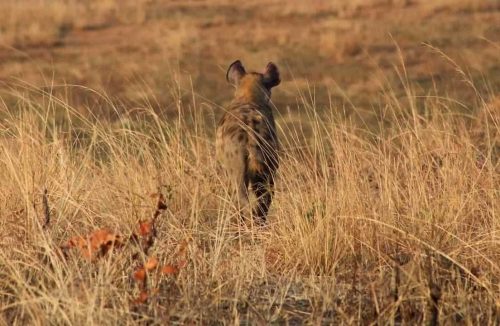 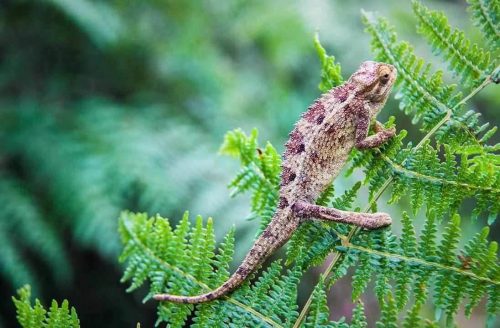 The tourism industry in Uganda has flourished since peace was restored in all parts of the country with the flushing out of the Kony rebels who had caused revolts in the northern part of the country. As mentioned before, these days there are several activities that one can get involved in while in Uganda.

These are the top 10 places to visit there if you are looking forward to memorable Uganda safaris and National Parks: 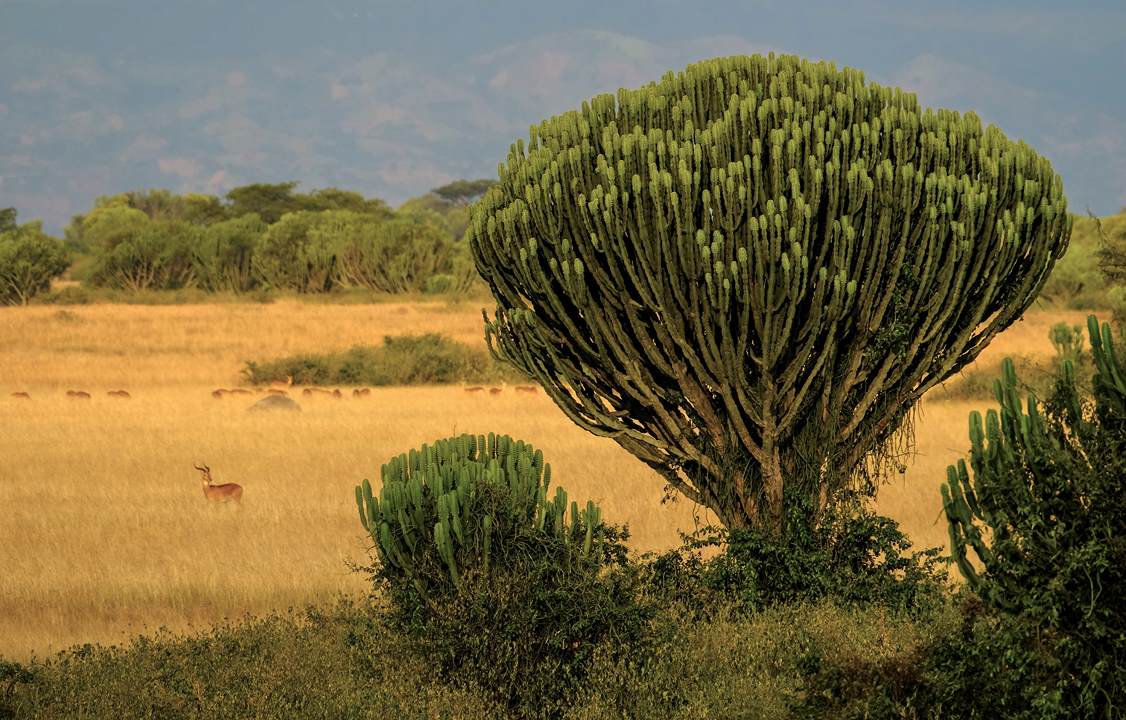 Queen Elizabeth National Park is one of the most visited tourist destinations in Uganda. One of the reasons for its popularity is its proximity to Bwindi, Mgahinga, and Kibale. The three parks house the largest population of mountain gorillas and chimpanzees in the world. Hence the majority of people who come to see the large primates, also visit Queen Elizabeth National Park.

The park has outstanding attractions on its own. It is relatively green throughout the year and tourists are assured of great photos and beautiful scenery to behold.

A boat cruise along the park’s Kazinga channel takes you to one of the best birding sites in Africa. The rare Shoebill Stork can easily be seen along this channel. The park also has rare tree-climbing lions, hippos, buffaloes, elephants, leopards, and countless numbers of antelopes. Chimpanzee trekking can be done at the Maramagambo forest of Kyambura Gorge.

Kibale National Park is known as the primates’ capital of the world and is the best place to track chimpanzees in Africa.

Today the estimated number of chimpanzees in Kibale is over 1600. Unlike mountain gorillas that tend to feed in one area at a time, chimpanzees wander a lot. Their mobility makes it difficult to guarantee their sighting on a particular day in most of the other parks where they are found. But that is not usually the case here. The primates are so widely spread that the chances of seeing them are quite big.

The park has also thirteen different monkey species including the grey-cheeked mangabeys, red colobus, and L’Hoest’s. Unfortunately, Kibale has no mountain gorillas. Had it been the case, we would be discussing the most visited wildlife conservation area in Africa. 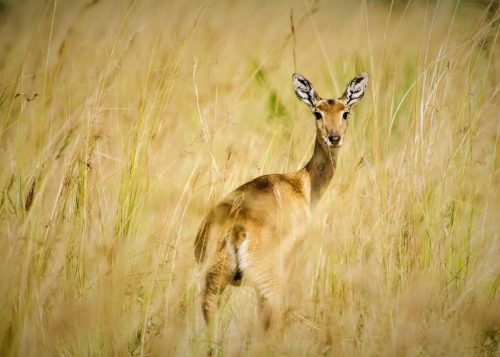 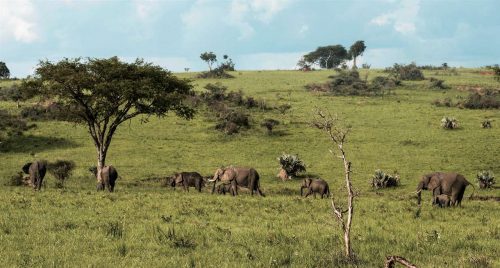 Murchison Falls National Park is the largest in Uganda covering an area of 3,800 square kilometers. The name is derived from its top attraction: the Murchison Falls. The falls form at a spot where the river Nile forces its way through a narrow gorge before plunging down in a great roar. The mist from the falls combines with sunshine to form spectacular rainbows that are beautiful to behold.

But the park is not all about the waterfall. We are talking about one of the largest wildlife conservation sites in Africa. Murchison Falls National Park has the largest number of Rothschild Giraffes in East Africa. And because of its closeness to the Ziwa Rhino Sanctuary, it is possible to spot all the big five mammals.

Apart from the big 5, antelopes, and small primates, the park is a birders paradise with over 200 species recorded. A typical Uganda wildlife safari to Murchison Falls usually includes white water rafting at the Karuma falls and chimpanzee trekking in the park’s Budongo forest.

Bwindi is a UNESCO site because of its rich biodiversity, comprised mainly of large and dense forests that have made Bwindi be referred to as ‘the Switzerland of Africa’. These forests hide man’s closest relatives – the endangered mountain gorillas. Bwindi has more mountain gorillas than any other park elsewhere. Gorilla tours are the most popular activities in Bwindi and draw thousands of tourists to Uganda every year.

Bwindi also has chimpanzees and other small primates like Colobus monkeys. Bird lovers can spot up to 300 different species in the forest including the African green broadbills and black-billed turaco. A tour of Bwindi impenetrable forest would be incomplete without learning about the threatened Batwa pygmy community, their ancient life in the forest, and how their eviction has negatively affected their lives.

Being the nearest park to Uganda’s capital Kampala, Lake Mburo has become a favorite for visitors who have come to the city for a short business trip and wish to see some of Uganda’s wildlife before departing.

There are more zebras in Lake Mburo than anywhere else in Uganda and it is also the best place to spot the elusive African leopard. These big cats thrive here and the chances of seeing them are very high. Other animals that can be seen in the park include buffaloes, jackals, hippopotamus, crocodiles, hyenas, lions, and antelopes. 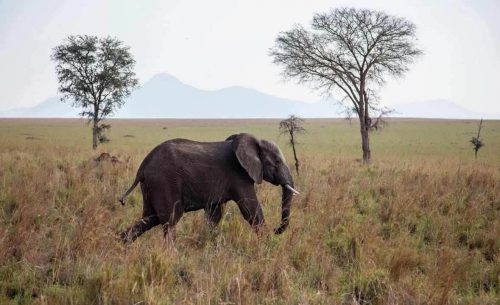 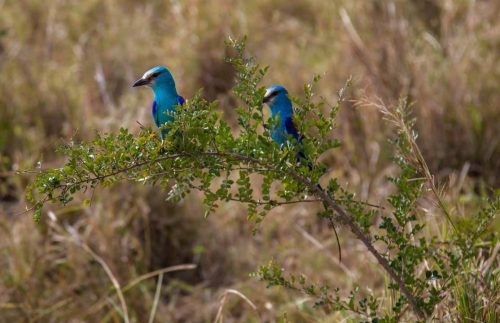 CNN Travel described Kidepo National Park as one of the best three places to go on a safari in Africa.

The magic about Kidepo is that it is the only park in Uganda that has unspoiled African wilderness partly because of its remote location in the northeastern part of Uganda, which prevents local and international tourists from easily accessing it. Rebels used it as a hideout before they were finally flushed out and today travelers that adventure there get a feeling of being alone in a true African wilderness like it used to be before modernization.

Visitors who can endure the long-distance should be prepared for something truly different. Kidepo offers a spectacular landscape comprising of great mountains and valleys that house rare species and animals found nowhere else in Uganda like the African wild dog, ostriches, oryx, and cheetahs. Kidepo also has the largest buffalo herds in Uganda and it is home to baboons, bush babies, and elephants.

Lake Bunyonyi was formed after the area’s volcanic activity raised land, creating a deep valley that was later filled with water and forming a lake with twenty islands. It is one of the most scenic and naturally beautiful lakes in Africa, and the second deepest lake in Africa.

There are no crocodiles, hippos, or bilharzia to worry about although inexperienced swimmers may exercise caution. Bunyonyi lake is perfect for relaxation after visiting parks like Bwindi and Queen Elizabeth, and before departing to Kampala or Entebbe.

This area is also perfect for lovebirds, honeymooners, and couples willing to spend some time in a quiet and romantic place. They all will find this place memorable.

The Ssese Islands is an archipelago formed by 84 islands on Lake Victoria. They provide the same romantic and serene environment found in Lake Bunyonyi, this time in the second largest lake on earth.

Everyone – both tourists and locals – are fond of the lake because it offers numerous spots to escape away from the busy and stressful life in the city over the weekend and their white sand beaches are perfect for relaxation, birdwatching, biking, nature walks, and spotting small primates.

Bugala Island is the largest and most visited but the smaller and less visited islands are also worth exploring. The only way to reach them is with a speed boat or taking one of the two ferries run by the government.

The source of the Nile

The source of the great river Nile is found in Uganda’s Jinja district at a point where the river meets Lake Victoria. The Nile is the second-longest river in the world and flows from Uganda to Egypt after passing through South Sudan and Ethiopia.

Jinja is a not too busy touristy town with a few interesting places to explore. The most popular activity there is white water rafting near the source of the Nile, usually one of the last activities after a long safari in Uganda. But there are other activities to do near the source of the Nile apart from white water rafting such as bird watching, boat cruises, bungee jumping, boat riding, kayaking, and camping.

Now, mountain climbers should never be left out in a country with mountains like the ones Uganda has as there is one major challenge for experienced mountain climbers in Uganda: reaching the snow-capped peak of the Rwenzori Mountains.

These peaks are found in Mount Rwenzori national park – one of the favorite places to visit in Uganda for climbers – which has its own collection of interesting fauna and flora, hence hikers should expect to spot small primates, birds, antelopes, and stunning scenery on their way to the top of the mountain and in the park.

At the border between the Democratic Republic of Congo and Uganda, Mount Stanley is the highest of the lot and the fourth in Africa while Mount Speke comes close at fifth. Reaching the highest peak Margherita is considered a great accomplishment even by world standards.

Finally, keep in mind that the best time to visit the country National Parks for great Uganda safaris is during the dry season from December to February and from June to August. 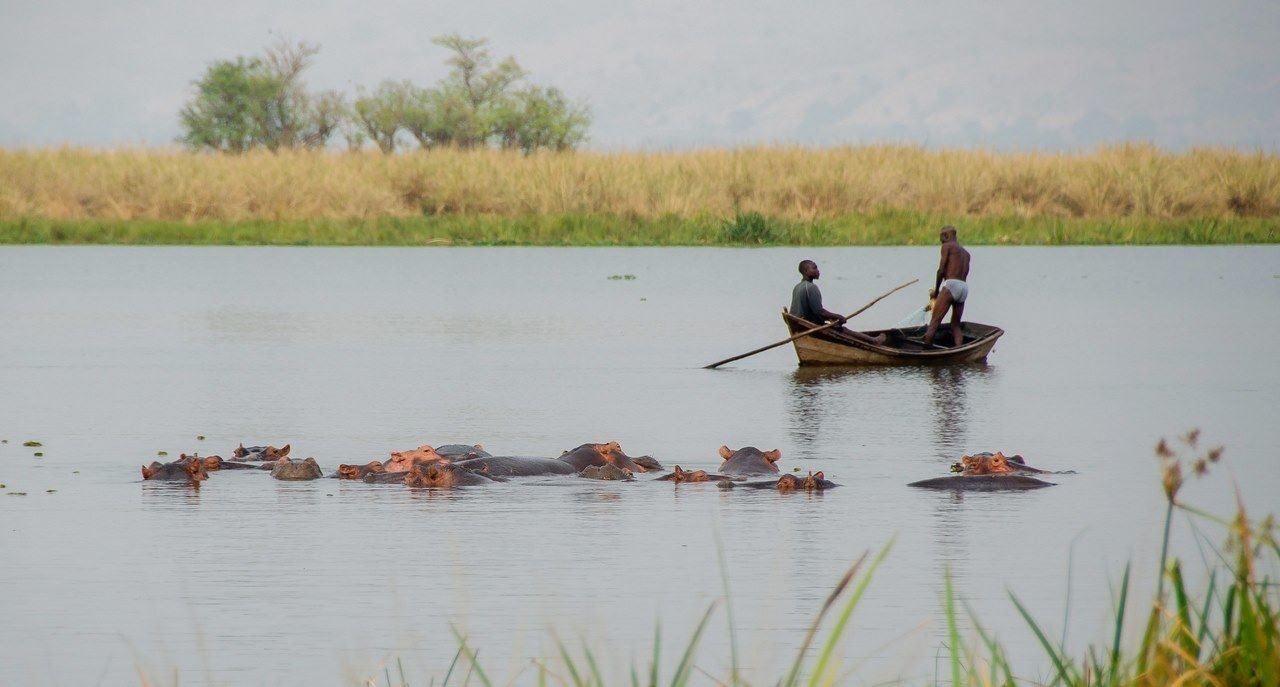