Find out which are the best Seychelles islands to visit in this guide that goes through seven of the most beautiful, and absolute must-sees, in the archipelago.

Where is Seychelles located and how many islands are there?

There are over 155 islands that make up the archipelago of the Seychelles, a lot of which are uninhabited. They sit around 1000 east of the coast of Kenya, in the middle of the Indian Ocean. The islands are home to an undiscovered world of jungles, coral reefs, granitic mountains, waterfalls, and of course pristine beaches. 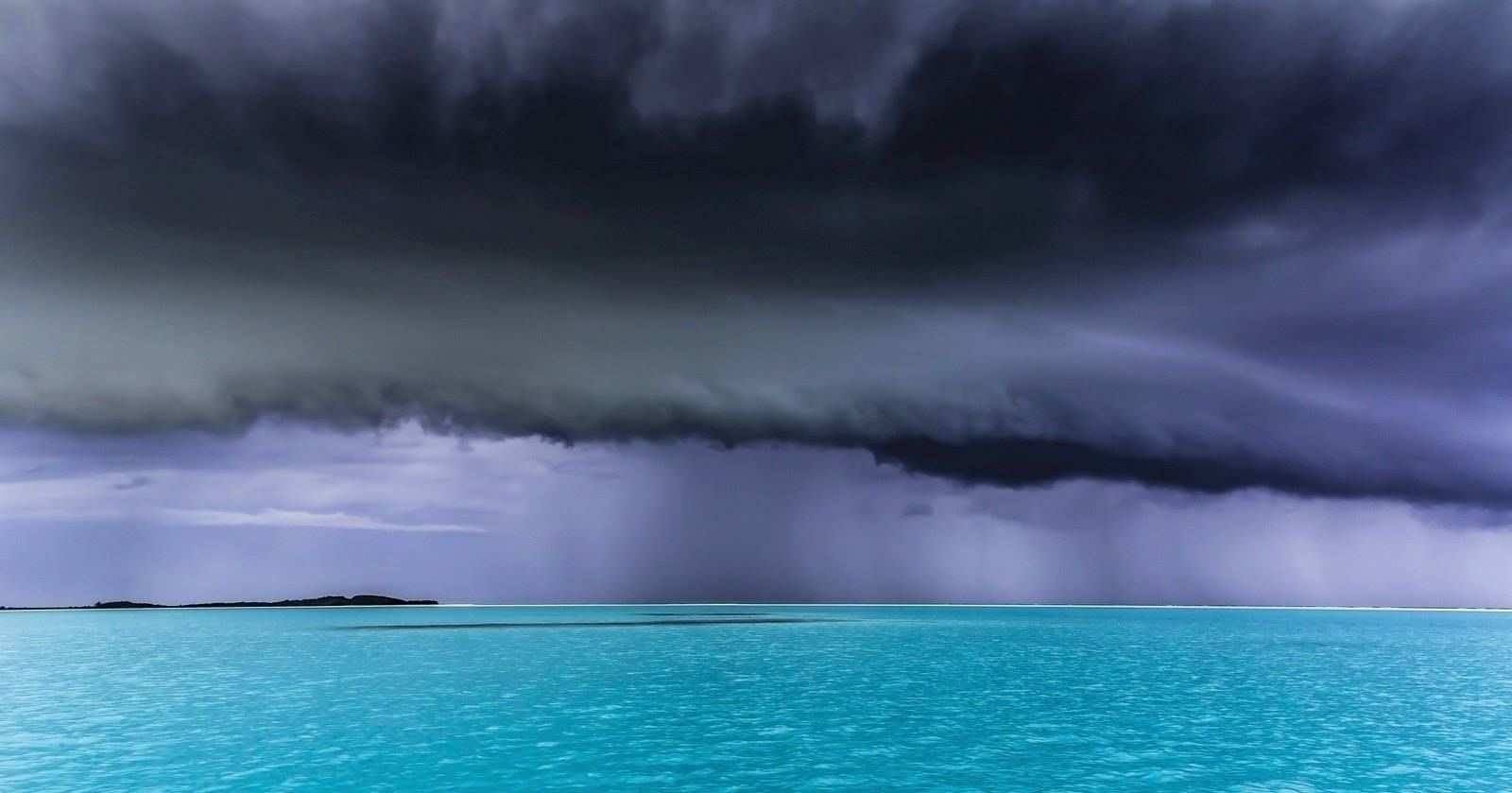 Brief history of the Seychelles islands

The Seychelles remained undiscovered for a long time and were only first sighted by Europeans in 1503. It was Vasco De Gama of Portugal who first saw them but kept sailing past without docking.

The first landing was by the British in 1609 but they didn’t stay long and the islands were used by Arab traders and pirates until the French decided to take over in 1756. However, their time on the throne didn’t last long and the British eventually laid claim to the islands in 1794.

The Seychelles gained independence from the British Empire in 1976. 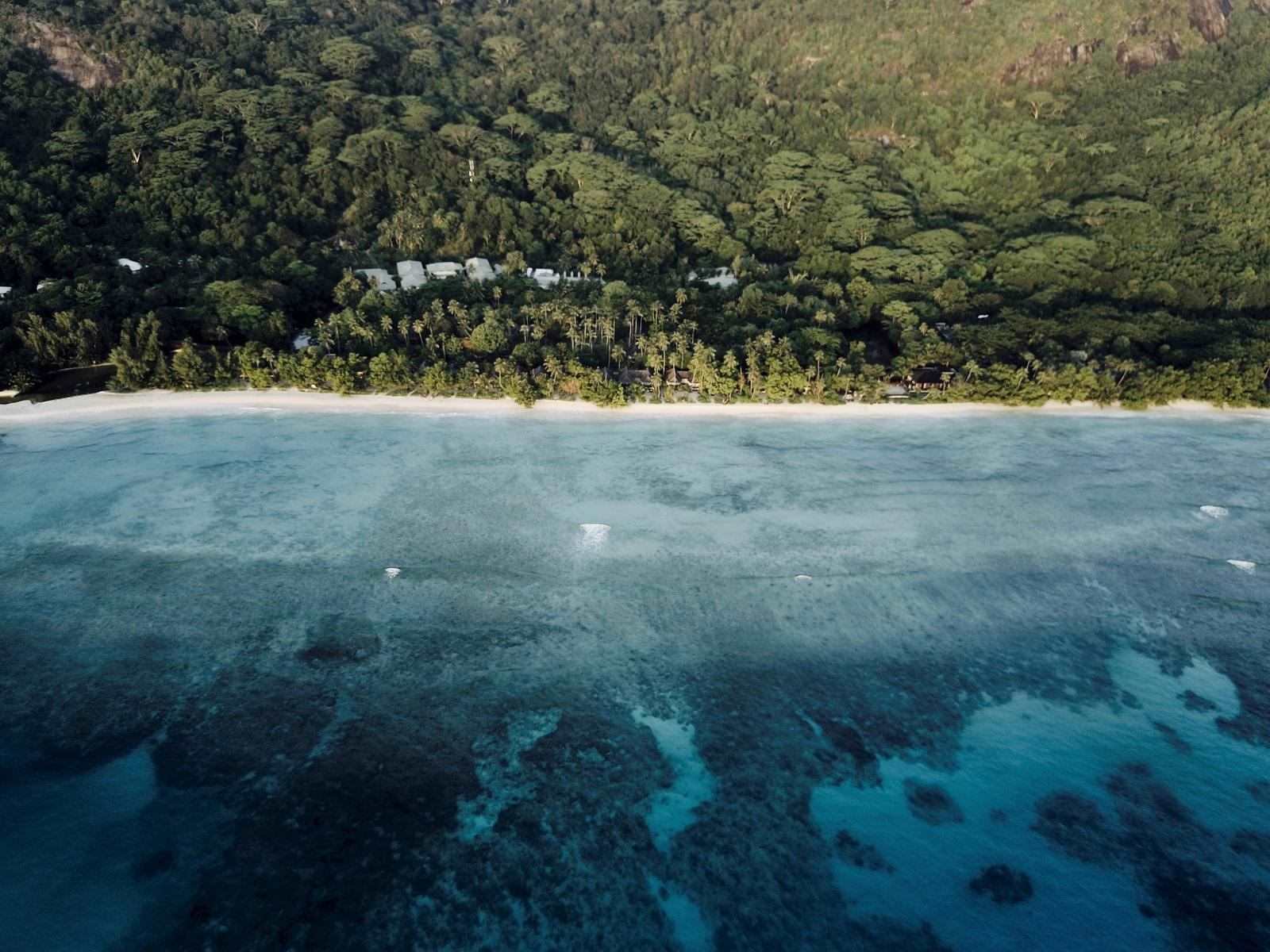 The Seychelles have never been a major player on the global tourism map. When people think of island escapes, their minds wander to the Maldives, Greece, and Hawaii. Seychelles is still to be discovered by the masses and a lot of it still remains untouched. It’s a place where you can get off the beaten track and enjoy the peace and tranquility without many tourists around.

What’s the most picturesque Greek island?

Which Hawaiian islands should you visit?

Best islands to visit in the Seychelles

Mahe is the most popular and biggest island in the Seychelles. It’s home to the capital Victoria, and the highest population of local Seychellois in the island chain. It has a great hustle and bustle to it and there’s every option of accommodation available from local guesthouses to flat out luxury. 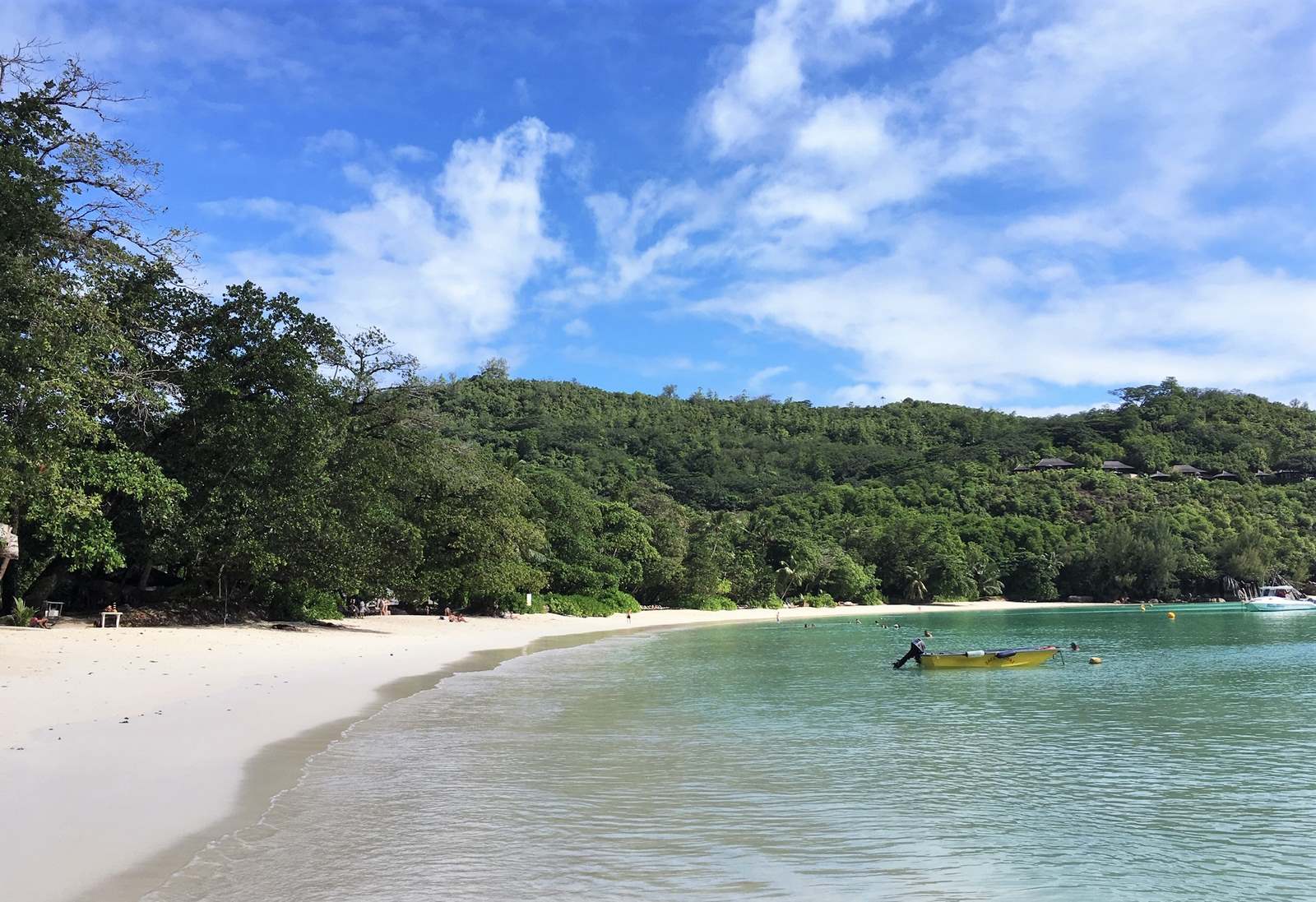 There’s a lot do on Mahe, but you’re probably going to want to head straight to the beach to start with. Beau Vallon is one of the most well-known beaches and is fringed by resorts and a market. It has a great vibe and there are a lot of activities available on it. Don’t get stuck there though, there are hundreds of beaches and you can find secluded empty spots if you get off the beaten track.

It’s worth a visit to the capital Victoria to see the museums, botanical gardens and market places. A hike into the Morne Seychellois National Park is well worth it, there are great trails that take you to waterfalls, mangrove forests, the highest peak and to the most secluded beach on Mahe Anse Major. There are options to go on a sailing boat for a day to hop around the nearby islands, go diving, snorkeling, fishing, kayaking, and more. 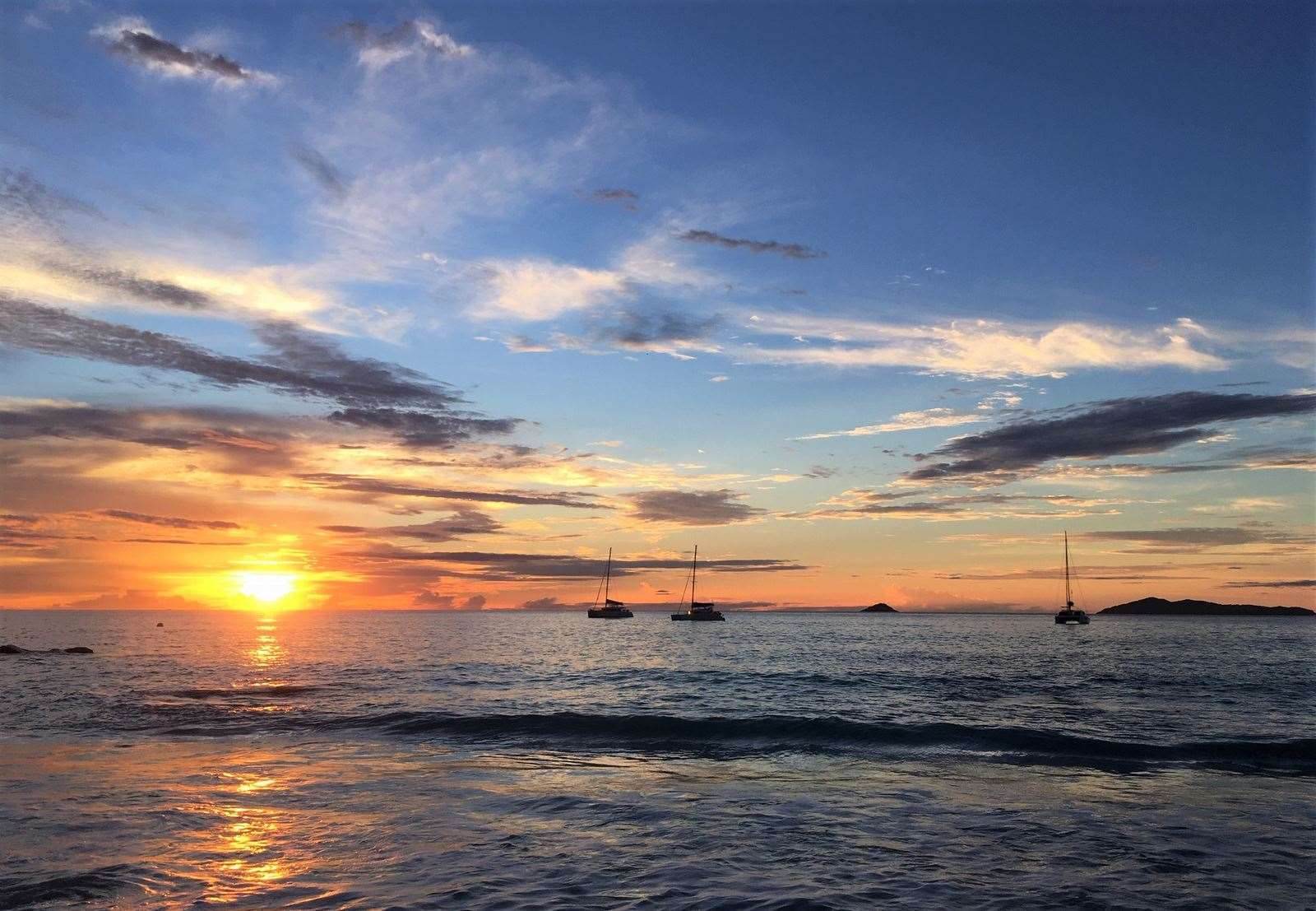 Praslin is the second-largest island in the Seychelles but is far less populated than Mahe with only 6,500 residents compared to Mahe’s 80,000. It is far less developed and more laid back than Mahe and you’ll feel more of an island vibe there. You can fly from Mahe or hop on a ferry to get there.

Praslin is known for some of the most beautiful beaches in the world, especially Anse Lazio which is picture-perfect and has some great snorkeling right off the shore. Praslin is also home to the Vallee de Mai Nature Reserve, a UNESCO World Heritage Site that has one of the only two populations of coco de mer trees in the world. The coco de mer produces the heaviest nut/seed in the world. A walk through the park will also give you a chance to see the endemic shy and elusive national bird, the Seychelles black parrot, bronze-eyed geckos, and coco de mer snails.

The diving in Praslin is excellent and the dive center there, Octopus Dive School, on Cote d’Or beach is one of the top ten in the world. They offer courses of every level and the staff are fun and great instructors.

On Praslin there are great restaurants, museums, a clam farm, and more to explore while you’re there, you won’t be wondering how to spend your days. 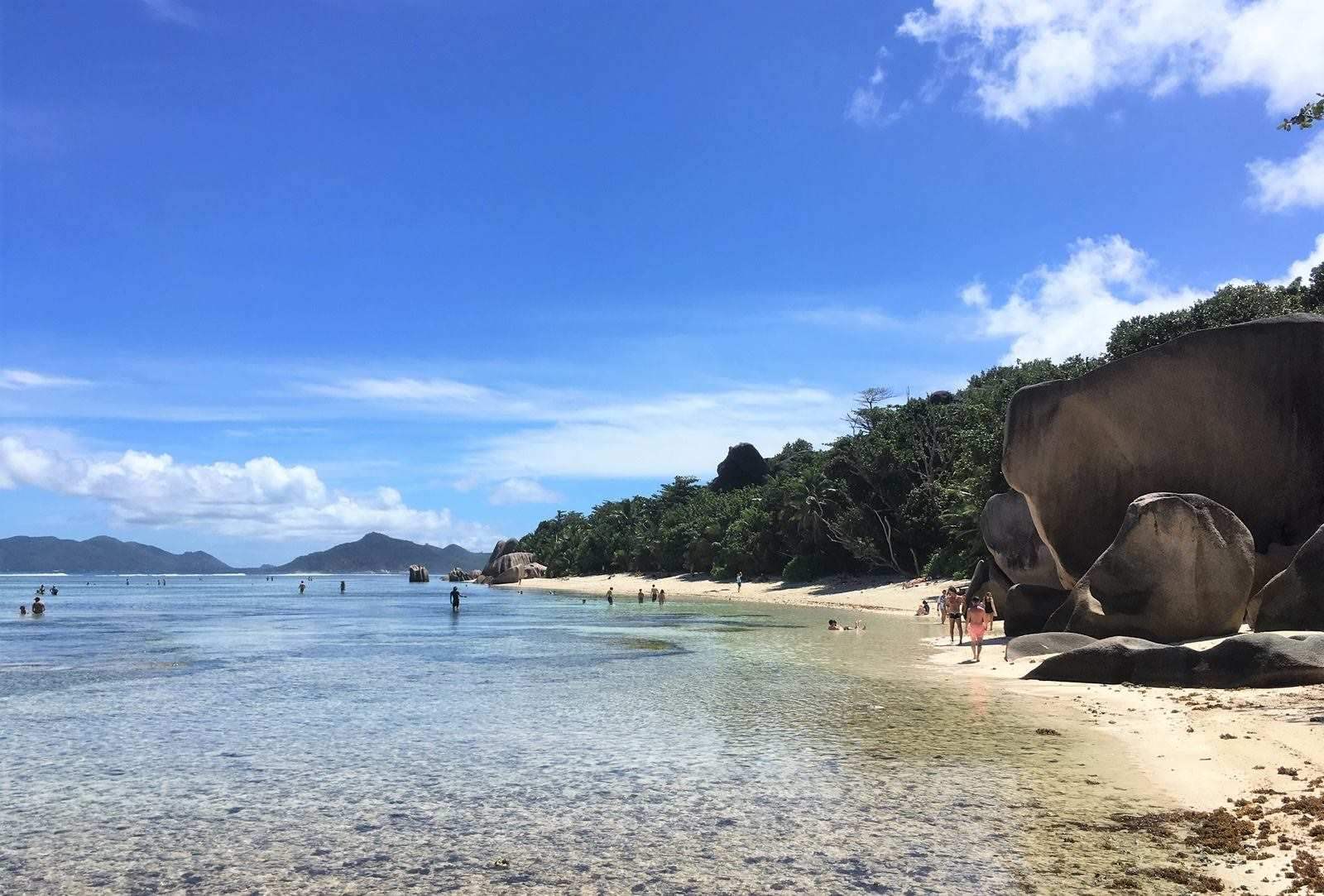 La Digue is the fourth biggest granitic island of the Seychelles and only encompasses an area of 10km squared. It has a tiny population of 2800 people that live mostly on the west coast around the villages of La Passe. There is no airport in La Digue and your way onto the island is by a ferry from Mahe or Praslin.

There are barely any vehicles on La Digue and your main mode of transport will be by bicycle which can be rented all around the island. It’s a lot of fun to explore the island independently while riding around on the sandy pathways. 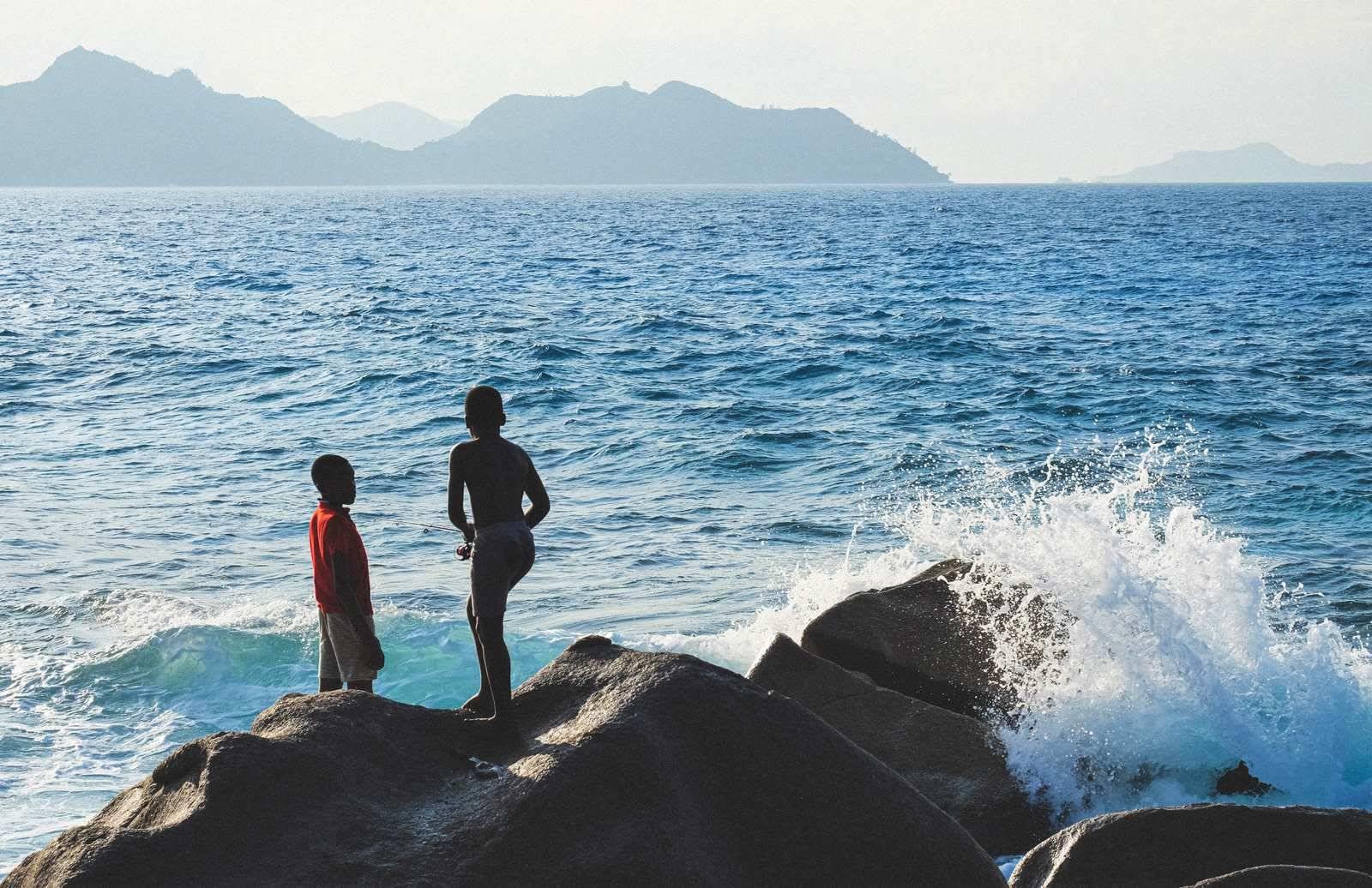 La Digue is a beautiful mix of white sand beaches, a chilled local atmosphere, and a stunning forest. Like Praslin, it also has one of the most famous beaches in the world, Anse Source D’Argent, which is famous for its giant granitic boulders. It does get very busy though and at high tide, there isn’t much beach left. It’s well worth a bike ride south to the beaches of Petit Anse and Grand Anse. These are far more secluded, off the beaten track and there is great snorkeling from the shore.

It’s worth visiting L’Union Estate and you’ll have to go through it to get to Anse Source D’Argent. The estate has an old plantation house and a functioning copra mill where you can learn about the history of the island, how to make coconut oil, rent horses, and see giant Aldabra tortoises.

The Ile Cocos Marine National Park is a short boat ride from La Digue and is an amazing place to go snorkeling. Its made up of a group of 3 small coral-fringed islands and you will have the chance to swim with turtles, rays, stunning coral, and huge shoals of colorful fish. Be sure to keep your ticket with you as rangers often check.

Veuve Nature Reserve sits in the middle of La Digue and holds its tallest peak, Belle Vue (Eagle’s Nest Mountain). It is a beautiful park to hike around and the views from the summit are incredible. For a real challenge, try and get up there for sunrise.

It’s also home to the endemic Black Paradise Flycatcher which you may get a glimpse of if you’re lucky. 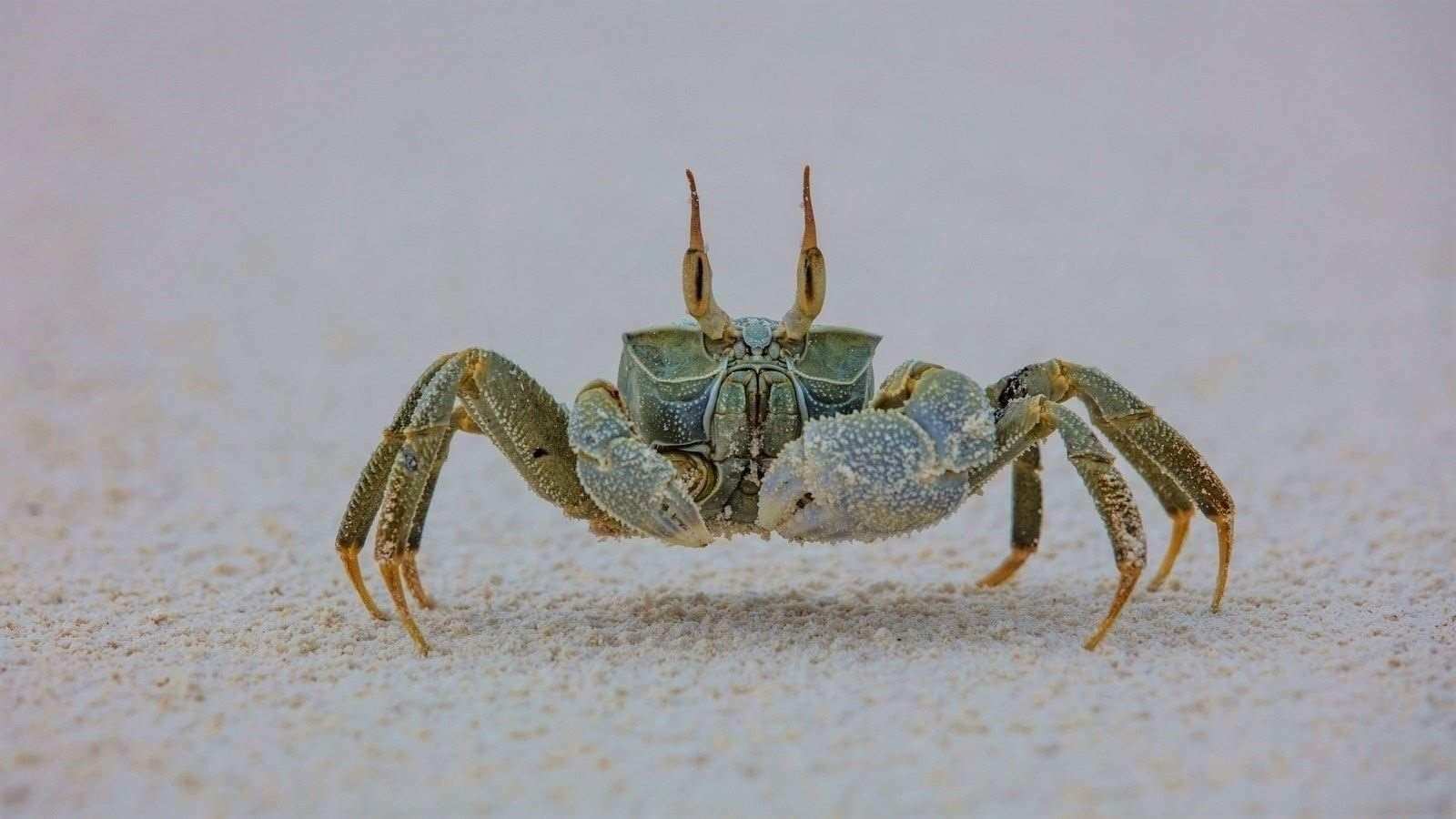 These sister islands are some of the most unspoiled in the whole of the Seychelles archipelago and can only be accessed by boat on a day trip from Praslin or La Digue. They have never been developed and are home to a large nesting turtle population.

Petite Soeur is surrounded by a reef and hard to access unless the sea is very calm. Grand Soeur is a private island and there is a limit to the number of daily visitors allowed. It truly is a step back in time and makes you feel like you’re in Jurassic Park. The island has stunning beaches, forest, granite boulders, and a load of giant Aldabra tortoises roaming around.

Grand Soeur is known for its snorkeling and it’s well worth a little peek underwater. The coral, fish species, and turtle populations are very impressive and well preserved.

Curieuse is a small granitic island just off Praslin. It’s easy to get to by boat and you can easily arrange a ride over from either La Digue or Praslin. The island is a nature reserve and is completely uninhabited by the rangers who live there to protect it. It’s a fantastic day trip and roaming around the wild and beautiful island isn’t something you’ll forget very soon. 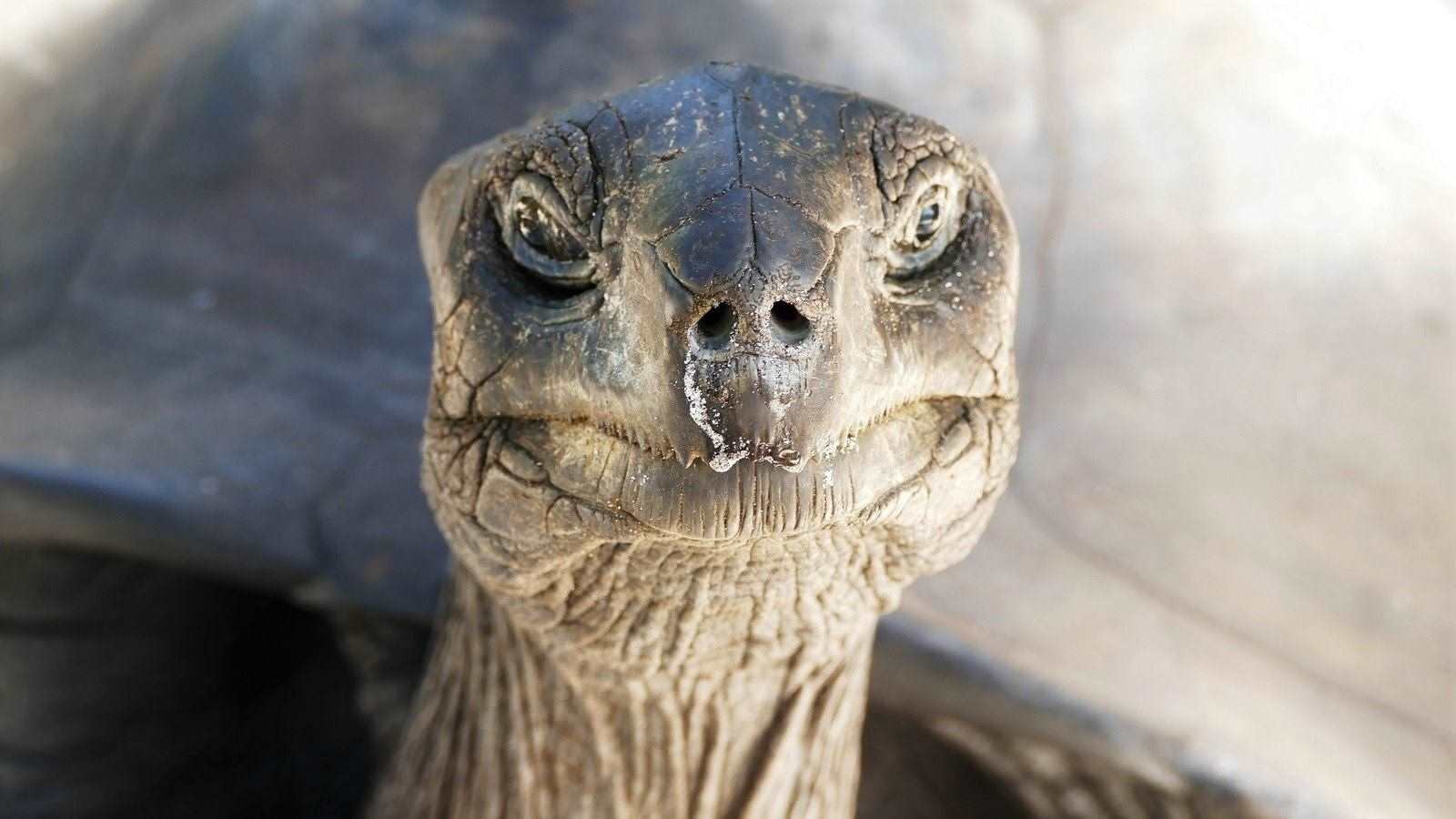 It’s full of diverse fauna and flora, endemic birds, a coco de mer forest, and Aldabra giant tortoises. There are around 120 giant tortoises on the island and they are really friendly. Once they spot you’ they’ll rush over with a smile on their face in the hope of a little neck tickle.

The beaches of Curieuse are also beautiful and worth exploring while you’re there. As part of the day trip, you’ll get to have a barbeque with the rangers and learn about how they protect the island and about its natural wonders. 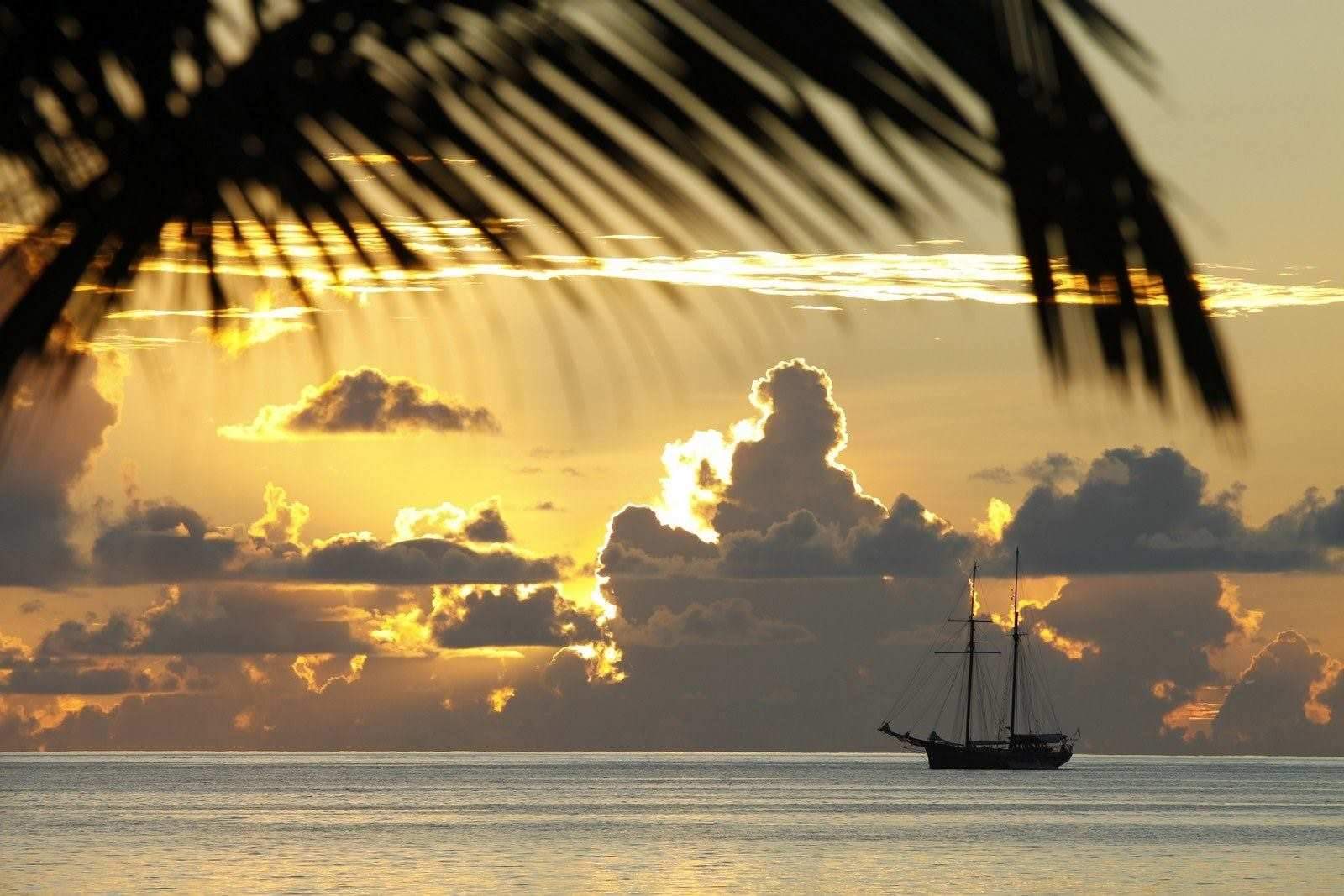 St Pierre is a tiny spec of an island off of Praslin. It is a postcard island if you have ever seen one and is easily accessed by boat. The main reason to go there is for snorkeling. The island is known to have some of the best snorkeling in the Seychelles and is surrounded by colorful fish, turtles, rays, and sharks. The coral is minimal as it has suffered from bleaching like the rest of the world but it’s still worth a visit, especially if you’re staying on Praslin. 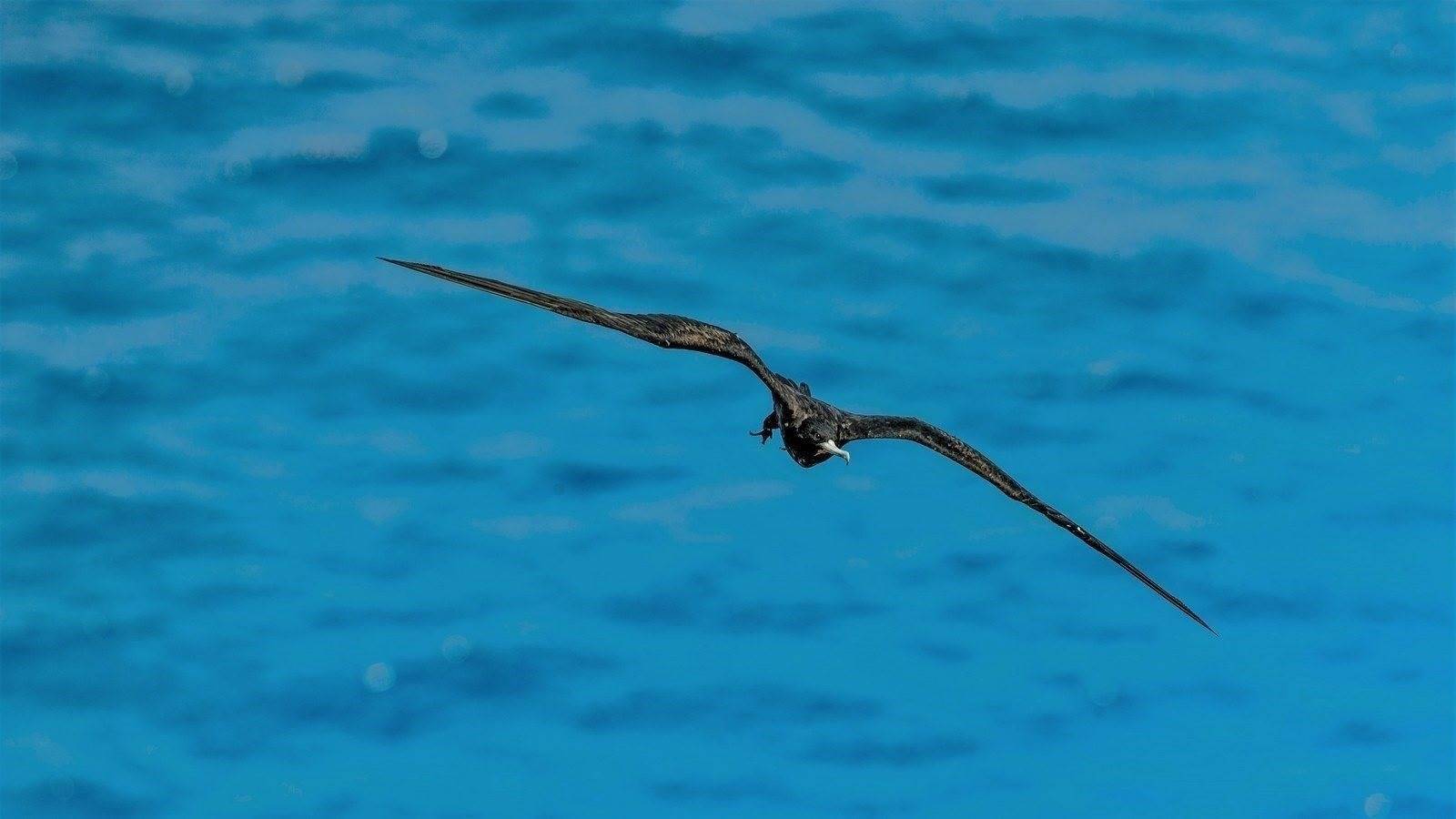 Cousin Island was once a coconut plantation and during this time lost most of its endemic species. It was then bought by BirdLife International in 1968 who made the island a special reserve and worked hard to bring the island back to its natural form. Today it is a paradise of endemic and sea birdlife. It’s home to over 300,000 nesting seabirds and the Seychelles Warbler, Seychelles fody, Seychelles magpie-robin, and more endemic species.

Cousin Island is found just off Mahe and day trips are easily arranged. On arrival, you’ll be put into small boats and ferried over the reef to the island. Once on land, you’ll be guided around by rangers who’ll show you all the amazing birds. Remember your mosquito repellent as there are quite a few on the island.

How to get to Seychelles

Seychelles are easy to get to. There are direct flights from European cities (Frankfurt, Paris, London) and African ones (Johannesburg, Addis Abeba, Nairobi), and daily flights from the major middle eastern hubs of Dubai and Qatar on top of other Southern Asian destinations. Check Flyadeal booking for special deals once travel is allowed again.

All international flights land on the main island of Mahe, home to the capital Victoria. From Mahe, you can hop on ferries, boats, and internal flights to explore the islands further afield.

We have only really scratched the surface here in terms of the amazing islands of the Seychelles. There’s so much to explore and a lot of diversity between the islands. Take it slow when you’re there and pick the ones that suit you, you’ll never be able to see them all, but go for your favorites. 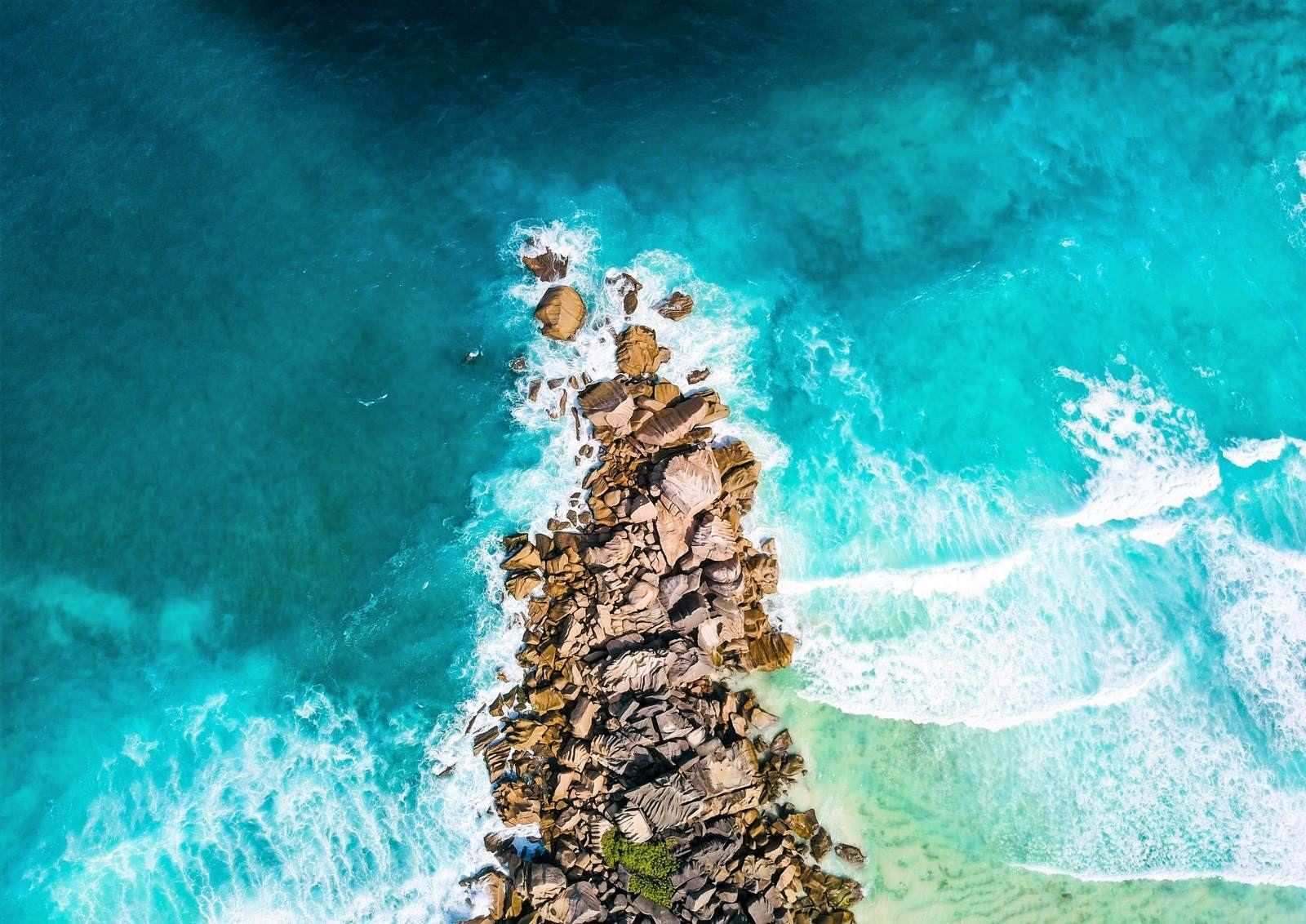 Mike is addicted to both adventure and travel, so decided to combine the two to form TheAdventourist. There he shares his journey from one adrenaline rush to another, always exploring new places as he goes. You can find him sharing his travels on Facebook. 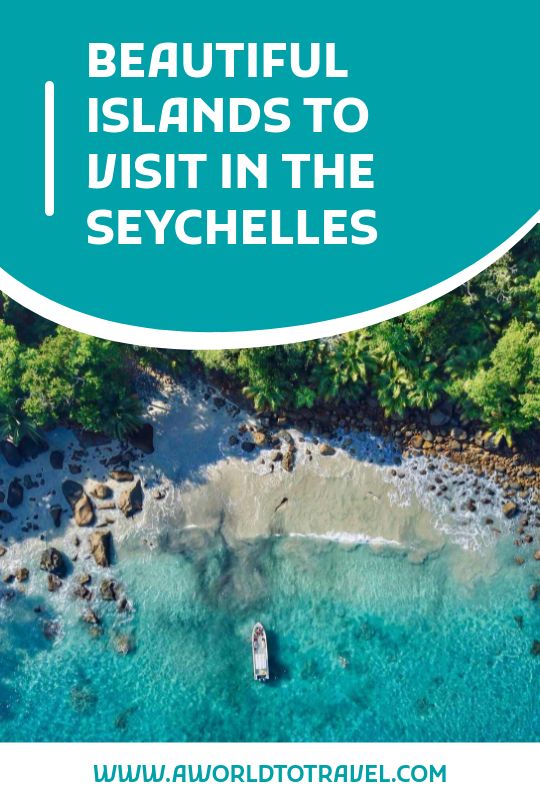