The Joys Of An Iceland Northern Lights Quest

The plane skidded to a halt in Keflavik International Airport, which must be one of the calmest in the world, at the start of our quest to see the Northern Lights. We had picked the optimum time of year but there was no guarantee – we were both wondering if the lights would stay out of sight.

Unlike most airports in capital cities, most of the people are not arriving for business, stressing about catching connecting flights and adjusting their suits. It is people like us, tourists – or even famous actors come to explore the ice fishing. In our flight’s case, it was Michael Gambon of ‘Harry Potter’ fame. I shook his hand and told him I was an admirer. He was rather taken aback someone had recognised him on his routine escape to Iceland, a place where even celebrity takes a holiday. I was hoping some of that Potter magic would guarantee us a glimpse of the Northern Lights as we stopped over on our way from the UK to America.

Our flight had been comfortable luckily – you can’t be picky about which company you want to fly with, Iceland Air is near enough the only one.  We were waved through Security; a local Icelander later informed us the check was really for Icelanders trying to smuggle more than the allotted one litre of spirits, one bottle of wine and six beers into the expensive country. A Flybus employee hurried over, telling us to be quick as there was no other shuttle bus for five hours. Looking back, as we headed for the coach, the airport seemed to close down. Shutters were closed, employees were exiting in droves. If there had been curtains I’m sure we’d have seen them twitch.

The bus ambled towards Reykjavik, the beauty of swooping snow covered mountains and vast open space breathtaking. Trundling slowly to avoid skidding, we willed the driver to take his time so we could stay amongst the ever changing landscape – and the warmth of the heaters. It was mid-March and freezing. We had chosen this time to search for the elusive rare winter beauty of the Northern Lights. It’s hard to be on a budget in Iceland, but if you are also on a money saving mission, avoiding summer is a useful tip. Prices soar when the sun comes out. 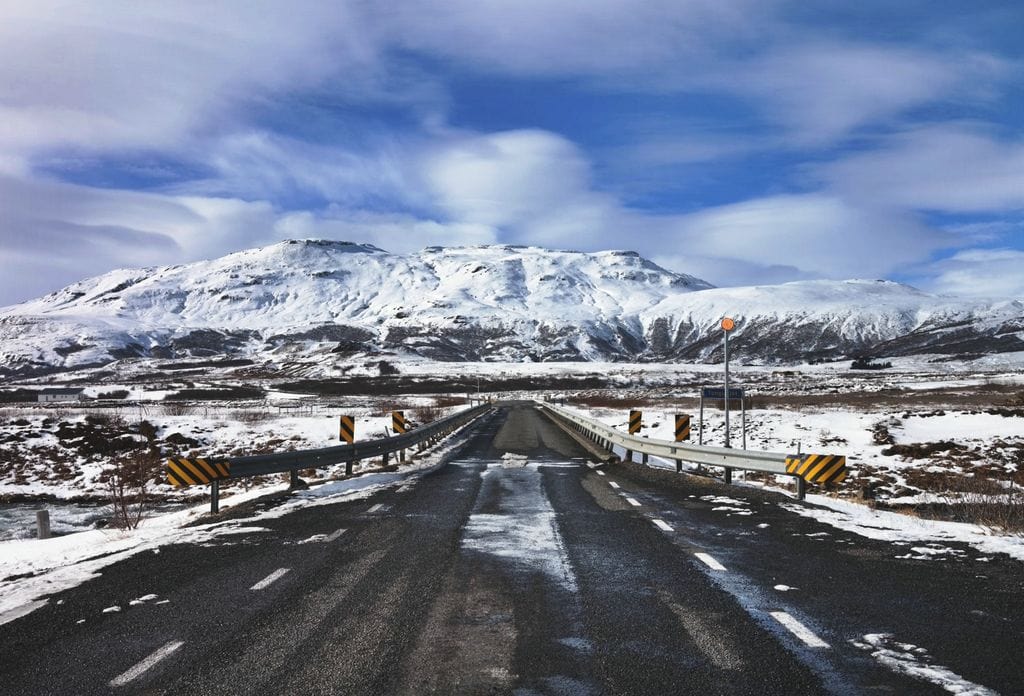 The open road and the only road we know in Iceland.

We had booked a room through Air Bnb and arranged for a free pick up from the smiling Inga in a Volvo estate. As she drove the ten minutes to her house, she told us about her experiences through Air Bnb and the people from around the world she had met with the fast growing phenomenon. Exhausted, we enjoyed our first showers and discovered the sulphuric content of the water in Iceland taints it with a very strange eggy smell. It’s advisable not to wear real gold or silver when you shower, as Shelby found out when her Tiffany bracelet took on a tinge of brown.

Rather than taking one of the many tours to try and spot the Lights, we decided to strike out alone and rent a car.  Sticking to our budget, we went for the appropriately named local company, SAD cars. What they lack in style, they make up for in affordability. Our off peak travel allowed us to rent our 1990s Subaru, four wheel drive, for just 49 euros a day, 15% off for booking in advance. Shelby being from the sunshine state of Florida and my lack of a driving licence made us cautious about icy roads, but if you are not paranoid in snowy conditions, prices go as low as 33 euros per day for a basic hatchback. 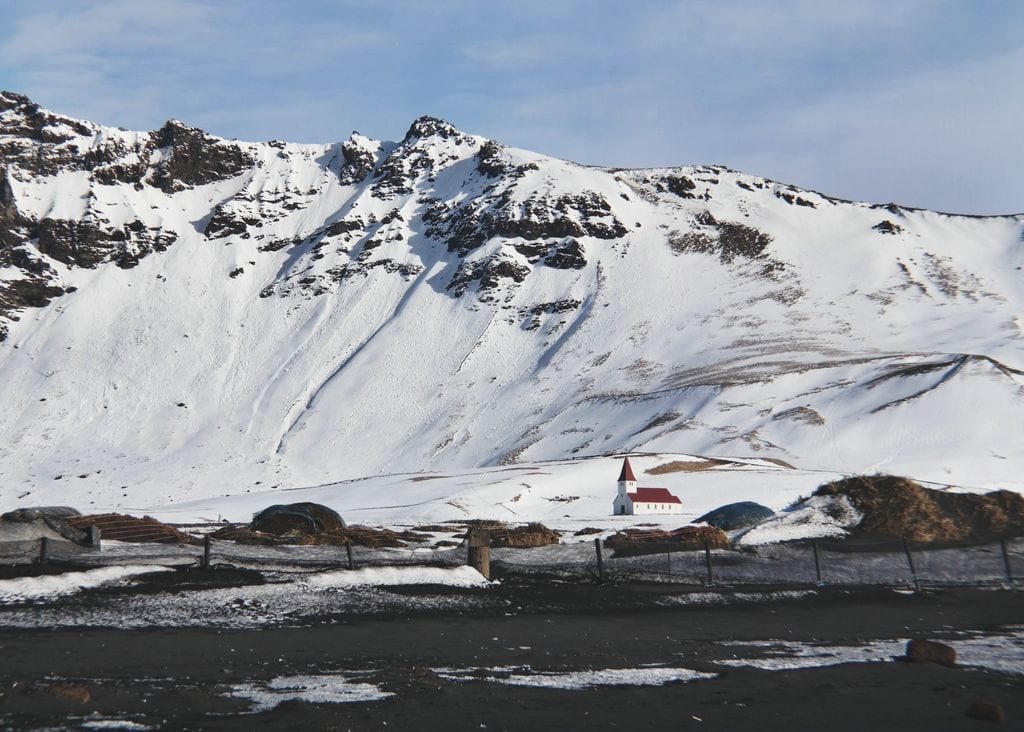 We also decided to rent a Sat Nav which turned out to be a waste of money; in Iceland there is basically one road around the coast and it’s hard to get lost unless you’re driving the wrong way.

Within half an hour of leaving Reykjavik, we were engulfed by a blanket of snow. Visibility was low and everything washed out in bright white. Shelby followed the line of the driver in front, hoping he was a local. This worked until he turned off, nearly slicing a bollard with his bumper. We were on our own.

We were set on visiting the Golden Triangle, a renowned set of three beautiful, natural tourist attractions. Our first stop was Þingvellir, where two tectonic plates diverge causing a crack and a steep rocky valley. Half a foot of snow crunched beneath our feet, faces shielded by woollen scarves against the bitter wind. We joined small groups of tourists at a viewing point to see an astonishing panorama of a great lake below a snowy mountain range. We ventured down through a rocky chasm between a rock and a steep cliff, stunned by the complete silence and tranquillity, all sound blocked by the steep cliff walls; neither of us had ever experienced quiet quite like we did at Þingvellir.

Next was Strokkur, roughly ‘The Churn’, the most reliable geyser in Iceland, erupting every five minutes. Strokkur was busier, noisy and explosive. A gift shop, hotel and car park stand across the road and it costs a few dollars but it’s worth it. We watched as the boiling water started to sway, move, grow and shrink in size, reminding me of a violent wave machine at a swimming pool. This motion increased until it was swirling uncontrollably; finally it shot into the air sending a spray high before it crashed down around us. We watched a few times, each magnificent and completely different. 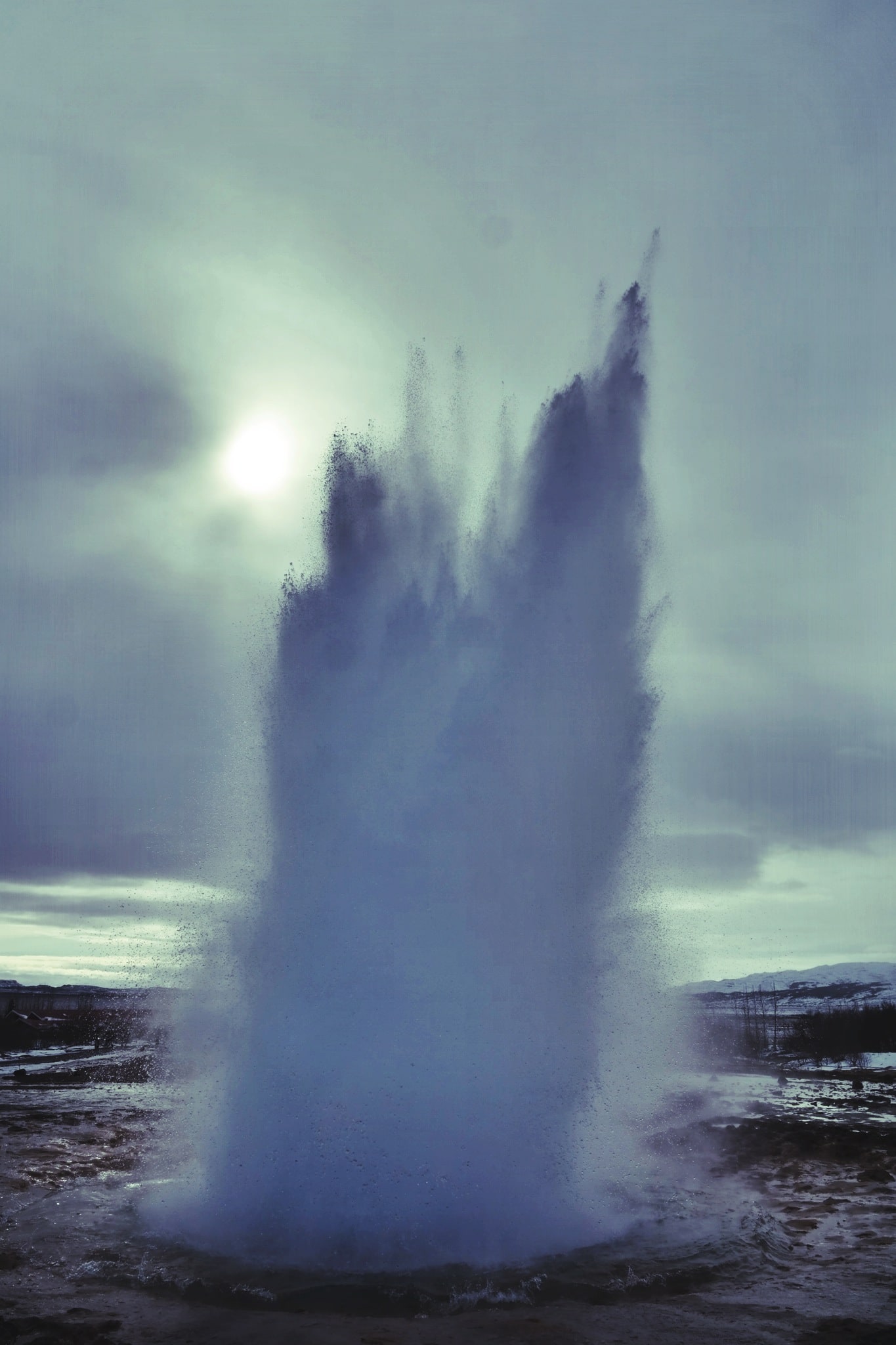 Strokkur blowing its top high in to the air.

The final point was Gullfoss (Golden falls). Busier but still not teeming with people, we looked down over the fall. The most amazing thing about Iceland is when you see one sight that is the most magnificent you have ever seen, you are contented. Then five minutes later you are, impossibly, staring at an even more awe-inspiring view. Gullfoss was truly majestic. A deep valley lay below where a fast moving river cut through the rock. The water felt its way through the valley, worked into the crevasses seeking the easiest path. The closer to the edge you get to look over at the crashing white waves, the louder it is. 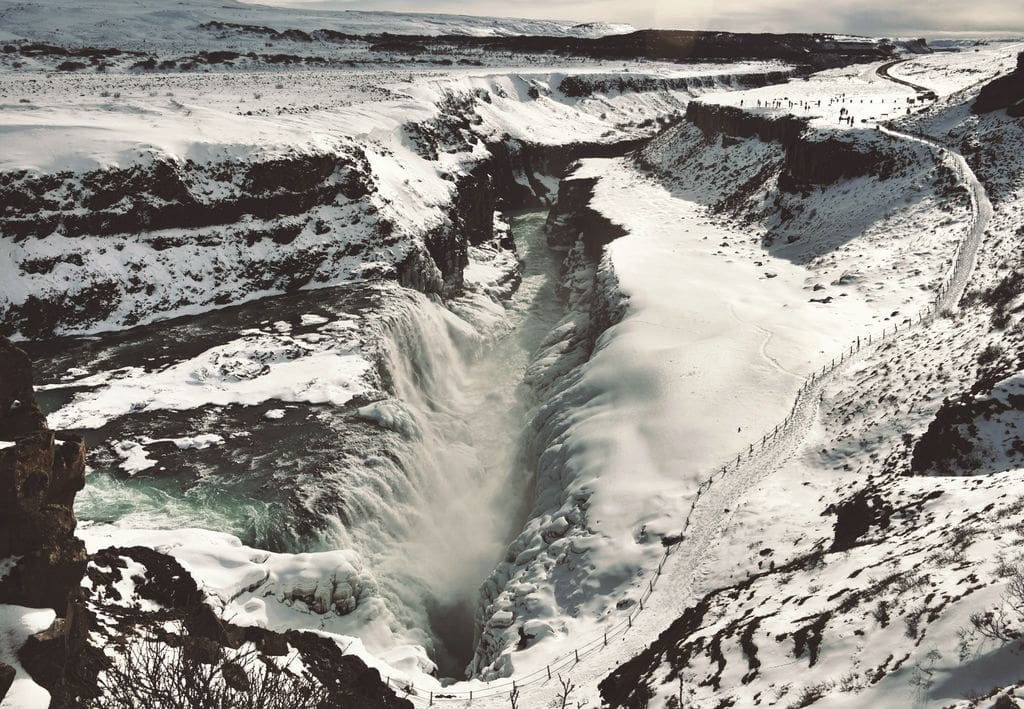 Looking down upon the mighty surf of Gullfoss.

Early in the 20th century, Sigríður Tómasdóttir walked 120km from Gullfoss to Reykjavik in protest over a planned water turbine installation there. The trek was tough, she ruined her feet and was left very sick, but thanks to her efforts the magnificent landmark remains.Knowing somebody cared so much adds to your appreciation.All of the Golden Triangle can be seen in one day and is well worth putting up with the crowds.

Before leaving Reykjavik, we visited a supermarket, buying supplies to cover most meals as we found out a normal hamburger in a restaurant is over 20 dollars. Iceland has to pay huge import rates, lacking its own produce, so by the time the product gets to the consumer it would be cheaper to eat gold, though not as appetising as a burger.

The erratic weather is perhaps more frightening than a constant gale. Every corner we turned, a different landscape. One minute, vast snowy fields with mountains reaching high into the clouds; the next the fields doused in green like a crisp spring landscape painting.

Inga had informed us a group of Australian tourists rented a car and headed out in a storm. Their car was ripped to shreds and they were left huddling for warmth in what looked like a demolition derby entrant. Perhaps not the most uplifting information to give to two people about to make the same journey.  As we continued along the only road we knew, the winds started to pick up and whip through the holes in our SAD car as we rode the storm to Skógar, where we had booked a room in a large wooden log cabin at the foot of a mountain, picturesque and very Scandinavian. It was warm and cosy but that didn’t deter us from heading out that evening on our first hunt for the Northern Lights.

Some minimal Googling led us to websites that gave probabilities of witnessing the lights but even if these websites said there was an 80% clear night sky, there was still a high chance we would not see them. This is what we found in a layby near the log cabin. The time went on and we gave up at around 1:30am, the only lights the occasional passing blinks of fellow tourists on the same search. Patience is a virtue for light hunters.

Our next stop was seaside town Vik, home to a black beach. A beautiful little church looks out over the small town, acting as a beacon. Vik is next to a glacier on top of the active volcano Katla. If an eruption occurred, and scientists suggest one is due, then the hot lava could melt the ice and cause devastating flash floods. The townsfolk run drills regularly to evacuate to the church which would supposedly be the safest spot. 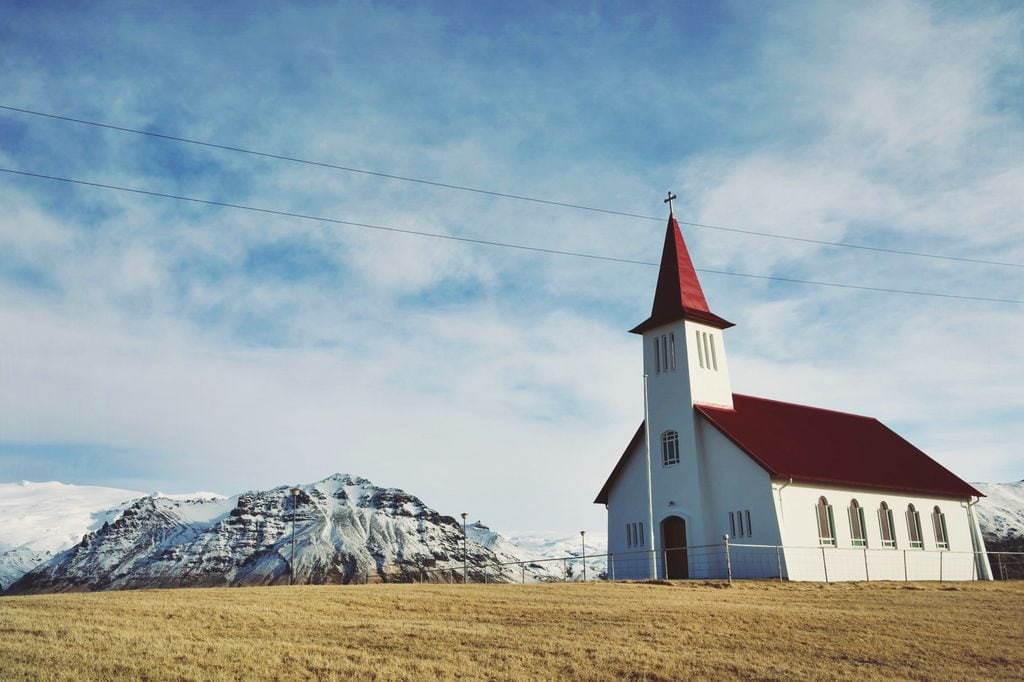 Above is a Church we stumbled across in a small settlement. A lot of the churches, like the one in Vik, use this traditional architecture.

Crunching through the snow we headed to the beach and took a picture next to Reynisdrangar, the strangely shaped sea stacks eerily positioned like crooked fingers out to sea. 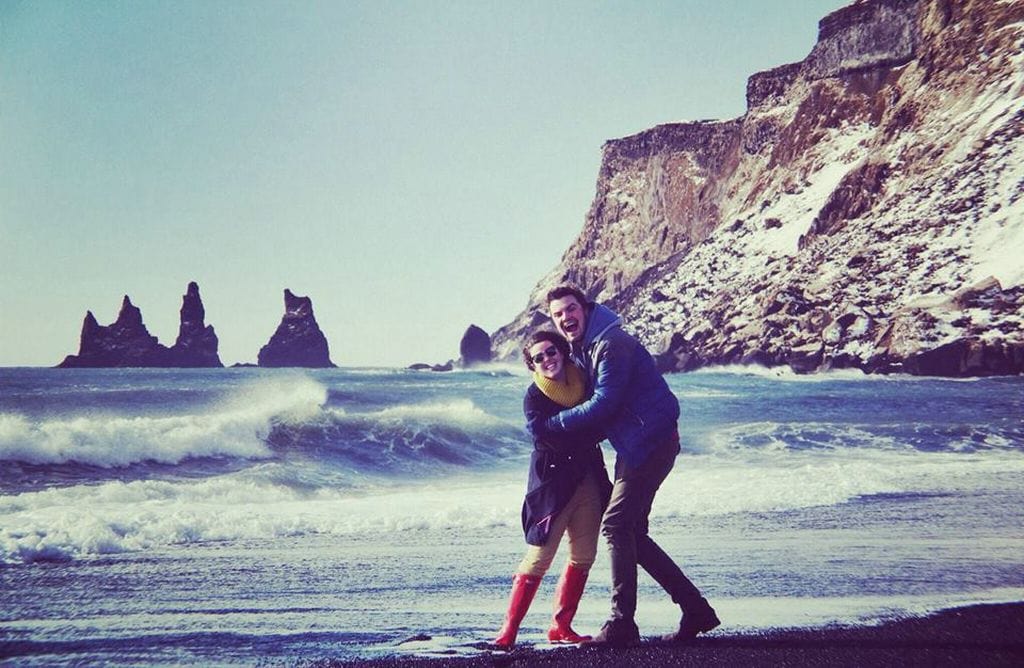 Here we are watching the camera tripod being blown over by the wind and crashing on to the sand at Vik.

We stayed on a horse farm near Hofn, pronounced ‘Hob’ with a view of the coast and farmland covered in reindeer. Brought to Iceland in a mating experiment, their numbers grew far more than scientists intended. Now they can be found all over the island.

That evening, we found a spot at 11pm high on a hill looking out to sea. The owner of the horse farm told us the green lights in a lot of famous photographs cannot be seen by the naked eye. These particular lights appear like a strange murky mist. Only the lens on a camera is strong enough to catch them. True enough, three hours later and all we had was a smudged green image of a cloudy mountain top.

The next day, running out of time, we headed back along the road towards Skógar, turning in to an opening between two snowy mounds. Hidden from the road is the astonishing Jökulsárlón or glacier river. We walked down a hilly footpath covered in snow. For what seems like miles in every direction, iceberg covered water, like cubes in lemonade. The chunks break the surface in every shape imaginable. Again, tranquility. 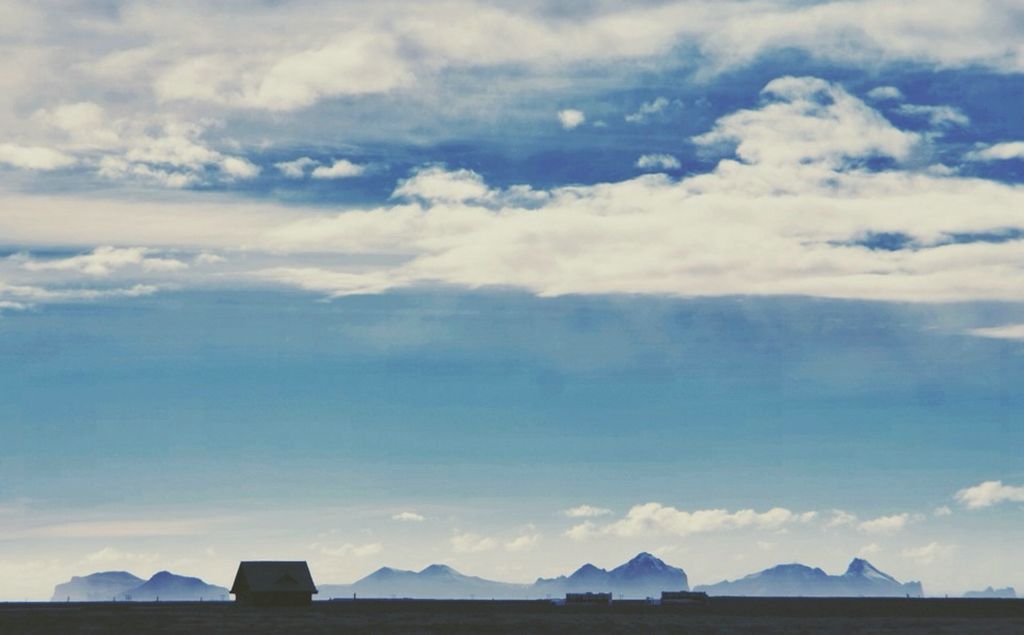 Our final night was spent in Skógar, where you can get behind the waterfall Skógafoss for a different view. Another great experience, and though we never saw the lights, we left Iceland with a warm glow. 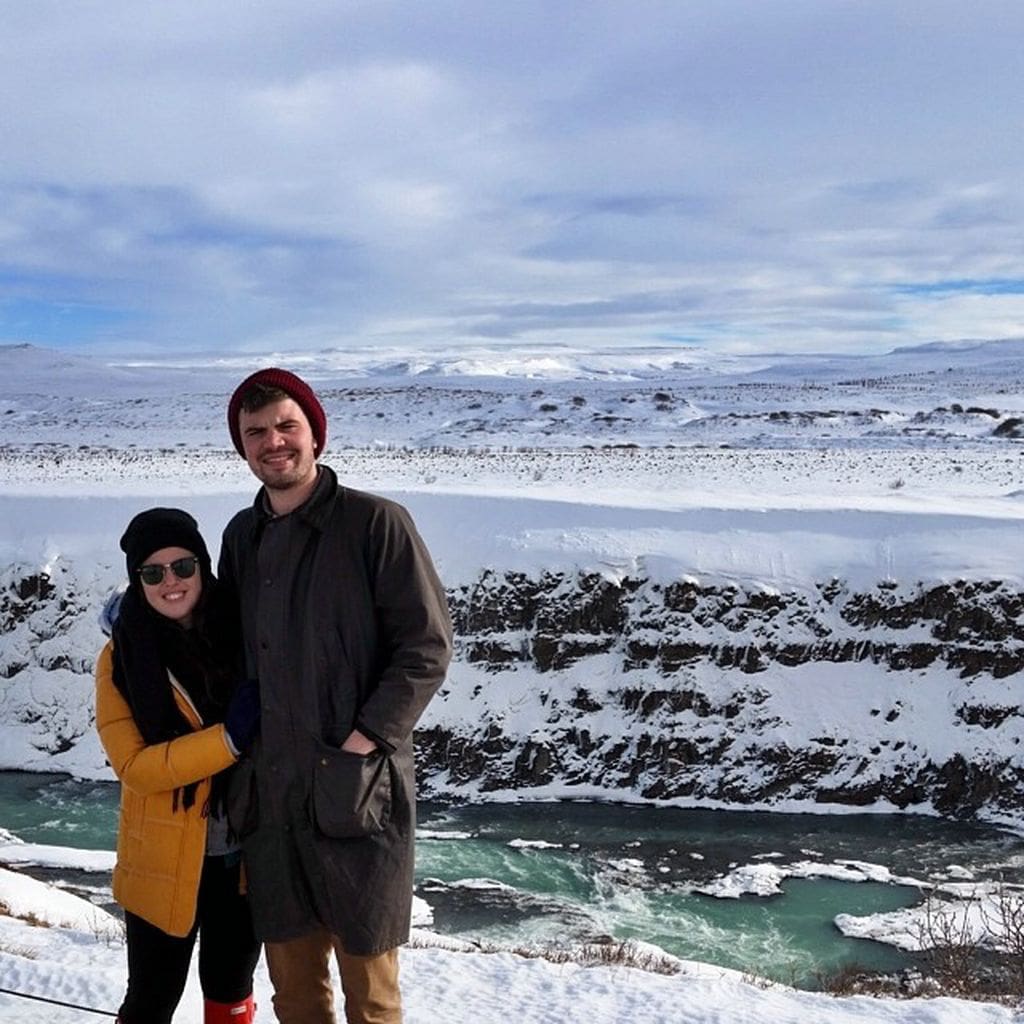