A Complete Guide to Thailand – Itinerary and Travel Tips 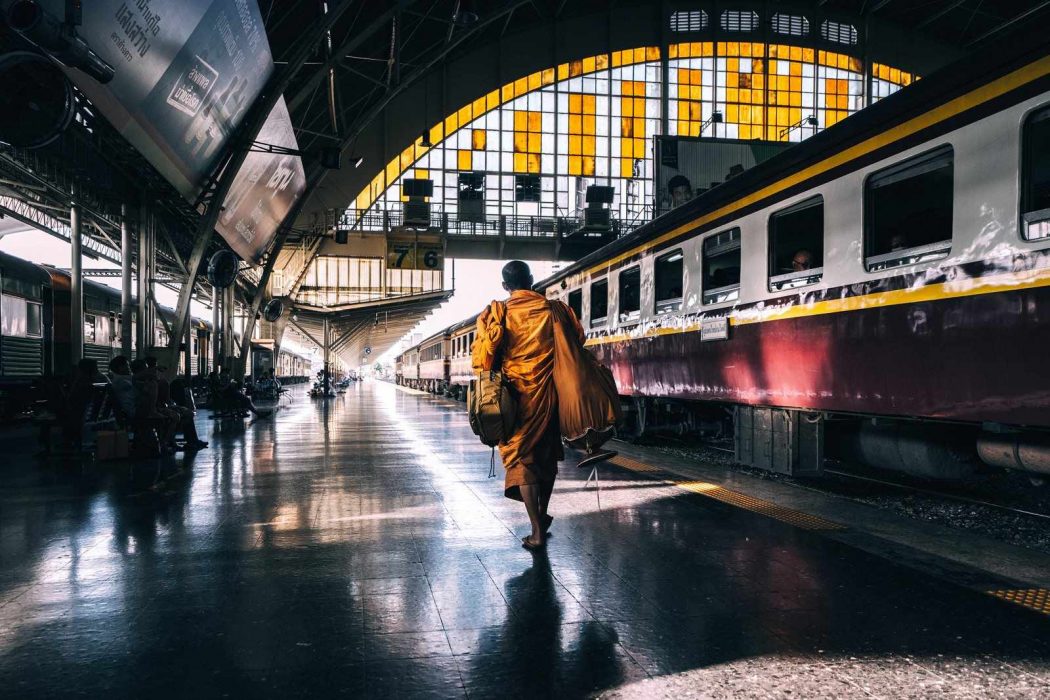 There is a very good reason that Thailand is a well-loved piece of the Southeast Asian backpacking route. The combination of friendly locals, some of the best street food in the world, and gorgeous natural scenery has had people flocking to the country for decades. Keep reading to uncover the perfect Thailand itinerary and a few handy travel tips.

Traveling in Thailand has amenities for every type of traveler. It is just as easy to plan a luxury trip here as it is to backpack on a shoestring budget.

It is also extremely diverse. The Northern part of the country is quieter and less visited than the busy and bustling Southern half. There are forests filled with wildlife, ancient civilizations that still live in remote parts of the country, and beaches famous for their stunning blue waters lined with lush, green mountains.

You can party or chill, sit silently in a retreat, or dance until sunrise. No matter what you like to do, Thailand does it better than just about anywhere else in the world.

Know Before You Go

The Thai Baht is used in Thailand. ATM’s and banks are readily available in all metropolitan areas, though you should plan to pack extra cash when traveling to more remote parts of the country.

$1 USD works out to be a bit more than 30 Thai Baht. Using your credit card will get you the best exchange rate, though some businesses will charge extra if you do not pay in cash.

Prices in Thailand vary wildly. The street food can round out to about $0.50 for a huge and delicious meal while luxury resorts in popular areas can skyrocket well into the $1,000’s per night. Generally speaking, however, the prices in Thailand are very affordable.

Bargaining is expected and encouraged almost everywhere in Thailand. Unless you are staying at a western chain–i.e, a Hilton–try to haggle for a lower price. The given price is structured to be higher with negotiations expected. Be friendly, persistent, and smile, and you’ll be surprised at how easy it is to lower costs.

The primary language in Thailand is Thai. However, due to the thriving tourism industry, English and other foreign languages popular with tourists are widely spoken. Learning a few, key Thai phrases will go a long way towards connecting with locals and helping you with your bargaining.

The peak travel season in Thailand, also known as the dry season, is from December to April. This is when the weather is best but the prices are highest. Keep in mind, however, that it is a large country and the climate can vary depending on where you are visiting. The rainy season starts and ends at different times between the Eastern and Western islands and the Northern and Southern halves.

When you go will all depend on what you are looking for. For budget travelers, note that the prices are highest during the peak season when the crowds are the largest. If you want solitude and to share the sites with fewer tourists, visit during the rainy season. And, if you want to ensure you have the best weather, visit during the months of December to April.

Entering Thailand as a tourist is fairly simple. If you are visiting the country for 30 days or less like a U.S. citizen you do not need a visa. Although other requirements may apply if your intention is, for instance, working as a teacher in Thailand for a while.

Other countries may require one too, it varies from location to location. In addition, if yellow fever is prevalent in countries you have visited recently you may need to show proof of vaccination in order to enter the country. You can get into Thailand by land and boat from bordering countries or via one of their international airports.

The rise of modern Thailand is said to have started in the late 1700s when the dynasty began that still rules to this day. Bangkok was formed as the capital, and King Mongkut embraces modern ideas in the 1800s. Until as recently as 1939, Thailand was known as Siam.

In the centuries since, Thailand’s stability has ebbed and flowed with wars and the changing of governments. Control of the country has fluctuated between elected government, military control, and the reigning monarch.

The country has seen its fair share of struggles. It was used as a platform for the Japanese in World War II and the U.S.A. during the Vietnam War. In 2004, thousands killed when a Tsunami hit the coast and the islands, wiping out entire communities.

In 2016, the beloved King Bhumibol Adulyadej died, ending the longest reign of a monarch in the world. That same year, voters kept the military in control of the government. The Thai military is still in power today, though the country has enjoyed relative political and economic stability in recent years.

How to Get Around

Getting around Thailand is cheap and easy. There are trains, buses, planes, and boats that all have routes serving the country.

Bangkok has a great public transportation system. Made up of buses, a sky train, a subway, and plenty of cabs and tuk-tuks for hire on the streets, you won’t be stranded anywhere for long. It’s also a walkable city, with many of the tourist sites and areas easily accessed on foot.

If you’re comfortable with it, you can also rent a motorbike or car, though note that traffic accidents in Thailand are extremely high. Be cautious when driving, accidents are no joke.

It’s easy to find accommodations in Thailand to fit any budget or travel style. In major cities and resort areas expect to find western chain hotels in addition to the local hostels, guesthouses, hotels, and rentals.

If you visit more remote parts of the country, you may be limited to renting a room in a local home or simple guesthouses. Camping is also widely available in natural areas.

Take the bus, train, or fly into Chang Mai. This spiritual city in the North is a hotspot for tourists. It is small, easy to navigate, and filled with beautiful temples. The food and culture in Northern Thailand are completely different from that of the South. The chill vibe, cheap cost of living, and easy access to nearby countries and the rest of Thailand have also made Chang Mai a popular expat spot.

In spite of its small size, there is so much to do here. Sample the local street food, like stewed pork legs and Chang Mai sausage. You can visit any of the temples woven throughout the city streets that are open to the public. If you’re lucky, a monk may even stop to show you around and practice their English with you.

Once you’ve had your fill of the city in Chang Mai, take some time out to visit one of the nearby elephant sanctuaries. Be careful with how you choose this spot, not all sanctuaries are formed with the animal’s best intentions at heart. A few things to note when researching where to go: make sure the elephants are not ridden ever, in any setting, ask the locals to see which organizations give back to the community, and read reviews to see what actually happens on site. Whatever you do, do not ride the elephants! It hurts their backs and greatly shortens their lifespans.

The Elephant Haven has been around for a long time and has a good reputation amongst travelers, though there are plenty of people who don’t like how heavily the elephants are forced to interact with tourists.

Even better, seek out a tour where you can trek into the wilderness to spot the animals at a distance in their natural habitats. Hire a local guide to support the local economy, and you’re on the right track for how to best support elephants in Thailand.

A small town on the River Khwae a couple of hours West of Bangkok, Kanchanaburi has become a popular stop-off in recent years. The addition of another Elephant Haven outpost brings in more visitors, but it’s more than just that.

In fact, the best part about Kanchanaburi might just be that it happens to be a sleepy little riverfront town. The few hotels open up to water views, the restaurants are mostly local, and the streets are tiny.

Rent a bicycle for around $1USD/dollar and tour around the town. If you’re feeling especially ambitious, ride the bike up to the Tiger temples in the hills outside of town.

Thailand’s capital is a huge, modern metropolitan city. The bustling city acts as a transit and business hub for Southeast Asia, has a large expat population, and is easy to become immersed in. Bangkok is an old and beautiful city, with the oldest, and possibly most famous of the cities temples–Wat Pho–dating back to the late 1700s.

With over 40,000 temples inside the city, there is no right or wrong way to explore them. Seek them out based on your interests. The giant reclining Buddha statue and Wat Pho are likely to be some of the busiest, but you can easily stumble into a gorgeous temple tucked into a side street that most tourists have never even heard of.

Don’t be afraid to try the food in Bangkok. The street and fine dining scene here is some of the best in the world. Streetside stands and luxurious restaurants alike have won international acclaim and awards. Contrary to popular belief, street food is as safe as it is affordable. Stick to the most popular stands, especially those with lines of locals, and you will probably be fine.

Located even further North past Chang Mai is the smaller city of Chang Rai. It is a bit more challenging to get to, but tourists who are willing to make the trek are rewarded with a beautiful city to explore. Wat Rong Khun, or the White Temple as it’s known to most foreigners, is the biggest draw here. Many people opt for a day trip here, though there are plenty of other temples and attractions to make it worth stopping at for multiple nights.

The Thai islands might be the most famous part of the country for tourists. They’ve been featured in movies – a great way to enjoy Thailand from home by the way! – for decades, highlighted as a backpacker, party, and more recently digital nomad haven where time no longer matters and visitors may never leave.

Each island is different, with its own vibe and offerings. Some have better beaches, others have a quieter nightlife, while others are huge party hubs with large crowds and resorts. There are islands that can still be traveled on a budget, though that has become more difficult with their ever-increasing popularity.

In spite of the crowds you will likely find here, the incredible beaches are worth spending time at. If you scuba dive or snorkel, the oceans surrounding the islands here are teeming with wildlife. In the nearby hills, hiking trails wind through lush green forests. There is so much to see and do. If you’re able, spend some time island hopping to get the most out of your time here.

What else would you add to your Thailand itinerary? Let us know in the comments below.

Hi! We're Joe and Alicia, the couple behind Miles Less Traveled. Follow us around the world while we sample local eats and take in as much adventure as we can!