New York city or ‘The Big Apple’ is synonymous with the familiar Statue of Liberty and the equally famous, if not more Manhattan skyline. 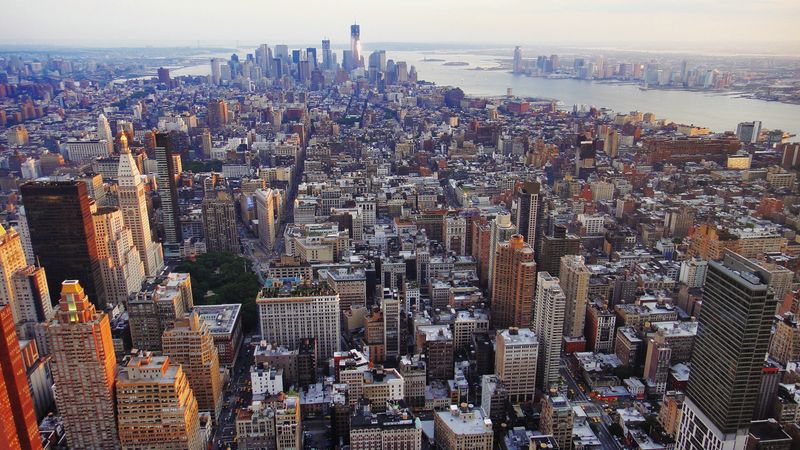 A city known for its vibrant life, culture, and boasting of the brightest and the best. A place of opportunity and diversity.

Of course, there is the ubiquitous Times Square, Rockefeller Center, and Central Park. In the urgent schedule of the eager tourist trying to include the must-dos in Manhattan, one completely misses out the charming and equally diverse attractions of the four other New York City boroughs, namely Queens, Brooklyn, Staten Island and The Bronx.

Here’s a quick intro to the usually forgotten NYC boroughs:

Having the largest area among the 5 boroughs of New York City, Queens has some unique experiences to offer the discerning traveler. 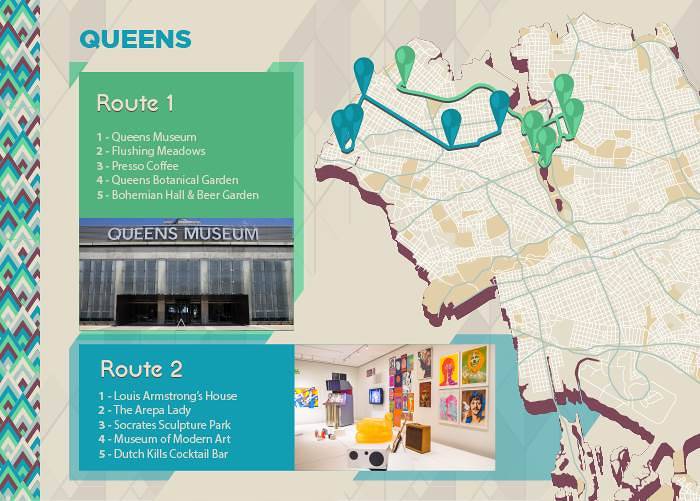 You may start with a ‘flavors of Long Island’ city tour and get a feel of the culinary offerings of this culturally diverse borough.

While at it, do not miss the Arepa Lady, an eatery which serves cheesy Colombian cornmeal cakes that are simply heaven.

Or if exploring the city with a minimal carbon footprint is your thing, then you could find your way about a cultural bike tour.

Without the crowds of Manhattan, but equally attractive are Queens attractions like the City Field and Flushing Meadows-Corona Park.

This borough also has some of the best NYC museums. Established in 1971, the ultramodern Queens museum has garnered popularity – while there, a must-see is the 1964 ‘Panorama of New York’ model of the 5 boroughs that form New York.

You could wind your tour with a romantic afternoon at the Rockaway Beach, known for sunbathing and surfing.

A close cousin of Manhattan, ‘artisty’ Brooklyn is more than just the well-known Brooklyn bridge. 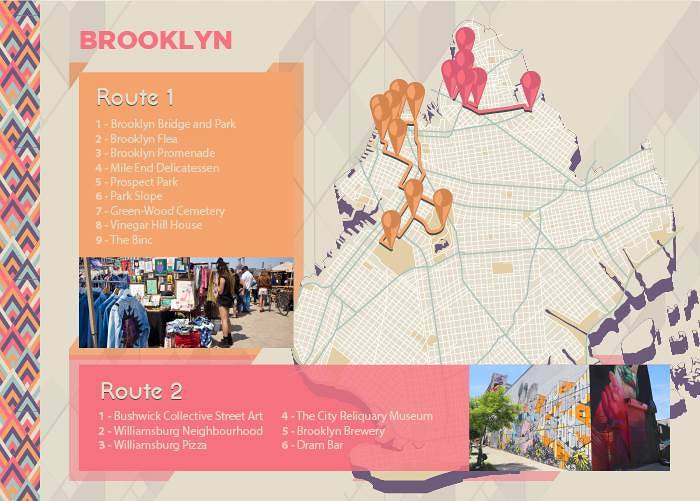 A guided walking tour (or running tour if you are up to it), to explore the architecture of the bridge is a must-do, shore up your itinerary with a few things that ‘only Brooklyn offers”.

Make sure that you visit Judy Chicago’s ‘The Dinner Party’ featured in the Elizabeth A. Sackler Center for Feminist Art. And once there, have a careful look at each one of those plates which pretty much remind of a powerful part of the female anatomy.

Listed as one of the ‘cool’ things to do while in Brooklyn, do not forget to check out the New York Transit museum in downtown Brooklyn to get a mind-boggling historical feel of public transportation and mass transport system.

With its smorgasbord food stalls, local products and truly vintage shopping feel, the Brooklyn Flea Market would satiate your shopping with far less burden on your purse and a lot more romance.

And, if you have not had enough of parks in the other New York boroughs, head out to Prospect Park, where you might just enjoy one of the free concerts playing along.

After the feverish pitch of Manhattan, Staten Island’s verdant green spaces offer you tons of things to see, do and explore. 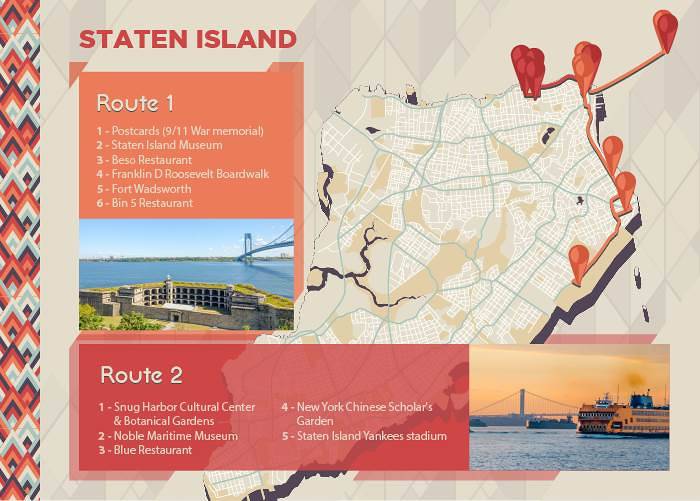 Get off the beaten path, and grab a round of golf at the La Tourette Park nestled over 455 acres of parkland.

You will also get a fantastic view of an 1870s historic clubhouse near at the 14th hole.

On the popular tourist trail will be Richmond Town, a preserved village from the 17th century featuring costumed tradesmen showcasing period skills and crafts.

For an altogether different experience, head out to the Jacques Marchais Museum of Tibetan Art. Surrounded by beautiful gardens for meditation, this museum has the unique distinction of being a rare Himalayan temple structure in the United States. It also features one of the largest collections of Tibetan artifacts in the West and holds a festival every October, if you happen to be there at that time.

And if large ferries are not your thing, try exploring Staten Island in a uniquely distinct way – by kayak. You can team with Kayak Staten Island, an all-volunteer group to visit major attractions such as Alice Austen House and Midland Beach. 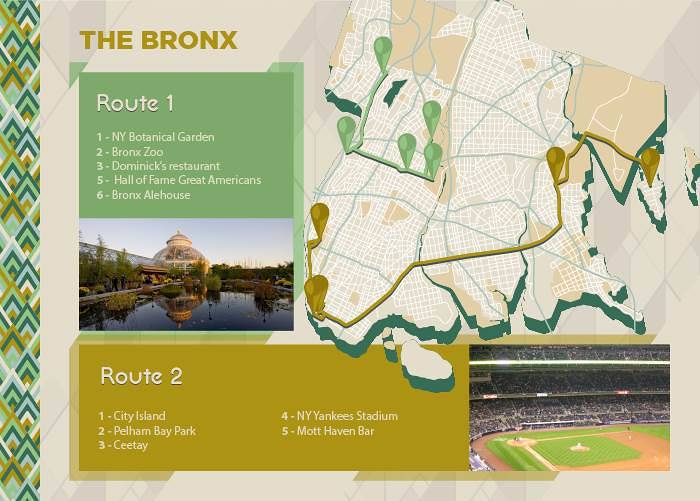 Probably the least explored among the four boroughs in tourist terms is The Bronx. That, however, does not in any way rob it of its myriad attractions.

You have not really visited the Bronx if you have not been to Arthur Avenue and sampled at its truly Italian restaurants and bakeries.

Then head off to the home of one of the most successful teams in US baseball history – The Yankees. Better still, watch a game if you can – and well if they win, you can expect to hear Sinatra’s ‘New York, New York’ and get swept along with the frenzy – never mind whether you are a Yankees fan.

If you are a plant lover – make sure to visit the New York Botanical garden, a massive 250 acres of ancient trees and variety of flora.

And for a bit of warmth and good company, step foot into The Bronx brewery for delicious ale. You can just enjoy the staggering array of flavors in the specialty ale, or play one of the available games on an outdoor picnic table.

And yes – we’ve been talking about a lot of museums, but this is New York, right? For a different perspective, head out to The Bronx Museum of Arts, which was established in 1971 and features artists of Asian, African or Latino ancestry.

For more ideas on things to do and see in the lesser-visited boroughs of the city, have a look to this guide to New York beyond Manhattan. The piece features mapped and written routes through The Bronx, Brooklyn, Staten Island and Queens, detailing the best places to sightsee, explore, eat and drink, all achievable in a day.

So the next time that you visit New York, think beyond the Empire State Building, its bustling boardwalks, and Wall Street Skyscrapers. Re-invent the typical tourist guide to the city and make sure that you devote a day each to these four different boroughs.

There’s plenty to see and do, more importantly, an experience to take back. For a complete and satisfying New York experience, make sure that you visit all the five New York City boroughs and live its smells, sights, and sounds – if only for a day!