Experience Greece in all its glory by driving around the country in 2 weeks with this road trip itinerary. 7 stops, endless fun.

While many people think of Greece as the ultimate island destination, with Mykonos and Santorini headlining honeymoon itineraries, it’s also a fantastic road trip destination. The mainland of Greece, from Athens to Thessaloniki via Meteora, Delphi, or the Peloponnese, offers up an amazing array of unique stops.

Below is the ultimate 2-week Greece road trip itinerary, beginning with the mainland and ending on the islands. Begin your ultimate Greece road trip in Thessaloniki. You can fly into here from most cities across Europe or connect in Athens.

Thessaloniki, in the north, is Greece’s second-largest city and the capital of the Greek region of Macedonia. It was founded as a Roman city in the 1st century BCE by Cassander of Macedon. Under the Byzantines, the city flourished and was the second largest and wealthiest city in the empire.

Today, Thessaloniki is considered Greece’s cultural capital, with yearly art and film festivals. It also features numerous Roman and Byzantine ruins, plenty of street art, and has been named as one of the best mid-size European cities.

What to see and do in Thessaloniki

Insider’s tip: To make the most of this road trip itinerary, rent your car after exploring the city and before moving on to the next destination on this itinerary.

From Thessaloniki, drive around Halkidiki, which comprises three peninsulas on the northeastern coast. It is the birthplace of Aristotle.

The three peninsulas of Halkidiki are known as Kassandra, Sithonia, and Agion Oros:

Halkidiki is also known for its beaches, thermal spas, mountain villages, and the monastery of Mount Athos.

Top 3 things to do in Halkidiki

From Halkidiki, drive south to Meteora. Meteora is located in the Plains of Thessaly and is home to six Eastern Orthodox monasteries, all built on top of natural sandstone pillars.

The earliest monasteries were built around the 14th century, though there is evidence for human settlement as far back as 50,000 years ago and evidence of monks living there from the 9th century. The original access to the 24 monasteries was only by ropes or ladders that could be removed, for security.

Today, it is easier to visit the monasteries, as there are now staircases built into the rock. There are only 6 monasteries remaining.

What you cannot miss in Meteora

After leaving Meteora, drive to Delphi, home to the ancient Oracle and today an incredibly impressive set of ruins. Once considered the center of the world, and marked with a stone called the omphalos (navel), Delphi is notable for its importance to Ancient Greek city-states and there are many monuments built by the various governments. For this reason, it is a UNESCO World Heritage Site.

What is Delphi famous for

Delphi is only a few hours north of Athens, which is your next stop. The capital of Greece is one of the greatest capital cities in history. Early settlement dates back to 1400 BCE, while evidence of humans dates back to between the 11th and 7th century BCE.

Today it is a sprawling city that blends the ancient and modern and is a must-see on your ultimate Greece road trip.

Insider’s tip: Return your rental car here before exploring, you can explore the city using its public transport network and on foot.

From Piraeus, the port of Athens, take a ferry to Mykonos. This takes around 2-5 hours depending on the ferry but can take up to 24 hours if you take a slow boat.

Mykonos is quite possibly the most famous of the Aegean islands and a paradise for everyone from celebrities to backpackers. Hora is a vibrant town where you can spend both time and money in the many designer boutiques or hip restaurants.

The island of Mykonos is well known for its sunsets and parties, but it has a quieter side too. You can rent a car or scooter to get around Mykonos, and this can be done on arrival.

Best things to do in Mykonos

Editor’s tip: Once you are done with the Aegean sea, why not keep exploring the Mediterranean with an Adriatic sailing adventure? There are over a thousand Croatian islands waiting for you!

Take the ferry to Santorini, one of Greece’s most well known and popular islands. This will take around two hours. The glimmering whitewashed buildings of Fira (Thera), Oia, and Imerovigli look out over the sea and provide incredible – and very romantic – sunset views.

Spend a few days here to explore the island’s east coast, visit the many wineries, and enjoy the rich history and landscape. To get around the island, rent a car in Fira.

What to do and where to go in Santorini

Greece is a great road trip destination, even on the islands.

Using this ultimate Greek road trip itinerary, you will experience the best of both worlds. Enjoy!

Chrysoula is a travel blogger born and raised in Athens with a professional background in Tourism and Marketing. Through the pages of Athens and Beyond, she wants to help visitors make the most of their trip to Athens and show them how to navigate the city like an insider. 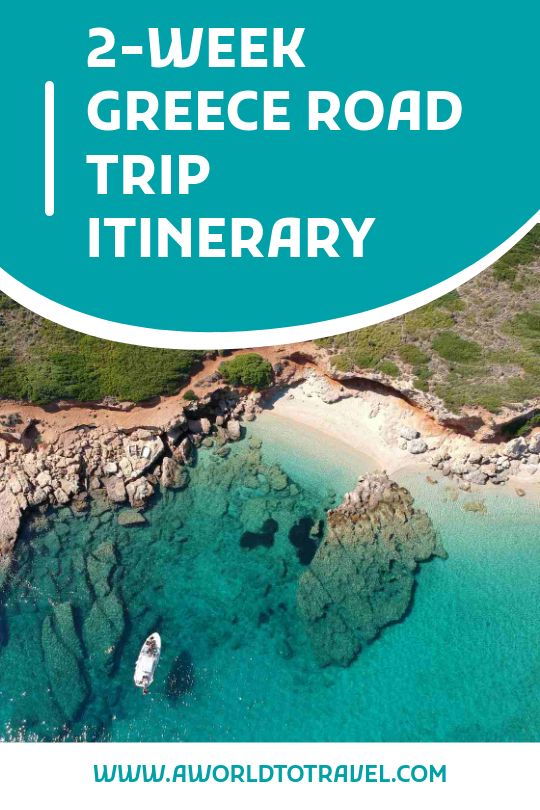