17 Fishing Destinations Around The World You Should Visit Soon

Fishing in the backcountry seems like a pretty average thing for most folks, but most of us also have dreams of traveling the world and experiencing a range of different fishing adventures.

Luckily, the digital age has made it super easy for us to find places across the globe where it’s ideal to cast our lines in the water. We know you’ve got some great destinations and fishing adventures written down on your bucket list, but take a look at the spots we’ve put together, consisting of 17 different international fishing holes, all considered some of the world’s best! 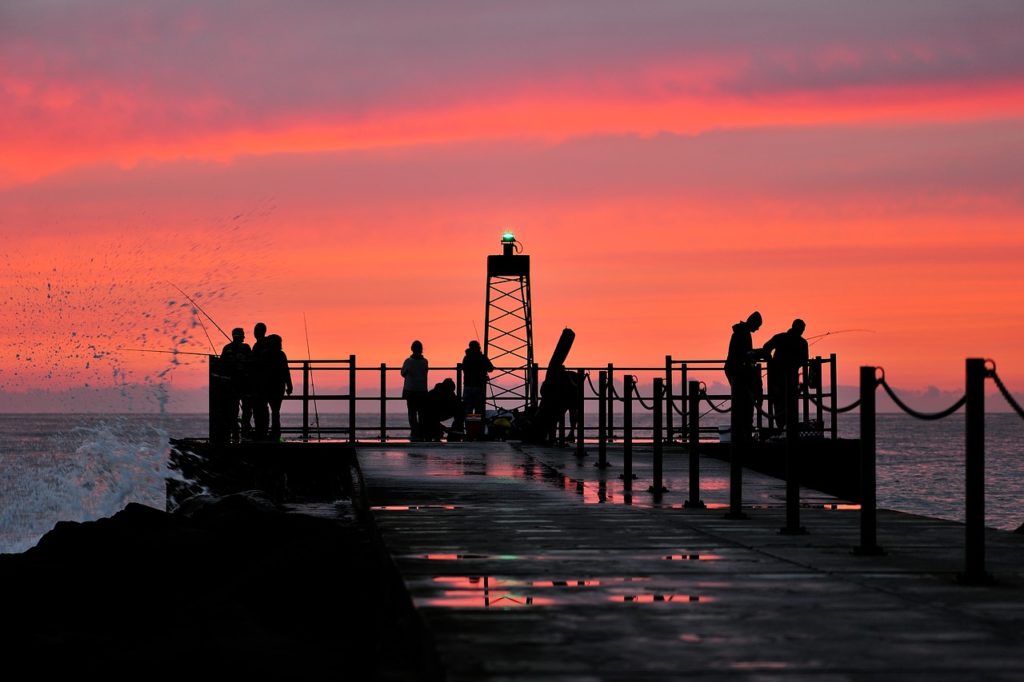 The Big Apple might be the city that never sleeps, but it’s also where you might just ace your chances of catching a huge variety of light-tackle species. Although the fishery season is seriously short, it’s on like Donkey Kong during the month of September and October.

Bay anchovies lure the stripes into the long tidal strips near the shoreline, which is both a stunning sight and a wonderful fishing opportunity. Look out for bluefish little tunny, fluke, and even weakfish in these waters.

Hunters looking to reel in some Pacific sailfish should definitely consider paying a visit to the iconic waters of Iztapa, Guatemala. The peak season for game fishing here runs from November through to April, averaging about 20 to 30 releases per game boat per day.

The shoulder season is as rewarding; in fact, the blue marlin run is an opportunity you’ll get to opt-in for during the months of April, May, and June. Expect to be blown away by the sight of the yellowfin tuna schools taking over the waters from January through to June.

Come on, who doesn’t want to go to the Bahamas? Great Abaco lies at the northern tip of the island, and it’s one of the best spots to travel to if you’re looking to line up a variety of species. Superior angling opportunities await avid fishermen here, and the opportunities seem to be in plentiful supply, allowing anglers to cast their lines in the deep blue sea, the reefs, or even the flats.

If you’re keen on trying your luck with the white marlin run, make sure you head over to the island nation between April and May. After that, the blue marlin run peaks at the beginning of July, this is also a great time to hunt for yellowfin tuna or black-fin, since they migrate through these waters annually.

So it might have seemed a little more idyllic if we listed the Italian version of this spot, but if you’re a redfish angler, you know all too well what great opportunities are on offer in Venice, Louisiana.

But Venice is not just for redfish fanatics, it’s also a good spot to try your luck at pulling out some spotted seatrout, black rum, and even flounders, which can be found in the bayous and abundance of marches in the area.

Marlin hunters know that the Caribbean’s waters are where marlins like to go when they feel homesick, which is exactly why you need to get there, STAT, if you ever want to jot that experience down in your “done and dusted” list.

Punta Cana is ideal for this since you’ll be able to board a game boat between the months of April and July. Another regular occurrence is the Sailfish which can be seen from time to time. Don’t despair, though: there is plenty of fish in the sea, and you’ll probably catch some billfish strikes, wahoo, or tuna, which are available by the dozens.

Island paradise and fishing experience that’s to be had nowhere else on earth, that’s about what sums up Belize’s fishing holes. On offer here are bonefish, permit, and tarpon in abundance, just waiting to be reeled in.

You probably won’t catch a trophy in these waters, but when it comes to thrilling slams, Belize is in a class of its own. Head here during the midsummer or late fall if you’re keen or catching the bigger tarpon, but keep in mind that year-round fishing is totally doable in Belize.

Most folks tend to think of Kenya as a country best known for its tall locals and dry, desert-like landscapes. Enter the waters of Kenya’s central coast, Malindi, where billfish royal slams are a very real possibility.

To complete the experience, you’ll need to hunt for blue marlin, black marlin, sailfish, swordfish, striped marlin, and blue marlin. Throw in a shirt-bill spearfish and you’d have completed one of the best experiences to be had in these parts of the world.

Catching some seriously big fish in the idyllic waters of Panama seems like heaven for us, and we’re betting you might just feel the same/ the offshore seamounts together with Panama’s wild coastline and reefs make it one of the best fishing spots on earth!

Be on the lookout for the massive tuna schools around Zane Grey Bank. You’ll also be able to try your luck with some Mahi and wahoo. Year-round fishing is possible in Panama, but you should know that things get very wet during the rainy season, so plan your trip accordingly.

Aside from the fact that charter captains can be found just about everywhere in Key West, one of the top reasons we love this spot so much is because it offers some serious variety of fish to be reeled in.

Year-round fishing with ice fishing gloves is a reality when you’re exploring the open waters of Key West, which means that the game here includes trying to catch some yellowfin tuna and even blue marlin. Key West is good for both shoreline fishing and deep-sea excursions, so whatever makes you tick will be waiting for you upon your arrival.

While Cabo San Lucas might be best known for its bars and street parties, it’s also a perfect spot for some blue-water fishing just offshore, putting anglers in reach of catching an abundance of fish!

Just a few miles of running and you’ll be able to get your lines in the water with the hopes of hooking some marlin, wahoo, sailfish, and Dorado. Cabo San Lucas is a year-round fishing destination, although the hottest part of the year (May through July) is when variety and abundance are best experienced in these waters.

Located just south of Alaska, at the northern tip of Canada’s spectacular Haida Gwaii you’ll find the islands of Graham and Langara. The waters here offer fabulous fishing adventures and happened to be some of the North Pacific’s most productive fishing grounds.

To get to one of the fishing resorts you’ll have to fly in, but it’ll be worth all the effort once you feast your eyes on the endless schools of salmon in the waters. Other species available here include massive chinooks and Pacific halibut.

Most of the light-tackle and fly-fishing techniques we use today were perfected here in the ’80s by some of the top game-fishing captains of the world. The waters of Puntarenas offer an abundance of fish species to be reeled in.

The most productive months are from January through April, peaking again during November and December.  Yellowfin tuna can be caught all year, with roosterfish season running from June through September a little closer to shore.

Cancun is about so much more than just the beach parties and abundant beach resorts: it’s also where you’ll have some of the best opportunities for reeling in a massive sailfish. The peak season for sailfish runs from March through May, but the light-tackle and fly-fishing enthusiast also have plenty of shots of hooking up.

Cancun’s waters are best known for its dolphin (not the mammal), black-fin tuna, and of course, wahoo, which are found near the deep banks and reefs. You can also try your luck at the flats around Isla Blanca as you cast your lines with the hopes of scoring some baby tarpon, bonefish, and sea-trout.

Cuba is becoming more and more accessible to the rest of the world, and we’re glad because it means that the masses can finally get to explore some of the world’s best fishery waters. Jardines de la Reina is a group of islets that allow anglers to gain access to the pristine flats of Cuba’s southern coast.

Make sure you cast your lines to reel in some bonefish, tarpon, cubera snapper, and permit. Anglers can choose between tackle or fly-fishing, and lodging is done on the water with a yacht.

When you’re fishing the waters near the Galápagos Islands of Ecuador, you have a pretty solid chance of finally hooking up that striped marlin, which is what mainly dominates the waters here.

The waters here are some of the world’s most fertile, making it a perfect spot for anglers to get up close and personal with species such as yellowfin tuna, massive marlin, dolphin, and wahoo. Year-round fishing is what you can expect from the Galapagos waters, but if you’re set on joining the action of the striped marlin run, make sure that you get there during February through June.16.

Heads up tuna hunters: Prince Edward Island calls your name! Located in Eastern Canada, this is where the world’s biggest blue-fin tuna was caught in 1979, and today, you’ll be able to more than match that thrill. What’s more, is the fact that you’ll probably have one heck of a stand-up battle too!

The fishing here is done whichever way you need to, whether that’s live, chunked, or a whole fish as bait. Keep in mind that this area is marked as a catch-and-release fishery, although some boats are permitted to keep a few fish each season. Deep-sea fishing is highly popular in PEI but the Maritimes, in general, has lots to offer so you can also take a more casual approach and fish for more familiar species like bass.

Though we might never be 100% sure about exactly how many species of marine life call the Australian Great Barrier Reef home, one thing is sure: it’s a spot that will leave you forever changed as an angler!

It is said that up to 70% of the world’s black marlin catches originate from the waters of Cairns and Lizard Island. The peak season for the black marlin run is from September through December. You’ll probably hook some wahoo or dolphin during the process as well since you’ll need big bait along the lines of tuna, mackerel, and rainbow runners!

Would you add any destination to this list? Let us know in the comments below!