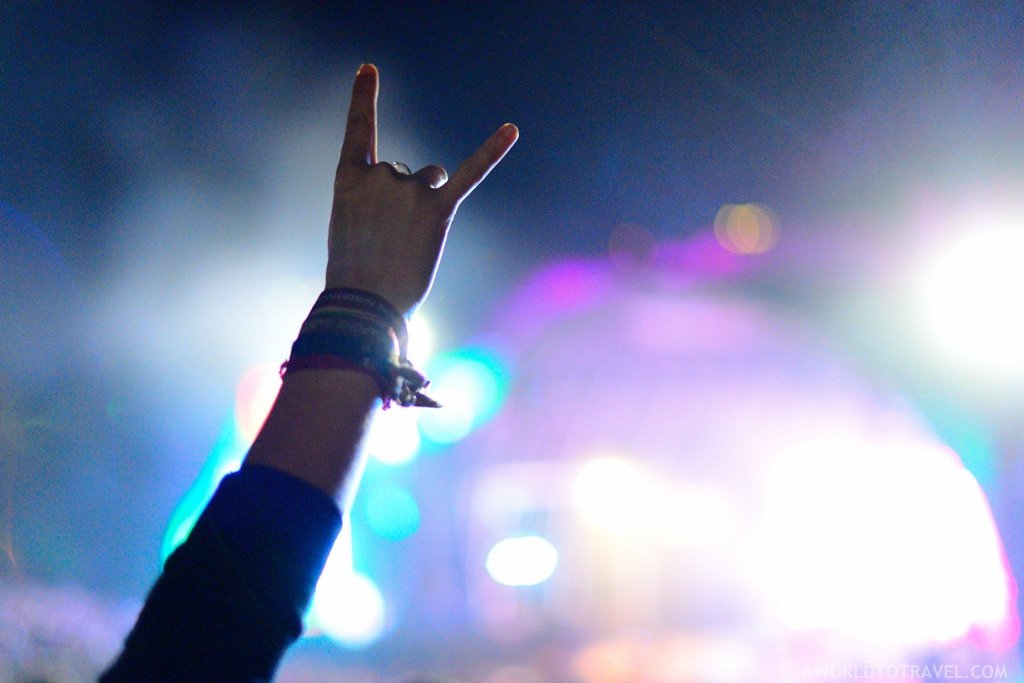 Sunrise in Paredes is truly a sight to behold. I know that view really well now. After two nights with little-to-no sleeping, the smokes just flew past me as the sky changed colors. I was half the person I used to be, both mentally and physically: I was destroyed.

Even sitting in a chair required tremendous amounts of focus. The Doctor’s face reflected his odyssey too, as well as a bit of worry concerning my health. “I’m dead, man. I’m a fucking corpse.” I kept answering him. But worst of them all was the Cougar. Pale as Count Orlok, like he spent all the Technicolor he had in him. With his face between his hands and thighs, he managed to utter “I’m going to look for some real shade, this is bullshit”. He kicked the sad-looking gazebo which almost fell to the ground. He was right, staying in the camp was not the most brilliant plan, since dehydration was a very real menace. One thing I’m sure: I have never sweated so much in my entire life.

After satisfying my basic needs as a living being, I had to run uphill to be on time for the first gig, a band that I really love: Allah-las.

This was the second time I have seen them and they were twice as amazing. The stage was a perfect fit for this kind of music, the on-screen visuals almost a firework show. Also, the grass was green and the sky blue. What else do you need to be happy for more than an hour?

Charles Bradley was the big surprise of the fest. Amazing music, amazing band, and amazing man. That true soul feel, a very real experience from a man who had nothing and that night conquered everything while tears of joy ran down his puffy cheeks while hugging the public near the stage.

After this, I can’t recall much more than The War On Drugs being boring and bland as hell, also most of us were too tired to even pay attention.

I didn’t particularly enjoy the after hours DJ Richard Fearless, found it too monotonous to my tastes.

Also, I ran out of fuel, so I got back to the tent along with the Doctor, who was fighting to keep his eyes opened. The rest of our group keep partying, gathering strength from god knows where. We lost all contact with the Cougar that night.

The bright rays made way to some heavy rain straight out of the jungle in that movie about the retarded soldier, definitely looked like some ‘Nam shit. Trapped in our tents, we had to wait inside, taking refuge until the monsoon passed. The damages were minor this time, the gazebo still stood tall, but now looked like a broken coffee filter.

The camp was thrown into utter chaos, our basic equipment soaked. Not that any of us cared anymore.

A sensible course of action, after measuring our hangover level, was visiting the town for a much needed shower (first one for me) and some hot meal in a plate. In a plate. That’s big talk in Coura, a Lazarus-kinda trick some might say. The other half of the party, led by the Cougar, made an express trip to Galicia to get some last-minute supplies, like soap and limes. These are the craziest motherfuckers to ever set foot in a fest, period.

This was the last day, time for the all-in. Everything or nothing. The weak shall be left behind, only the true champions survive. The Cougar caught some sleep for the first time in three days. The Doctor was ready for the floor. I felt like a saint. Or more like a martyr. The lamb was open in half, each one of us took a bite. Proceeded to crack the sky open. And the sun shone again in Coura.

After climbing our way to the entrance for the last time, the security was not as relaxed as usual, with a queue and guards patting you for hidden alcohol.

After that, we finally arrived in Woods. Amazing band that recalled funk tunes mixed with some Led Zep stuff, if I remember correctly. What I remember the most is how much I enjoyed that whiskey-Somersby.

They were followed up by Temples, great band that made us trip (in a artistical sense) while smoking sitting in the hill, a quite chilling experience while the sun was hiding behind the massive trees that surround the main stage. You must be wondering why the relaxed attitude. Well, we were saving energy for the real monster of the day: Fuzz.

I have never been so badly battered in a gig. The pogo dance raged from the first chord until capo. When it all began, the Doctor was next to me, kicking and jumping so he won’t get smashed against the hordes of people that danced violently around us. His small frame was both a blessing and a curse in this scenario. Me? I got pushed back five or six files while bouncing around uncontrollably, my sunglasses fell to the ground and I had to save them by tackling people with my elbows and catching them quickly, just in time; ninja style.

They even played ‘Fuzz’s Fourth Dream’ second. “My God, we’re going to die here tonight.” I thought. In the middle of the gig, after meeting my group again inbetween songs, I gracefully stepped aside the main pit (basically the whole front of the crowd up to the mixing deck) to avoid further injury to my persona.

Bottom line: one of the most amazing experiences I ever had in a live show. Thank you, Ty.

After this brutal experience (in every sense of the word), everyone needed some rest. Next in line, after one of the best gigs of the week, was Lykke Li.

I’ll say one thing: it was the worst concert of the entire fest. Besides, after Fuzz… well, nothing could surpass that. Ever. So we recharged batteries sitting in the meeting point (a nice small hill behind the phone charging station, if want to meet us next year), went to the bathroom, had some dinner… that kinda stuff you do when the show doesn’t fit your taste.

Ratatat was the perfect closing for the experience we just had in the last four days.

The visuals, the music… giant 3D eagles popped out of the screens as the nodding turned into dancing. I had a lot of expectations from them, they fulfilled pretty much every one of them. Beauty for your eyes and ears.

After this massive electronic experience, The Soft Moon was the cherry on top of the cake.

Highly danceable beats that broke into mass-hysteria. I don’t remember the next DJ, as for me it was a single block until everything ended.

I sweated, we conquered the bathrooms several times and someone lost and found her or his phone. A lot of other things must have happened, but I sincerely can’t recall any of them. The consistency of my amygdala at that point was nearing zero, the brain melted by the intense partying and the heat of the past days.

I apologize sincerely for any damages, moral or otherwise I could have caused. I remember meeting a really peculiar Portuguese radio journalist that we have previously encountered in Sonic Blast fest in Moledo. Friend, if you are reading this: we salute you.

After the usual closing session brought by DJ Nuno Lopes, we had perhaps the most sensible idea of the entire fest: go eat something, get kicked out by the seguranças and head back to our tents to get ready for the harsh trip back home. I turned my head and took a long last view of the mighty Paredes while the sun was rising in front of us. Now the venue was almost empty, only a few people cleaning up and kicking out the last remains of public, like us.

I entered here being one person and I leave being a completely different one. But it happens every year, in August, near the peaceful waters of the river Coura. I guess this is it, this the stories we will tell our grandchildren, how we destroyed ourselves during a week in some god-forsaken hill in the north of Portugal. But, if you look behind the stage, on the trees, you can see a watermark, where the highest form of the wave collapsed and washed our barriers away, letting us be ourselves and enjoy real freedom while listening to incredible music. Like a completely different world, mindset, sensation… the sensation of being alive, in some point of time and space that floats randomly around, where decisions are taken in a split-second and lead to very different outcomes. Where choices matter. An empowering feeling of control through small doses of chaos that pile up into a punishing hangover. Death. Resurrection. Ascension. The classic triad of the journey to hell and back is still the main them in this twenty-first century epic.

A back to the roots of the human adventure, it makes you feel connected to the people, to nature and, most important, to your own self. With your feet on the ground, no shirt on, dirt all over your body, the tribal shall prevail over the individual egoism. You can’t imagine how liberating that is. You have to live it to understand it.

Just do it. Go there. You won’t regret it. And it may be the best experience of your entire life. 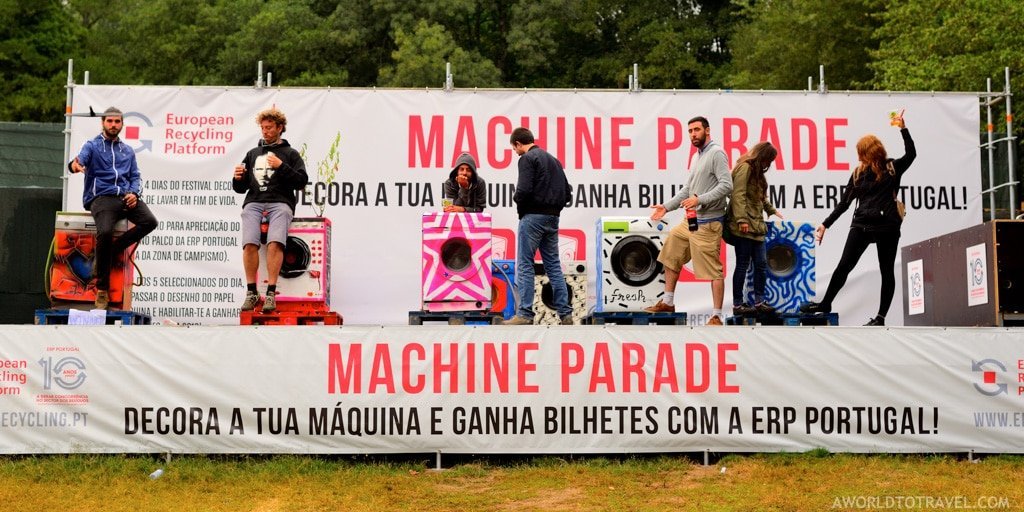 With my battered and scarred mind and body, from sun, dust and claw, I woke up in my tent, half-past twelve, the clock said. What happened in the past 96 hours seemed surreal and distant. It was a dark and stormy morning, our camp finally tore to shreds by the windy rain. We picked up as much as we could and jumped in the car, never to feel the same magic again until three hundred and sixty days later. The road was awaiting us. A chill crept up my spine as the wet shirt dried up on me.”This is bullshit” I thought.

Goodbye, Coura. See you next year.

Words: Lois Agrelo Arxóns is a Galician writer from Noia who also happens to love music. He writes poetry, narrative, scripts, and articles; you can catch a glimpse of his work in The Ganja Papers.

Photos / Video: Taken by Jose Martinez and Inma Gregorio who have been enjoying this music festival since 2011 and are already looking forward to 2016’s edition.