Author Kari Loya has recently published an inspiring book about an epic cross-country bike journey he took in 2015 with his 75-year-old father, who had early-stage Alzheimer’s.

Our first three days bode well. We average 75 miles daily on the wet, relatively flat (except for Monticello), historic ride into Charlottesville. After sleeping the first night on the floor of a church—our Adventure Cycling Association maps indicate places willing to host cyclists—and camping the second behind a fire station where we have a Domino’s pizza delivered to our tent, we splurge for a hotel where we sleep well, eat well, and hit up a bike shop for minor gear adjustments.

Cycling out of Charlottesville the next morning is gorgeous. The sun finally greets winter-weary UVA undergrads on beach volleyball courts, fragrant apple blossoms eager to celebrate spring, and storybook vineyards. We’ve planned for a lighter day of just 40 miles to see how we manage our first thousand-foot climb—up Rockfish Gap on the Blue Ridge Parkway, then down to Waynesboro on the other side. Because of our leisurely morning departure, we don’t reach the campground until dusk, but we make it. Slow and steady, Merv powers his way up and over the pass—after I take his backpack to lighten the load—then enjoys the long descent.

As soon as we arrive at the campground/RV Park, Dad goes to the bathroom while I set up camp. I sneak into the on-site store just before it closes to pick up odds and ends, then whip up a simple dinner. Forty minutes later when Merv returns, his dinner is waiting on a table, but I have already finished my own. Forty minutes? Mental note: check on him in the bathroom going forward.

The next morning, Dad comes out of the bathroom wearing his Lycra shorts inside out—the bright red crotch padding screams like a strange, talking bullseye. An ill omen for the day? I silence the negative thought, make dad aware of his fashion blunder, get him squared away, then we’re off.

After a full country breakfast at Weesie’s Café in Waynesboro, we climb slowly 700 feet back up to the Parkway, then turn south for what should be our longest day so far—nearly 100 miles—seemingly doable given our mileage so far. But I’ve made a critical, albeit well-intentioned, error in preparing for our cross-country trip: To save money, I am using maps I purchased in 2000 when we originally explored the trip idea. I assumed any variance with routes, road names, and ancillary resources (cafes, service stations, etc.) wouldn’t be a big deal—we’d figure it all out. What I hadn’t realized, though, was that the older maps don’t include elevation profiles. Without those, five miles could be a breeze… or torture. And spotty wireless coverage along the route isn’t helping. We unfortunately never know exactly what lies ahead.

Reality hits hard. By early afternoon, we are struggling atop the Blue Ridge Parkway, which I mistakenly assumed would be relatively flat after the initial climb—and dad begins walking his bike. Okay, I think, we adjust.

“Dad,” I say, “Why don’t I take your backpack?” He agrees, hands me his heavy, but prized, possession, then mounts his bike again to begin pedaling. Twenty minutes later on another upward stretch, he dismounts. Okay, we adjust.

“Dad,” I repeat, “Let me take one of your panniers.” Once again, he agrees, and I strap his left rear pannier onto my back rack underneath the tent. We resume pedaling, but only get 20 minutes down the road. Okay, we adjust. This new mantra is now cemented in my brain.

Except there aren’t any more weight adjustments to make. This already borders on a comedy sketch, like I’m hauling my life possessions and might be living under a bridge. The additional weight is testing my balance and nearly killing me.

The unusual heat—80 degrees, welcome in other circumstances—doesn’t help. So we do what we can: we stop frequently, drink and snack plentifully, even nap on the side of the road. We just need to get to the next town to regroup.

We start descending from the Parkway, riding steeply down Route 56, winding toward Vesuvius, far from our original destination, but now a place to recover. Because of the weight of my load, the smell of burning rubber rises from my brakes as we white knuckle our way toward the bottom. But halfway down, Dad is no longer behind me. I pull over to one of the few spots with a shoulder, then wait five minutes. Nothing. I yell. Still nothing. So, I have no choice but to start pedaling back up.

Fortunately, I find Dad after a few hundred yards. He has a flat tire, our first of the trip. I hunker down, then spend an hour—an hour—on what becomes the toughest tire change of my life. His new tire is so stiff I can’t get it back onto the rim—and I break a plastic tire lever trying. When I finally get it on, I inadvertently puncture the tube, so it goes flat again. AHHHHH! After screaming my complete R-rated vocabulary as loudly as I can, I realize we are close enough to the bottom that we can walk the final mile into Vesuvius, a one-store town with a three-table store-restaurant. We enter Gertie’s Country Store, where a heavy-set local on a stool greets us. 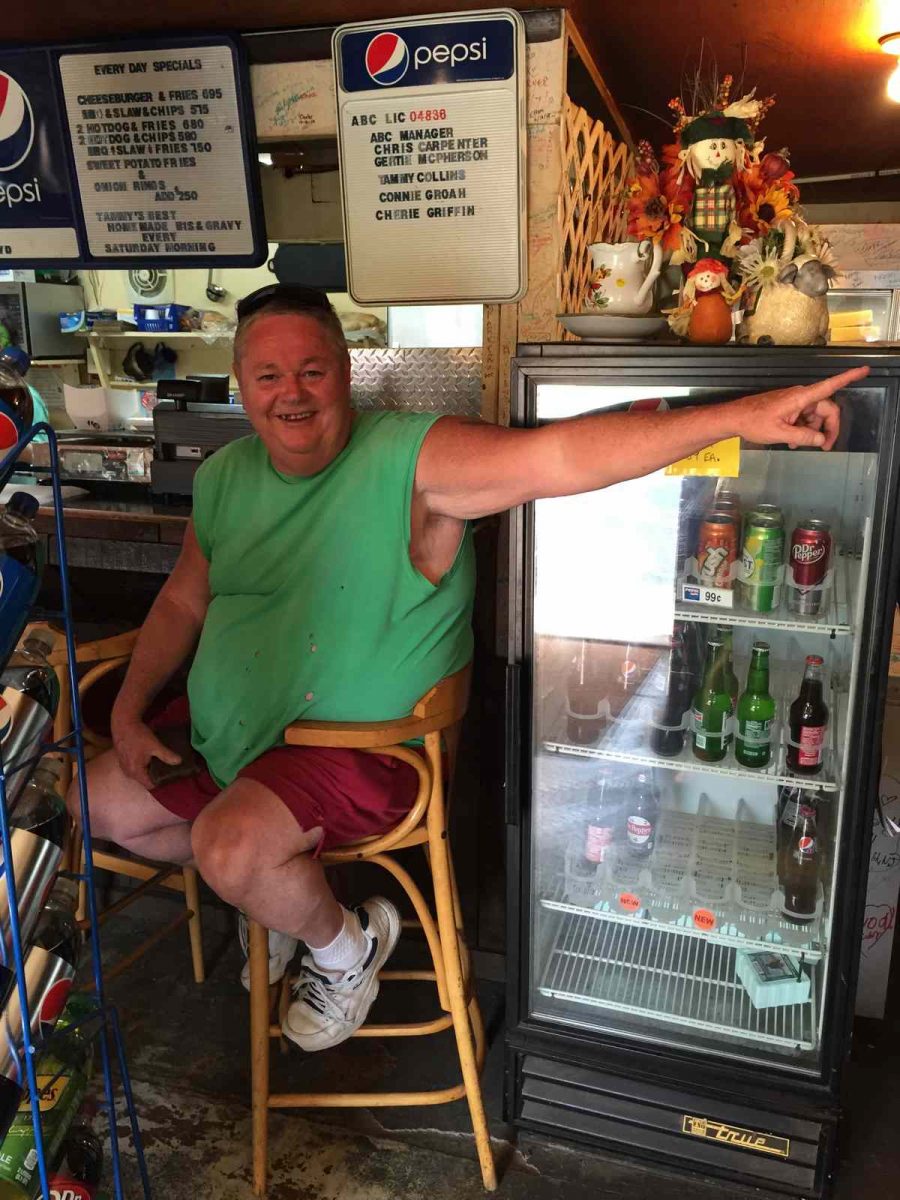 “You felluhs just come down Route 56?” he asks, pointing his arm east. “Back about ten years ago, they did the Tour DuPont and Lance Armstrong came through. He wore number four. They rode about sixty miles, then shot up 56 over there. You know how fast he got to the top, son? Six minutes and forty-seven seconds!”

He couldn’t be more excited or proud. While I appreciate the friendly banter and fun fact, we are starving, so we make our way to a back windowless room with a lone card table dressed in a cheap, plaid, plastic tablecloth. We piece together a pseudo-meal of a hamburger patty and shredded iceberg lettuce (limited by our gluten-free diet—more on this later), then sit down, grateful not to be cycling.

Five minutes later, a woman rushes into the restaurant.

“Can someone call 911?!” she shouts. Someone is having a heart attack outside. My AT&T phone doesn’t have reception, so I ask Dad, with Verizon, if he does.

While he reaches for his phone on the table, I glance at his bars and see none. Without a word, I bolt out the door to help.

Just around the corner is a 60-year-old obese man lying on his back on the ground. The local who’d shared the Armstrong story is kneeling next to him, performing chest compressions.

I crouch opposite our new friend, who is out of breath, sweating bullets, and dangerously close to cardiac arrest himself.

“Let’s rotate,” I suggest. I haven’t practiced CPR in years—and I’ve never performed it on a real person—but we have no options. He does 30 compressions, the victim’s partner administers two breaths, then I take over. I am so amped on adrenaline that I continue my sets for five minutes while our friend catches his breath. The victim’s face has turned blue, and his belly is swelling.

“We had sex up at the campground,” the lady explains between sobs to a paramedic. “Then he started complainin’ of chest pain…” She continues crying. “Don’t you leave me, Randy!”

I step aside and the paramedics now take over in front of a crowd that has grown to 20 people, likely half the town. I walked back into Gertie’s, where Merv is still fiddling with his phone.

“Well… hmmm… I thought I had… reception…” he confesses, puzzled. “But I guess I don’t…” He sets the phone down and looks up. “So… someone had a… heart attack? Boy, oh boy…”

An hour later when we leave, we learn the man didn’t make it. The mood is somber. We walk our bikes a half-mile across town just before dusk to pitch our tent in the backyard of a church where we’ve obtained permission to stay. I just want to sleep—and I dread that I still have to tackle the stubborn tire in the morning. 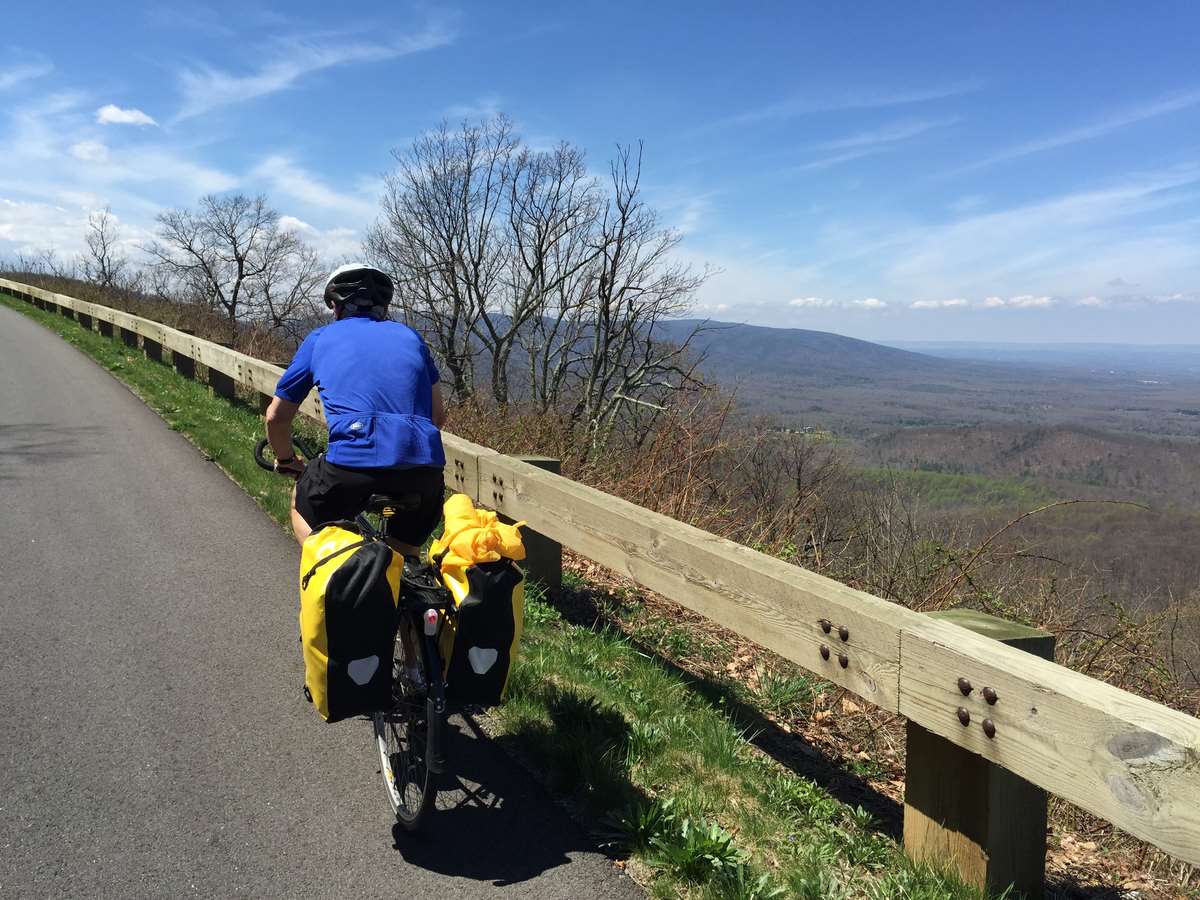 But sleep soothes the soul. And so does a proper meal. After granola, fruit, and a Rock Star iced coffee that we’d lugged from Charlottesville, I set to work on the tire while Dad relaxes.

Merv’s tire feels as much carbon fiber as rubber. I use my entire body to stretch it while leveraging my one remaining tire iron. Patience, I remind myself, then take a break. Using Merv’s one bar of cell reception from a corner of the church lot, I Google “bike shops” and something comes up twenty miles away. I call and a man picks up, clearly surprised at the early-hour inquiry.

“Sorry,” he says. “We’re closed… and we’ll be closed tomorrow, too.”  But then he throws me a lifeline: “Try soaking it in soapy water.”

I suds-up the tire, let it soak, then try again. Finally, after 30 minutes of wrestling, bingo! Thank God. Problem Number One solved.

Now I have Problem Number Two: I need to go number two. Fortunately, a blue Port-o-Potty stands on the edge of the church lot. Just as I am wondering where Merv is, the Port-o-Potty door swings open, and Dad strolls out.

“You going to use… the bathroom?” he asks politely as I make a beeline for relief.

WTF? What does he mean the outhouse toilet splashes? Geez, am I going to need to help him with this now, too?

I enter the plastic chamber, immaculate by Port-o-Potty standards, then sit down. But Dad’s words echo in my head. Why would I need to be careful? Curious, I lift my cheeks off the seat, twist awkwardly 135 degrees, then peer into the abyss the way kids might if looking for the boogeyman with a flashlight. It is unusually deep, maybe eight feet, and brilliant cobalt blue. Like Crater Lake, sans Wizard Island. Ironically, beautiful is the word that pops into my head.

My mind travels back to high school physics: if you drop a dead object from a given height, the object will not rise above the original height. I’ll spare the details, but I spend the next 20 minutes using flimsy paper towels—thank God there are some—to clean up a national park-size mess. It’s just Day 6 and I’ve already reached rock bottom… with my bottom.

But sitting on my humble throne, I then reflect on the last 24 hours, smile, and start laughing. If we can make it through this, we might… we might… we just might have a chance to make it across country. 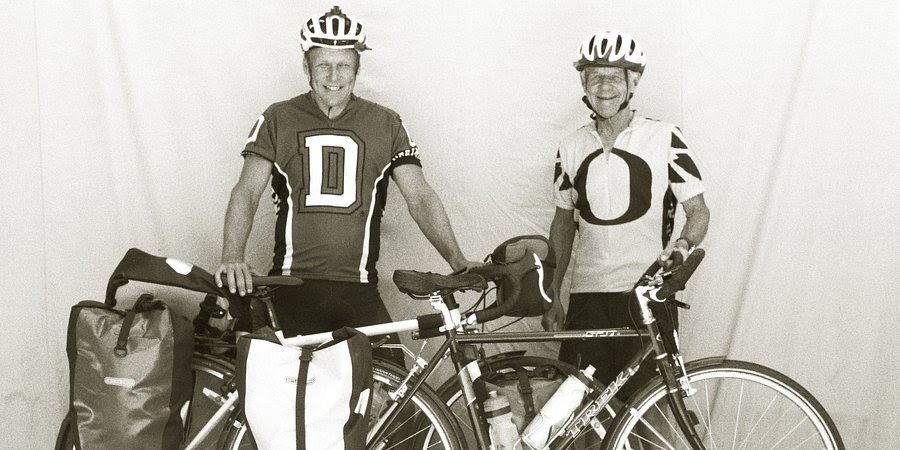 Conversations Across America is about a father-son journey of a lifetime: a 73-day, 4,600-mile cross-country bike trip Kari took in 2015 with his 75-year-old dad, Merv, who had early-stage Alzheimer’s. Their adventure reminds us of the power of perseverance and adaptability in the face of uncertainty. It’s also a heartwarming example of listening and discovery, including 300 short conversations with people who approached them along the way, providing a rich snapshot of America, especially rural America.

Conversations is a mix of Blue Highways, Tuesdays with Morrie, and Humans of New York… on a bike. As you read, you can’t help but reflect on your relationship with your own father and children, while gaining perspective on Alzheimer’s—which now afflicts more than six million Americans—and getting a sense of the TransAmerica Bike Trail and America itself. Above all, you will be inspired to seize-the-day with someone you love—whatever that means to you.

The new book, available on Amazon as an e-book and in paperback, is Conversations Across America: A Father and Son, Alzheimer’s, and 300 Conversations Along the TransAmerica Bike Trail that Capture the Soul of America.