The City of London is in the centre of this historic city and is spread over one square mile. Within this space there are many cultural venues, shops, museums and galleries, restaurants and bars, green spaces, churches and shops. It served as a busy trading post for the Romans during the time they ruled here almost 2000 years ago. And a number of irregular streets to be found here follow the ancient roads built by the Romans. Its boundaries are also loosely aligned along the route of the Roman wall that existed in the 2nd century AD in the area.

Note: It is a popular place with tourists who are attracted to the various London hotels deals that are available in the numerous hotels found in the area. For those who want to stay in luxury without having to pay a ransom the Park Grand Paddington Court Hotel London is the place to stay.

And there are plenty of attractions to explore in the area. There also are many historical landmarks built when the area was densely populated. The most prominent attraction is stately St. Paul’s Cathedral, apart from Leaden Hall Market and the Guildhall among other historic buildings. And the iconic Museum of London, that lies in the oldest part of London, and documents the times and history of the city.

History of the City of London

After the invasion by Claudius the Roman Emperor in AD 43, the Romans realised that Londinium (Roman London) was ideally located at a strategic point near the Thames River, where it could be crossed. Also trade ships from the European continent were able to travel to Londinium, as a result of which it prospered and became the largest town in Britain. Although most of the remains of Roman London have been destroyed there are relics in the form of public baths, an arena, an amphitheatre etc. The most distinctive relic is the city wall that still partly delineates the City of London’s boundaries. The original Roman Wall was constructed in the early 3rd century. It was later fortified during the rule of Alfred the Great, the Anglo-Saxon ruler in the ninth century.

By the time of the arrival of the 16th century the population of London saw a rapid growth that led to it becoming the most densely populated city in Western Europe. During that period most residents were still staying within the boundary of old city wall. Even though the Great Fire of 1666 destroyed a large part of the wooden homes and severely damaged property, there was a steady rise in the city’s inhabitants. This trend only saw a reversal with the advent of the eighteenth century when there was a rapid decline in the population of City. This was as most residents had shifted to the suburbs and many of the properties were sold or rented to commercial businesses.

With the centre becoming home to London’s financial district in the 1970s it led to the construction of numerous modern skyscrapers. While there have been attempts to attract more residents to the area over the years it has not been very successful an attempt. Very few stay here and it is quite deserted on the weekends. It is only on weekdays that the place is a hive of activity and has people bustling about the place.

Landmarks in the city of London 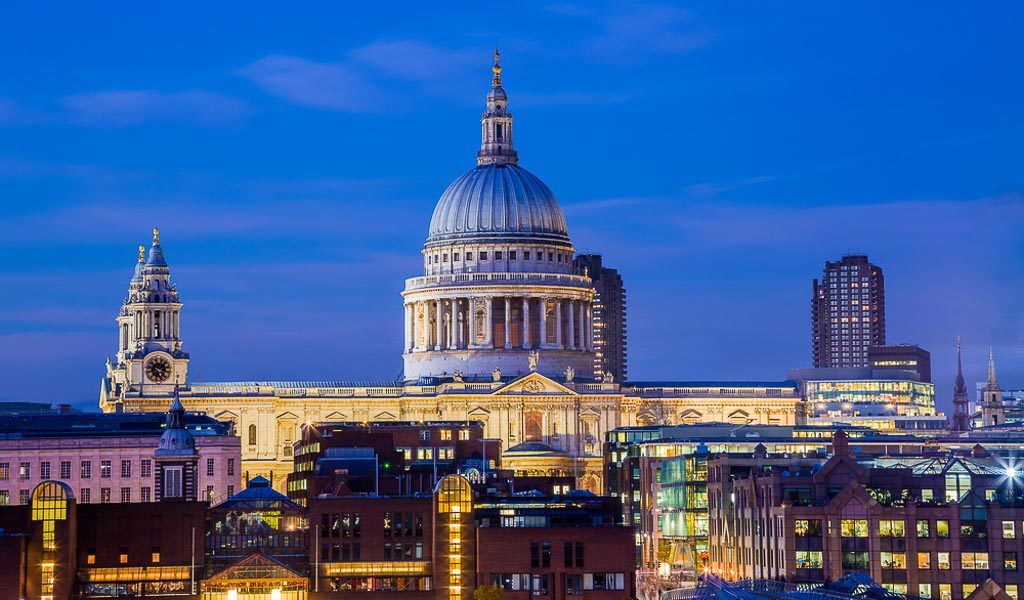 There is an abundance of historic landmarks that are testimony to the area’ historic past. The most recognised is the masterpiece of Sir Christopher Wren, St. Paul’s Cathedral. It was built in the 17th century, after the Great Fire had destroyed the existing Cathedral in the same area. Sir Christopher went on to build many more churches – 51 one in all in London.  These include St. Margaret Pattens Church, St. Mary Aldermary and St. Mary-le-Bow church among other surviving churches in the city.

Despite the damage to property caused by the Great Fire, a few buildings survived. Among them is the Guildhall, a stunning 15th century building. It later was reconstructed in a neo-Gothic style in the 17th century. Among the few surviving structures of the Victorian era in contemporary times is the famous Leaden Hall Market, which is a glass-covered shopping arcade. Also a short distance away is the Royal Exchange that is a magnificent 19th century edifice. It once was a commercial hub and now is a trendy chopping spot. To the north of the Royal Exchange is the impressive Bank of England building. It also houses a museum dedicated to the history of the Royal Bank. Bang opposite is the Mansion House official home of the Mayor of the City of London. It has a stunning Palladian styled façade in keeping with the appearance of the exchange and bank buildings.

Of some of the earliest existing relics of the City of London, the London Wall first built in the 2nd century was later expanded about 200 AD. It spread for more about 3 miles and was up to four metres in height and in a semi-circular shape. It started from present day Blackfriars station and extended to the Tower of London. It was in pretty good shape till the 17th century, when it began to be gradually demolished as the population grew. Sections can still be seen along its routes notably at Tower Hill and at the Museum of London.  Another famous remnant is the ruins of the Temple of Mithras, discovered n 1954. To know more about the history of the Romans in Britain and about Londinium, there is an exhibition in the Museum of London, along with many artefacts and sculptures of the period.