Ask an Italian about the best products in Italy and inevitably Emilia Romagna food will come up. It’s where classics like lasagna and Bolognese sauce (the meat sauce Americans might call spaghetti sauce) were born. It’s where Parmigiano-Reggiano cheese comes from. And there are plenty of lesser-known gems a visit there will reveal.

So, what should you eat when you visit the region? What kinds of specialties await? Here are 12 delicacies worth seeking out:

Wait, Where Exactly is Emilia Romagna? 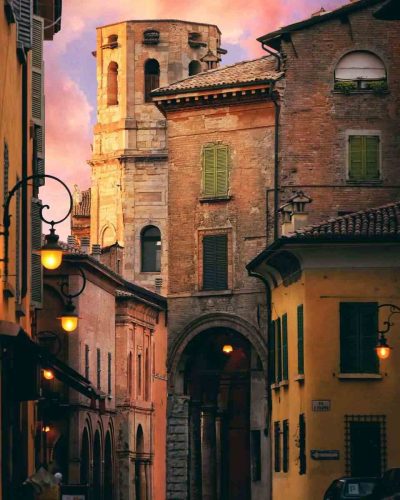 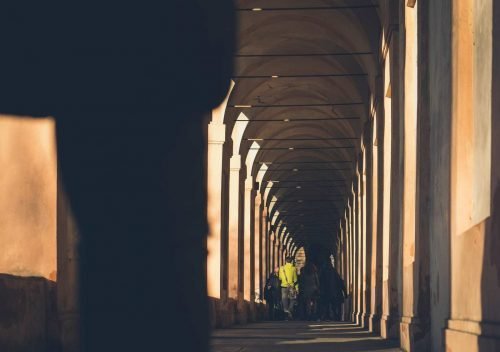 Before we talk about food (and oh will we talk about food!), let’s orient ourselves. Emilia Romagna is a region in northern Italy that stretches from a little bit southeast of Milan to the coast of the Adriatic Sea.

The capital here is Bologna, but don’t be fooled: the best eats in Italy are usually outside the main cities in smaller towns and tiny villages. Other major towns include Ravenna, which is known for its colorful mosaics, Rimini along the coast, Parma (home of the famous cheese), and Modena, which is a smaller, more charming version of Bologna. 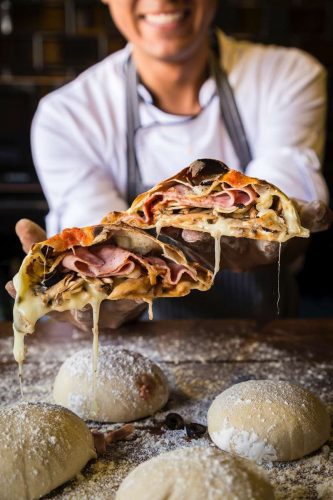 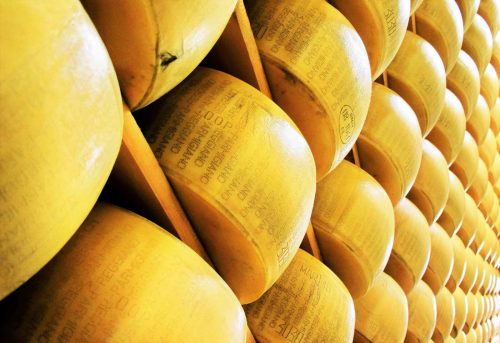 In addition to its gastronomy, the region is known for its cars (Ferrari and Ducati are here, among others), Medieval city centers, and beach resorts.

And now that we’re oriented, onto the Emilia Romagna food! 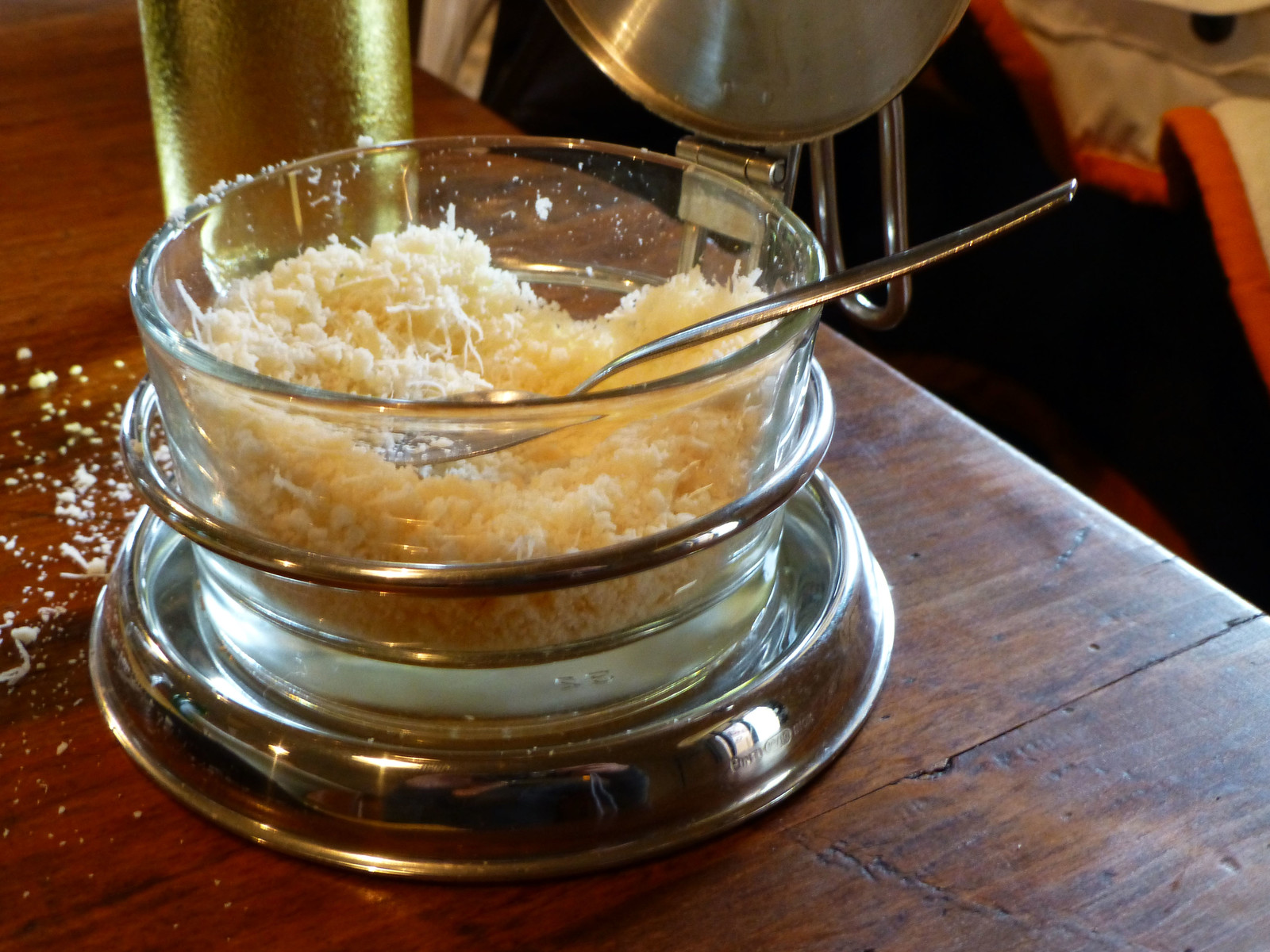 Born in Parma, this hard, distinctively-flavored cow’s milk cheese can trace its heritage back to a bunch of monks in the Middle Ages. It quickly caught on with the nobles and never went out of style.

Fast-forward to today and you’ll find it freshly grated in pretty much every northern restaurant worth its salt. In Bologna, bowls of it were served alongside our meal with a giant spoon for generous portioning.

As with anything in Italy, when you’re buying a chunk of your own, it pays to ask if it’s DOP (Denominazione di Origine Protetta). This is a designation that means it’s the real deal – from the region, made in the traditional way, completely authentic.

Thinly sliced, dry-cured, aged for 10 – 12 months, and delightfully salty, this prosciutto is one of the most prized in Italy. You can add it to pasta, pizza, or risotto, but normally the meat is eaten raw (and if you’re like me, with a good glass of red wine).

The best version I’ve ever had was served for breakfast alongside a rich array of other local specialties at Villino di Porporano—a countryside bed and breakfast just outside the Parma city limits.

Ah, the lunchmeat with a violent history! This thin, lean slice of pork speckled with lard was so popular, famous, and important to the region that at one time counterfeiters selling fake versions were stretched on the rack three times.

The reason? The real stuff is damn hard to make and slice so finely. First, it is ground into a paste. Then it’s mixed with its traditional spices and herbs, slow-cooked, and cooled. After that, you slice it so thin you can almost see through it and serve it up on a meat board or in piadina. 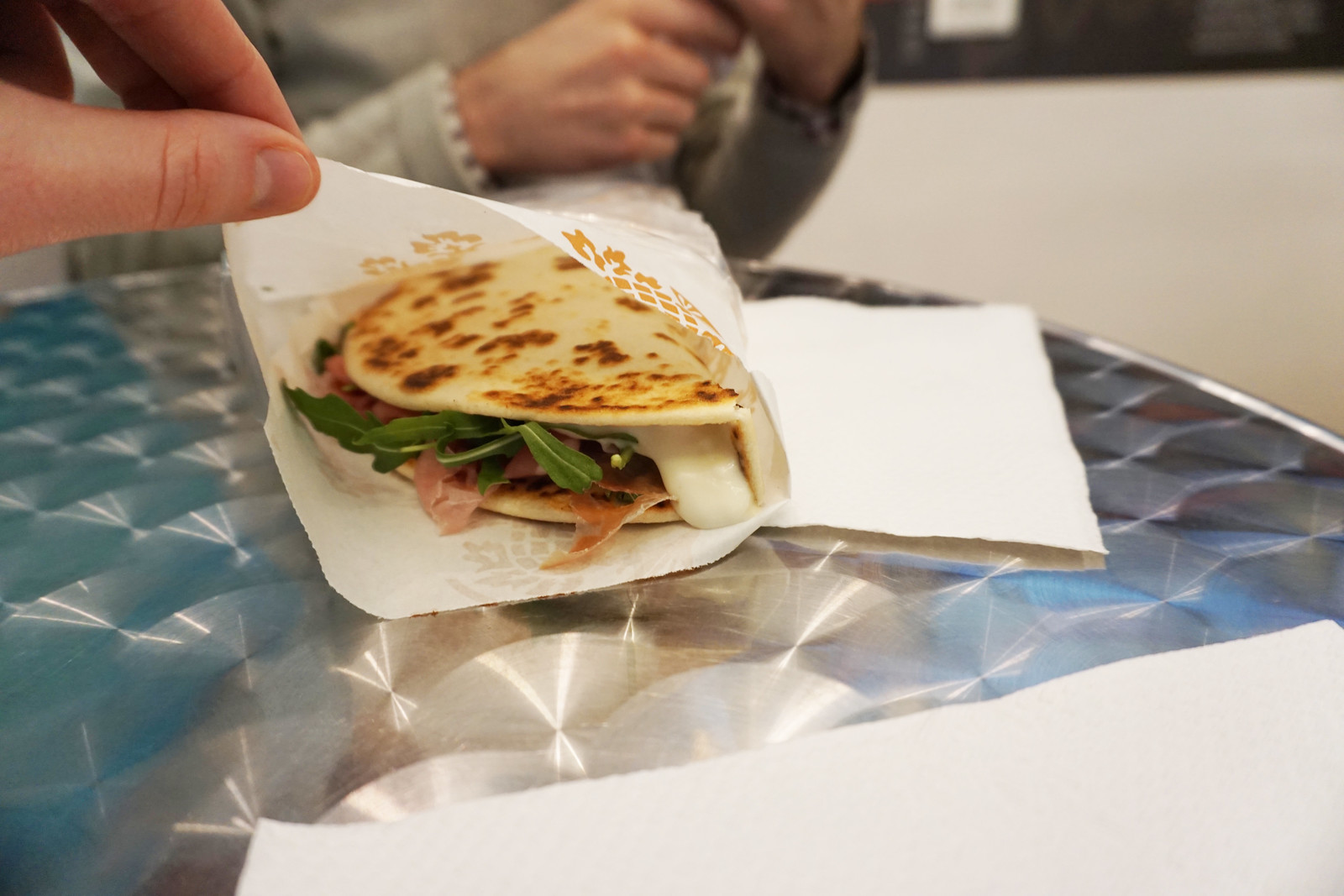 This thin flat-bread stuffed with local meats, cheeses, or veggies is the preferred snack of Bologna and its surroundings. Not to be mistaken with panini (Italian sandwiches), these are more akin to thick, homemade wraps. 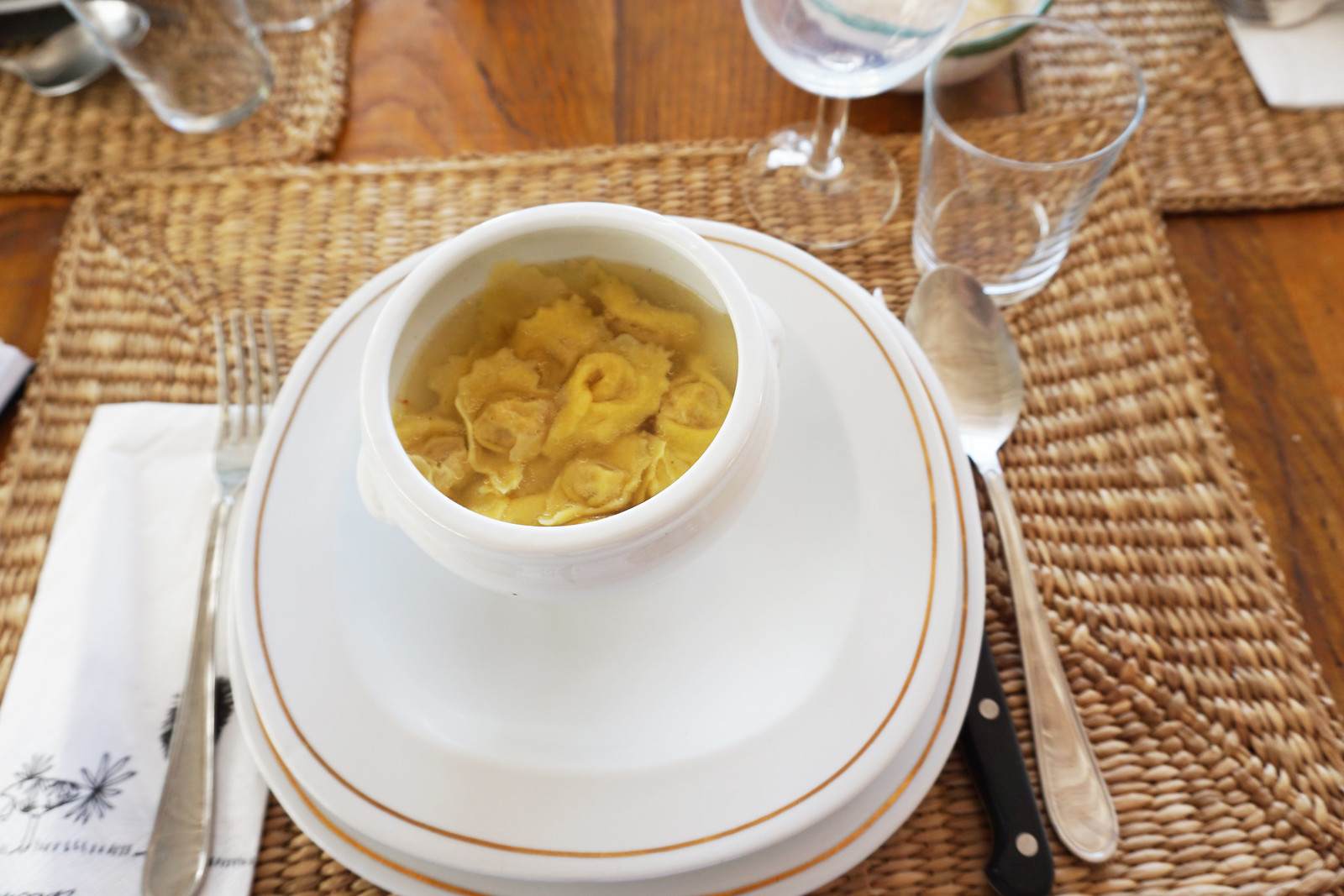 Roll out your pasta dough as thinly as you can, stuff it with a filling of Parmigiano-Reggiano, nutmeg, pork, and egg, make the tortellini as small as you can, and cook it in a rich, salty chicken stock (traditionally made from capon) and you’ve got one of Emilia Romagna’s signature dishes.

Originally, the warm dish was a Christmas tradition, but these days, you’ll find this pot of broth bobbing with homemade pasta in pretty much any family-owned restaurant in the region year-round. 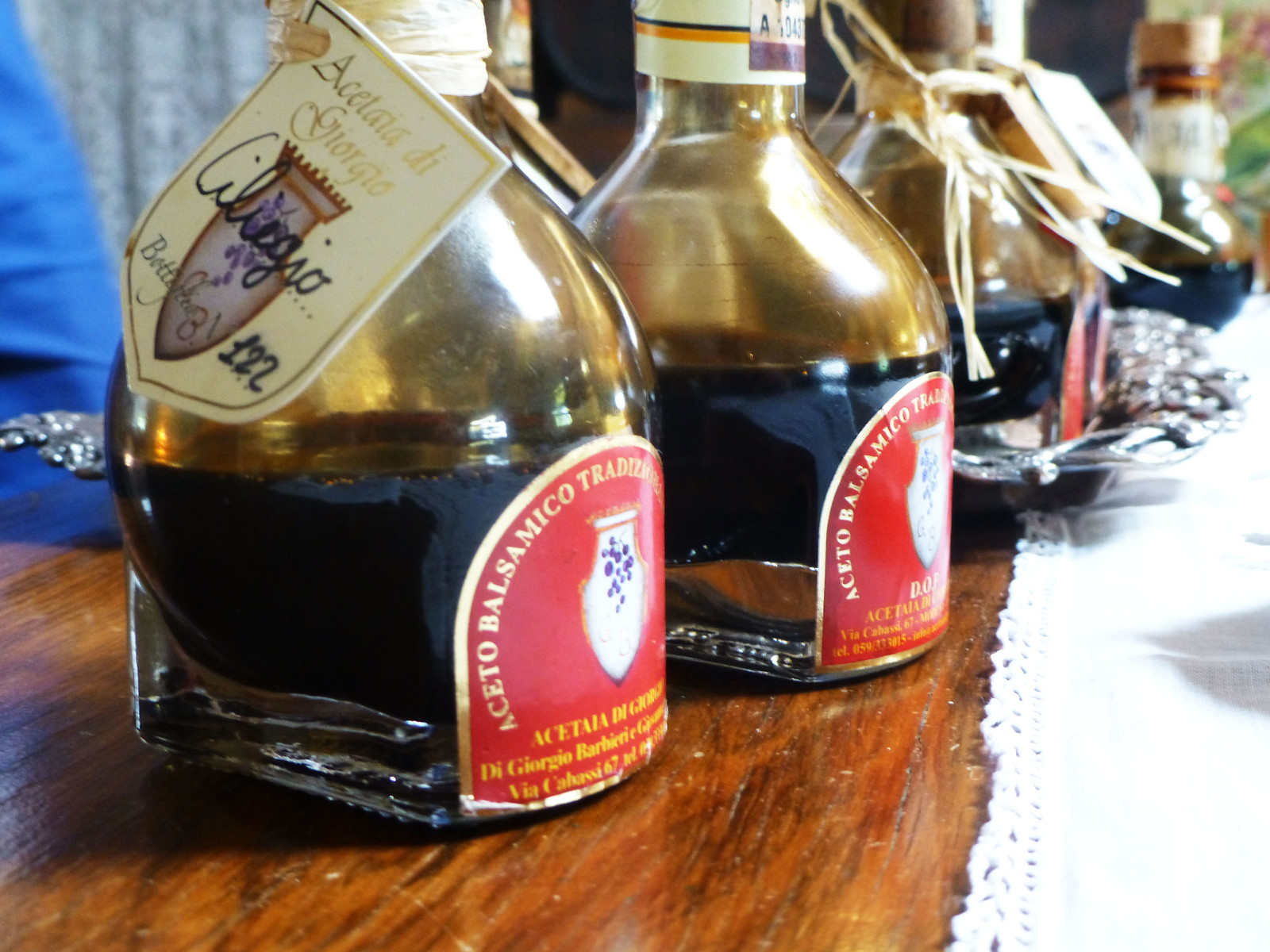 Forget everything you know about balsamic vinegar. The grocery store fare you’re used to—full of preservatives and aged for three months or less—couldn’t be farther from the real deal if it tried.

Real balsamic vinegar is aged in wooden barrels for at least 12 years (with the best, most mellow flavors found in those aged 25+ years). The type of wood used in the barrels is part of what lends vinegar their flavor, with cherry wood lending a sweetness, Juniper infusing a spiciness, and mixed wooden barrels leaving a tart taste on the tongue.

Real balsamic is pricey (after all, it takes years to produce and during that time it reduces by more than half), but worth a splurge. Try it on meats, salads, or even ice cream (for which I recommend a balsamic aged in cherry wood).

For a tasting, you can’t do better than Acetaia di Giorgio—a traditional producer in a beautiful Modenese villa surrounded by gardens full of climbing ivy and shaded tables. And if you buy some outside the production facility, always ask if it’s DOP. You don’t want to settle for less than the real thing. 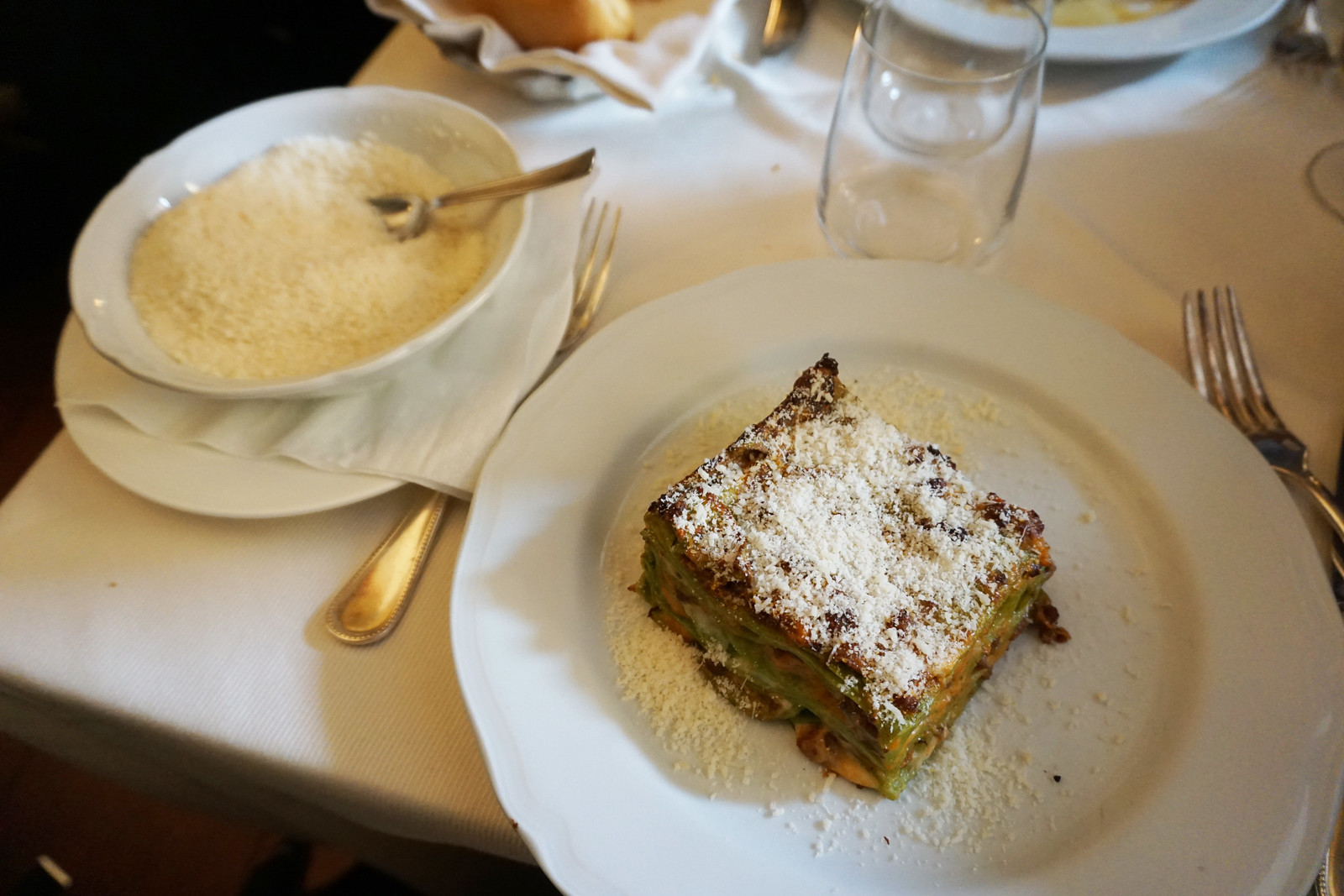 This one’s familiar to most of us whether we’ve tasted the real thing in Emilia Romagna or not. Classic lasagna is made with Bolognese—the famed local meat sauce—layered between sheets of pasta. Restaurants in Bologna serve it with a pile of Parmigiano-Reggiano to spread over the top and the sauce is surprisingly mild compared to most American versions. 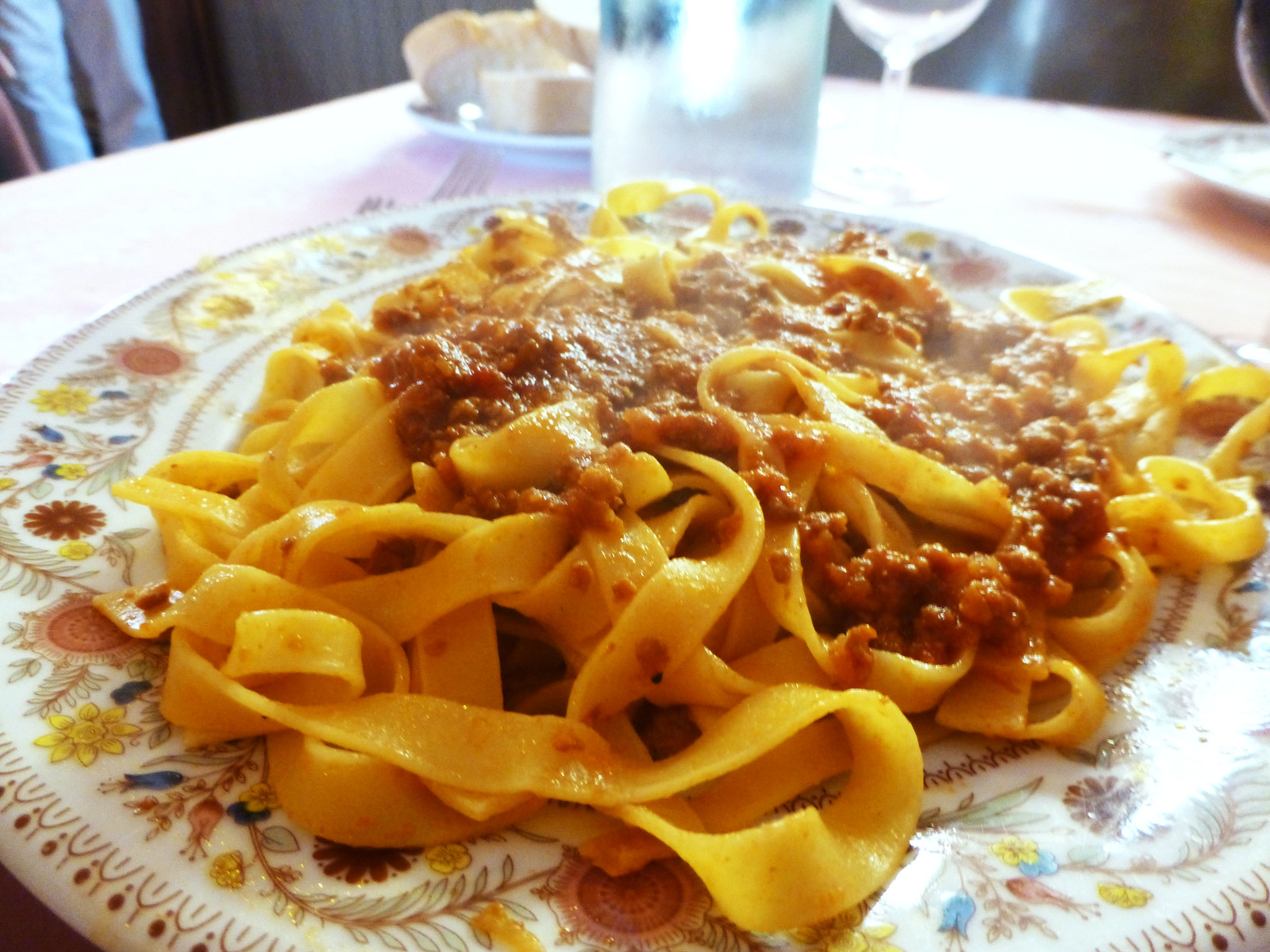 Speaking of lasagna, here’s the traditional sauce it’s served with: Bolognese. Traditionally, this tomato-based sauce is slow-cooked and stuffed with a mix of beef and pork meat, pancetta, and a little milk. In addition to lasagna, you’ll find this sauce commonly slathered over thick, flat tagliatelle noodles. 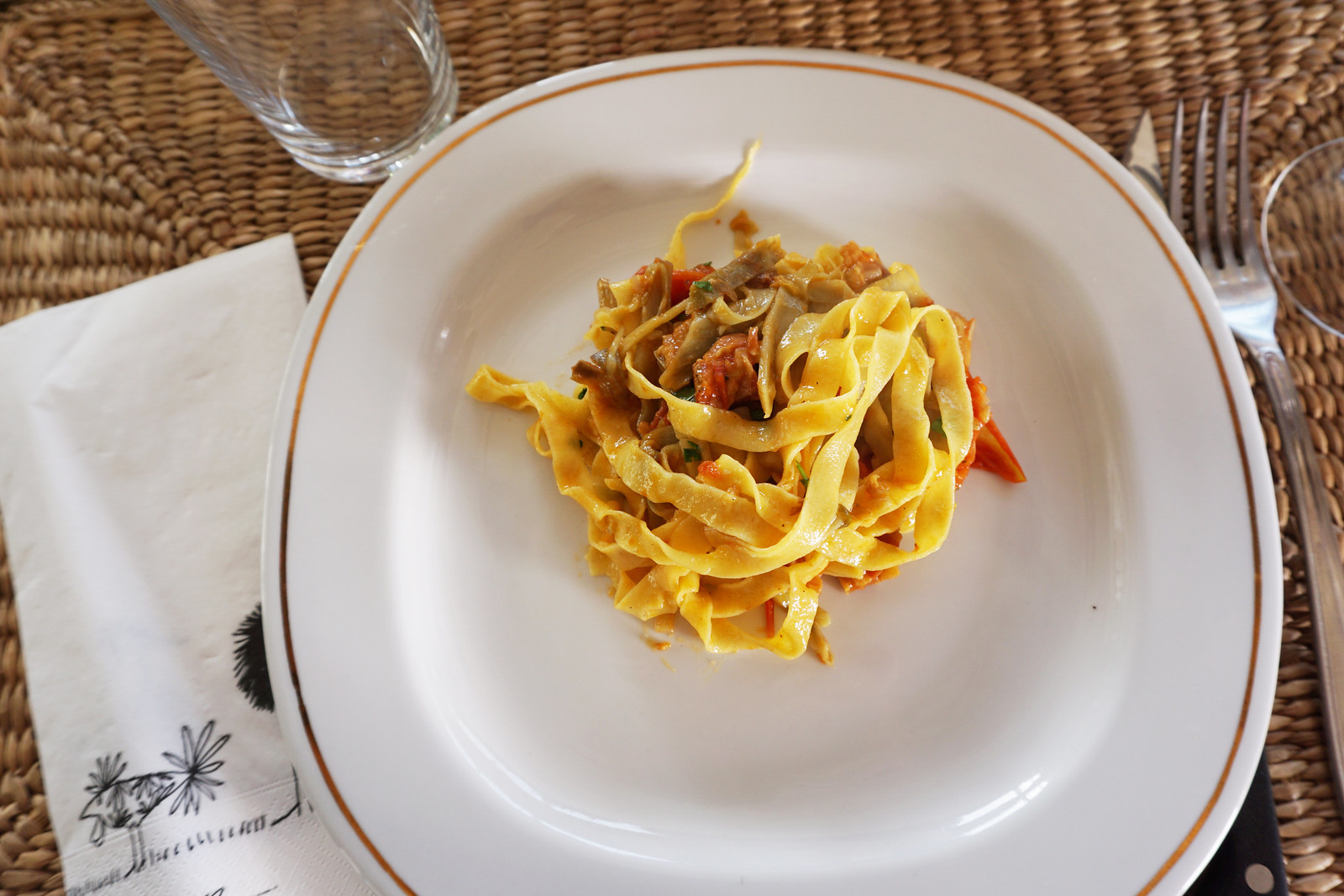 But what about spaghetti Bolognese? You might be asking. The answer is that it’s not a thing. Nobody’s going to stop you from putting Bolognese on spaghetti, but here in Emilia Romagna, tagliatelle and lasagna are the traditional delivery mechanisms for this thick, delicious meat sauce. 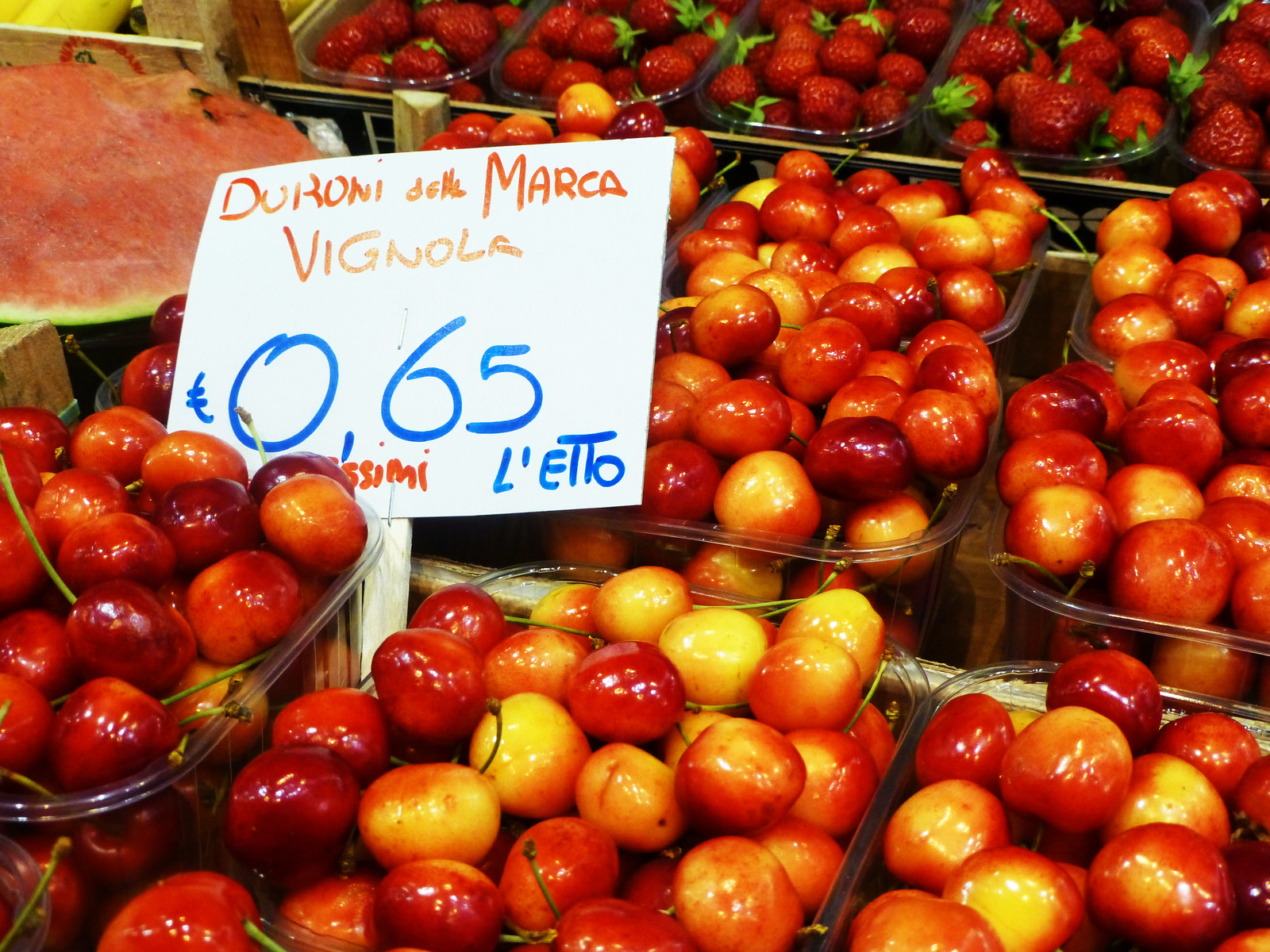 There are approximately 150 varieties of cherries produced throughout Italy (with about 20 considered excellent) and Vignola is one of the top places to try some.

You’ll find the cherries in Vignola and throughout markets in the region (marked by clear signs that proudly proclaim their origins). They come in deep purples and bright reds and a pattern of cream and red. To try these sweet treats at their best, come in late May or throughout June. If you’re here in early June, the Vignola: è tempo di Ciliegie festival (Vignola: It’s time for cherries! Fest) is a riot of cherry-centric wares.

If you miss the cherry season, look for Vignola cherries in jams and brandies.

This slow-ripened sister cheese to Parmigiano-Reggiano has a similarly sharp flavor and grainy texture. If you can’t find Parmigiano itself, Grana Padano is a good substitute (it’s what I’ve been using over pasta while on vacation in a place where the stores don’t seem to have DOP Parmigiano ever in stock).

Like so many other Italian specialties, this cheese was a creation of monks in the Middle Ages and gained popularity over time. Today it’s thought to be one of the country’s oldest cheeses. 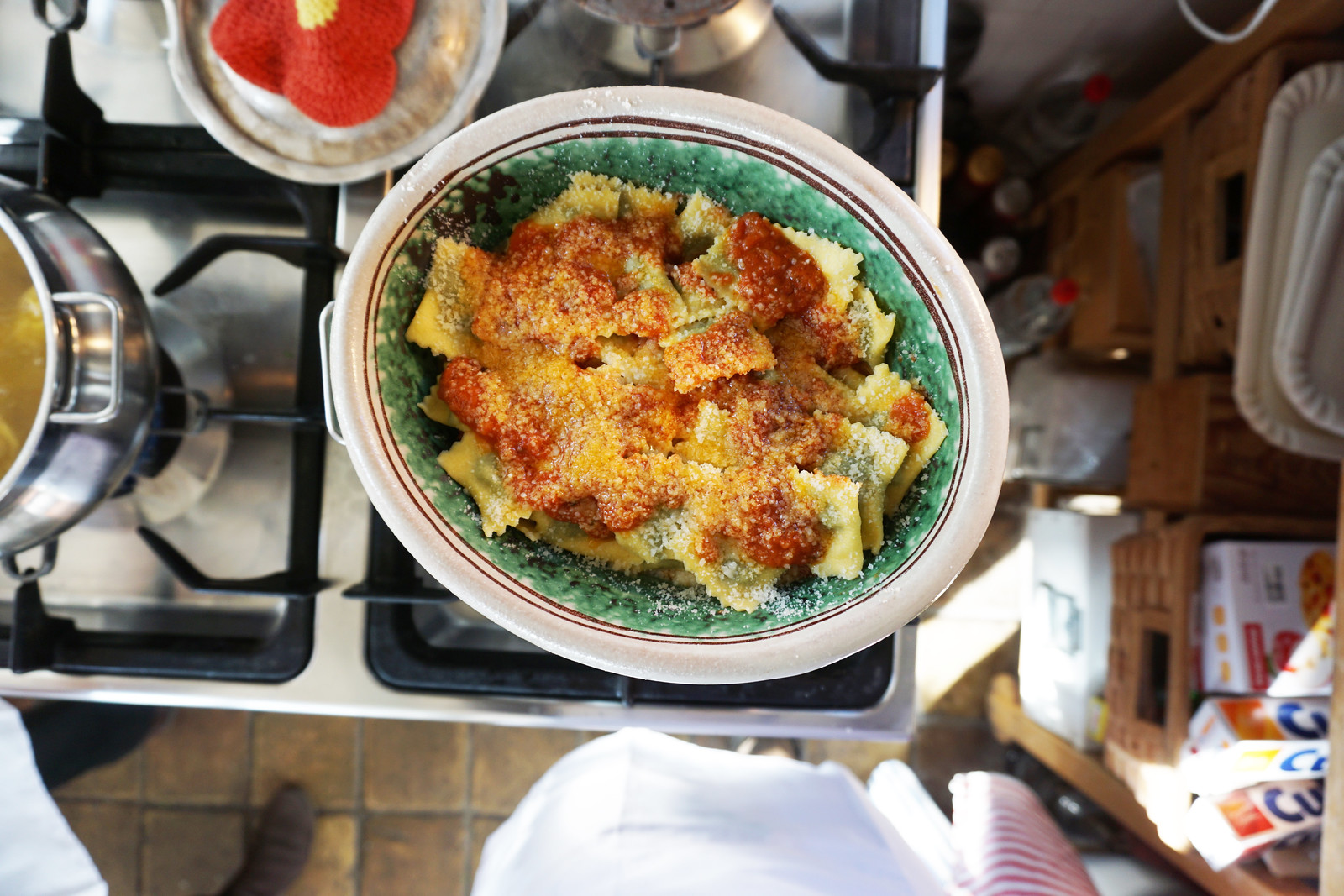 Tortellini isn’t the only stuffed pasta in this region. The place is bursting with them and known for them. There’s tortelli (the larger version of tortellini), plump cappellacci stuffed with squash, little disks of anolini stuffed with beef, and green-colored balanzoni (green because of spinach in the dought). And the list goes on from there. 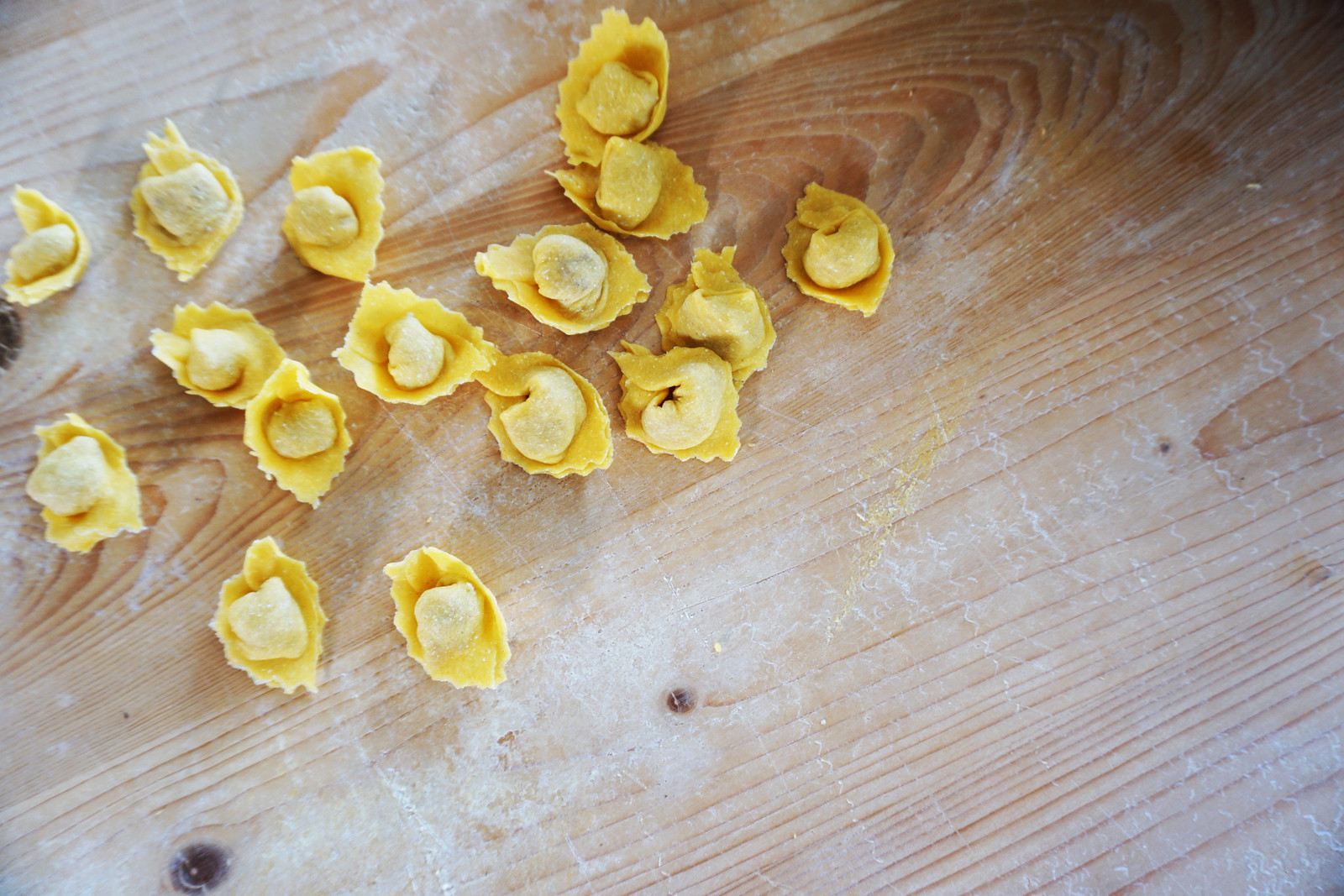 For something super fancy, look for uovo da raviolo. This is the famous egg-yolk ravioli used to test our Master Chef contestants’ skills. The pasta should be cooked while the egg yolk bleeds out like it’s over easy.

Remember Vignola—the one with the cherries? Those plump little orbs are not the only sweet treats the town has to offer. Torta Barozzi is a flourless chocolate cake made with peanuts or almonds (opinions about which is original differ). The secret to this delectable delicacy, says one food writer, is balsamic vinegar.

With meat sauce, cured meats, and chicken broth on every menu is Emilia Romagna also a good place for the vegetarian foodie? I think the answer’s yes. In addition to the famous cherries, you’ve got plenty of cheeses, vegetarian piadina options, and pasta stuffed with ingredients like spinach, cheese, and squash.

Just make sure to ask about cooking methods, as dishes that appear vegetarian at first glance might be sautéed in meat fats.

Gigi Griffis is a world-traveling entrepreneur and writer with a special love for all things European food and adventure. She’s been traveling full-time in Europe since 2012 with her pint-sized pooch and oversized appetite.