London is home to some of the biggest hitters in the Premier League, with clubs such as Arsenal, Chelsea and Tottenham all based in the capital.

As the greatest league in the world drives more and more demand for tickets, for many it’s tough to get inside the ground on match days (according to recent statistics, the Premier League has the one of the highest attendances in Europe, just behind the Bundesliga). If you aren’t lucky enough to see your team live from the stands, London’s streets are full of atmospheric bars where you can watch Premier League action on the big screen.

As such it’s no surprise that the city’s bars come alive every weekend, with locals flocking to their favourite haunts in search of goals and good times.

If you’re in London and looking for a great place to grab a drink and watch a game, here are a few bars you should consider stopping in at… 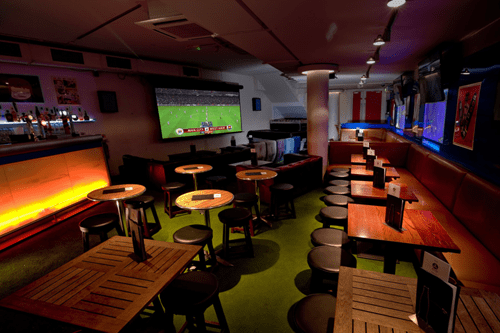 Enticingly named for the weary traveller, Jetlag offers more HD screens than you can count, a fantastic selection of cocktails and ales from around the world and an appetising, international food menu.

They also boast a mammoth 15ft cinema screen ideal for watching the biggest of Premier League clashes. You can book tables in advance, so you needn’t worry about propping up the bar all night.

A couple of big screens offer the fun loving young professionals who frequent the Oyster Shed a chance to keep up to date with all the latest Premier League action.

With one of London’s best views of the Shard and a majestic riverside location, this bar is a great place to watch the big games. There’s plenty of floor space – not something you’ll find often in central London – as well as a private room you can book if you want to catch the football with some friends in a more private setting.

A stone’s throw away from Arsenal’s Emirates stadium ensures that this pub is a favourite with fans of the gunners.

Expect classic English pub food and live screenings of all the big games, served up with plenty of Premier League chat from the knowledgeable locals.

South London is full of trendy neighbourhoods, and Clapham is well on its way to becoming one of the city’s most popular night’s out. The Abbeville is the perfect pub if you want to watch the Premier League’s biggest fixtures, featuring a huge plasma screen TV in the bar area, as well as an even bigger projector in the dining room.

An extensive food and drinks menu has made the Abbeville one of the area’s most popular sports bars. It’s best to book ahead if you want to watch the action from a table seat.