Please note that since the main island, Honshu, has the Japanese Alps spanning from north to south there are countless other ski resorts in the country with great conditions for skiing and snowboarding.

General Tips for Skiing and Snowboarding in Japan

Before I dive into the amazing ski resorts that can be found in Japan let me first cover some general tips you might find useful when planning a ski or snowboarding trip to Japan. 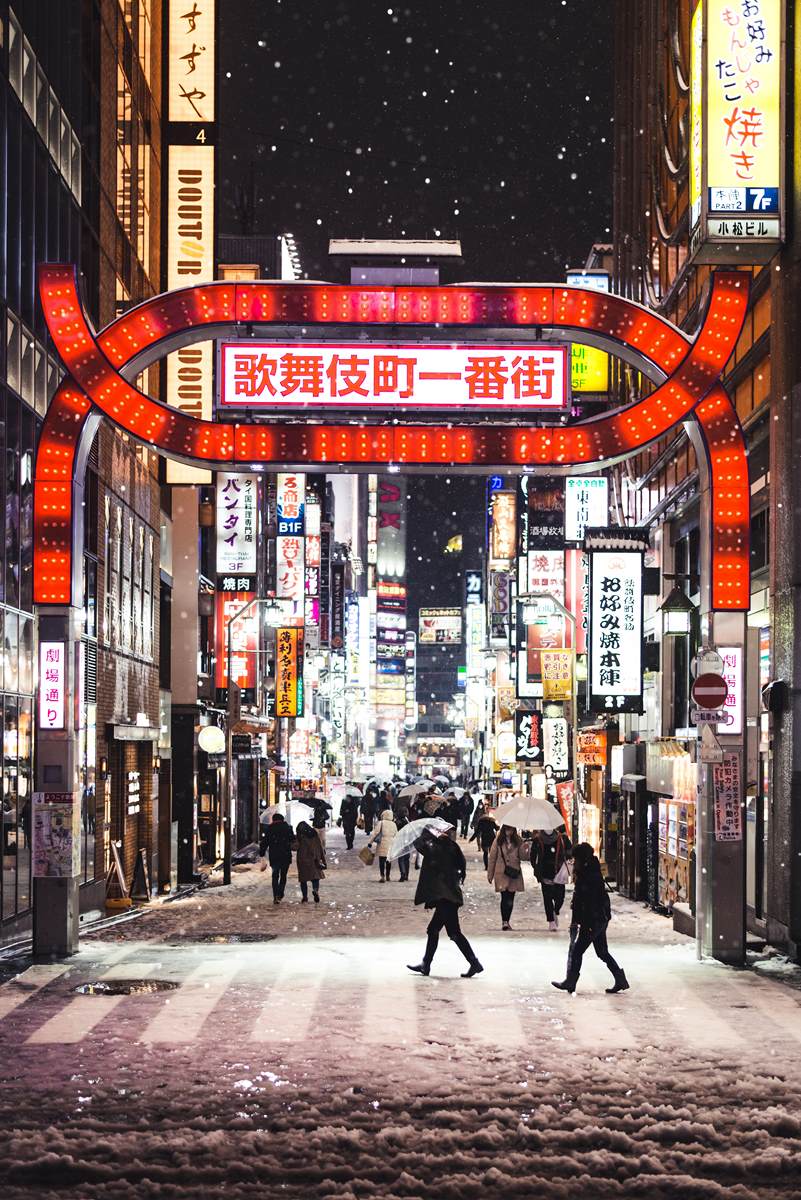 The ski and snowboard season is from around December to April with some resorts on Hokkaido, in the north, even open until late May.

But if you are looking for the best snow Japan has to offer, fresh, dry, fine powder snow, then you should plan your trip from the end of December to the end of February when conditions are perfect no matter where in Japan.

Money-saving tips for your ski or snowboarding trip to Japan

Skiing in Japan isn’t as expensive as some other countries like Australia and New Zealand, but Japan is by no means a cheap country and it makes sense to save money whenever possible, right?

If possible avoid weekends and public holidays to be on the slopes. Not only are the resorts more crowded than on weekdays and you will spend more time standing in line for the lift or gondola, but the lift tickets are generally much more expensive on weekends. The same is true for accommodation, generally speaking.

Look for package discounts. Sometimes your accommodation will be able to sell you lift tickets at a discounted rate and they might also be able to connect you to a discounted rental place close by for your ski, snowboard, and even winter wear.

Sometimes getting your transport, accommodation and lift tickets as a whole package will save you money. Shop around on the internet, for great deals. By the way, the early bird catches the worm. The earlier you book the cheaper it will probably be.

Rather than staying at the overpriced hotel which is directly connected to the ski resort look for a Japanese style guesthouse in town. I know the hotel might be more convenient, but the guesthouse will be an entirely different kind of experience while saving you a big chunk of money.

What to do with your luggage

The best way to avoid stress is to use a semi-rigid suitcase – check this away luggage review for a few great ones – and to send your equipment directly to your hotel from the airport. There are multiple services available and they all charge similar amounts of money depending on the distance your equipment has to travel.

The reverse is also possible. Send your equipment to the airport after your ski holiday and pick it up on the day of your departure from Japan.

By the way, you don’t have to bring your equipment. Renting ski and snowboard equipment and even wear is quite reasonable in Japan and possible either directly at the ski resort or rental shops in the resort towns. The equipment is usually well maintained and of good quality.

Related read: 9 Weird Things That You Can Experience Only In Japan

Now it’s time to dive into 5 popular ski resorts in Japan. They are spread across the country with access to different big cities. I included the best way to get to each resort by public transport. Driving might also be an option in some cases. 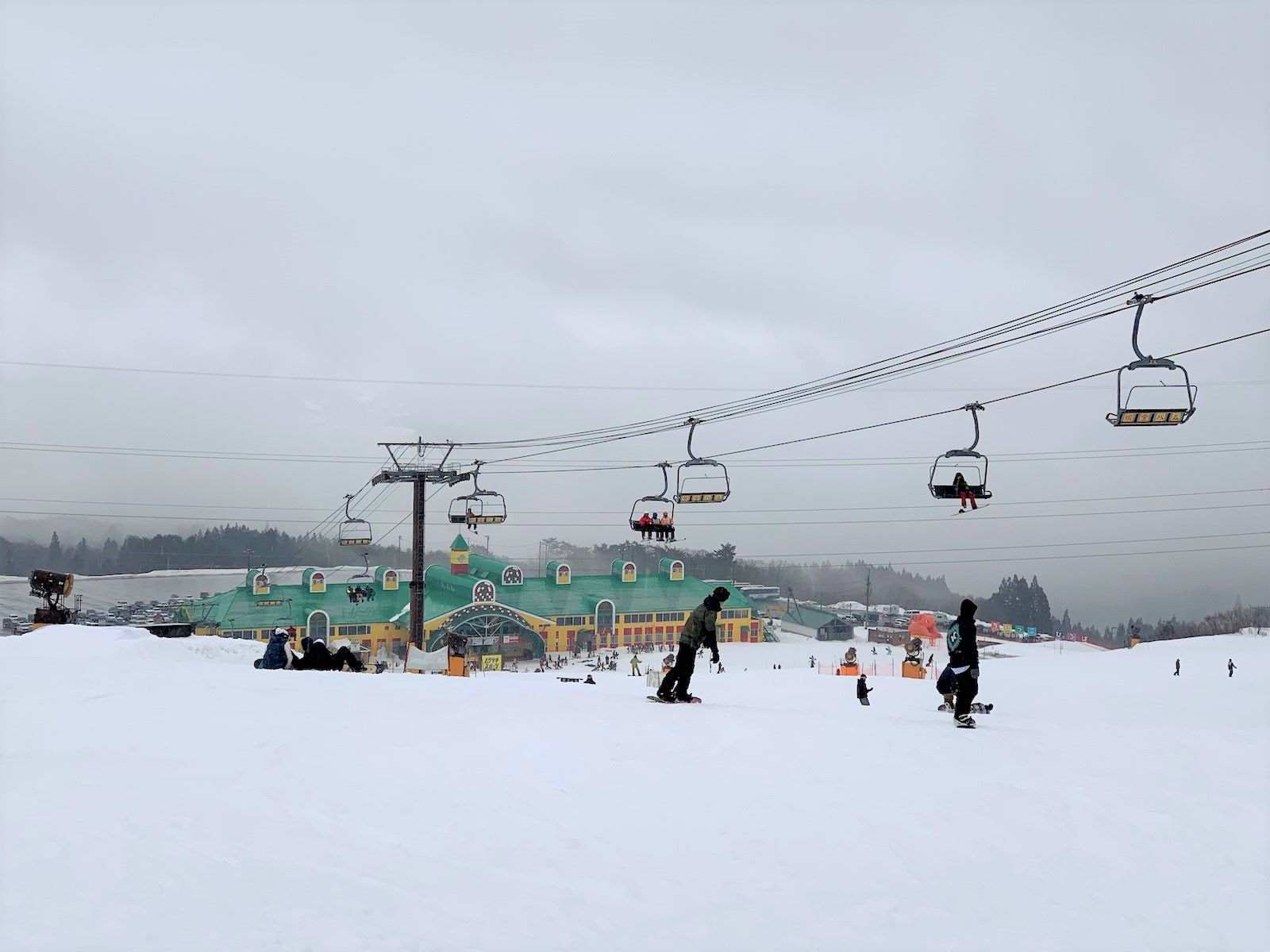 Dynaland and Takasu Snow Park share a mountain in Gifu Prefecture just north of Nagoya in central Japan. Jointly they are known as Dantotsu, and you can access both with a shared lift ticket.

Dynaland on the east side of Mount Dainichi is the biggest ski resort in central Japan with 20 courses in total. Takasu Snow Park is smaller with 12 courses bringing the combined resorts to 32 courses and a total of 43 kilometers.

At Dynaland the courses can be accessed using 5 different lifts while Takasu has 3 lifts and one gondola.

Statistically, there are more snowboarders than skiers at both resorts, with about double the amount of snowboarders compared to skiers. Courses range from beginner to advanced with a well-balanced ratio.

There are all kinds of facilities at both resorts including skiing and snowboarding schools (in Japanese only), equipment rental as well as children’s facilities.

At Dynaland you can enjoy nighttime skiing between 6 p.m. and 11 p.m.

Going by train to Dynaland or Takasu is not very convenient as both resorts are quite far from the nearest station without any shuttle buses running.

Your best option is to take a bus. There are direct buses from Nagoya (5,300 yen one-way) to Dynaland.

Nagoya is one of the places I highly recommend you visit before (or after) your skiing holiday. 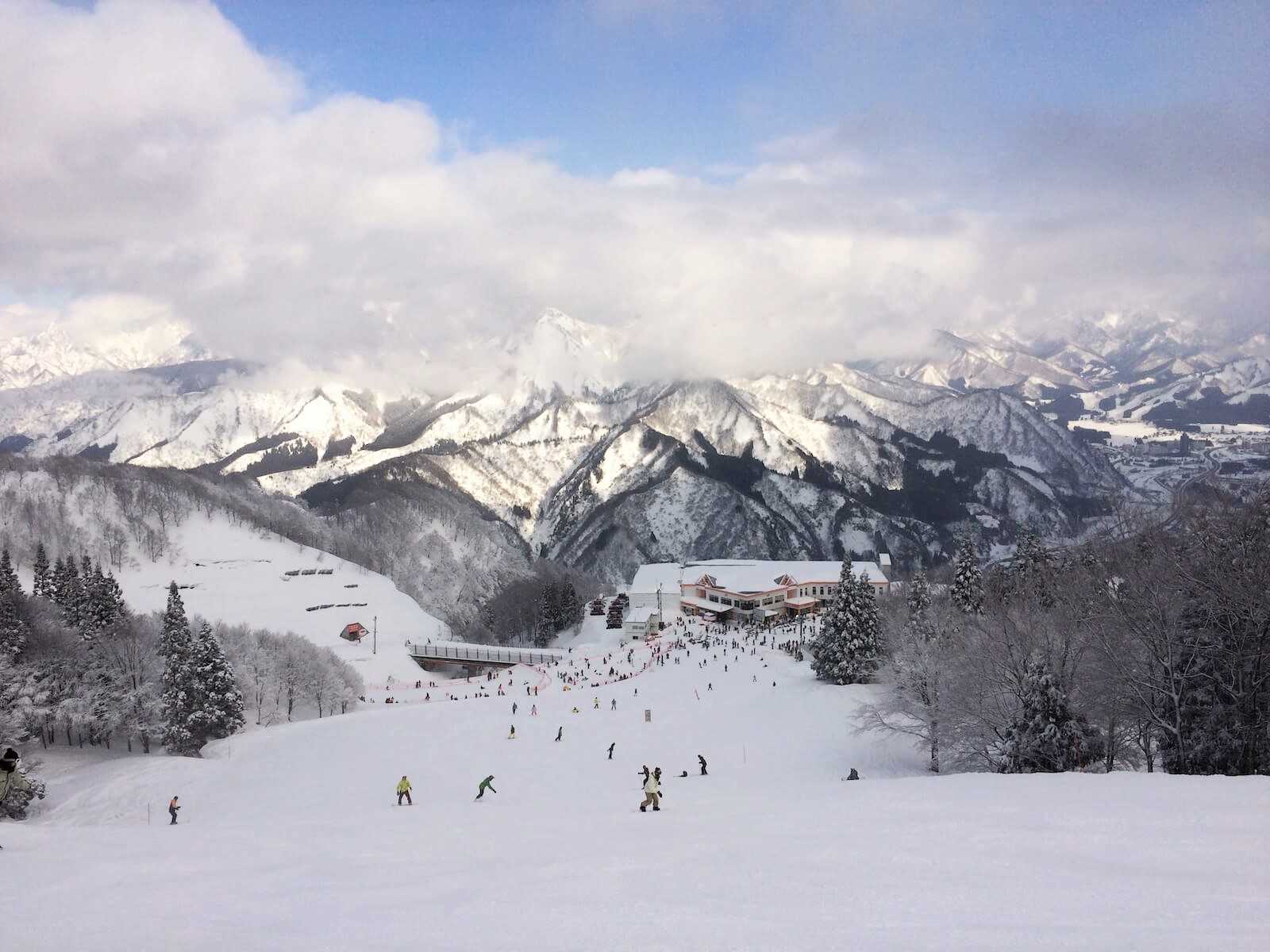 The Gala Yuzawa Snow Resort is the only resort with a Shinkansen station. For this reason, it is the resort most easily accessible from Tokyo.

With 17 courses and a total of 2,5 kilometers of slopes, Gala Yuzawa isn’t the biggest or best now resort in the region, but because of its convenient access, it is the most popular, not only for tourists but also locals who often do day trips on the weekends. The resort has 9 lifts to transport the many guests who visit daily.

Facilities include equipment rental, a ski and snowboarding school (with classes in English), a hot-spring bath and of course multiple restaurants.

During the main season from December to March the price for the one-day lift ticket is 5,000 yen.

The train is included in the Japan Rail Pass, a tourist ticket that allows unlimited train rides on JR trains during a set period.

If you do not have a Japan Rail Pass you might want to have a look at the JR Tokyo Wide Pass which allows unlimited train travel in the wider Tokyo area for 3 days at a cost of only 10,180 yen. The one-way ticket from Tokyo to Gala Yuzawa costs 7090 yen, so the pass can save you a lot of money.

Related read: 20 Useful Tips For Planning A Trip To Japan 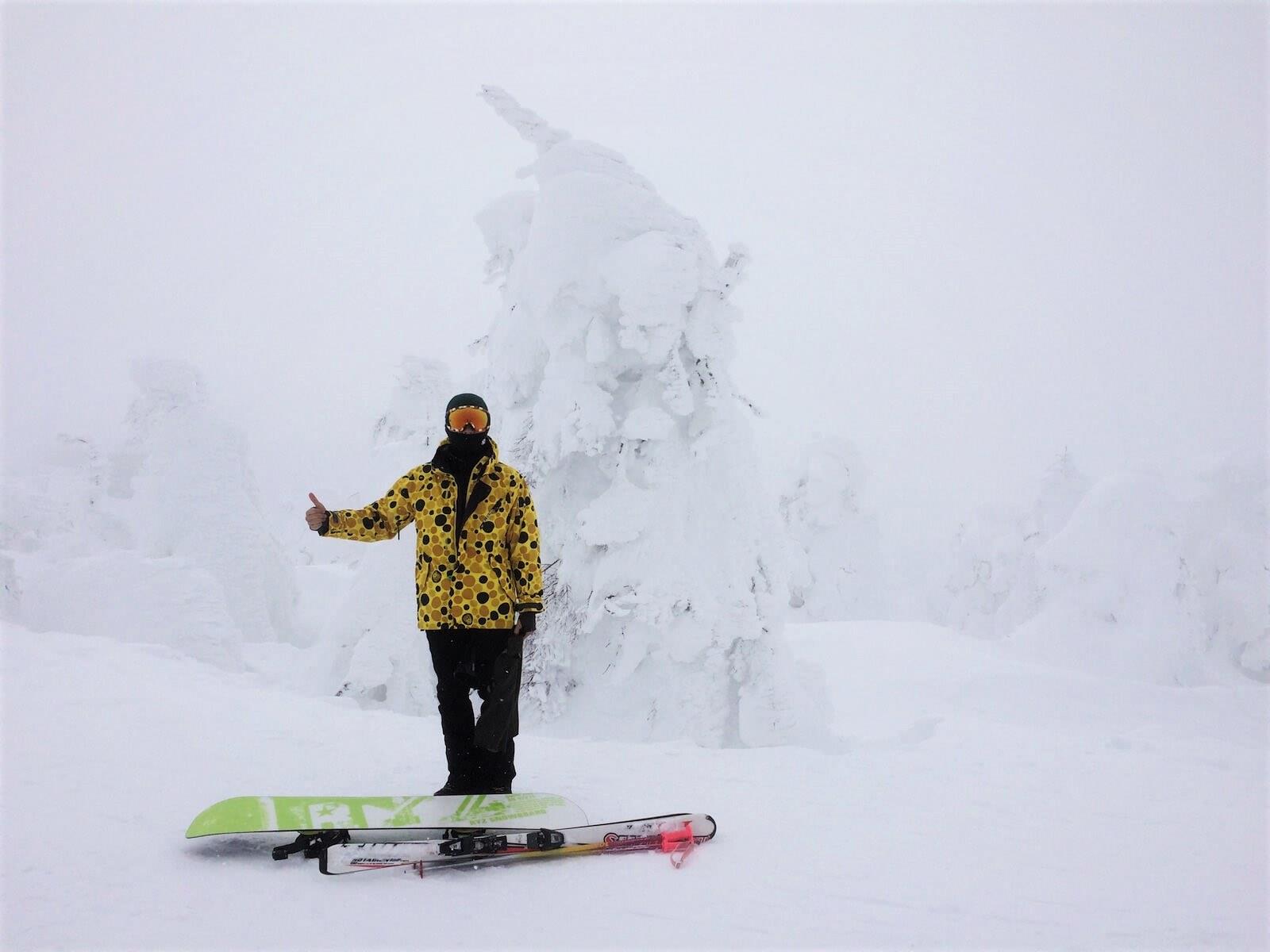 With 35 lifts, 3 ropeways, and one gondola, the Zao Onsen Ski Resort located in Yamagata Prefecture is one of the largest in Japan.

The resort is spread over a huge area and even in the high season on weekends the resort doesn’t feel crowded at all because guests can spread out over the many slopes and areas.

Night skiing is also available at Zao Onsen Ski Resort from 5 to 9 p.m.

The highlight of Zao Onsen is the so-called Snow Monsters or Ice Monsters. Trees covered completely by a thick layer of snow and ice. These Snow Monsters only form in the highest parts of the mountain and only during the coldest time of the year and they are an impressive sight to behold. The best conditions to see the fully formed Snow Monsters are usually around February.

Zao Onsen is also a hot spring resort town with facilities at almost all hotels and even some public Onsen facilities in town.

You can book private ski or snowboarding lessons in English.

From Tokyo, you can access Zao Onsen by train. Take the Shinkansen to Yamagata Station and from there a bus to Zao Onsen. The whole journey takes 3 hours and 10 minutes and costs 12,000 yen one-way. The price for the JR Yamagata Shinkansen is included if you have a JR Pass. You will only need to pay 1000 yen for the bus.

The closest big city to Zao Onsen is Sendai, which might be an interesting stop on the way to the ski resort. Sendai is 2 hours from Zao Onsen and can be reached by train to Yamagata Station and then by riding the bus to Zao Onsen.

Shiga Kogen Ski Resort in Nagano Prefecture is the second highest ski resort in Japan and provides amazing conditions for skiing and snowboarding.

It spans 18 ski areas with a total of 51 lifts and gondolas. The one-day lift ticket costs 5000 yen in the main season.

Night skiing is available in some of the ski areas only. The price ranges from 1600 to 2100 yen.

There are group ski and snowboard lessons in English.

Shiga Kogen is not far from the popular hot spring town Shibu Onsen as well as the famous Snow Monkey Park where you can see monkey bath in hot springs. It is a great option to combine your ski trip with these activities.

To get from Tokyo to Nagano just take the Hokuriku Shinkansen. It takes 1 hour and 20 minutes to reach Nagano Station and costs 8000 yen one-way.

Niseko Ski Resort in Hokkaido is often referred to as Japan’s number one ski resort (although this title is always contested by the other top ski resorts in Japan).

Comprising of 4 ski areas with a total of 33 lifts and gondolas this ski resort is especially famous for its consistently high-quality powder snow.

A one-day lift ticket with access to all areas costs 5100 yen. This includes the night skiing until 8:30 p.m. (from mid-December to late March).

Lessons in English, as well as equipment rentals, are available.

From Sapporo, the main city on Hokkaido, take the train first to Otaru (32 minutes) and from there another train to Niseko (90 minutes).

Otaru is an amazing destination in itself (as well as Sapporo) and they should be considered as sightseeing spots before or after your ski trip.

Related read: 5 Myths And Truths Of Japan You Need To Know Before Traveling There

Final thoughts on skiing in Japan 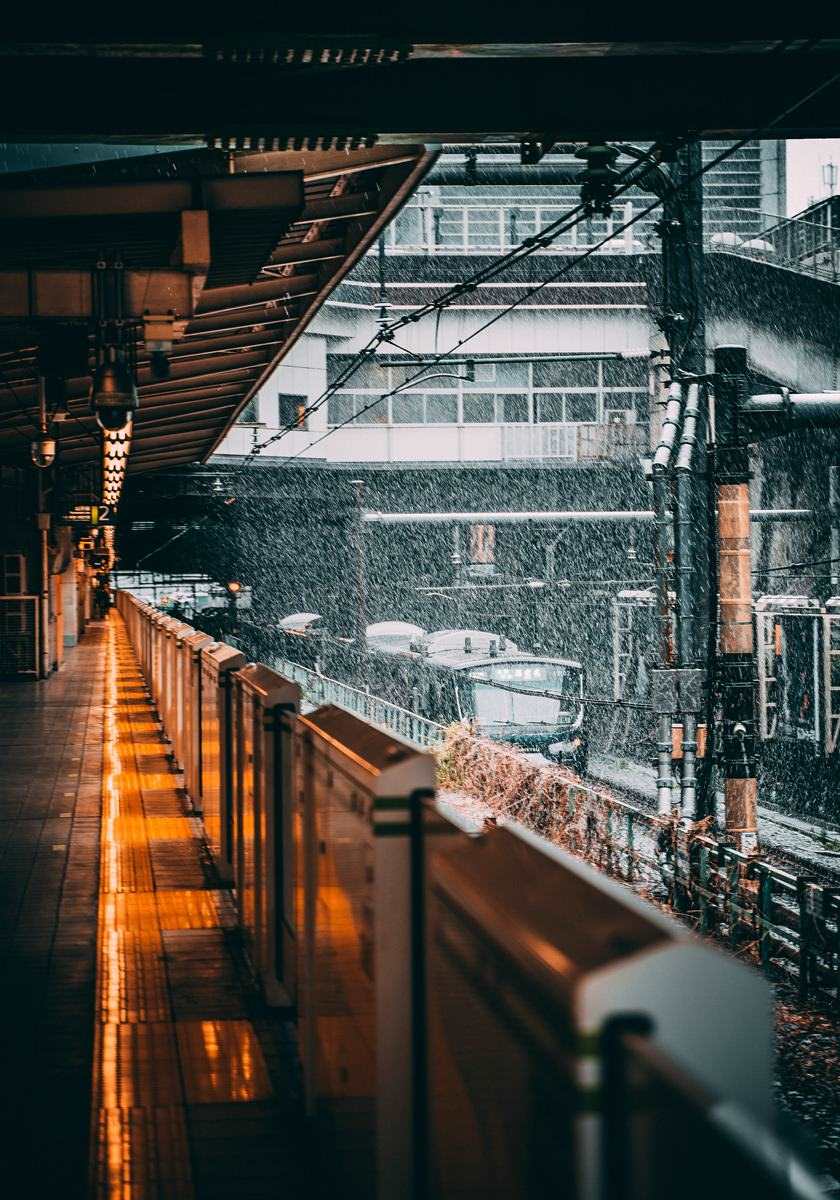 Japan has some of the best powder snow in the world (so much that some people consider moving to Japan for a season or two) and is rightfully a popular snow holiday destination. These 5 ski resorts are only a taste of what Japan has to offer in this regard.

No matter which ski resort you choose you will probably not be disappointed. Just make sure to do your research ahead of time and then enjoy your ski holiday in Japan! 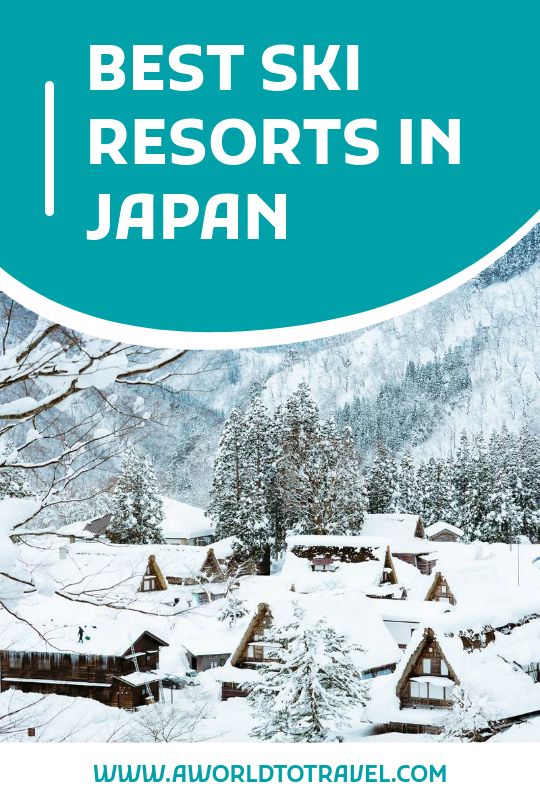 Lena is in love with Japanese food and she wants to share this love with all travelers coming to Japan. Her home Nagoya has a lot to offer in terms of travel and unique food culture which she shares with the world.