10 Most Exciting and Best Places to Visit in Brazil

Do you want to uncover the exquisite beauty of the Tropics? Then travel to Brazil to discover its unique vibe, that makes it stand out from other Latin American nations, and succumb to the beauty of the New World.

Let your travels to Brazil be a new beginning. Latin America’s largest nation spans a myriad of diverse climates and cultures, offering at the same time a chance to see unique natural marvels such as its vast pristine beaches, ferocious waterfalls, sand dunes stretching beyond the horizon, and majestic rivers.

Explore Brazil with our curated list of the top ten best places to visit in Brazil you should not miss.

Brazil’s former capital is where its soul dwells. The city of Cariocas is known for its laid-back and hospitable people, scenic urban landscape, and unrivaled beaches right downtown such as Copacabana, Ipanema, and Leblon.

Travel to Rio to take pleasure in the wide avenues and warm sands of Copacabana, one of the best places to visit in Brazil to socialize with locals; or bask in the sunshine in the cosmopolitan Ipanema a short stroll away from the always bustling Copa. Leblon is a must for those who are keen to experience the inclusive friendly atmosphere of the city, with its carnivalesque vibe all year round, especially prized by arguably one of the world’s largest gay communities.

If it is not just sand and breaking waves that make you happy, head to Lapa. This is one of the best places to visit in Brazil to delight in jazz music with possibly Latin America’s best jazz bars, and its world-famous Escadaria Selaron, a set of world-famous steps made by Jorge Selaron whose work, seen a bit wacky at first, ended up becoming one of Rio’s top landmarks.

Other sites to visit in Lapa include its delicious restaurants and a splendid aqueduct, which along with Jesus, on the Corcovado mountain, and the famed somewhat unsafe but super photogenic favelas, such as Vidigal, make the top of the best places to visit in Brazil. 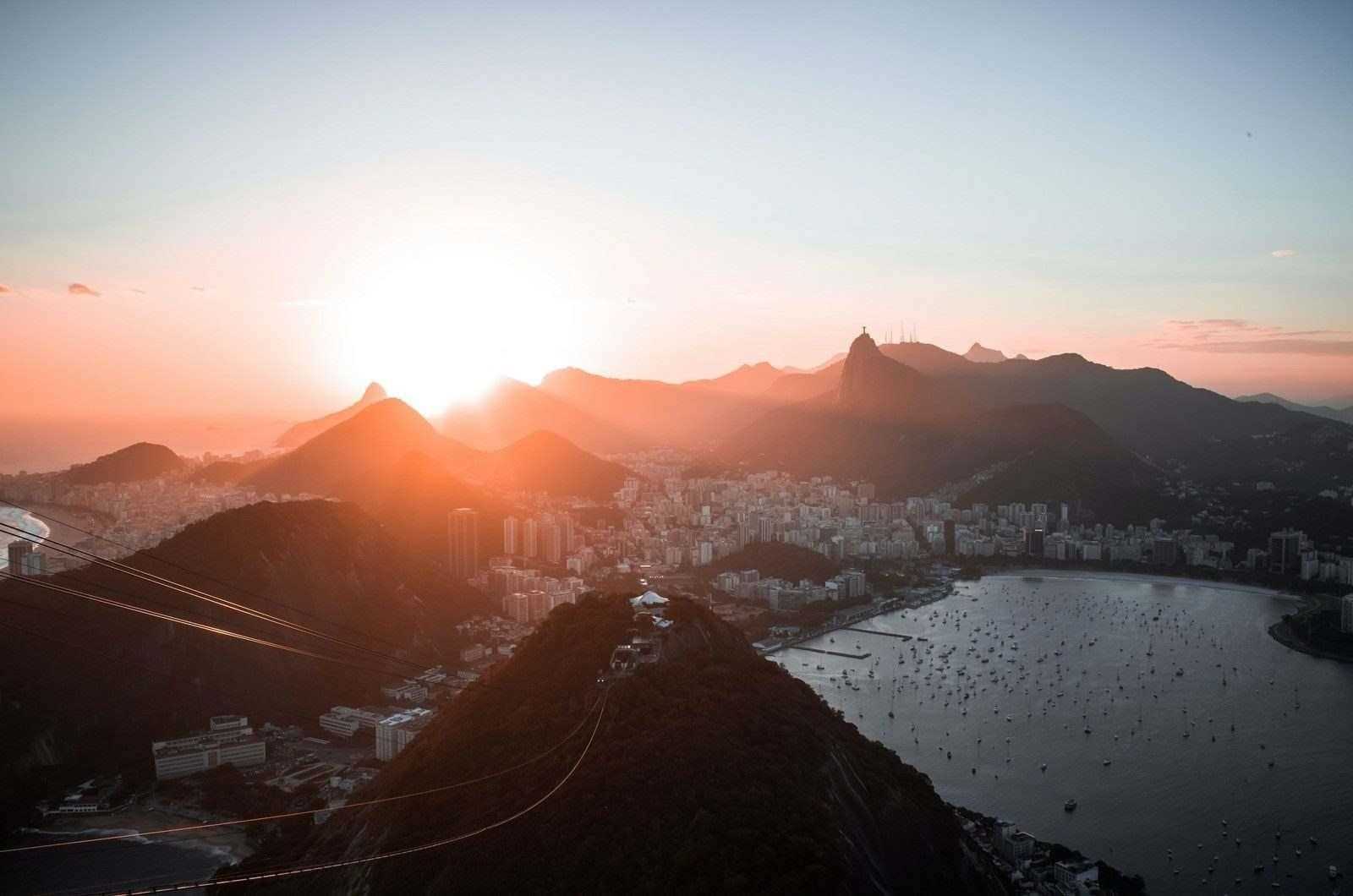 Those keen to uncover the true spirit of Rio must give in to the magic of football. Headfirst to Botafogo Beach, where football is played even at night (don’t forget to climb Sugar Loaf, suitably near, for a perfect walk through the mont’s lush greenery and truly gobsmacking vistas), and go to a weekend football game at the iconic Maracana Stadium, the arena where Pele himself was scoring goals.

Note that the best time to visit Rio de Janeiro is in February when the legendary Rio de Janeiro carnival takes place. But avoid it like the plague if crowds and busy festivals are not your cup of tea.

For inspiration, one of the best books to read on a trip to Brazil is Brazil by Jonathan Updike, a magic realist love story set in Rio, Sao Paulo, and the Brazilian jungle wilderness. 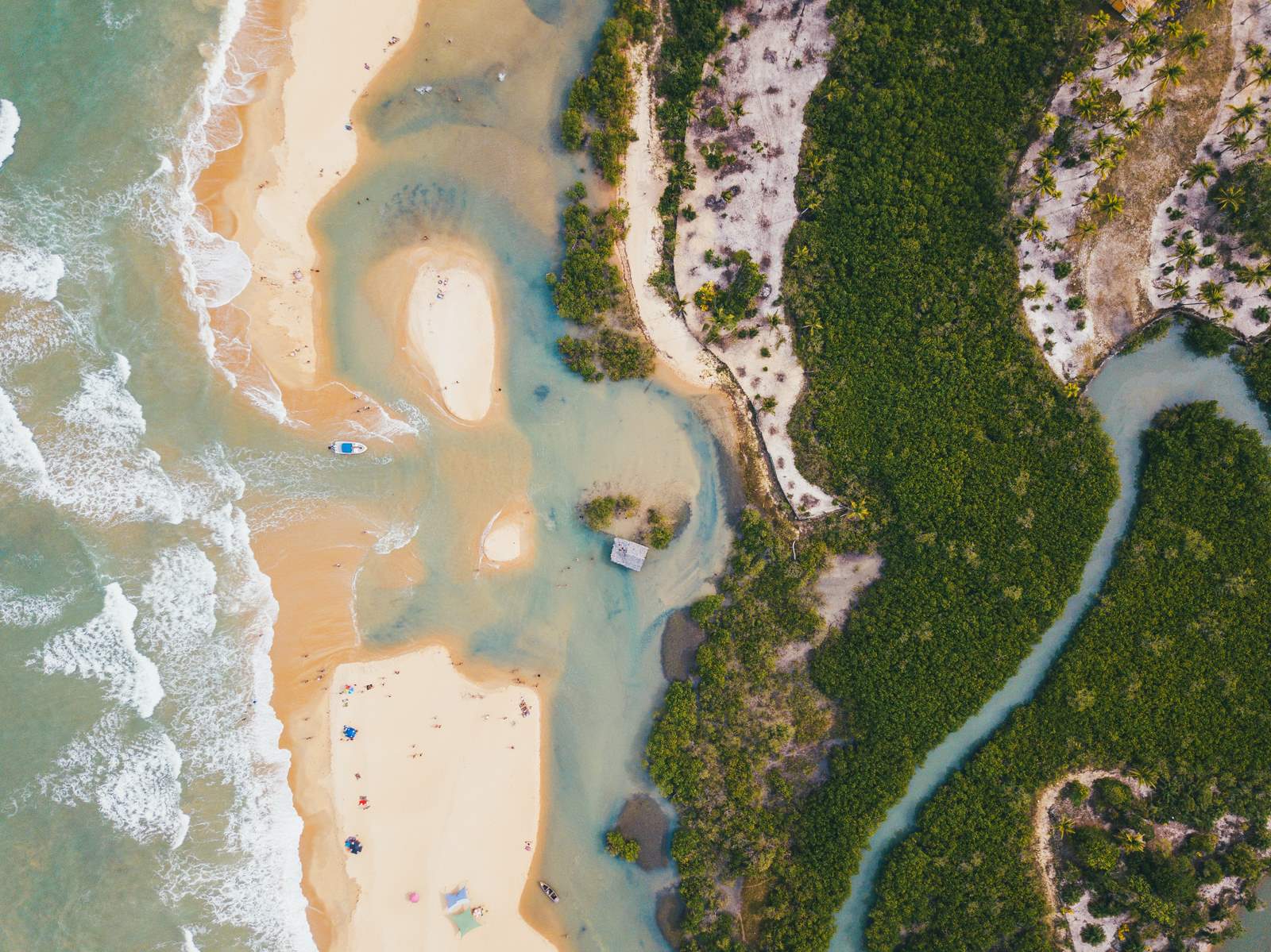 Large cities such as Rio are fascinating: they have something for everyone, but their hustle and bustle can be tiring at times. If a bit fatigued, head to a veritable tropical idyll, Trancoso, located in the northern state of Bahia, the heart of Black Brazil. Trancoso is renowned for its capoeira, caipirinha, and unique cults some of whose rites were brought by the ancestors of Black Brazilians from Africa.

Trancoso is arguably the best place to visit in Bahia to laze about on the beach and chill. It is quiet, safe, affordable, and truly paradisiac. It has a vast stretch of white sand, cozy bars, friendly locals, and its environs feature one of Brazil’s most beautiful churches. Also don’t miss out on the chance to book accommodation at an authentic Bahia bungalow located right on the main square.

Pay a visit to Porto Seguro, a great place to rest on the road from Rio de Janeiro to Salvador de Bahia.

Located just a short car ride away from Trancoso, Porto Seguro is a great place to explore Bahia. It is situated close to both pristine beaches of Trancoso and Brazil’s first capital, Salvador. But, primarily, it is known as the place where the Portuguese first landed in what was to become Brazil. The spot is marked by one of Brazil’s oldest churches, one of the best places to visit in Brazil to uncover its past.

On the other hand, Porto Seguro is located just a half an hour’s drive from Pataxó, where the remaining Native Indians of the region accept visitors to learn about their culture. 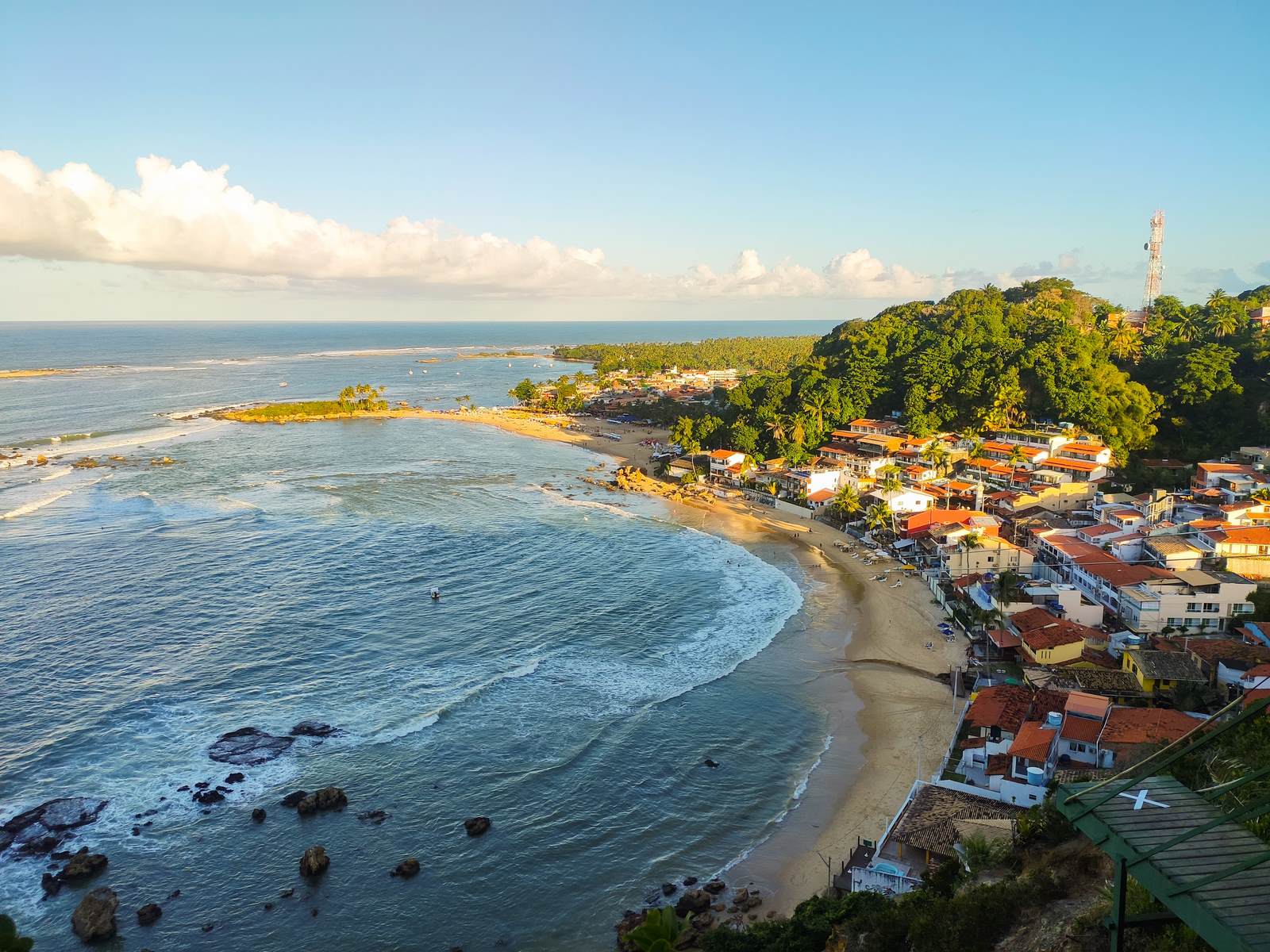 Head to Morro de Sao Paulo to take a break from the crowded Brazilian metropolises and take delight in its communion with nature.

Lying off the coast of Bahia and a two hours’ ferry ride from Salvador, is Tinhare Island. Its capital is one of the best places to visit in Brazil. It is here that the distinctive village Morro de São Paulo is situated.

Sitting on its north-eastern tip, the car and carefree village is prized for its climate, traditional means of transport such as animal-drawn carriages and palm-fringed beaches. Among them, do not miss First Beach, frequented for its strong surf, and Second Beach, dotted with mouth-watering food establishments.

Apart from the stunning landscape, and great swimming opportunities, Morro de São Paulo is also home to some significant historical landmarks such as the Fortress of Tapirandu, one of the best places to visit in Brazil to uncover its colonial past or the Church of Our Lady of Light, famous for its intricate altar made of wood. 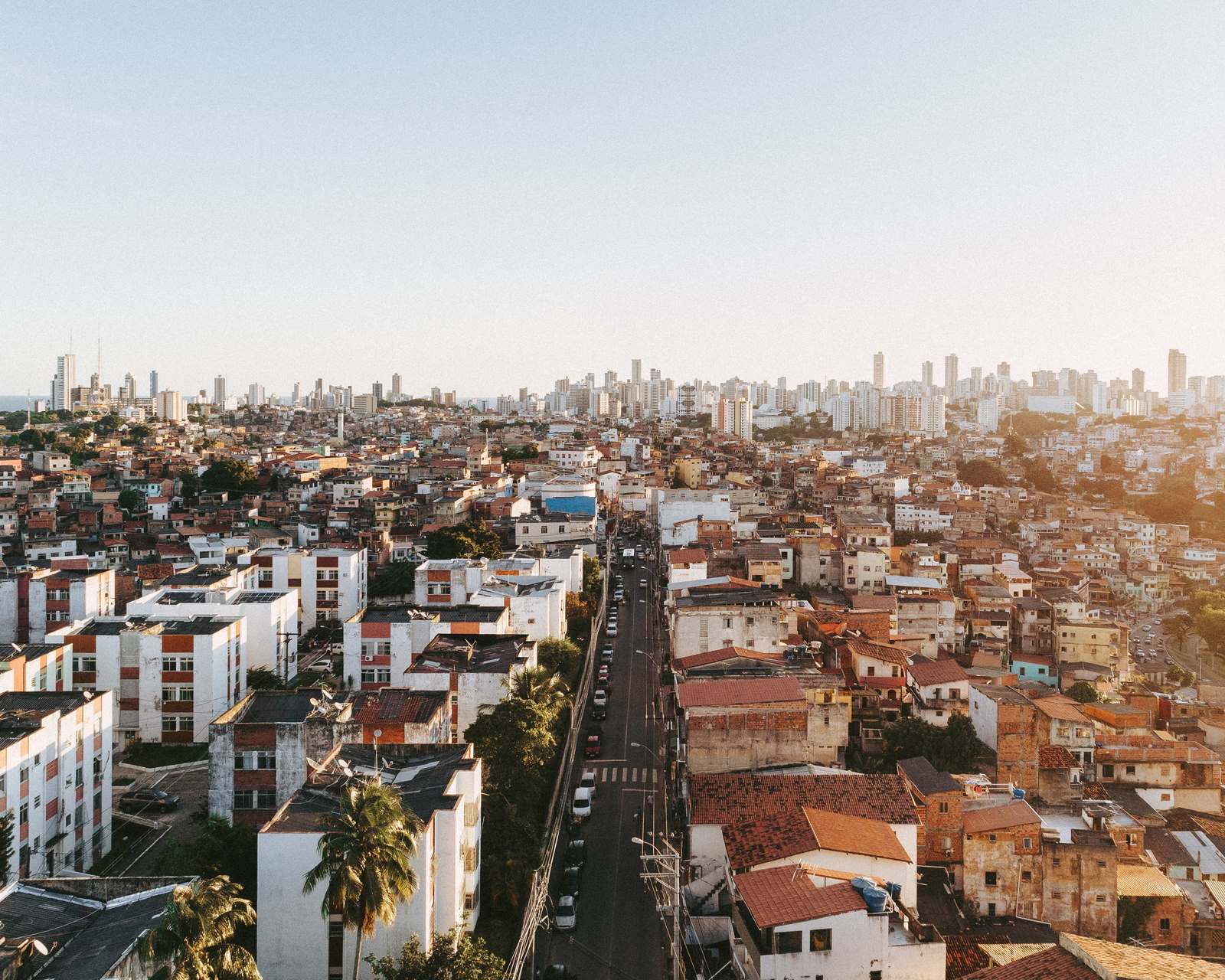 Brazil’s first capital, Salvador is dubbed the city of 365 churches, one church per day of the year. Its abundant wealth of historical landmarks, picture-perfect nature, and kinetic nightlife, seducing with its Capoeira, and trans-inducing drum-beat, make it one of the best places to visit in Brazil.

Head to Salvador if the modernity of Rio and Sao Paulo is not what your soul has been pining for. Here you can stay in the old colonial downtown, for example on the scenic Rue de Chile, with a mind-blowing port-view, where streets lure you with mesmeric sights, hypnotizing sounds, and strange fragrances – make sure to have your best travel camera on hand at all times. 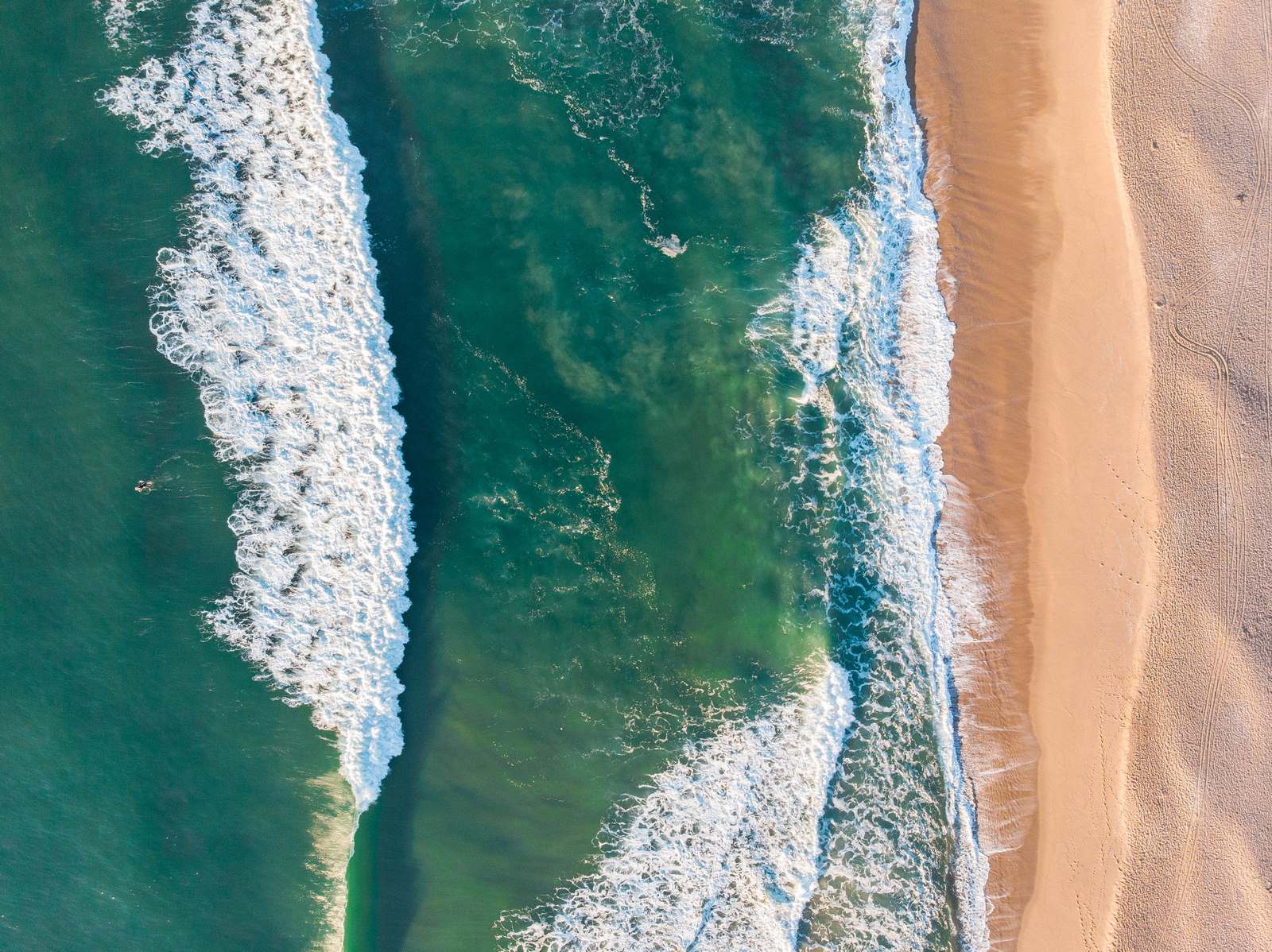 Is there a need to go to Rio or São Paulo? The irresistible pull of their nightlife, food & bar sceneries, and phenomenal nature are truly enticing, but it is not just Brazil’s big cities that have it.

Florianopolis, the surfing paradise in Brazil’s South, is one of the best places to visit in Brazil to go surfing, lazing around on the white sands, attending some of the Americas’ best parties, and eating its delicious food. Plus its juicy churrasco is said to be among the Brazilian South’s best!

It is also advantageously located close to Porto Allegro, a large city known as the jewel of the Brazilian South, home to the world’s most beautiful street, Rua Gonçalo de Carvalho, otherwise the green tunnel, a 500-meter stretch submerged in foliage. 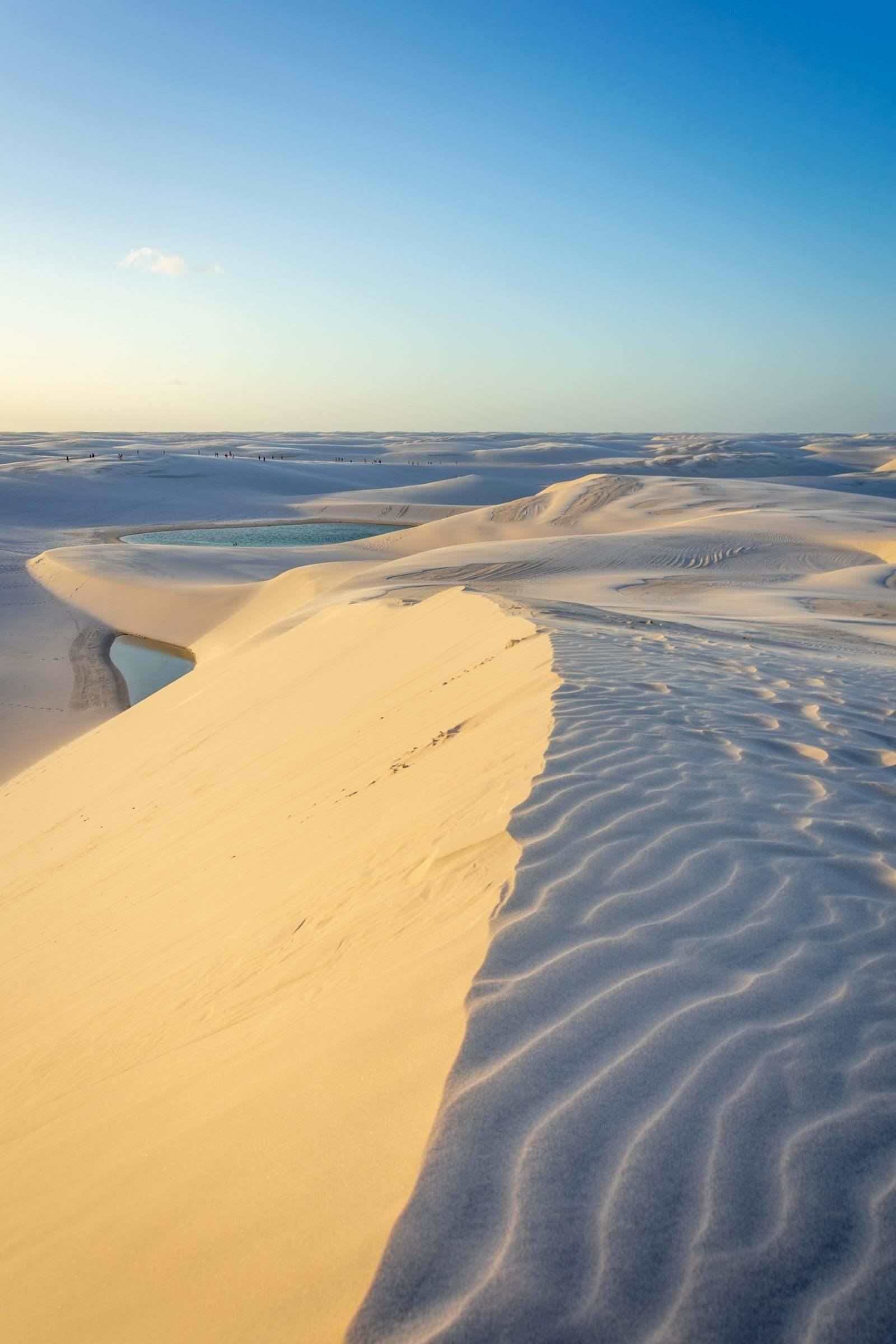 Located in Maranhao State, the awe-inspiring sand ridges morph into a thousand blue lagoons running along the Atlantic Coast. They are part of Lencois Maranhenses National Park, one of the most stunning and overall best places to visit in Brazil.

The majestic sand mounds are nature’s artwork: it is made by two rivers flowing through the natural reserve depositing sediment as they run towards the Atlantic. But it is not just the wash-up that forms the dunes, it is also the winds from the Atlantic that blow inland and carry the sand, co-authoring the oeuvre.

Note that the capital of Maranhao State is the beautiful and quiescent Sao Louis City, with Bareirinhas, the closest town to the dunes being the best place in the country to visit the magnificent hills of sand. Traveling to Maranhao Natural Park is also a great reason to uncover the North of Brazil, a gateway to one of the world’s largest rainforests, the mighty Amazon. 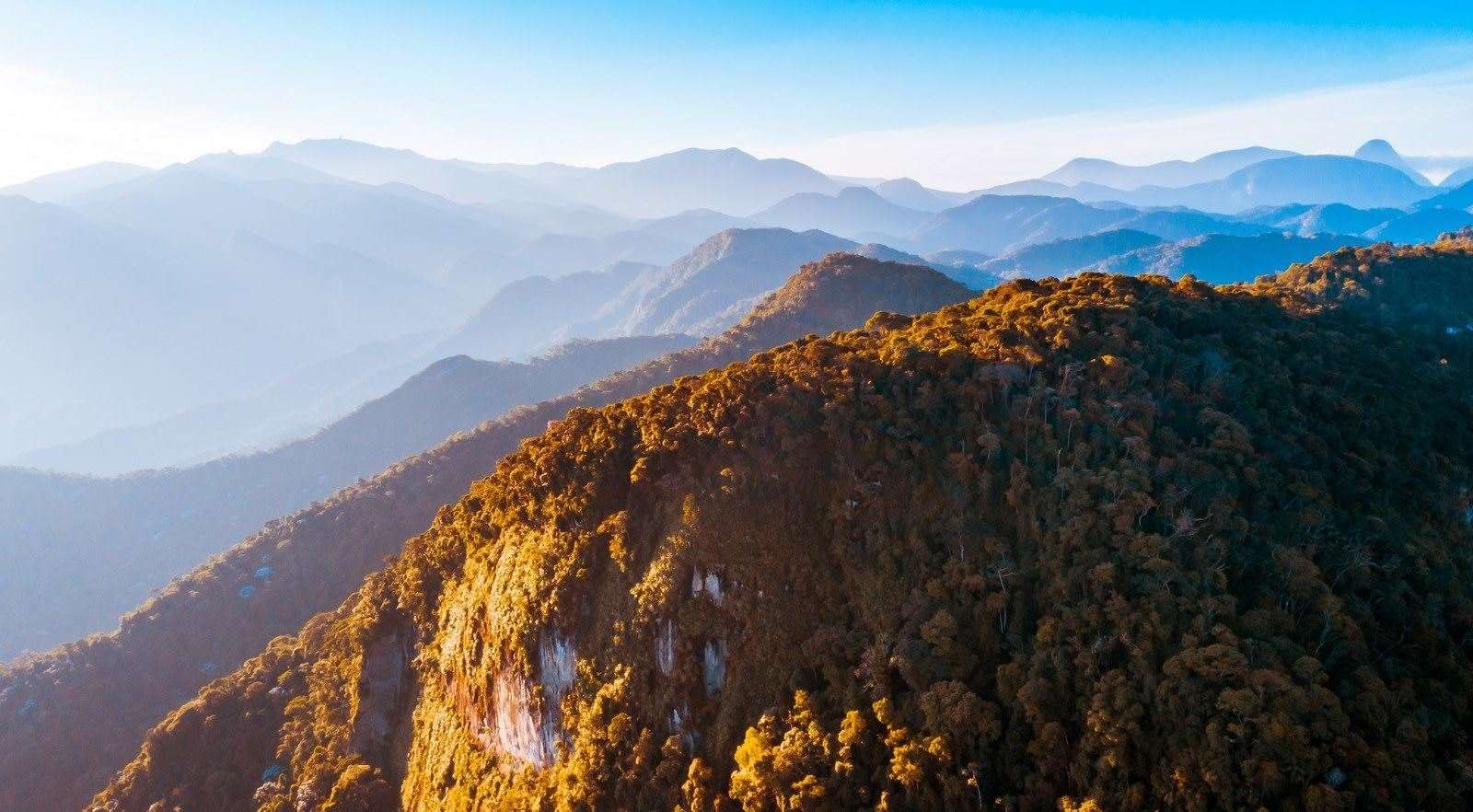 Petropolis is one the best places to visit in Brazil in summer. When it is winter in the northern hemisphere, it is scorching hot in Brazil. The inhabitants of Rio prize Petropolis for its mild climate, stunning architecture, delicious cuisine, and romantic bars & accommodation.

In their appreciation, they follow in the steps of the Brazilian emperors who made the hill station their summer retreat of choice. It is from them that are left what are arguably Brazil’s most fabulous palaces, such as Petropolis Imperial Palace, currently housing the Imperial Museum, and offering a peek into the state’s opulent imperial past.

Note that Petropolis is located close to Serra dos Orgaos National Park, one of the best places to visit in Brazil for hiking. 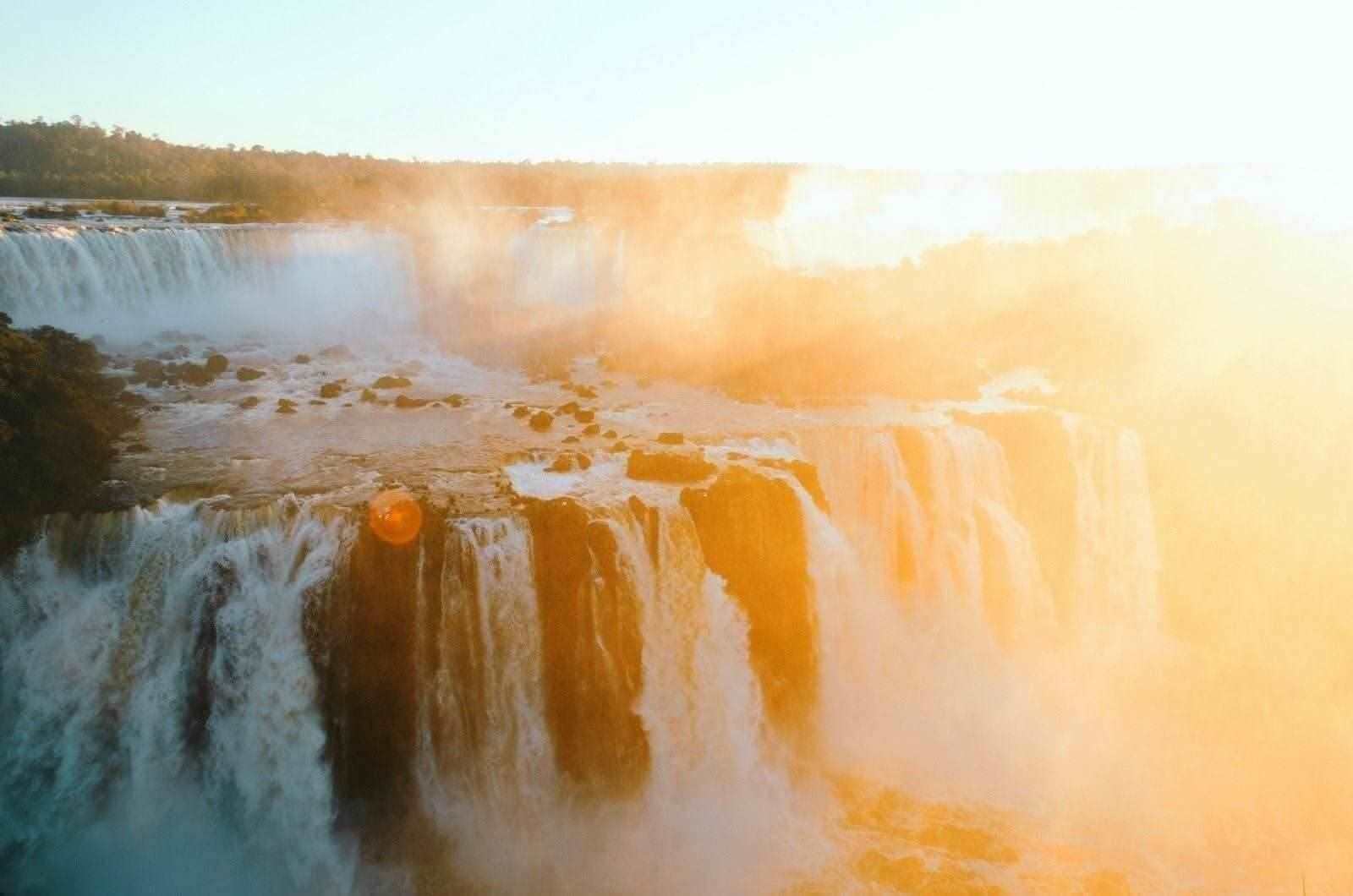 The Iguazu Falls are considered the largest waterfall in the world. Located amidst the primal Amazonian rainforest, this cascading nature marvel is undoubtedly one of the best places to visit in Brazil.

To travel here, head first to Foz do Iguaçu city, a pleasant hub to explore the waterfalls and the surrounding beauty of the state of Parana. From the airport, it is just a 5-minute drive to the Brazilian side of the falls.

Argentina and Paraguay are just over the border, making the falls one of the best places to visit the two countries from Brazil. Note that the best time to visit the Iguazu falls is between late March to May. 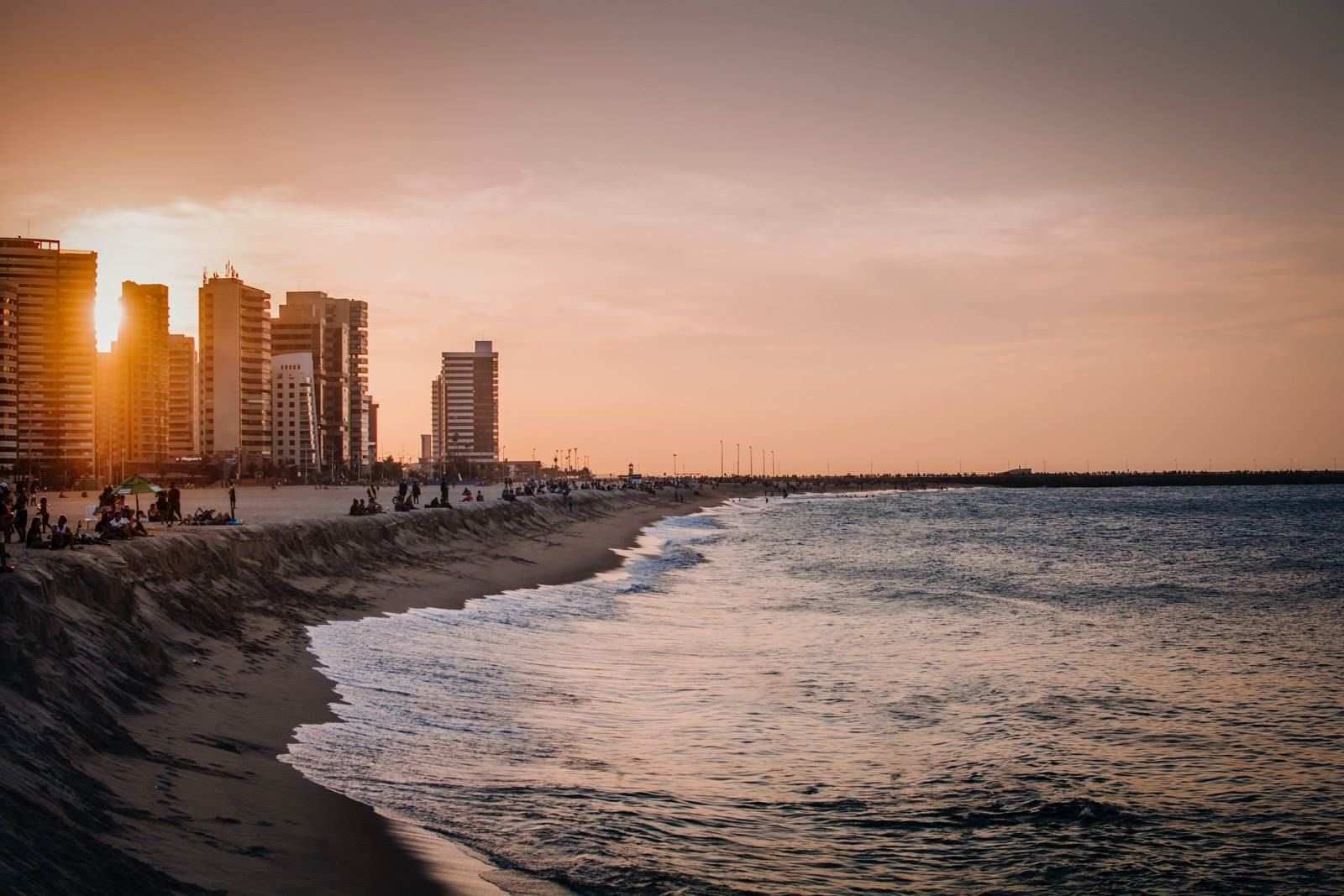 Fortaleza is one of the best places to visit in Brazil to see for yourself its booming night scenery, taste its delicious food and bask in the sun on its sun-lit beaches punctuated by red cliffs, lagoons, rustling palm trees, and highly surfable waves.

Keep in mind that it is not just the memorable modern cityscape or the enthralling nature riches that lure. So are the attractions of Fortaleza, such as the performances at the Art Nouveau José de Alencar Theater and the neo-Gothic church architecture of the Metropolitan Cathedral, which draw visitors to Fortaleza, one of the jewels of northern Brazil.

Brazil is a great country to visit and enjoy the tender caress of the sea, the relaxing whisper of palm trees, and the pleasant urban landscape, sometimes colonial and other times ultra-modern.

It is also a great destination to enjoy the company of the hospitable locals, and the perfect one to explore on a road trip!

All this well paired by cachaça, caipirinhas, and churrasco while listening to the melodies of the Brazilian rumba or witnessing a fierce Capoeira dance. Enjoy! 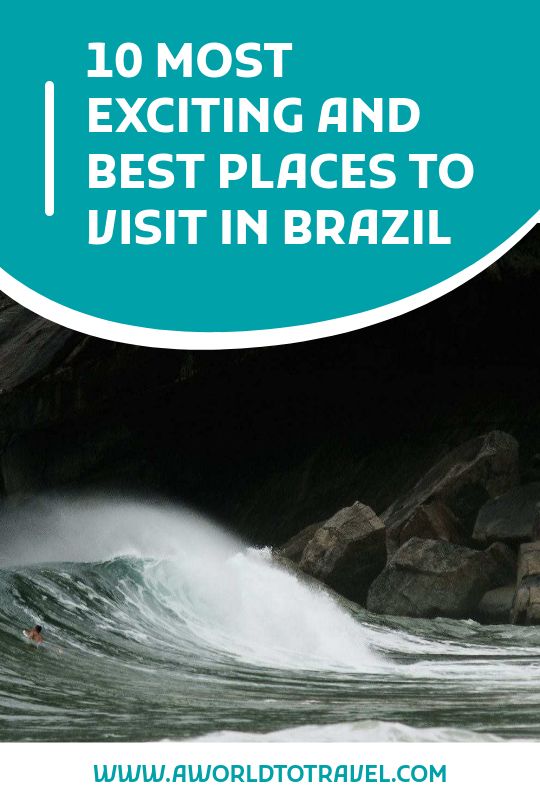 Samantha Karen is the founder of the travel bog Sam Sees World. She is a millennial traveler on a mission to seek the new and unknown so she can document her experiences and inspire others to explore this wondrous world. Her objective is to provide valuable information on the best things to do, see, eat, and experience while traveling and making memories along the way.