Barcelona is known for its surreal and majestic architectural presence, which has been recognized by the UNESCO among others. Engineers, travelers, architects, and artists alike, make their way to Barcelona to visit the innovative and marvelous buildings of Antoni Gaudi and other renowned architects. Here are 15 astounding structural designs worth a visit in Barcelona.

Metropolitan’s cathedral is among the most impressive architectural marvels and the center point of Barri Gotic, built between the 13th and 15th centuries. The cathedral is known to be dedicated to Barcelona’s patron Saint, Santa Eulalia. It presides a huge square which was once the site of a Roman Temple, and its spikes rise above the immediate cityscape. A great view of the city can be witnessed from the top of the cathedral’s roof.

A good time to visit Barcelona Cathedral is during the Merce Festival, which is considered to be the most traditional holiday of the city since 1871. One can visit this cathedral in the morning or early evening free of cost.

Gran Teatre Liceu, also known as Barcelona’s opera house, was built in 1847 and ever since it has been one of the cultural symbols of the city. Located on the Rambla, the Liceu is known to host symphony concerts and major operas. Destroyed by a fire in 1994, Gran Teatre Liceu was reopened after a brilliant reconstruction in 1999. Today, it is again one of the world’s largest opera houses with a seating capacity of 2,292.

Major highlights of Gran Teatre Liceu include its main auditorium, the hall of mirrors and the foray. The right time to visit the opera house to witness dance, music, and opera is between September and July.

The Barcelona Pavilion was designed by Ludwig Mies van der Rohe and Lilly Reich as the German National Pavilion for the Barcelona International Exhibition held in 1929. The building is an example of ideal modernity expressed through geometry and the clarity of the assembly. On the other hand, the architectural design is in its simplest form built using extravagant materials like marble, travertine and golden onyx. The Barcelona Pavilion’s been an inspiration for many modern buildings and is a must visit spot for everyone in love with – apparently – simple architecture.

Diagonal Mar Park was designed by architect Enric Miralles and opened in 2002. Its design optimizes the use of a renewable source of energy to meet its energy demands. A wasteland converted into a residential area with great shopping and sports facilities, situated just 20 mins from the Barcelona City Centre. One of the main attractions of Diagonal Mar park is an enormous contemporary park which manages to successfully combine nature’s architecture. It’s a perfect place to pop over towards the end of the day to relax and unwind.

It hosts a series of classical music concerts each year during the month of August on Thursdays. 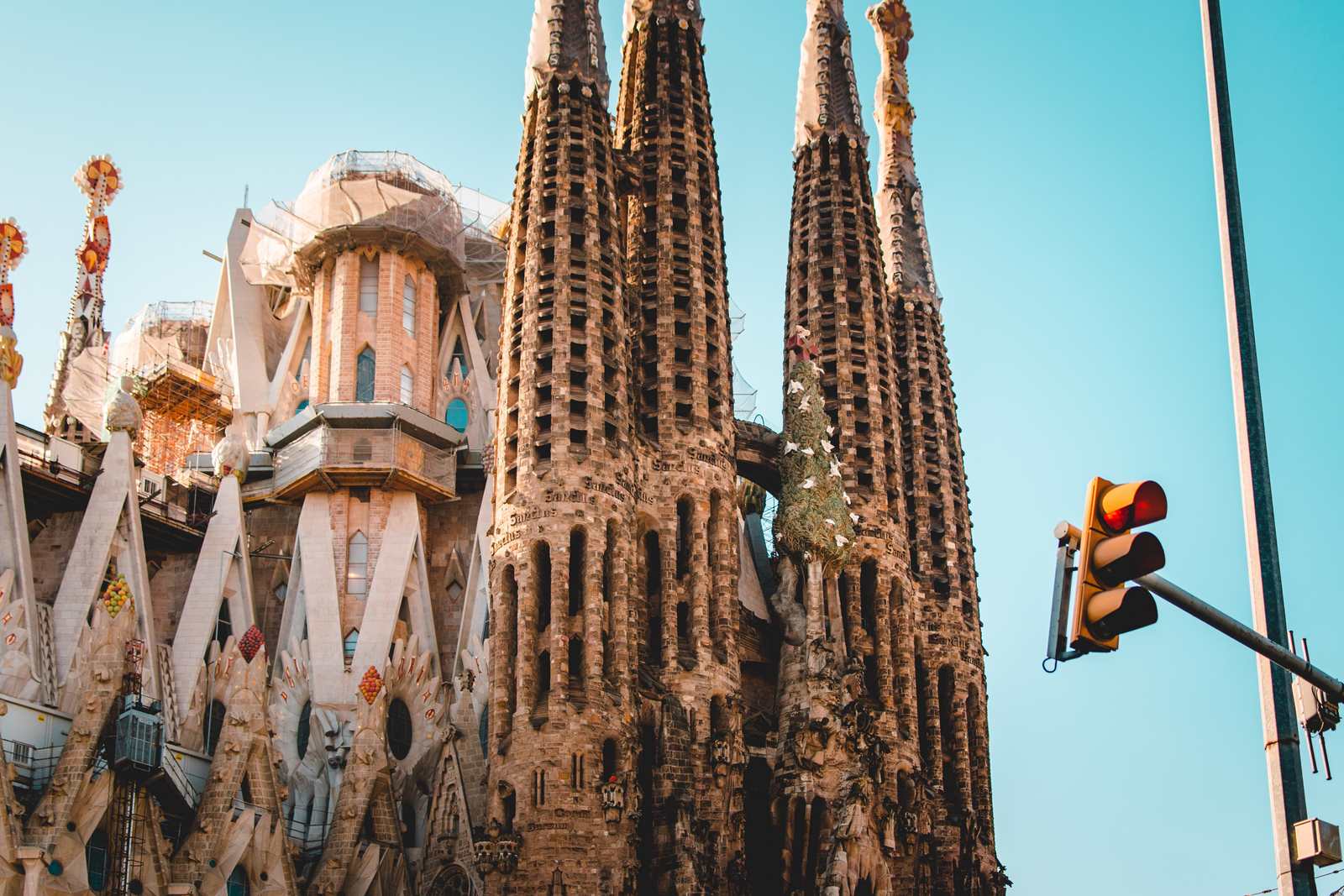 The Sagrada Familia, one of the most impressive churches in the world was started in 1882 by Francisco de Paula del Villar. Soon after, it was taken over by Antoni Gaudi, who transformed the designed with his own architectural Gothic style. Post the demise of Gaudi, the project was attempted by many architects to continue his legacy, but the construction faced a huge setback over the years and the church is still under construction – likely to be finished by 2026. In addition to many other architectural buildings, it was declared a UNESCO World Heritage Site.

The best time to visit the church is early morning or before sunset to witness the sun shining through the stained-glass windows reflecting on the walls with beautiful colors. Its opened throughout the year for visitors. 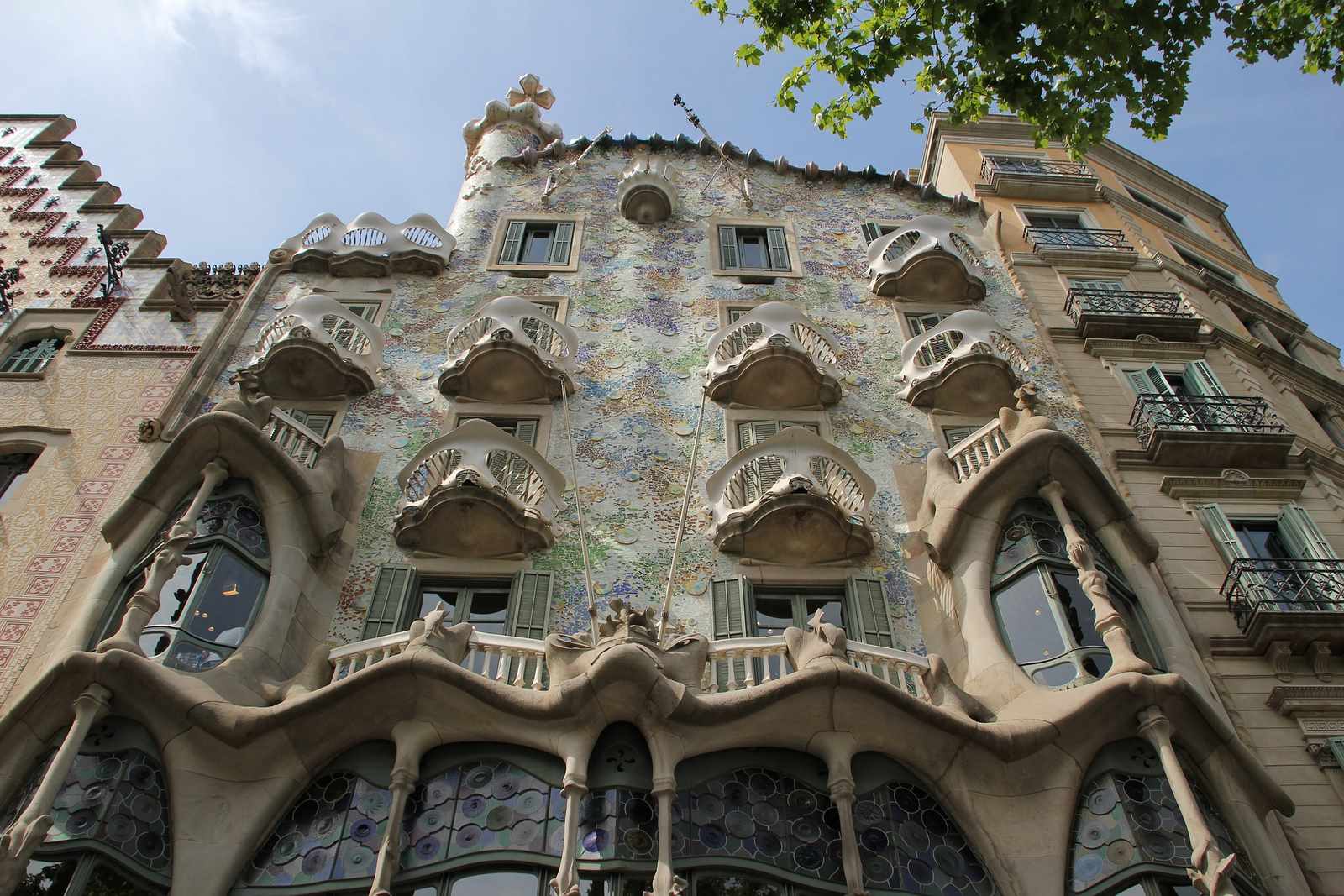 Another masterwork by Antoni Gaudi is an apartment building located in the center of Barcelona which was remodeled to a uniquely different design in 1877: Casa Batlló. Gaudi used modernism architectural design which included stone, ceramics and forged iron for its construction and remodeling. Visitors can witness bone-like columns, in front of the oval windows and well-sculpted stonework on the first floor of the building.

Casa Batlló is opened throughout the year for visitors.

More recently, Agbar tower is among the buildings which help define Barcelona’s skyline. A French architect, Jean Nouvel, designed it for the city’s main water corporation. One of the salient features of this tower is its nighttime illumination system, which engages around 4,500 LED lighting devices capable of producing approximately a wide range of different colors across the building surface.

It is also one of the popular gatherings on New Year’s Eve for locals and tourists as a unique lighting show takes place there.

MACBA – aka. Museu d’Art Contemporani de Barcelona (Barcelona Museum of Contemporary Art) – is a museum that focusses on contemporary art, declared as cultural heritage by the Govt of Catalonia. It was built between 1991 and 1995 and houses a huge contemporary art collection comprised of thousands of works. Minimalist art fans should put it on their itinerary.

It is advised to visit MACBA during the period of September to June.

The Forum Building, designed and built by Swiss architects Jacques Herzog and Pierre de Meuron, has a museum and an auditorium with a library and a children’s science area. However, the various art exhibitions happening throughout the year there are without doubts, its major attraction.

Founded in 1326 by King James II of Argon, Pedralbes is a Gothic Monastery that houses a museum and a space for hosting both permanent and temporary exhibitions.

Located near Barcelona’s cathedral church, Santa Caterina market is a must-visit for both architecture fans and foodies. The market exists since 1845 and it was renovated in 2005, to give its famous roofing a fine touch with an impressive mosaic roof on the top. It derives its name from the Convent of Santa Caterina, where the market occupied its largest space. Today it houses traditional food stalls and small restaurants with a mix of delicious dishes.

The market is opened from early morning Monday to Saturday throughout the year.

The Santa Maria del Mar church, built between 1329 and 1383, is yet another outstanding example of Catalan Gothic. With a very unusual style of building, touching unity and purity in medieval history, it is situated in Barcelona’s Ribera district. The construction of this church, unlike the cathedral, was funded by local people. The simple design and lack of any decoration give the church an atmosphere of unmatched calmness.

Guided tours on the rooftop of the church are available to visit from May to October. 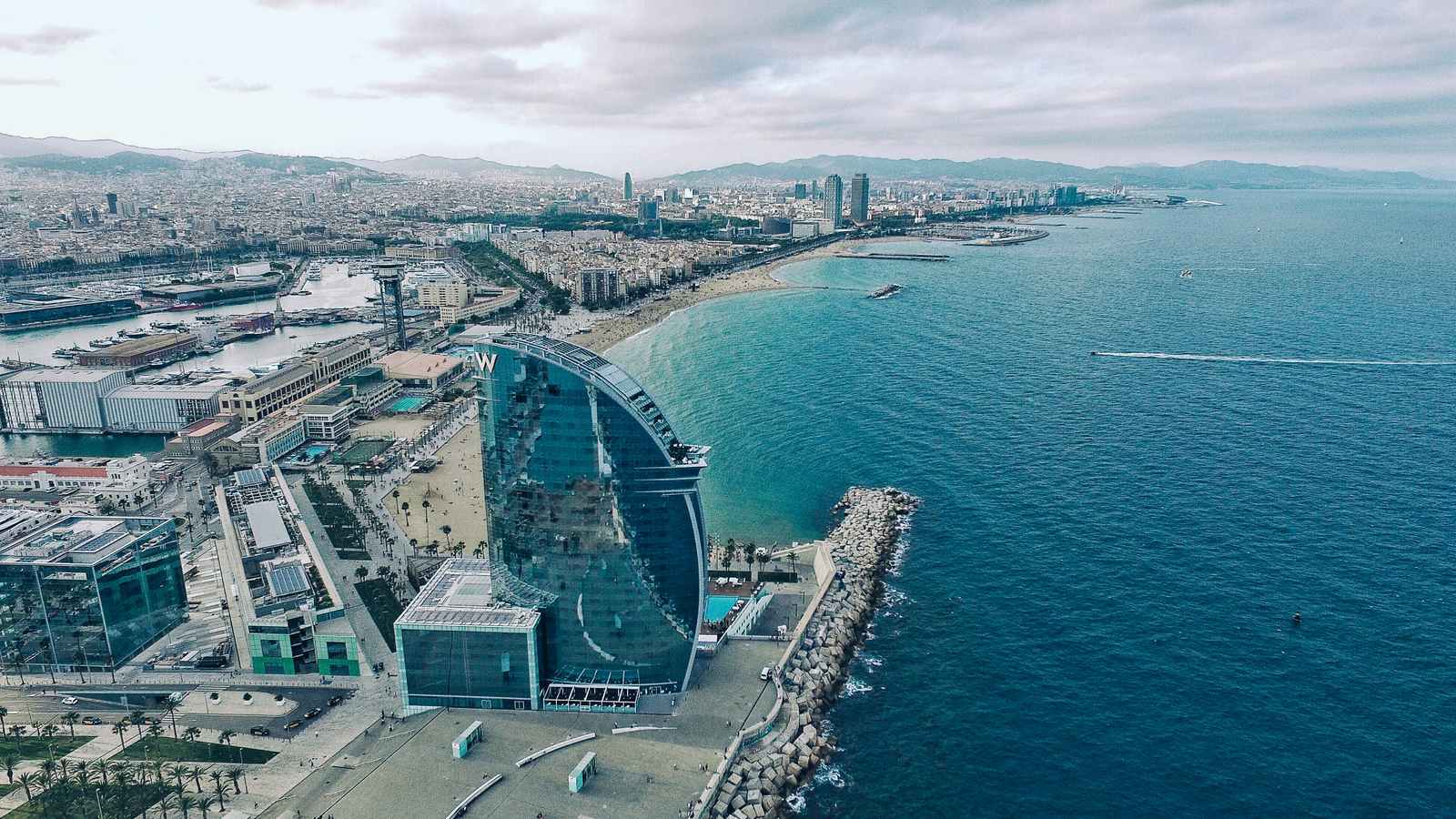 W Barcelona Hotel, famously known as Sail Hotel (hotel vela in Spanish), was designed by Ricardo Bofill. Located in the Port of Barcelona, the hotel is marketed by W Hotel and managed by Starwood Hotels and Resorts.

Luxurious facilities like a rooftop bar, a spa, indoor as well as outdoor pools, beach restaurant to attract tourists looking for a relaxing stay with a sea breeze at the front end of the premises and more await visitors in this building, that undoubtedly, resembles the iconic Burj Al Arab of Dubai.

Situated in a prime location of Passeig de Gràcia near the city’s main cultural and entertainment venues, this hotel was designed by a team of Spanish architects and designers: Carlos Ferrater, Joan Trias de Bes, and Patricia Urquiola. It was recognized as the Best Hotel of the City in 2011.

Keep reading: Check This Perfect Itinerary For 2 Days In Barcelona

Barcelona Auditorium and Music Center structure was built between 1905 and 1908 by Lluis Domenech i Montaner for the choral society in a typical Catalan modernist architectural style. The main attraction of the Auditorium is the Concert Hall, considered to be the most beautiful hall in the world. It was described as mystical yet so paradoxical, simple yet so complex.

The center was declared a UNESCO World Heritage site in 1997 and hosts various musical performances from Canco to musical Jazz and symphony attracting half a million people every year. 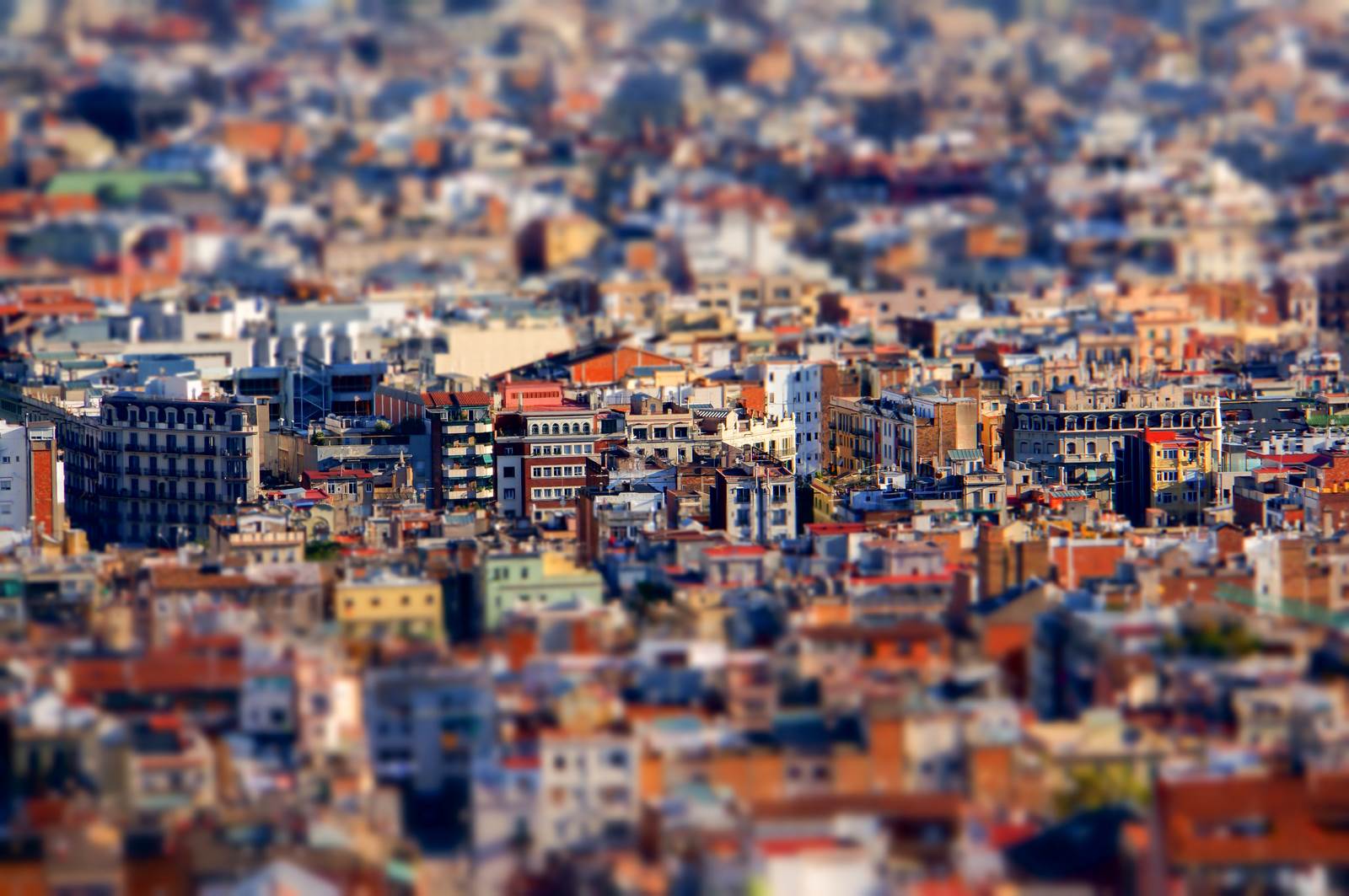 The architectural marvels of Barcelona can make you dive deeper into the rich culture and traditions Spain is known for. Enjoy!

If you liked this article, here’re other city guides you will enjoy too: