Paris is known as a city of romance. And if you’re an architecture lover, you’re sure to fall head over heels in this beautiful city. From the classic Gothic design of Notre Dame to the ultra-modern lines of the Philharmonie, this guide to photographing Paris will take you on a tour of the city’s most stunning structures. 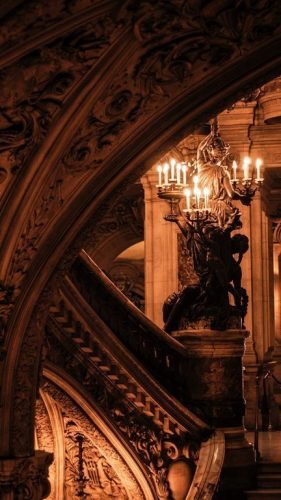 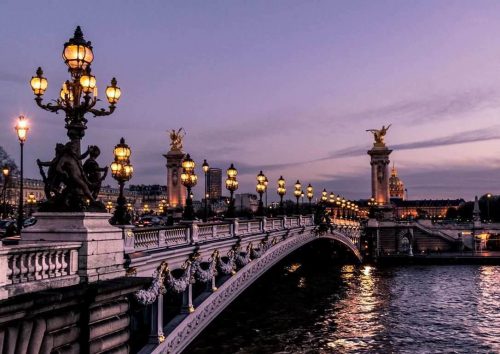 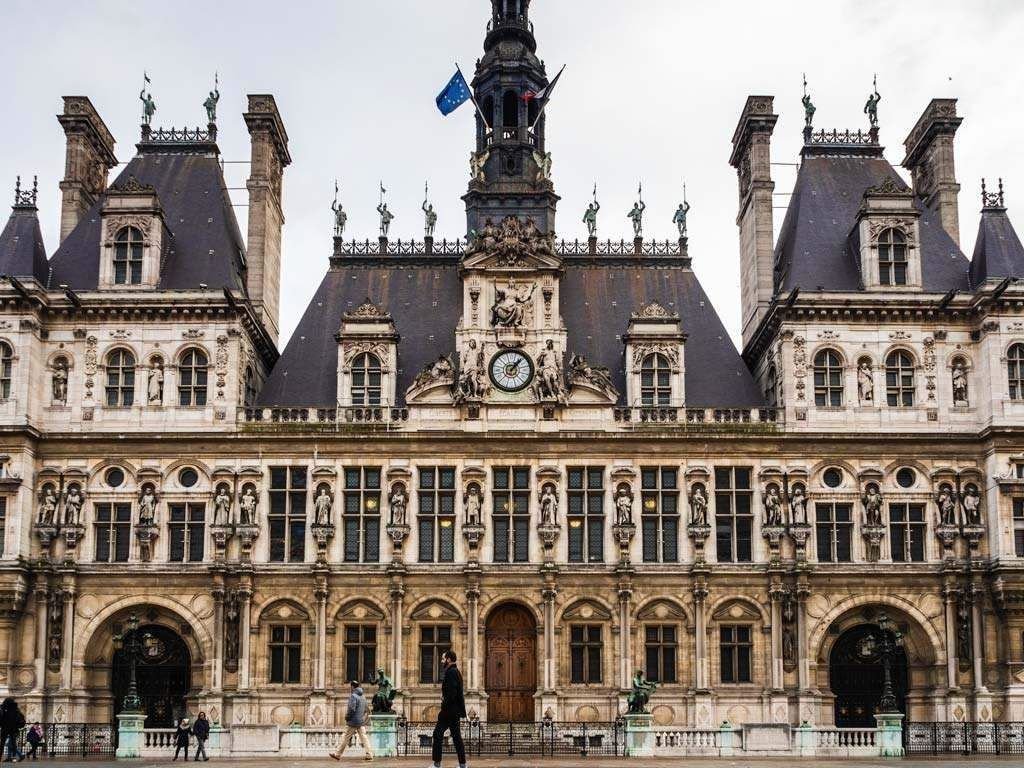 Located just south of the popular Le Marais neighborhood, the Hôtel de Ville serves as Paris’ city hall. The original building was used as the headquarters of the French Revolution and burnt down in 1871. 20 years later, it was rebuilt in the style of French Renaissance Revival architecture. The white facade is laden with statues, columns, and windows, making it an opulent subject for photos. For extra foreground interest, you could even include the ornate lamp posts or vintage carousel stationed outside the main entrance. 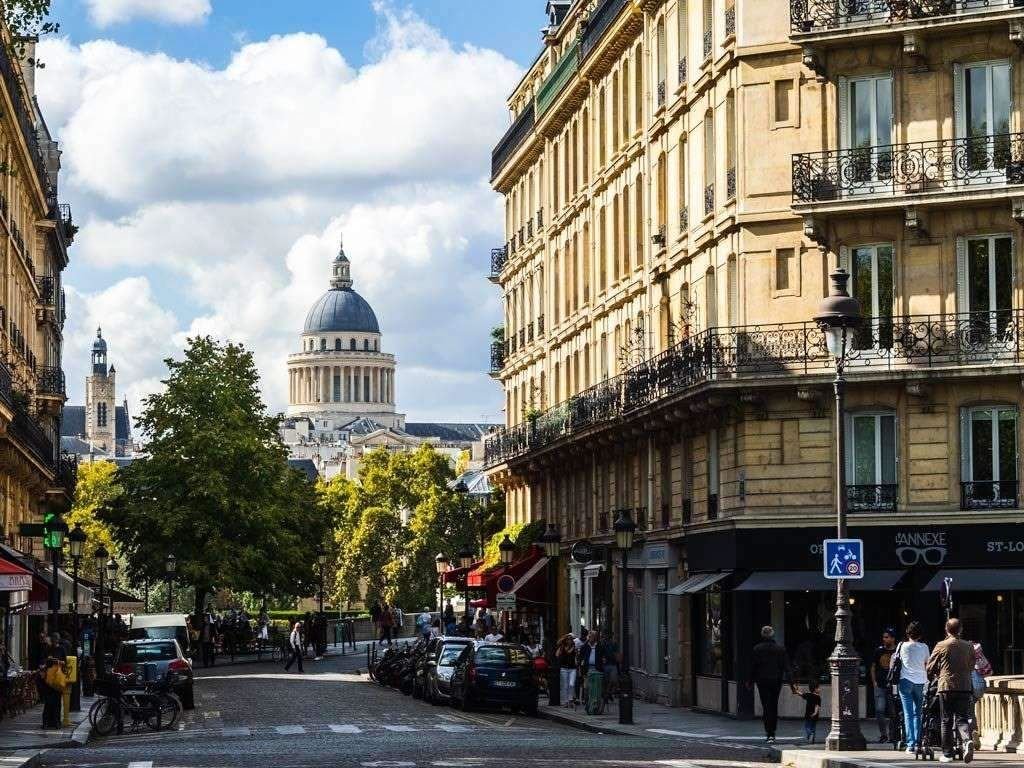 Looking at the Panthéon, you might think you’ve been transported to Rome. This Neoclassical building started out as a church devoted to St. Genevieve, but today serves as a mausoleum of important French figures. Two dozen Corinthian columns support a frieze depicting French patriots. Best of all, the Panthéon’s hilltop location means its iconic triple dome can be seen from across the city. 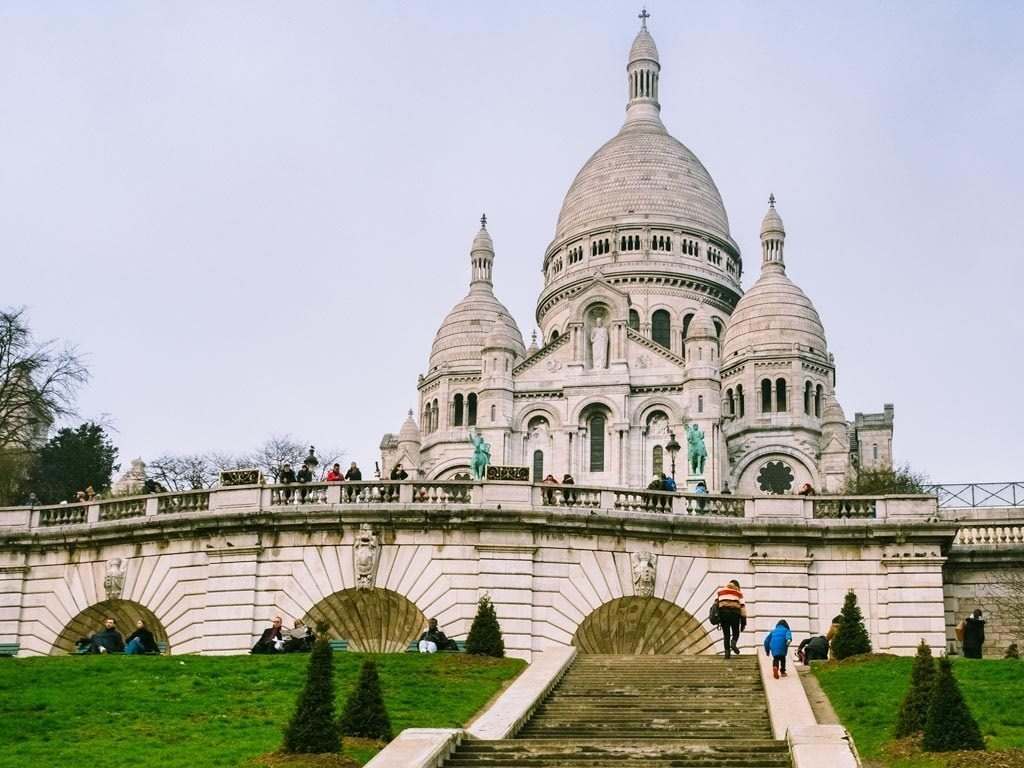 Situated at the highest point in Paris, Sacré-Coeur Basilica is one of the city’s most popular monuments. Its Romano-Byzantine design and white travertine stone make it stand out from the crowd. Though photography isn’t allowed inside the basilica, going in to see the stained glass and mosaics is a must.

Approaching Sacré-Coeur from the south yields views of the green lawn and dual sets of stairs, while a western approach offers views from the charming alleys of Montmartre. The basilica’s main dome is free to visit and provides incredible panoramic views over Paris. 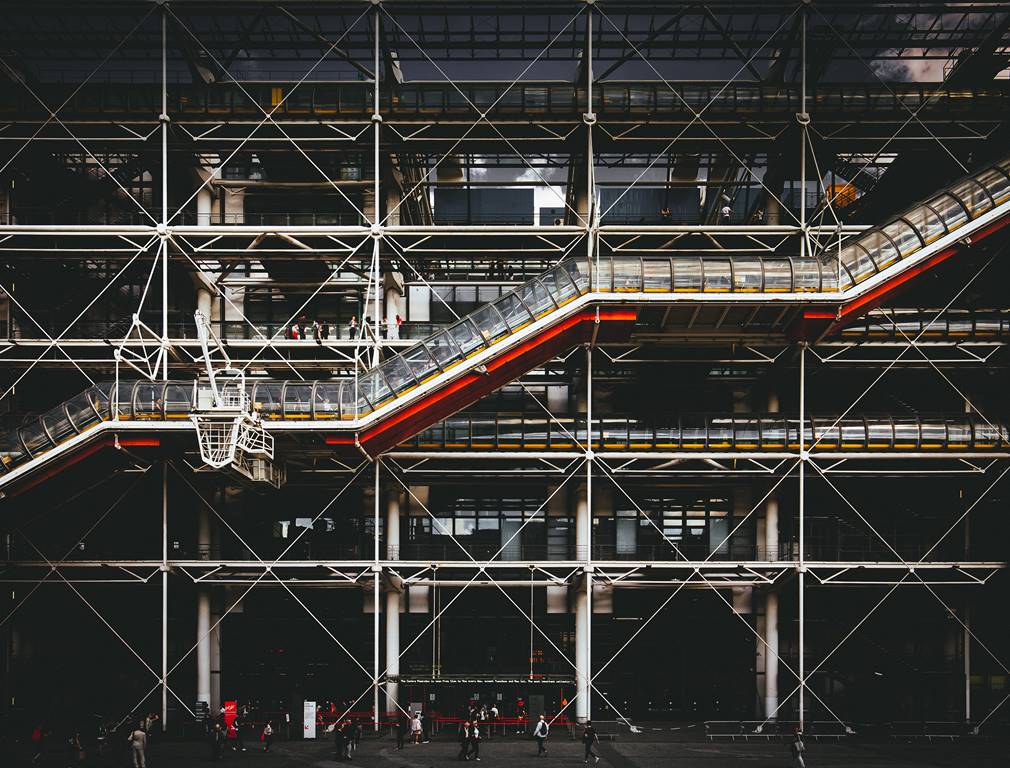 Perhaps the most unique building in all of France, the Centre Pompidou serves as an important cultural and architectural center in Europe. Glass tubes, multi-colored pipes, and exposed steel frames form the futuristic facade, and the surprisingly open interior is free of load-bearing structures. The entire building feels even more avant-garde due to its proximity to the Marais’ classic Parisian flats and cafes. When taking photos, be sure to fully walk around the Centre Pompidou, from the western piazza to the eastern view from Rue Beaubourg. 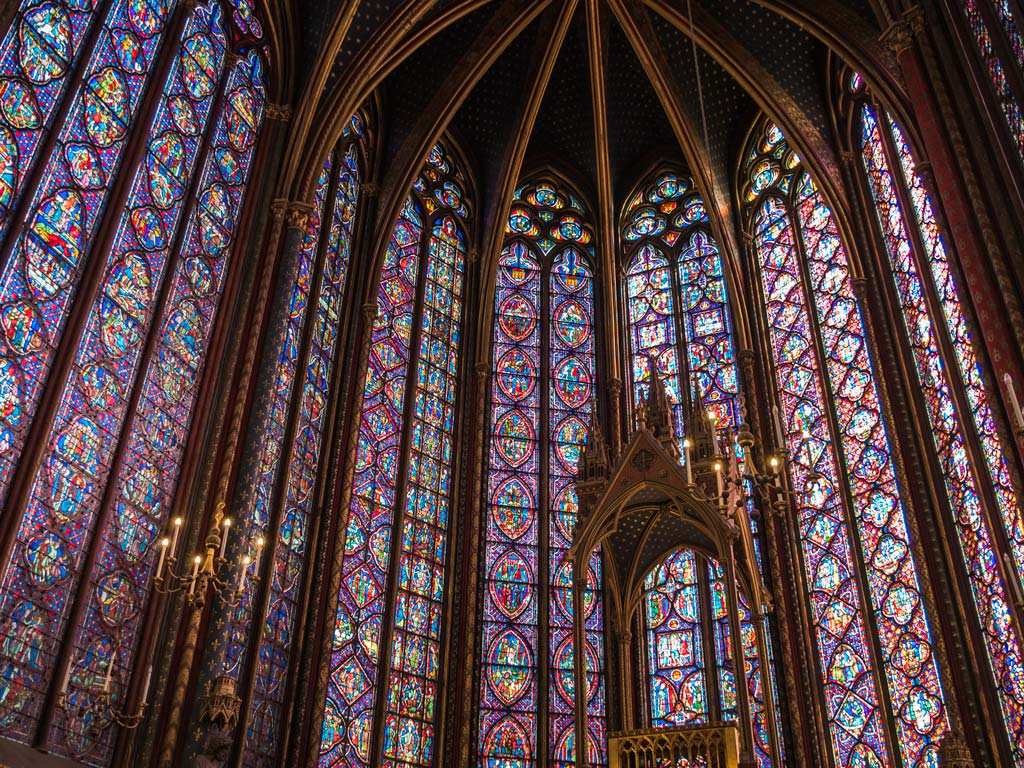 You don’t need a degree in architecture to appreciate the beauty of Sainte-Chapelle. This two-story, 13th-century Rayonnant Gothic cathedral houses one of the world’s most spectacular collections of stained glass. While the lower chapel feels rather dark and closed-in, the second floor’s vaulted ceilings, elaborate windows, and starry ceiling are heavenly. You’ll need a wide-angle lens with a low F-stop to capture the interior (no tripods allowed), though it’s possible to take photos from the outdoor balcony if you need more light. 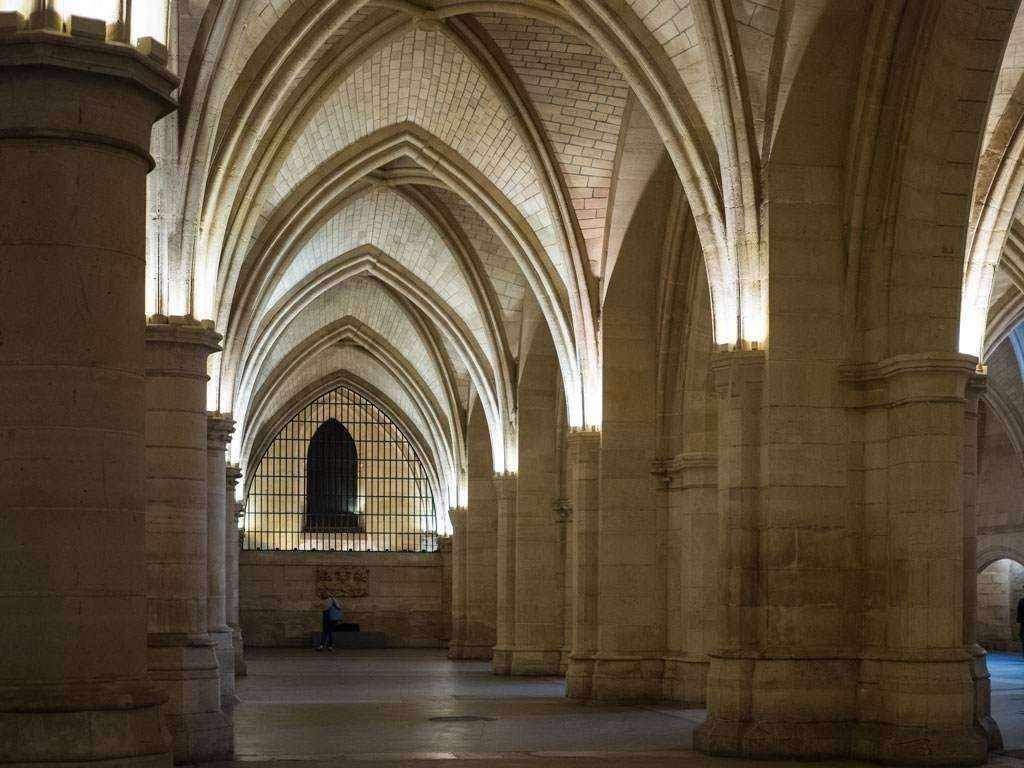 Once the medieval palace of French kings, the Conciergerie is best known as the French Revolutionary prison that held Marie-Antoinette. From the outside, it looks like a fairy tale castle stretching along the banks of the Seine. While the interior’s jail cells and courtyard are interesting, it’s the underground Hall of the Guards that’s most striking. The rows of vaulted arches seem to go on forever, and the sconce lights create lovely highlights and shadows. Like Sainte-Chapelle, tripods are not allowed inside, so bring a lens with a low F-stop. 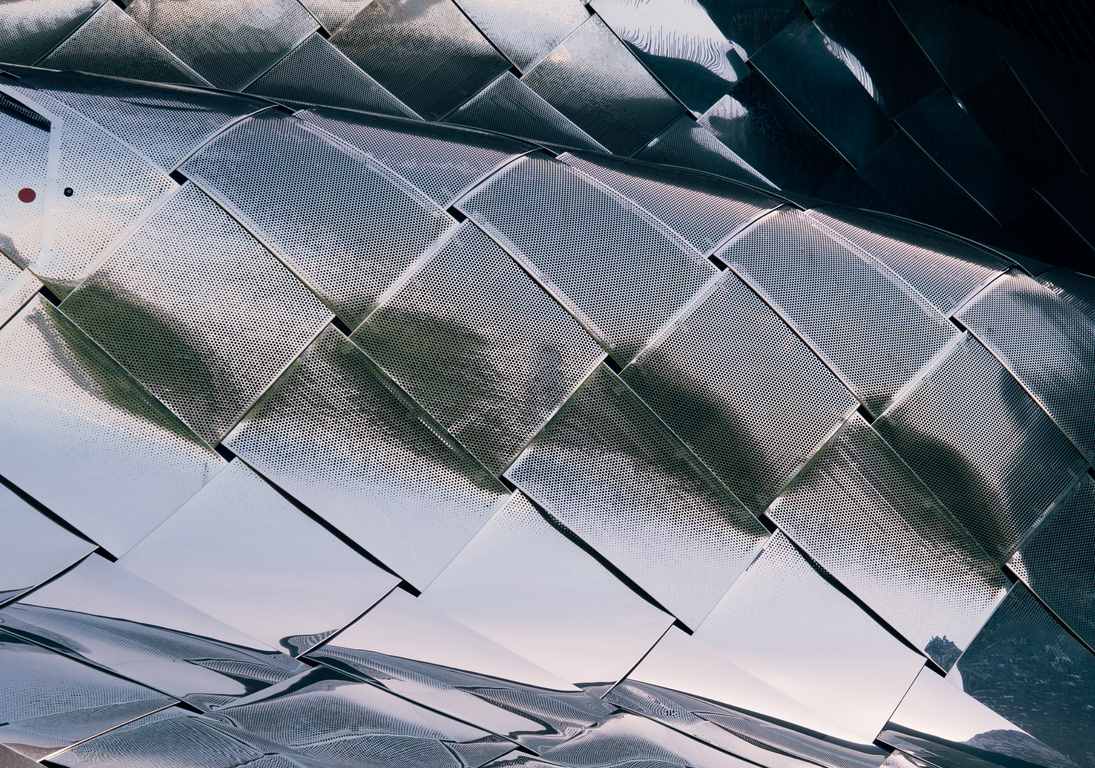 Rising from the green hills of Parc de la Villette, the Philharmonie de Paris is one of the city’s newest structures. The modern facade features several animal motifs, including over 300,000 etched birds and a series of scale-like, aluminum panels. Because of its shiny exterior, the Philharmonie de Paris is best photographed on a cloudy day or during blue/golden hour. 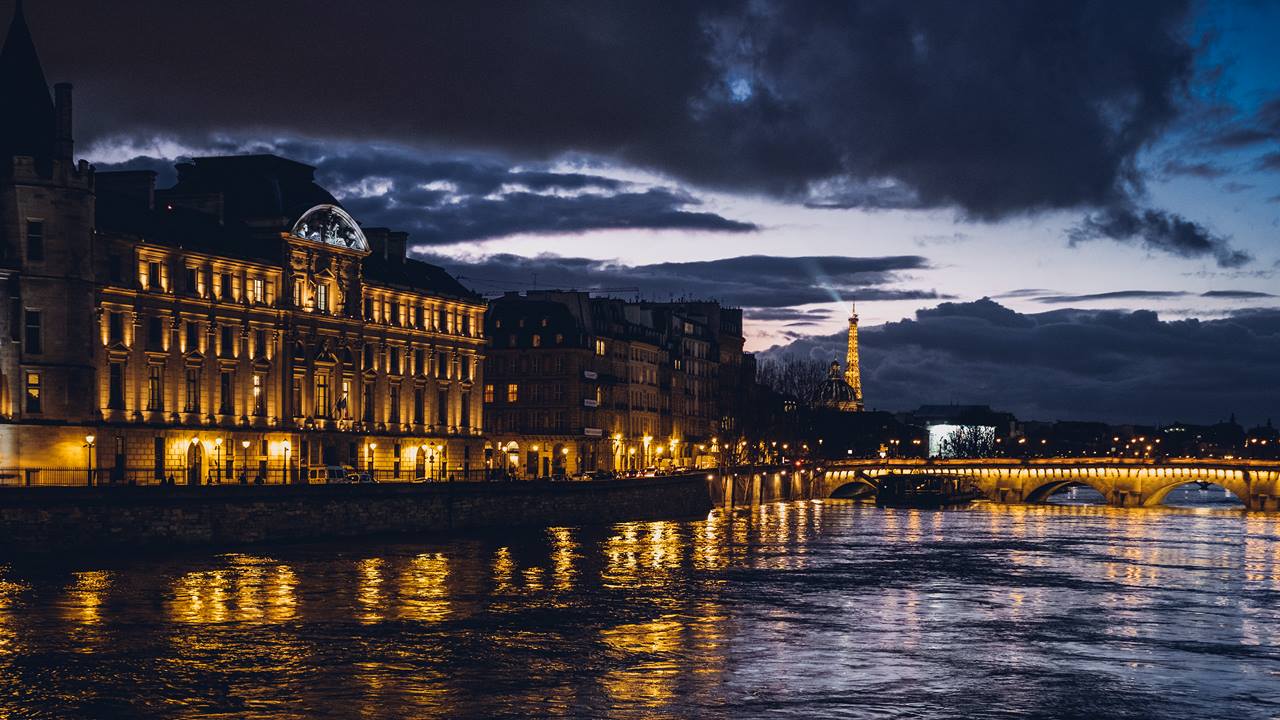 Constructed in the late 1500s, Pont Neuf is the oldest Parisian bridge spanning the river Seine. Its iconic stone arches connect the left and right banks of the  Île de la Cité to the rest of the city. The sides of Pont Neuf sport unique stone masks called mascarons, though the ones you see today are 19th-century replacement copies of the 16th-century originals.

It is very easy to get an image of the river Seine and its bridges with the silky water if you take a long exposure. You just need a tripod. K&F Concept has a few great ones to choose from. 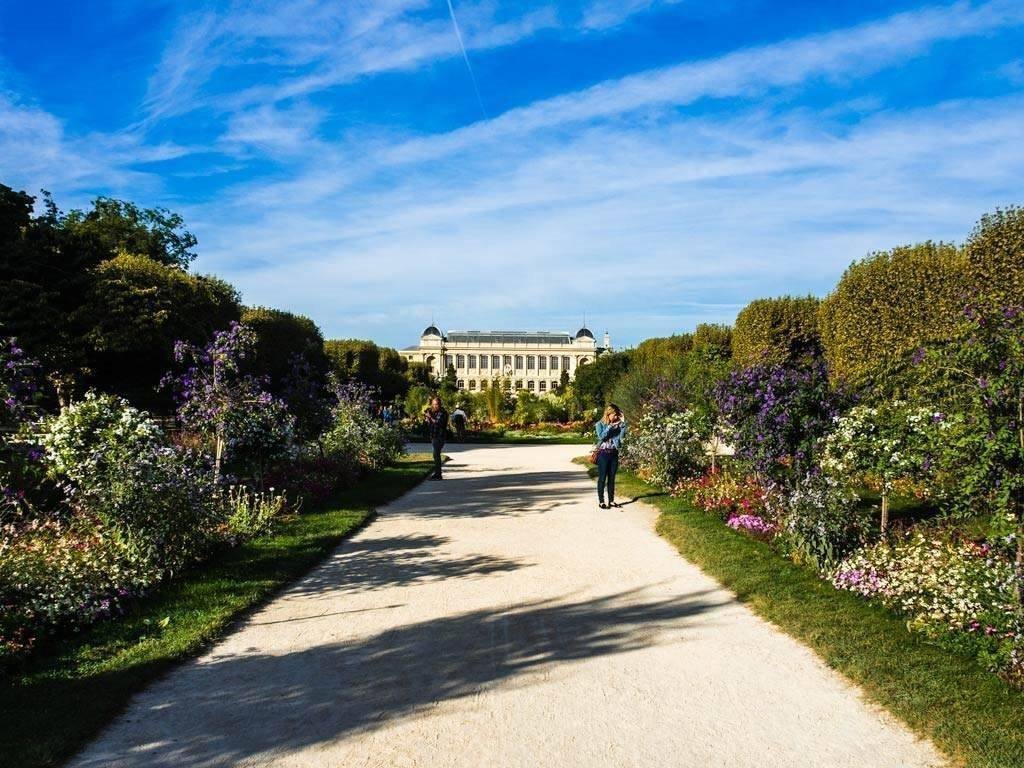 Formerly the royal garden of King Louis XIII, the Jardin des Plants is now a sprawling public botanical garden with several galleries. Thousands of vibrant plants line the walkway to the grand Gallery of Evolution, which boasts a massive glass ceiling. The complex also has multiple greenhouses, both old and recently constructed. If you can’t make it to the Palace of Versailles, the Jardin des Plantes will give you a similar regal feeling. 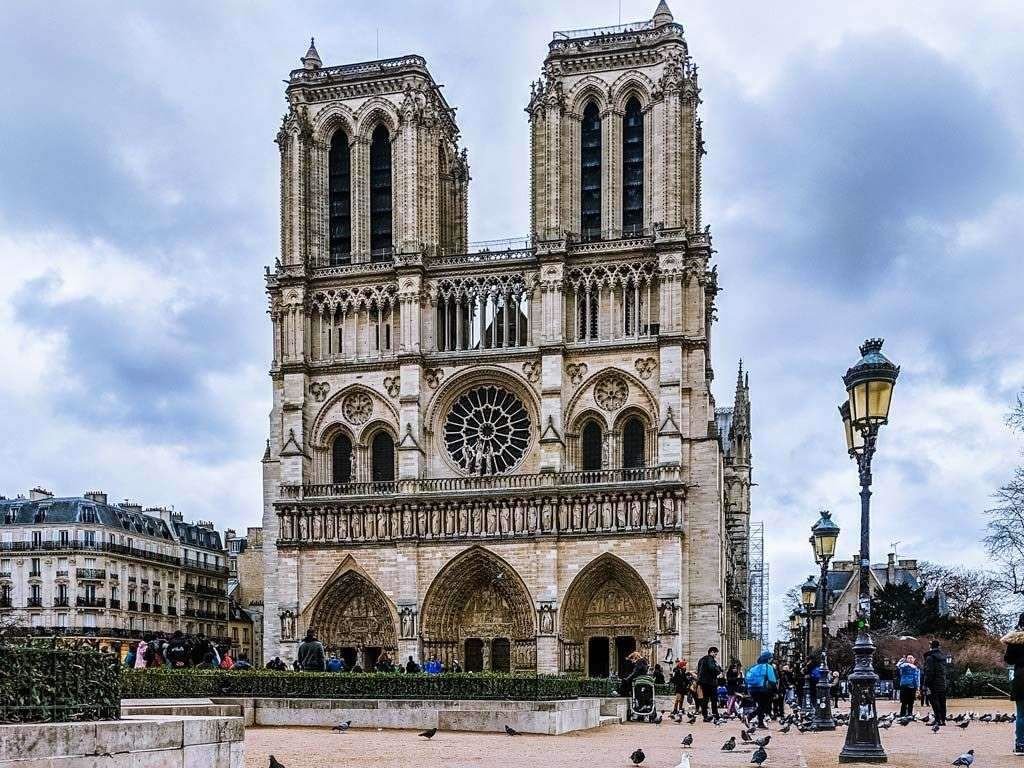 From gargoyles to flying buttresses, Notre Dame is the epitome of the French Gothic style. The large open courtyard makes photographing the front easy, though you should walk around the sides for views of the ornate apses. Admission is free, but lines can be very long during peak season. Photography is permitted inside Notre Dame (no tripods), so bring your low F-stop lens to capture the iconic stained glass rose windows. 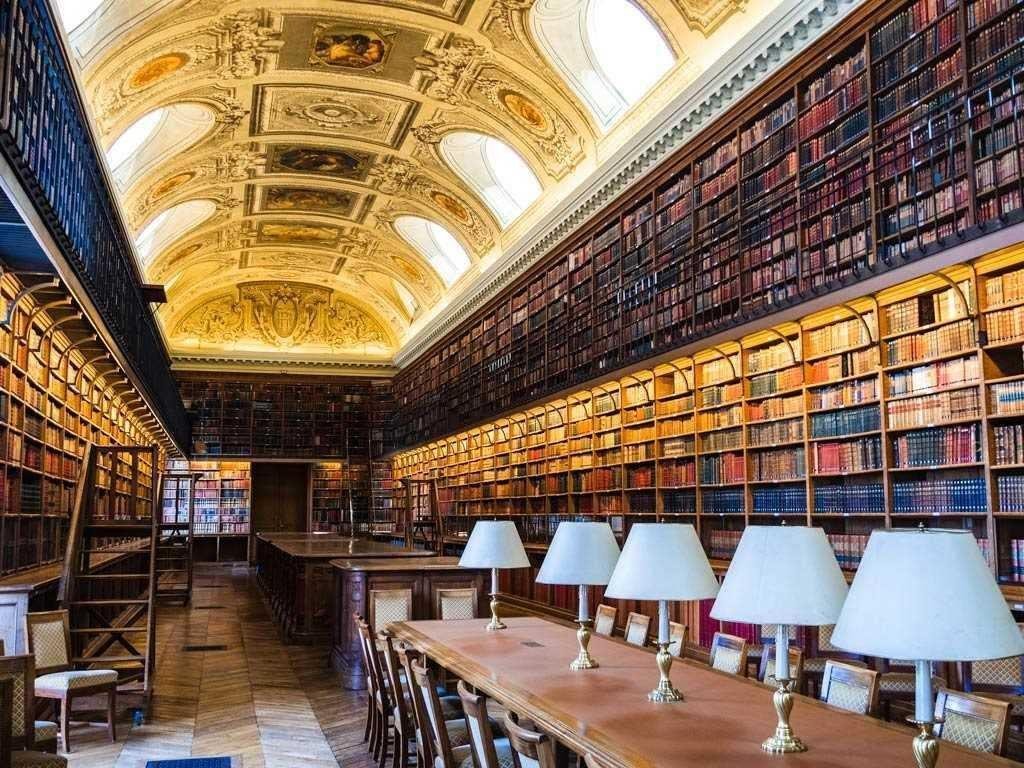 Commissioned by Marie de Médicis in the 1600s, Luxembourg Palace is an interesting blend of French and Italian architecture. The palace opens onto the elaborate Luxembourg Gardens, where children sail antique toy boats in the large water pools. Currently, the palace serves as the seat of the French Senate and is only open to the public once per year during European Heritage weekend. However, the building’s gorgeous interior, which includes a jaw-dropping library, is reason enough to plan your visit around this weekend. 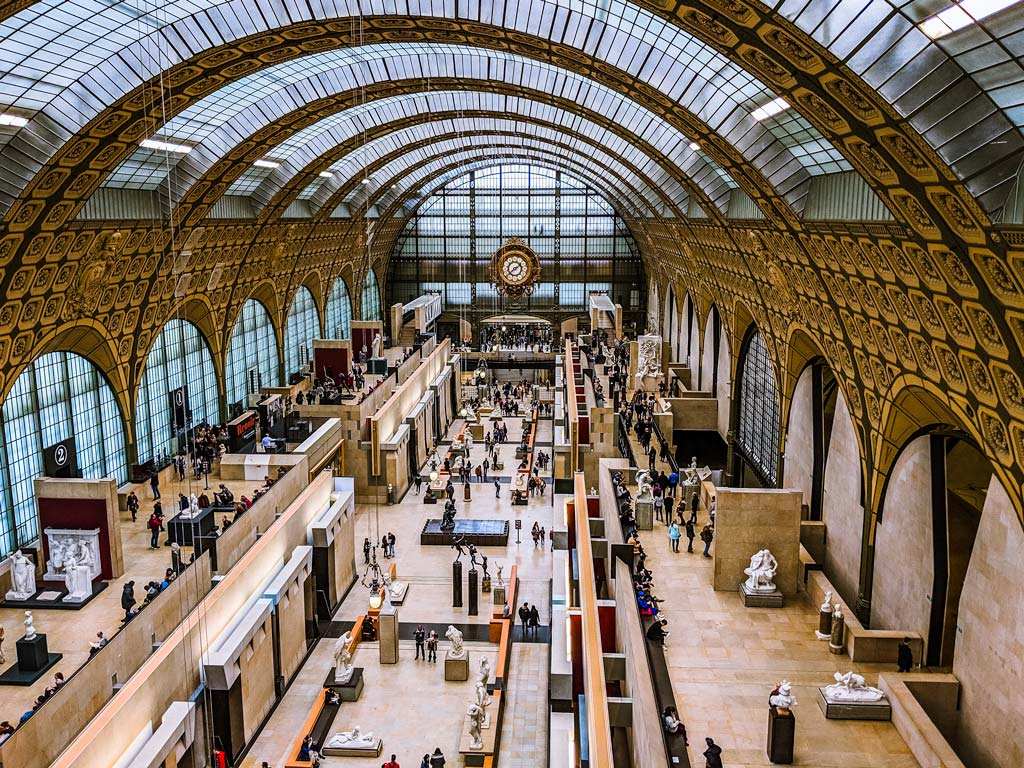 The Musee d’Orsay began life as a Beaux-Arts train station, which explains the large clock face on the facade. In the late 1980s, it was converted into one of Paris’ most popular art museums. Inside, the curved ceilings and half-dome windows further point to the museum’s rail station roots. If you head to the back of the 5th floor, you can photograph the famous clock face, where the view stretches all the way to Sacré-Coeur. 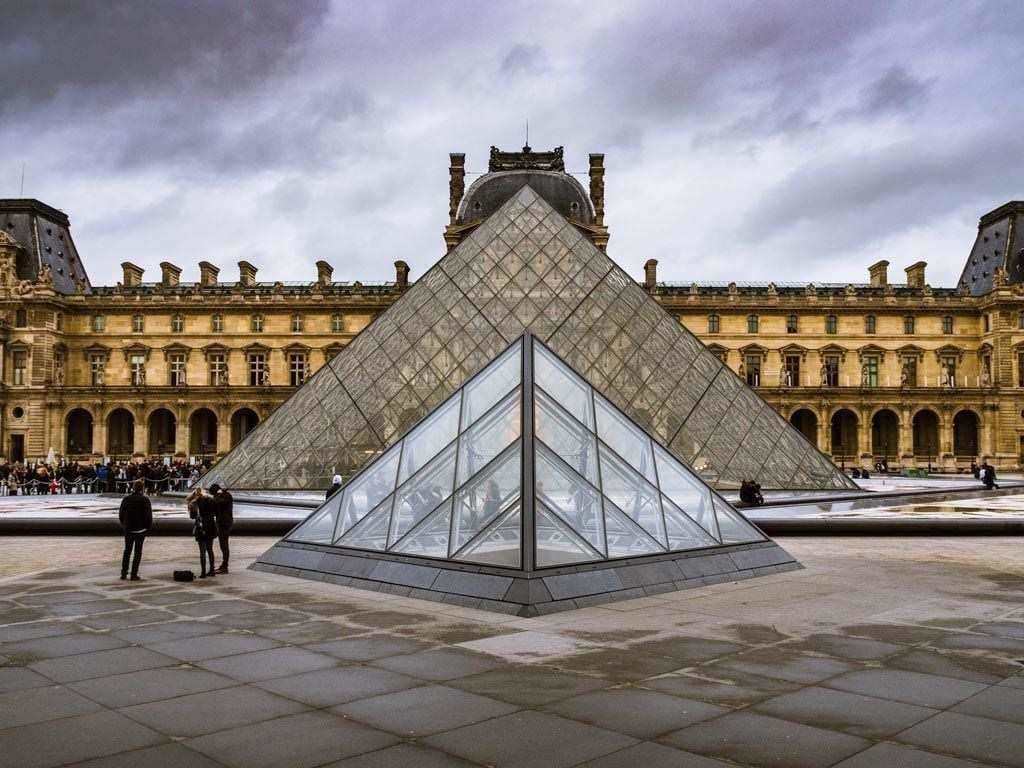 Few places blend classic and modern architecture as well as the Louvre and its Pyramid. Built in 1989, the steel and glass construction serves as the museum’s primary entrance. Because of this function, photographing the Pyramid can be challenging. It’s best to arrive early in the morning or close to sunset on a weekday for clean shots. And if you decide to go inside the Louvre, be sure to walk under the pyramid’s base for a unique upward view. 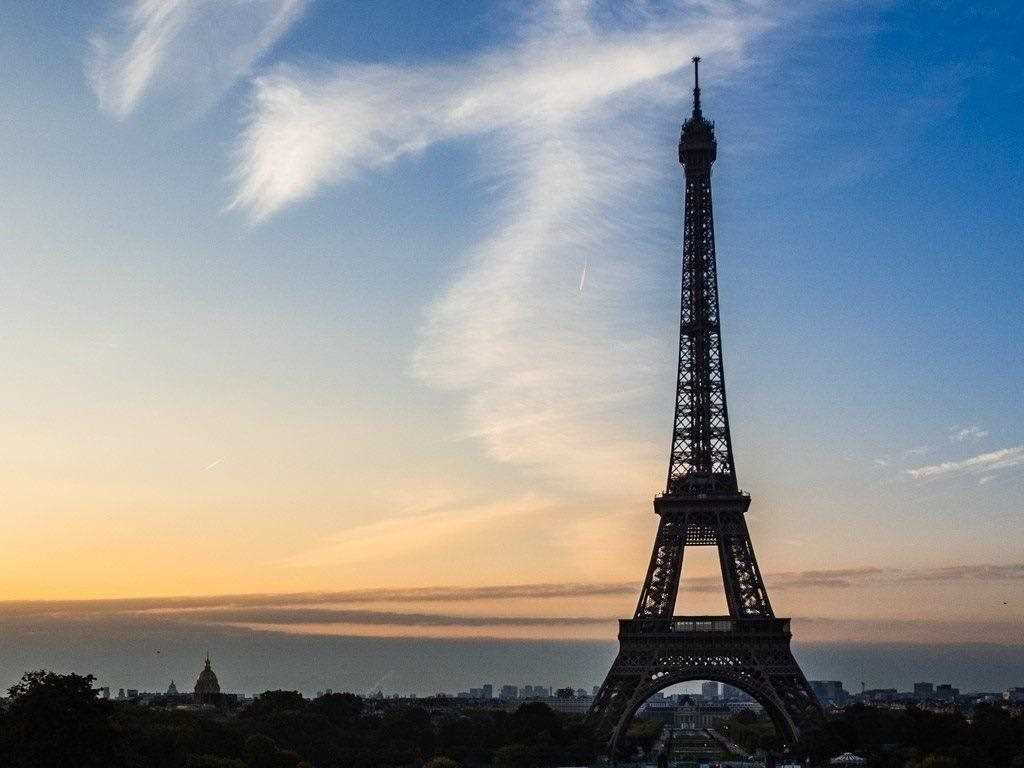 No Paris itinerary is complete without a visit to the Eiffel Tower. Once considered an eyesore left over from the 1889 World’s Fair, it’s now one of the planet’s most recognized monuments. There are dozens of places and angles for photographing the Eiffel Tower, with the view from the Champs de Mars being the most famous. From here, it’s possible to get close-ups of the steel structure. Other good photo spots include the Trocadero, Pont Alexandre III, and Théâtre de la Tour Eiffel. 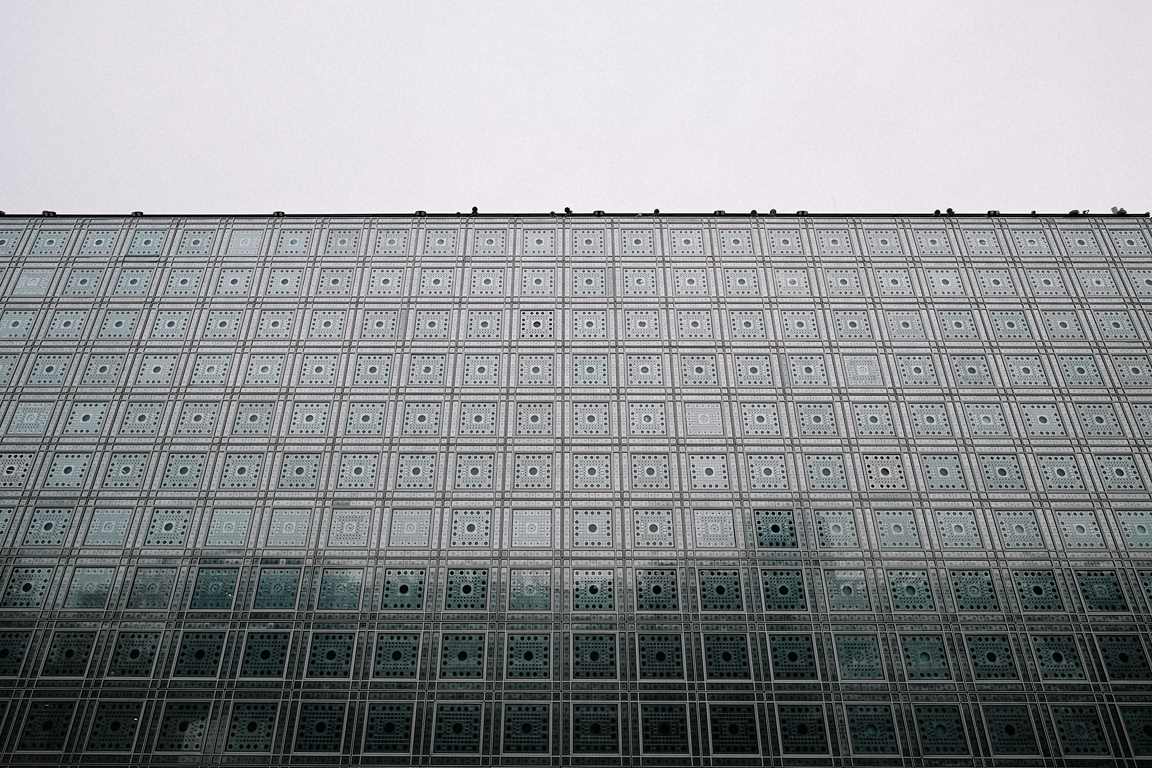 Blending Western and Arabic architecture, the Arab World Institute is a multicultural marvel in Paris’ Latin Quarter. This award-winning building is full of contrasts, with a river-facing facade that curves along the Seine, and a massive, shining wall of Arabic mashrabiyas on the opposite side. These traditional patterns can change throughout the day, as their inner circles open and close based on the sunlight.

The Millennium Park complex marks a new wave of modern, sustainable development in Paris. The area’s commercial, industrial, and residential spaces form their own mini-community within the Aubervilliers suburb. For a waterfront view of angular buildings 2-4 (and a possible reflection shot), head to the Allée Guy Debord.

Fondation Cartier is more green space than building. Nouvel’s creation looks like a place that was long abandoned and taken over by nature. Trees rise up and touch the walls, and a large garden offers walking trails dotted with flowers. Once a month, the building opens for architectural tours for groups of 10 or more.

Science-savvy photographers can figure out the purpose of Fondation Imagine without any help from the internet. The genetic research center’s glass facade is covered in red, white, and blue etchings of the human genome. Completed in 2014, the modern construction and geometric angles are a sharp contrast to the typical Parisian buildings of Montparnasse.

Just around the block from Fondation Imagine sits the Novancia Business School’s latest addition. This corner building brings a pop of red, orange, and yellow to the Necker neighborhood. Because of the glazed exterior, you’ll want to avoid harsh sunlight when photographing the school.

For an updated take on Parisian bridges, head to the Simone de Beauvoir Footbridge. It opened to pedestrians and cyclists in 2006 and connects the 12th and 13th arrondissements. To capture the unique steel curves, stand on the nearby Pont de Bercy or Pont de Tolbiac.

Composed of three distinct structures, Tour Horizons is both urban and whimsical. With a squat concrete base, geometric middle, and greenhouse-looking top, this office building is an unmistakable part of the Boulogne-Billancourt skyline.

When the Tribunal de Paris opened in 2018, it became Europe’s largest court complex. This four-tiered structure resembles a staircase as it rises from the streets of Paris’ 17th arrondissement. Each layer has a rooftop garden, which adds a pop of green against the glass and sky.

In case those views make you fall in love with the city and you don’t feel like leaving, there is a wide selection of mid- to long-term accommodation options available in Paris for you to pick from.

If you liked this article, here’re other city guides you will enjoy too:

Chelsea is a US expat living in London. She shares detailed guides for international travel and expat life on her blog, The Portable Wife. Follow her global adventures on social media.