The author recounts landing for the first time on the fabled Antarctic peninsula and considers the precarious future of a frozen continent on a rapidly warming planet.

Whether it was the recent centenary of Amundsen and Scott’s race to the South Pole or the bequeathal of a large tract of disputed Antarctic territory to Britain’s monarch; the race to find new extremaphile life forms or Japanese whaling ships and activists locking horns in the Southern Seas – barely a day goes by without the Antarctic region hitting the headlines.

A remote frozen tract at the periphery of the planet, I dreamt of going to this land of sea monsters and legendary exploration for as long as I could remember. And it so happened that time, finances and fate were on my side in November 2012 when my opportunity came to embark on a quest to explore the ‘Great White Continent.’

On 1st December 2012 (Antarctica Day serendipity would have it) as our expedition ship sailed through floating sea ice, we caught a glimpse of Elephant Island, the site of Point Wild, a spit of terra firma which became the godforsaken refuge of 28 of Ernest Shackleton’s crew in 1916 following the disintegration of their ship, the ironically monikered ‘Endurance’. 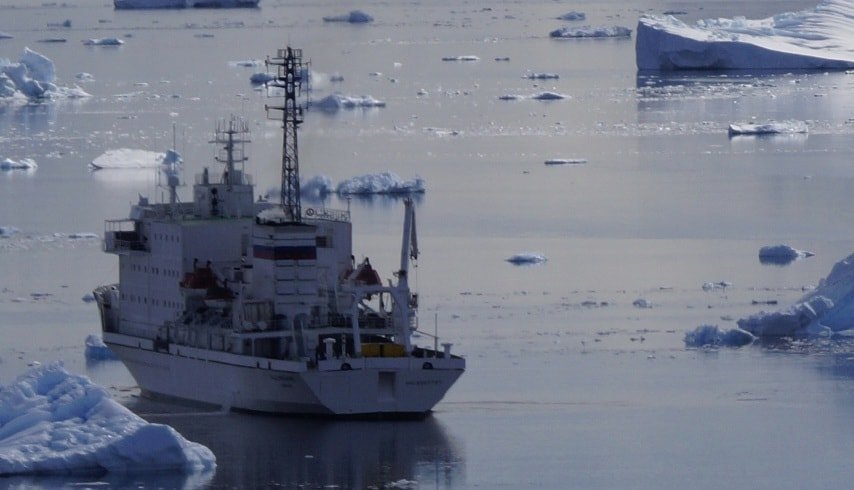 Three days later we came upon our ultimate prize, the final destination of our expedition, the fabled Antarctic peninsula, a continent that had evaded man’s grasp for millennia but that the Greeks had postulated existed over 2000 years ago. It’s less than 200 years since the first man set foot here and I was to follow in the footsteps of a relative few who had sought passage in this enigmatic land, whose resolute odysseys had led them to glory and fame, hardship and defeat, wealth and butchery. Like all those that had stepped on this continent before me, it was a cardinal landmark in my life.

The ship anchored in the calm waters of Charlotte Bay and the passengers were meted out onto zodiacs that waited on the placid water. As we glided over the patina of the strait mighty icebergs rose up into the lofty blue sky, blanched white and pure, levitating on sapphire, echoed in perfect symmetry on the water’s surface. The only sound, a delicious barrage of melting bergy bits, a salvo of pops and fizzles. The only movement the unfurling eddies and rippling cubist reflections produced from our floating zodiac. For an hour, we weaved through this otherworldly sphere of alabaster turrets and moonstone spires in suspense, along crystal lanes and aquamarine boulevards, beneath silvery temples, past the gaze of giant ice Sphinx.

But then with a lurch of the engine the pace picked up, we propelled through the water and within moments arrived at Portal Point, 64°30’S, 61°46’W, an expanse of nimbus hills, troughs and ridges. At last we were to sink our first footprints into Antarctica in an enclave named the Reclus Peninsula. Our visit all the more poignant given the late explorer Sir Wally Herbert’ daughter Kari, was here to make a pilgrimage to one of her father’s favoured vantage points.

A titbit of wildlife was spotted on some jutting rocks set amongst this vast sweep of ice – a gentoo penguin, a couple of shags and a handful of gulls. Then a throng of humans, a welcoming party of guides that helped us out of the tame surf onto the pebbly shore. 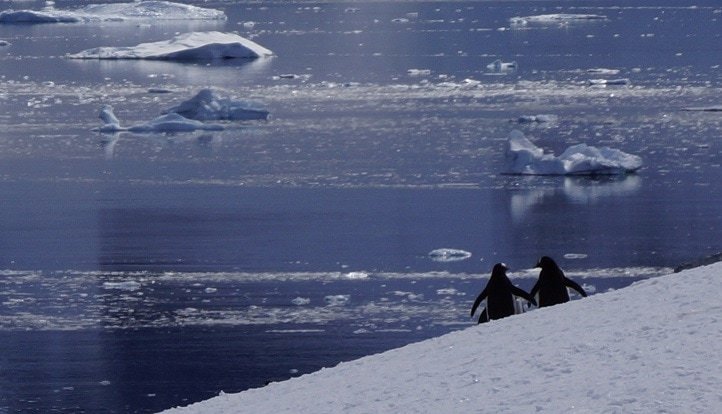 A carnival of surreal ice sculptures

From here we waddled like penguins in our downy all-weather gear, along snow channels that had been marked out for us by the ship’s crew. We mounted a snow bluff and found ourselves in a gently rolling incline that opened out into the spectacular Charlotte Bay. We took in the view; the sun sighed from an azure sky and cast her lustre over a carnival of surreal ice sculptures and crisp white mirror images on an indigo lagoon. Fellow passengers whooped with joy at having made the milestone, glowing faces and beaming smiles were caught on cameras. Snapshots under bursting splinters of sun, our shadows long, a single spectral cloud soared overhead. “We’ve made it!”, “Congratulations!” “We’re here, the frozen continent at last!” An incongruous kafuffle against the composed and dreamy landscape.

My husband and I made our way to another snowy ridge. On our own, we could breathe in the silence, taste the pure sharp air, hold hands; and root ourselves to the humbling moment, the sensation of ancient snow and glacier beneath our feet. My eyes wandered gently over the spectacular body of glittery water, the amphitheatre of ice that spread out before us; and the duck egg blue skies draped with delicate cloudy gauze.

The only motion that punctuated this serene landscape was the occasional gull wheeling overhead, now and again piercing the silence with a melancholy wail, the beat of its wings, muted in the white. It is said that gulls and albatross carry the souls of mariners that wander this frozen paradise for eternity. What change they must have witnessed in recent years. 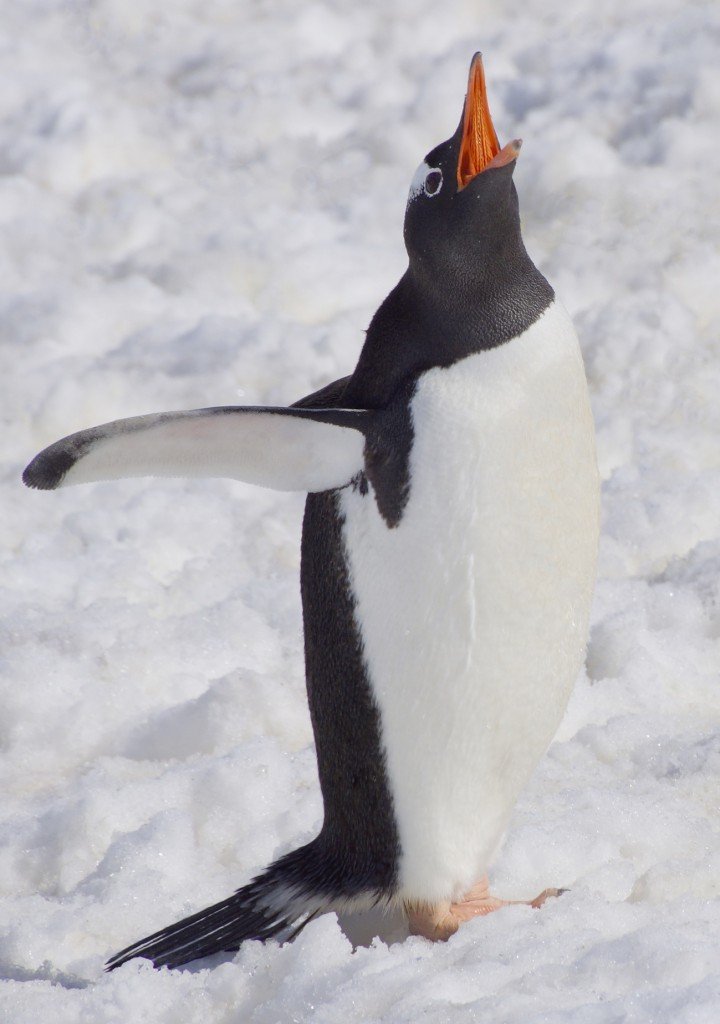 According John Harrison, historian and author of Forgotten Footprints, the first known landing on the Antarctic continent was on 7th February 1821 by crew members of an American sealing vessel captained by John Davis. But in this short period the world has changed so rapidly even the intractable seventh continent cannot hold firm much longer.

The Antarctic landmass extends over 14 million km² and roughly doubles in size every winter as sea ice around it freezes. It’s surrounded by nutrient rich waters, a sanctuary for phytoplankton, krill and fish; a marine cornucopia that feeds large populations of magnificent whales, seals, penguins and albatross. 50% of the species in the region are endemic.

But according to the National Snow and Ice Data Center, in the last thirty years, scientists have observed a series of unusual Antarctic ice shelf collapses. In March 2000, a mammoth tabular ice island 31,000 km², around the size of Belgium and the world’s largest recorded iceberg was calved from the Ross Ice Shelf. Although it’s not unusual for such frozen mantles to give birth to large icebergs, it would appear this process is accelerating. An US Geological Survey report found in 2010 that every ice front in the southern part of the Antarctic has been retreating overall from 1947 to 2009. The most dramatic changes have taken place since 1990 including the disappearance of the Larsen A and B ice shelves. There has also been a significant loss of ice in glaciers in West Antarctica and where the ice sheet has thinned rapidly. Indeed, as I stood on Antarctica for the first time a huge crack was forming in the Pine Island Glacier which will, if it fully separates produce an iceberg the size of New York.

The peninsula has warmed 2.5°C since 1950, making it one of the fastest warming places on earth. As the planet warms with CO2 and great slabs of ice break off, Antarctica becomes less effective as the planet’s cooler. And given its ice locks in 70% of the planet’s fresh water, it has an immense influence on sea levels, sea temperatures and weather systems. 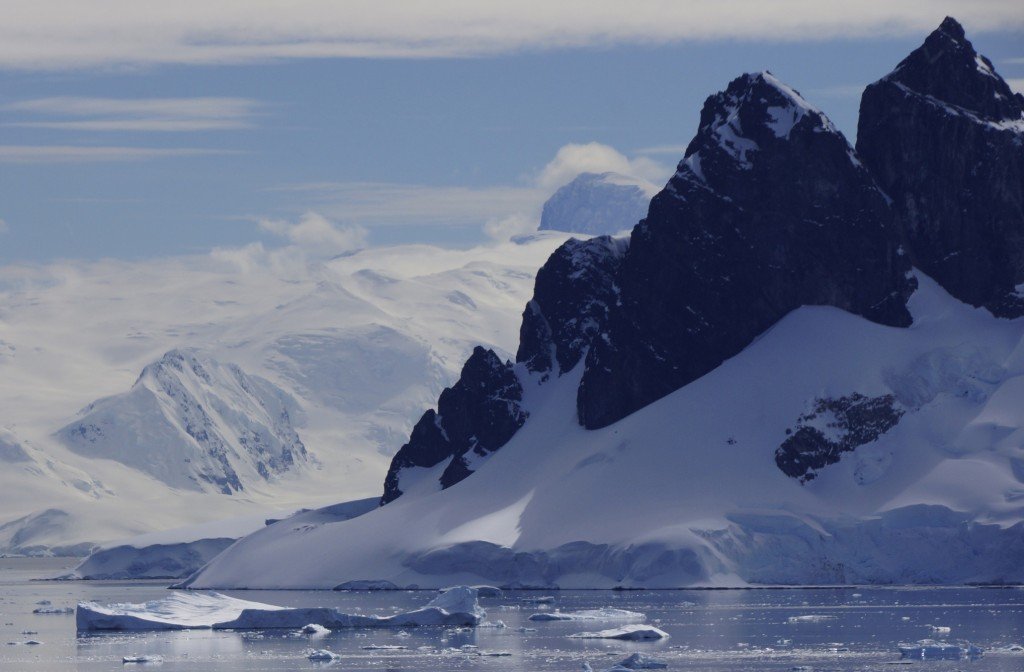 On the evening we set sail for home, at dinner, I asked fellow passenger Ron for his favorite highlight of the trip. Before he could answer, David the expedition leader suggested we take one last look before the continent melted away from sight. I galloped onto starboard deck and at that moment heard a deep bellowing breath that vibrated through my body and saw surface, within touching distance, the arching spine of two Minke whales as they heaved through the waves at my feet. I fancied I even felt the spray from their blow on my cheek. They appeared to my mind, our final embassy from a frozen empire. A small crowd gathered enthralled as the arcs of their bodies faded away. A light mist began to close in around the opalescent peninsular, celestial gates closed in our wake shrouding the enigmatic realm once more. A couple of us hugged, overcome with emotion.

Back at dinner, Ron and I assumed our places at the table. “That, yes, I think that must be one of them” he said with a big grin and I remembered the question I had put to him. We raised our glasses and bid the precious kingdom and all its finned and winged denizens farewell.

I could never imagine Antarctica other than benign and luminous. But how long could she hold out against the warm embrace, so welcoming to the traveler but nothing more than an unrelenting death clutch to a frozen continent; and it brought back the words of Chief Seattle…

“This we know, the Earth does not belong to man, man belongs to the Earth. All things are connected like the blood, which unites us all. Man did not weave the web of life, he is merely a strand of it. Whatever he does to the web, he does to himself.”

Based between Madrid and London, Laura is passionate about nature and seeks to highlight through her travel experiences the environmental issues facing the planet as well as the connectedness of all living things. She has written for a number of publications including: Dorling Kindersley, El Pais Ingles, The Ecologist and The National.